At last Croatia is being recognised as an ideal holiday destination. Laze in one of its many seclude coves that fringe an azure sea, walk on its majestic Biokovo Mountain or stroll through the narrow, cobbled streets of is historic towns and villages.

Croatia by the Sea

Both the Istrian Peninsula and the coast of the region of Dalmatia in Croatia both offer delightful resorts built by beautiful sea shores fringed with fragrant pine forests. The Istrian Peninsula is dotted with resorts that today seriously challenge the popularity of more established sun holiday favourites such as the Costa del Sol in Spain. Umag in north Istria is one of them.

Umag is a town of two parts. Stretching around a pretty bay one side features beaches, coves and forest trails. On the other side the old town Umag occupies a small peninsula stretching out to sea. These two distinct areas are connected by a wide promenade ideal for walking and cycling. For the not so active there is also a regular tourist train service. Wandering through the narrow streets of the old town visitors will find an interesting mixture of Gothic and Renaissance architecture and two medieval churches. A row of restaurants facing the open sea on the far side of the peninsula are the ideal place for a leisurely meal cooled by a gentle breeze. 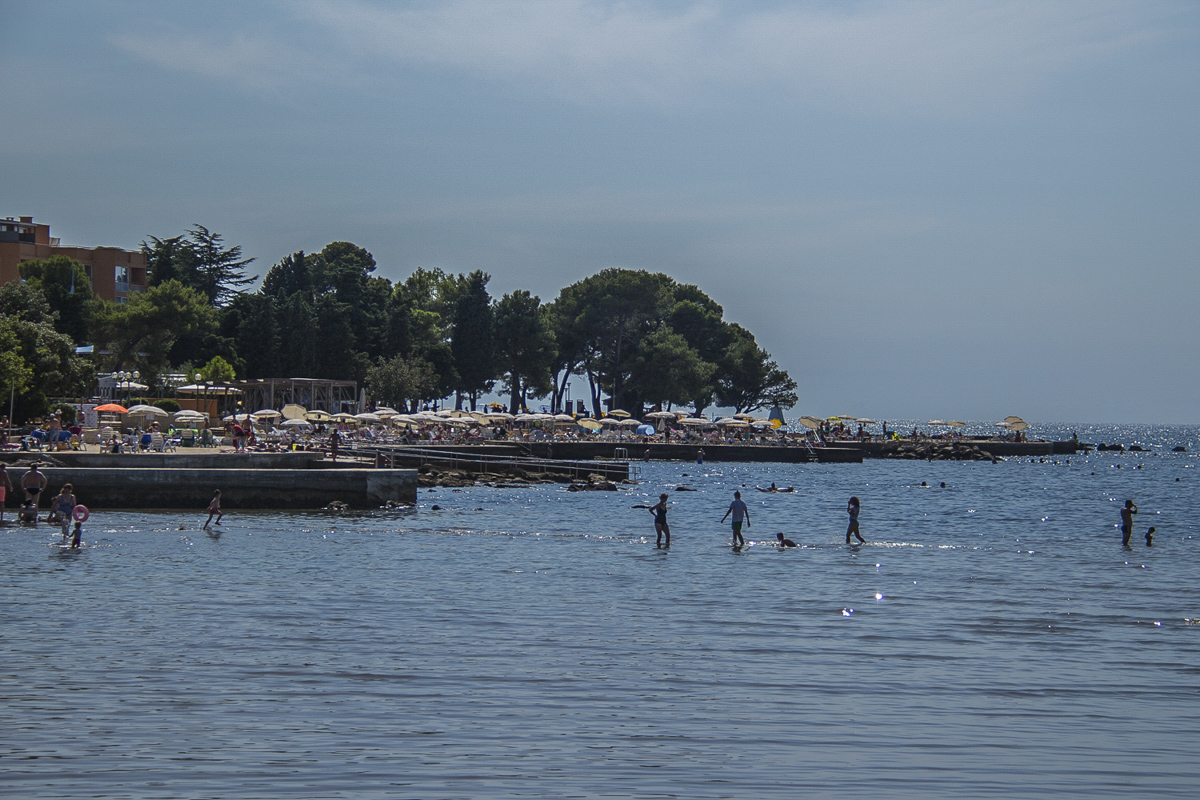 Vodice in the region of Dalmatia sits in the centre of a small bay. Throbbing with life in mid-summer it is a quiet, restful resort in spring and early autumn. This resort has a large natural, pebble beach and sunbathing platforms linked by bridges offering swimmers and easy access to the water. 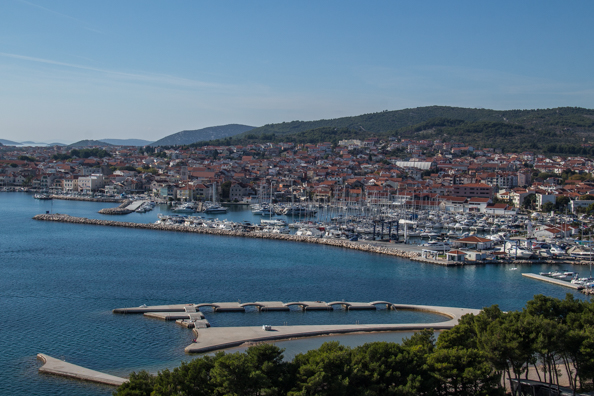 Regular ferries from the little port call in at the islands of Prvic and Zlarin and terminate at the historic town of Šibenik. Vodice is also close to the fabulous Krka National Park. This park features lakes and waterfalls of the Krka River as it flows through a dramatic karst landscape. Amazing natural landscapes clothed in natural forests with pockets of wetlands and grasslands plus some historic buildings all add up to a great day out. 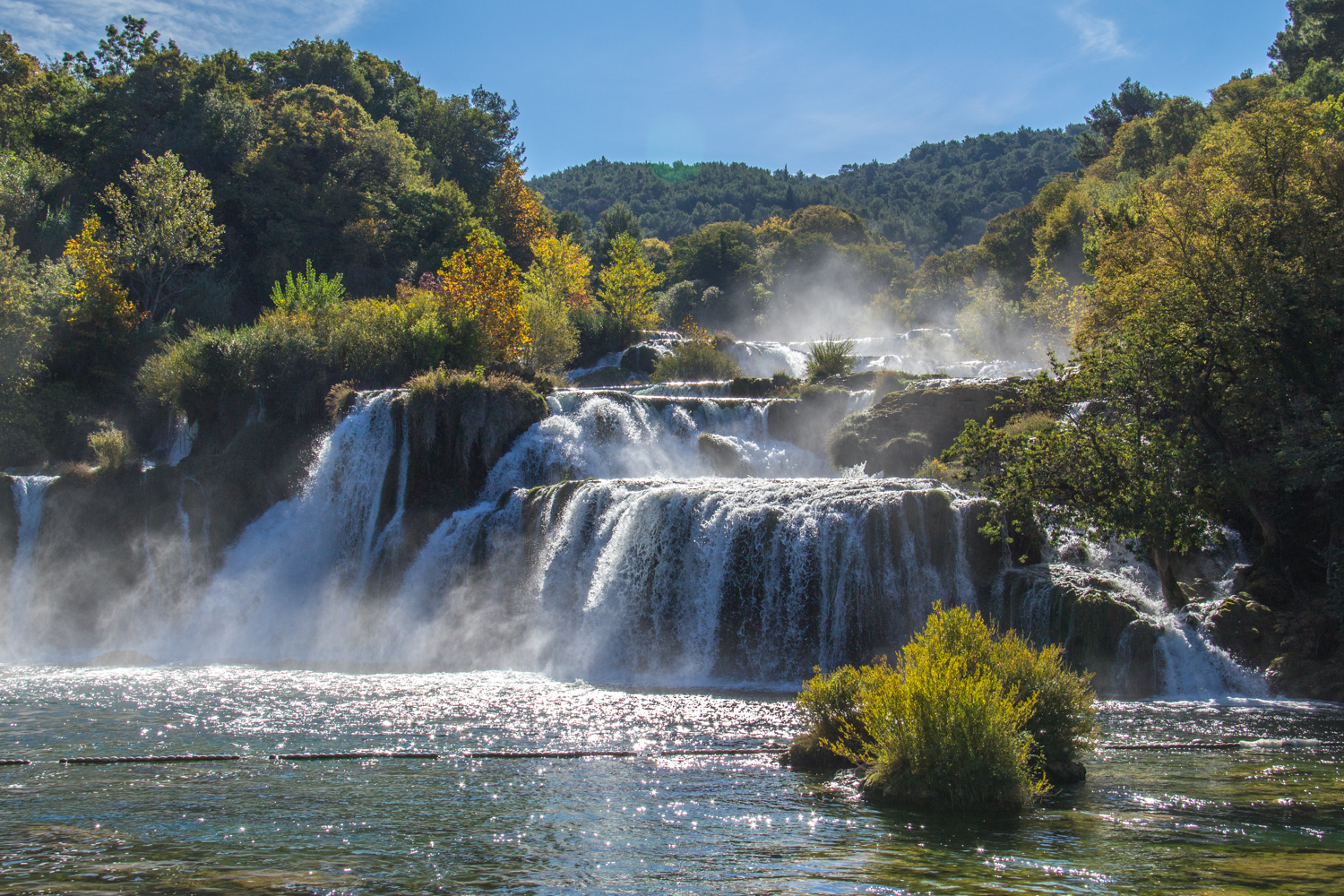 Croatia on a Mountain

Looming over the pine forests on the Makarska Riviera the paths on Mount Biokovo, in a natural park of the same name, offer exciting trails for walkers of all standards.

From the peaks of Mount Biokovo anyone getting up there on foot or by car can enjoy fabulous views over the coast below them and the lovely town of Makarska. Biokovo is not just one peak but a limestone landscape of peaks and troughs dotted with small villages and isolated churches on its extensive lower slopes. The peak of Sveti Jure or Saint George is the highest peak on Biokovo and the second highest peak in Croatia. Marked trails include the legendary Bride’s Rock and Napoleon’s Road. The latter was started by Napoleon to aid the movement of his troops but he never finished it. Every walk is an adventure here. The town of Makarska features some easy walks around the two peninsulas on either side of it. It is also the ideal place to stay while exploring the Makarska Riviera. 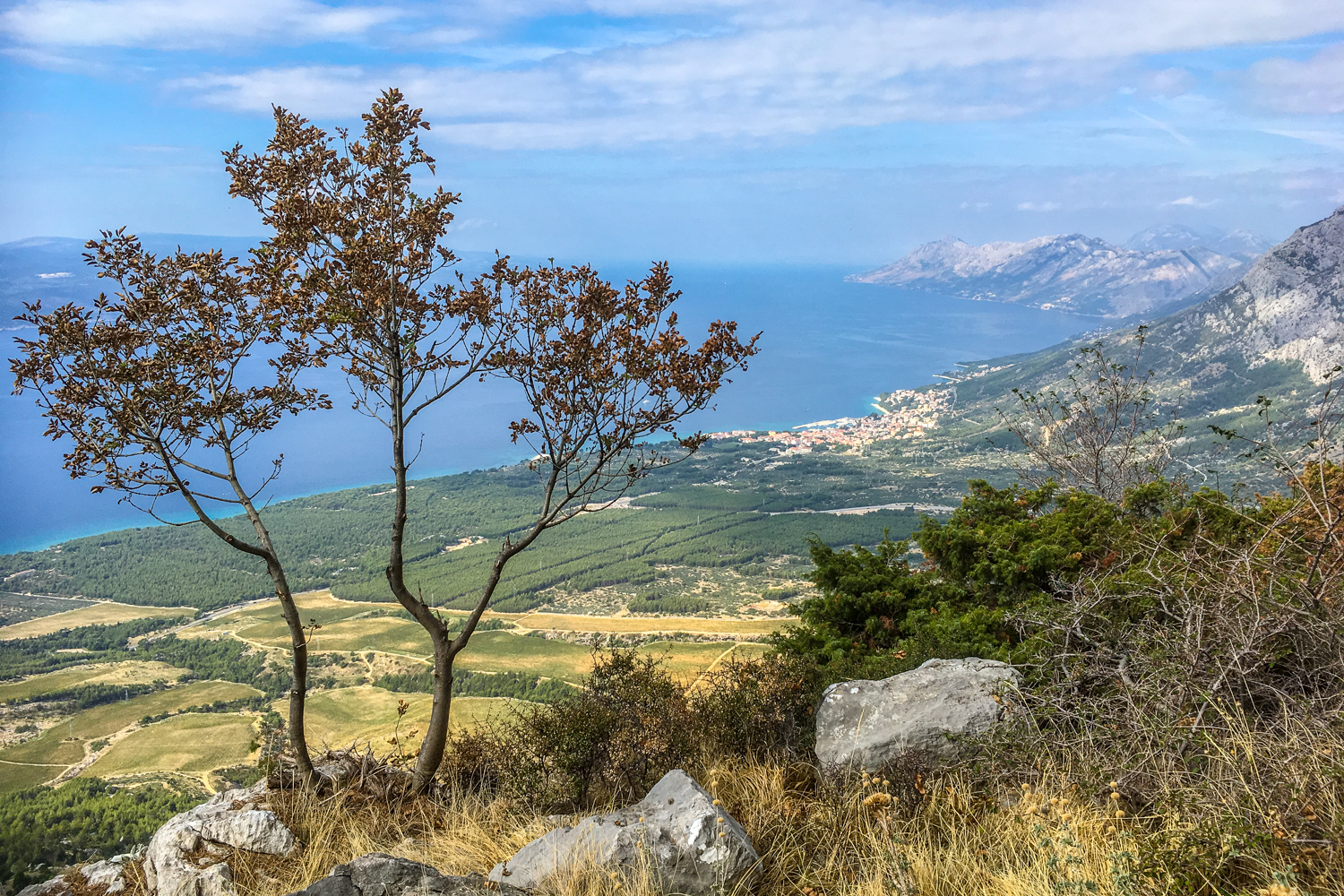 Croatia in the City

Dalmatia is a very distinct, historical region of southern Croatia.  It comprises the central coastline of the country, hundreds of islands, mountains and a plethora of diverse settlements all worthy of a visit.

Visitors flock to the beautiful city of Dubrovnik which became a UNESCO World Heritage Site as early as 1970. Best visited in the afternoon when the cruisers have returned to their ships visitors can stroll around a complete circle of its medieval walls. Other attractions include the impressive cathedral dedicated to Saint Blaise, an old pharmacy, a daily market and the busy old port surrounded by restaurants. Watching over the town is the eleventh century Lovrijenac Fortress accessible by cable car. There is plenty to enjoy in this town which is easily accessible from nearby resorts such as Mlini and Cavtat. 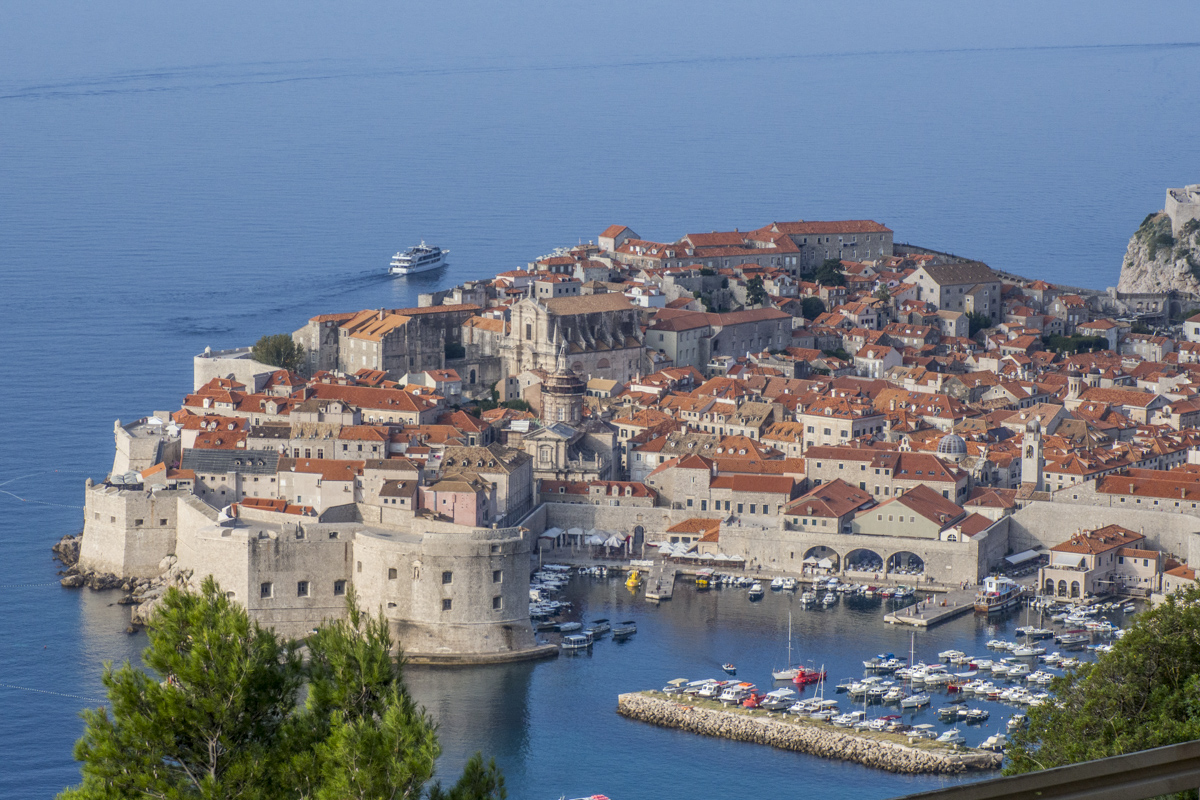 Split stretching along a wide promenade worthy of any classy French resort is the second largest city in Croatia. Indeed, this town was established by the French around Diocletian’s Palace built by the Roman emperor of the same name as his own residence. This huge palace is open to the public and merges into the old town. Visitors to the palace will no doubt be enchanted by male groups performing multi-part songs. These traditional songs in the UNESCO protected klapa style are regularly performed here. Another highlight of Split is the Marjan Hill that rises up above the town. The pleasant walk to the top is rewarded by glorious views over the city below. 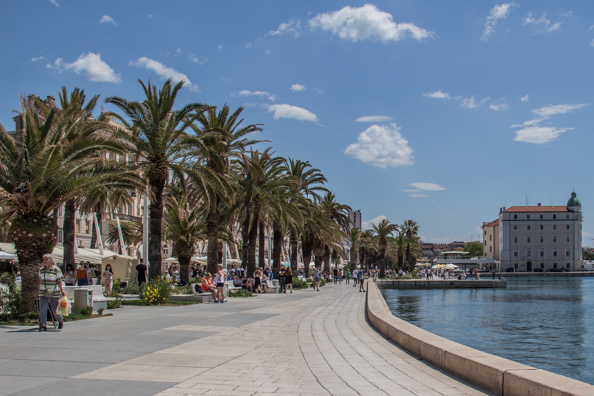 The old town of Trogir occupies its own island. The top of the bell tower of the Cathedral of Saint Lawrence is a great place to view the entire town. However, it is not an easy climb to get there. This vantage point overlooks the main square of the town which was originally the Roman forum. It is surrounded by buildings that go back as far as the thirteenth century. Still surrounded by its old walls the town is entered through one of two gates, the Land Gate and the South Gate. The South Gate still has its wooden doors. Beside this gate is the Small Loggia where citizens who missed the curfew and got locked out would spend the night. This was built as a shelter for those who missed the curfew and got locked out of the city at night. Outside the walls parks and gardens offer a pleasant retreat from the maze of narrow, cobbled streets. Pleasure boats bob on the narrow channel that separates the old town from the mainland which also features the local market. 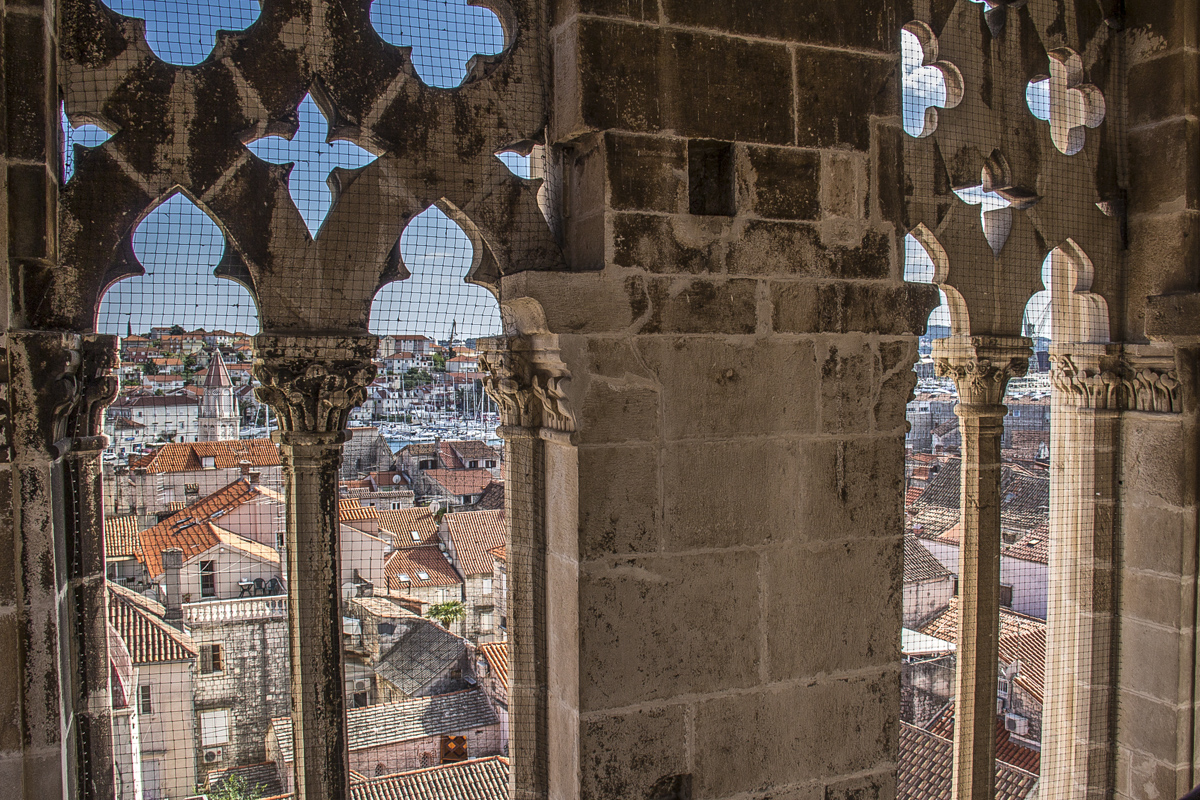 In a country that has been under the rule of different races Šibenik is renowned as the first town to be founded by a Croatian ruler namely
King Petar Krešimir. Hailed as a hero his splendid statue dominates a small park dedicated to Roberto de Visiani, a Croatian botanist, poet and philosopher. The old town lies beyond Poljana, the modern hub of the city. This square, outside the walled town, was once the venue for horse races and archery competitions. The old town is characterised by narrow streets lined with tall buildings and linked by arches, alleyways and stone steps. Medieval churches are a regular feature in this fascinating area including the massive Cathedral of St James. The rare Medieval Mediterranean Garden of the Saint Lawrence Monastery is delightful and the only one in Croatia. Three fortresses still stand guard over the town. The eleventh-century Fortress of Saint Michael above the old town is now a major venue for festivals and other events. 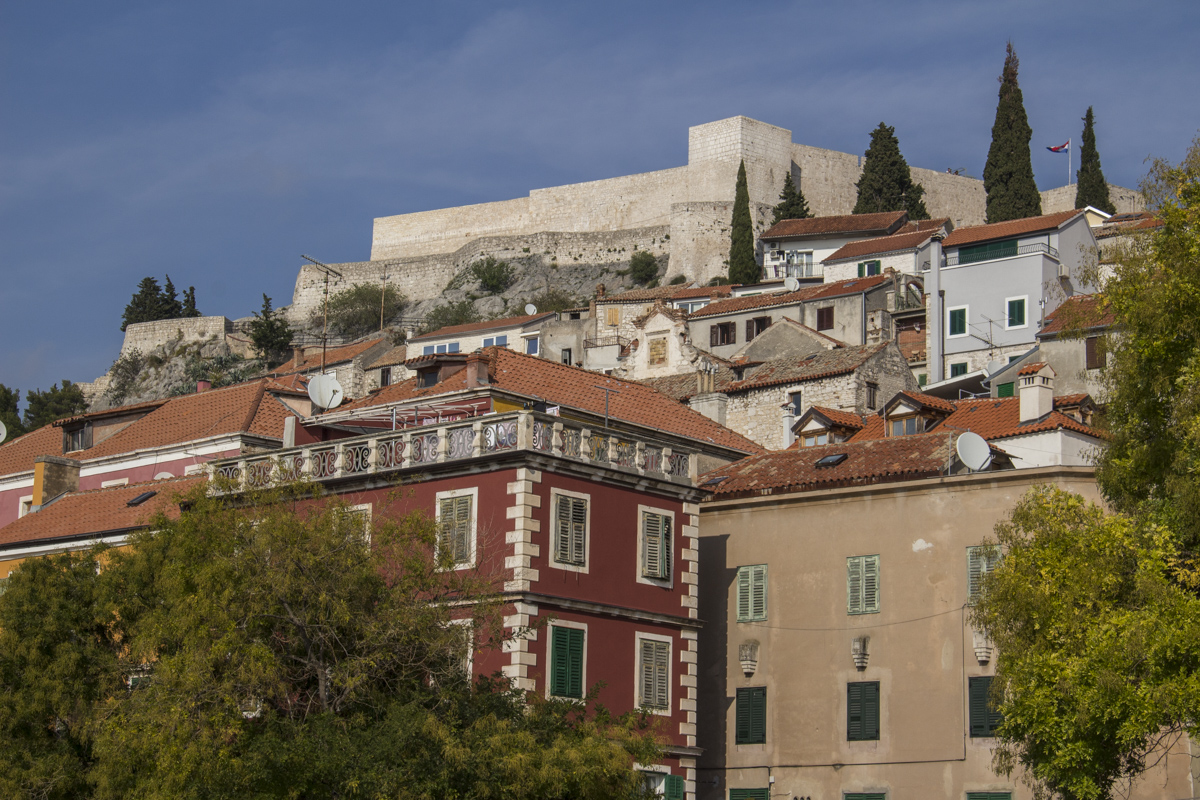 Nestling on the banks of the Cetina River, the small town of Omis is famous for its pirates or corsairs of Omis. They tyrannised the local seas from the fortresses above the river mouth. The short climb to the top of the lower fortress will demonstrate just how commanding its position was as a stronghold and a look-out. These pirates were once the most powerful and fearsome pirates in the whole Mediterranean Sea. A position that depended on alliances with their neighbours who guaranteed safety from land-based attacks. Their reign ended when they were finally subdued by the Venetian Republic as they fought the Ottomans for control of this area. Omis has a beautiful sea front featuring a small marina, an extensive beach and a tree-lined promenade. 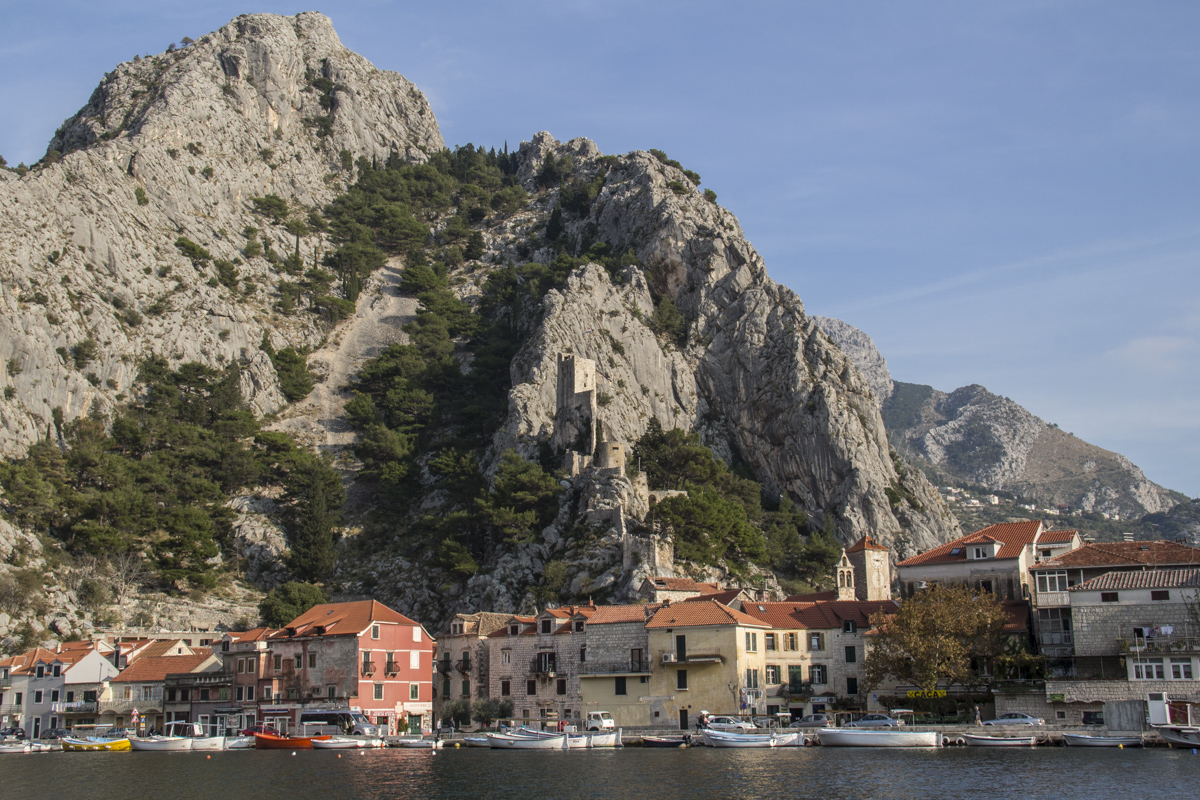