Šibenik, the Town of King Krešimir, in Croatia

Everyone needs a hero. For the inhabitants of Šibenik in the Dalmatia region of Croatia it is the Croatian King Petar Krešimir Hailed as the founder of the city there is some doubt about this accolade. But there is no doubt that this energetic king who ruled from 1059 until his death in 1074 was associated with this city. He mentions it in a proclamation made in 1066. Close to the sea front, presiding over a small park, is a splendid statue of the king. This park is dedicated to the botanist Roberto de Visiani, a recognized Croatian botanist, poet and philosopher, one of the founders of modern botany in Italy. The fountain in this square bears his name. 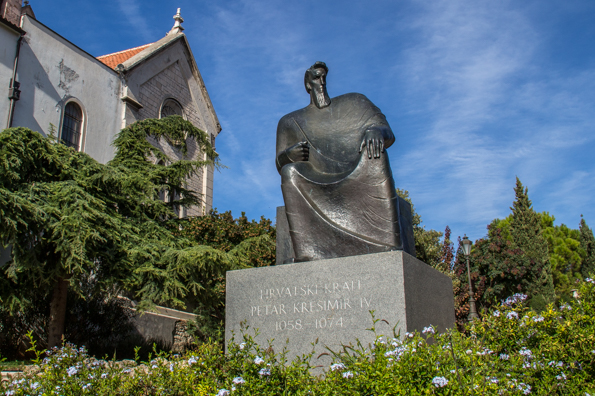 On the far side of the park I entered the modern hub of the city, Poljana. Originally this square was an open space outside the walled town. Horse races and archery competitions used to take place here. On one side of the square is Šibenik Theatre. Built in 1870 this theatre was patronized by the Emperor of Austro-Hungary, Franz Joseph, when Croatia was part of his kingdom. Today it hosts the Croatian National Theatre. A contemporary building opposite this theatre is occupied by the public library. This building incorporates part of a buttressed sixteenth century bastion. In a niche on the side of this bastion is a statue of the Archangel Michael the protector of the city. 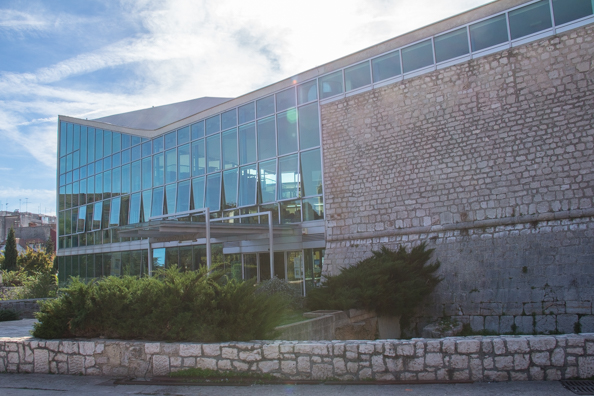 When I left the main square I made my way into the old town a delightful mixture of arches, alleyways and flights of stone steps. The narrow streets are lined with tall buildings. This ensures shade in the hot summers and shelter from a fierce winter wind. Time is not of the essence as far as the locals are concerned and I passed several bars where clusters of men were gathered taking their time over a cup of coffee. As I wandered I noticed two small stone bowls set into the wall of a house. One had the inscription ‘Amor de Cani’ or love of dogs. These bowls were not to quench the thirst of the local dogs and cats but to ward off small animals suffering from rabies as it was believed they had a fear of water. 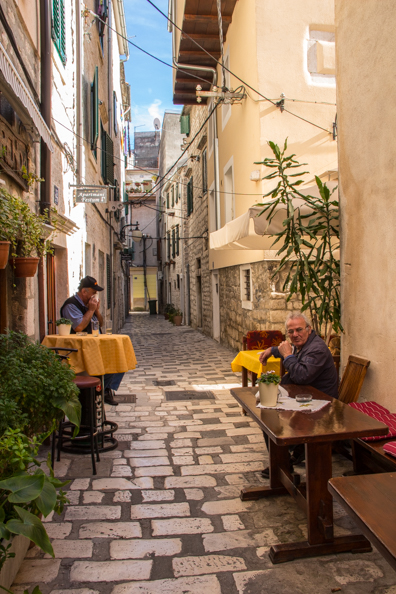 Medieval churches abound in this area. One good example is the Church of Saint John, or Crkva Svetog Ivana. Built during the fourteenth century it is notable for a balustrade stone staircase and a four-storey belfry with the town’s oldest mechanical clock at the top. The little church of Saint Barbara, a small Gothic church is now a small museum exhibiting important paintings from the fourteenth to the seventeenth century. 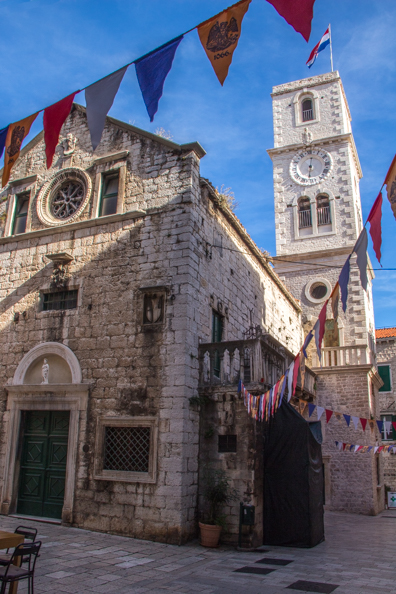 Palazzo Gogala is an impressive residential building in the old town. It was created by merging several houses together and represents different styles of architecture. Fifteenth century Gothic style is represented by single light windows on the eastern corner of the complex. The large windows and a large stone balcony with a stone balustrade overlooking the Square of the Republic of Croatia are Baroque and were built during its reconstruction. The northern entrance is characteristic of the Renaissance period. The mayor of Sibenik used to live in this palazzo when Napoleon ruled Dalmatia. Apparently the mayor’s family occupied one wing while his mistress lived in the opposite wing. And all under the watchful eye of the town’s cathedral! The palace is perched above the old Town Hall. The original town hall, built during the sixteenth century was destroyed during the Second World War. After the war it was restored in its original form and now houses the Vijećnica café-restaurant. The first floor still looks as it did when the town council used to meet there. 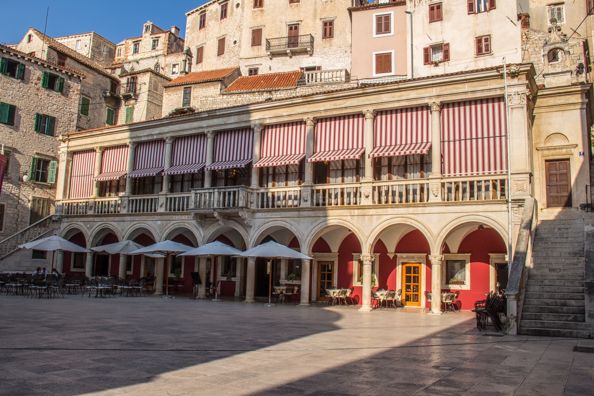 I went down the steps beside the old Town Hall to visit the Cathedral of St James, Katedrala Svetog Jakova a building as old as the town itself in the sense that it was started in the fifteenth century but not completed until the mid-sixteenth century. The cathedral has been recognised by UNESCO – as a world heritage site due to some innovative features it incorporated. These include a barrelled roof and a huge cupola both constructed using interlocking slabs of stone. An unusual feature, around the outside of the apse are seventy-one stone heads that seem to just pop out of the wall. They are thought to represent acquaintances of the sculpture Juraj Dalmatinac who was involved in the decoration of the interior of the cathedral – a feast of late Medieval and early Renaissance sculptures. 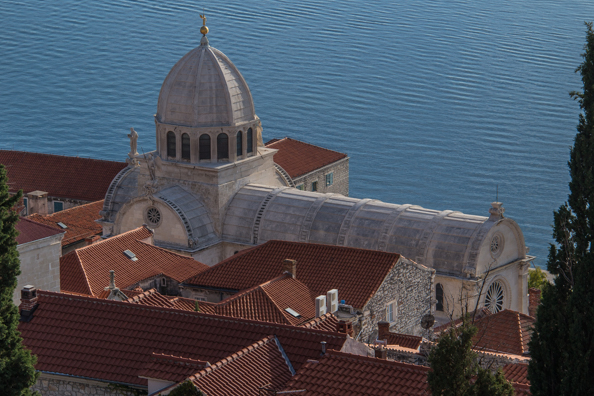 A little gem in the old town is the Medieval Mediterranean Garden of the Saint Lawrence Monastery. commonly known as the Garden of Saint Lawrence. This beautiful little garden had lain forgotten for a hundred years until it was restored and opened to the public in 2007. The restoration was done by the Šibenik Private High School under the direction of Dragutin Kiš a well-known landscape architect. The garden follows an established medieval design and is very rare as it is the only one in Croatia and there are only a few others throughout this part of Europe. 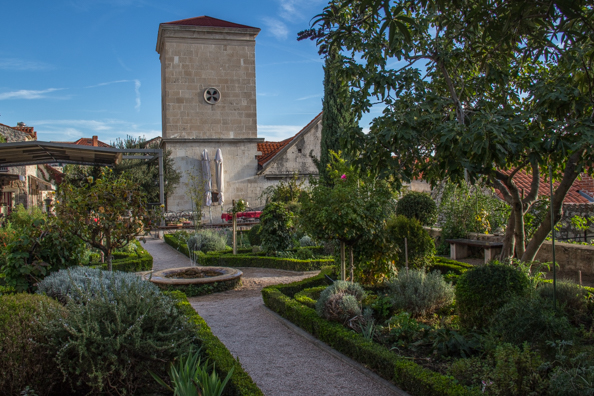 Fortresses and towers are a magnet to me and my next objective was the Fortress of Saint Michael above the old town. This fortress is thought to go back to the eleventh century, the reign of King Petar Krešimir IV. But most the construction that can be seen today is thirteenth-century stonework and additions made by the Venetians who once ruled the town. Its double wall snaking down the hill towards the sea is particularly impressive. This wall would have served two purposes, defending the town from all directions and also preventing possible retreats via the port below. 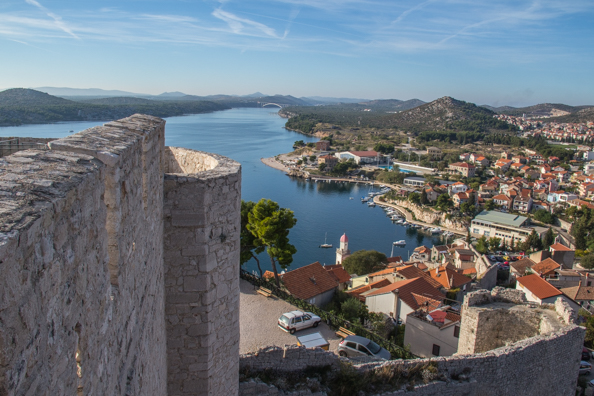 For many years the fortress was abandoned but a huge restoration, completed in 2014 has turned it into a major festival venue hosting a variety of events featuring national and international performers. Particularly impressive is the open-air theatre on the top. 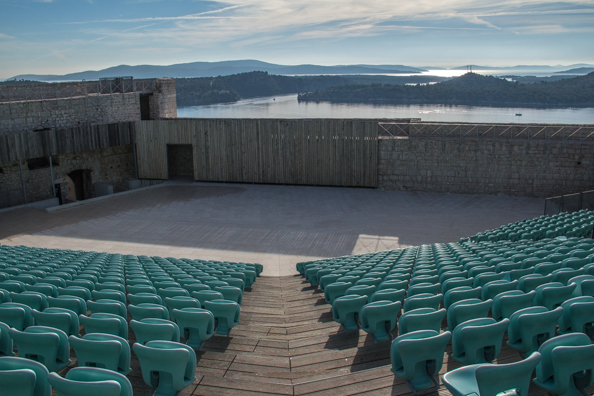 This fortress is one of three in the town. I could see another one from its ramparts. The Barone Fortress (also known as Šubićevac) stands proud on the crest of an escarpment behind the town. It was built during the seventeenth century when the Venetian and Ottoman armies were waging war throughout Dalmatia. Sibenik was on the front line. Recently this fortress has also undergone extensive renovation and has evolved into a unique tourist attraction re-creating important historical events using modern technology. 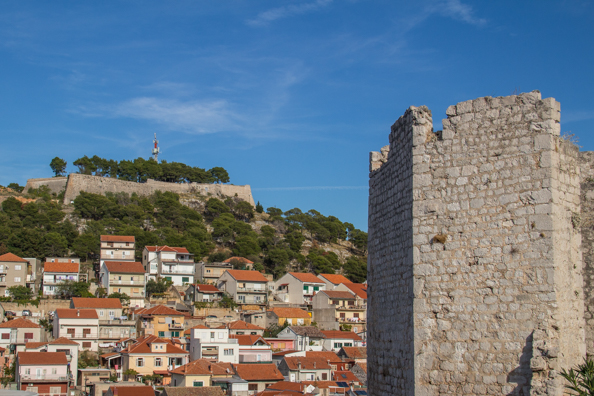 A third fortress, Saint John’s Fortress, is a short distance west of the Barone Fortress. This fortress has not yet been renovated and remains a favourite walk for the locals to enjoy the views across the city and the sea. Part of this fortress was used as a set for Game of Thrones which may entice visitors there as well. There are plans to develop this fortress in the future as the stage in Šibenik’s ongoing fortress revolution. The fourth fortress, Saint Nicholas’ Fortress, is out at sea. It was built by the Venetians at the entrance to Saint Anthony’s channel. This narrow waterway is between the bay of Šibenik and the open sea and control of this channel was vital to the defence of Sibenik and its hinterland. This very attractive complex was designed by the Italian military architect Michele Sanmicheli. As I left Šibenik on the ferry I had a good view of this fortification and could not help wondering how, or if, it could be incorporated in the current fortress revolution. Maybe it is best left as it is for walkers and cyclists to enjoy its stunning maritime position.

Getting there
I visited Šibenik during a trip organised by Solos Holidays. We flew from Gatwick to Split with Norwegian Air.