The Ancient Pirate Stronghold of Omis in Croatia

I arrived in Omis in the Dalmatia region of Croatia by boat. The Cetina River has played a vital part in the history of the town. The famous pirates or corsairs of Omis would seek shelter in the river’s estuary after plundering the surrounding coastline. I was not sailing into town in an elegant galleon but chugging along in a little pleasure boat. Nevertheless, I was enjoying the same scenery. Across the water the reed bowed and straightened at the command of a light breeze. Above me the bare grey rocks of mountain peaks glinted in the sunlight skirted by trees of deciduous forests. Perched on these rocks I could see the old defences of the town, two imposing fortresses. 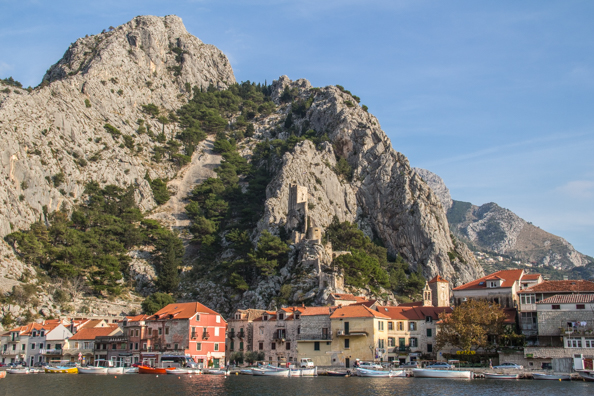 After disembarking I crossed the bridge over the river and headed straight for the sea front. This little town is sandwiched between its river and Croatia’s Adriatic Coast making it both vulnerable and impregnable depending on its relationship with surrounding neighbours. During the Middle Ages the pirates or corsairs of Omis were infamous. Their ships, built for attack and flight, would plunder the coastline before fleeing to the shelter of the river estuary. This estuary was guarded by a strategically placed fortress. This estuary was guarded by a strategically placed fortress, Fortress Mirabella also known as Peovica. From this fortress the pirates could see ships approaching and would quickly set sail to plunder them. They became one of the most powerful and fearsome pirates in the whole Mediterranean Sea. Their success depended on alliances with their neighbours which guaranteed safety from land-based attacks and it continued for three centuries. 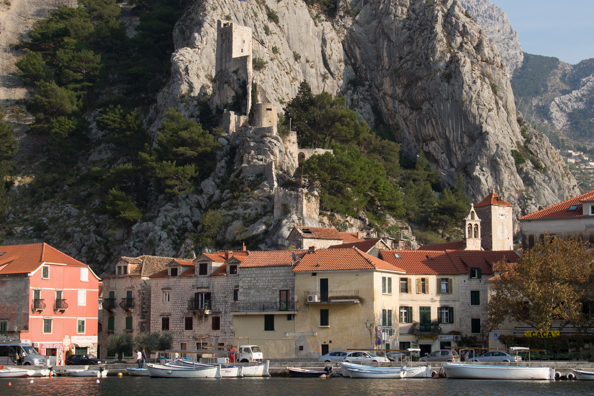 They became one of the most powerful and fearsome pirates in the whole Mediterranean Sea. Their success depended on alliances with their neighbours which guaranteed safety from land-based attacks and it continued for three centuries. When the province of Dalmatia was conquered by the Venetian Republic in 1420 Omis remained fiercely independent. But, alone against the powerful naval force of the Venetian Republic and threatened by attacks from the Ottomans on land Omis finally came under Venetian rule in 1444. This marked the end of piracy on the Adriatic Sea. Omis is peppered with monuments to this period of prosperity and fame. Above me, as I strolled along the promenade I could see the Fortress Starigrad or Fortica straddling the top of the mountain above me. This fortress was built when the Venetians were in control and invasions by the Ottomans were a constant threat. Not only was it a good lookout post it was also a retreat for the citizens of the town in the event of an attack. It takes about forty minutes to walk up to the fortress from the town. Its strategic position offers the visitor great views across the sea and the surrounding countryside. 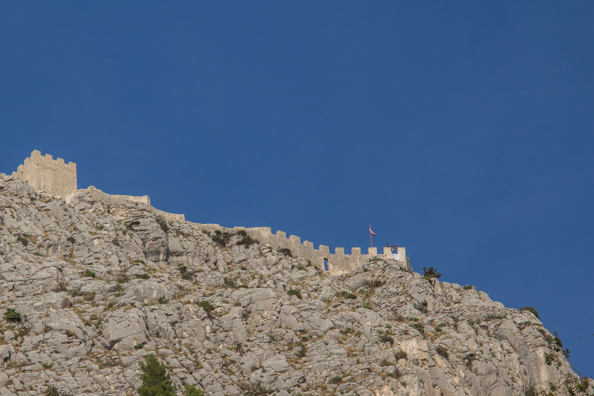 Omis has a beautiful sea front that features a small marina and an extensive beach. A tree-lined promenade provides a pleasant, shaded walk along the coastline. This promenade was built where once a moat protected the southern city walls that no longer exist. At the town end of this promenade is the Homeland War Veterans Memorial. The Homeland War was fought thorough Croatia to liberate Croatia from the old Yugoslavia and thousands lost their lives in the struggle for independence. 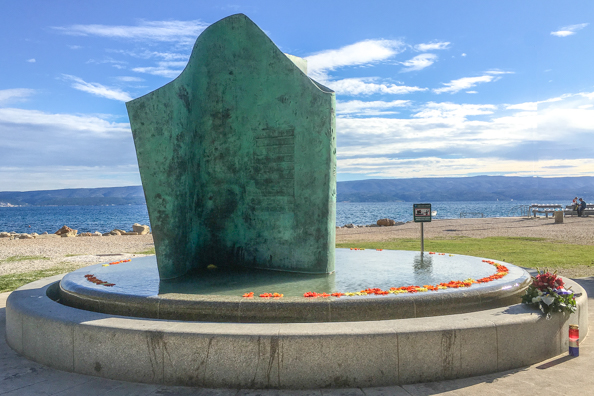 After exploring the beach area, I decided to visit the old town. When I reached the start of the main road through the old town I noticed a small church in wooded grounds behind me. I turned back to investigate. This church was built in the early seventeenth century by the Deškoviæ and dedicated to Saint Luke the Evangelist. Built on the communal ground of the cemetery, just outside the city walls, it was intended to add a touch of nobility to the cemetery. Sadly, the modest exterior in Gothic style did not impress and it never achieved a position of importance in the religious tradition of the town. It now sits shuttered and silent in the overgrown cemetery. 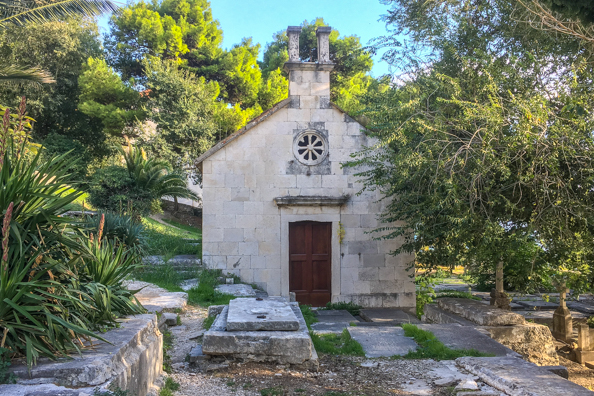 Omis was originally a walled city and I entered the old town through the only surviving original gate, the East Gate. This gate is at the sea end of the Pjaca. The inscription above this gate (1682) suggests that it was built when the Venetians ruled the town. This gate is at one end of the main street through the old town, Pjaca. This street stretched from the East Gate to the West Gate also known as the River Gate. During the fifteenth and sixteenth centuries it was the main street through the town and very busy. As the town expanded beyond the old city walls this is no longer the case. 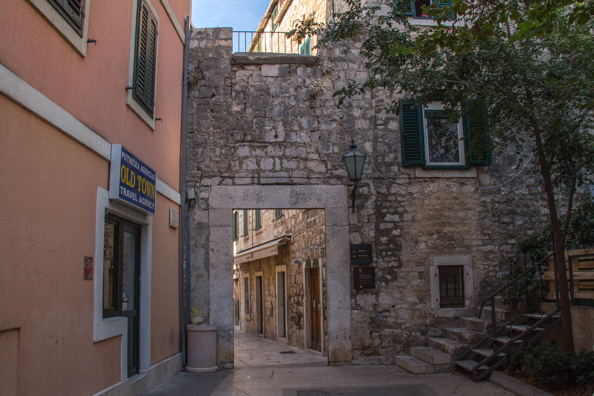 I followed Pjaca to the main square of the town, Trg Svetog Mihovila. This busy square is surrounded by cafés and restaurants and dominated by the parish church of Sv Mihovil (Saint Michael). This church replaced the original medieval church which was too small for a growing population. This church was completed in 1724. Architecturally, it is probably the most interesting building in Omis due to the combination of Gothic, Renaissance and Baroque styles. The interior is decorated with interesting artistic and valuable objects. 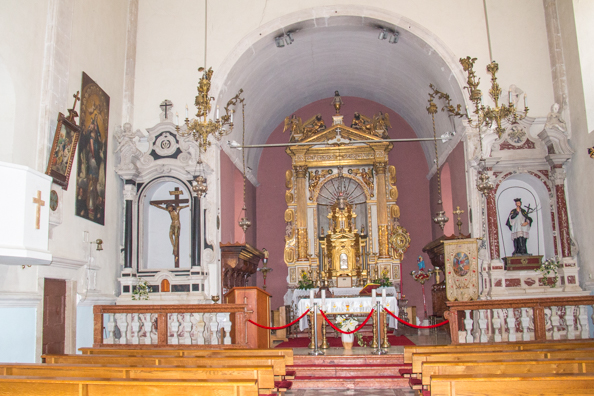 The narrow streets and small squares of the old town make it very difficult to take photographs of the buildings and I started reversing up some stone steps to try and find a good place to get an image from above the church. This proved to be very difficult and I kept climbing higher and higher until I finally succeeded. 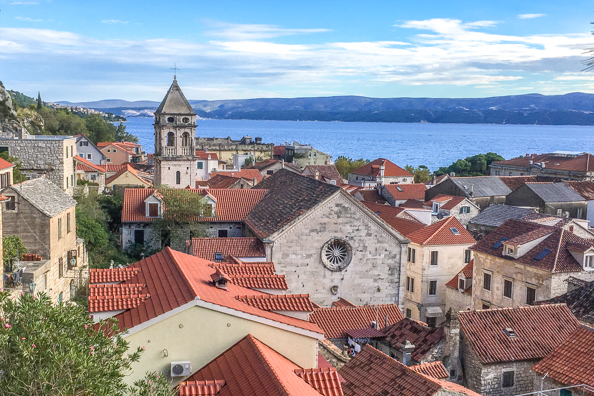 When I looked behind me I discovered I was almost at the entrance to the Fortress Mirabella. It seemed I did not have much further to go to get to the top so I decided to go inside. I was wrong. The first flight of stone steps led to a small viewing platform. From this platform several steep, narrow flights of high steps led to the very top. It was a challenge as the steps were not built for short legs like mine. This system was a good defensive ploy as invaders would not be able to take the stairs very quickly and were vulnerable to attack from above. The views from the top were amazing. From there I identified a few churches I had not found on in the old town. 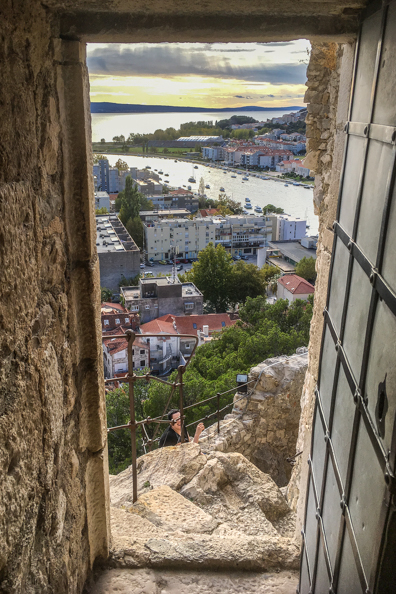 Back in the old town I found some more interesting places. In particular the House of a Happy Man. A beautiful Renaissance house that got its name from a Latin inscription above the entrance. There is not much information about the original owner but the house has been well preserved over the years. Today it is one of the most beautiful examples of classic Dalmatian architecture from the Venetian period. I also discovered the Clock Tower, the Church of Saint Rocco and the Church of the Holy Spirit all crammed together around one small courtyard. Finally, on the bank of the river I found the Pillar of Shame. By then it was getting late and time to get back to my bus. I did not want to be tied to the pillar of shame and pelted with rotten vegetables for being late. 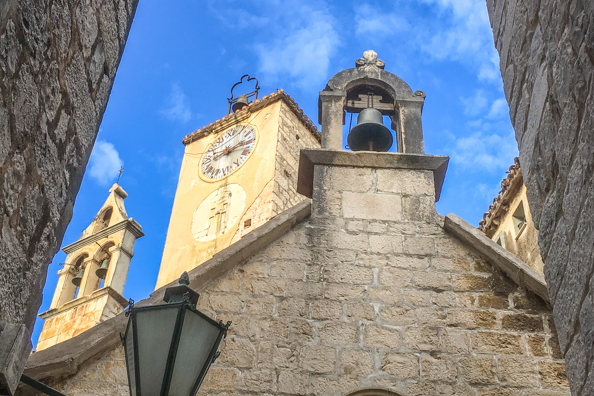