By the Seaside in Umag on the Istrian Coast of Croatia

When we arrived at our hotel, Sol Umag, in Umag on the peninsula of Istria in Croatia we were too early to check in. We were directed to the Pool Bar where we could get drinks and snacks. Outside we found ourselves right on the sea front, just a band of shady trees between us and the water. A cool breeze soothed our travel creased brows and we finally relaxed. No wonder Roman noblemen made this beautiful Adriatic coastline their holiday destination. 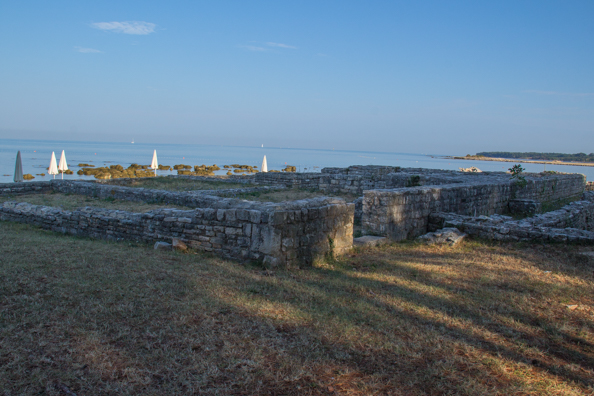 In early Roman times, a large number of luxurious villa rusticas (countryside villas) were built along the coast north of Umag from Zambratija to Katoro. Zambratija is now known as Savudrija. This small fishing village is a good walk from Umag along the rugged coastline and through shady pine forests and flat all the way. Katoro has been incorporated in Umag’s twenty kilometre rivieria and is one of its best beaches. It is also the site of the remains of a Roman villa. This villa was built on an island and connected to the mainland by a causeway but it is still possible to walk across the causeway at low tide. On the same stretch of coastline are the better preserved remains of another Roman villa, Villa Tiola, a luxury villa that also boasted a spa. In the same area there are the remains of other seaside villas with mosaic floors and on the seabed around Katoro there are the remains of quays and jetties. Nowadays it is hard to believe that at one time Katoro was more important than Umag. 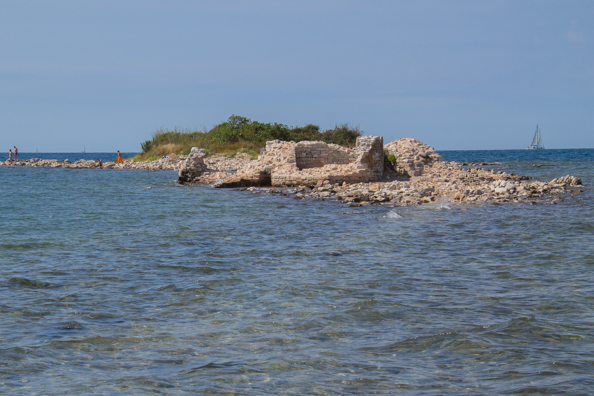 Various empires controlled Istria after the collapse of the Roman Empire and then in the late Middle Ages Umag was one of the first towns in the region to accept the rule of the powerful Venetian Republic and it remained a part of this republic until its collapse in the late eighteenth century. The luxury and glamour of those times is mirrored in the Venetian houses located in the old town of Umag. 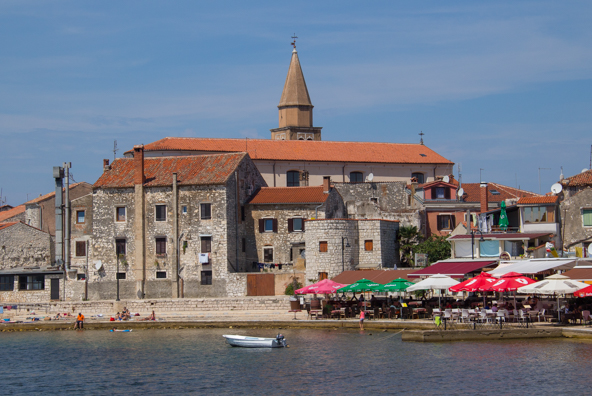 There followed periods of depopulation due to both warfare and frequent outbreaks of the plague and malaria. During the last two centuries of Venetian rule settlers arrived from the Balkan Peninsula, mainly Greece, Albania and Dalmatia and pirates were known to have raided the town and abducted some of its inhabitants. After the collapse of the Venetian Empire the town was absorbed into the Austro-Hungarian Empire and then eight years later, in 1803 it was occupied by Napoleon’s army. But this occupation was short-lived and following its defeat by the English who set fire to the town. Umag once again became part of the Austro-Hungarian Empire. It remained part of this Empire until the First World War after which it came under the rule of the Kingdom of Italy. After the Second World War the border issue involving the Free Territory of Trieste was not resolved until 1954 when Umag was given to Yugoslavia. When Yugoslavia collapsed Istria, including Umag, became part of Croatia. It was soon after this accession that the town became a popular tourist destination and rapid development took place along its coastline. 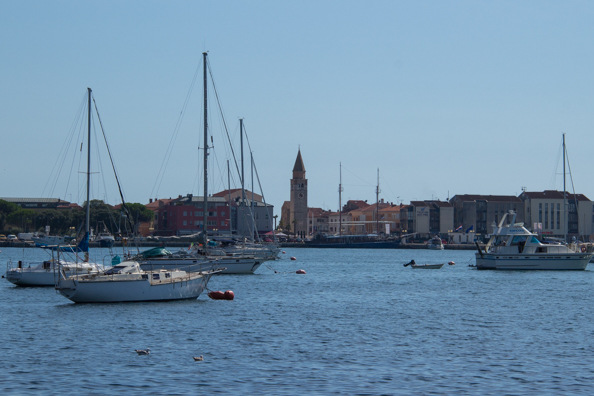 On first sight Umag may seem quite ordinary until you discover its old town crammed on the end of the peninsula it occupies. The original settlement was built on a narrow island and as the settlement expanded the island was broadened and extended by earthworks until it joined the mainland. The narrow streets that form the nucleus of the old town is a treasure trove of traces of the history of the town – Gothic and Renaissance architecture and two medieval churches. The little Church of St Roche sits at the entrance to the old town. It was built after the epidemics of the plague. It has a beautiful interior with a painted wooden ceiling that dates back to the eighteenth century. 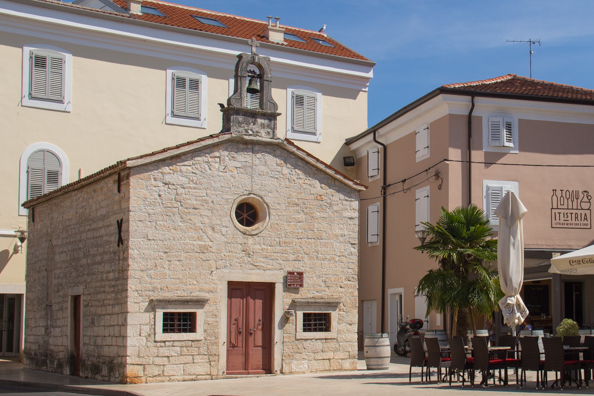 The parish church of The Assumption of Virgin Mary and St. Peregrine, the patron saint of the city of Umag was designed by the architect Filippo Dongeti from Piran. The late baroque façade was never completed. The splendid interior includes a fresco on the ceiling attributed to Giuseppe Bernardino and various altarpieces including fragments of a wooden triptych from 15th century. The Venetian lion on the neighbouring bell tower (1651) was originally found on the city hall which was destroyed by fire in 1924. At the back of this church there is a metal ball, impressed into the wall, reputed to be a cannon-ball fired by a ship from Genova in 1810. Next to the church is the public town cistern that was built in 1677 and renovated in 1780. 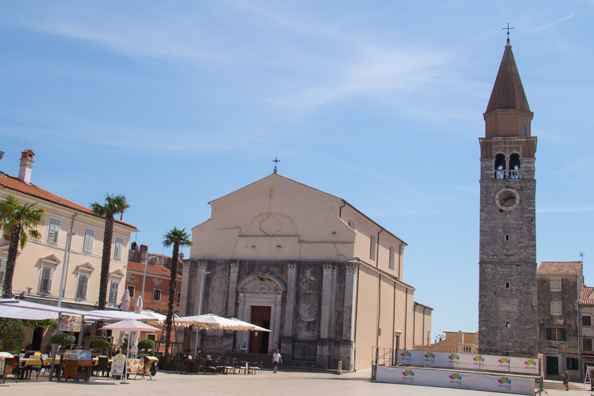 Exploring the maze of narrow streets is a joy. Keep looking up and you will spot inscriptions and carvings on the walls as well as coats of arms and the stone girders with the holes into which metal hooks were inserted to hang embroidered posters to shade the interior from the sun. On the façade of Number 3 Epifanio Street is a Christian sarcophagus that dates back to the fifth century. Intermingled with the old houses are small shops selling souvenirs, local produce and lavender in all shapes and forms. Lavender is grown in the fields around the town. At the far end of the town are the remains of the old city walls and the Town Museum which is housed in a Renaissance defence tower. The museum houses artefacts from the past and also a modern art gallery. A breakwater, built in 1825, stretches for four hundred metres beyond the museum. 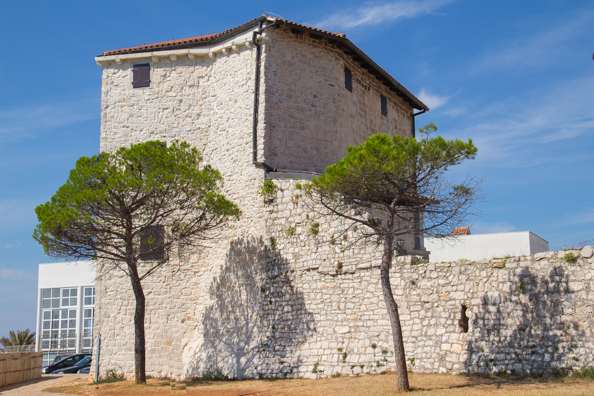 A string of restaurants stretches along the sea front on the other side of the peninsula. My personal favourite is the Amfora Restaurant. Tables on a terrace above the sea offer a refreshing breeze and the soothing sound of the waves caressing the rocks below. A cold beer and fresh, grilled sardines – what more could one ask? 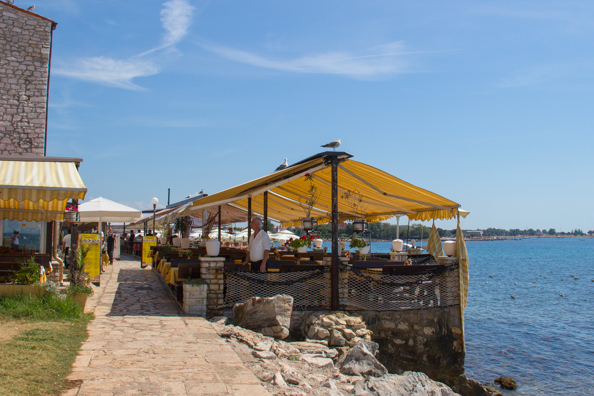 Umag is ideally placed in the middle of its golden Riviera that stretches for twenty kilometres on either side of the town. The rugged coastline is punctuated with different types of holiday accommodation including large resort hotels, apartments, bed and breakfast and camping sites. All within easy reach of one of many coves and pretty bays snuggling into the rocky, tree covered coastline. Many of the restaurants offer an early breakfast so there is no danger of anyone going hungry here.

A regular road train runs along the coast between Umag and the Polynesia Station by Katoro Beach. This service was established in 1971 and soon became a popular tourist attraction as it is a great way to explore the coastline. It is four engines also transport the many spectators who descend on the town for the annual ATP tennis tournament . This takes place in Umag in July and attracts famous tennis players from all over the world. The town also features a large tennis academy. 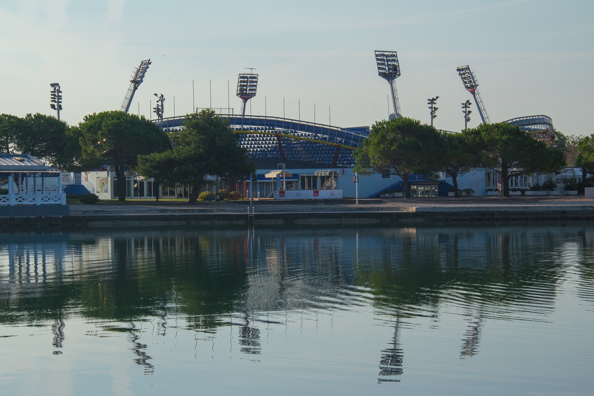 Cycling is a very popular activity here. If Boris Johnson does nothing else of note he will always be famous for his short period bike hire in London or Boris Bikes. These are now found far and wide and are very popular in Umag. Visitors buy a code which allows them to take a bike out for an hour from the stands around the town. For those who want to go further afield there are many places to “hire bikes”: http://www.istria-bike.com/en/bike_trails and lots of marked trails to follow. 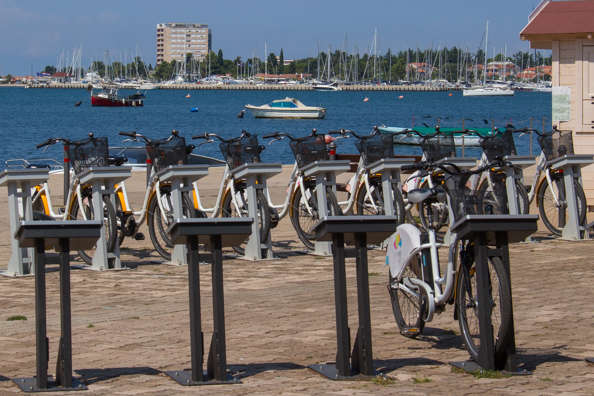 In conclusion, Umag has something for everyone – swimmers, sun worshipers, cyclists, walkers … and beautiful sunsets for the romantics. 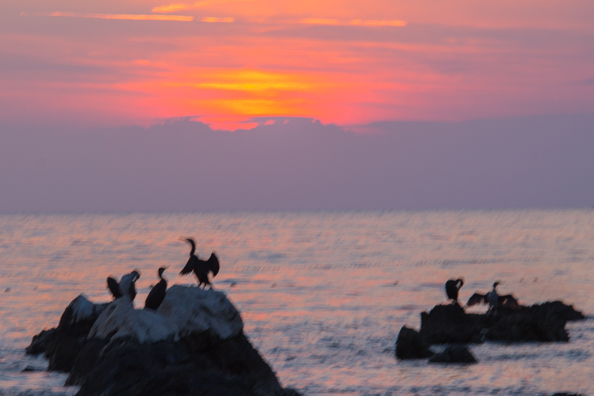