Split is the second largest city in Croatia An unusual characteristic, the wide promenade known as Riva stretches along the sea front reminiscent of some elegant French resorts. The original Riva was established two centuries earlier when this area was ruled by the French under Napoleon.

Cafés and restaurants line the land side of Riva against the dramatic backdrop of an imposing wall. This is the south section of the wall that surrounded Diocletian’s Palace 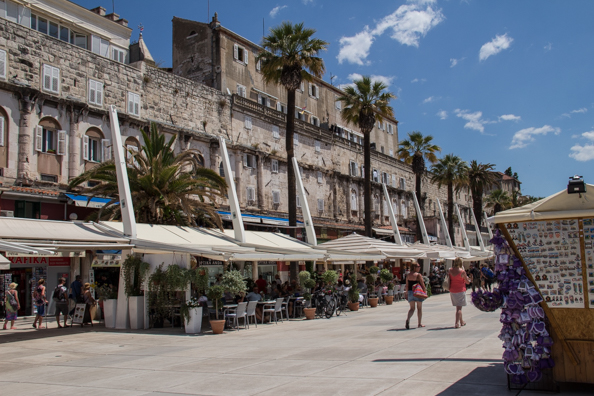 This palace was built in 295 AD by the Emperor Diocletian. He ordered it to be built as a residence for himself when he retired. It took ten years to build and he lived there until he died in 313 AD. Roman rulers used the palace as a retreat but by the end of the sixth century it was becoming dilapidated. Since then very little of the original palace remains as it became incorporated in in the medieval town of Split. When Diocletian lived there the sea lapped around the south wall as he had a vision – he would sail his boat into the palace. It was so close to the sea the windows were set high in the walls in case the sea level should rise. 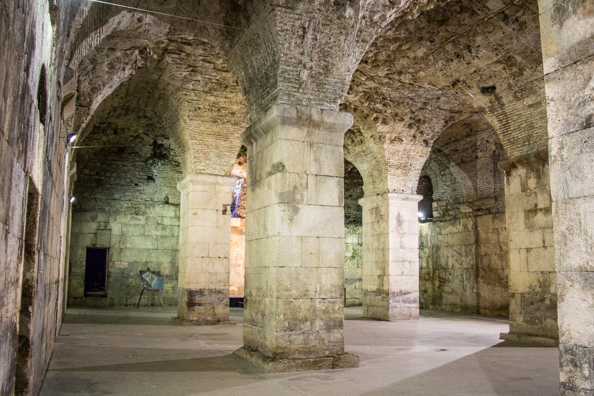 I entered the palace through the south entrance (fee payable). After exploring the empty rooms on the south side of the palace I made my way into the centre of the palace now the centre of the old town. Known as the peristyle or peristil it was the main open space in the palace and originally a temple. I entered the square through the archway in the middle of the fourteenth century Pjaca (town hall) that now houses the archaeological museum. The Cathedral of St Domnius stretches along the eastern side of square. It was built when the palace was built as a mausoleum for Diocletian but was later turned into a cathedral to house the bones of the Bishop Domnius. The colonnaded square has steps on both sides. Visitors can sit here to appreciate the amazing mixture of old and new. The square illustrates the way in which the palace and the town have merged together and evolved into the present day city. 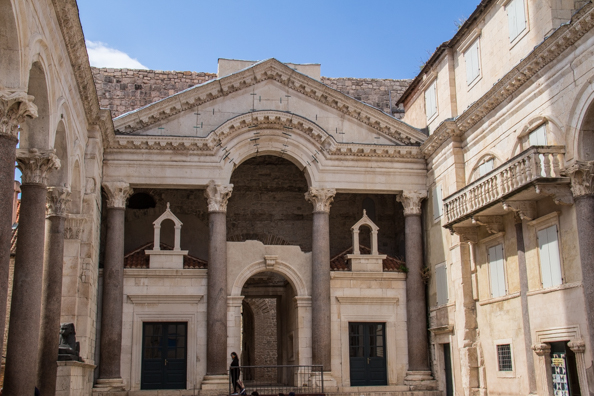 Watching over the square is an unusual monument. An Egyptian sphinx. After Diocletian quelled a rebellion somewhere in Egypt he bought twelve sphinxes back to Split. This one in the peristil is the only one that has survived. It dates back to the reign of pharaoh Tuthmosis III (1479-1425 BC) and is made of black granite. She has hands like a human in which she is holding a bowl for offerings. The other sphinxes were destroyed when the Early Christians arrived in the city and why this one was spared is a mystery. 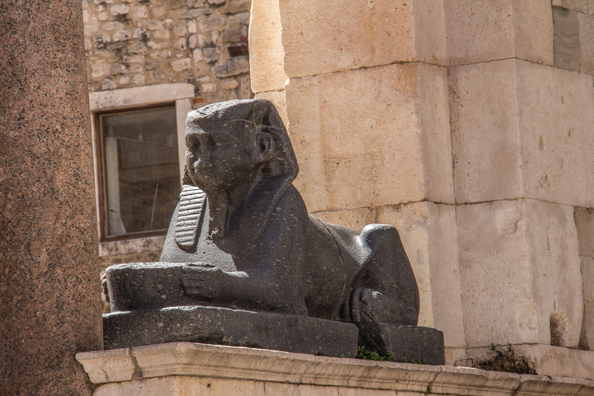 During my exploration of the palace and the old town I would occasionally hear bursts of song but in the maze of narrow alleyways it was difficult to identify the source. As I left the Peristil I discovered the source of the songs – regular performances by a group of men singing acapella style (without music). This multi-part singing is traditional in southern Croatian regions of Dalmatia and is known as klapa. Klapa is UNESCO protected and is regularly performed at tourist attractions. It was very uplifting and the setting was perfect. 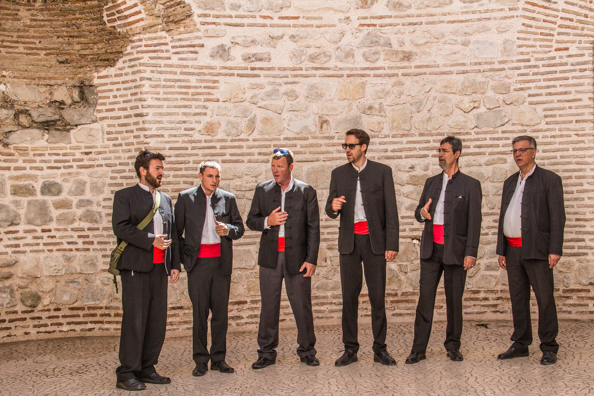 Emerging from the old town through the golden gate the huge statue of Bishop Gregory of Nin (Grgur Ninski) loomed over me. Gregory was an influential bishop during the tenth century who governed the church in Nin, then the capital of the Croats. His promotion of the idea that the Catholic church should hold mass in the local language rather than Latin led to a perception that he was a protector of the Croatian identity. It is a very impressive monument created by the Croatian sculptor Ivan Mestrovic. The big toe on the left foot of Gregory is unnaturally shiny due to the belief that rubbing the toe will make wishes come true. It seems there are cases that prove this is not simply a myth. The statue is on the edge of Strossmayer’s Park that also features the ruins of a monastery and a fountain. 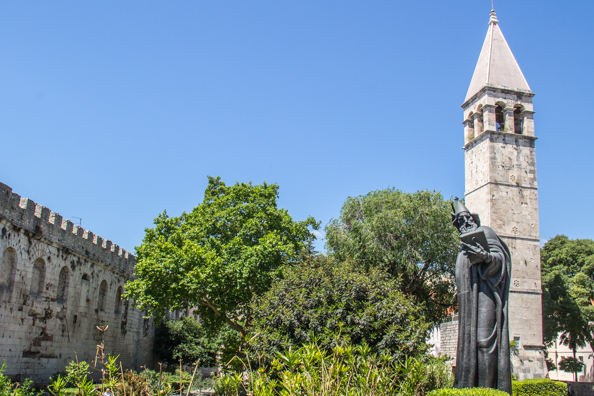 Market stalls snuggle against the east wall of the Diocletian Palace. This outdoor market or pazar is one of the hubs of city life and popular with tourists as well. I could not resist having a quick browse. Souvenirs, hats, every possible product you can make from lavender merged into the flower market. The flower market fringed the fruit and vegetable market. 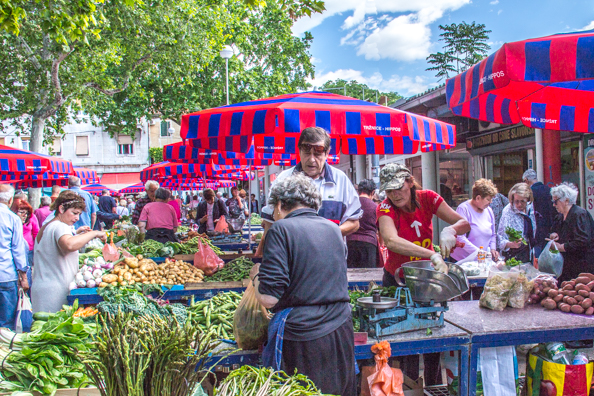 I was impressed by the variety of local produce and in particular the large flat rounds of fresh bread that the stall holder cut to order for his customers. The town also has a fish market or Peškarija is another important centre of life in Split. So important that even though it is now too small for the produce that passes through it every day it has not been replaced by a bigger building. The building that houses the market was built at the end of the nineteenth century is Secession or Revival style. Although I got there as it was closing down the building itself was worth a visit. 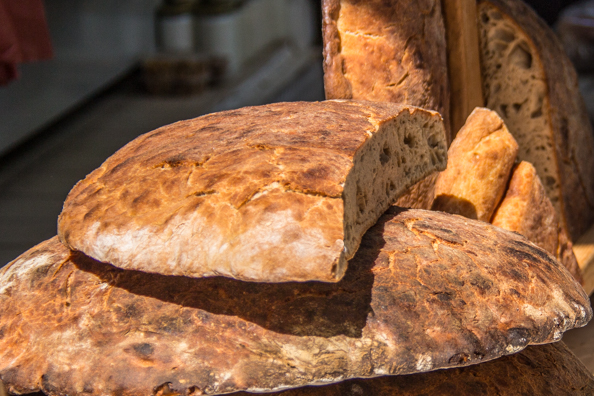 I moved on from the market to a very pleasant lunch at the restaurant of the Hotel Adriana situated in the middle of Riva overlooking the sea. I knew exactly what I wanted, fried fresh squid with a glass of cold white wine. I was not disappointed but customers around me were not too impressed by their ‘Dalmatian Platter’. Encouraged to partake in this local dish of ham, cheese and olives they did not even check the menu. For a few extra Kuna they could have had the same dish I was enjoying. After finishing my lunch, I was ready to climb the Marjan Hill that rises above the town. 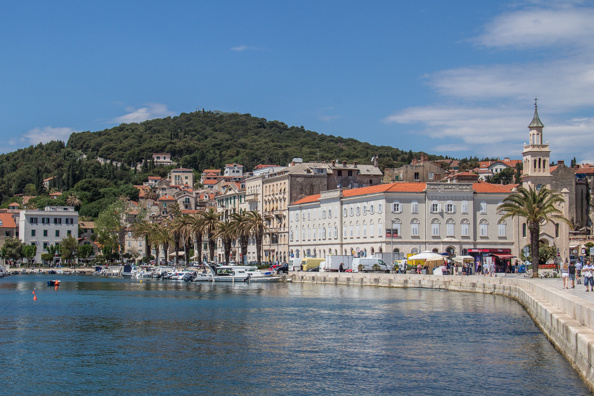 The narrow road beside the Church and Monastery of St Francis (complete with cloisters) at the end of Riva is a starting point to climb up the hill. After a short distance it emerges on a terrace the overlooks the city. Next to this terrace is the café bar Vidilica with a large patio where patrons can enjoy the same view. From this restaurant there are two options to continue to the top. The longer option follows a road the rises gently to a recreation area after which it is steps all the way to the top. The other option involves a shorter, steeper route comprised of several flights of steps that go up the side of the Jewish Cemetery. I chose the latter as the steps were shaded by the trees of the pine forest on either side. 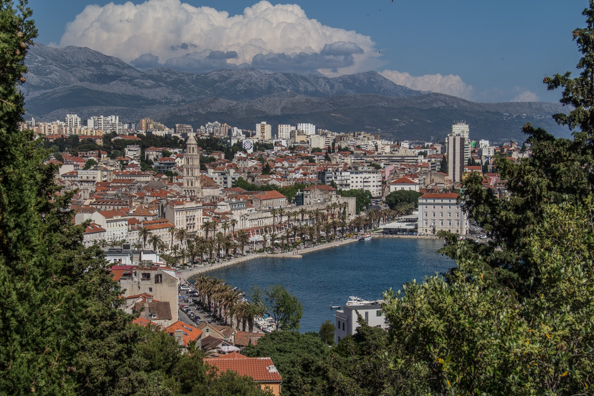 I concentrated on getting to the summit of the hill market by a large white cross and the Croatian flag flapping gently in a welcome breeze. As I walked up the steps I noticed a lot of paths leading into the extensive forest that clothes this end of the Split peninsula. I was in middle of the Marjan Park a popular place with the locals where they can lose themselves amongst the trees or relax on one of the beaches that punctuate the rocky coastline. The park has a number of playgrounds for its younger visitors and is famous for its many small churches. This wooded area is considered to be a spiritual place and the presence of these churches reflects this belief. I found just one little church during my walk, the Church of Saint Nicholas the Traveller. This thirteenth century church was built by a citizen of Split. 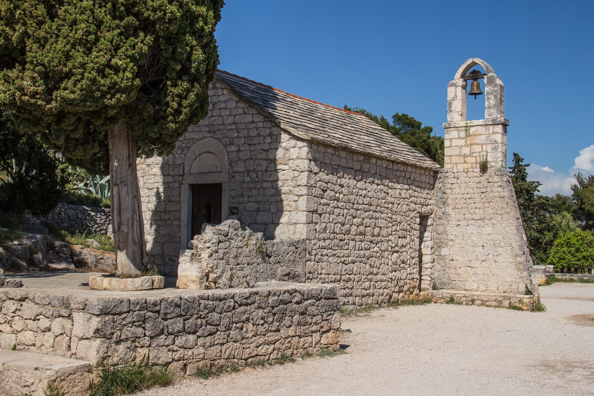 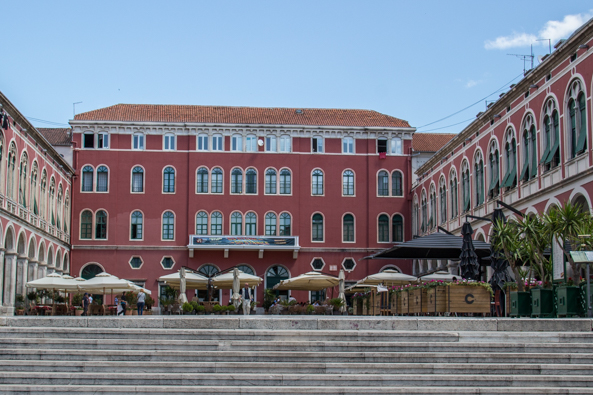 I left Split on the ferry to Trogir, my next port of call.