Aspiring to the Heights of Trogir in Croatia

Standing outside the Cathedral of Saint Lawrence in Trogir I was disappointed to see that no-one appeared to have climbed up to the top of its fourteenth century bell tower. Did that mean it was not open to the public? When I asked about going up there I was shown a small door and invited to enter. I did notice a sign that said I was climbing the bell tower at my own risk as I began winding my way up a narrow flight of stone steps. That was fine by me. The steps were so narrow I did wonder what would happen if I met someone coming down. But I need not have worried as there was no-one else in there and I was soon to find out why. 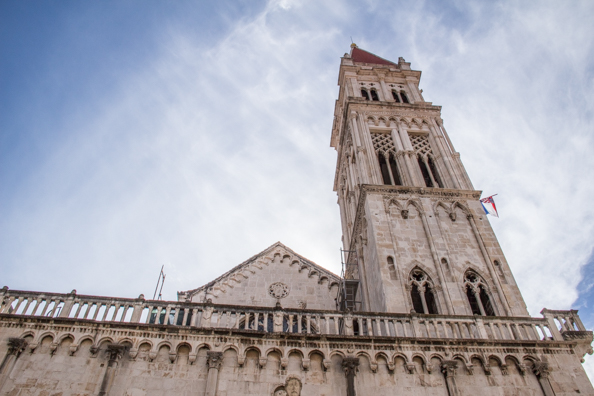 After reaching the top of the narrow staircase without incident I emerged onto a large patio overlooking the town’s main square Trg Ivana Pavla II or Saint Paul II Square. This square was the original the Roman forum. Some of the buildings that now surround it were constructed during the thirteenth century. When the city was renovated during the fifteenth century the square achieved the shape it is today. I had entered the square by following the narrow street leading from the North Gate on the land side of the town. Also known as the Land Gate it was the main entrance to Trogir when the Venetians ruled the town during the fifteenth century and strengthened the city walls. This gate was re-built during the seventeenth century and a drawbridge was included. Sadly, this feature is no longer in use and visitors have to walk across a small bridge to reach the island on which Trogir is based. Notable features of the Renaissance gate include the Lion of Saint Mark which symbolises Venice and a statue of Saint John of Trogir (Sv Ivan Trogirski) the patron saint of the town. 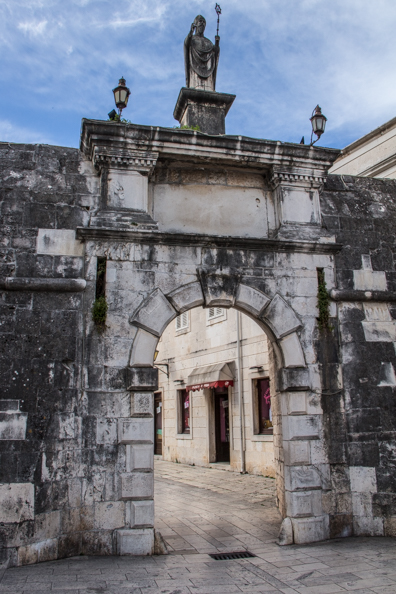 From my elevated position I had a great view of the façade of the grandiose, Large Cipiko Palace opposite the cathedral. This palace is one of several built in the town by its most powerful families during the fifteenth century when the Venetians were in power. It was created by the famed architects Niccolò Fiorentino and Andrea Alessi and belonged to the Cipiko family. The building, in reality two palaces joined together, has a number of unique features including a carved Venetian Gothic window and a carved wooden statue of a cockerel taken from the prow of a Turkish ship during a battle at sea. The palace is not open to the public as part of it is in private ownership. The Music School, some of the city departments and the Conservation department occupy the remainder of the building. 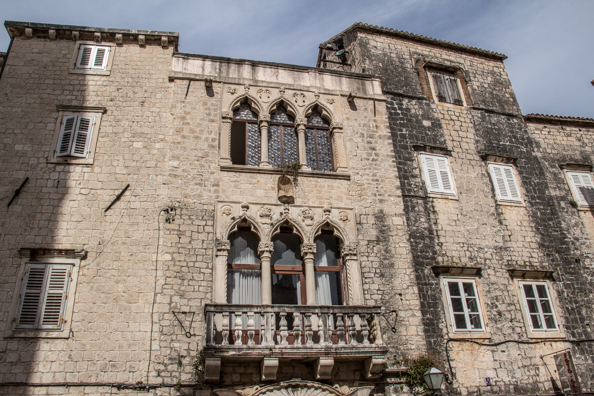 Moving to the other side of the terrace I could see Saint Sebastian’s church on the far side of the main square. This church was built in 1476 as a votive church or an offering given by the citizens of Trogir to give thanks for their deliverance from the plague. The front of this Renaissance building is decorated with sculptures of Saint Sebastian and Christ the Saviour. It displays the coats of arms of Bishop Giacomo Torlon and that of Duke Malipiero. A part of the eastern wall contains the remains of a centrally planned church with six apses dedicated to St Mary. Against the west walls rests a plaque bearing the names of the fallen defenders of the Homeland War also known as the Croatian War of Independence. 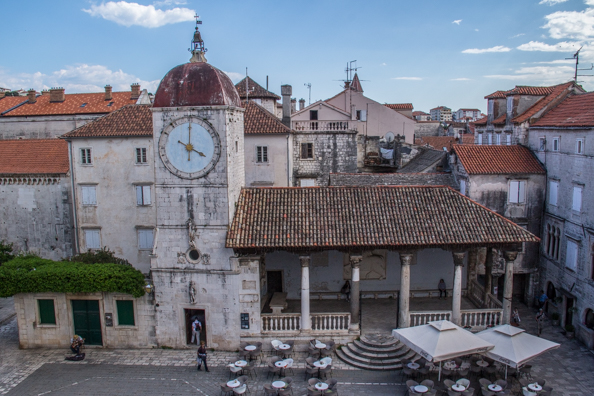 Trogir’s Clock Tower that appears to rise up from the Church of Saint Sebastian and was once part of the church is famous for its large blue face. Its domed roof was taken from the church in the middle of the fifteenth century. Next to the tower is the City Loggia that was once level with the square but is now accessed by steps. The loggia was built sometime during the fourteenth and fifteenth centuries. It once served as a court but now is an open space featuring a relief of Petar Berislavic of Trogir (a viceroy) by Ivan Mestrovic and an empty space where once the Lion of Venice was displayed. In the courtyard of the City Hall or Town Hall, at the far end of the square, the well in the centre still features the winged lion of Saint Mark of Venice. It was one of the few that was not destroyed when the Venetians moved out. The City Hall, a fifteenth century building has a Gothic courtyard displaying a collection of coats of arms and a pretty stone staircase. 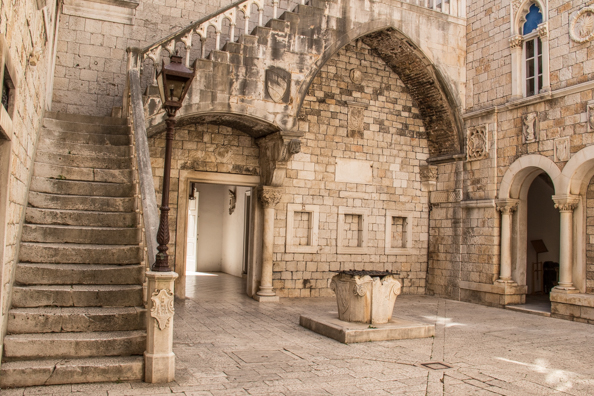 Climbing up to the belfry at the top of the bell tower was an interesting experience. It involved several flights of metal staircases apparently place randomly inside the tower. The last one got narrower as I went up it and finally connected with a few stone steps. I had to pause here to shove my rucksack through the narrow opening before scrambling through after it. The wind whistled through the mesh that covered the large regular openings in the walls around the bells. I was glad it was there as I had visions of being whipped out of the tower and floating away above the town. The views of the town below were worth the climb to the top. 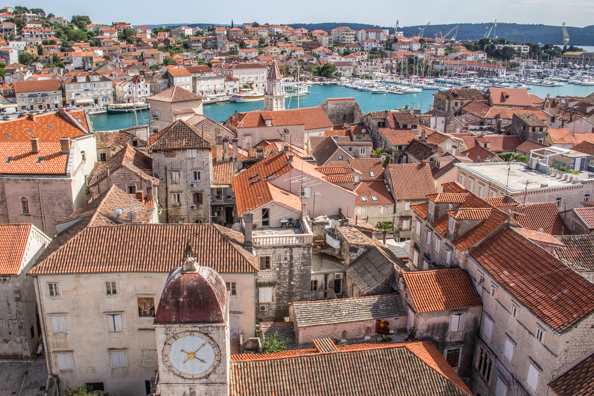 I could not leave the cathedral without having a look inside as it is considered to be one of the finest buildings in Croatia. Building began at the end of the twelfth century this impressive three-aisled church to replace an ancient church destroyed by the Saracens. It was finally finished at the beginning of the sixteenth century. The main entrance to the cathedral is through a beautiful Romanesque door that was carved by Master Radovan in 1240 and generally referred to as Radovan’s Portal. This impressive entrance is flanked by two stone lions. 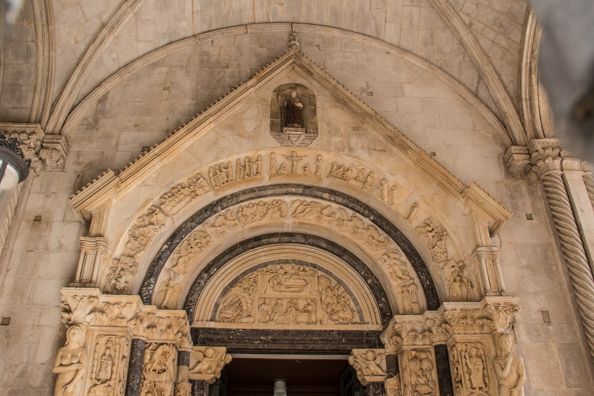 I left the old town through the South Gate or porta civitatis. This entrance is decorated with Renaissance artefacts and still has wooden doors. Immediately outside this gate attached to the city wall is the Small Loggia. This was built as a shelter for those who missed the curfew and got locked out of the city at night. 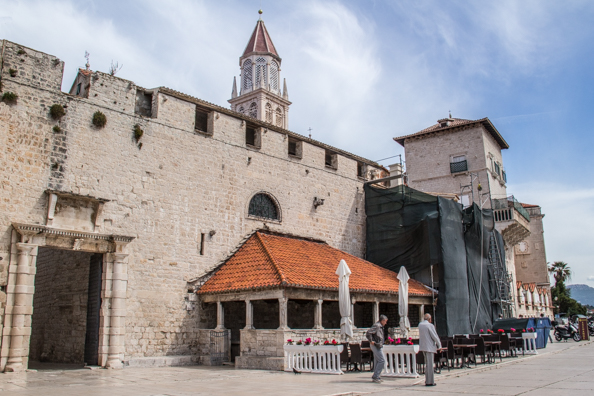 I walked along the sea front towards the tip of the island which is guarded by the impressive Kamerlengo Castle. On my way I passed the Saint Dominic Monastery that was founded in 1265. Today it sits in a forest of large umbrellas shading clients of the string of restaurants along the water’s edge. Kamerlengo Castle was built by the Venetians to defend Trogir in the early fifteenth century. It also served as the governor’s palace for a while. Today the caste has found a new lease as its courtyard is used as a venue for outdoor performances during the summer months. 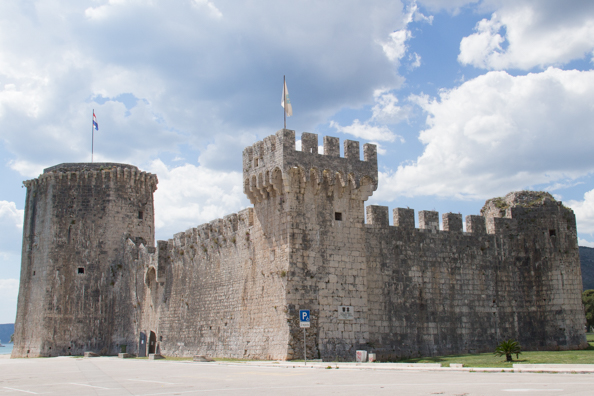 I decided to continue my circuit of the island and after strolling through the parks and gardens at the behind the castle I came across Saint Mark’s Tower. This circular tower post-dates the castle and was also built by the Venetians to guard the narrow channel between the island and the mainland. Now all it has to worry about are the pleasure boats bobbing on the water below it and the busy market just across the water, on the mainland. 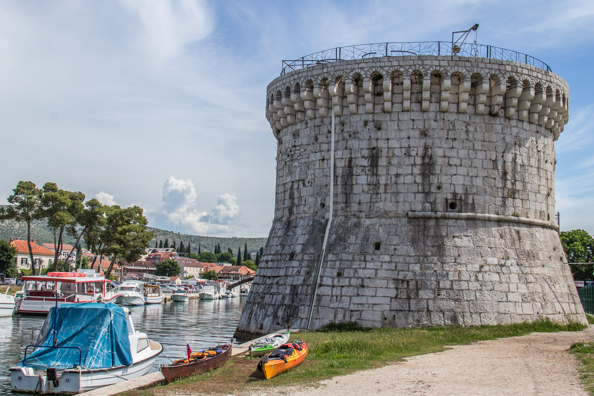 I had enjoyed my short tour of Trogir and had a glimpse of its fascinating history . It was no surprise to discover that the town had been awarded the accolade of UNESCO world heritage site in 1997 and it certainly deserves it.