A Trip to Myanmar

Even though I was back at work after having total replacements of both knees I continued with my rehabilitation doing exercises every morning before starting my day. I was doing well but there were still some challenges ahead of me and leading a long haul sight-seeing tour to Myanmar was the next one.

The Long Haul Flight to Myanmar

As part of my rehabilitation had involved bending my knees as far as they would go I could now sit comfortable for several hours. So, I was prepared to do so on my flight to Yangon. But I did ask when I checked in if there was the possibility of a bulkhead seat which would give me more leg room and make it easier to get out to walk up and down the aisle. I knew from past experience it was no good asking for an emergency exit seat as any hint that you might not be able to act quickly enough in an emergency would result in instant refusal. Nowadays anyone can pay a premium to sit in these seats and the only requirement seems to be an ability to understand English. to act. I had the usual tussle going through security regarding the removal of my shoes. I was told not and obeyed. I was sent back to take them off and when I tried to avoid this by explaining the frenzy of beeping was because I had two metal knees I was told I did not move as though I had false knees. I took that as a compliment and did as I was told. The flight was much better than I had anticipated. After a meal accompanied by some wine I settled down to watch a film and fell asleep. I woke up just before we touched down in Yangon feeling remarkably refreshed. 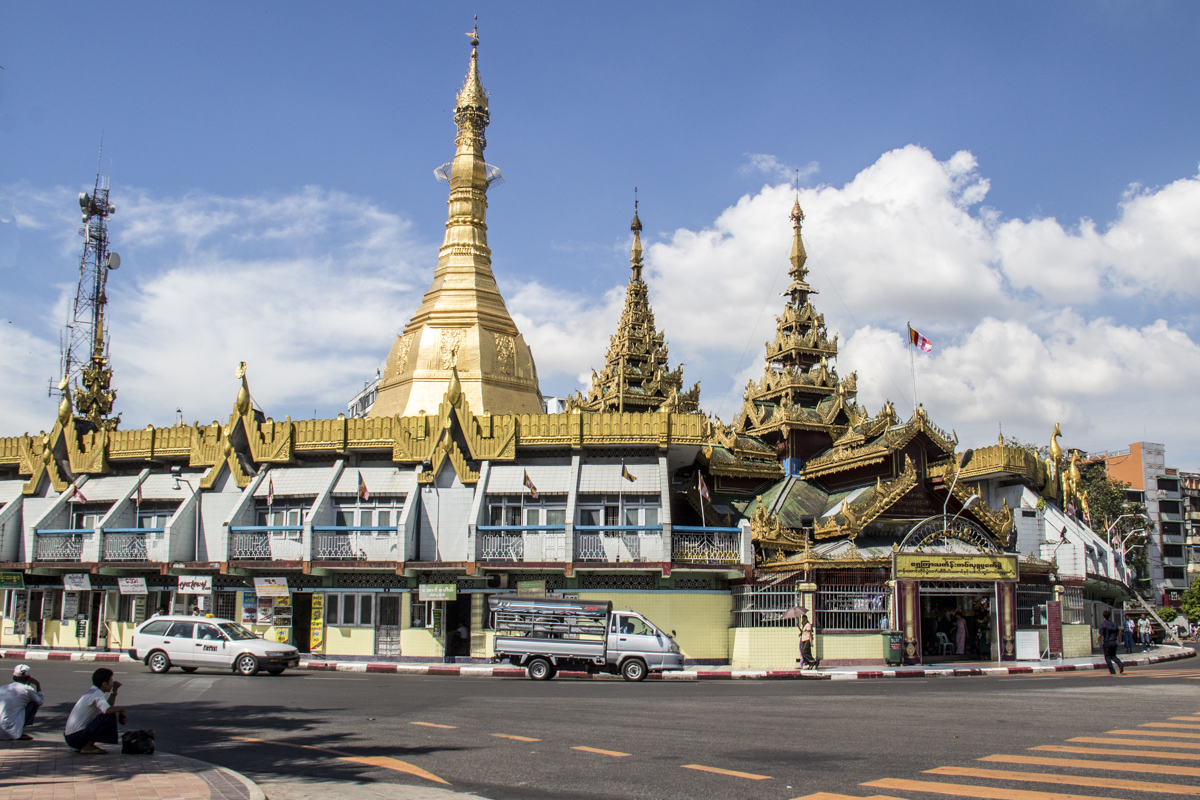 A Trilogy of Temples in Yangon Capital of Myanmar

Yangon is famous for its temples and in particular the massive Shwedagon Paya.  All visitors are required to remove their shoes before entering a temple. I had no problem taking them off and putting them back on but I was not keen on leaving them in the open lockers. Even though a young attendant would, for a small tip, keep an eye on them. I have been using insoles ever since my knee problems started and would be lost without them. My solution is to use a lightweight rucksack and carry them with me. Shwedagon Paya is amazing and I did not have any problems walking around and standing for the two hours we were there. Covered with sixty tons of pure gold, it's the heart of Buddhist Burma. There was a steady stream of pilgrims exploring the many spires of the main pagoda. For the people of Myanmar, it is the most sacred of all Buddhist sites, one that all Myanmar Buddhists hope to visit at least once in their lifetime. 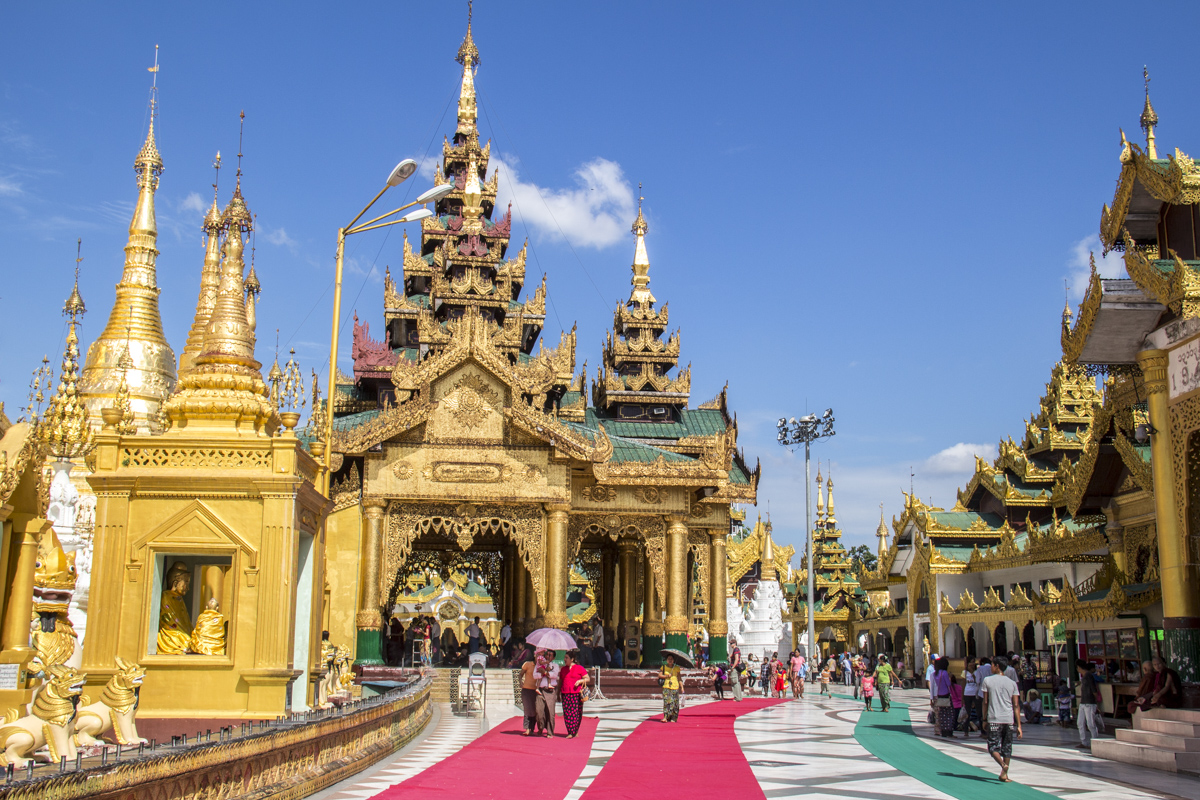 Next we visited the old colonial-style gilded Sule Pagoda in the city centre. Sule Pagoda is the centre piece of Yangon because of its strategic location, religious significance and artistic beauty. Our final visit that day was to the Chauk Htat Gyi Pagoda.  This pagoda is famous for a sixty-five metre Reclining Buddha. It was certainly impressive and as it so large I did several circuits before finding a the best angle for a good photograph. By this time most of my group were waning and the consensus was an immediate return to our hotel. When we got back I went out again to walk around Kandawgyi Lake close to our hotel. It had been a busy day and my new knees had not complained once. 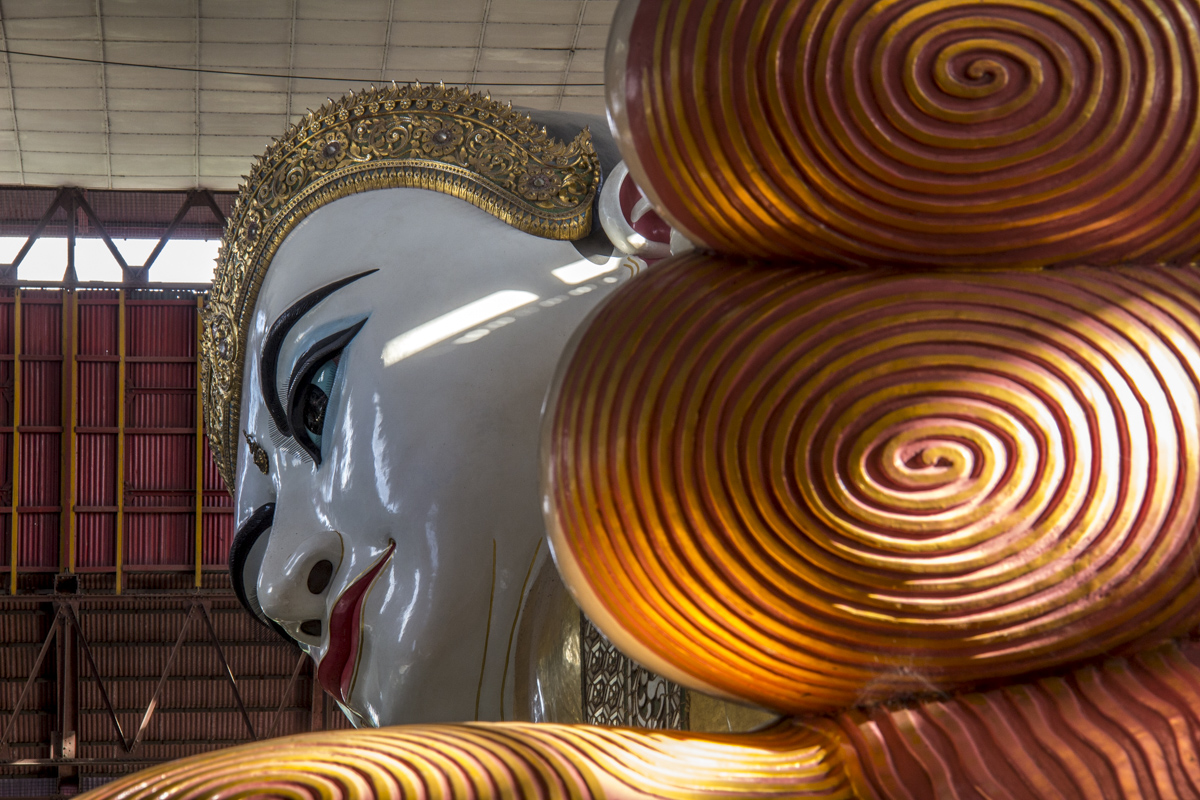 While touring Myanmar we spent two days skimming the surface of Lake Inle.  We stayed in a hotel on its shores but spent the day exploring the huge expanse of water in small long-tailed boats.  These boats have one engine that sticks out at the back. They are very noisy and can move very fast. Getting on and out of them was quite a skill especially when no jetty was involved (generally the case) just a slippery mud bank. I had not told my companions about my surgery and as I wearing long trousers to protect my scars from the sun I did not think anyone would notice. They did not. Whereas t the boatmen would offer a hand to all the other ladies in the group I was left to my own devices and my knees coped without a murmur. It was fascinating visiting the little villages on and around the lake and watching the unusual style of the locals rowing their boats. 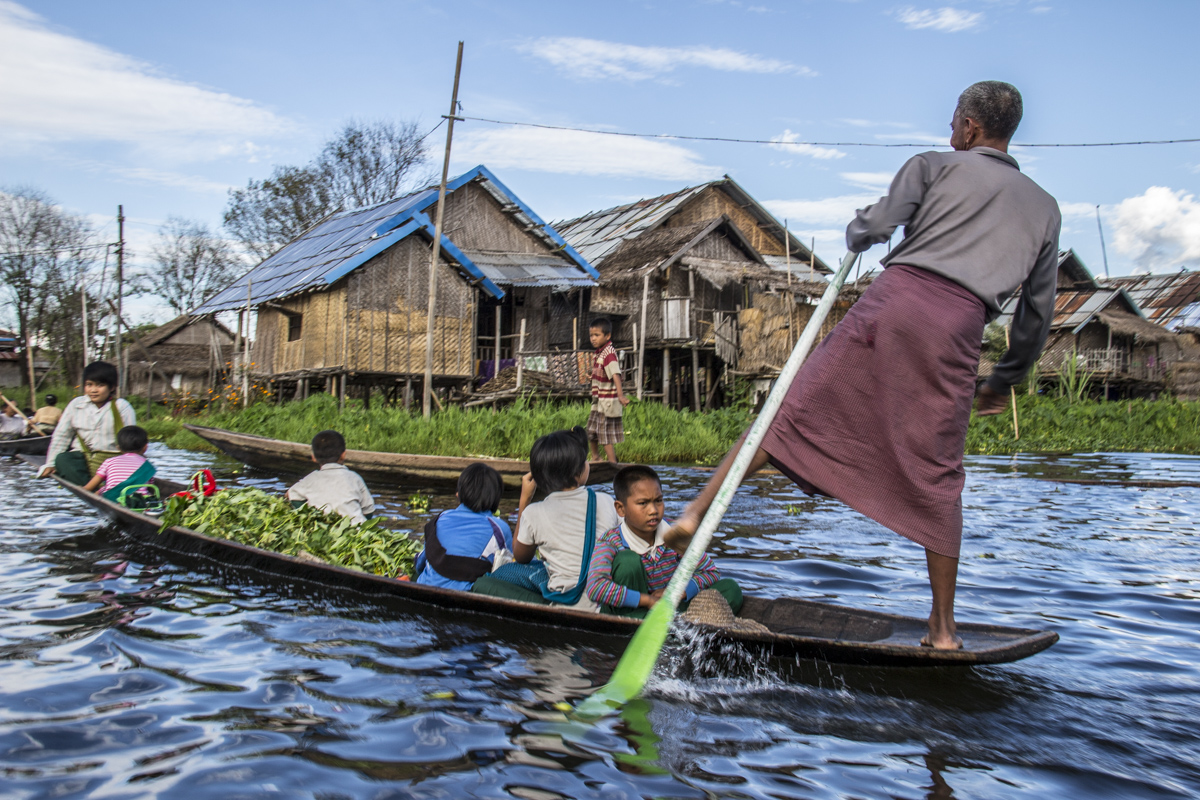 When we did our boat trip from Mandalay down the Ayeyarwaddy River to Mingun I was jumping on and off the boat like an old hand. When we disembarked I was confident enough to cross the long, narrow wobbling plank from boat to shore without having to use the temporary railing, a bamboo pole supported by a crew member at either end. Mingun was my temple climbing initiation. I climbed several flights of steps to the top of the beautiful "Hsinbyume Paya":https://www.renown-travel.com/... pagoda. The stupa (centre) of this unusual pagoda is surrounded by seven wavy whitewashed terraces representing the seven mountain ranges around Mt Meru. My knees passed with flying colours as I bounded up and down the steps enjoying amazing views of the countryside around me. 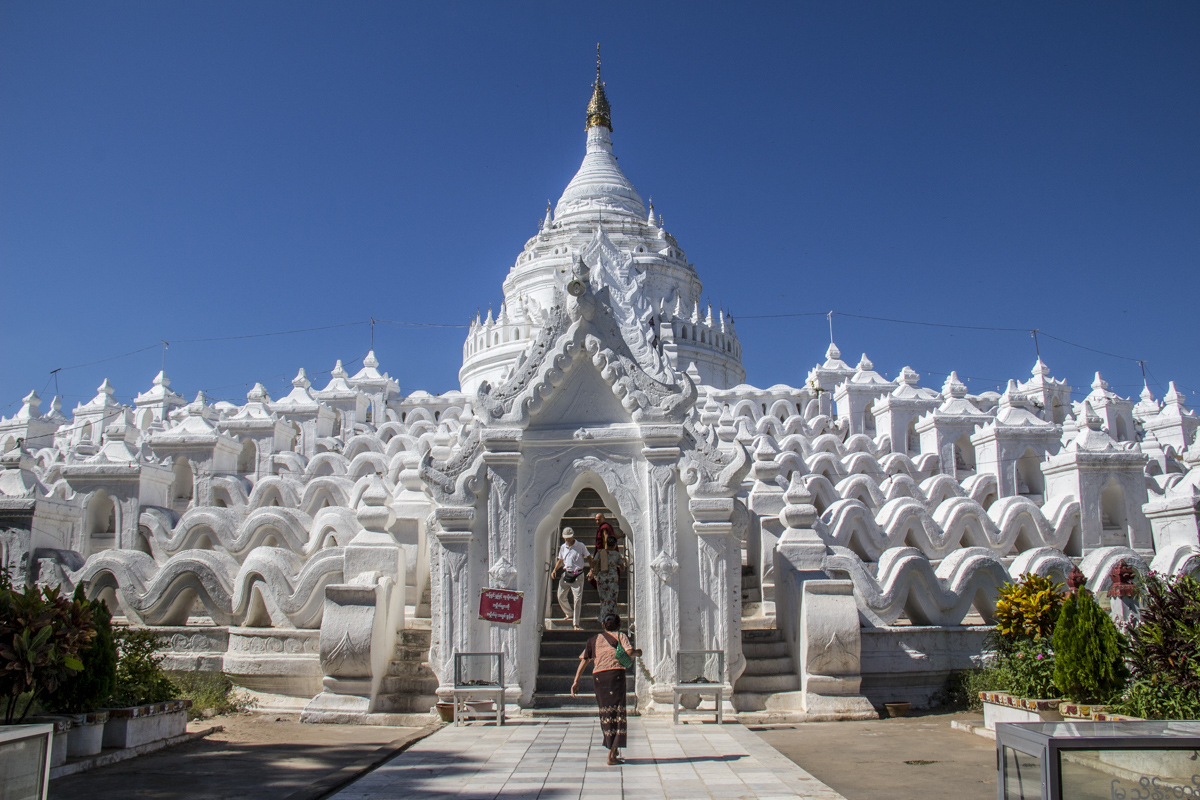 Conquering steep temple steps was not my only victory in Myanmar.  Using Asian style toilets (a hole in the ground) was a good exercise for me. Ten times a day was probably a bit excessive but I was overjoyed because I could squat without fear of having to raise the alarm because I could not straighten up again. 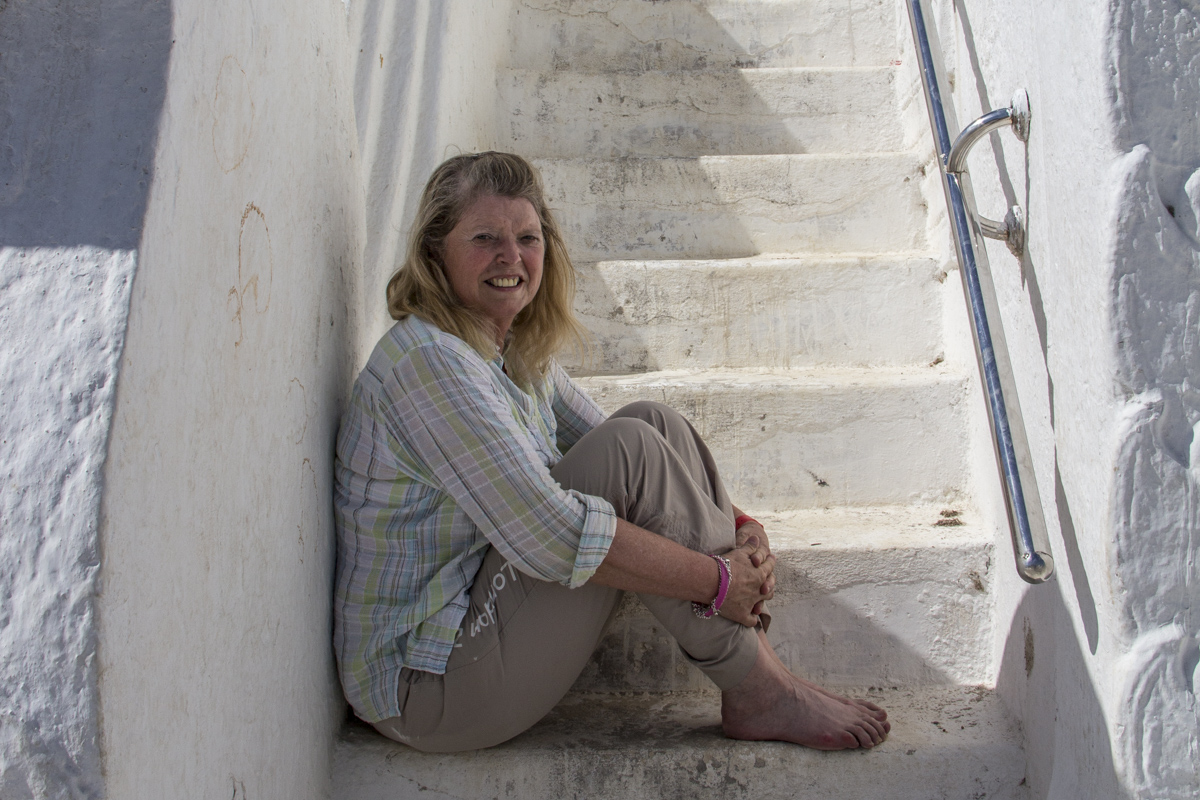 Mingling with the Monks of Myanmar

Since my surgery to have both knees replaced I had avoided crowded places. I was unsure how I would cope in a situation where I might be pushed in a direction I did not want to go. During my trip to Myanmar my group and hundreds of other people visited the Buddhist Mahagandayon Monastery near Amarapura I had to option but to join in. Every day the one thousand monks who live and study here process through the complex to receive their main meal of the day. Visitors are allowed to enter the monastery to watch them and they do – great crowds of them. Being a monk is a popular occupation for the menfolk in Myanmar. They are revered in this country and the people give food to them. Those who cannot afford to donate good offer services such as the preparation of food in the huge kitchens of the monastery. It was a fascinating experience and one I survived by creeping up to the first floor veranda of a dormitory and watching the procession from there. 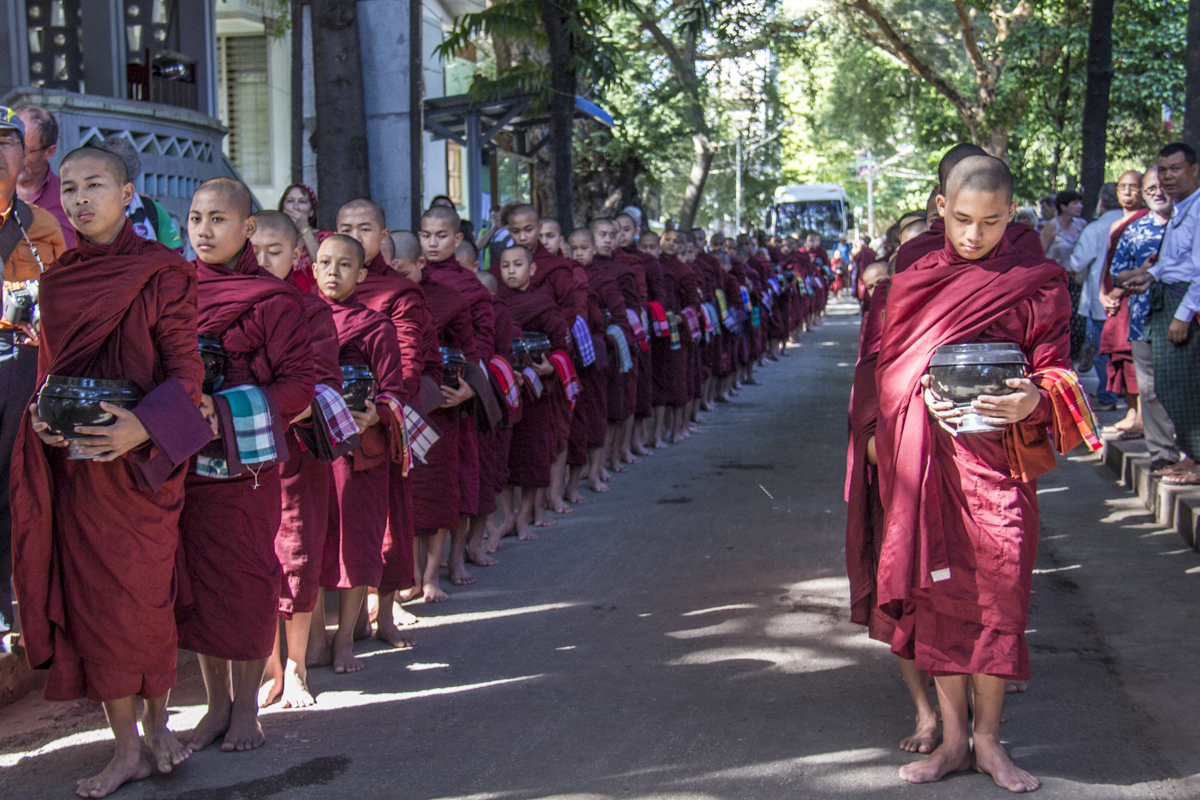 Conquering the Temples of Bagan in Myanmar

Bagan is an incredible place. Temples everywhere you look some buried deep in forest and scrub and some resplendent in ... We spent the day exploring different temples, clambering over uneven stones and feeling our way through unlit narrow corridors. I loved every minute of it and was thrilled to find I was able to take everything in my stride. As dusk fell the final challenge was climbing to the top of the tallest temple to watch the sun setting. This involved scaling five flights of deep uneven stone steps. Both the ascent and the descent were a challenge but this was more about my short legs than my new knees. I remember sitting at the top marvelling at the beauty of the sunset but also feeling so thankful that I had been able to fully explore Myanmar without any problems. And so grateful to my surgeon and physiotherapist who had made it possible. 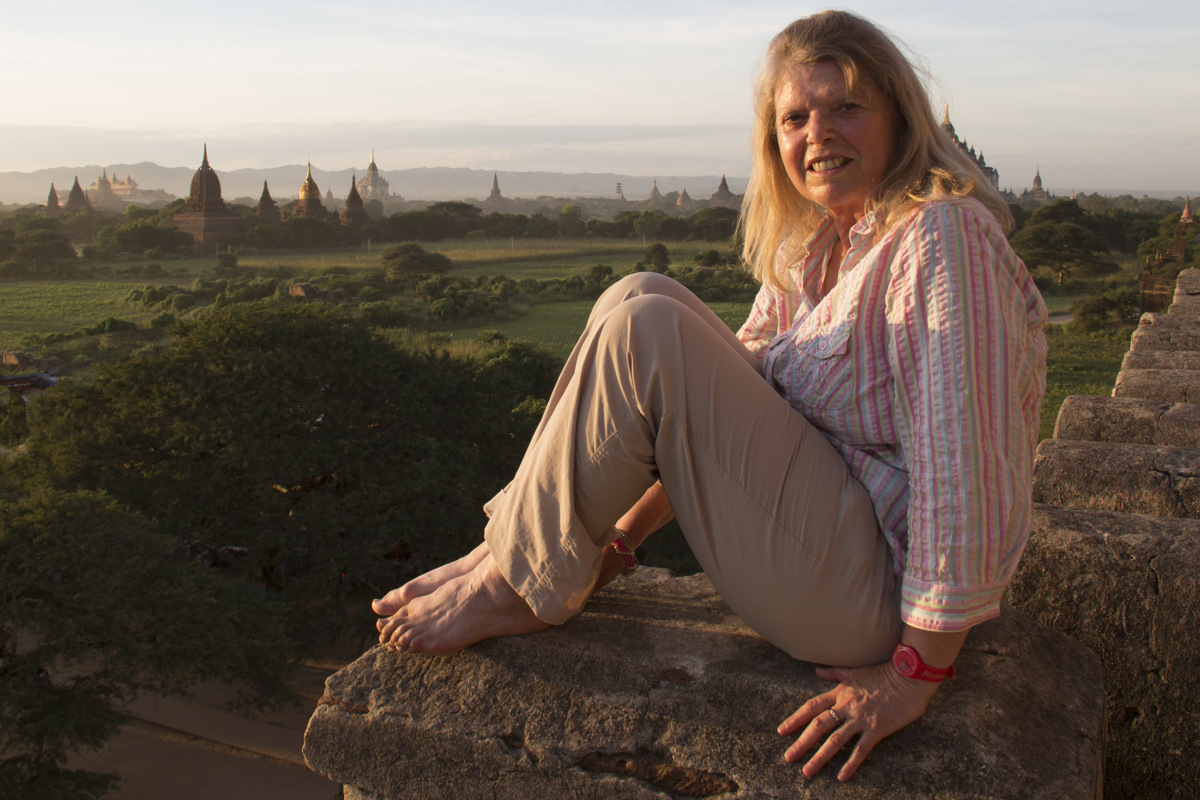 As soon as I was back in the UK I began preparing for my next challenge - skiing in the Italian Dolomites.