I think my passion for photographing monks began in India when I spotted a large group of them posing in the Red Fort in Agra with the Taj Mahal in the background. 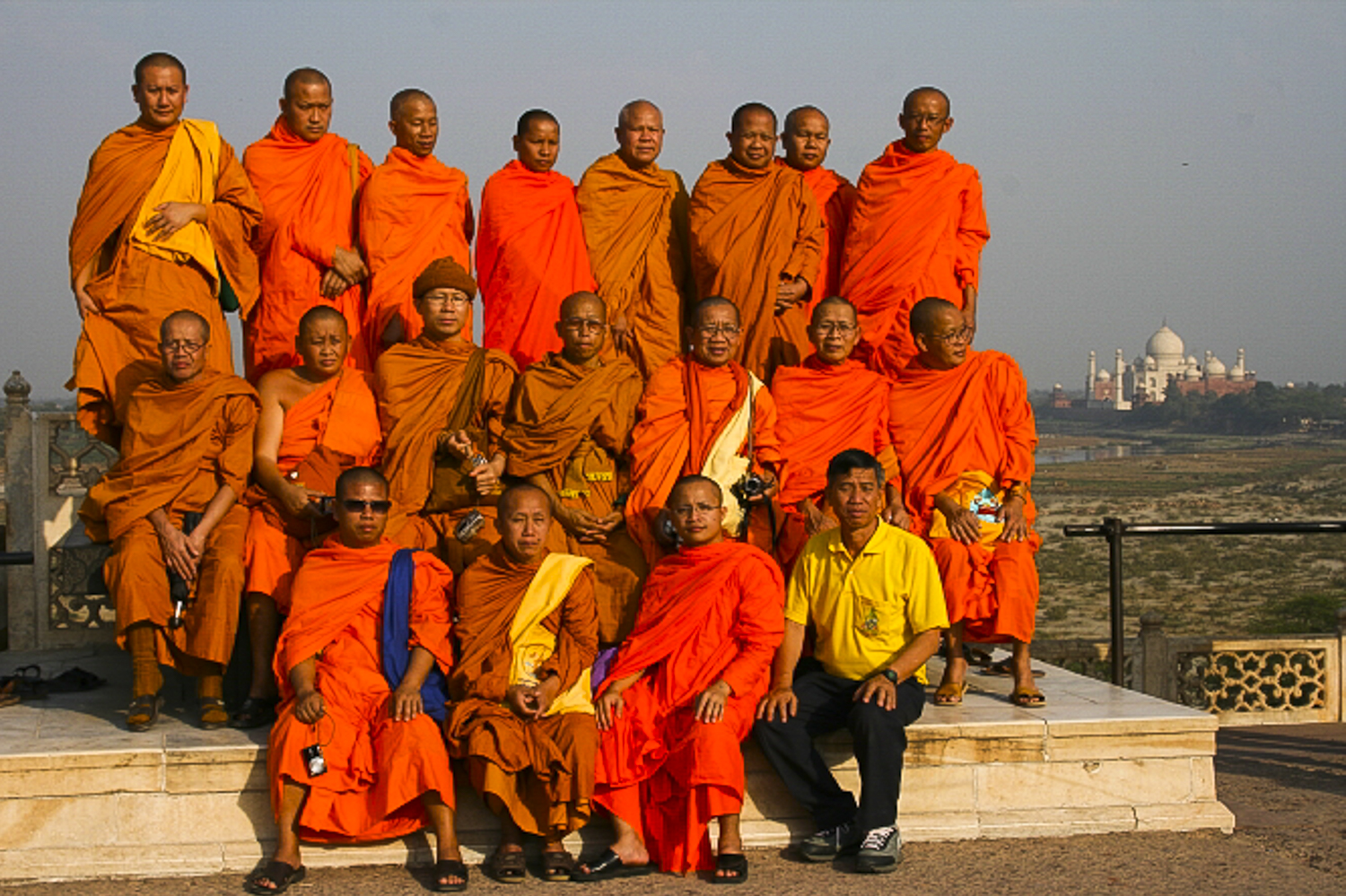 While touring Vietnam I watched novice monks playing football at the Thien Mu Pagoda in Hue City and although it seemed incongruous they were having great fun. 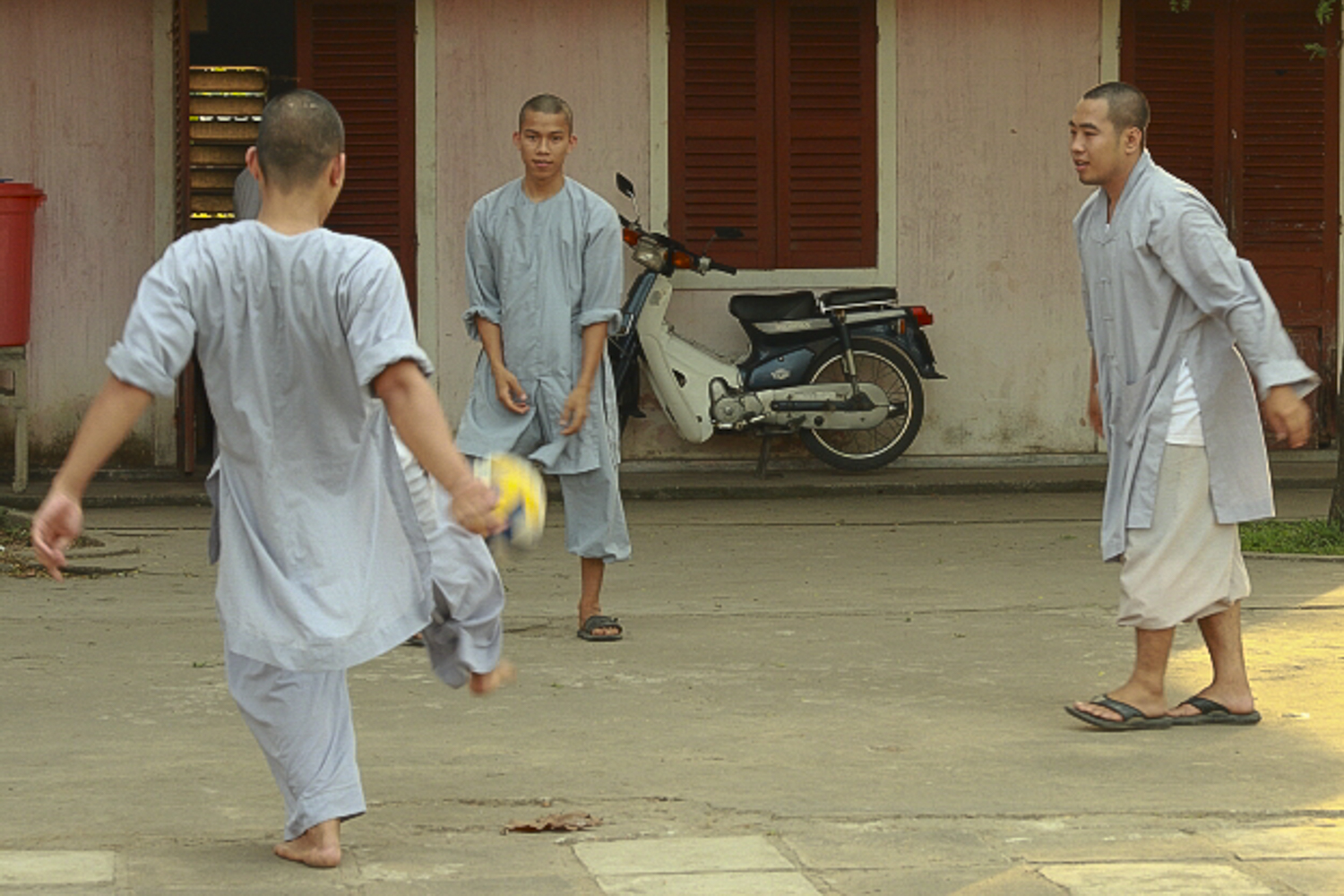 These were occasional glimpses but Myanmar was a feast of photographic opportunities as there were monks everywhere. We could look but we could not touch. Hence we would see monks hanging off the back of the trucks that were used as public transport to keep out of the way. But every morning the monks walk the streets for one and a half hours in their bare feet carrying black pots collecting food for their monastery from shops, houses and businesses. They are not allowed to wear shoes as a reminder of how hard life can be. Before they go out early in the morning they have something to eat and their main meal will be eaten late morning when they eat the food they have collected. After that they do not eat again, only drink, but nothing with milk in it. They eat what they are given (they are not vegetarians) and they eat for sustenance rather than taste. 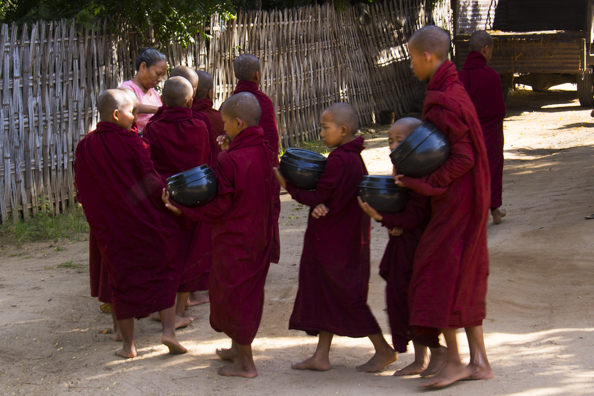 At Mahagandayon, a famous Buddhist monastery near Amarapura, visitors are allowed into the monastery to watch more than one thousand monks who live and study there line up to receive their main meal of the day. We arrived in time to have a look around the complex before the monks lined up to receive their food. This complex has several buildings all donated by different people and built in different styles. When we arrived the monks had just returned from collecting food that morning and some were cleaning the pots they had used, others were washing themselves and brushing their teeth and some were hanging out the laundry – newly washed robes of varying colours. All these chores are done outside. It was fascinating watching monks of all ages rushing around carrying their soap, toothpaste and toothbrushes in small tin bowls. 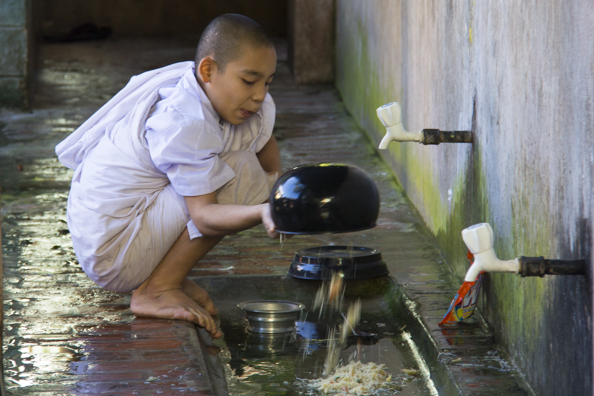 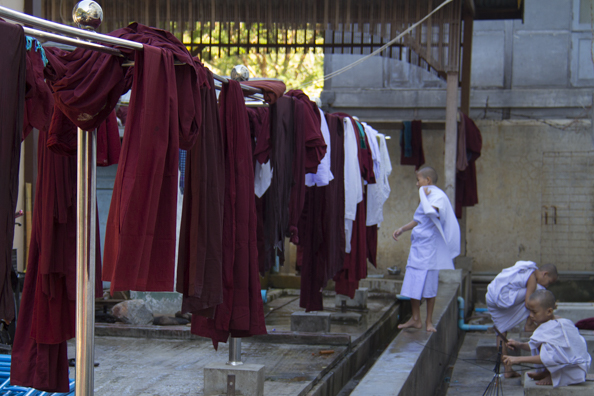 There was frantic activity in the large kitchen areas where people were chopping up vegetables or stirring soup in huge metal cauldrons – cooked food was being re-heated and other dishes were being prepared from raw ingredients. Those who could not afford to donate food gave their time to help with the preparation and service of the meal. While we were exploring the monastery more and more tourist buses were arriving and the place got very crowded. When the monks lined up ready to receive their food all the tourists flocked to line the road they would walk along. We were told not to touch the monks as they filed past us into the courtyard where they were served from tables laden with food before entering the dining area. There were so many people milling around it was impossible to get close enough to take good photographs so I took my shoes off and went up to the first floor of a deserted building that overlooked the courtyard where the food was being served. 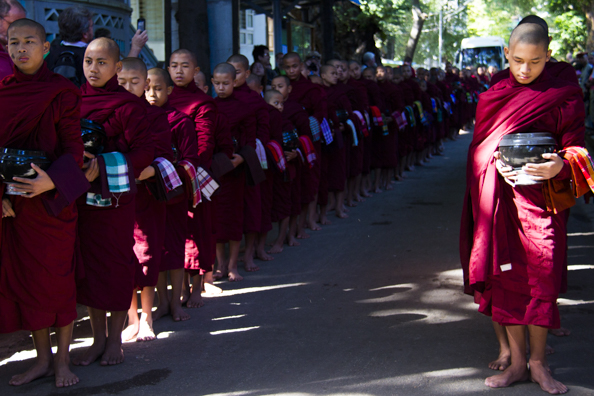 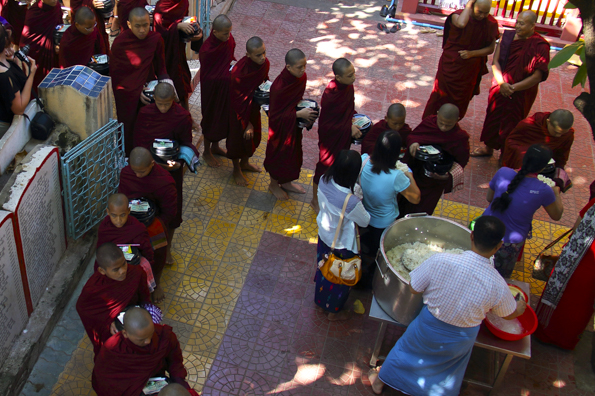 During our stay in Myanmar we witnessed another tradition associated with the monks. While we were visiting a factory we heard a commotion outside and we rushed out of the building just in time to see a line of trucks conveying donations for the monks to the local monastery – one truck had kitchen utensils stuck all over it, another was covered with witches brooms and some were carrying triangular shaped boards with bank notes attached to them. Once a year, during a celebration of the full moon which lasts for two days donations are collected for the monks and then taken to the monastery during a celebration of the full moon which carries on for two days after the full moon. This festival, known as the Tazaungdaing festival or the Festival of Lights takes place on the day of the full moon during Tazaungmon which is the eighth month in the traditional Burmese calendar. This national holiday celebrates the end of the rainy season and it also marks the end of the Kathina (Kahtein) in Burmese) season. During this festival robes are donated to the monks. It used to last for one month as it took a long time to make a robe but now the process is much quicker. The origin of this festival pre-dates the introduction of Buddhism to Burma and is believed to stem from the Kattika festival, which honours the guardian planets in Hindu astrology. 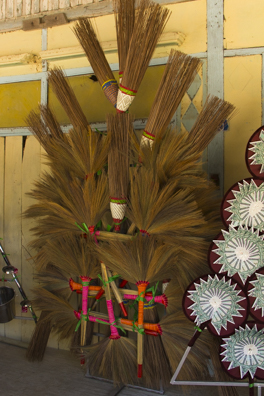 In Myanmar the monks are either permanent or temporary. Any man or boy can enter a monastery on a temporary basis and stay there from a few days to several weeks. The permanent monks have to meditate and study and the senior monks give lectures. It is very flexible and all voluntary. They are very much part of the community and we saw them everywhere in their dark red robes, made from lotus blossom thread that made a great contrast with the gold of the temples or the green of the countryside. 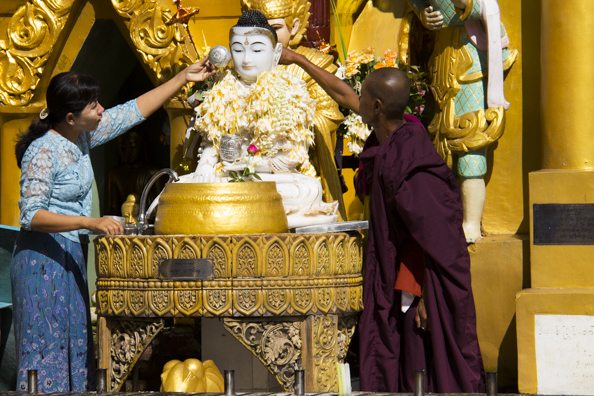 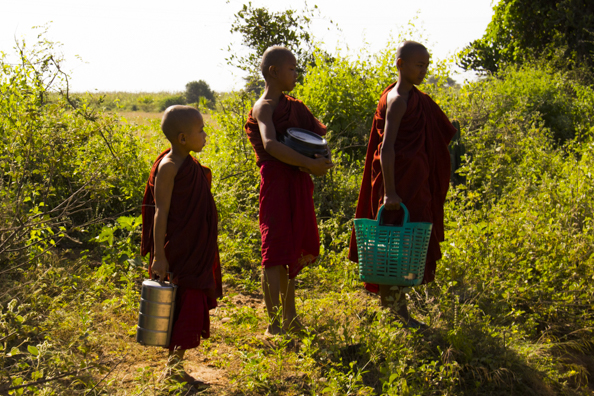 Nuns do exist in Myanmar but they are not as prominent as the monks. They only collect food once a week and they only collect raw ingredients which they cook themselves. They do not walk around in bare feet. Like the monks they can be permanent or temporary. Like wraiths clad in pink they slip in and out of the shadows and it was hard work to capture any images of them. 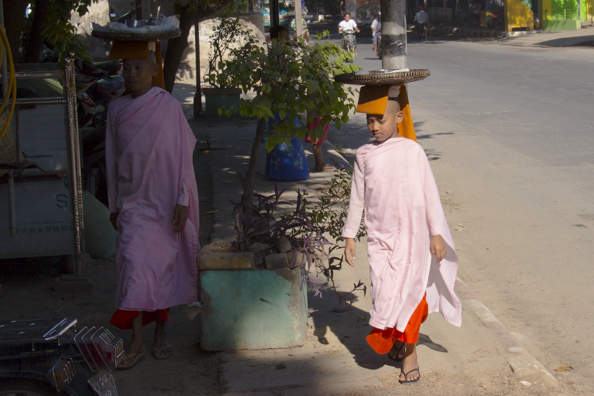