The amazing temples of Bagan crept up on us out of the dense vegetation that lined the route from the Nyaung Oo Airport to our hotel. It was an extra-ordinary sight – myriad temples rising above a lush green plain. This plain nestles in a bend of the Ayeyarwady (Irrawaddy) river. An astounding 4,450 temples were built by the kings of Bagan between 1057 and 1287 and around half of them survive today – a legacy of the Buddhist belief that to build a temple was to earn merit. There were temples everywhere we looked, even in the garden of our hotel the Bagan Hotel River View. 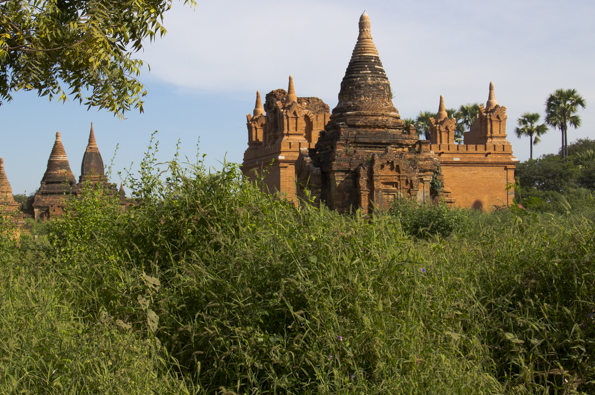 Despite its name and its position on the banks of the Ayeyarwaddy River the bedrooms do not have a view of the river but the open-air restaurant occupies a terrace overlooking the water and is a delightful place to eat. Blocks of rooms are haphazardly scattered around the gardens but the signposting is virtually non-existent and there is no logic regarding the numbering of these buildings. I struggled to find my way around and on one occasion sought the help of a fellow guest who confessed that he was also lost so we found a member of staff who showed us the way. Thereafter I always followed the same path using the swimming pool as my reference point. 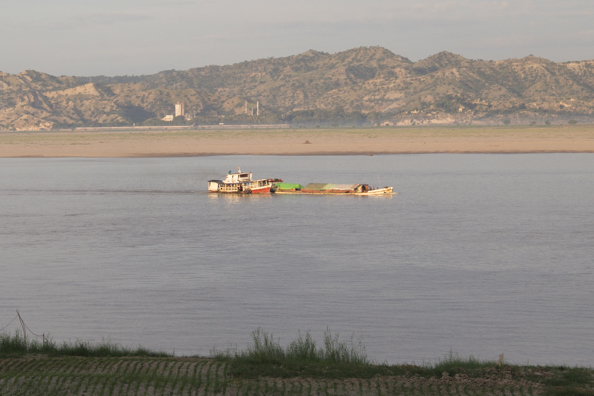 I had two wake-up calls the next morning – the traffic on the river and the men banging on doors and shouting to people to wake up and making so much a noise that everyone was roused from their sleep! After breakfast in the early morning fresh air we set off to explore starting with New Bagan where most of the hotels are situated. Our first stop was the large covered market that bustled with locals crowding round stalls piled high with fresh vegetables. When I had to reverse to let two locals carrying a heavy load get through a narrow passage between the stalls I became separated from the group. I wandered around on my own taking photos. There were some red vegetables that looked like fancy carrots but I later discovered to be bamboo stalks. I was not really concentrating on where I was going and came out on the wrong side of the market. It was an easy mistake to make as the market had four entrances. I went back in but still came out the wrong side so I walked all the way round the outside to the bus park. 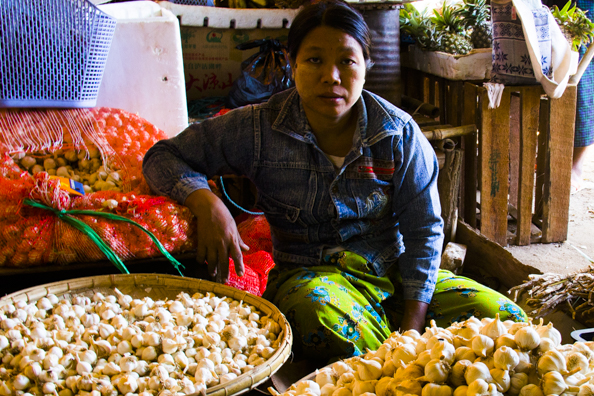 Our next stop was the Shwezigon Pagoda which was built during the eleventh century by King Anawrahta after his conversion to Theravada Buddhism. He was the first major advocate of this religion in Myanmar and the first of the great builders of Bagan. He had completed three terraces of the Paya when he was killed by a wild buffalo in 1077 and it was left to King Kyanzittha, his successor to complete this shrine. It was under this king that Bagan came to be known as the ‘city of four million pagodas’. 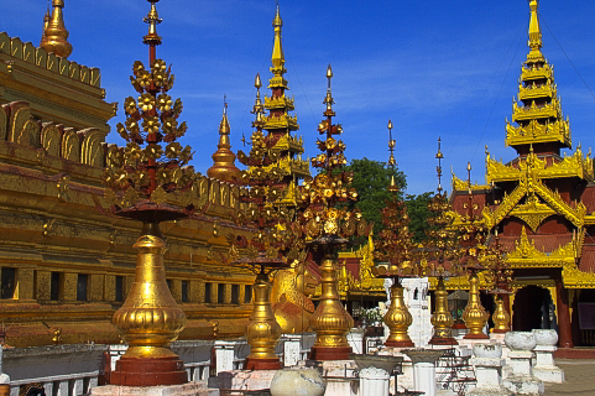 This pagoda, the prototype for many other stupas across Myanmar, has withstood the ravages of time and earthquakes although it has been repaired several times. There have also been some additions to the original structure and now more than 30,000 copper plates donated by local, national and international visitors to Shwezigon cover the pagoda, and between 1983 and 1984 the entire structure was covered in gold. 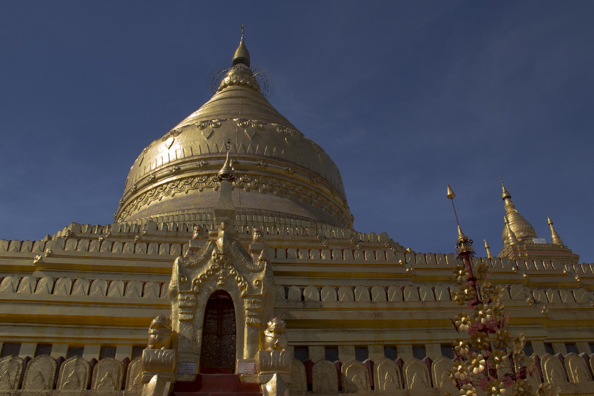 We entered Shwezigon Paya through one of the four gates in the outer wall that also encloses other shrines, stupas and structures. The pagoda is built of solid sandstone blocks on a sand bank and its purpose was to enshrine a copy of the Tooth Relic (of Buddha) that King Anawrahta had brought with him from Sri Lanka. It is said that he the relic on the back of his white elephant and set the animal free having decided that wherever the animal bowed down he would assume to be the place where the Tooth Relic wanted to reside. The Tooth Relic was enshrined on the sand bank and the pagoda was built around it. While the pagoda was being built the Tooth Relic replicated itself into four more copies which were enshrined in four separate pagodas built especially for them. 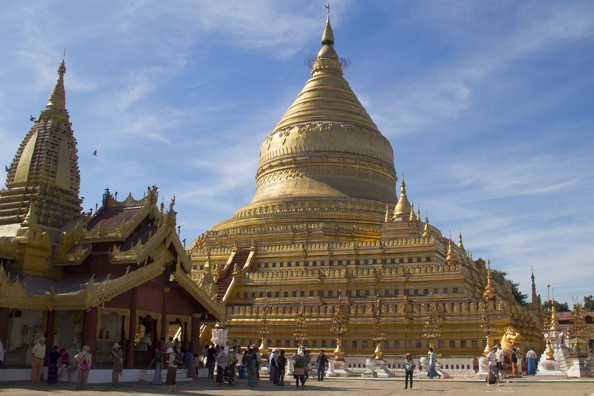 Gu Byauk Gyi, a 13th century temple with exquisite murals of Jataka scenes was our next stop and then we drove to Myingaba village to visit a lacquer workshop where we watched the locals deftly weaving palm stalks to make the moulds for the lacquer work. The beautiful lacquer work in the showroom proved irresistible and I bought two small black and gold owls having been convinced that I needed a pair to place in the hall of my flat to bring me luck. Since they took up residence I have had a leak in my ceiling but I dare not throw them away – they are so cute! As we boarded our bus some children clustered round us offering to sell us some drawings they had done and another purchase was made. 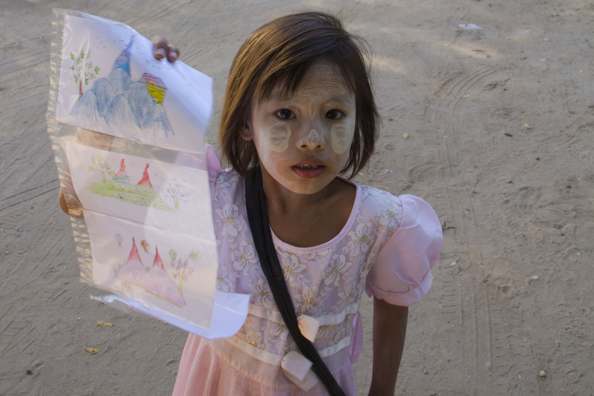 After lunch we visited some more temples starting with the Manuha Temple, built in Mon style in 1059 which has some interesting murals. We moved on to the Nanbaya Temple, a unique sandstone monument said to have been the palace of King Manuha and then to Myingaba Gu Byuk Kyi Temple (under the protection of UNESCO) and noted for its ancient mural paintings. The temples were beginning to merge into each other and I was losing track of the meanings of all the different poses of Buddha so I often sat on the steps outside a temple just marvelling at the carpet of temples and trees spread out before me. Our fourth temple that afternoon was the immediately recognisable Ananda Temple, one of the finest and largest temples with its shimmering gold spire and four huge standing-Buddha images as well as numerous seated figures arranged around the interior gallery. This temple is like a museum as it has examples of a variety of Myanmar arts. 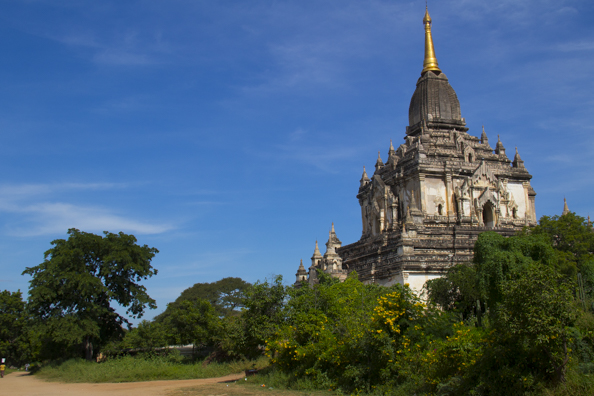 Finally we made our way to the temple Shwe San Daw a temple with five tiers and a great place to watch the sun setting. I climbed to the top tier but it was very crowded and impossible to find somewhere to stand or sit and as people were still climbing up there and I did not want to get caught in the rush when everyone descended later I moved down to the second tier which was high enough to afford a good view of the surrounding countryside and also I as there were very few people on this level and could do a complete circuit. As darkness fell our bus arrived to take us back to our hotel – with my shoes on board. I had started to leave my shoes on the bus as the driver was very good and drove as close to the temples as he could get. When he saw us coming out he came to pick us up. It was only possible to do this in old Bagan which just has dirt roads crossing the large expanses of vegetation between the temples. 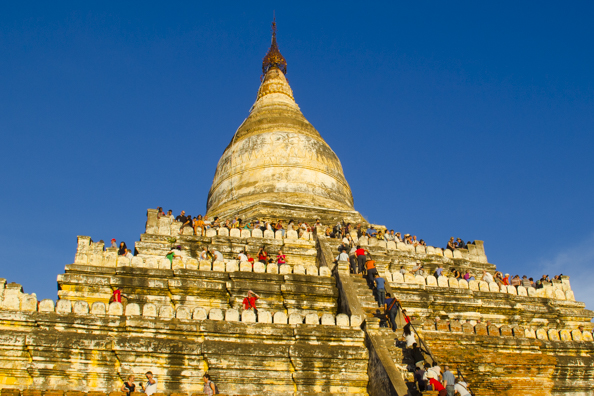 For me and several of my companions our second morning in Bagan involved a pre-dawn wake-up call. Fortunately by this time the hotel had remembered that the rooms all had telephones and we did not have to endure the banging and shouting of the previous day. We were driven through the darkness to the hot air balloon take-off area in a modern minibus but the company, Eastern Safaris, also owns some 1940 wooden floored buses. We passed a stream of locals on their bikes most of them without headlights on our way to the large open area where the canopies of six balloons were laid out on the grass. Loud music was blaring out from a café across the road which I assumed to be the end of a long night but which in fact signalled the start of the working day. The balloons were springing into life and their passengers were soon scrambling into their baskets. 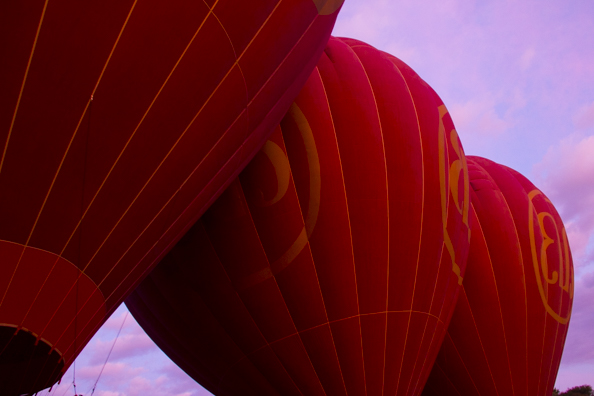 It was a majestic sight as the six balloons ascended slowly towards a brightening sky and were joined by three more from another site – nine maroon orbs floating over a tangle of palms and tamarind trees. I was following behind them in the support vehicle. Driving through the archaeological site made me appreciate just how large it is. We parked by the roadside and watched them all floating gracefully to earth again. Having toasted their safe landing with pink sparkling wine and feasted on fruit and croissants we returned to our hotel in time to join the others for breakfast. 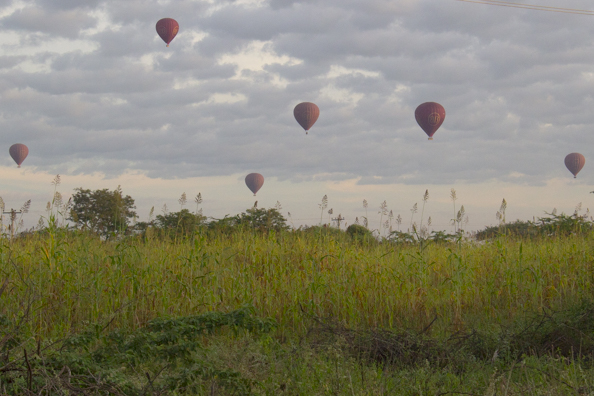 We started our sight-seeing in small pony and traps and trotted through the countryside past temples and farms to the first temple we were visiting that morning. The three temples Tayoke Pyay Temple , Phaya Thone Zu and Nandamanya (noted for exquisite 13th century murals) are very close together. We were brimming with information about temples so we took it in turns to walk round with our guide while the others lazed outside in the sun. Next we visited the Kyat Kan Cave monastery where we descended below ground level to see the cells where the monks actually lived. 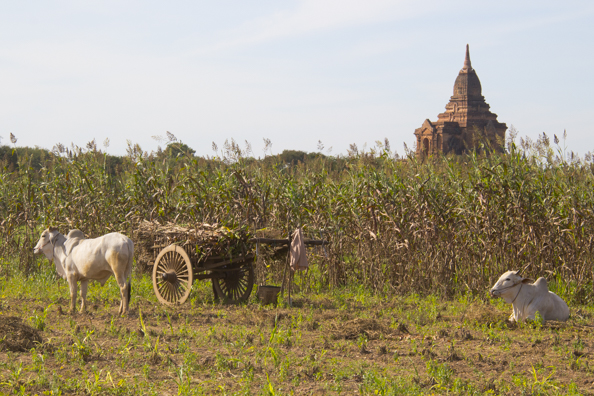 After lunch we visited three more temples. We started with Sulamani, one of Bagan’s great two-storied Bamar style temples, which has four seated Buddha images at each compass point of the temple. The next temple we visited was the massive Dhammayangyi Temple, the largest temple in Bagan and famous for its interlocking mortar less brickwork. It is also known as the bad luck temple as it could never have been completed, because its builder King Narathu was assassinated inside the temple. According to local legend the king decreed that the bricks be fitted together so tightly that it was impossible to push a pin between them. If a pin could penetrate between the bricks then the slaves responsible were put to death. Bizarrely the Buddha just beyond the main entrance had mats with teddy bears on them in front of it. It was also strange to walk through the unfinished corridors and very rough on bare feet. 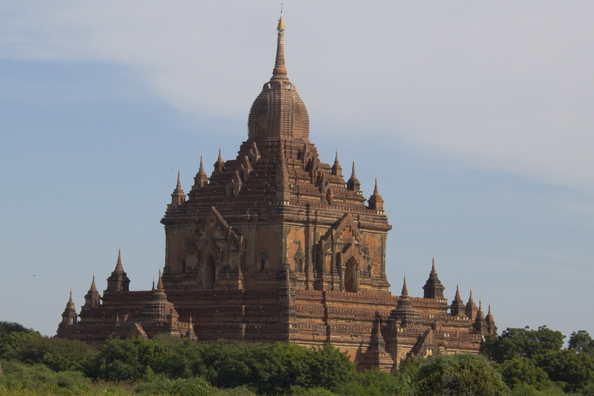 Finally we visited the only Hindu temple, Nat Htaung Kyaung Temple dedicated to the Hindu god Vishnu that still has an image of this god inside. It had been a long day which ended with dinner in the gardens of the Amata Hotel in new Bagan accompanied by extravagant entertainment. When I got back to my room the cleaner was hanging around at the end of the corridor. He raced down and took a rose from the door handle which he gave me and then he opened the door for me and showed me my bed which was strewn with petals. I chuckled in delight and fished some coins out of my pocket. For the second time during my stay in Myanmar I fell asleep surrounded by the scent of roses. 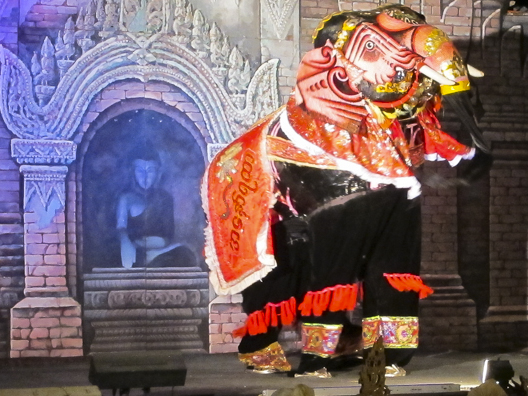