A Road to Mandalay

Come you back to Mandalay
Where the old Flotilla lay:
Can’t you ‘ear their paddles chunkin’ from Rangoon to Mandalay?
On the road to Mandalay – from The Road to Mandalay by Rudyard Kipling
It was a pleasant surprise to discover that the road to Mandalay was actually a river, the Ayeyarwaddy River, and that during our stay in Mandalay, we would be taking a trip on that river. Mandalay was the pre-colonial capital of Burma (now Myanmar) and is still considered by many to be the country’s cultural centre. 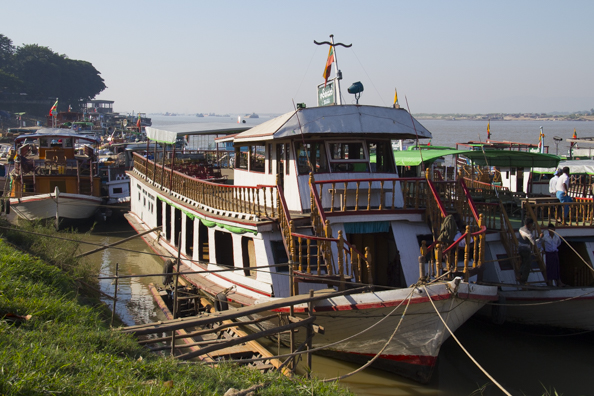 We stayed in a lovely hotel, the Mandalay Hill Resort which is set in beautiful grounds around a large swimming pool. I did not have time to use the pool but I did get up early one morning to use the gym. I needed some exercise to work off some excessive eating. Dinner the previous evening was a barbecue in the garden and we had queued up chose from a good selection of ready prepared skewers. While these were being cooked for us we browsed a buffet of side dishes to accompany our grilled food. It was a very enjoyable – even the local entertainment. The only drawback was the protracted wailing from a nearby pagoda in the early hours of the morning but I was assured this was a rare occurrence as it only happened during festivals and we were in the middle of the month of Tazaungmon when various festivals take place throughout the country. 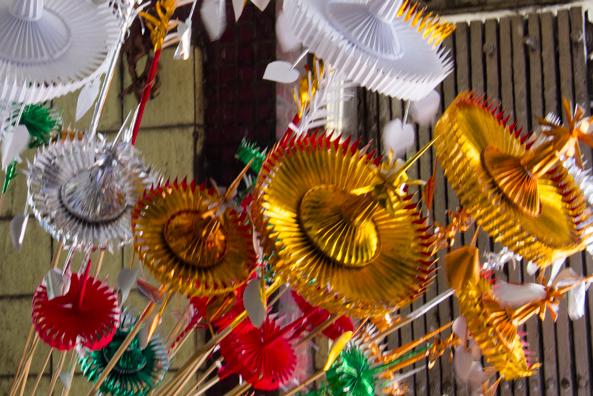 On our way to Amarapura, one of the four ruined ancient cities around Mandalay, and the penultimate Royal Capital we stopped at a gold leaf factory where we watched men pounding blocks of gold to produce gold leaf. They used half a coconut shell floating in a bucket of water as their timer and when it sank they could have a break. There are many workshops in this area and during the day we watched tapestries being woven, baskets being made and lacquerware being decorated the shelves of our bus were soon filled with packages. But shopping was not our main reason for visiting Amarapura we went there to visit the unique U Bein Teak Bridge . This 150-year old bridge was built in 1851 by driving 1060 teak posts (salvaged from the Royal Palace in Amarapura) into the bed of the Taungthaman Lake and it stretches for 1208 metres connecting two villages on either side of this lake. 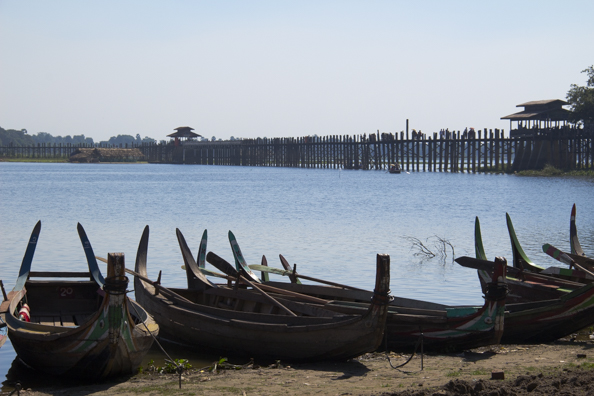 As we walked on to the bridge I saw some birds in a cage and our guide told me that people buy these birds to set them free as it is symbolic of their own problems flying away and they also get a merit for freeing the birds. I could not help voicing the thought that catching the birds in the first place was probably not very meritorious. My attention was soon drawn elsewhere as there was so much going on by the lake including men washing their lorry in its waters and oxen ploughing the fields on its shore. 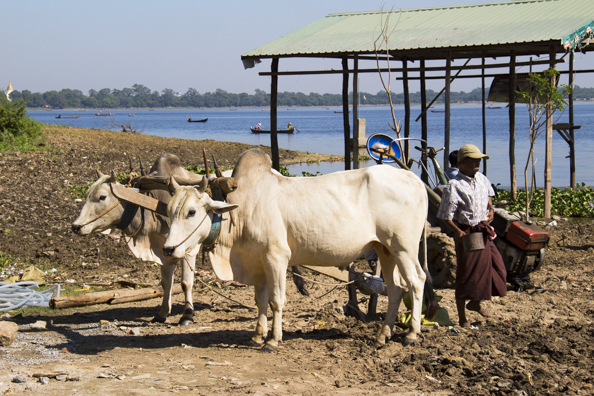 We could not linger enjoying this bridge that is so much part of local life as it was time to move on to Mahamuni Pagoda the home of a spectacular image of Buddha cast in bronze and covered with thick layers of gold leaves. This image was brought from Mrauk-U to Amarapura by King Bodawpaya in 1785. Every day crowds flock to the temple to watch the ritual cleansing of the Buddha’s face and to place gold leaves on the image. Only the men are allowed to do this and the women have to find a man to do it for them. We returned to Mandalay for a delicious lunch that included a pork and pumpkin stew and a Burmese beef curry at the Green Elephant Restaurant . 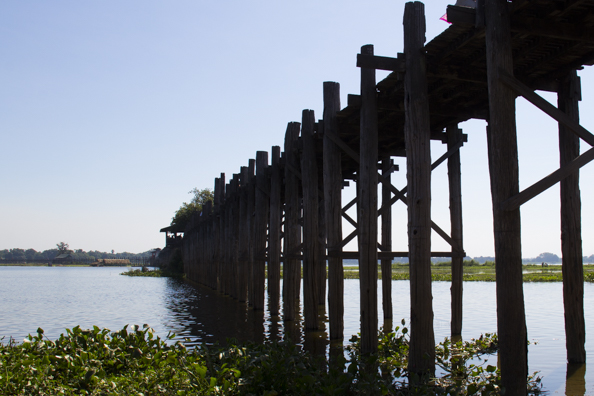 After lunch we explored the old part of the city of Mandalay starting at one of the gates in the wall that surrounded the old Mandalay Fort and Palace. The original palace was built in 1857 for King Mindon Min shortly before the arrival of the British who used it as a centre of government. At the end of the Second World War the British shelled the fort and destroyed all the original wooden buildings. During the 1990s the Royal Palace was reconstructed but it is just a replica and does not convey anything of the history of that era. I preferred the sense of mystery conveyed by the walls especially as we gazed across the moat around these walls to the summit of the Hill of Mandalay – a very special place whose summit is peppered with pagoda roofs. 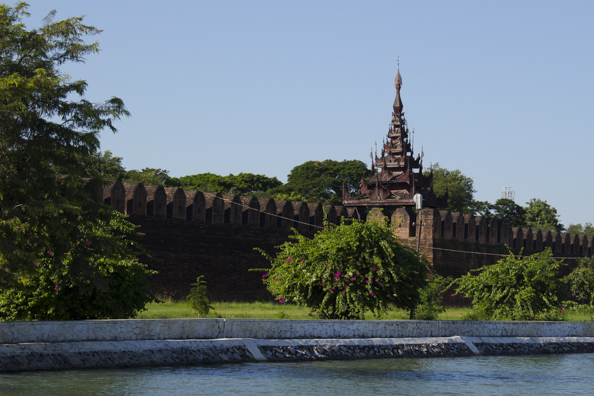 The only original building still standing is the Shwe Nan Daw Kyaung or Golden Palace Monastery nearby. This superb example of traditional wood carving techniques is a fragile reminder of the old Mandalay Fort (see notes below). It reminded me of a novel I had read recently, The Glass Palace: by Amitav Ghosh that had brought this period of Burmese history to life for me. This building is a masterpiece of traditional wood carving techniques as the interior and exterior are covered with carved teak panels. The panels inside are still in excellent condition but many of the exterior panels have been removed due to damage by bad weather. The building is now empty as the monks were asked to vacate it due to the risk of fire. 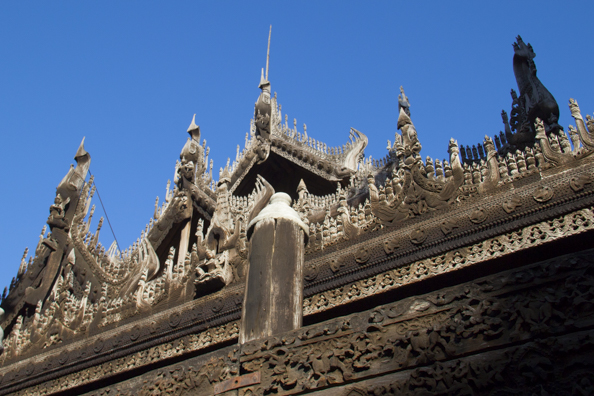 Our next stop was the Kuthodaw Pagoda which is also known as the world’s largest book because it features 729 marble slabs engraved with Buddhist scriptures. Each marble slab is housed in a small white structure and rows of these surround a golden stupa. I really liked this pagoda as it had a great sense of space and it was pleasant to wander around it watched over by the pagodas on the top of the Hill of Mandalay nearby. 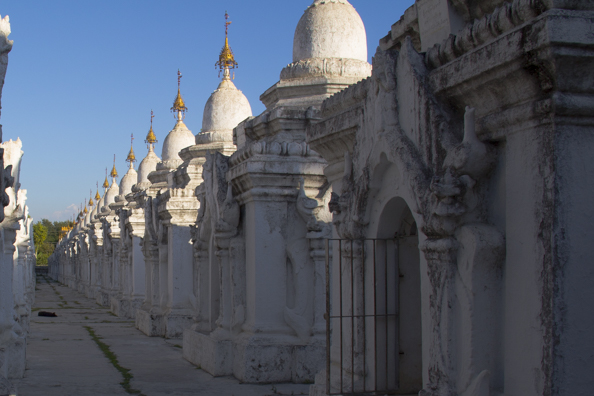 Our bus could not drive to the top of Mandalay Hill because the road is too narrow so we did the ascent in the back of a local truck seated on bench seats on either side. On arrival we left our shoes in the vehicle and took the escalator up to Su Taung Pyi Pagoda one of several pagodas on the hill top. At an elevation of 236 metres it commands a stunning view of Mandalay and the surrounding countryside. The hill is revered as a holy place because, according to legend, the Buddha came here and prophesied that a great city would be founded at the foot of this hill. We watched the sun setting before making our way back down to the city below. 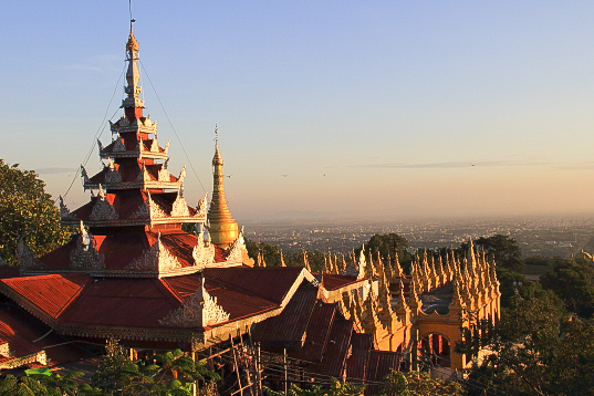 A burst of song from the pagoda next door and the crowing of a cock fitted nicely with my excited anticipation as that day was our boat trip on the Ayeyarwaddy River to Mingun, an hour upstream and part of the famous Road to Mandalay – we were about to re-live the poem by Rudyard Kipling. Several boat loads of pigs on their way to market chugged past us and we exclaimed in admiration at the pyramids of oil drums piled on top of the small working boats. Half way through our journey the crew laid out some souvenirs for our inspection – books with beautiful photographs of Myanmar proved to be very popular. 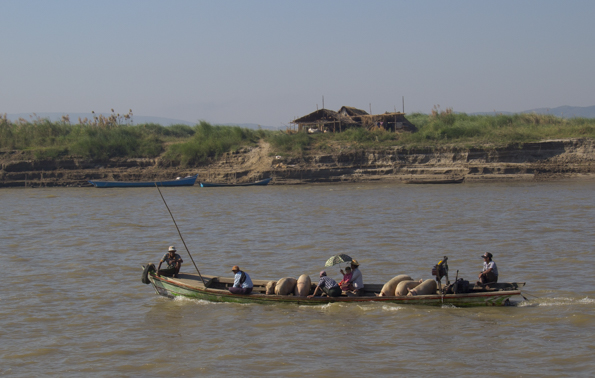 We disembarked down a single plank holding on to bamboo pole supported by a crew member at either end as our handrail. Almost immediately we were presented with the impressive sight of the unfinished Mingun Paya or Pahtodawgyi Pagoda. It is also known as Bodawpaya’s Folly after the king who nearly completed it. Several theories surround the reason for its construction and unfinished state. Some claim that Bodawpaya was intent on building the biggest pagoda in the world and gathered an army of thousands of slaves and prisoners to start erecting this monument in 1791. Work stopped in 1819, when the king died some claim because it was just too big to complete. An alternate theory is that it was finished and the top was deliberately left flat. But this seems unlikely as there was no precedent for a design of this nature. Others claim it was deliberately left unfinished due to a prophecy that the country would fragment if this monument was completed. Certainly if it had been finished it would have been the tallest pagoda in the world at 150 metres. It is nevertheless still a very impressive structure with its large vertical crack the result of an earthquake in 1838. 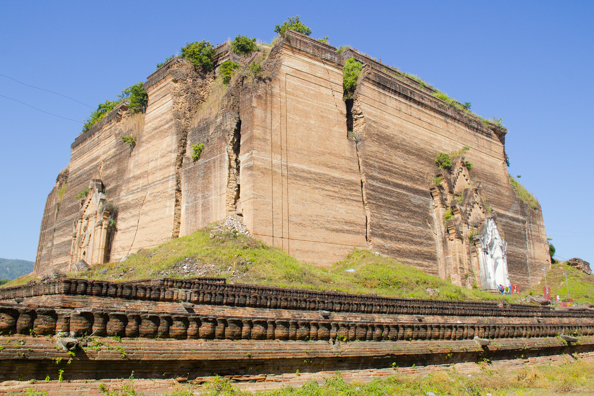 We continued on our way along the main street of Mingun to the building that houses the huge 87-ton Mingun Bell, the world’s largest un-cracked and ringing bell. We walked but other visitors used a wide variety of vehicles queueing up to convey them including ox carts, motorised tricycles and four by fours. 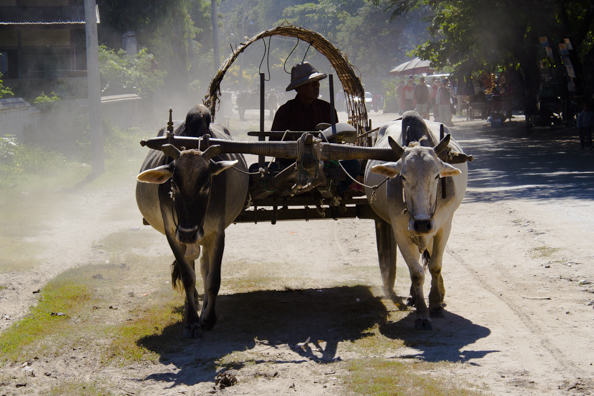 After inspecting the bell we carried on to the beautiful Hsinbyume Paya pagoda. Built in 1816, possibly using materials pilfered from Mingun Paya, this unusual pagoda is supposedly a representation of the Sulamani Paya that, according to the Buddhist plan of the cosmos, stands on top of Mt Meru, the mountain that stands at the centre of the universe. The stupa is surrounded by seven wavy whitewashed terraces representing the seven mountain ranges around Mt Meru. From the top terrace there are some lovely views of the surrounding countryside. 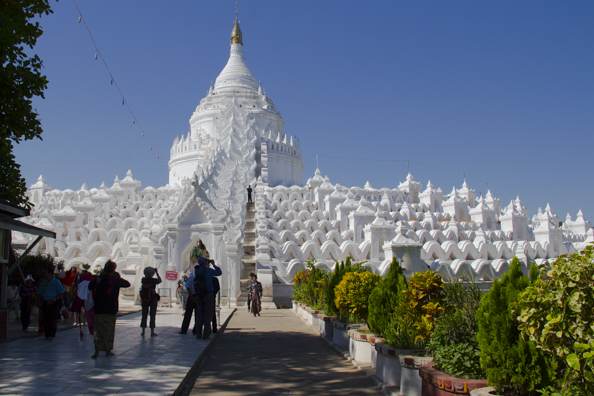