Yangon and a Trio of Temples

Despite a constant ebb and flow of visitors Shwedagon Paya in Yangon (also known as Rangoon) was a place of peace and serenity. Clusters of individuals worshipped in silence around the many small shrines offering up beautiful fresh flowers and fabulous foil decorations. The soft murmur of voices drifted from the open shaded areas around the perimeter as families and friends enjoyed picnics together. This was a place of pilgrimage and some would have journeyed a long way to worship here at the most important Buddhist temple in Myanmar. 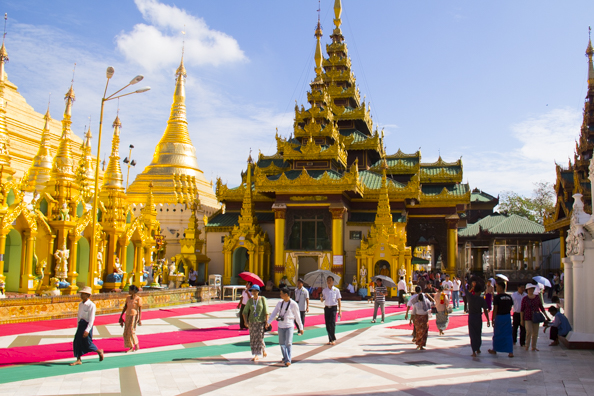 Before we could enter the temple we had to take our shoes off which is a requirement for all Buddhist temples. I wished I had worn some slip on sandals rather than socks and trainers as my sensible attire was particularly tiresome when putting them back on again but our driver seemed to have an inexhaustible supply of wet wipes. As we waited for our tickets to be purchased we were amused by the sign that said that ‘spaghetti dresses’ were forbidden – having been forewarned we were all properly dressed with shoulders and knees covered. The admission fee, which goes to the government, includes a lift ride to the raised platform of the stupa. Most local visitors walk up the stairs of one of the four long graceful entrances, by far the more exciting method of entry, but we did not have time. Only two of the entrances have lifts and we took the one to the south entrance where we began our circuit of the stupa. Even though it was still early it soon became very hot but help was on hand and red carpets were rolled out to protect our bare feet from the hot marble paving stones. 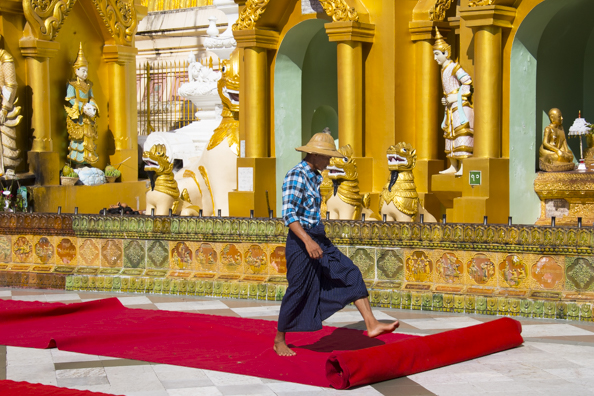 It is a massive site populated by hundreds of images of Buddha in a variety of poses each of which has some significance. Particularly interesting were those that represented the day of the week on which a person was born – there was a steady stream of people praying in these shrines and then pouring water over the images therein and the flowers that other visitors had put in front of them. There are eight of these shrines, one for each of the eight days of the week in Asian astrology (Wednesday is split into two days). A few of them bear inscribed plaques in both English and Burmese which contain information about Buddhism and the teachings of the Buddha. 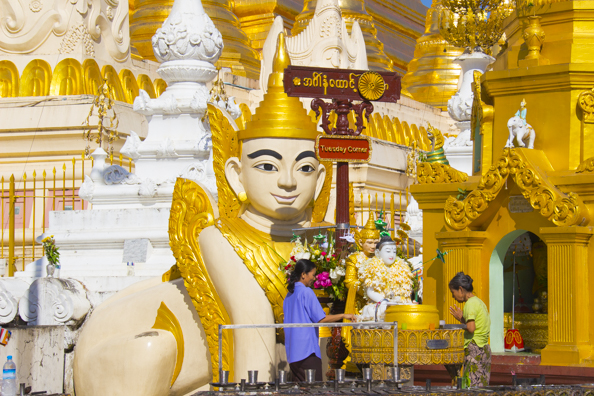 Shwedagon Paya is one of the world’s most spectacular religious monuments and the many towers of the main pagoda are covered with sixty tons of pure gold and the top of the stupa is encrusted with 4531 diamonds. It is the heart of Buddhism in Myanmar (also known as Burma) and as the most sacred of all the Buddhist sites the one that all Myanmar Buddhists hope to visit at least once in their lifetime. Its stupa is visible from almost anywhere in the city and most people try to get a good view of it at sunset to enjoy the image of the dying rays of the sun reflected in its gold and jewelled cladding. 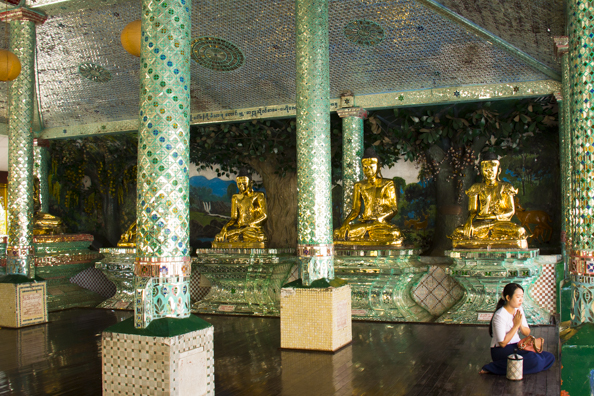 As we explored this fascinating place the frustrations of the morning soon drained away. I knew that changing money in Myanmar could be an issue and undamaged American dollars were recommended. I had some pristine dollar notes in my wallet but the hotel had refused to change them at the going rate as they had been folded over in the wallet. I had decided not to accept a lower rate of exchange and to rely on an ATM. When I had tried to find an ATM I was told that they had been installed by private companies and not the banks so the links were not very reliable and the charges are high. Not having any spare cash was actually to my benefit as there was temptation everywhere in the numerous souvenir stalls that lined the street leading to the temple. It was interesting watching people of all ages immersed in their acts of devotion. 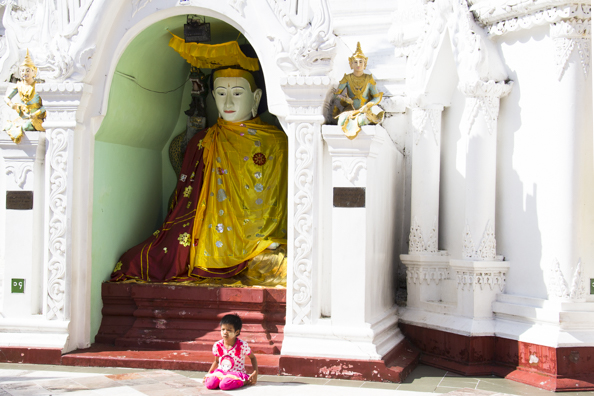 As we drove to our second temple, Sule Pagoda, I commented that our bus was left-hand drive even though Myanmar now drives on the right. When it was a British colony they drove on the left and changed to the right in the seventies but there are still some very old vehicles on the road. When the British killed the last Burmese king, Alaungapaya, and colonised Myanmar they changed the name of the country to Burma and Yangon was re-christened Rangoon. Along with their independence the inhabitants of Myanmar have also reclaimed the original names. After Alaungapaya had united Myanmar he had made Yangon his capital in 1753 and so it remained until 2005 when the capital was moved to the newly built Naypyidaw . 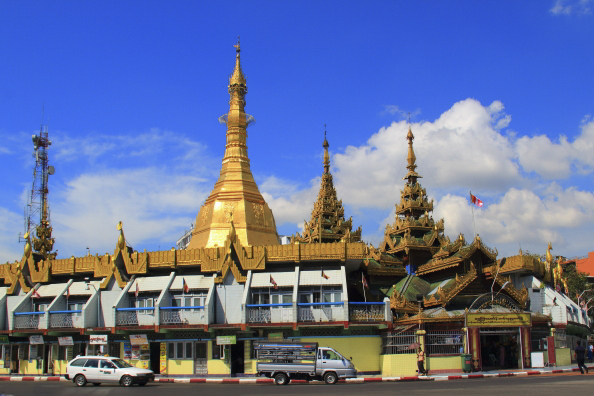 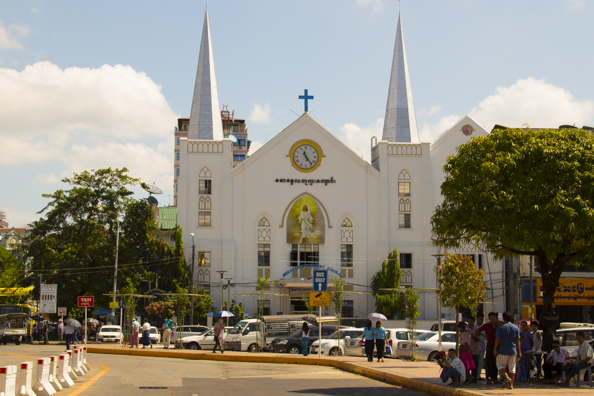 The two thousand year old Sule Pagoda is on a traffic island in the old colonial-style city centre. Its forty eight metre high (152 feet) golden dome was used by the British as the nucleus of their grid pattern for the city when it was rebuilt in the 1880s. This pagoda has an unusual octagonal shape which it retains as it tapers to the spire, an inverted bowl, and the bell. This pagoda is said to enshrine a hair of the Buddha and its Mon (an ethnic group of Myanmar) name, Kyaik Athok translates as “the pagoda where a Sacred Hair Relic is enshrined”. It is surrounded by small shops and all the familiar non-religious services such as astrologists and palmists. Despite the bustle outside and it’s much smaller size there was still an air of calm and tranquillity within. 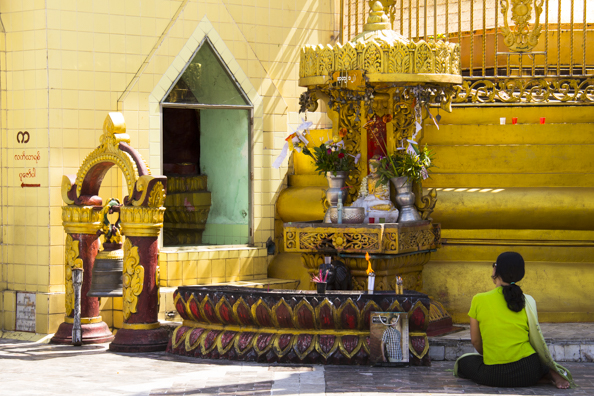 In the Sule Pagoda we were introduced to the custom of buying tiny sheets of gold leaf to paste on temples and gods. Here the gold leaf is pasted on to the stupa and as it is not possible for visitors to go up there and the strips are so thin they are too delicate to be carried they are transported by a model boat on a pulley. Workmen on the stupa stick them on to the dome of the stupa. Situated in the busy downtown area it is not unusual for visitors to pass by without noticing it. Legend says that Sule Pagoda marks the site where King Ukkalapa held meetings to discuss the building of Shwedagon. “Su-Wei” is a Myanmar word meaning “meeting” and over the years Su-Wei’ was corrupted to ‘Su-Le’. Successive town planners, King Thayawaddy, Montgomery Fraser and others all decided to keep Sule Pagoda as the centre piece of Yangon because of its strategic location, religious significance and artistic beauty. It can be reached by stairways inside the four entrances facing four cardinal directions or by two overhead bridges. 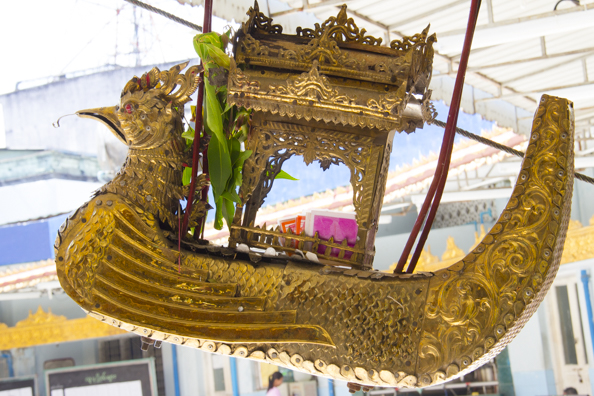 On our way to our third temple we briefly visited the Karaweik Barge or Karaweik Hall a replica of the royal barge but three times its size and used for functions. It is on the shores of Kandawgyi Lake, an artificial lake that once supplied all the water to Yangon. Some of us had already seen this barge from the far side of the lake as our hotel, the Green Hill Hotel, was just ten minutes’ walk from the park that surrounds this lake. Just inside this park was the Royal Garden Chinese restaurant and even though there was a wedding in full swing we were able to order some lunch and watch the proceedings. After eating we had strolled around the lake. Other members of our group had taken advantage of some free time to get the Yangon Circle Line train (there are air-conditioned and non-air-conditioned versions of this) to do a tour of the city at the very reasonable price of one American dollar. 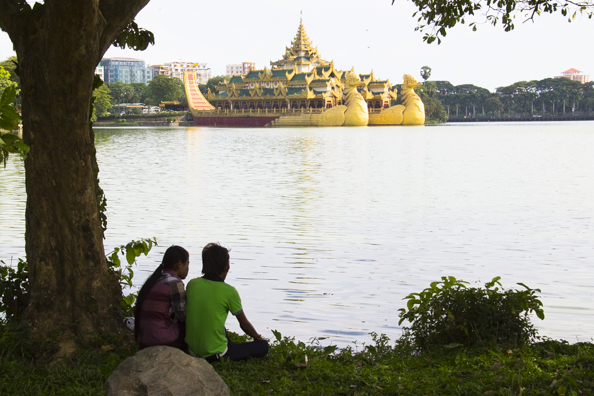 The Chauk Htat Gyi Pagoda is famous for its enormous sixty-five metre long Reclining Buddha housed inside what resembles an aircraft hangar. The original Reclining Buddha was made in 1907 but by 1966 it was in such a poor state of repair it was decided to restore it. During these renovations about five metres were added to it. These renovations were entirely funded by donations from Buddhists and foreign tourists and their names are written on the beams of the building. Buddhist people pay their respects to this very colourful image by burning incense sticks and offering flowers. 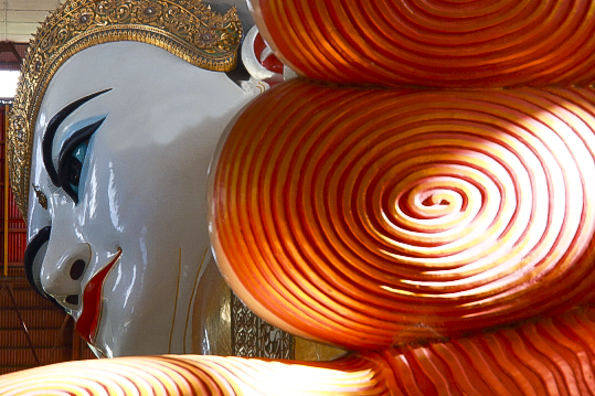 Before we left Yangon we visited the famous Scott Market which was first opened in 1926 and named after Mr C Scott who was then the Municipal Commissioner. Both the market and the road where it is situated were renamed Bogyoke Aung San Market in Bogyoke Aung San Road in memory of General Aung San who was assassinated in 1947. The building that houses the market is one of the best preserved colonial buildings in Yangon. The market was a delightful mixture of wares from cheap toiletries to expensive jewellery. There were more stalls outside the market and on the pedestrian bridge and these included several food stalls. 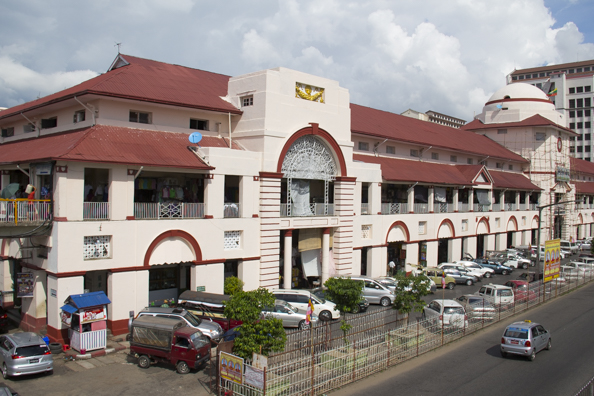 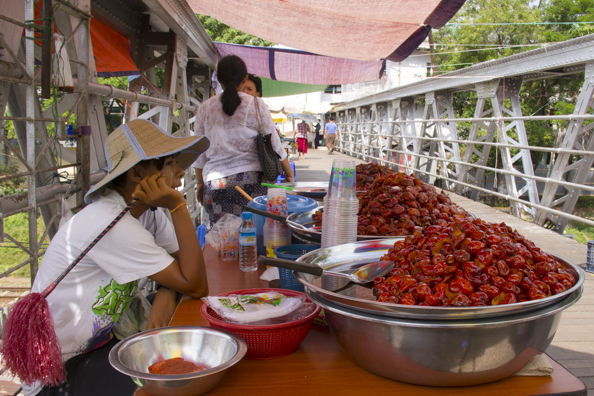 After exploring the market we ate at the French restaurant, La Planteur, where we had our own private dining room that overlooked the gardens. Our meal was amazing and the service was a well-rehearsed performance. Having resolved my cash flow problem by approaching a different receptionist who gave me the full rate of exchanged for my dollar bills I could relax and enjoy my meal.