The Wonders of Lake Inle in Myanmar

I was woken by the murmur of the long-tailed boats from the lake beyond the gardens of our luxurious hotel, Amata Garden Hotel. The smell of rose petals lingered in the air around me but not from the bushes in the flower beds – they were floating in my bath. Due to an over-booking situation I had been accommodated in a suite that was the temporary home of the hotel spa. But I’ll save that story for another time. 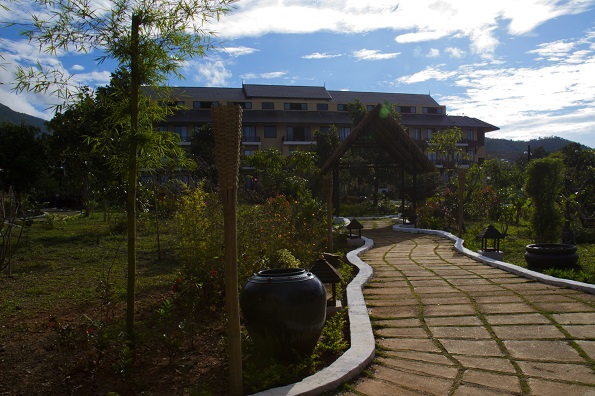 The hotel is set against a backdrop of the beautiful Shan hills on a channel that leads into Lake Inle. The lake, twenty-two kilometres long and ten kilometres wide, has a population of some 150,000, many of whom live on floating islands. We had arrived the previous evening in the dark so we had not appreciated the beauty of our surroundings. Our journey had started in Nyaungshwe on the shores of Lake Inle after a very nice lunch in the View Point restaurant overlooking the river that leads into the lake. 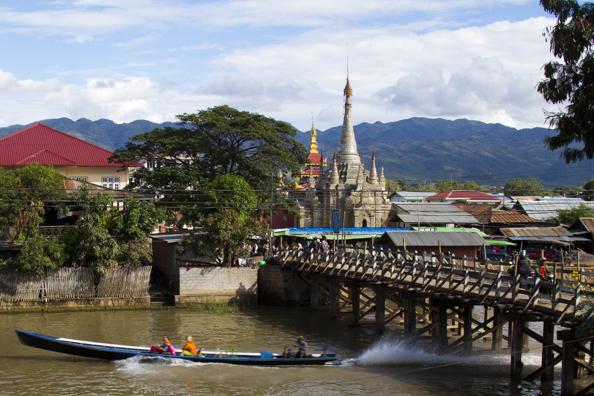 We had raced across the lake and then turned down a channel and threaded our way through the busy village of Ywama, the largest on the lake whose streets are a web of canals. We passed some beautiful Teak houses built on large wooden piles driven into the lake bed before disembarking and walking through Indaing village. On the far side of the village a long covered walkway, lined with souvenir stalls, leads up to the ruins of the pagodas at Nyaung Ohak and Shwe Inn Thein Paya . By the time we got there all the stalls had been closed and it was eerily deserted as humps of covered souvenirs lined our way. But when we emerged from the shadows a charming sight greeted us – a crazy mixture of ruins, restorations and replicas mingled with encroaching vegetation. We were looking at the remains of over a thousand temples built between the fourteenth and eighteenth centuries. We strolled past weather beaten zedi whose rusted pinnacle decorations no longer chimed in the breeze. As we reached the highest point the sun went down and the sky glowed pink. Despite the urgings of our guide that we needed to return to our book we lingered there trying to capture the magic with our cameras. But finally, appreciating the danger of negotiating uneven paths in the dark we dragged ourselves away and returned to our boats by torchlight – one between three. Our boats were not equipped for night riding but we managed with the one powerful hand held light on board. It was an exhilarating experience enhanced by the sight of a small island being rowed along by some locals. 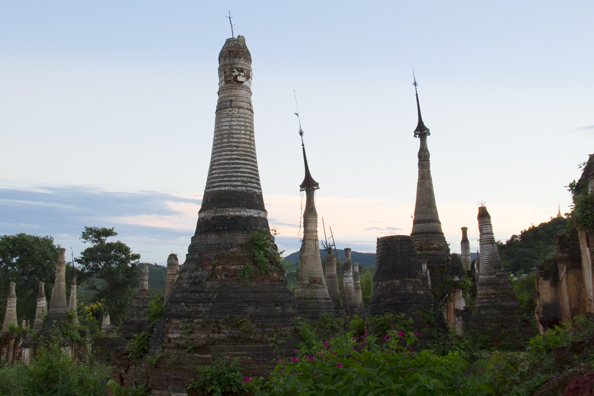 The day ahead promised to be just as thrilling. Although it was still early the hotel jetty was already a hive of activity the boat is the only form of transport. We filed on board our boat which had six single seats in a line each one with a bottle of water, an umbrella and a waterproof cape in the pocket beside each one. These boats resemble a large canoe but are powered by an elongated engine, hence the name long-tailed motor boat, and when the motor is lowered into the water it creates a spray behind the vessel. These boats are used to cross the lake although the Intha people, one of several tribes that inhabit the area, get around in traditional flat bottomed boats using a unique and skilful form of leg rowing. Lake Inle is the only place in the world where this technique is practised and we were fortunate that soon after we began traversing the lake we spotted some local fisherman and slowed down to watch them pulling in their nets and rowing simultaneously. 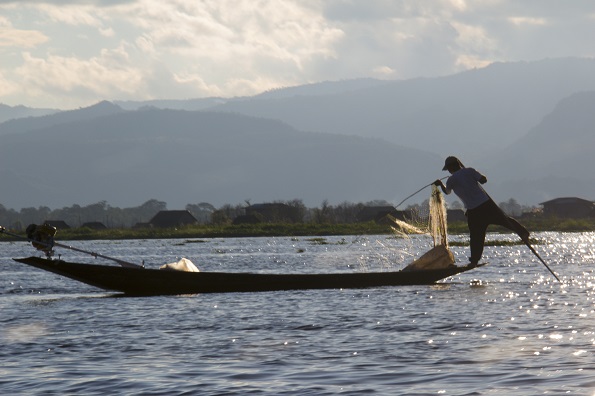 Our first stop was the Phaung Daw Oo Pagoda one of the principal shrines in Myanmar and the holiest religious sites in the southern Shan State. This pagoda is the home of five small Buddha images, revered by the lake-dwellers who purchase very small sheets of gold leaf to stick on the images. Over the years the images have metamorphed into five indistinguishable rounded shapes. Every year around the end of September – beginning of October the pagoda hosts a festival four of the five Buddha images tour around the lake in a colourful barge which we had passed stored in a huge shed close to the pagoda. 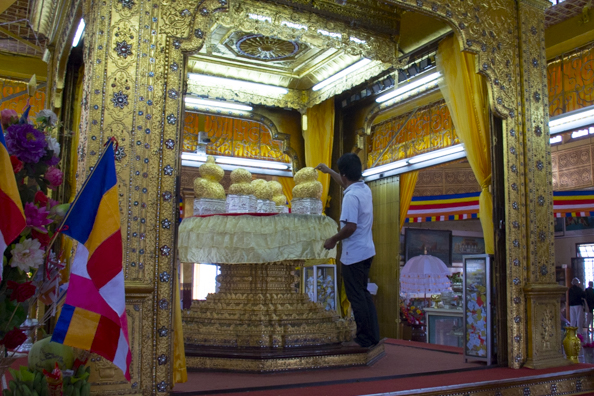 We embarked for the short distance toYwama village (short form) the home of some very skilled silversmiths. After alighting there we made our way along narrow hard-baked paths to a complex that included a silversmith’s workshop and a complex that included several small industries – paper making, paper parasols and hand-weaving by the long necked women, the Padaung. These women wear brass rings the number of which is increased regularly to enlongate the neck. Throughout our visit we were shadowed by friendly street vendors anxious to sell us their wares. 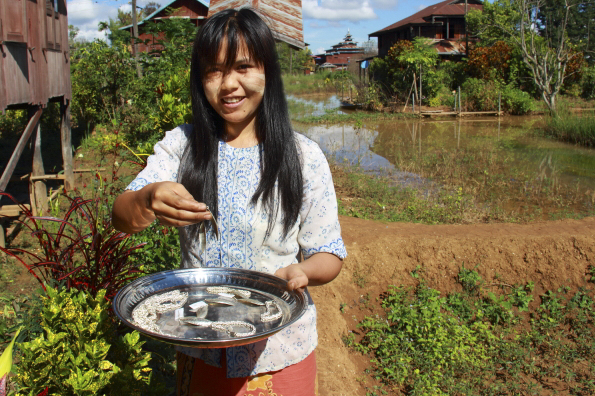 Our next stop was in the village of Inphaw Khone Village where several large wooden buildings house wooden handlooms for weaving silk and thread made from the stalks of the lotus blossom. The whole process takes place here as they spin the thread and colour it before weaving it into delicate scarves and other accessories. They also weave robes for the Buddhist monks but these are only made with lotus thread. There was also a shop on the site where the prices are fixed. We subsequently discovered that most of the finished products are sold in the local markets at more attractive prices. Children played around us as we explored the workshops. They were wearing the regulation white and green uniforms of the primary schools. Because there are not enough schools in the country for all the schoolchildren they only attend for half a day. 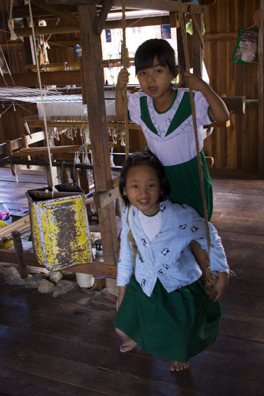 We moved on to the Inthar Heritage Centre and Restaurant where we had lunch around a large table on a balcony overlooking the lake. While we were waiting for our meal to be prepared we were shown the thirty-six Burmese cats that are kept at the centre. These pure bred cats were returned to Myanmar from Hong Kong and are kept at the centre to prevent them mixing with other breeds. The setting and the food were lovely – we had a spring onion starter followed by crispy fried spring onion and then a fish soup with vermicelli. 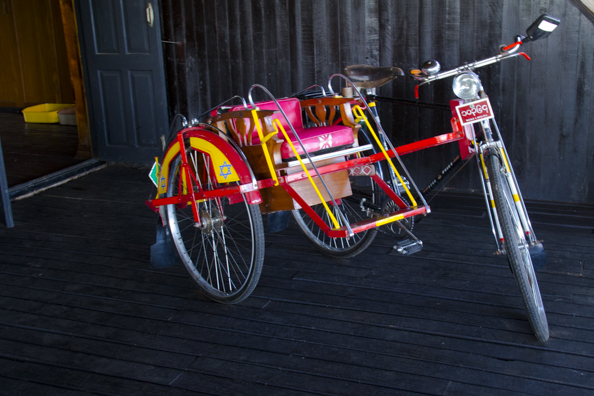 After lunch we explored the network of narrow canals that criss-cross the floating vegetable gardens on the lake. These cultivated islands cover a huge area and they are tended by people in boats. Each time a motor boat went past at speed the gardens rippled in their wake. 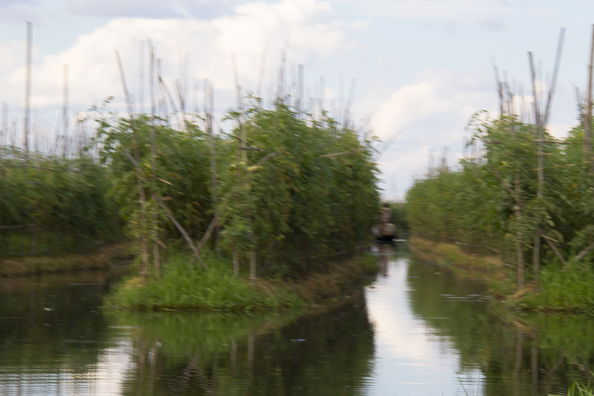 Our last destination of the day was the Nga Phe Kyaung Monastery an attractive wooden structure built on stilts over the lake at the end of the 1850s and one of the oldest monasteries on the lake. Inside, in its large wooden meditation hall, there are over 200 year old ancient Buddha statues. It was nicknamed the jumping cat monastery because a monk taught the resident cats to jump through a hoop but after this monk died the practice stopped and the cats are left to their own devices. 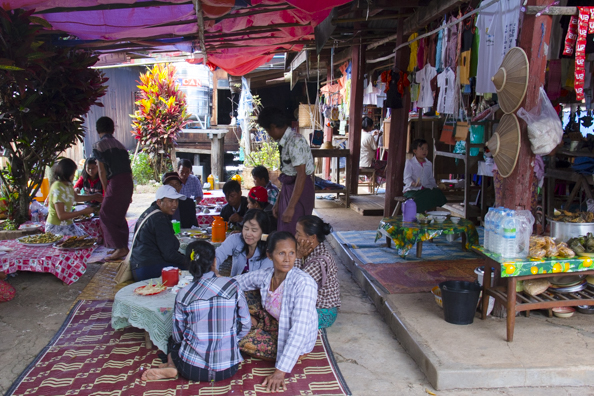 That evening we relaxed in the covered open-air bar at our hotel discusses the sights we had seen before enjoying an excellent meal accompanied by some very loud drumming that was part of the local entertainment. We had a late start the next morning so we had time to relish our meal and splendid surroundings – a feast of marble and water features. As we had returned that afternoon we had seen the large sites that had been cleared to build more hotels close to the lake so it seemed the peace we were enjoying would not last much longer. 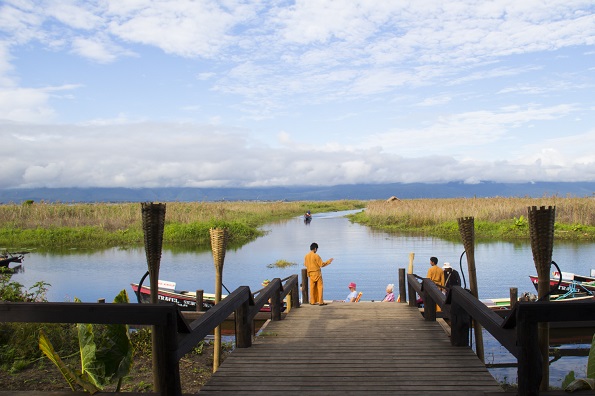 Local markets are often so-called to attract tourists but this was not the case at Nampan a village market bursting with locals and local produce. I spent some time at a rice stall where locals tasted the steamed glutinous rice before a purchase was agreed and it was then stuffed into bamboo shoots. Elsewhere the stalls were a riot of flowers, fresh vegetables and utensils. 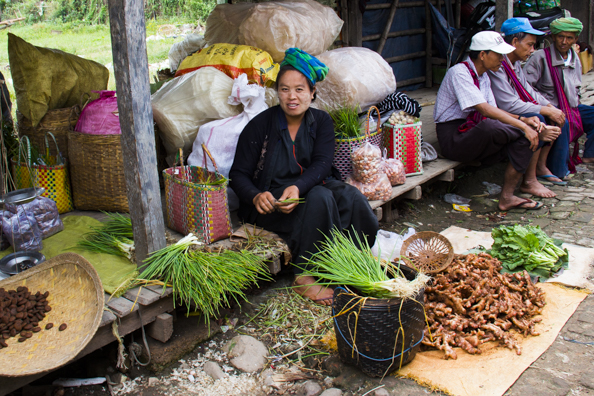 After the market we crossed the lake to visit a boat-builder’s yard where both the motor boats and the sanpans were built. It was here I bought my first souvenir – a teak plate for which I bargained hard despite being assured it would last a lifetime. We were distracted from our shopping at the site of some workmen enlarging the premises – they were increasing the size of the island with bricks of mud that had just arrived by boat. 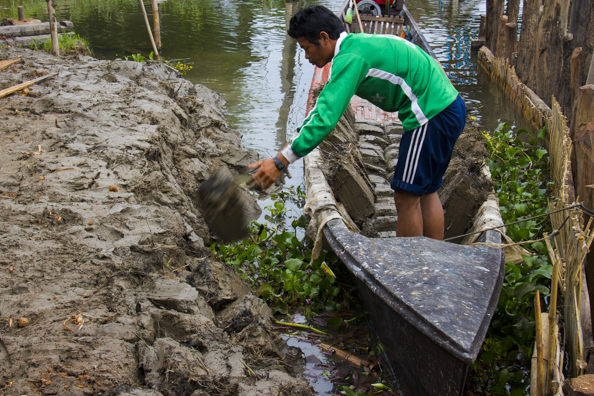 It was time to leave and as we made our way back across the lake I was able to create one final memorable image as we stopped to watch some fishermen smacking the water with their oars to attract the fish. These were the souvenirs I would cherish – images of one of the most interesting places I had ever visited. 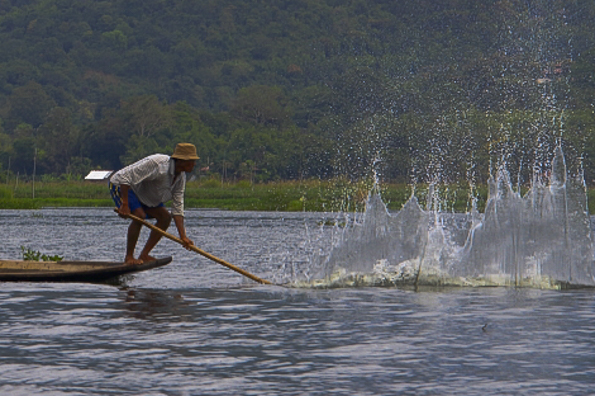 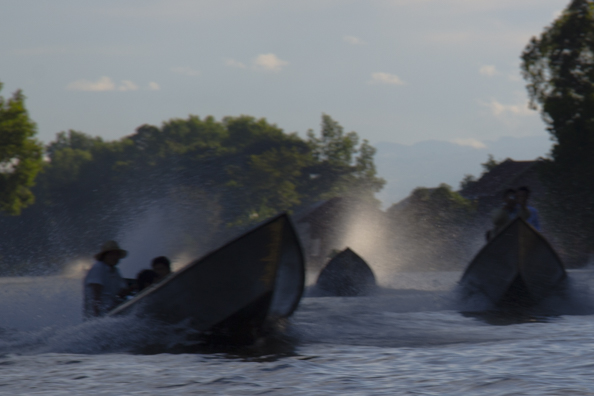