Glorious weather, lovely walks and vigorous bike rides are easing the strain of lockdown.  The UK Government reviewed the restrictions at the end of the third week and decided they should remain in place.

With a schedule of deadlines, I have a purpose and a programme for the long days ahead. But I still go out every day for some exercise and continue to discover more about my surroundings and observe how other people are dealing with the restrictions imposed on us during the coronavirus pandemic.

I am up early again this morning and out on the bike soon after 6 am. The roads are empty at this time so it does not matter that I wobble a bit when going uphill. After parking the bike, I head for the beach. It is very windy and very cold so I am surprised to see the Singing Swimmer striding into the water. She has a snorkelling mask on today so only the fish are going to benefit from her dulcet tones. I have been trying (and failing) to buy a small tripod for my iPhone so I can take images featuring myself. The ones I have found on the internet are either very expensive or out of stock. I suppose everyone is making videos to send to television stations for their fifteen seconds of fame. This is one shortage I never anticipated but I am not going to be defeated and make my own stand using some sturdy cardboard. It works very well and I manage to take videos of me jogging along the beach and scrambling on the rocks – just to prove jogging is possible post total replacement of both knees. 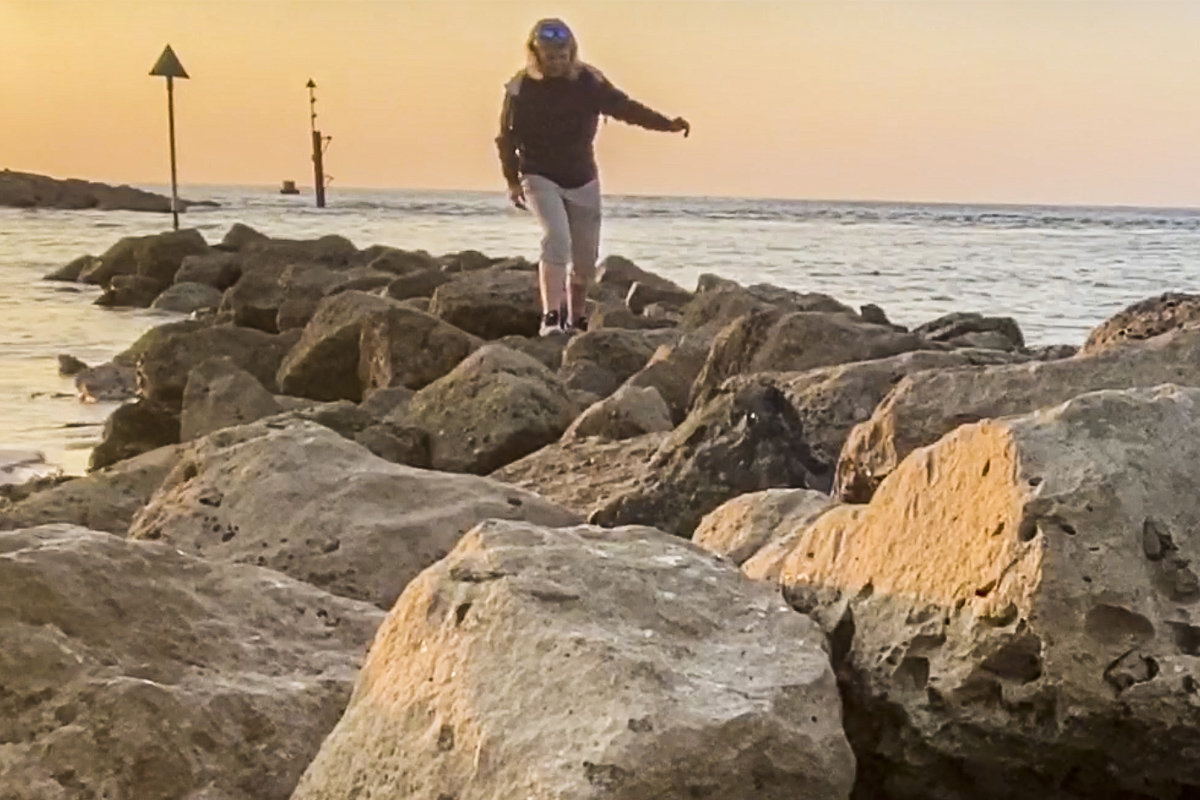 This morning instead of going out early I have some breakfast and watched the news. Spurs and Liverpool Football clubs have done a U-turn on putting non-playing staff on furlough. Spurs have also offered their new ground as a testing station for coronavirus initially for NHS staff and families. I cycle on my exercise bike for twenty minutes to make up for my lazy start. I have ordered a new clothes dryer from Argos but I need to go to Poole to collect if from Sainsbury’s. I get the bus into Poole and get off by Poole Park. I walk through this park and into Harbourside Park. This park, which leads to Poole Harbour features the Poole Cycle Speedway Track – a BMX bike track - and the old lifeboat station which has been converted into a small museum. I enjoy my walk in some very fresh air along the seafront. When I arrive at Sainsbury’s I discover that, although I am only collecting an item from Argos which is inside the store I still have to queue with everyone else. The queue is the longest I have seen yet but it is not too long before I got inside the store and collect my clothes dryer. I am the first to board the bus back to Poole and go right to the back of the bus. The woman who follows me onto the empty bus sits down immediately in front of me. I protest – she smiles, nods but does not move. I move. She is wearing a face mask so maybe she thinks she is invincible and so it is okay to breach the 2-metre social distance rule. When I get back to the flat I unload the washing machine and spread a towel across my new clothes drier. It collapses. 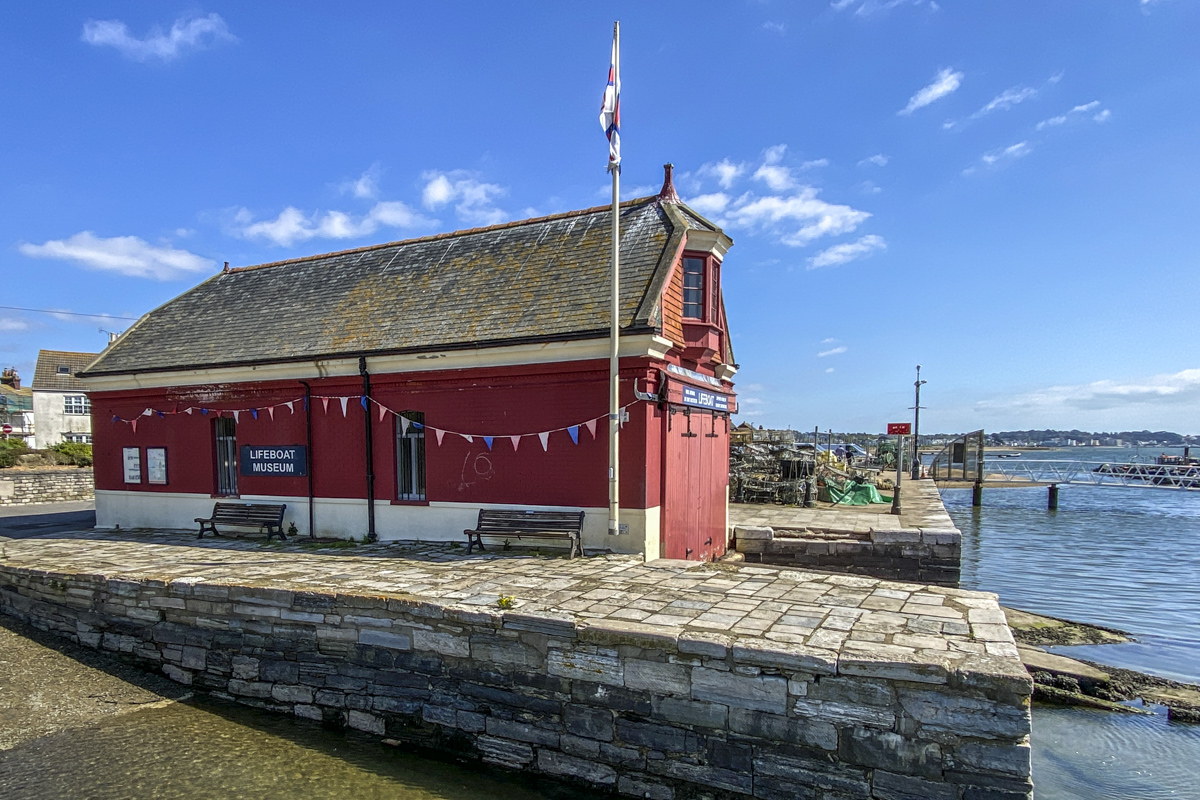 Back on the bike this morning and heading for the beach. I linger to watch some small fishing boats chugging out of Poole Harbour. Commercial fishing in Poole goes back a long way and it is famous for its long association with cockle fishing. More recently clams have also become a speciality. Today tourism and yacht marinas may dominate the Poole Town Quay its fishing industry is still important. This afternoon I listen to a pitching presentation using Zoom, some software I had to download to do this. It is particularly related to travel writers trying to find work during lockdowns necessitated by the spread of the coronavirus. The first thirty minutes were quite useful but then it devolved into a sales pitch. This has been followed up by almost daily emails telling me there is still time to join the presenter’s course. The presenter refused to quote prices during her presentation which made me a bit wary of further dealings with her. These have now been diverted to junk mail. 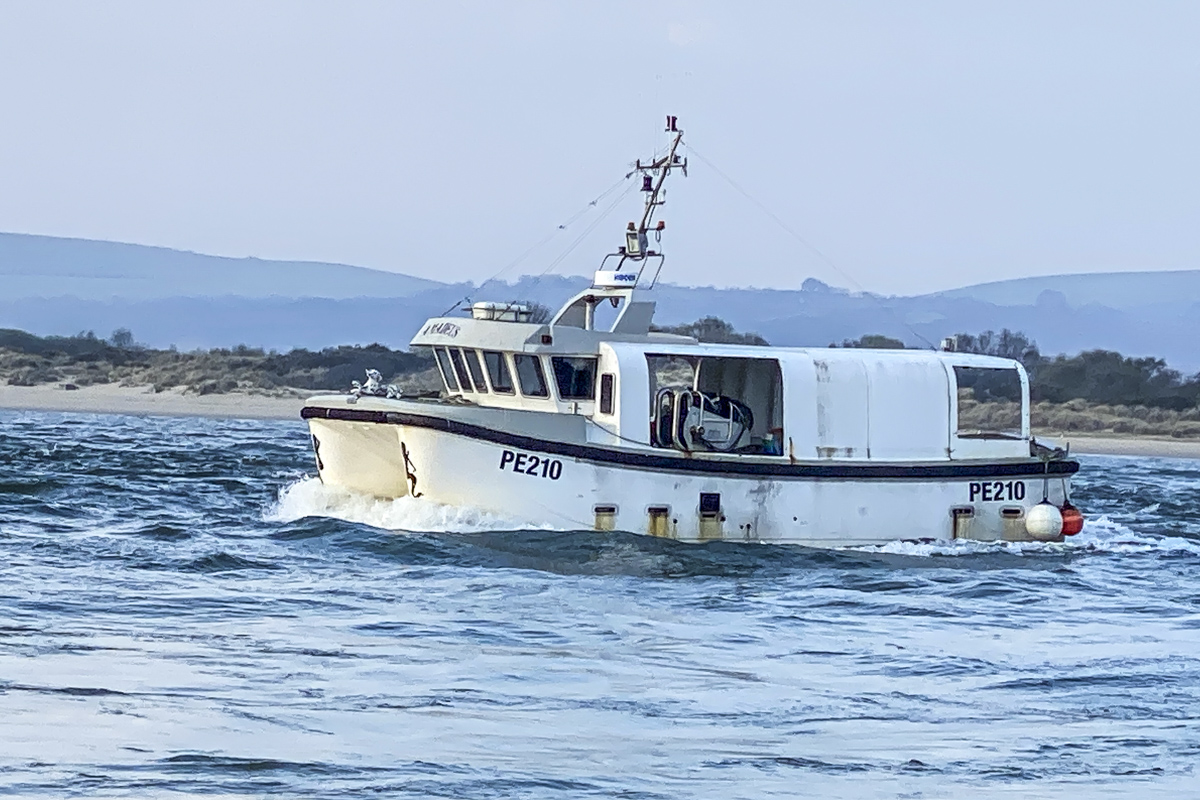 Another lovely day today. The wind has dropped and it is really pleasant both on the bike and strolling along the beach. I exchange greetings with the people I see every morning – from a safe two metres. One couple, in particular, have a dog that loves to play football. I stop and watch for a while. Of course, dogs are totally unaware of what is happening in the world today. All they know is they have company all day and lots of lovely long walks. I wonder if they will need counselling when life returns to normality – whatever that will be. When I get back to the flat I wrestle with the technology involved in writing for Travel Radar. No doubt things will change in the travel writing world so I am lucky to have the chance to work for this website. Even though writing for such a different readership has wrenched me out of my comfort zone I am enjoying the challenge. 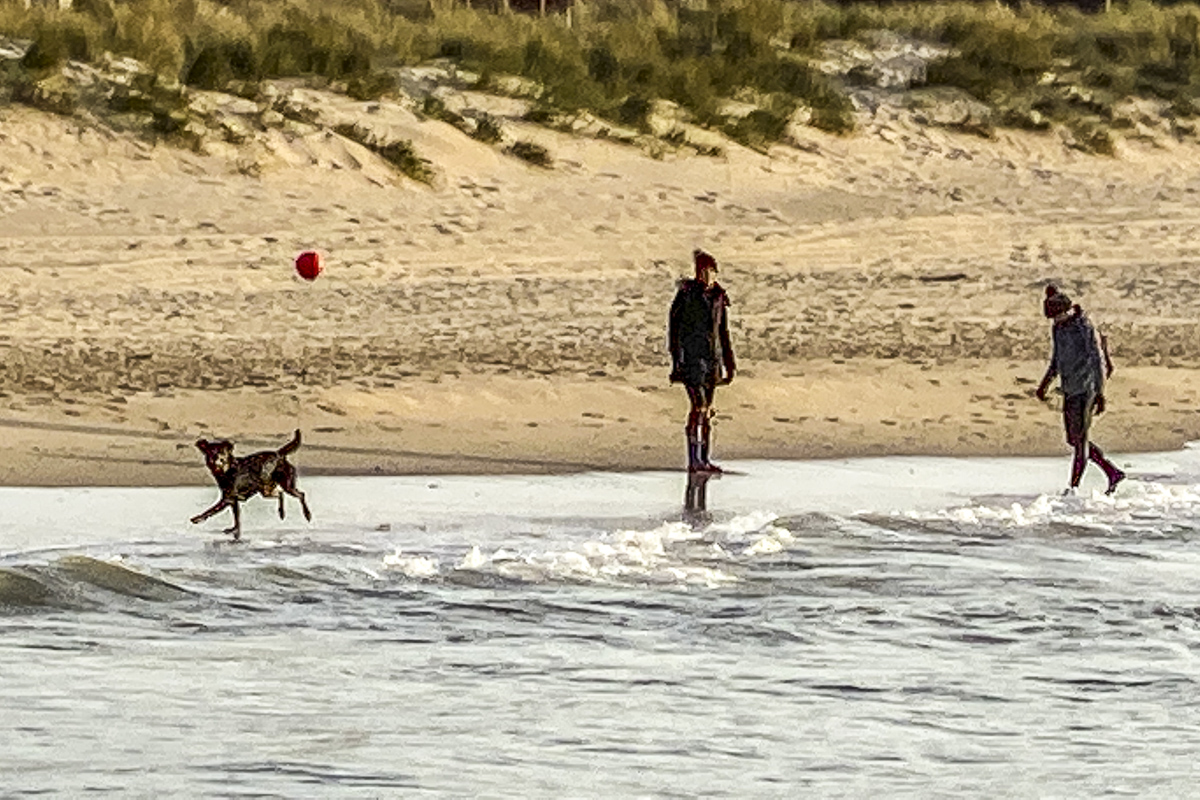 I am up earlier than usual this morning and arrive on the beach just in time to see the sun rising over the sea. It is so beautiful. On my quest to discover the origin of the rock-carved in the shape of a hand I have been told there is also a rock with a head carved on it. I find it just below the Haven Hotel. It is right next to the hand but I have never noticed it before. I have also noticed there are several rocks that have groves and holes in them as though they were once part of a large building. I still prefer this theory to the idea that they are simply rocks that student sculptors have been practising on. When I visited Swanage I discovered the town is peppered with strange stonework. It is quite possible some also found their way to Sandbanks. While walking I stop for the occasional chat with other regular walkers. I hear tales of outrageous breaking of the lockdown rules. For example, a couple who had been visiting their second home in Dorset, driving there from London. They were diagnosed with COVID19 while at their second home and were transferred back to London by ambulance. So, an ambulance was tied up for a whole day and they could have infected other people while they were in Dorset. The police are spending a lot of time turning back visitors to Dorset. It is amazing how many people think the rules do not apply to them – or maybe some people just don’t watch the news. I did see that an excuse for being one hundred miles away from home was that they were unaware of any lockdown. I suppose that is slightly more imaginative than the motorist who claimed he was driving from Nottingham to London to buy some bread as it was cheaper in London. No-one would ever have known what he was up to had he not been stopped for driving at 110 mph on the motorway. Having the occasional chat brightens up my day. 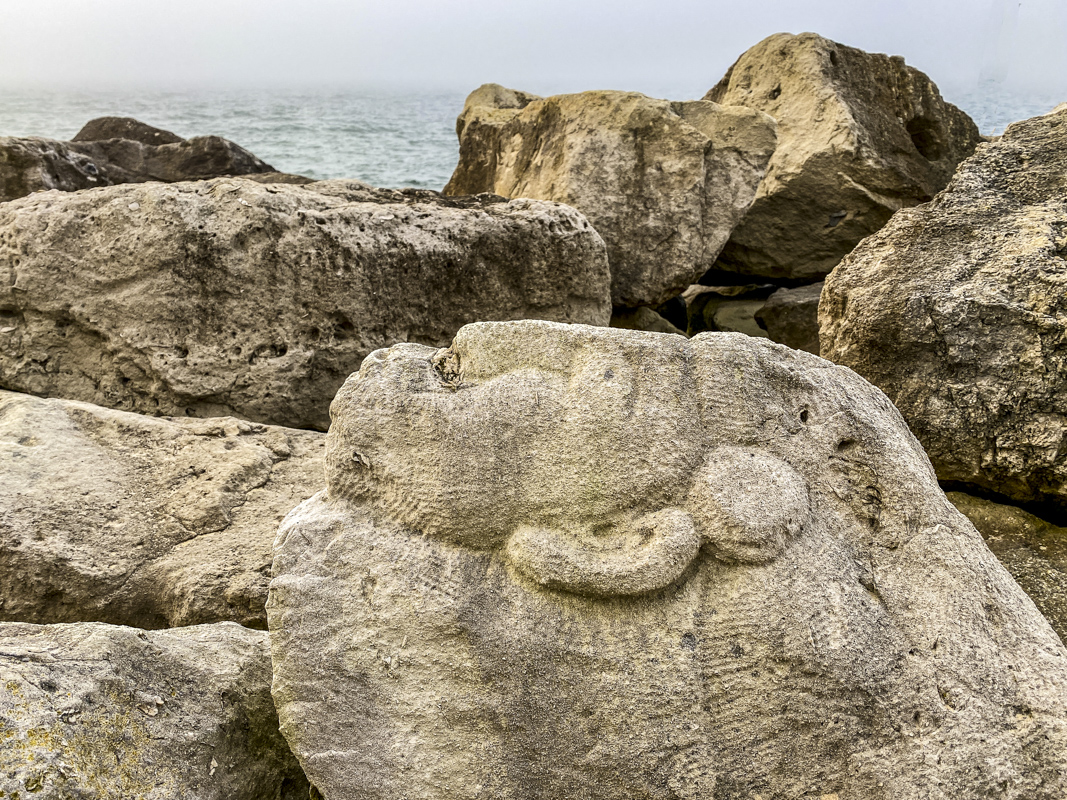 I have a very early start this morning as I am inspired regarding my next blog post for Travel Radar and I need to get writing before my thoughts evaporate. I need to get some shopping so I decided to get the bus to Poole. While I was waiting for the bus and gazing across the empty expanse of Poole Harbour I could not help thinking how it would normally be busy with kiteboarders skimming across the surface. I could drive to an out of town supermarket but as the buses are usually empty and the town centre is deserted the queues for Sainsbury’s are much shorter. It is also an excuse to have a wander around Boots and Wilco just in case there is anything I did know I needed. All the assistants in Boots are now standing behind Perspex screens and wearing face masks. The bus drivers also have a plastic curtain separating them from the passengers. As I was approaching Sainsbury’s I passed a homeless man sitting on the ground. I offered to buy him a sandwich and he accepted my offer. It must be difficult for the homeless who have to beg as we are encouraged to use contactless cards in shops so there will not be much cash around. However, it has been announced on the local news that they have nearly removed all the homeless from the streets in Dorset. This is some good news. 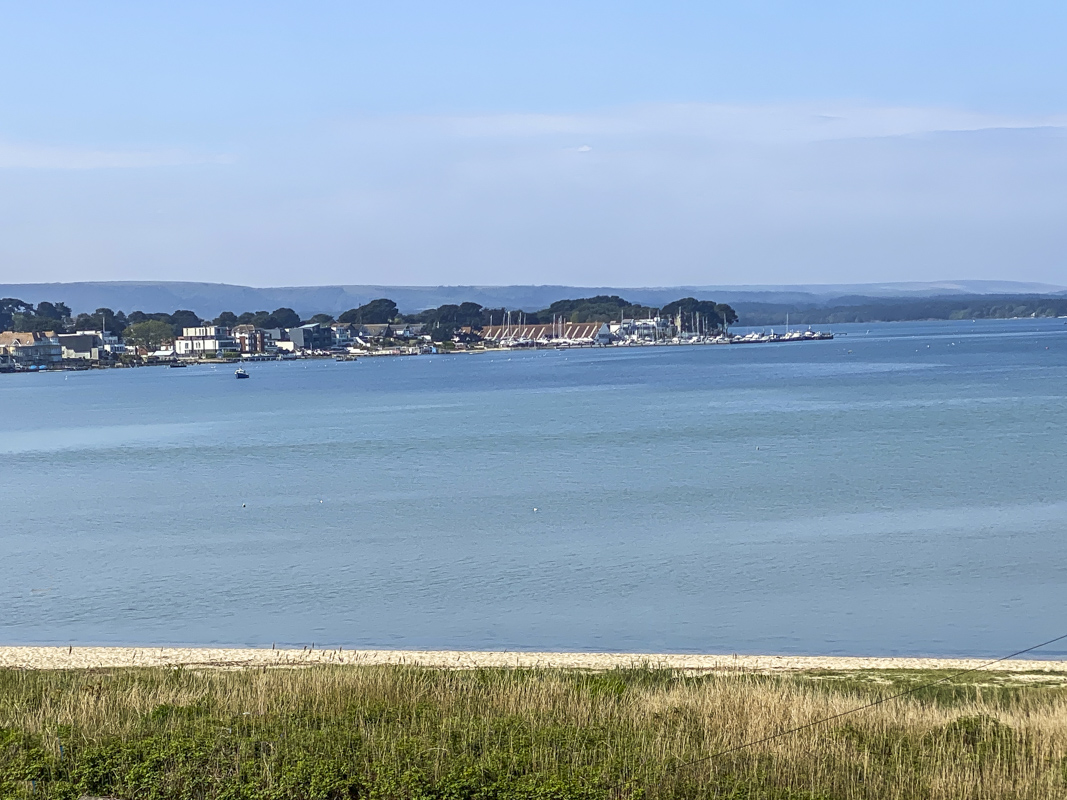 I start working as soon as I get up as I have an article to finish and I also need to work on the next instalment of this diary. It takes me until early evening to finish everything. By then I am ready for some fresh air so I get changed and go out. I have been watching an interesting development on the road below the flat. A group of young men have been gathering there. Some have been driven there with their bike in the boot of the car. Finally, they are all assembled but I decide to wait until they have set off before going out for a jog around the harbour. There is some confusion regarding the rights of pedestrians of cyclists on the path that encircles the harbour. There is a cycle track on the road that runs parallel to this path but most cyclists prefer to slalom pedestrians on the path. The group of cyclists are on the move. They pedal for fifty metres and then stop, push their bikes across the little beach and settle down in a huddle on the sand. So much for social distancing. I jog around the harbour and then cross the road onto the beach. For the first time, I notice the beach is fringed with sand dunes so I give my legs a good work out by walking up and down them. I get back to the flat just in time for the start of Race Across the World. The most gripping programme on television right now. This is the second series and I am watching the first series on the BBC iPlayer. I try to ration it to one episode a day but the urge to know who wins is defeating this resolution. 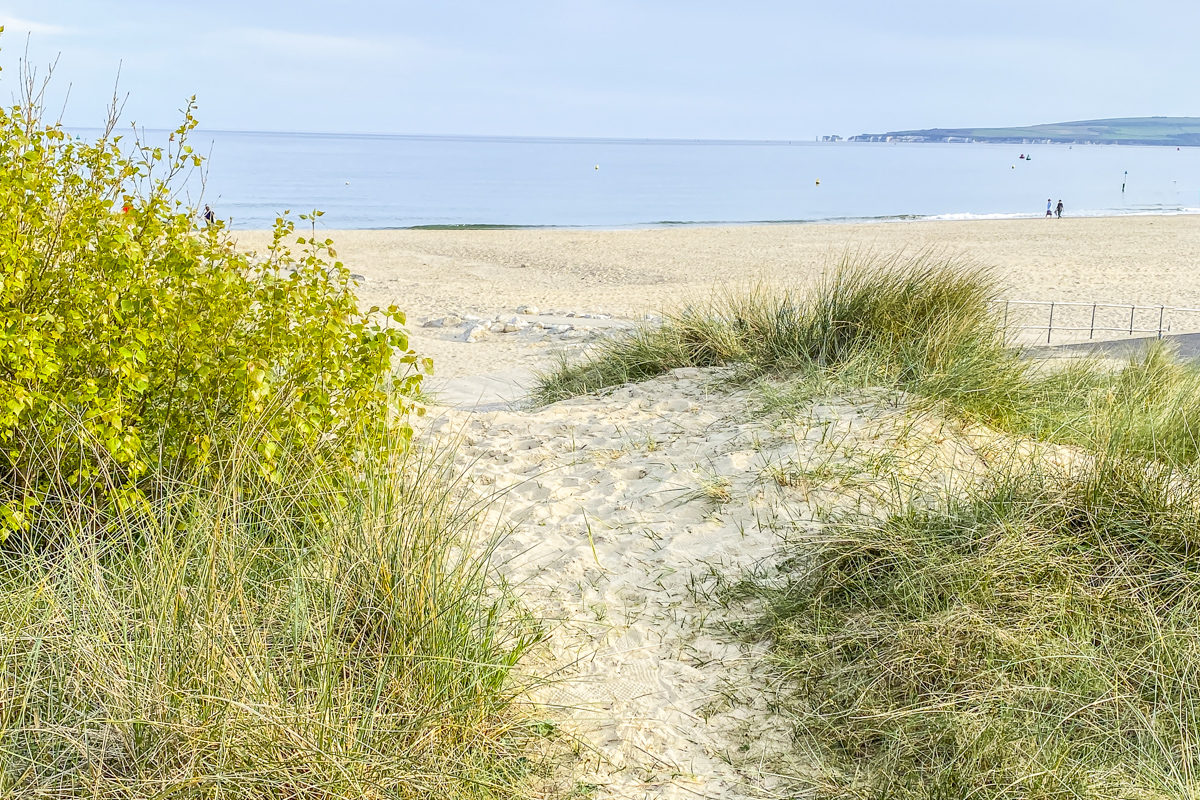