Swanage – A Story in Stone

As I meandered through crowds of holidaymakers dodging swinging buckets and whirling spades I found it hard to believe that Swanage had once been a simple fishing village on the Dorset coast. In those days the centre of the community had been the Mill Pond and it was here I began my walk around the town. I stayed by the mill pond for a while. There was no-one else there and it was so quiet I could hear the natural spring bubbling nearby. The pond is fed by water from an underground source in the Purbeck Hills that I could see on the horizon. The path alongside the water is lined by cottages built from Purbeck Stone from local quarries. The mill and the brewery once the main industries here are now residential properties close to the water. 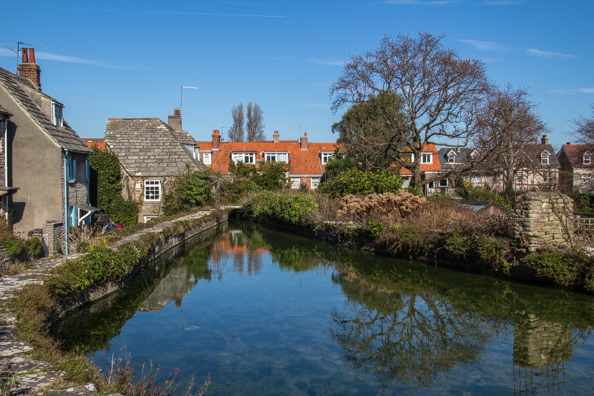 On the far side of the mill pond is the Church of Saint Mary, the ancient Parish Church of Swanage. This church has been re-built four times and the tower is the only original part remaining. This tower was originally built as a defence and it has tiny arrow slit windows. Initially there was no entrance at ground level. Before the stone steps were built access would have been up a ladder that was then pulled up into the tower. The top floor, that now houses a peal of eight bells was added to the tower in 1620. The church was badly damaged during World War II and extensive repairs were subsequently effected including the East window depicting Christ in Glory. Across the road from the church is a small stone building called the Rectory Classroom. It was formerly the coach house for the Old Rectory until the incumbent rector donated it to the parish in the 1870s. It is now used as a meeting place. 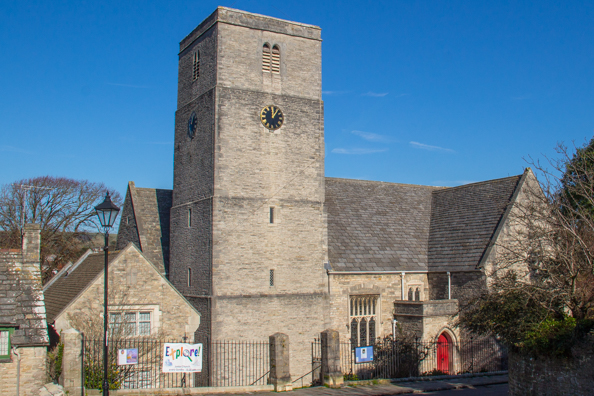 Walking down Church Hill towards the sea front I was distracted by the sounds of shunting and whistling. A steam train was about to set off for Corfe Castle, a popular trip for visitors here. This castle is an integral part of the history of Swanage. When Corfe Castle was destroyed in the English Civil War Swanage became the focus of the Purbeck Stone industry and the town developed as an industrial port. The railway came much later when the town was developing as a tourist centre thanks to the prosperity generated by the stone industry. In those days Swanage was a difficult place to get to and railway access would ease the situation. The firstl line was laid by the original Swanage Railway Company in 1885 but this branch line was actually operated by one of the national railway companies. It survived several threats of closure but was finally closed in 1972 and the track was lifted soon after. Around the same time a group of enthusiasts formed the Swanage Railway Society with the objective of rebuilding and reopening the line. Gradually the track was re-laid and sections of the line were re-opened. Since 1995 the Purbeck line has been operating a service between Swanage and Norden. In 2002 the final section of track was laid reconnecting the line to the national network. Seven years later the first through trains arrived in Swanage since 1972. 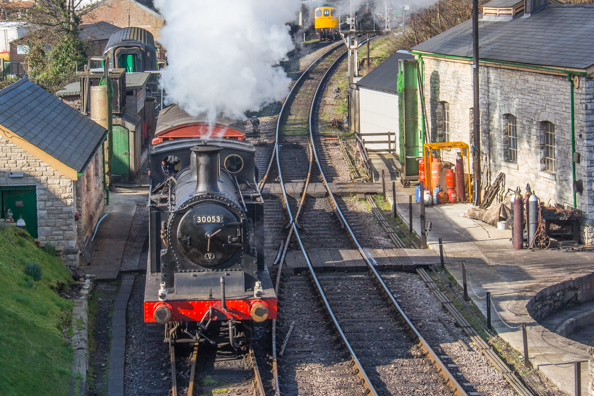 A short stroll through the beach park brought me to the sea front and the King Alfred Monument. This Grade II listed building commemorates a naval battle fought by Alfred the Great against the Danes in Swanage Bay. On top of the column are four cannon balls retrieved from the Crimean War. The monument was erected in 1862 by John Mowlem whose name in inscribed on the base. There is no doubt that John Mowlem had a great influence on the history of Swanage. He was one of two sons of Swanage who made their fortunes in Victorian London. The other was George Burt. John Mowlem was the son of a local store keeper. As a teenager he began working in a local Purbeck stone quarry but when it closed down he left Swanage and found work as a stone cutter. He finally found his way to London where, in 1822, he set up his own company and began transporting Purbeck Stone from Swanage to London by boat. In 1853 George Burt went into partnership with Mowlem and their company re-paved many famous London Streets. It was after he retired back to Swanage that he erected this monument. 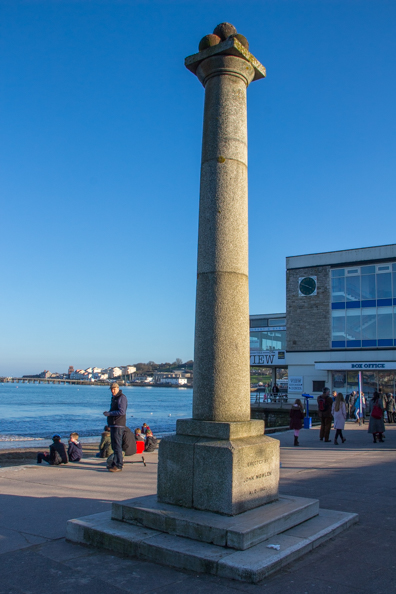 On my way to visit the Swanage Pier I noticed the old tracks used by horse-driven tram. Before these tracks were laid the Purbeck Stone would be piled up on the quayside and then laboriously manhandled into carts. Horses the pulled these carts were into the shallow water and the stone was off loaded into boats. The boats were rowed out to larger ketches and the stone was lifted on board. To improve efficiency, the Tramway and Pier was built in 1859 at the suggestion of a visiting railway engineer. The stone was taken down to the pier using the horse-drawn trams. The line survived until the 1930s latterly being used to carry fish from the pier to a fish store beside the tram lines. The timber stumps of the old pier remain, alongside the existing pier that was built in 1895. This pier was built for visiting paddle steamers as the town was transformed into holiday resort. The first effort to encourage holidaymakers to what was still a busy working port is the Stone Quay built by William Morton Pitt around 1825. Pitt was a local MP in the early nineteenth century. He converted a mansion in the town into a luxury hotel. This hotel is now known as the Royal Victoria Hotel (now a Grade II listed building) as it was visited by Princess Victoria in 1833 before she became queen. 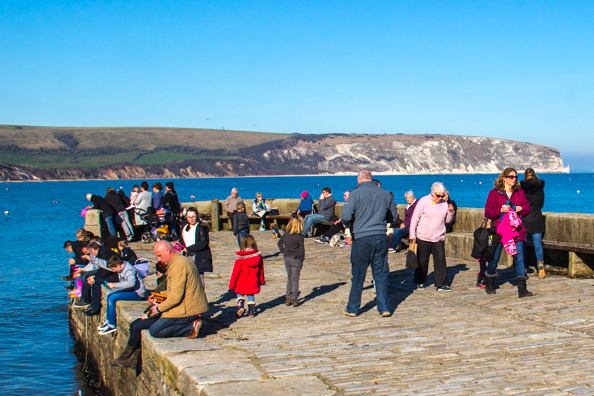 Visiting Swanage Pier is a great experience that starts with the little museum at the back of the shop near the entrance to the pier itself. It documents the history of some memorable events in the sea around Swanage. It also relates history of the Punch and Judy show, a regular feature on the beach during the summer. The pier itself is delightfully old-fashioned and beautifully preserved. It has been kept going by public donations and the efforts of the many volunteers who work there. From the end of the pier visitors get a clear view of the Jurassic Coast across the water. 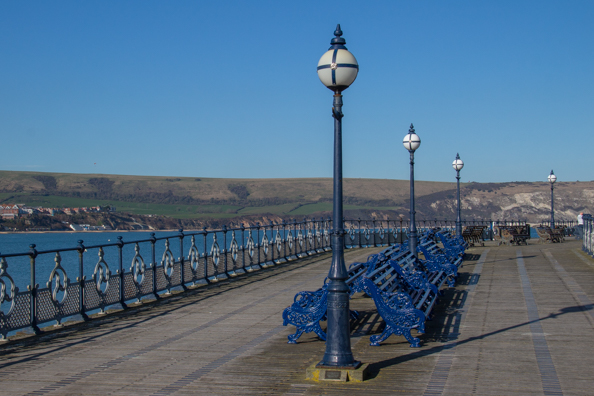 Beyond the pier are the Downs and, as it was a lovely sunny day, I decided to walk to the top of the cliffs. On my way I passed a bizarre sight – what looked like two Greek columns. They were being used as a goal by some young footballers. These are replicas of those in the Athens Polias temple built 2,400 years ago. The British Museum uses exactly the same design, although it is still a mystery which London building these fine Portland Stone columns once adorned. They were used as ballast in the boats returning to Swanage after delivering stone to London. There are several such relics from Old London adorning Swanage resulting in its nickname Little London. They include the façade of the Town Hall that was built by George Burt in 1882-3. 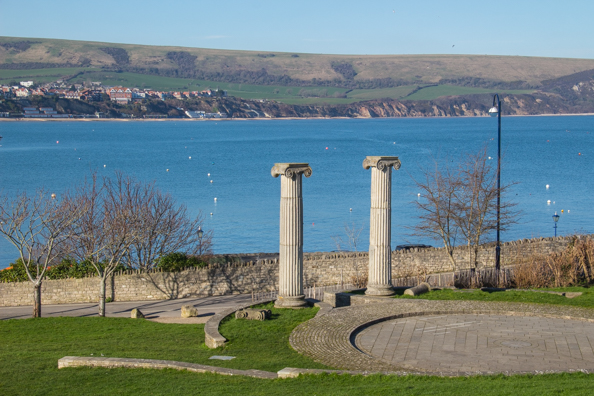 From the cliff top above Swanage I had superb views of the town below. By then I was getting hungry and it was time to return to the town to get something to eat. 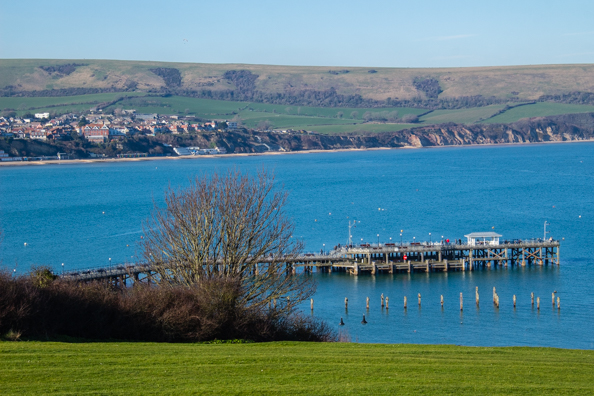 I was spoilt for choice when it came to finding a café. I finally settled for the Earthlights Café attracted by the interesting building it was housed in. This building, the Arcade, was built in 1896 as an architectural showpiece with no particular purpose. The architect, G. R. Crickmay, was heavily involved in the design and renovation of churches in the area which may account for the vaulted ceiling. Other features include the carvings outside and rain water pipe inside to maintain architectural integrity. Before becoming a café it’s uses included a photographic studio, a dairy, a coal and corn merchant, an antique shop, a bookshop and gift shop. Very little has changed since it was built and it has the perfect ambience for this friendly little café. 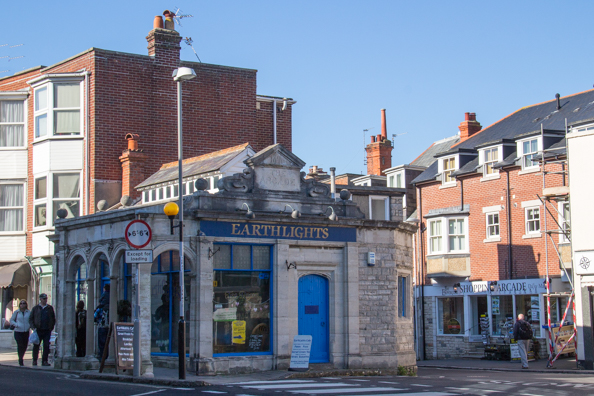 For me there was only one option – a delicious home-made Dorset cream tea. 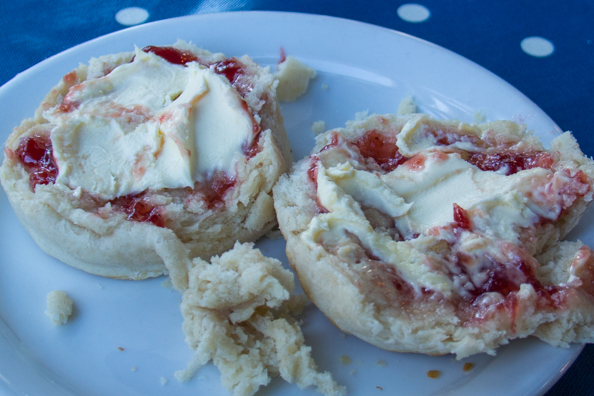