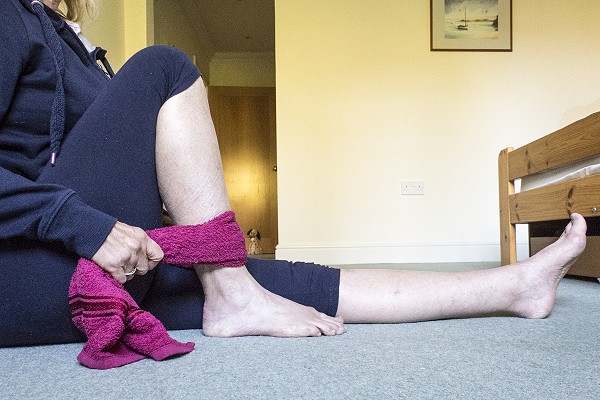 As soon as I woke up in the recovery room after my surgery to replace both knees I began doing some very simple exercises - flexing my thigh muscles. I kept doing this for the next twenty-four hours in between periods of morphine induced sleep (not my idea). I could not do anything else as I was tethered to my bed by various pieces of equipment.

The morning after surgery, as soon as I was free to move, I was able to do some more simple exercises and also forgo the dreaded bed pan for a proper toilet. My journeys to and from the bathroom were initially assisted by a walking frame. As a pair of crutches had already been delivered to my bedside I was soon experimenting with those and took my first walk along the corridor that afternoon. The next morning, I had my first visit to the hydrotherapy pool. Here I discovered the benefit of early, regular exercises as I was able to walk down the steps into the water unaided – only balancing on the railings. Striding up and down the pool supported by the water was pure bliss – I was pain free at last. Three days later, having mastered stairs on crutches I was on my way home ready to start my six-week plan. 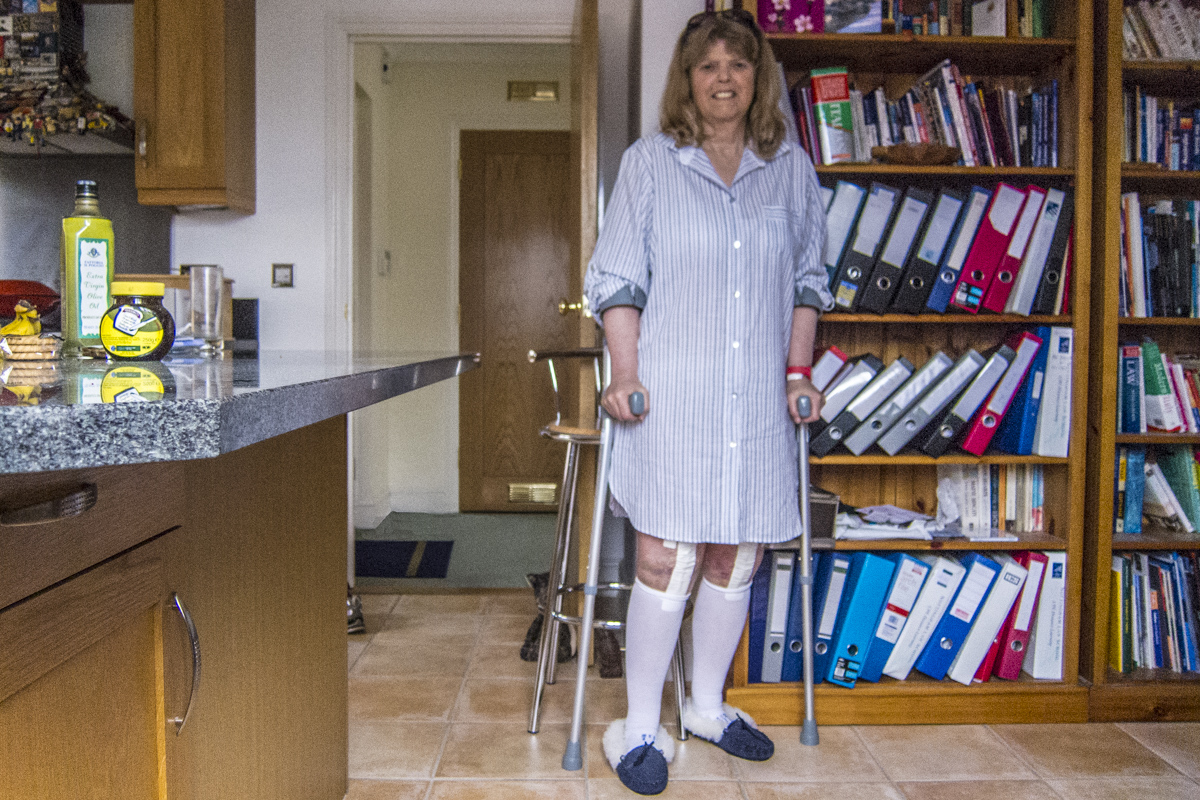 My six-week plan involved sleeping when I felt like it. Exercises three times daily following the instructions of my physiotherapist. And, on the advice of my surgeon, Professor John Skinner, two twenty-minute walks every day. This advice proved to be invaluable. I had set up a very simple gym in my kitchen centred around the breakfast bar. Initially I would clutch the breakfast bar to do simple bending and stretching exercises. When I moved on to exercises to strengthen my legs I would sit on the breakfast bar to do leg raises, my ankle encased in weighted bands. I also used my exercise bike every day. This had already been placed by a large comfy sofa - just in case I either fell off or fell asleep. I had bad memories of my first adventure with an exercise bike after the reconstruction of my right knee and had decided this time I would do my crying in the home. But this time I felt confident it would not be so painful. I had no plans to do anything other than concentrate on getting fit – my full-time occupation for the next six weeks. 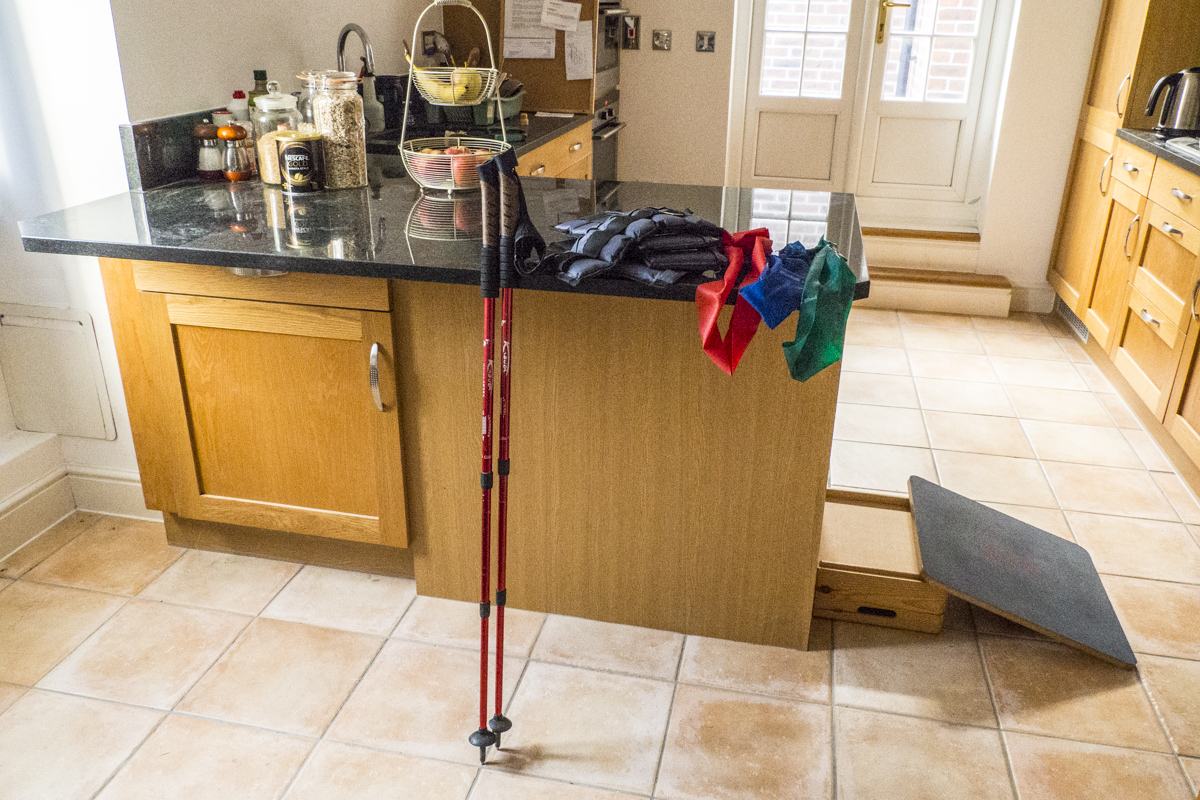 Regular exercise is vital for a quick and full recovery but equally important it must be done under the supervision of a physiotherapist. I left hospital with a set of very simple exercises supplied by the hospital physiotherapist. These were to be done three times daily and I made sure I did them three times every day. I was also very anxious to get going on my exercise bike and had taken to sitting on it occasionally when I had nothing better to do. I thought maybe a week after surgery might be considered too early. I decided to check with my surgeon first. While I was on the phone waiting to get through to his secretary I experimented to see if I could do a full revolution backwards. This is recommended as a first step as it is easier than going forwards. I managed a few backward revolutions and then tried going forward. That was almost as easy. By the time I got the answer – maybe it was too soon – I had already done a few revolutions. I added twenty minutes on the exercise bike (low resistance) to my daily routine. Every night I sat on the bed and, one knee at a time, I looped a towel around my ankle and pulled gently bending my knee as far as it would go. I held that position for one minute. It did hurt but it was worth it to improve the flexion in my knees. Once the staples had been removed I would massage each knee with Nivea cream which helped the scars to heal. 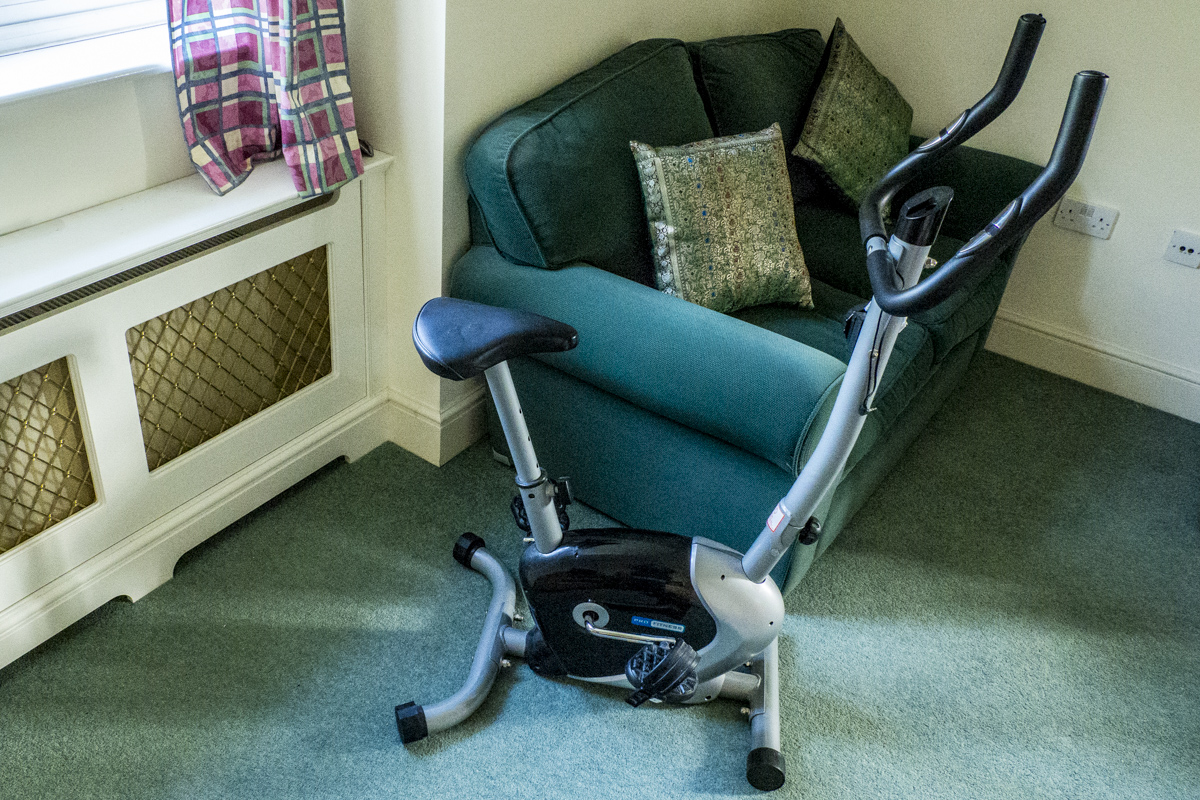 The day after I left hospital I did a twenty-minute walk in the morning and dragged myself out of bed in the afternoon to do a second walk. I felt good for having made the effort and slept better that night as well. It was difficult to get comfortable in bed those first few days so I would often get up and sit in the sitting room with my legs stretched out on a stool (heeding the warning about armchair knees from sitting too long). I found flexing my thigh muscles would ease the discomfort and rarely resorted to painkillers at night. My daily walks were soon extended to two walks of at least one hour. After two weeks I was confident enough to do small shops in the local supermarket. I would push my crutches around in the trolley and then pack my shopping in a rucksack and walk back home. As I got stronger I would start my walks carrying a crutch in either hand and then start using them when I was tired. When I had a review with "Professor John Skinner":https://www.rnoh.nhs.uk/health-professionals/consultants/professor-john-skinner seven weeks after surgery I was not using crutches to walk and he declared me fit to lead the walking holiday departing three weeks later (necessary for insurance purposes). By then I was confident driving and spending a lot of time in Dorset so I could do some ‘proper’ walking. Every day I would walk along the sea front between Sandbanks and Bournemouth ascending and descending the cliff paths. I also tackled part of the South West Coast path including the long stretch of beach on Studland. I had forgotten this is a naturist beach and it was amazing how many men of a certain age suddenly developed the urge to paddle as I strode along the firm sand at the water’s edge. Their desire to engage in conversation was distracting as it slowed me down and I did not know where to look. 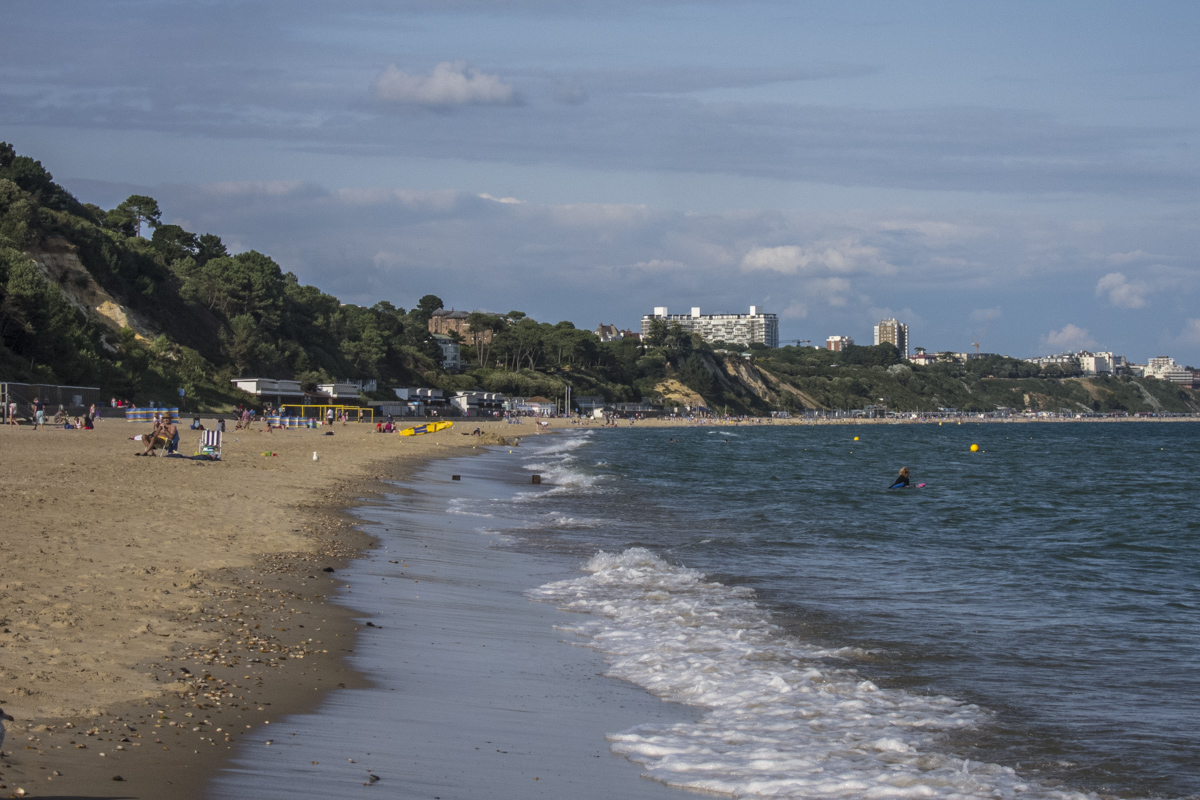 Naturally all my exercising was done under the supervision of my physiotherapist, Herbert Trabanino, the third member of the partnership to get me back to full fitness. I had worked with Herbert before following surgery on my shoulder so we had already developed a rapport. He was familiar with my life-style and able to adapt my rehabilitation accordingly. I had physiotherapy once a week for the first eight weeks following my surgery. An hour before each session I would take a painkiller to complement the anti-inflammatory I took every day. After a gentle first session I began working in the gym to build up my strength. I used to take the bus to the hospital which in itself was an adventure. Passengers doggedly refusing to give up the seat for the less able, bus drivers setting off before I had found a seat or stopping a long jump distance from the kerb. But it was all worthwhile and I was delighted when Herb pronounced me fit to go walking in the Italian Dolomites. At his suggested I had started using Nordic walking poles when I started taking longer walks. Hitherto I had never wanted to use any kind of walking poles but I heeded this advice and was very glad I did. Now I could overtake other walkers as I strode along the sea front instead of being the one who was always being overtaken. 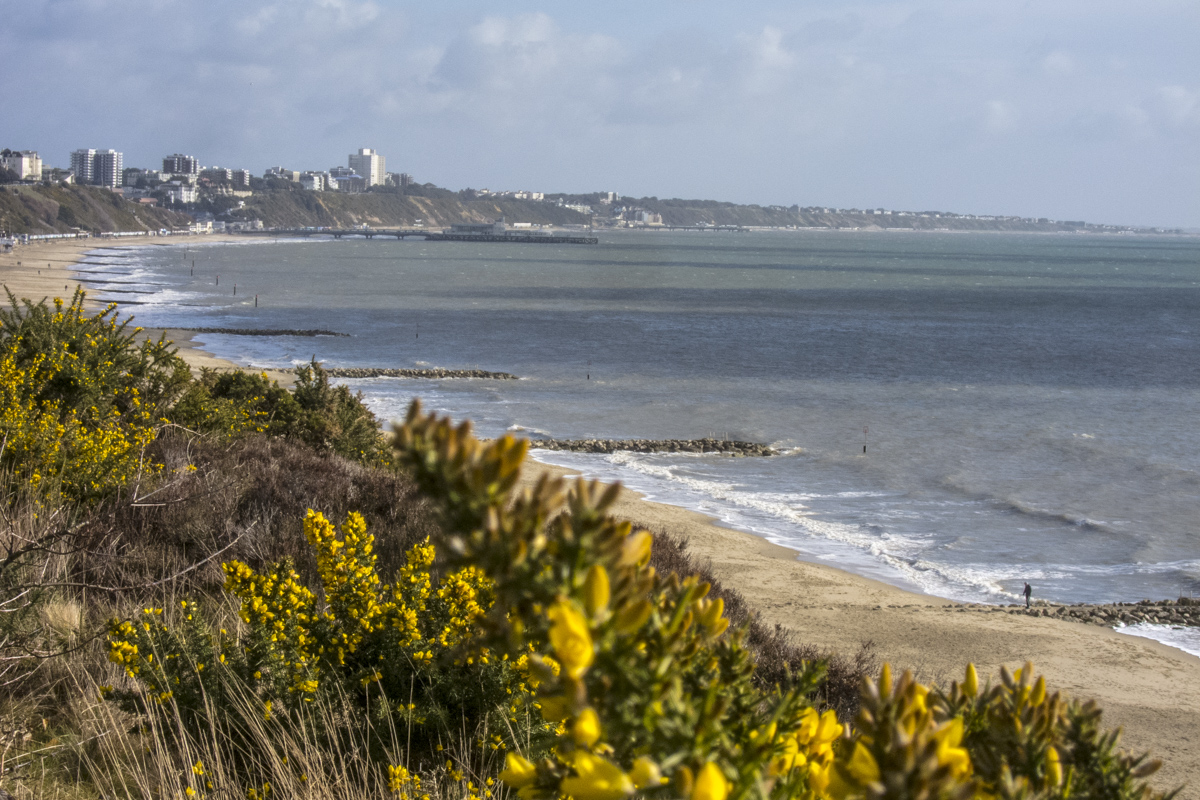 Ten weeks after having both knees replaced I felt ready to take on two walking weeks in the Italian Dolomites. Was this confidence misplaced? Read how I got on in the next chapter of my story.