I have been walking in the Italian resort, Madonna di Campiglio for more than twenty summers. For me, walking is the best way to enjoy the spectacular Brenta Dolomites that encircle this little resort in the Trentino region. I also enjoy skiing there and my walks are often a combination of a marked path and part of a piste. They all feature coffee and lunch stops.

The Giro di Campiglio, a circular path around the outskirts of the town.is a unique characteristic of Madonna di Campiglio. Over the years this walk has become one of my favourite walks. As it is easily accessible from several places along its route and to walk to and from the town it is nicer to walk a section of this path than walking on the pavements. It is also linked to a variety of other walks that stretch beyond the town. All the walks here are marked with red and white splashes but the Giro is distinguished by green and white splashes. The Giro is also a walk in its own right pasting through woods and across the ski runs that descend into the town. From these lofty paths the walker has great views of the town below. 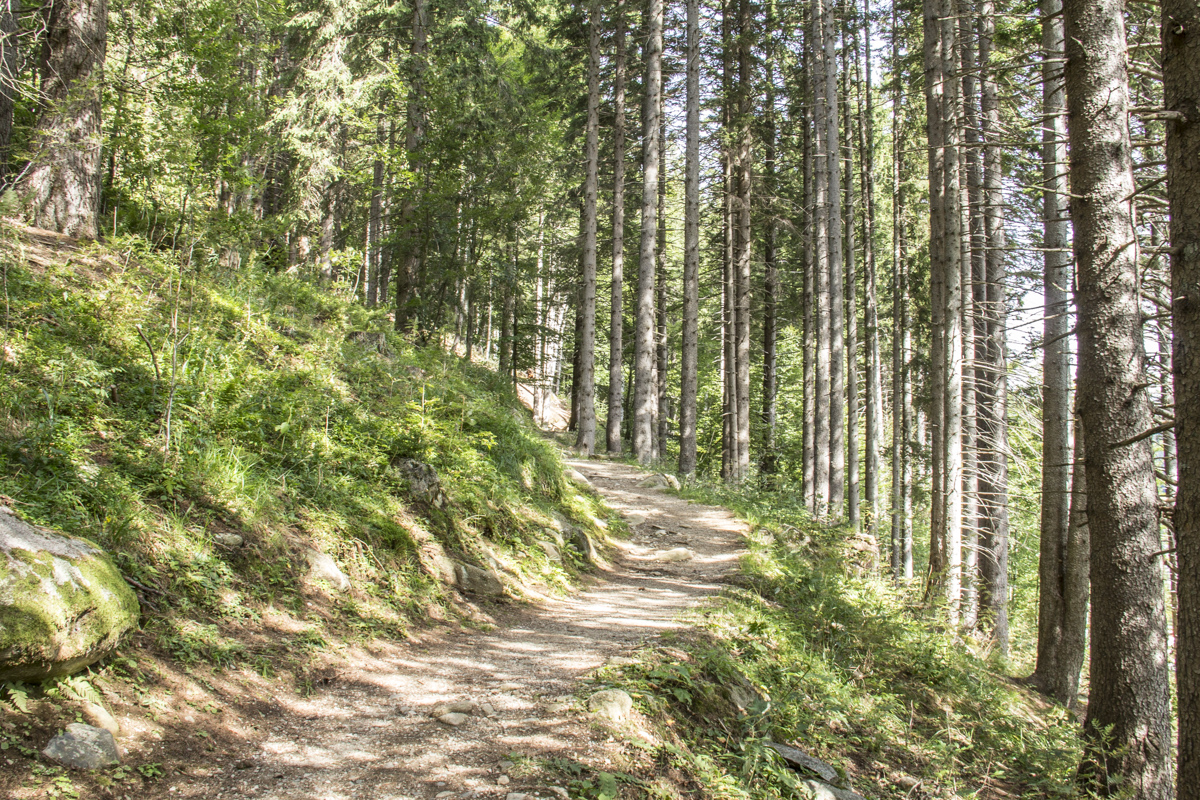 I start this walk from “Grosté”: https://www.funiviecampiglio.it/en cabin lift. Behind the cabin lift a short distance up the grassy slope that is a ski run a path enters the woods to the left. This narrow, winding woodland path emerges from the woods and crosses a gravel road twice before coming out into a clearing below a malga (a summer farm). Herds of cows are brought up here in the summer to graze in the Alpine meadows and the people who look after the cows are based in a malga. There are several of these summer farms on the slopes around Madonna di Campiglio and some of them make and sell cheese. After crossing the grassy area below the malga the path descends through the woods to another malga, Malga Mondifrà . This malga is also a restaurant but they will serve coffee mid-morning. 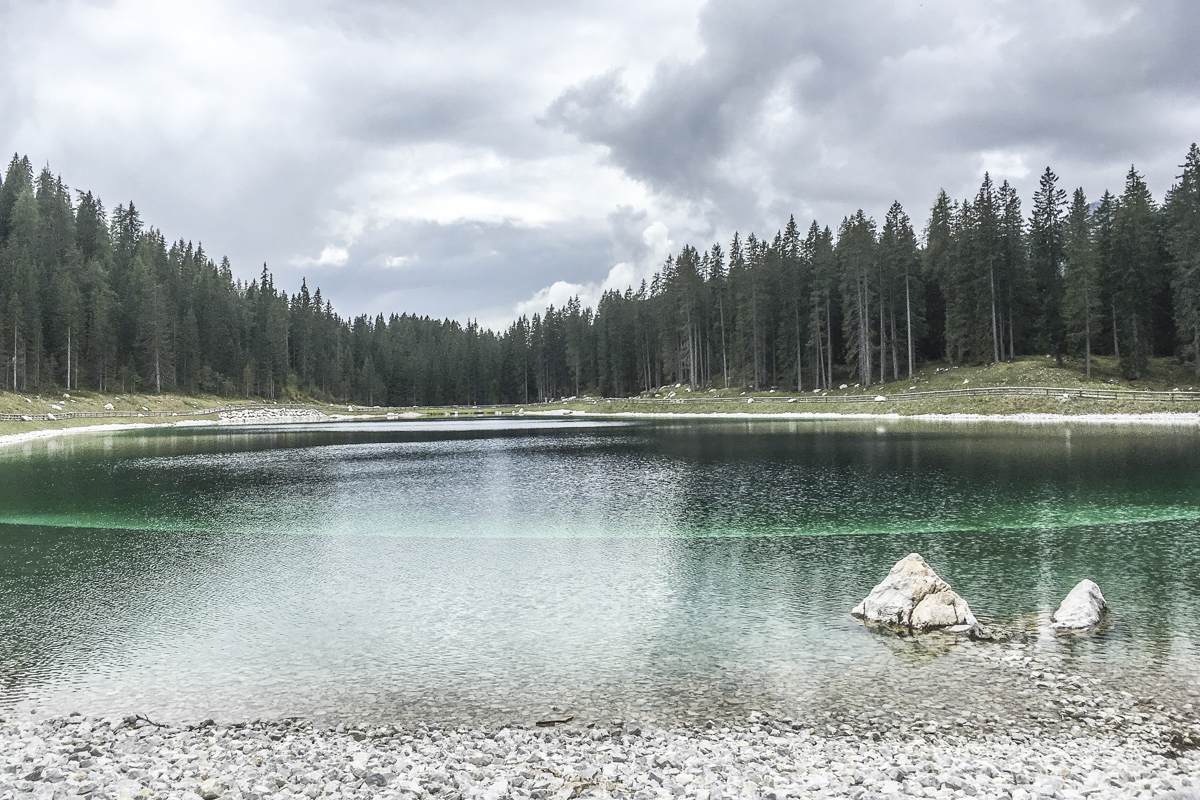 After leaving Mondifrà I follow the road back towards the town and shortly after passing an old limestone burning kiln I turn left off the road onto a path, signposted Malga Vagliana, through the woods. This path joins a ski run and after crossing this grassy slope I make my way up the right-hand side of the run. My route passes a reservoir, Lago Montagnoli, before reaching “Malga Montagnoli”: http://www.ristorantemontagnoli.it/# where I stop for lunch. Its restaurant has tables outside and serves tasty, traditional food. After eating I turn back towards the lake and take a path on the left of the grassy slope signposted Lago Montagnoli. This path joins another path going towards Piazza Imperatrice – reputedly the place Sissii , wife of the Emperor Franz Josef, often visited when she stayed here. A short distance past this piazza, on the left side of the road is a path that zig-zags through the woods down to a road. Over the road is a narrow path that emerges by the little church and I am back in the town. 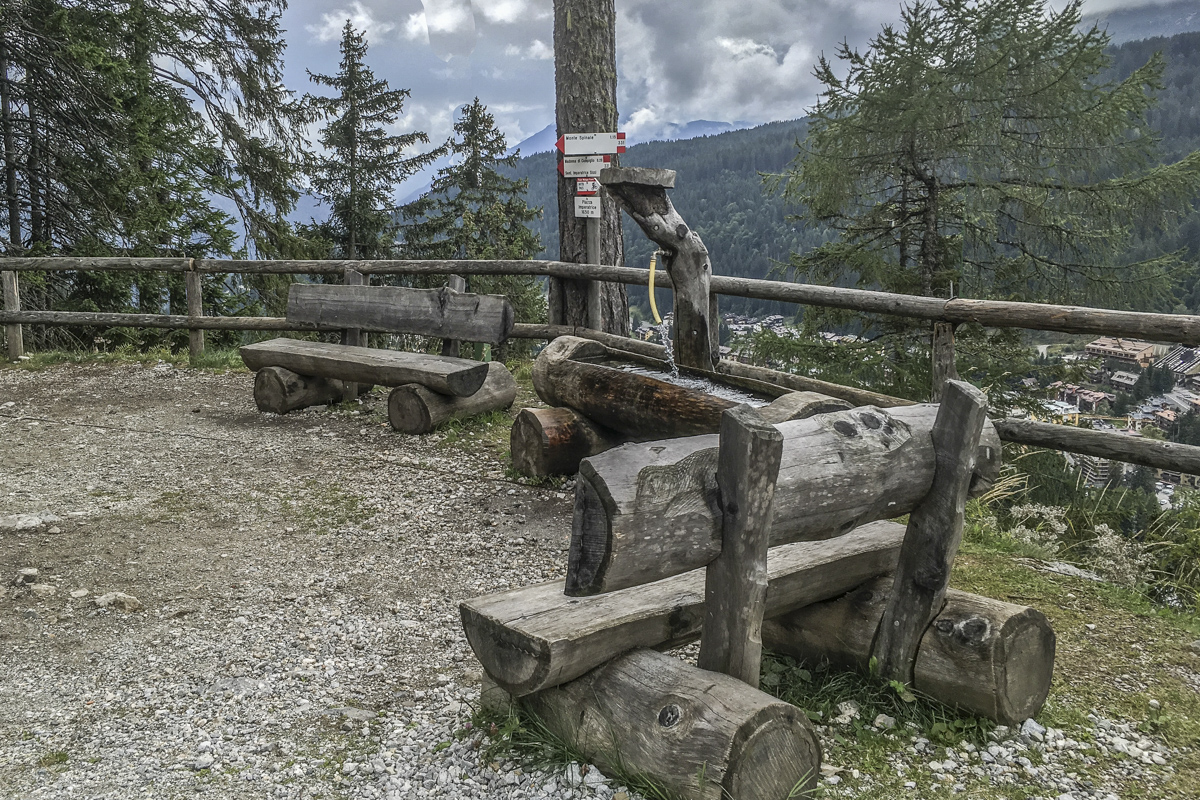 The Waterfalls of Vallesinella

I join the Giro di Campiglio outside the Hotel Lorenzetti where I stay when I am in Madonna di Campiglio. This starting point is named Pramagnam on the map of the Giro. I follow it down through the woods, across the road and back into the woods again. This section of the Giro descends into the valley and crosses the River Sarca. After the bridge there is a junction and I keep going straight on leaving the Giro here and taking a short path that joins the Giro di Vallesinella After following this path for about thirty minutes I can hear the water tumbling down the Cascata di Mezzo which I reach a few minutes later. If the weather is nice I sometimes scramble over the rocks to take a walk under the waterfall itself before having a coffee in the Rifugio Cascata di Mezzo. 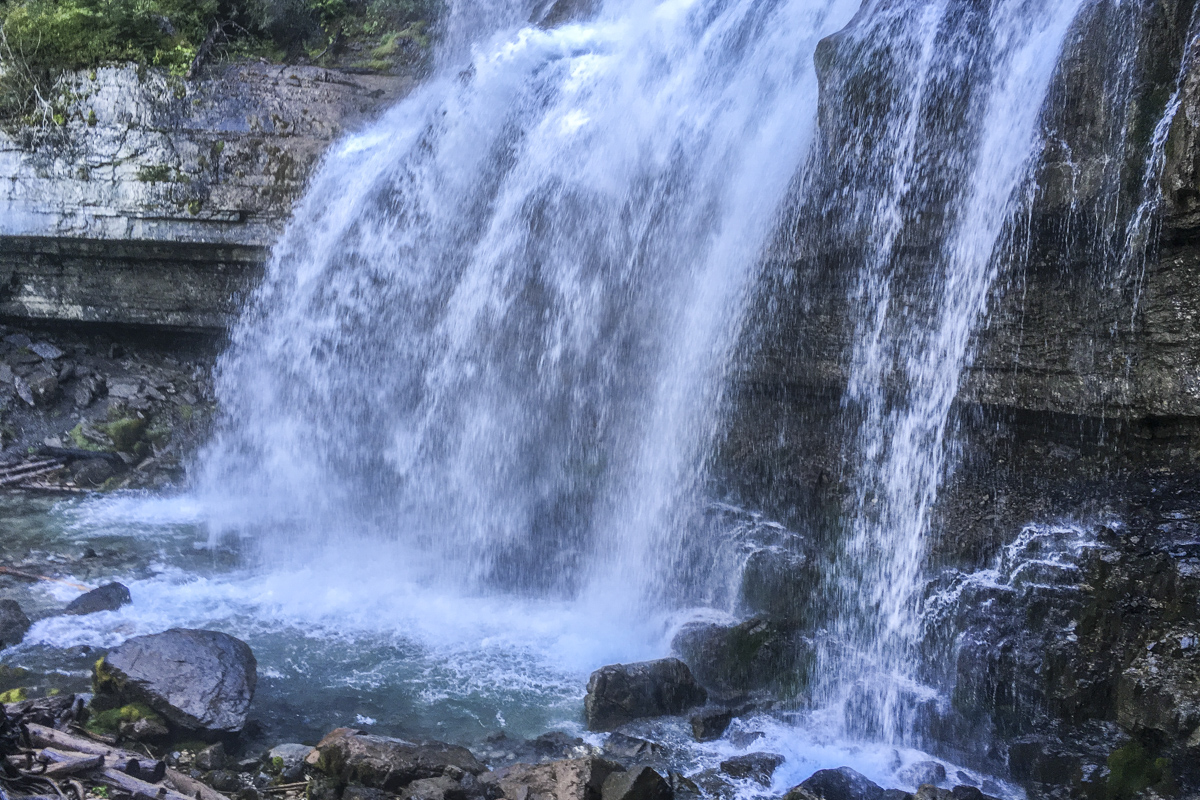 After my coffee break I re-join the path which takes me up the side of the waterfall and the joins a track that emerge on the road below a large car park. After crossing the car park, I pick up the path again towards Cascate Alte. This path leads to the bottom of the Cascate Alte where the water crashes down from a great height. I follow the path that winds up the side of this waterfall and emerge in a large Alpine meadow. After skirting a small section of this meadow I take path 382 down to the Rifugio Vallesinella for lunch. After lunch I re-join path 382 that goes behind the rifugio back towards the town. Initially this lovely path rises up through the woods occasionally emerging in an opening in the trees with great views of the Brenta Dolomites across the valley. This path emerges on the road and joins the Giro di Campiglio which takes me back to my starting point. 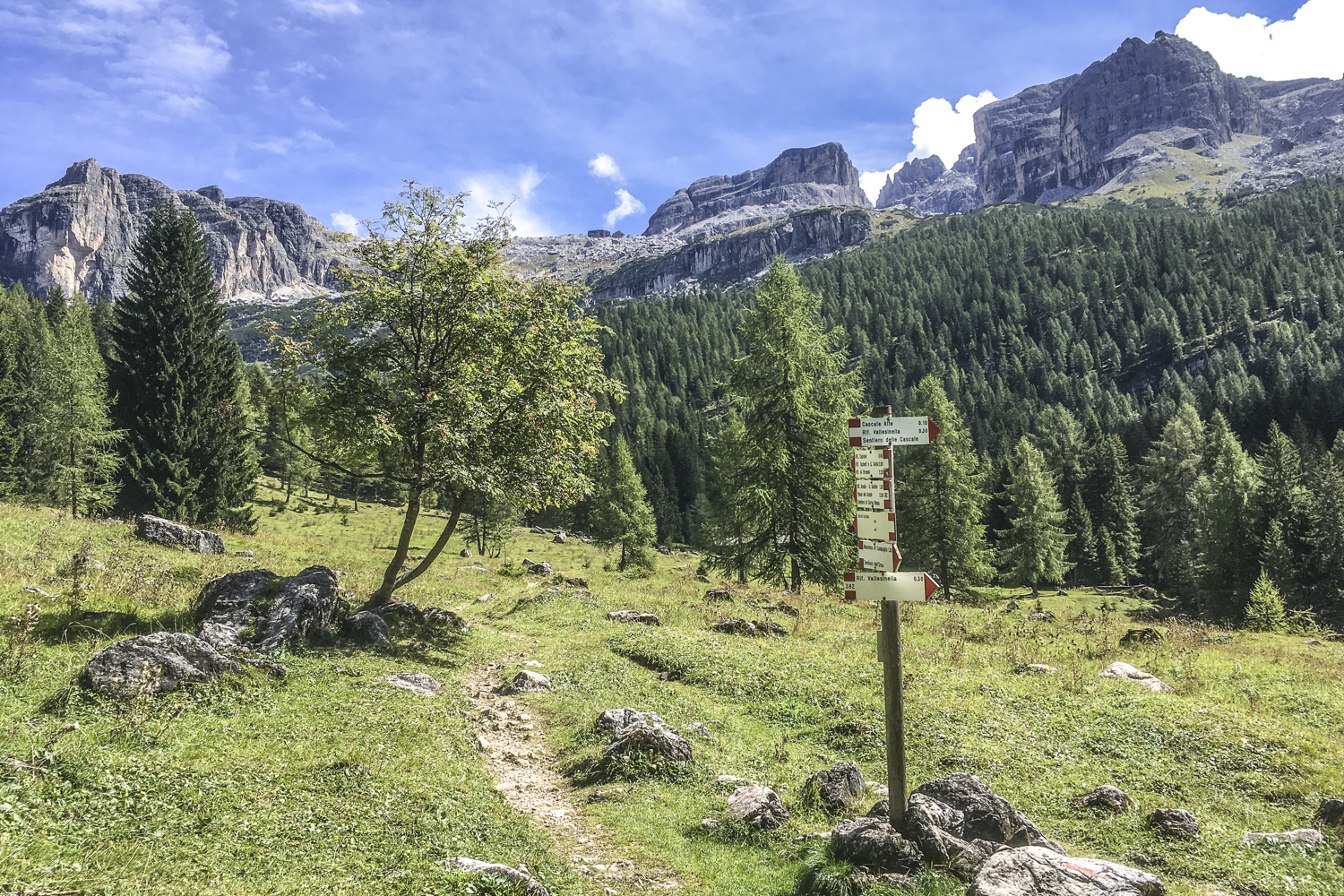 My starting point for my walk to Lago Nambino is a path that goes round the back of the Hotel Ambiez. I use the shuttle bus of the Hotel Lorenzetti to get there. Another, more strenuous starting point is the bottom of the ski run opposite the Grosté Cabin lift. This path joins the ski run but only for a short distance before turning left into the woods. It is signposted Lago Nambino all the way to the lake itself. It is an easy path that crosses a steep black run with views of the town below. On arriving at Lake Nambino I may do a circuit of the lake before having a coffee. The views of the lake in front of the peaks of the Brenta Dolomites are impressive. After pausing for a coffee at Rifugio Lago Nambino I walk past the shingle beach at the edge of the lake, over the bridge and bear right into the woods. This path is signposted and emerges in the area known as Patascoss. Just below the road it joins is a restaurant, Rifugio Patascoss, the ideal place for lunch. It has a large terrace with tables outside where they offer restaurant service and very good food. After lunch I take a short cut across the meadow to join the road that passes the restaurant and heads for Malga Ritorto, another restaurant. This road ends here and I take the track that passes through the farm beside it. At the junction I turn left onto a path signposted Madonna di Campiglio and follow this path until it joins the Giro. At this junction I turn right and keep going on the Giro until I emerge on the road at Panorama where my walk ends. 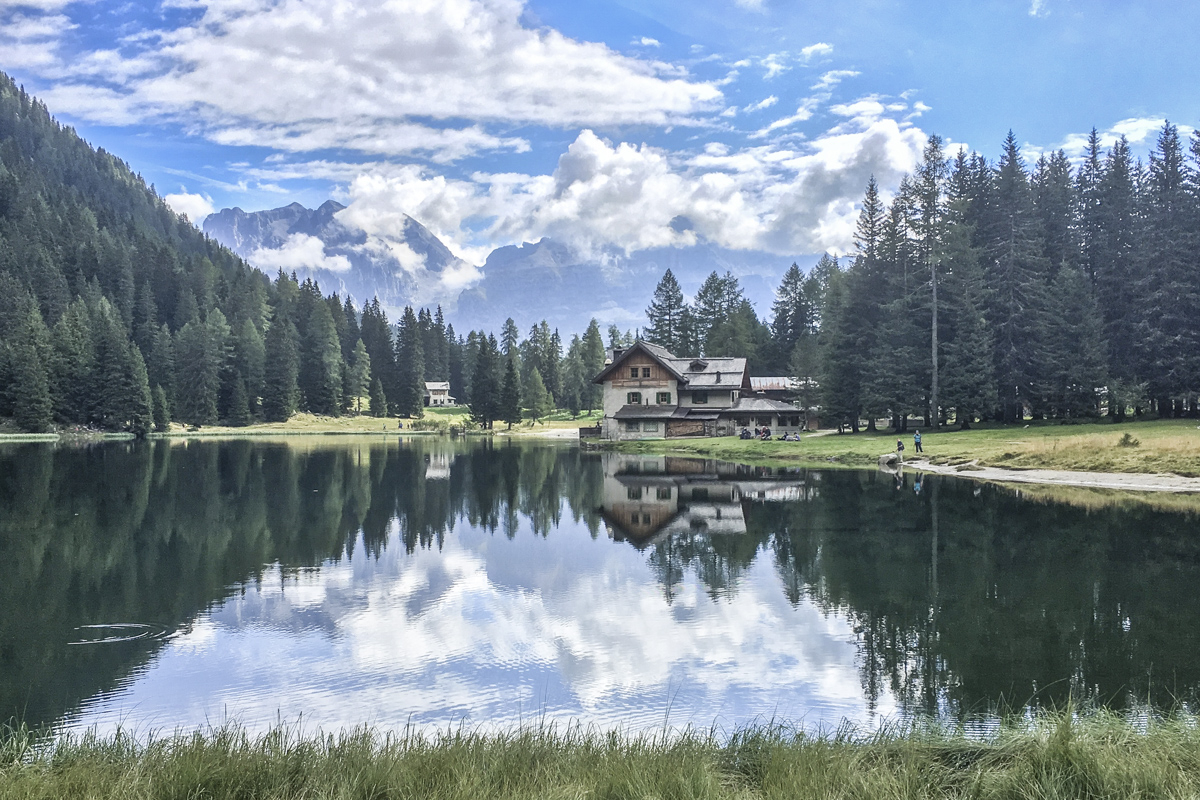 Generally I begin my walk to Lago Malghette from the top of the Pradalago cabin lift where I can enjoy the views of the town and linger over a coffee at Ristorante Viviani. If I want a more strenuous start I take the path … from the Cascina Zeledria . This way I follow footpaths through the woods and sections of ski runs that ascend steadily to Ristorante Viviani. Behind the restaurant I pick up the path signposted Lago Malghette and follow that path all the way to the lake. This rocky path is relatively flat until it descends to the lake and emerges by the restaurant on the lake. Before eating I usually do a circuit of the lake for the fabulous views from the far end. A glorious combination of lake and mountains. Back at the restaurant I stop for lunch and generally indulge in the traditional pasta dish known as pizzocheri – a whole wheat pasta with cabbage, potato and cheese. It tastes a lot better than in sounds. After lunch I take the path that passes the little chapel and descends all the way to Campo Carlo Magno, a small settlement above Madonna di Campiglio. This path comes out on the main road and I usually finish my walk here. Alternatively, I can walk straight down the hill towards the town picking up a path behind the “Grosté”: https://www.funiviecampiglio.it/en cabin lift the Giro di Campiglio that goes down into the town. 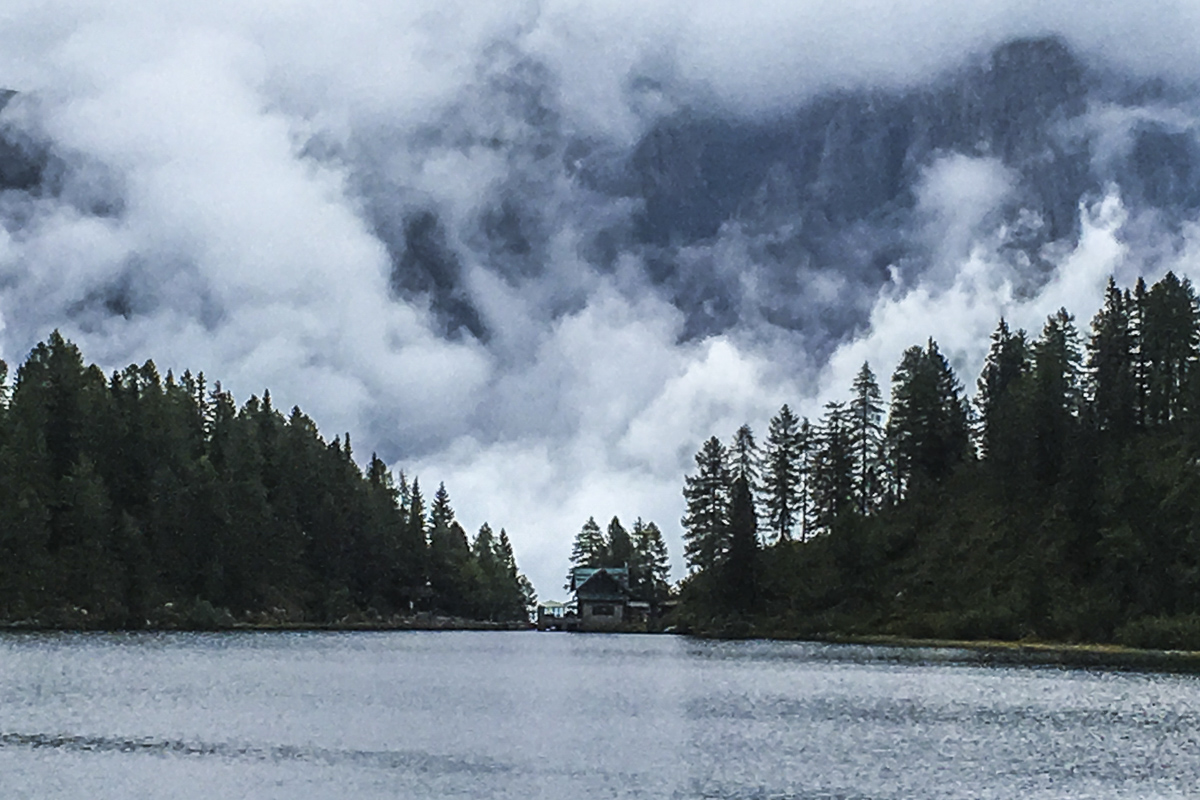 There are many more walks around Madonna di Campiglio all clearly marked on the paths themselves and the map of walks that is available from the Tourist Information in the centre of the town.