Latgale and a Journey of Discoveries - Day 1

Setting forth to explore the Latvian region of Latgale I was sure of one thing, there would be some surprises. This is always true in a country as unusual as Latvia.

While exploring Latgale I was based in Daugavpils, the biggest city in the region and the second largest in Latvia. Daugavpils lies on a bend of the Daugava River. This river flows through the Daugavas Loki nature park. The Vasergelišķu tower is one of the best places to enjoy the landscape that surrounds the river.

From the top of the Vasergelišķu viewing tower, I could see the Daugava River meandering across the flat land below me. The natural course of this river is believed to be one of the oldest geological landscapes in the Daugava Valley. I could just make out a man fishing on the bank and a small boat floating on the water as I scanned the beautiful scenery below me. My next stop was Slutišķi Village. 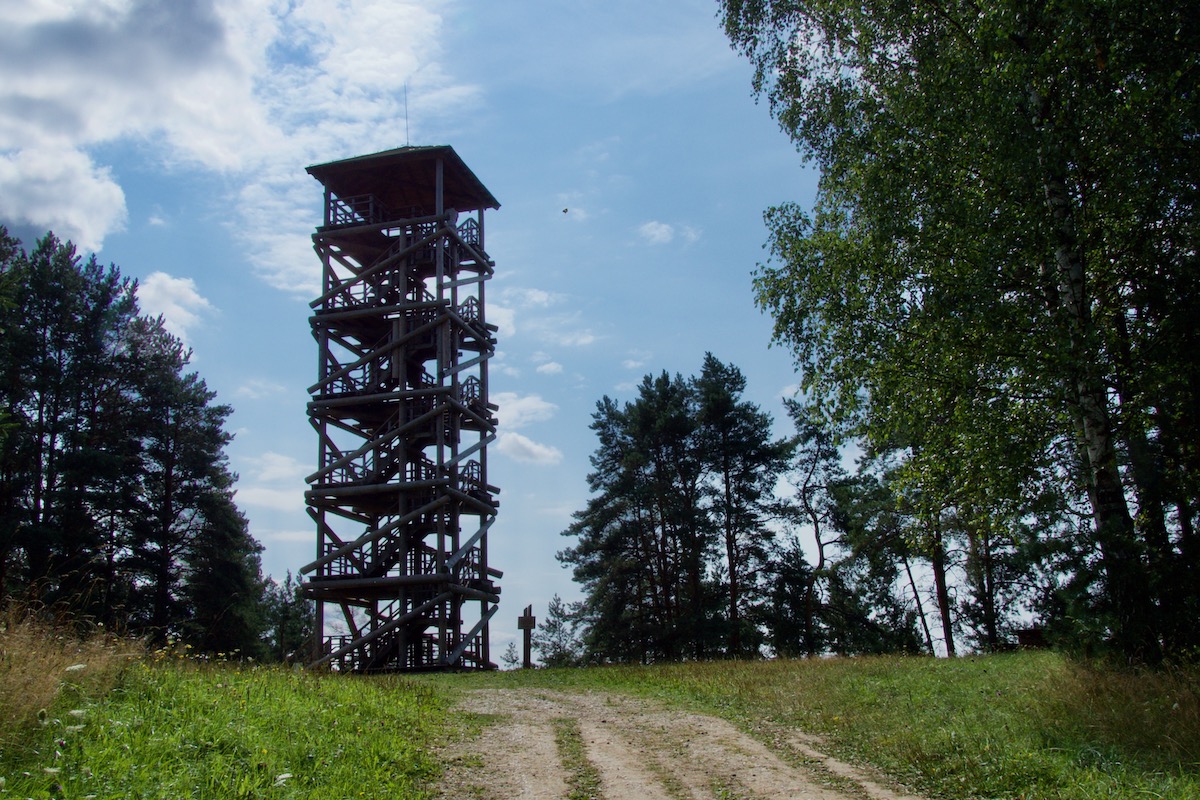 The Old Believers continue to follow the old form of Russian Orthodoxy. A form that existed prior to the reformation of the religion by Patriarch Nikon in 1653. He banned the old rites in Russia and persecuted the Old Believers. Many of them fled to neighbouring countries including Latvia and, in particular, the region of Latgale. The first Old Believers’ church in Daugavpils is one of the biggest in the country. Slutišķi village is a genuine Old Believers’ village but very few houses remain there today as the area was once designated as a site for a Soviet hydro-electric power station. The houses here are typical horizontal log rectangles covered with two- or four-gabled roofs. One of these houses has been converted into a museum 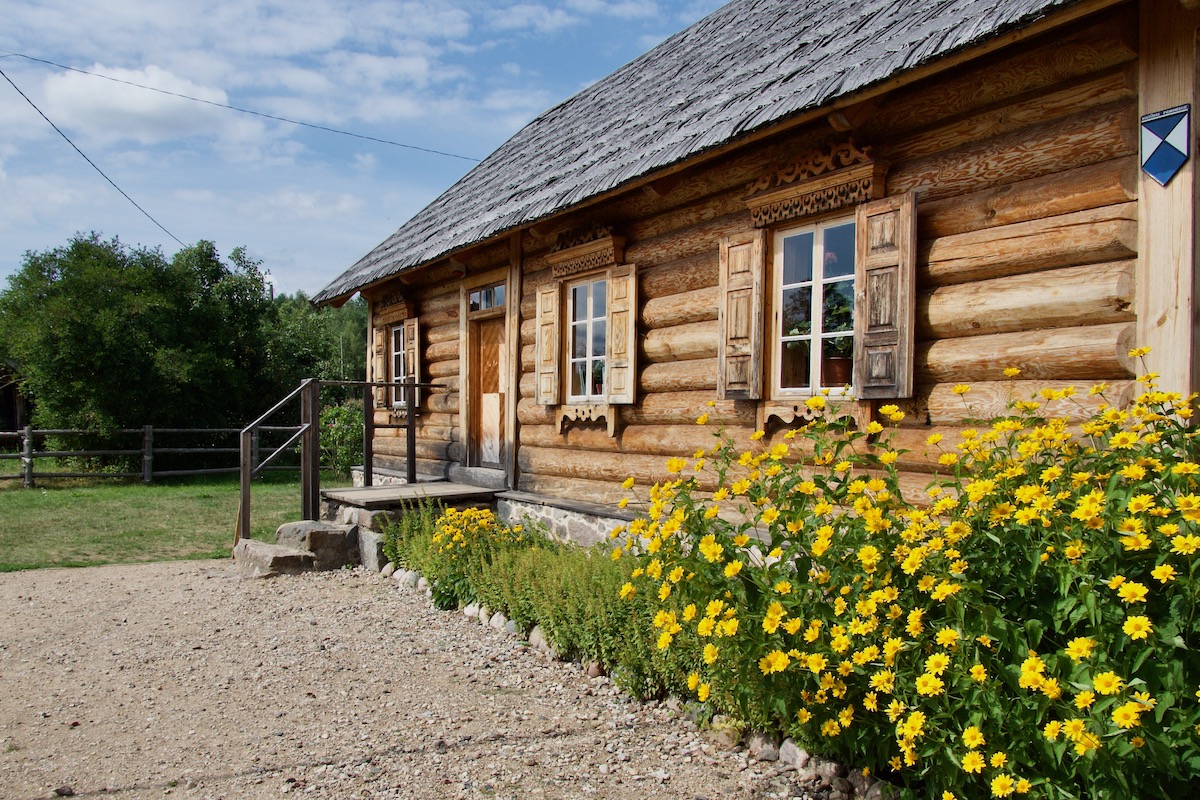 Inside each house decorated window frames, doors and cornices are unique and reflect the individuality of the carpenters who created them. The interior of the Old Believers’ House is a unique example of the spiritual and household culture of this religion. Exhibits include a beautiful icon, a black prayer cloak and a white rosary although black is the more traditional colour. Its rural courtyard features a display of the horse harnesses and tools from the Daugavpils region. My next stop also featured harnesses, the Klajumi Ranch. 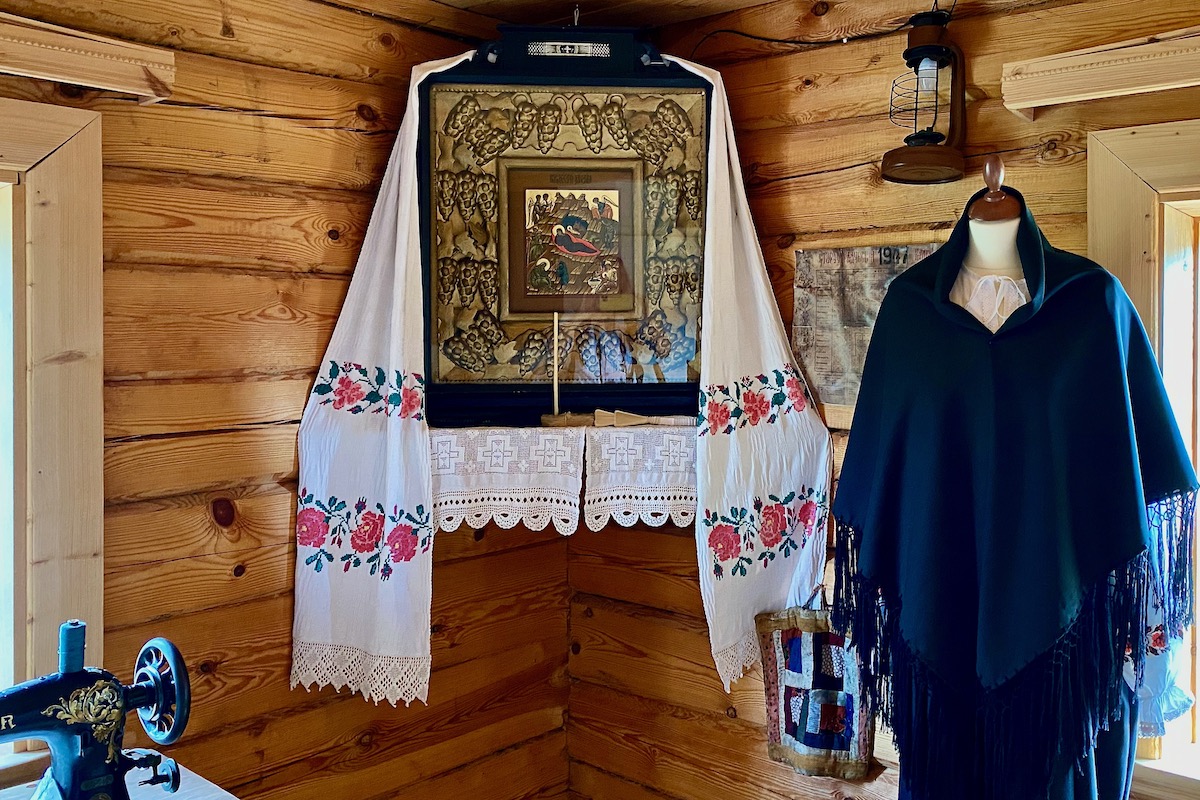 Klajumi has a long tradition as a family-run ranch. It offers accommodation and is a delightful setting for a special event. Set amongst undulating hills it is the perfect place to go riding or to enjoy a traditional Latgalian lunch on the large balcony of the main building. This award-winning establishment has received the Green Certificate symbolizing eco-friendly farming, the promotion of culture and historical heritage, the use and preservation of natural resources. I had lunch here. My meal started with a bowl of the traditional sorrel soup. The ingredients of this soup vary according to the recipe of the house. But it is always very tasty. It was accompanied by the best rye bread I tasted throughout my trip. The main course consisted of a plate piled high with grilled pork and grilled vegetables that was passed around the table. It was a very friendly affair. It was followed by a stroll around the outbuildings including the accommodation and the stables before moving on to Kraslava Castle. 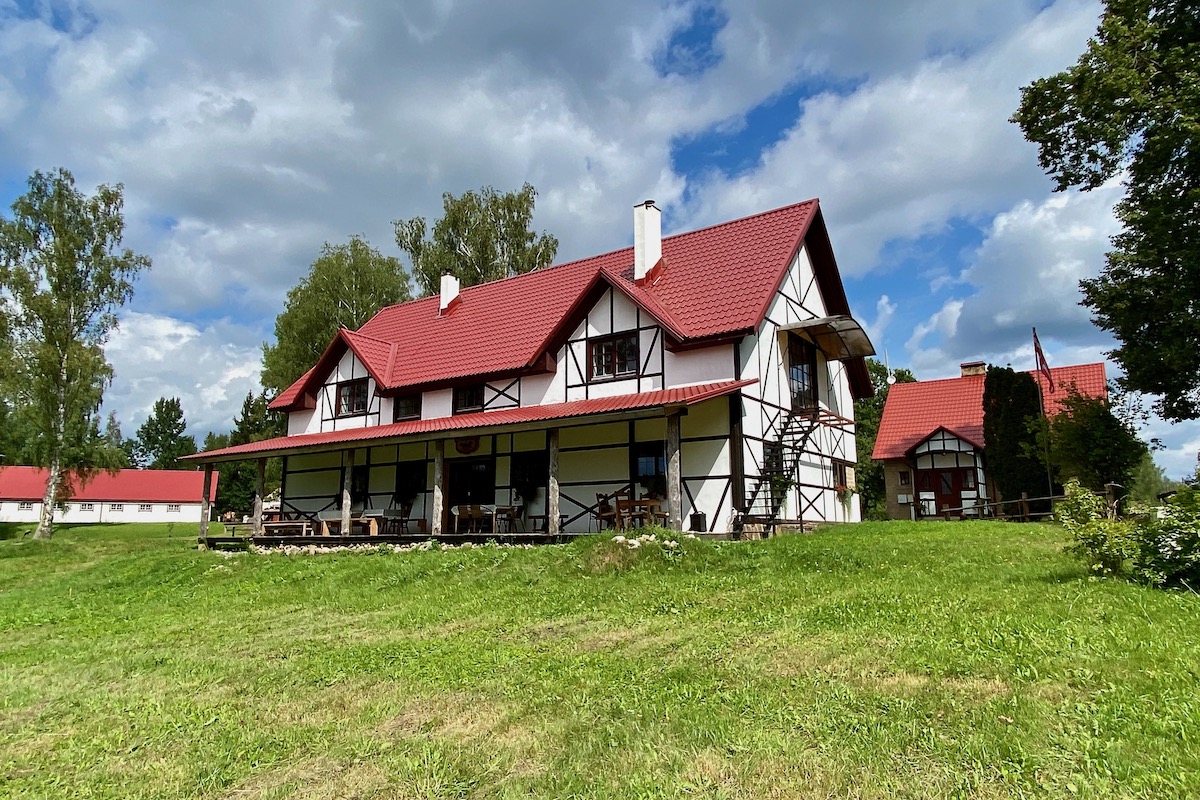 Kraslava Castle, set in extensive grounds was the home of Counts Platers. The castle itself looks more like a large mansion and it is flanked by buildings housing a museum the Olga Gribule porcelain doll collection. I started with the collection of dolls on the floor above the gift shop near the main entrance. This private collection features almost 1500 dolls from around the world and include some made by world-famous artists. The display is beautifully laid out and it was fun identifying some famous personalities in the line-up. As I left the collection I was joined by a very jolly guide waiting to take me on a tour of the complex. 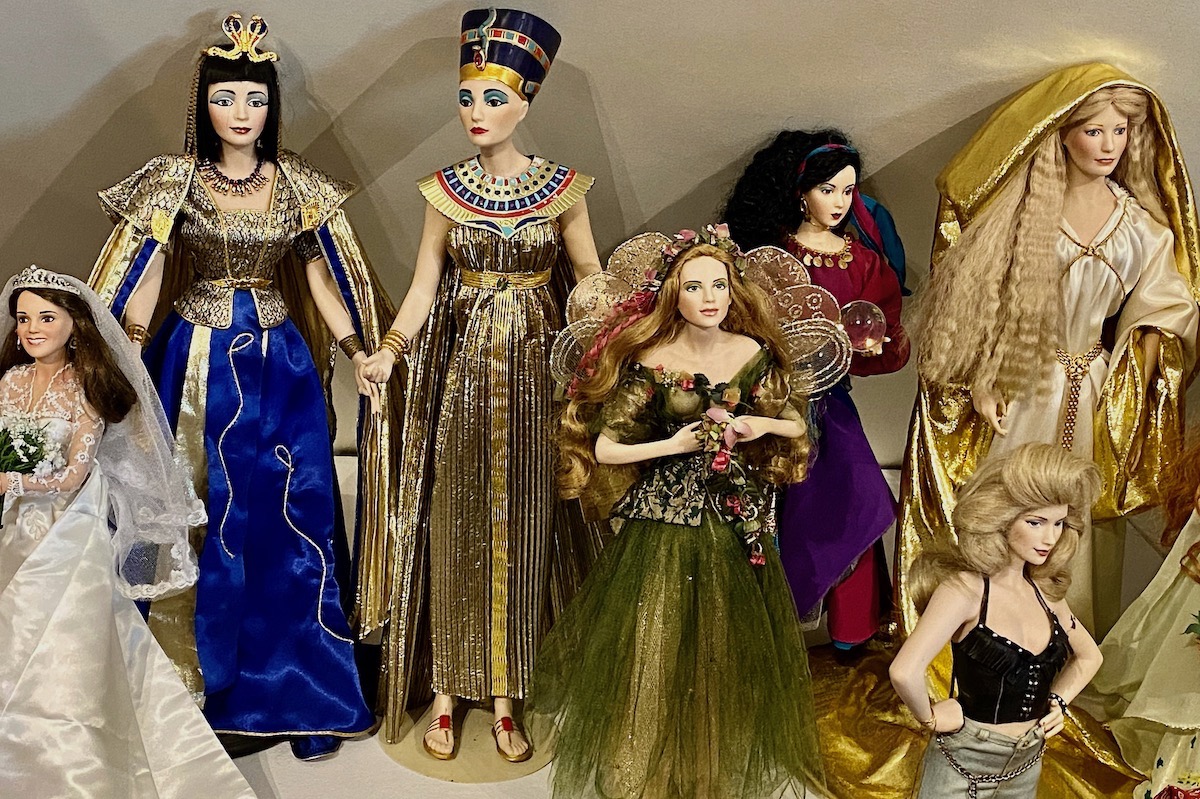 We started with some history. The original castle was built by the Counts Platers between 1750 and 1791. It was rebuilt at the beginning of the nineteenth century in the Classic style of architecture. The Platers left the castle during the First World War. It was then occupied by a school until the 1970s. Since then it has been left empty and its condition deteriorated. The exterior has recently been renovated and it looks magnificent. But plans to renovate and restore the interior of the building are currently on hold. My guide had a key to the castle so I was able to enter and take a limited tour of the dilapidated rooms inside. Of particular interest are the unique Rococo wall paintings with views of Rome. 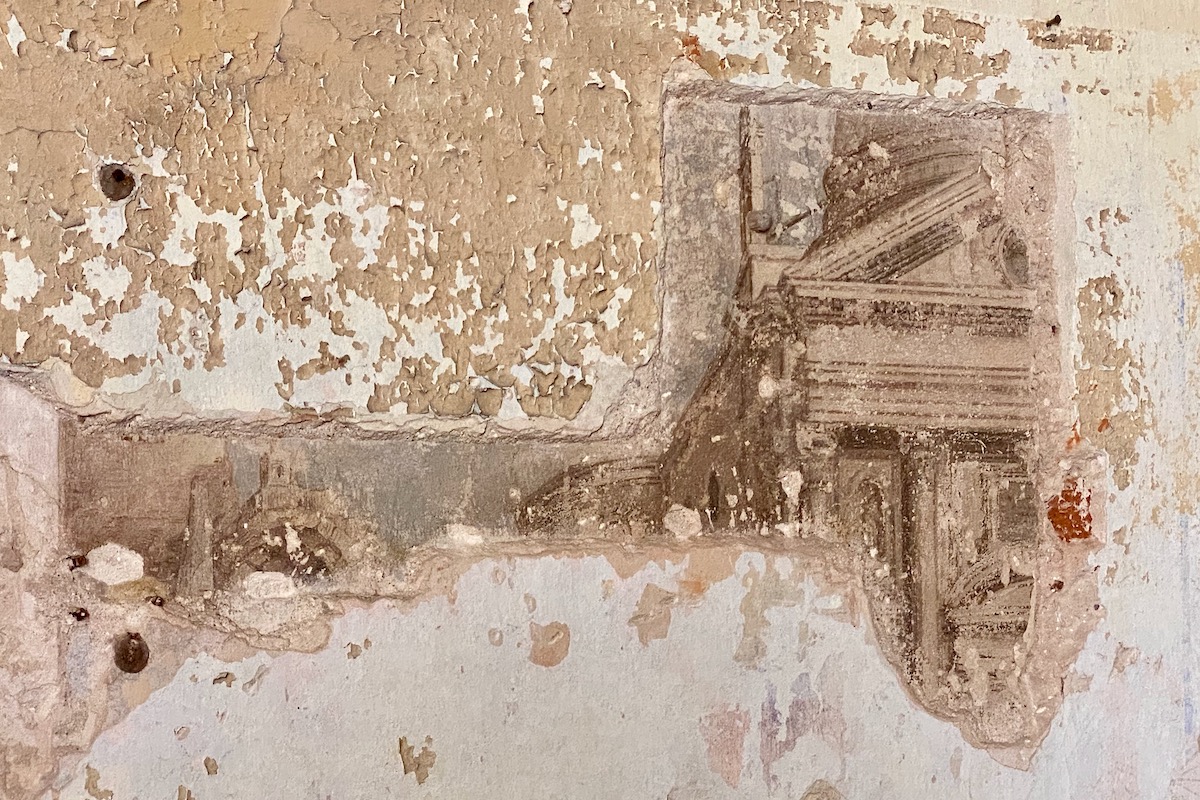 With a flourish of a huge bunch of keys, my animated guide opened the Krāslava Museum of History and Art. This lovely museum occupies one of the eighteenth century buildings in the castle complex. Artefacts displayed in the main room of this museum are laid out as though onboard a boat. It is very clever and something I have never seen before. After the museum, I was taken to the rural style Lielborne Manor tucked away down a rough track. 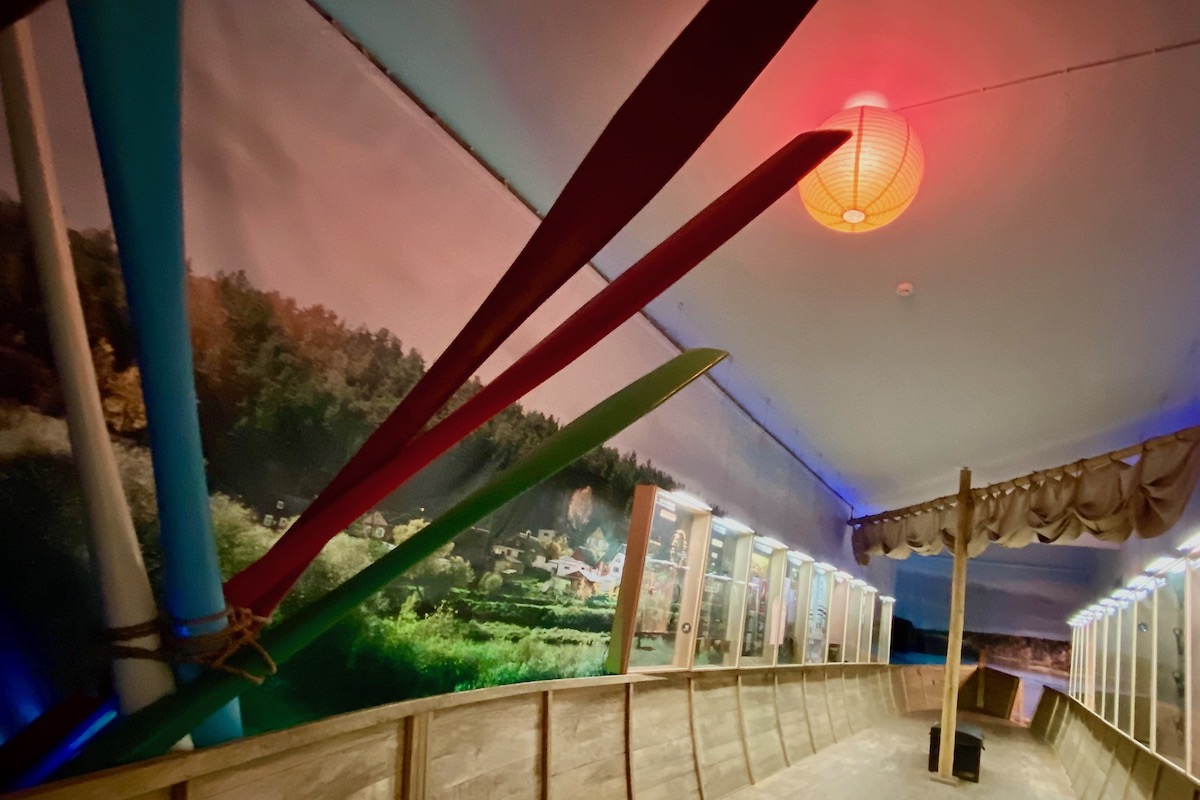 Lielborne Manor is in a very secluded spot with extensive grounds including the ruins of an old mill and a millpond. It is the only preserved manor complex in the Daugavas loki nature park. The old manor is thought to date back to the eighteenth century. The current owners are working hard to restore the garden and park to their former glory. As well as offering holiday accommodation the house is also used as a language school where individuals can come to study a language on a one to one basis. After a stroll around the park, I dined here. The meal was lovely in particular the honey cake dessert made to their own recipe and using local honey. It was the perfect end to a fascinating day exploring Latgale. And there was more to come the next day. 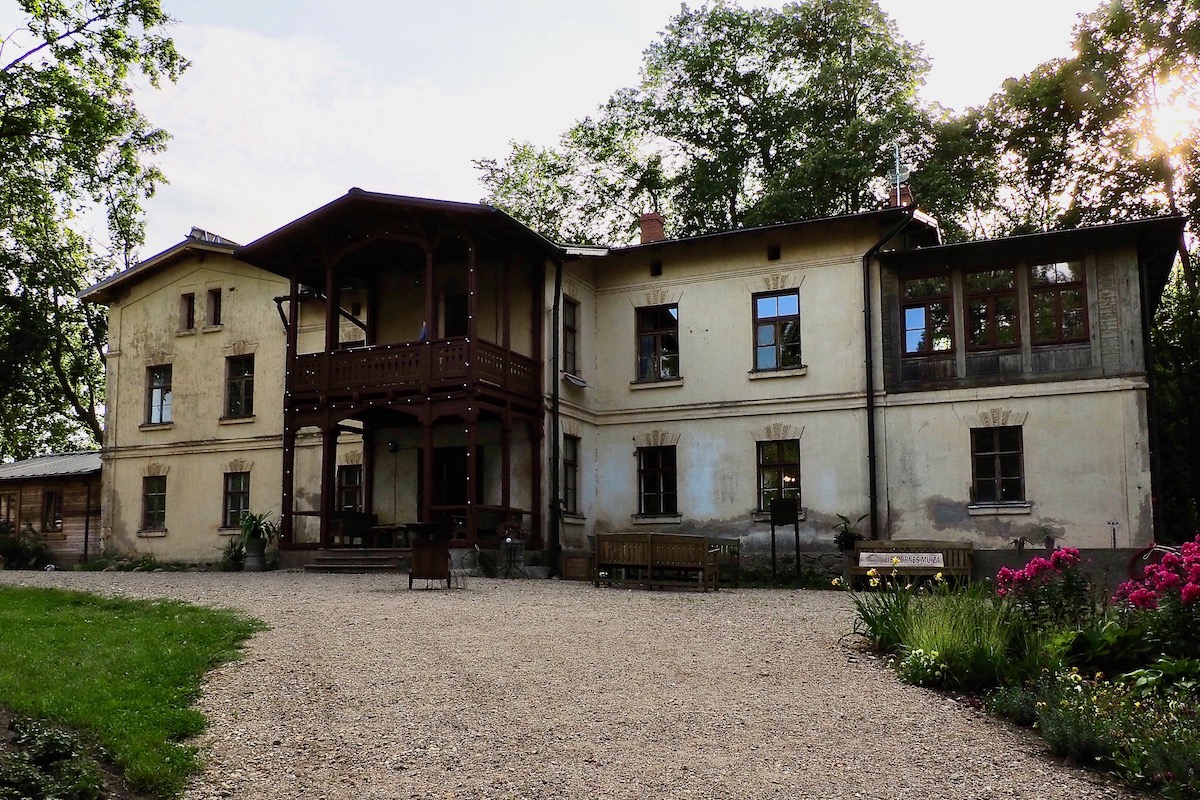