Daugavpils in Latvia – a River, a Fortress, a Lily

On a recent visit to Latgale in northern Latvia I arrived with no idea what to expect. What I found was a wealth of culture, history, and traditions. Especially in the regional capital, Daugavpils.

Daugavpils, the second largest city in Latvia. It is the main town in the region of Latgale. The town has a coat of arms featuring a river, a fortress and a lily. These three symbols represent important aspects of this remarkable city. It was built on a bend in the River Daugava, it is protected by a fort and it is famous for its religious tolerance. There has been a settlement here since the Middle Ages when German crusaders conquered Latvia for the first time. Since then the town has been occupied by Russia, Germany and the Soviet Union. This heritage is apparent in some of its most important buildings and museums.

The Historic Centre of Daugavpils in Latvia

I began my tour of the town at St Peter’s in Chains Roman Catholic Church. The original church was built in 1849 but it was rebuilt between 1924 and 1934. This colonnaded church is a small scale replica of St Peter’s Basilica in Rome. It is surrounded by lovely gardens featuring an interesting collection of sculptures. Beyond the church is Dubrovin Park. This park is named for an ex-mayor of the town, Pavel Dubrovin, who was responsible for its creation. He can still be seen walking his dog through the park, close to an impressive fountain. 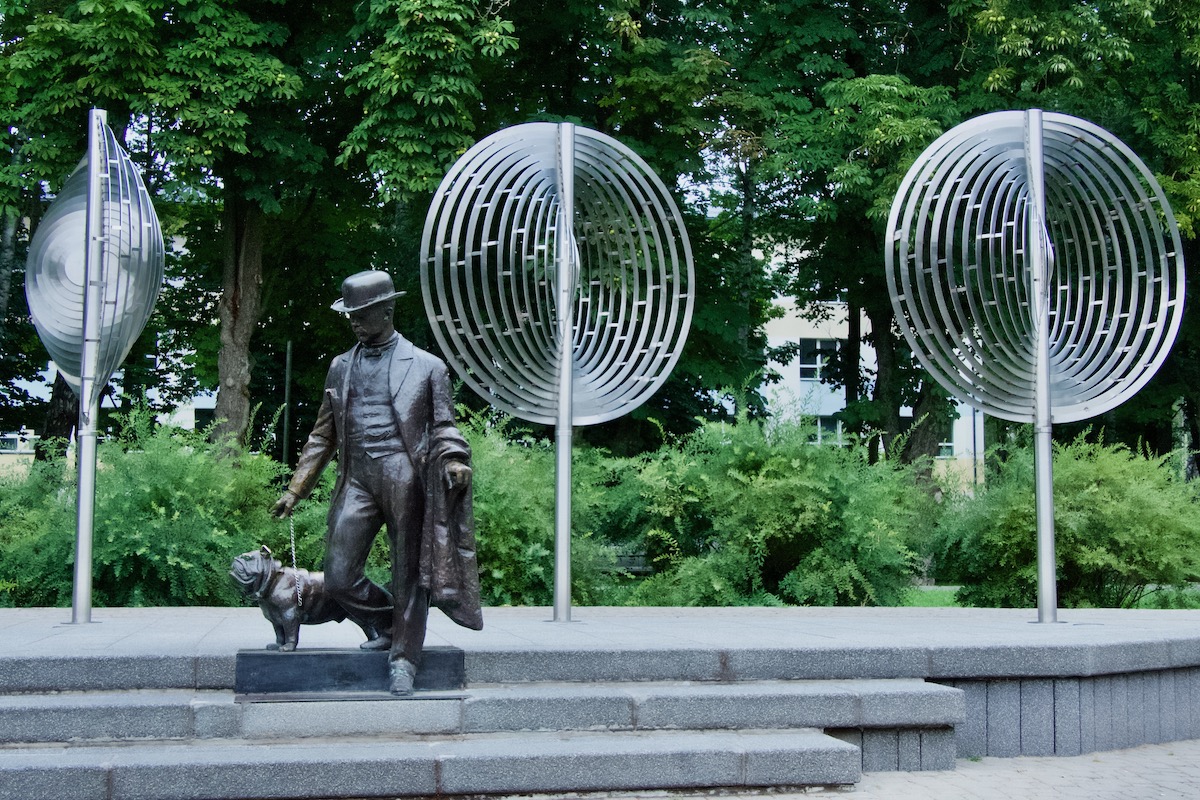 Continuing along the pedestrianised Rigas iela I came to a pedestrianised area decorated with formal flower beds that is part of the Andrejs Pumpurs Public Garden. This garden was created during the second half of the nineteenth century and features a bust of the poet Andrejs Pumpurs. The garden is also home to the pretty St. Alexander Nevsky Russian Orthodox Chapel. Close to this church is the fountain Girl with a Lily. An eternal flame flickers in front of the striking monument to the innocent victims of the Communist regime. Overlooking this area is the huge Unity House. This multifunctional building was built in 1937 and included a theatre, a concert hall and a library. When it was completed it was the most modern multifunctional building in Europe. It is still used as an entertainment centre today. 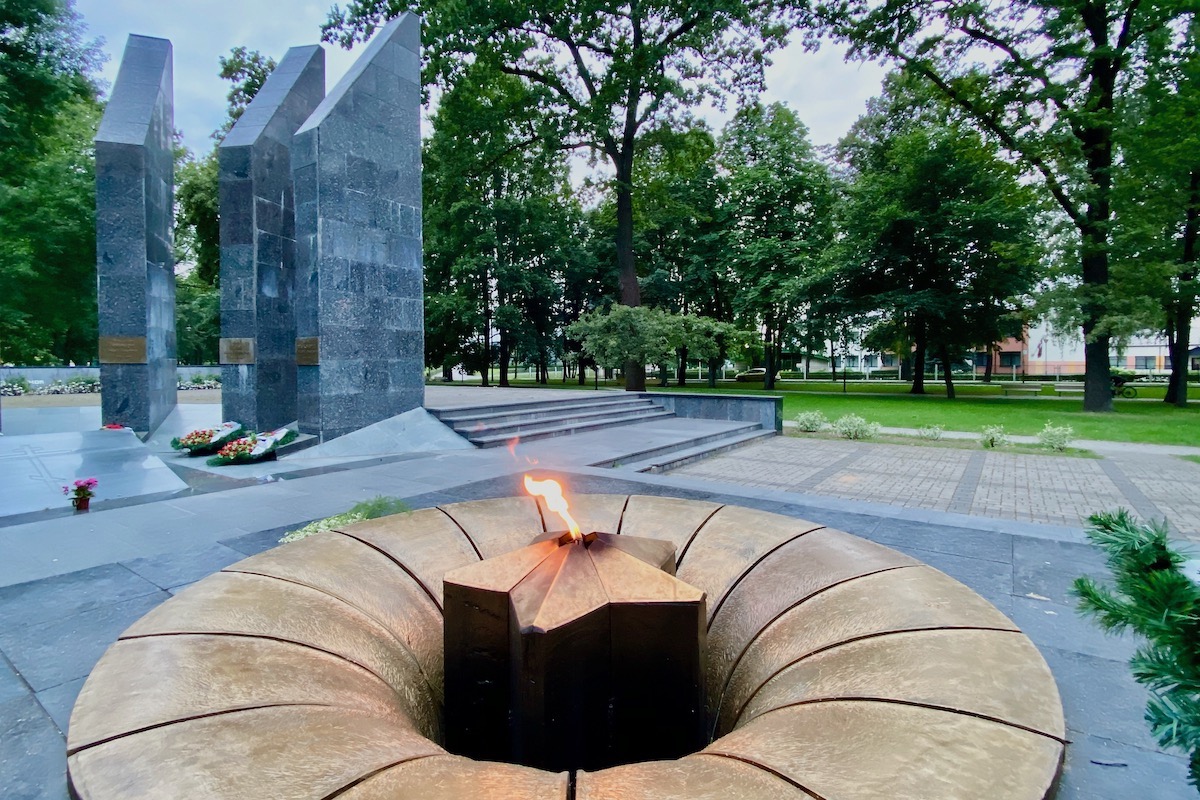 The Šmakovka Museum in Daugavpils, Latvia

The latest technologies are used in the Šmakovka Museum in the centre of Daugavpils to tell the story of Latgale’s favourite alcoholic drink. Well-presented artefacts with accompanying soundtracks tell the story of the drink’s creation linked to the history of Latgale. Šmakovka can be distilled or fermented and flavoured with just about anything from horse radish to honey. After learning the history of this drink we tasted three different flavours. Both were interesting experiences. 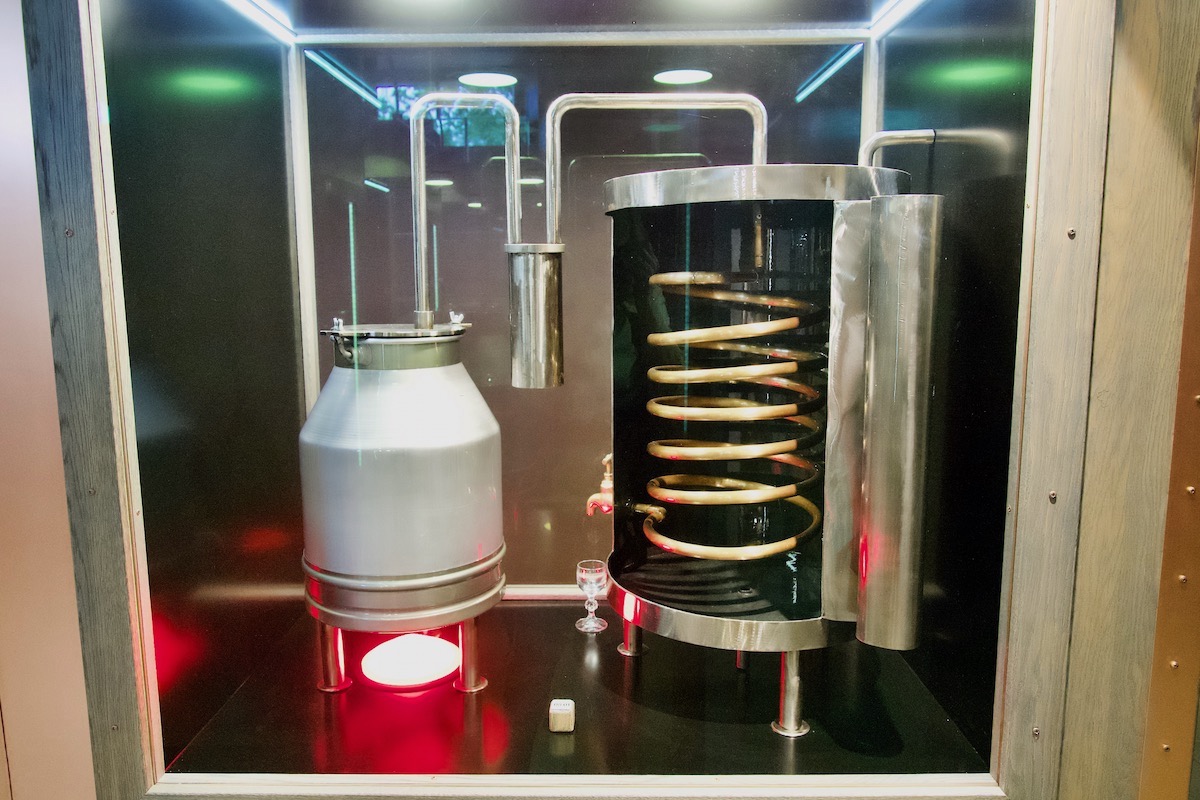 Church Hill in Daugavpils in Latvia

Daugavpils Church Hill is in the Jaunbuve district of the town and was built in 1865. In those days Jaunbuve was populated by single storey wooden houses. Red brick buildings began to appear at the end of the nineteenth century and congregations of various religious denominations increased in numbers. This resulted in the need for new churches in this area. Now there are four churches of different denominations close together here. The first to be built in 1893 was the Martin Luther Cathedral. Two more churches were built in 1905, the Roman Catholic Church of the Immaculate Conception and the Orthodox Cathedral of SS Boris and Gleb. The House of Prayer was built by the first Old Believers’ Community in 1928. I climbed up the tower of the Martin Luther Cathedral to look over the other three churches and the city beyond. 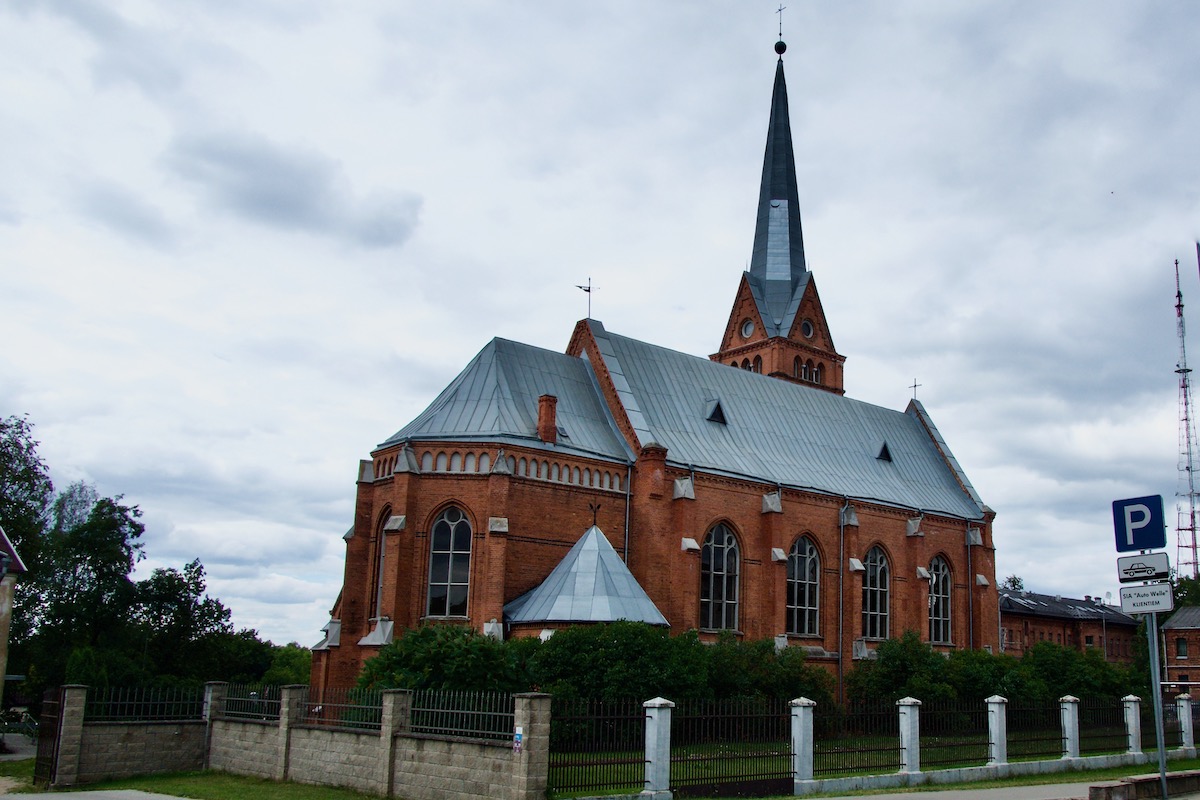 Daugavpils Fortress is often referred to as a city within a city. This unique bastion-type fortress and has been preserved without significant changes since the beginning of the nineteenth century. It features a total of eighty buildings and ten wide streets lined with residential buildings some of which were originally built for the Latvian military. Construction of this fortress began during 1810 but it was not completed until 1878 due to Napoleon’s attack on the Russian Empire. It was used to garrison the Imperial Russian Army until the First World War accommodating up to six thousand soldiers. When Latvia became independent in 1920 the Latvian Army moved in. But only for twenty years as the Soviet Armed Forces returned in 1940. Since Latvia regained their independence in 1991 the fortress has become a residential area in the city with more than one thousand inhabitants. 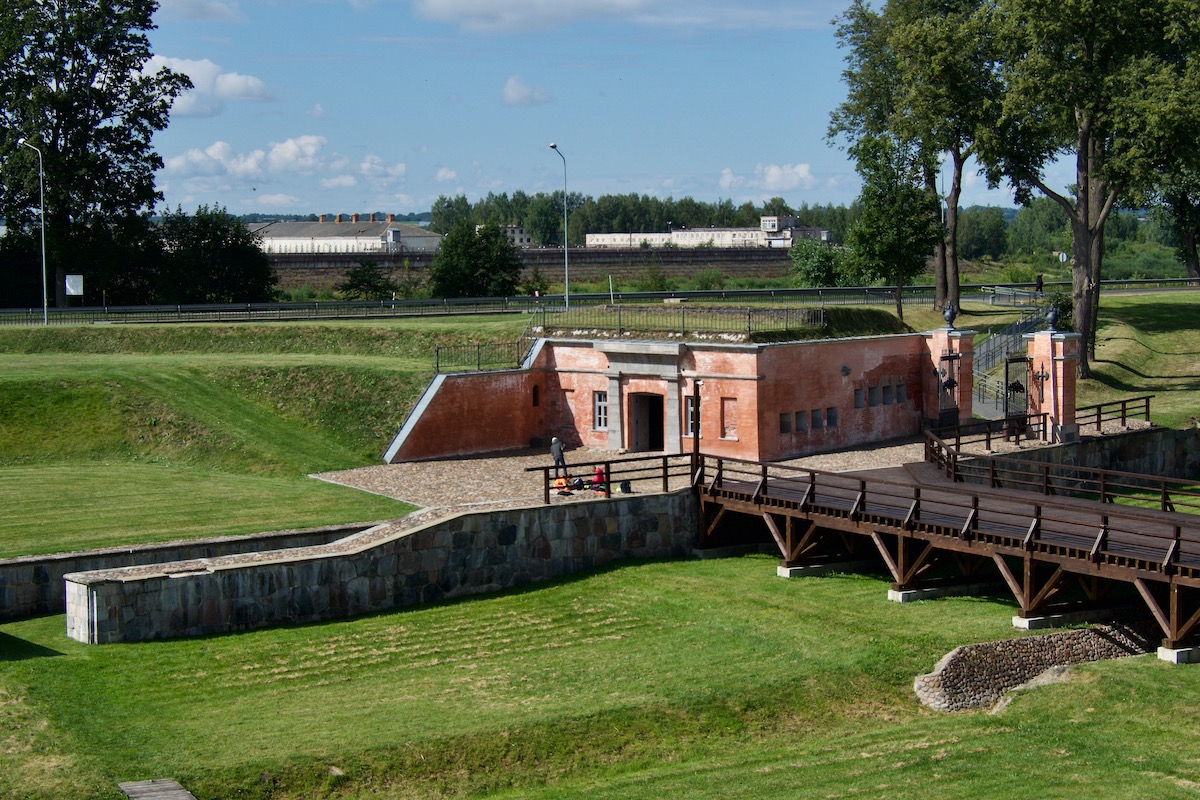 The main buildings of the fortress house museums and a world-famous art gallery. We started our tour in the Culture and Information Centre. This is housed in the former water tower. Its foundations were laid in 1865 and when completed it was part of a system supplying water to the fountain in the fortress. The water was brought into the fortress from three wells on the bank of the River Daugava. The centre houses a small museum documenting the history of the fortress. In another building nearby there is a medical exhibition, inexplicably including a whole section on contraception. Above this exhibition is the Vintage Furniture and Salon Vintaza where all the exhibits are for sale. 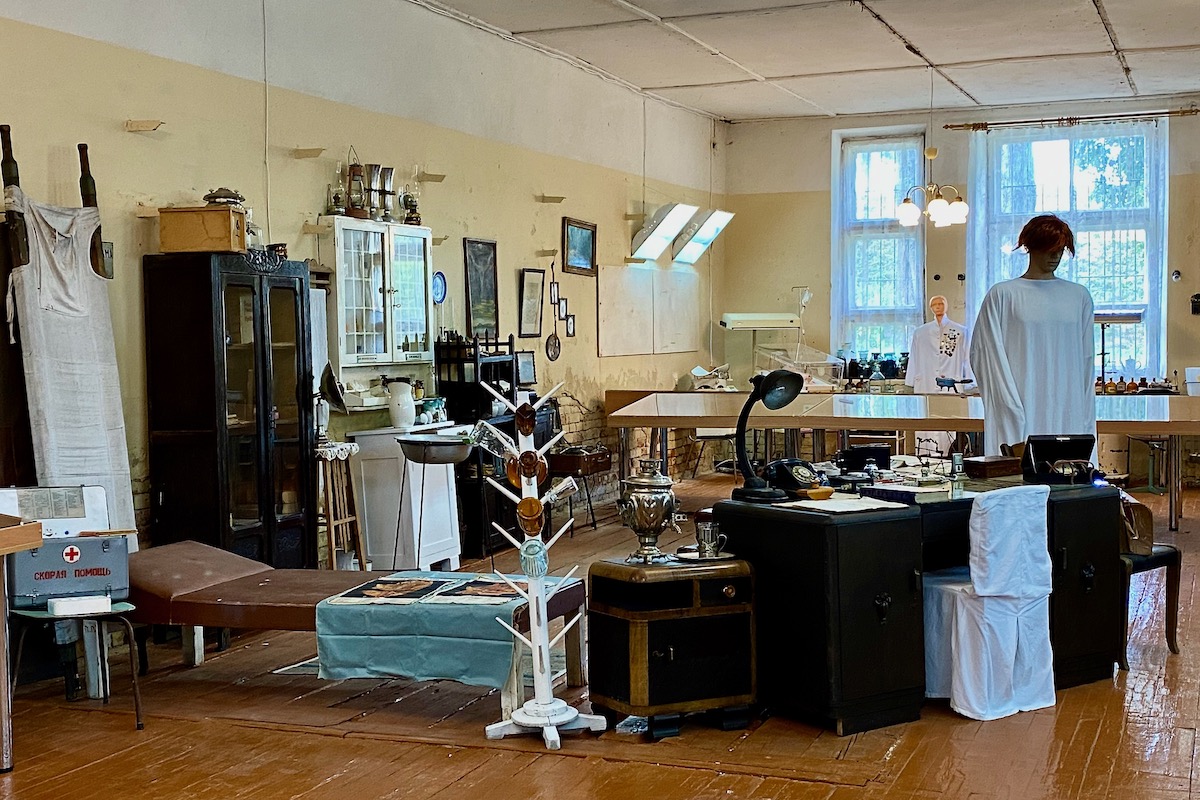 The Mark Rothko Art Centre occupies the former Arsenal of the fortress. It is the most ambitious cultural project in Eastern Europe and the only place in Eastern Europe displaying original works by Mark Rothko. Rothko was born in Daugavpils. He is a founder of Abstract Expressionism and colour field painting. The centre has several galleries offering over forty different shows every year including art projects in different media created by Latvian and International artists. Apart from its cultural treasures the fortress is also a very pleasant place to stroll around its zig-zagging fortifications. 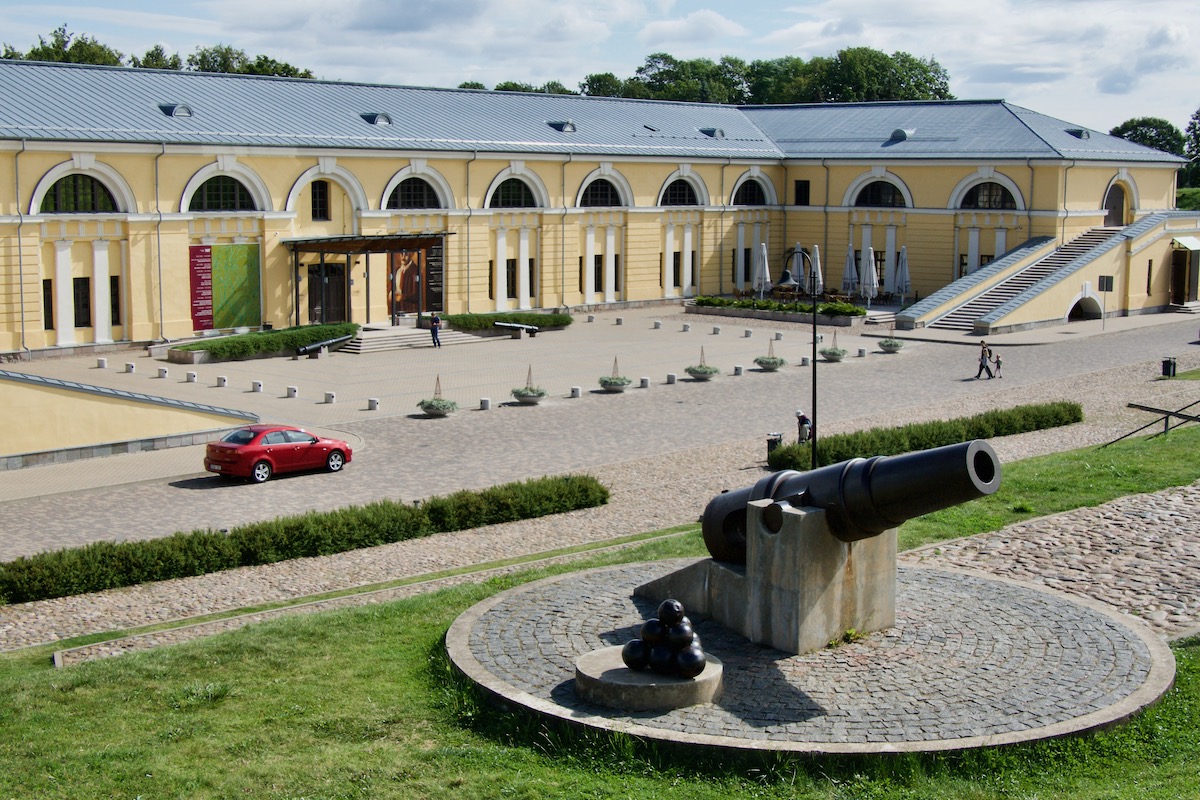 One of the most interesting places I visited in Latgale was the Lead Shot Museum on the outskirts of Daugavpils. It was built by the Soviets in 1886 and deliberately positioned on the outskirts of the town as the process it employed was a pollutant. It features the oldest shot casting tower that still produces lead shot or buckshot. This factory incorporates a tower positioned over a deep well. It employed the process of throwing molten lead from the top of the tower into the well below. Gravity causes the lead to form perfect balls before hitting the water. Viktor was our guide. He is one of only four people who are experts in this process. It was a fascinating tour and it was no surprise to learn that this historic attraction has won a European award. 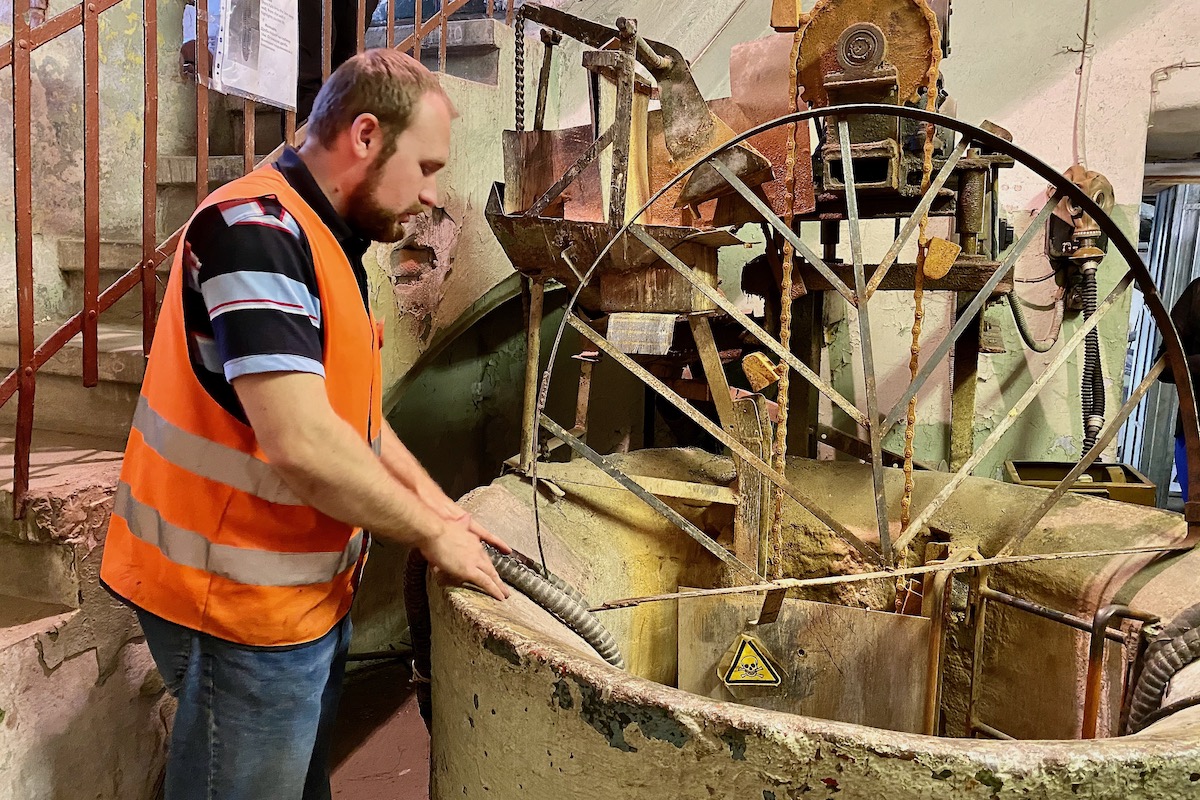 As with many places I have visited in Latvia I arrived not knowing what to expect in Daugavpils and left wanting to return and explore further.