Three Quirky Excursions in the Kurzeme Region of Latvia

Latvia is country rich in cultural heritage and natural landscapes. The region of Kurzeme snakes along its Baltic coastline. It has been settled since the thirteenth century and still bears the evidence of a lengthy Soviet occupation during the twentieth century.

It is a mere thirty years since Latvia emerged from Soviet domination and today it is reclaiming its historical sites. The region of Kurzeme, also known as West Latvia, offers some fascinating and very unusual attractions. My first visit was to the dilapidated Kabile Manor in a small settlement of the same name. 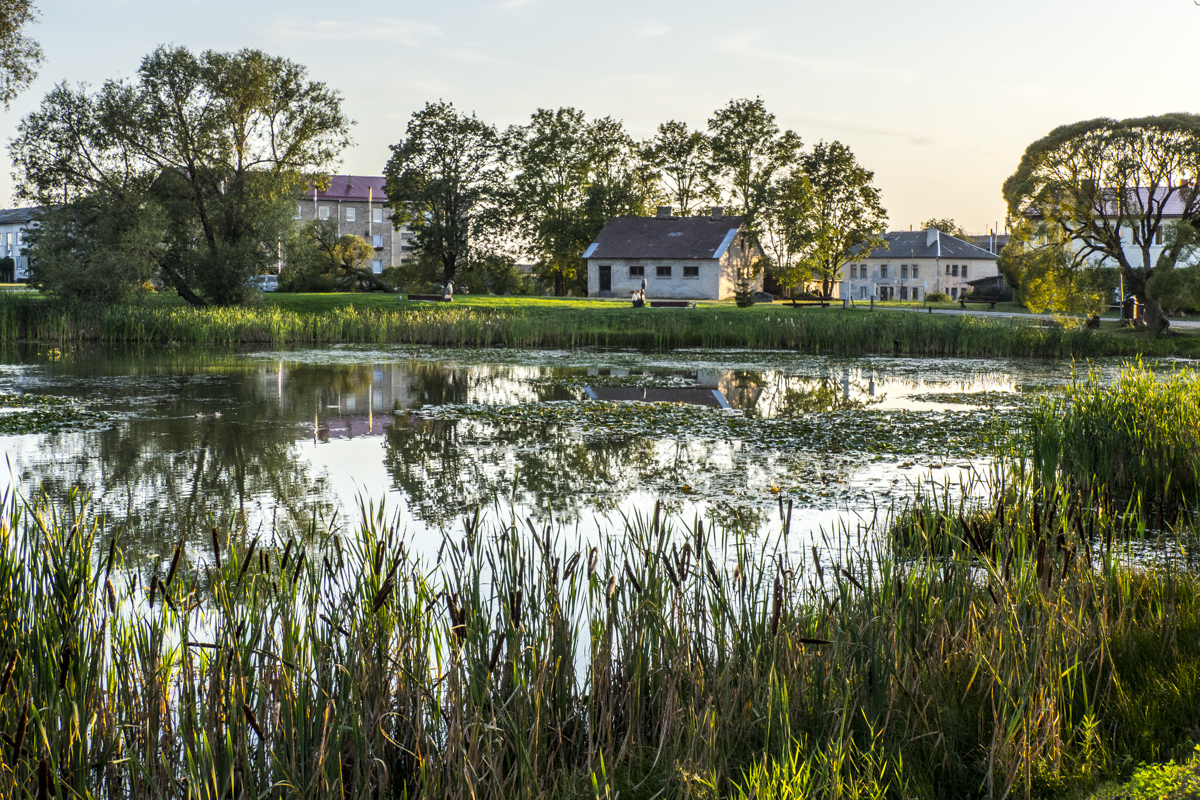 Kabile in the Kurzeme Region of Latvia

Kabile Manor in the Kurzeme Region of Latvia

Not many people can make a slowly decaying building come to life but our guide Māra Griva marketing manager at Kabile Manor Winery had soon drawn us in with her enthusiasm for the renovation project here. Kabile Manor. A project that includes cider and wine-making in the cellars and tastings in the salon. Although there is evidence of a settlement in Kabile since the thirteenth century the manor house was not built until 1734. The lovely baroque style is characterised by the steep attic roof. The estate around the manor house developed from the sixteenth to the nineteenth century. Some of the sixteenth century still exist here but as the estate has been divided they are now in private ownership and not open to the public. A park with benches and paths has been preserved and this is open to the public. 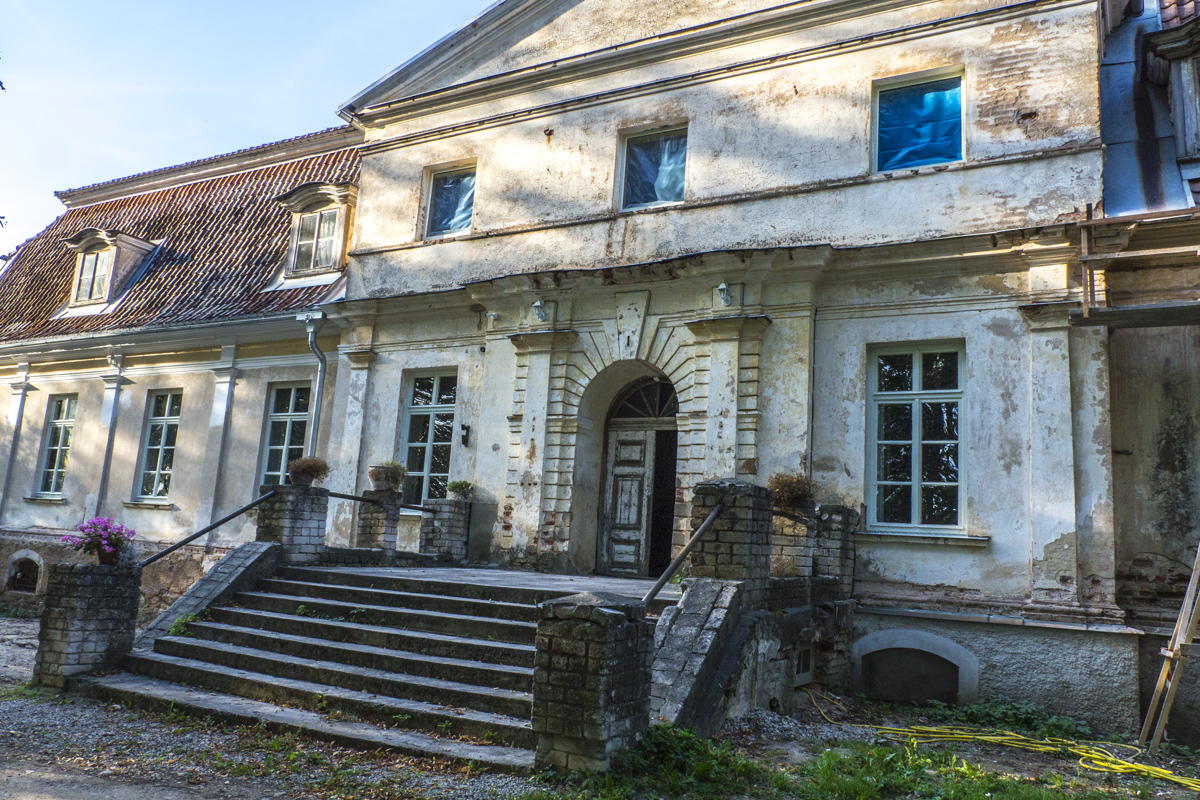 Kabile Manor in Kurzeme a region in Latvia

After exploring the vaulted cellars, I followed our guide inside the manor and up the stairs to the first floor. It is fifteen years since the last occupants left the manor. This floor was a maze of empty rooms that were once small apartments. Wallpaper hung off the walls and the large rusty stoves in the corners of some of the rooms had been the only source of heat. I had to use the torch on my mobile phone to light my way down the back stairs that dipped in the middle – evidence of busy servants running up and down. There had once been a post office in one of the rooms downstairs and the hatch where customers had queued could still be seen. Some of the rooms were sparsely furnished with a random selection of furniture. In one room a large table was surrounded by an assortment of chairs and groaned under a mismatch of crockery. This room is available for hire for birthday parties but only in the summer as there is no heating to combat the winter cold. In the next room there was a display of the wines and cider produced by the Kabile Manor Winery. 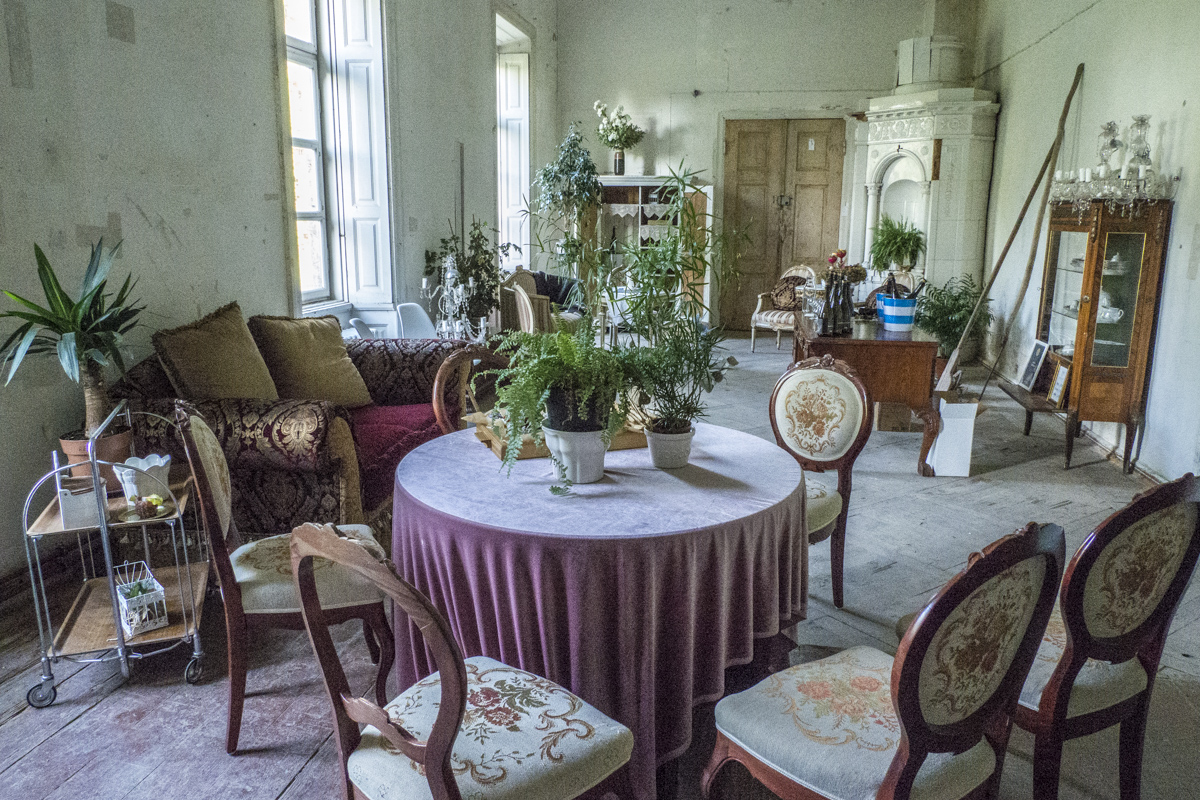 Inside Kabile Manor in the Kurzeme region in Latvia

The Kabile Manor Winery is located in the vaulted cellars of the manor house.  Wine was stored here during the eighteenth century.   Now it is being made there as well as cider.  Ancient recipes and traditional methods are used to create modern flavours. Ingredients include hand-picked apples and rhubarb from a farmhouse in the region of Kurzeme. The only mechanical methods used are for grinding fruit to extract the juice. The cider is one hundred per cent handmade.  Our tasting was held in a sparsely furnished salon in the manor.  A bit of mystery and imagination. It was accompanied by some delicious nibbles from a local bakery.  First we tried the classic apple cider made from 100% pure apple juice.  It was delicious, light and refreshing.  We also tried a pink sparkling cider made from rhubarb. The quince sparkling wine was the show stopper – it was so good. 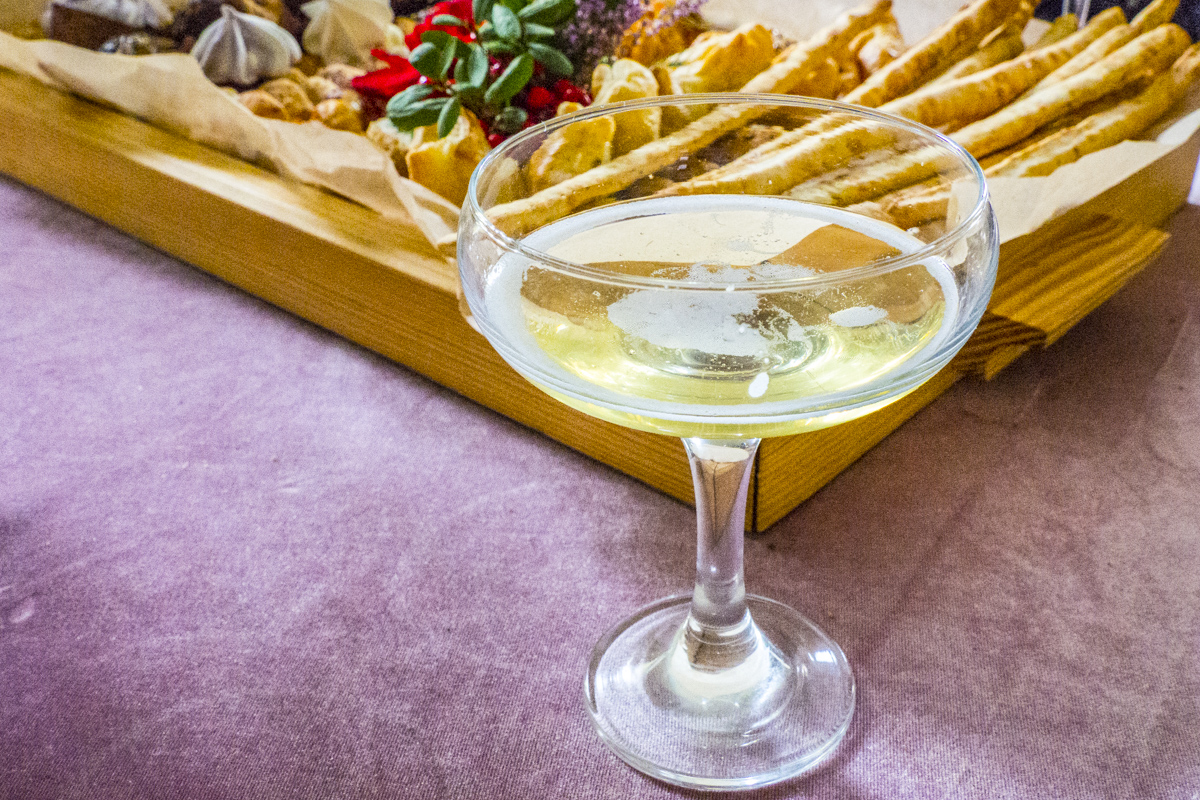 Tasting Cider in Kabile Manor in Kurzeme a region in Latvia

Ēdole Castle in the Kurzeme Region of Latvia

The pretty pink, pristine Ēdole Castle is a complete contrast to the elegant decadence of Kabile Manor. This Gothic Revival castle is situated on the banks of Ēdole Lake. The original castle was built around 1264 and it is the only thirteenth century castle in Kurzeme that is still inhabited. Built and managed by the Livonian Order it was passed on to the family of a German baron in 1561. This family occupied the castle until they fled to Germany in 1939. While they lived there the building underwent several renovations resulting in the castle we see today. In 1905, during the Russian Revolution the castle was almost completely destroyed by a fire. A major re-build took place between 1911 and 1916 when the wooden tower was added. During the Second World War the castle was used as a military hospital by both the Russians and the Germans. After the war the castle once again became the village centre with a school, post office, court, culture centre and a nursing home. The nursing home finally closed in 1984. Following the failure of various projects, the castle was sold at auction in 2007 to its present owners. 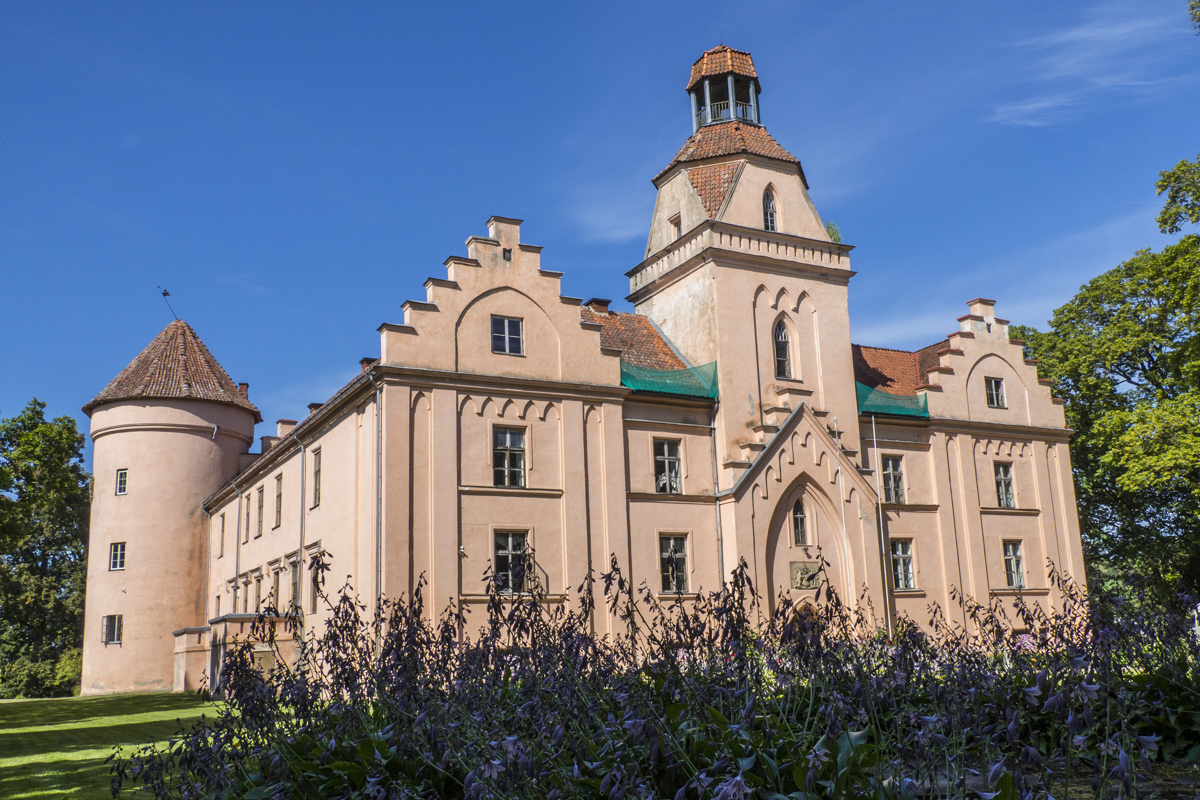 Ēdole Castle in the Kurzeme Region of Latvia

The castle has been restored and the second floor is decorated as it would have been more one hundred years ago. Displayed on the third floor is the owner’s private collection. A delightful mixture of toys and sewing accoutrements. 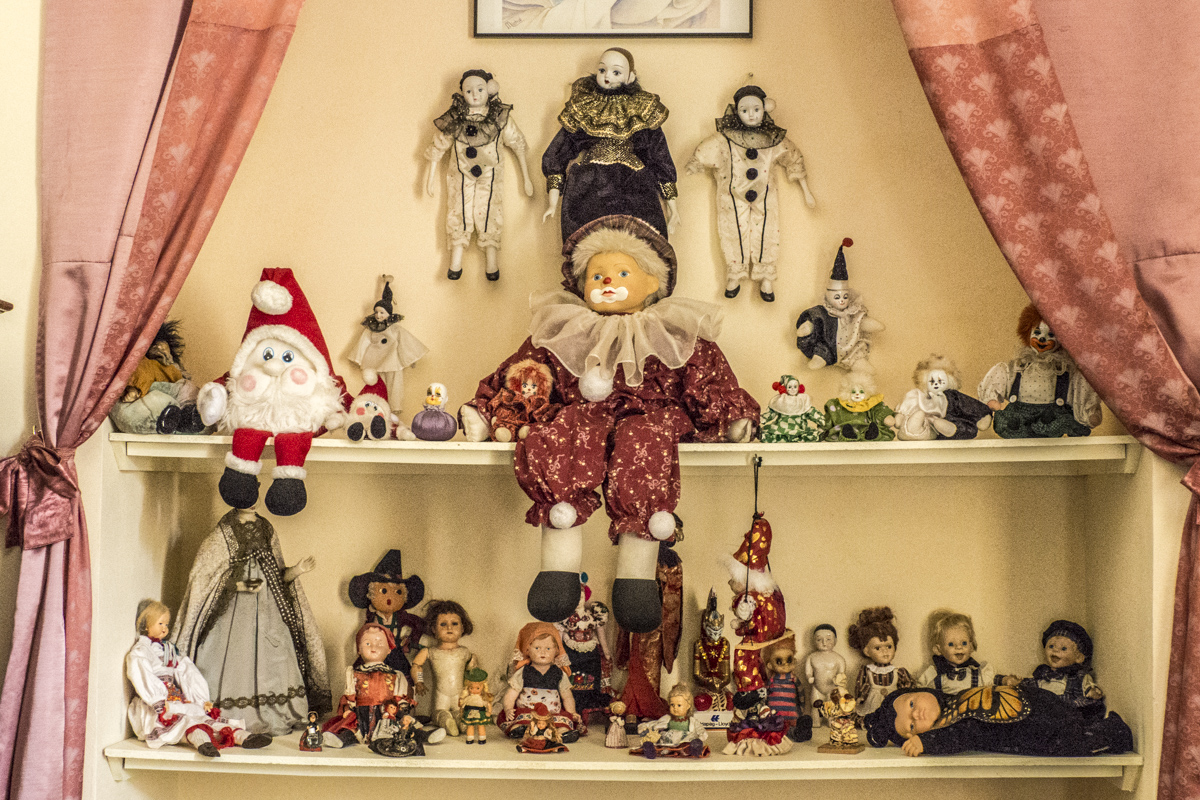 Inside Ēdole Castle and Museum in the Kurzeme Region of Latvia

I was delighted to discover that the wooden castle tower is open to visitors and was soon clambering up several narrow wooden staircases to a dizzy thirty-two metres. The small viewing platform at the top is fenced in but this does not spoil the views of the surrounding countryside and the castle courtyard below. There are cellars and a thirteenth century well in this courtyard. During the Second World War this well was filled up. In 2008 work began on cleaning it out. At present, the well has been cleaned out to approximately half its depth. But to contain water it needs to go down to at least seventeen metres. After climbing the tower, I was happy to spend some time relaxing in the ballroom. As I listened to the stirring music I could imagine brightly clad dancers whirling around the spacious dance floor. Since 2015 a hotel and a restaurant have been incorporated inside the castle. I lunched here in style before moving on to a Suiti Cultural Space to learn about the Suiti culture. 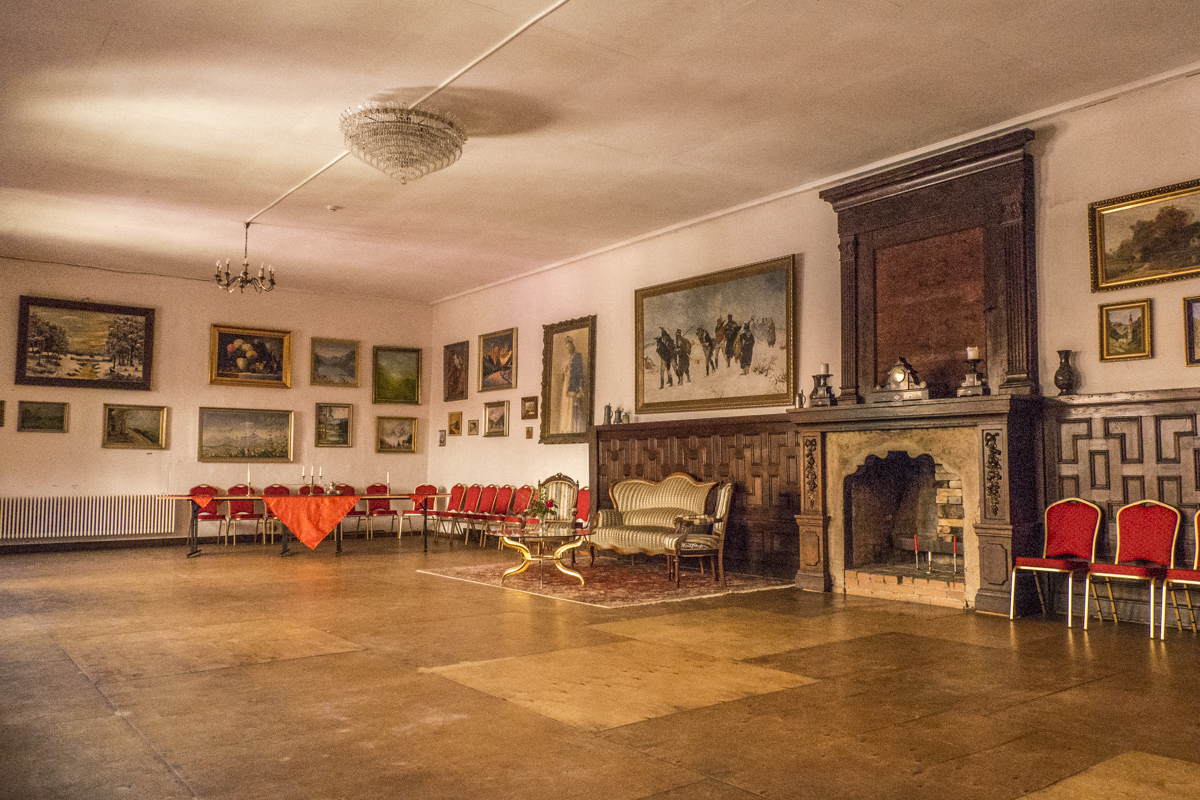 The Ballroom at Ēdole Castle in the Kurzeme Region of Latvia

The Suiti Culture in the Kurzeme Region of Latvia

The Suiti are a
small Catholic community in the predominantly Lutheran Kurzeme. They speak and sing in a unique variant of the Latvian language (the Liv dialect). They are found in two places one of which is the small village of Jūrkalne near Ventspils. And this was where I met three of them. Dressed in traditional costume they demonstrated the most famous of their traditions the vocal drone singing, known as the bourdon polyphony, performed by the Suiti women. In 2009 their culture was deemed to be in danger of dying out and since then it has been protected by UNESCO I was privileged to be able to listen to an outdoor performance of their songs. This included a very lively rendition of a song about a rivalry among the women regarding the most colourful stockings. As they sang they lifted their voluminous red skirts to display an interesting collection of colourful stockings concealed beneath them. It was a memorable experience. As was my next visit, to an old Soviet Radio Station. 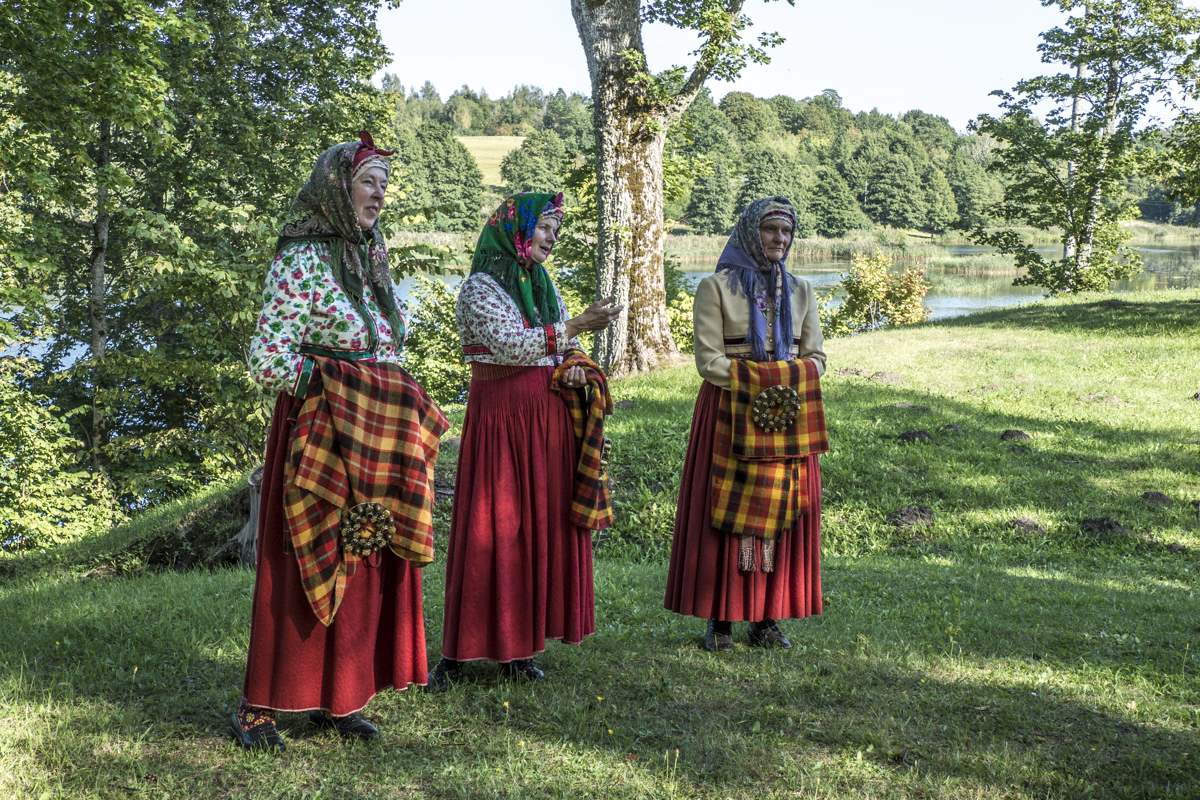 Suiti Women Performing in Jūrkalne in the Kurzeme Region of Latvia

Ventspils International Radio Astronomy Centre is located in the village of Irbene. This village is a former Soviet army town and was abandoned when the army moved out. Today the centre is operative and is currently managed by the Ventspils University College’s Engineering Research Centre. My guide was Arnis who is also a technical worker at the station. We started our tour by walking along the tunnel that was built to carry cables. The total length of this tunnel is twelve hundred metres but we only walked half that distance. Accompanied by a few pipistrelle bats that live in there. We emerged by a thirty-two metre wide radio telescope, the RT-32 which is used for scientific purposes. It is the largest of its kind in Northern Europe and the eighth largest in the world. 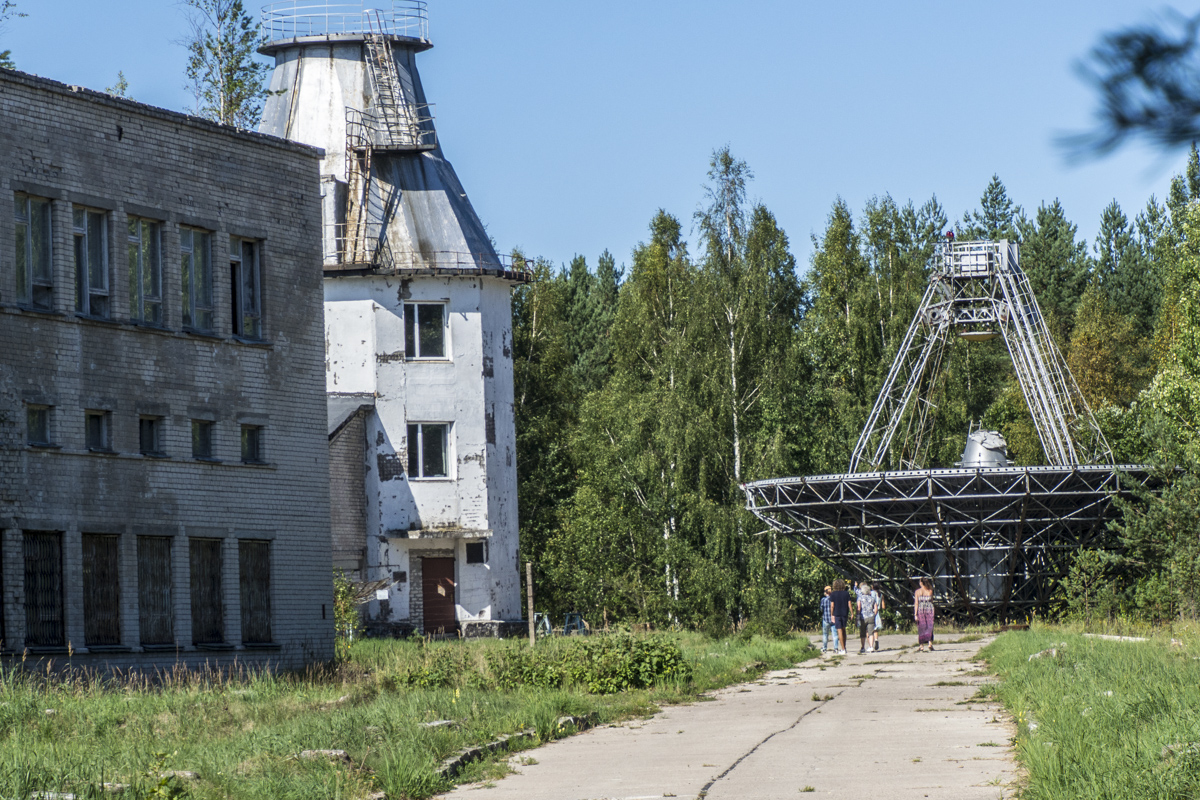 We re-traced our steps along a path by the woods and then went into the tower and explored each of the floors inside. On each floor there is a display relating to the time the station was run by the Soviet army. When they left they took one of the three original radio telescopes as well as other important items but did not destroy everything – it seems they were expecting they would be back. On display in the tower is a Soviet Star, acquired in exchange for a packet of cigarettes. 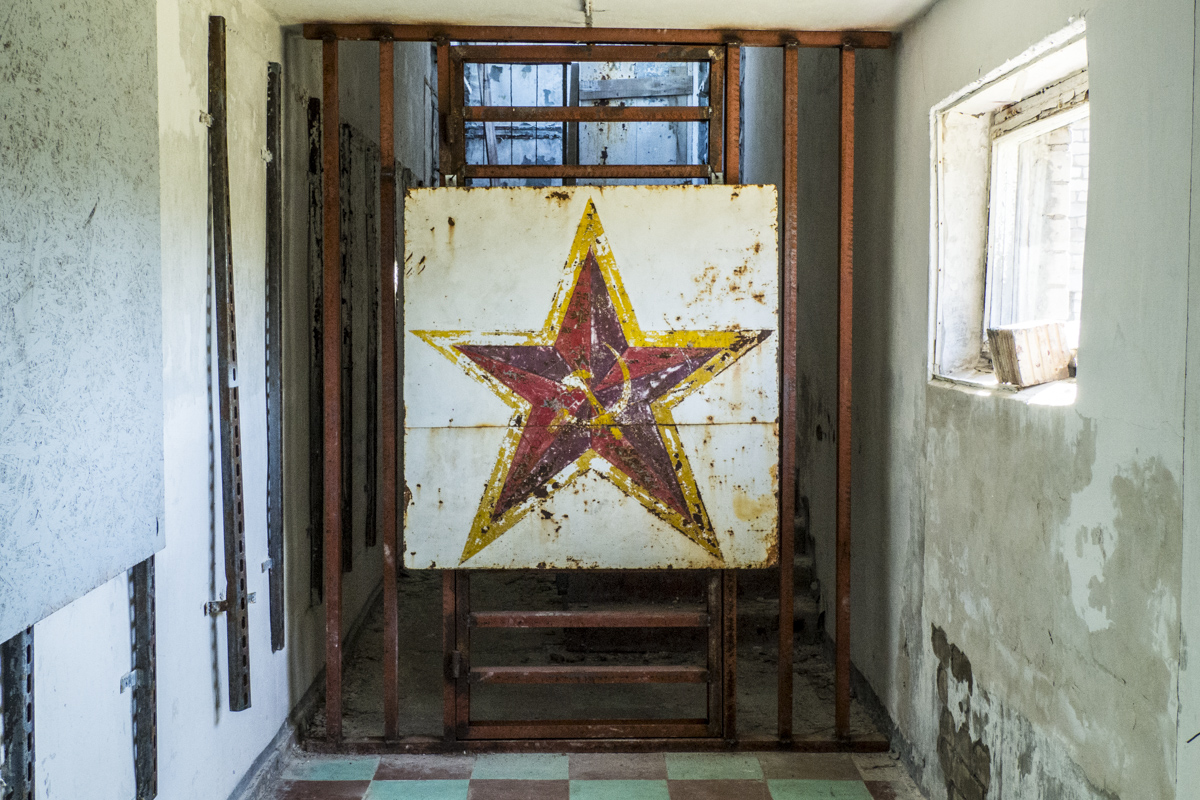 Finally, we climbed the two exterior metal ladders to the top of the tower to enjoy the views including the Irbe River that flows past the centre. From here we also had a clear view of the second radio telescope that is operational here. It was a lovely way to end a very interesting tour before setting off on a jeep safari through the surrounding forest. 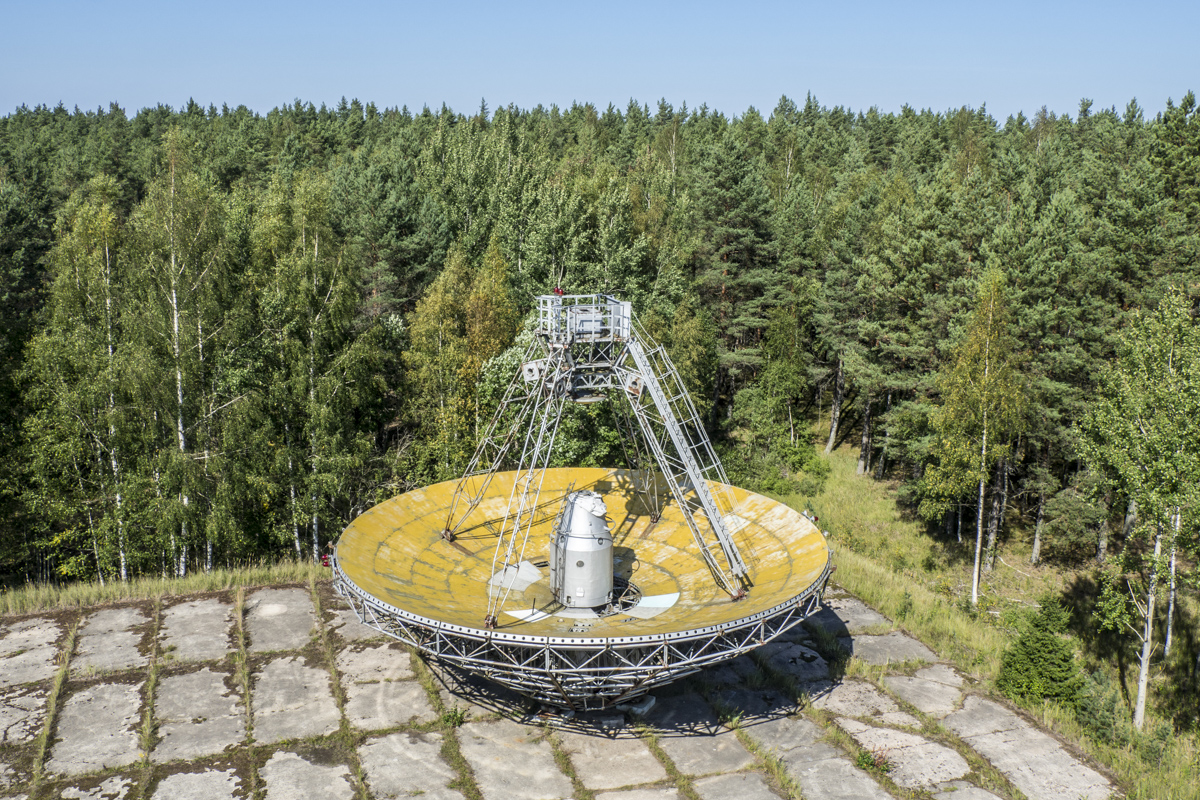 Surrounding the Ventspils International Radio Astronomy Centre is Dabalaba an area of vast forest, clean rivers and marsh lakes. It has the smallest population density in Latvia. But it does have a high density of wild animals including deer, lynx, moose, badgers and many birds. Initially our safari route followed the trails the Soviet tanks would have taken while training in this forest. We then followed the only safe road through the Ance swamps stopping to pick wild berries and admire the marsh lakes en route. Our journey ended at the Forest Café where we lunched on pizzas in the open air. 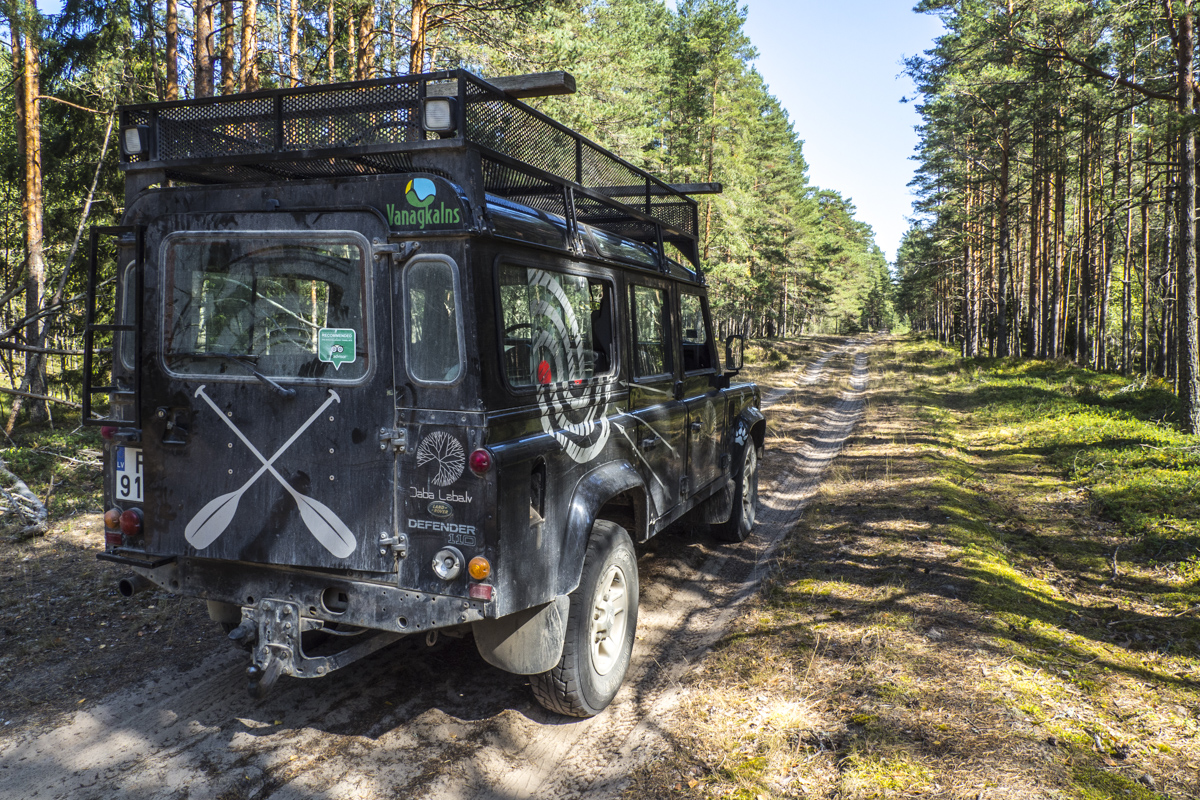 Jeep Safari through Dabalaba in Kurzeme a regio in Latvia

Where to Stay in the Kurzeme Region of Latvia

Throughout the Kurzeme region there is a good variety of holiday accommodation to suit all tastes and pockets. I stayed in two lovely hotels while exploring this region. Noliktava No 5 in Kuldīga is close to the Town Hall Square so it was very convenient for exploring the town. I had a lovely en suite attic room with a large skylight that opened out to form a small balcony. 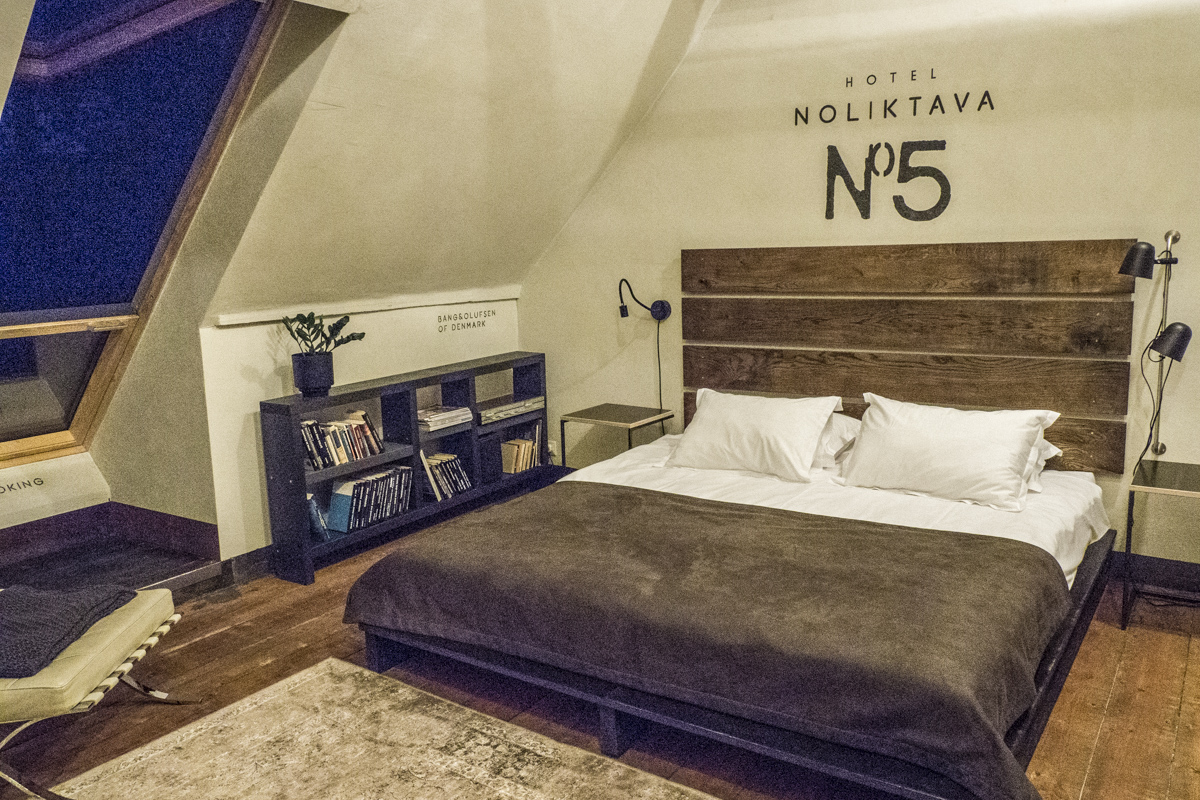 Bedroom at Noliktava No 5 Kuldīga, Latvia

My meals were taken at the Goldingen Room on Town Hall Square. This restaurant has a nice atmosphere and friendly staff. I really enjoyed my evening meal there. The breakfast buffet was excellent. Well-presented and very varied. 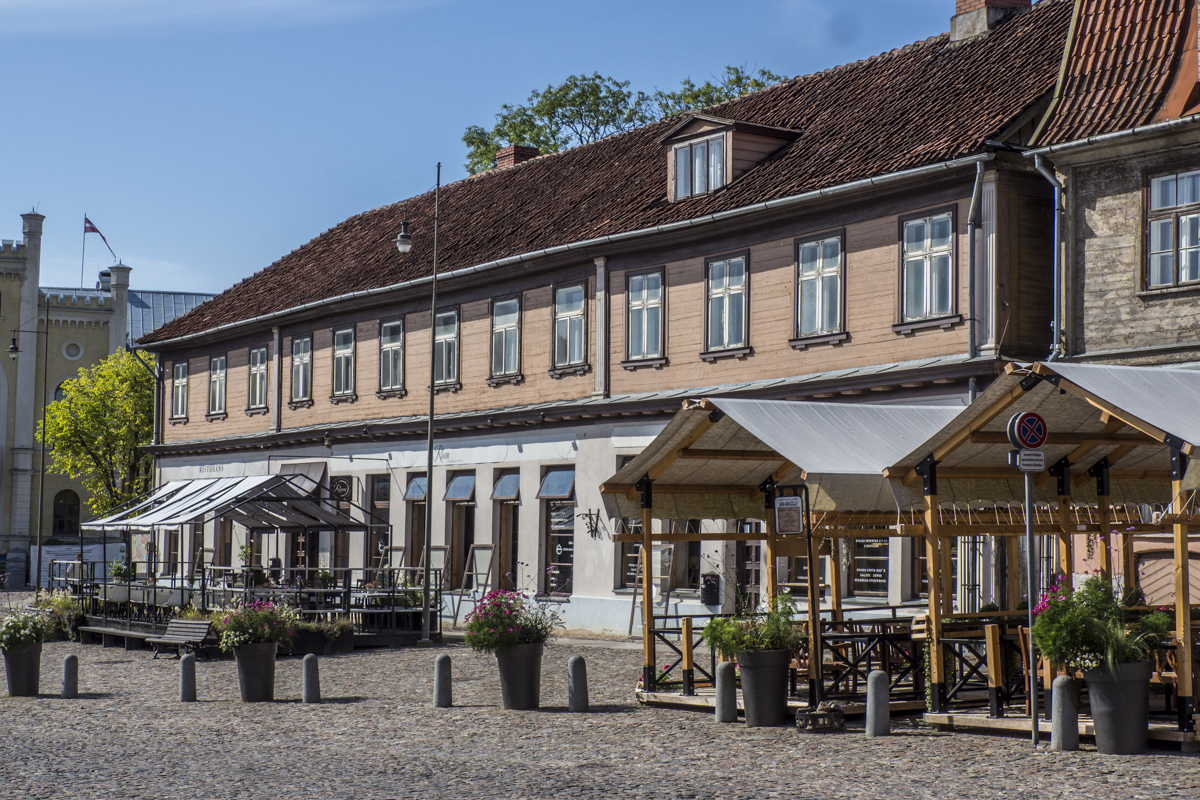 Goldingen Room in Kuldīga in Latvia

I also stayed at Vēju paradīze in Pāvilosta. This two-storey hotel stretches along two sides of a grassy courtyard. The rooms are rustic and comfortable. The place has a lovely ambience especially when the glass frontage of the main building is lit up by the late evening sun. The hotel has a restaurant serving a good variety of dishes both conventional and traditional. Meals can be taken outside on the veranda – a very pleasant experience. A short walk from the large, sandy beach this is a lovely place to stay.

Getting to the Region of Kurzeme in Latvia

Air Baltic operates direct flights to Riga. There is public transport available to the main cities and at very reasonable prices. To benefit from the interesting and varied attractions in and around Jūrmala the best form of transport is probably a bicycle although there are regular bus services which are very cheap.