Having explored the attractions close to our hotel we spent the next three days exploring Rome by public transport.

Anxious not to be late for our appointment with Manuela, our guide, at the Colosseum I under-estimated the ability of our pairs of visually impaired guests (VIs) and sighted guests to navigate the metro. A well-designed concourse and clear signage makes it easy to navigate and separates those dashing into the station from those rushing out of the station. Having already bought the tickets (€1.50 per journey) we had found the right platform and were on our way within minutes of arriving at the station. We emerged into the sunshine bathing the most famous double amphitheatre in the world a full thirty minutes before we were due to meet Manuela. We were ahead of the crowds so it was a good opportunity to take some photos before we started our tour. 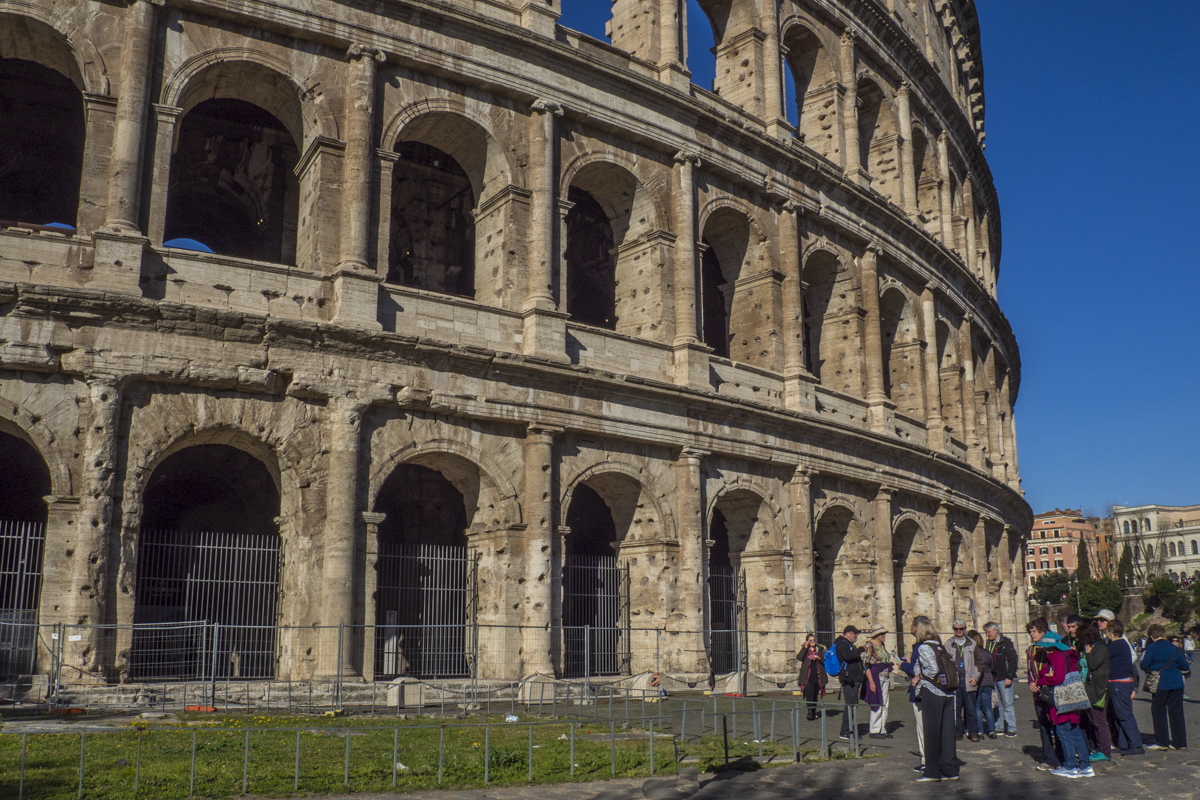 The Colosseum in Rome

The Colosseum, Palatine Hill and Forum in Rome

We entered the Colosseum through the gladiators’ door which took us straight into the Arena. This meant that not only did we skip the queues we could imagine what it must have been like for the gladiators themselves – being watched by 80,000 spectators including the Emperor himself. This huge stone double amphitheatre was officially opened in 80 AD and officially named the Flavian Amphitheatre. Over the next four centuries it was used for a variety of games including gladiatorial combats and wild animal fights. It was then left empty and fell into disrepair until the eighteenth century when it was plundered for building materials. Two-thirds of the original Colosseum has been destroyed over time but it is still a magnificent tribute to the Roman engineering and ancient customs. During our tour our VIs were able to feel the fabric of the building and run their hands over some of the artefacts on display in the small museum. Sighted guests could out loud read the information boards scattered around and we were all amused by the list of items that would form a typical picnic for spectators. Wine was rationed but there was plenty of fresh water available from fountains. 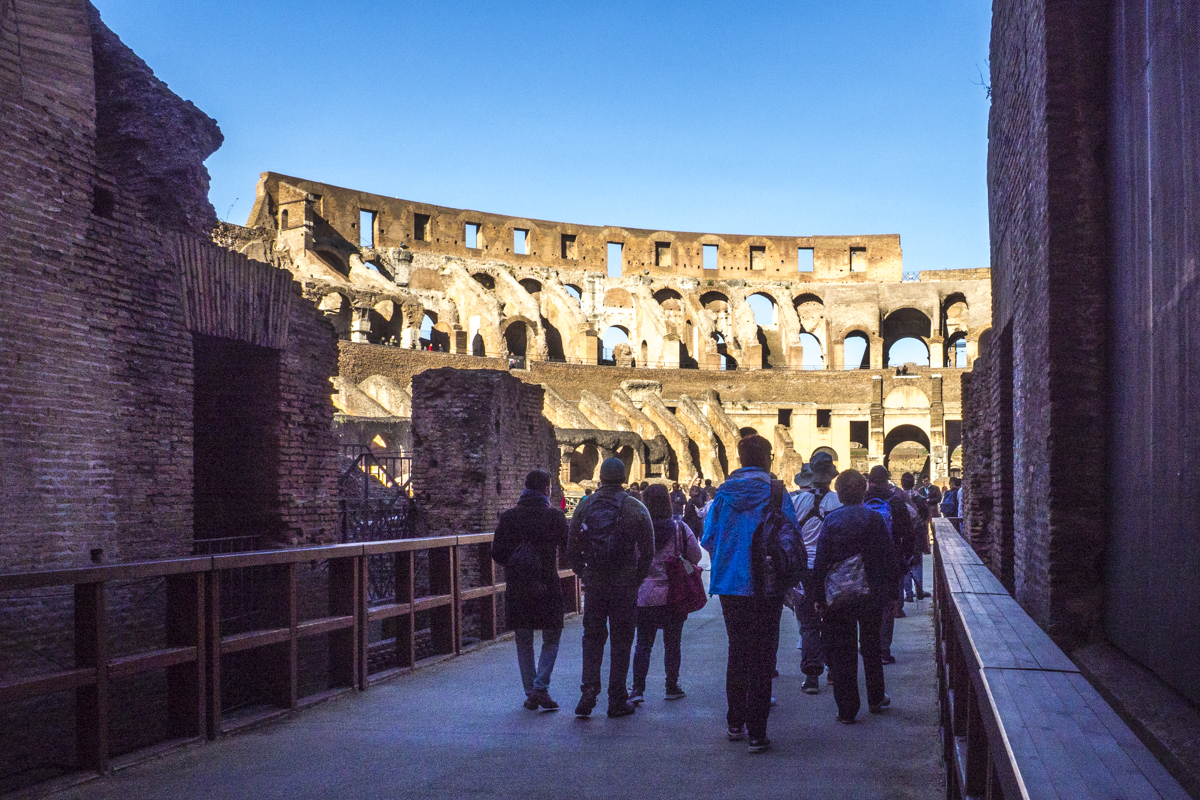 Entering the Colosseum through the Gladiator’s Gate

The Palatine Hill, the most important of Rome’s Seven Hills, is a short walk from the Colosseum. It is believed that this hill was first inhabited in 1000 BC and the original settlement that later developed into the city of Rome. Upper class Romans built magnificent residences on this hill and parts of them can still be seen today. Strolling in the shadow of the trees, enjoying sweeping views of Rome and its ancient Forum below it was easy to understand why this used to be the most desirable place to live in Rome. I was particularly impressed by the Renaissance Farnese Aviaries in the last surviving section of the Farnese Gardens. Built over the ruins of the Palace of Tiberius and occupying a large part of the Palatine Hill they were one of the first botanical gardens to be created in Europe. The original gardens, including the two large aviaries, were commissioned by the young Cardinal Farnese to be used as a retreat from the city. As the grandson of Pope Paul III he had access to huge sums of money. 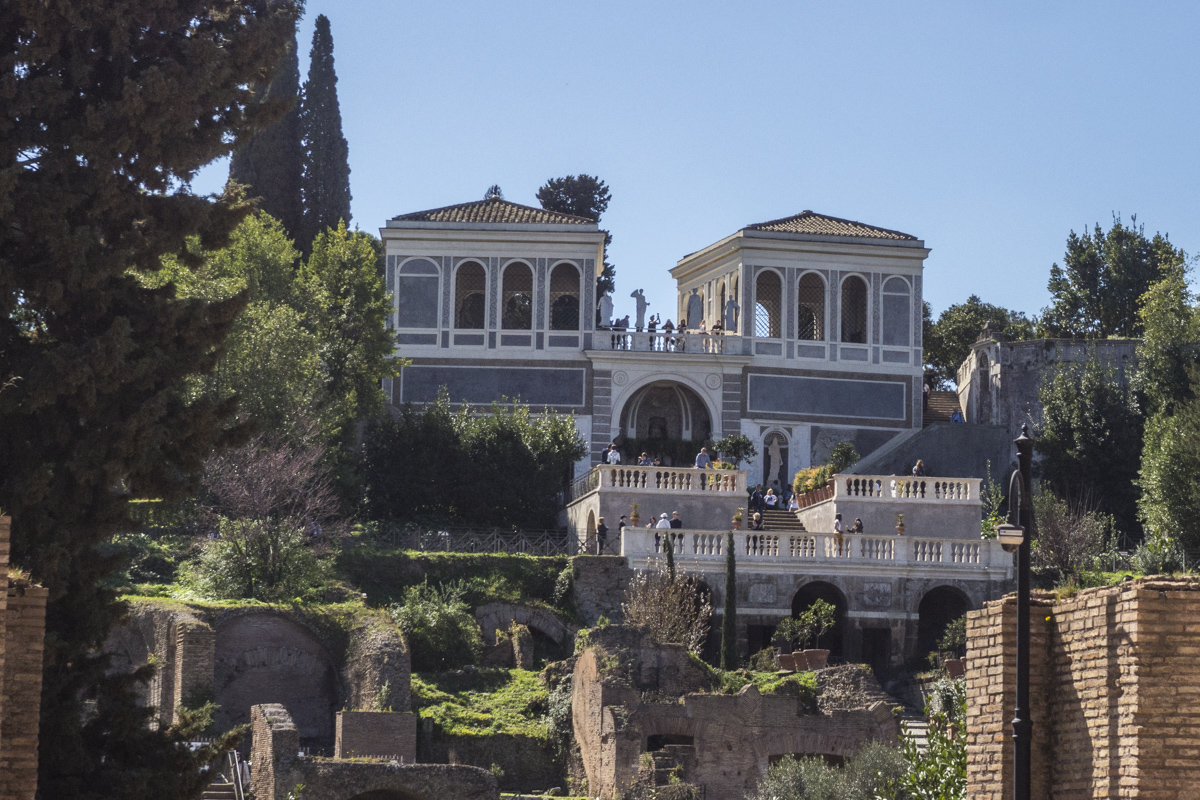 The advantage of having free time in the afternoon was that the group could decide (with their partners) which of the many interesting sights to visit. After a relaxing lunch at la Taverna dei Fori Imperiali close to the Colosseum several people in the group decided to walk back to our hotel and visit the Basilica della Santa Maria Maggiore on the way. This ancient papal basilica, one of the four major basilicas in Rome, is a must-see in Rome. If only to marvel at its immense exterior and the incredible ornamentation of its interior. It was Pope Liberius who, in the mid-fourth century, commanded that this basilica be built here on the site of a pagan temple. It was shaped according to a miraculous fall of snow and initially named Santa Maria della Neve (Saint Mary of the Snow) and after trying other names it is now officially called Santa Maria Maggiore as it is the largest church in Rome dedicated to the Virgin Mary. Different parts of the buildings belong to different architectural eras which blend together to encapsulate the most important stages of Christian art in Rome. 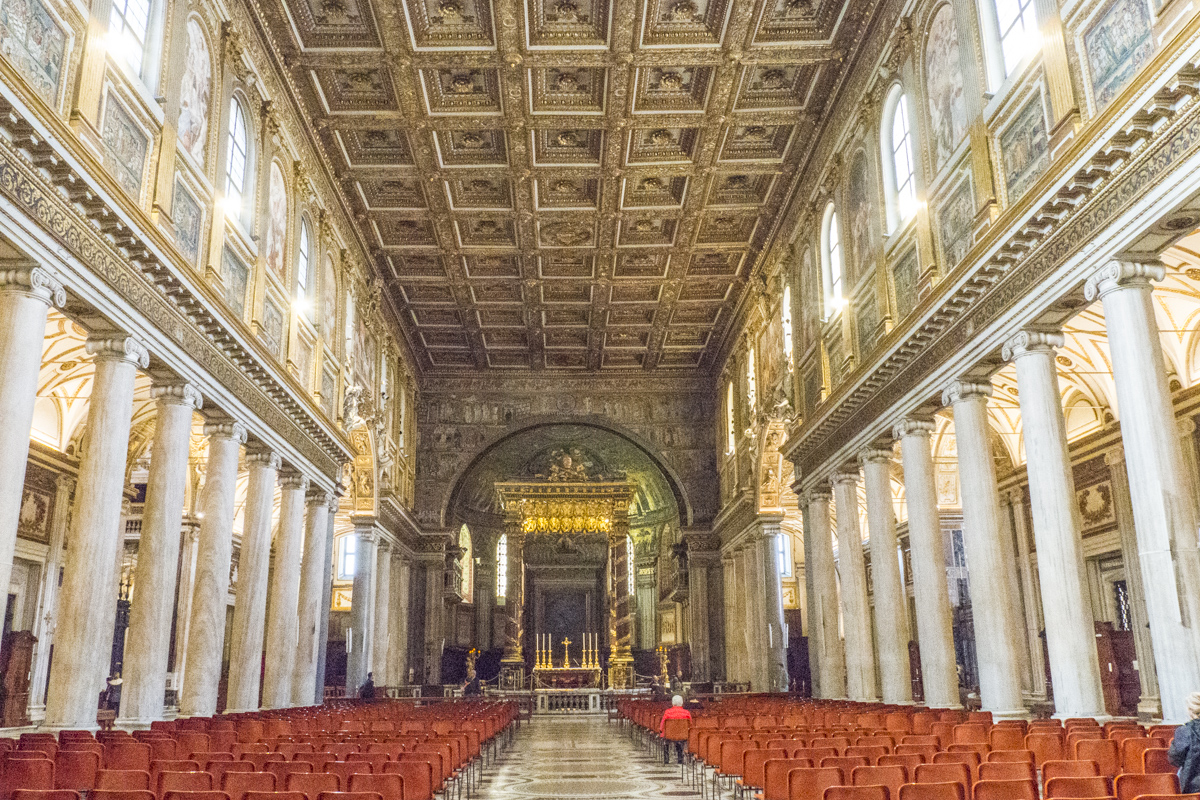 The Interior of the Church of Santa Maria Maggiore

The Vatican Museums, Sistine Chapel and Basilica of Saint Peter in Rome

The Italians are very good at looking after those requiring special assistance and after going through the security check at the Vatican Museums we were ushered past some long queues and were soon able to start our tour with Manuela. We started at the original entrance to the museums, a stunning spiral of stairs with carved walls that the VIs were able to explore with their hands. Next, to their great joy, they could run their hands over a copy of Michelangelo’s Pietà at the entrance to the galleries of the museums. We did a shortened tour of the museums which cover a total of 7.5 kilometres. Every gallery was opulent in its decorations and collections of artefacts. I particularly enjoyed the gallery of maps lined with intricate maps and frescoes of every area and important town in Italy dating from the sixteenth century. The Gallery of Tapestries was also impressive but, of course, the main attraction here is the Sistine Chapel and the ceiling and wall painted by “Michelangelo”: https://www.britannica.com/biography/Michelangelo. 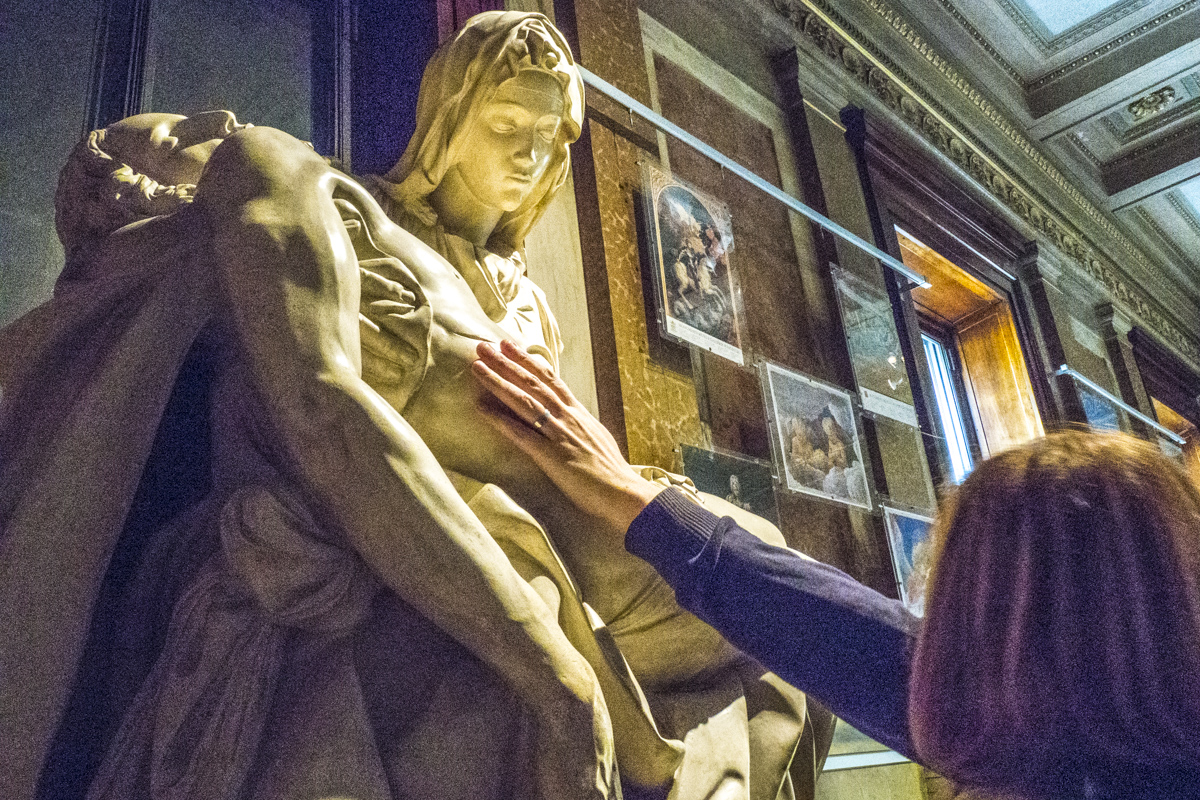 After making our way into the Basilica of Saint Peter from the museums we had a chance to admire the original Pietà sculpted and signed by Michelangelo. This is the only piece of work he ever signed and he did so some years after it was completed when he overheard his masterpiece being credited to another sculptor. The original, great basilica, built to enclose the body of the Christian martyr, Saint Peter, was consecrated in 329. Construction of the present basilica, known as the church of the popes, was begun in 1506 and completed in 1615. As we strolled around the huge seat-free nave we were allowed to touch several features including the stunning holy water font featuring two marble winged cherubs and an enormous tomb both of which we were allowed to touch. Our tour of the Vatican City was followed by a late, leisurely lunch in a small, cosy restaurant on Borgo Pio not far from the Basilica of Saint Peter. This street is lined with restaurants and the further you walk down it the better they are, several of them offering good food, homemade food, at reasonable prices. 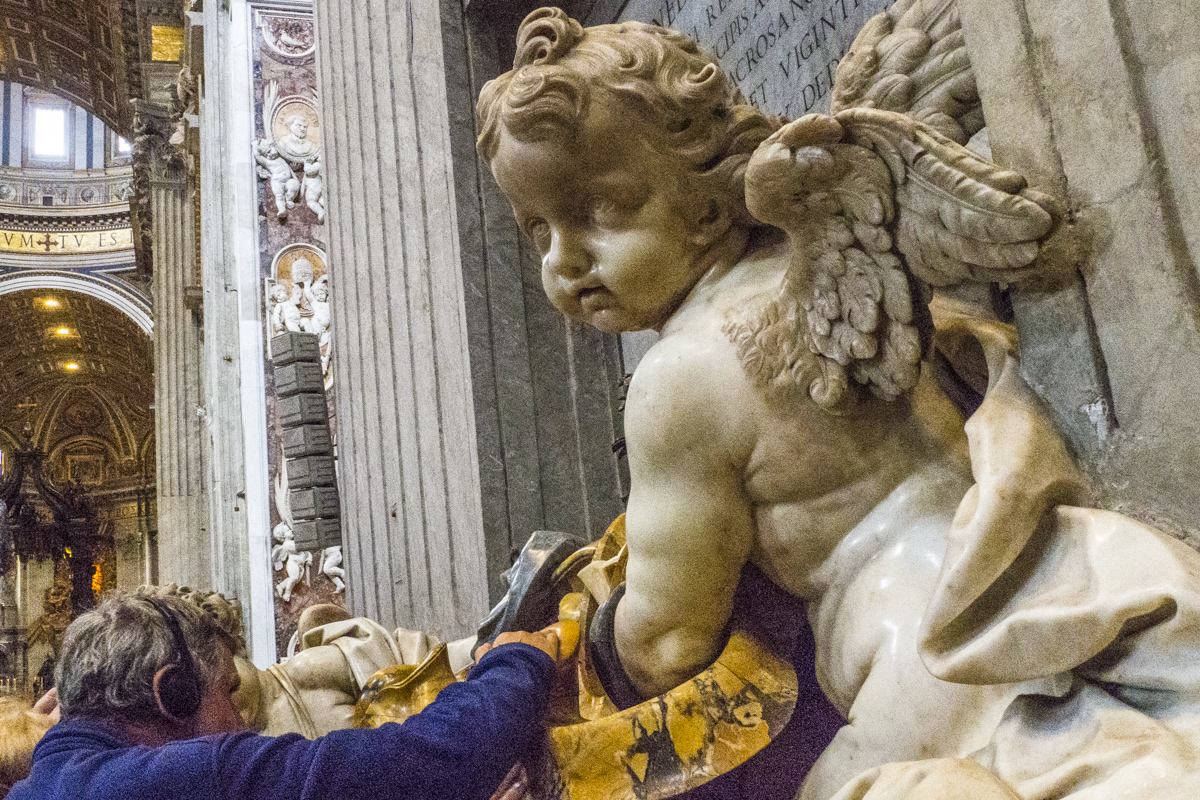 Holy Water Font in the Basilica of Saint Peter in Rome

Buses in Rome replicate buses in London they run all day at frequent intervals but there are either none or three together. We were fortunate that when our bus broke down there was one a few minutes behind it so we arrived at the appointed time and place to meet Manuela for our tour of the Galleria Borghese We had arranged to meet early so we had time to explore a very small part of the huge park known as Villa Borghese. It is thanks to the wealth of the cardinals and popes of Rome that this beautiful park with it fountains, clocks and temples has survived to this day. The land was first acquired by Cardinal Scipione Borghese in 1605. Scipione was a nephew of Pope Paul V V – and a nephew of a pope traditionally had access to vast amounts of money. As head of the Vatican government Scipione accumulated great wealth through papal fees and taxes which he invested in the family art collection. This collection is now on display in the Galleria Borghese. So precious and fragile is the collection and the rooms that house it we were not allowed to touch anything here but relied on descriptions and tactile drawings created by Manuela. It truly is a villa full of treasures and although we could not touch we could get close enough to appreciate several masterpieces of Bernini including his Rape of Proserpina. 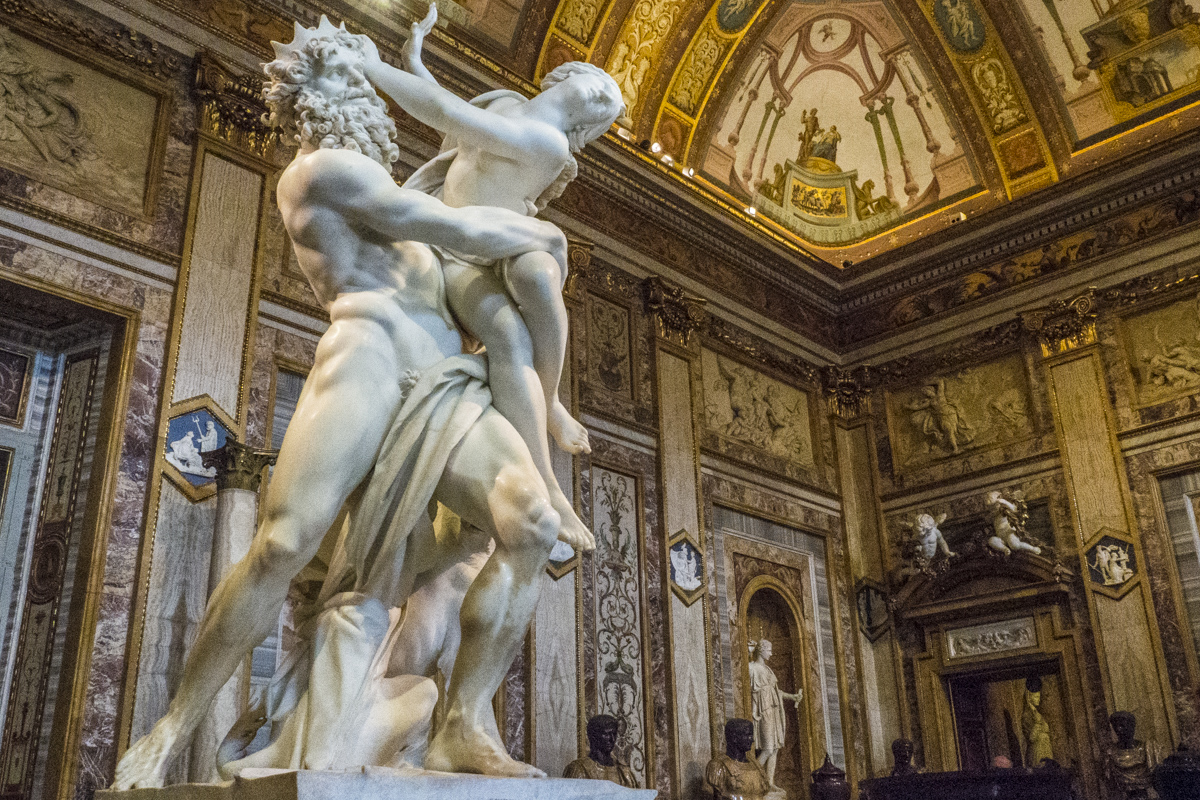 The Rape of Proserpina in the Galleria Borghese in Rome

As it was a lovely, sunny day we stayed in the Villa Borghese to take another stroll in the park as the Borghese family would have done during their three centuries of ownership. The City of Rome has owned it since 1903 and for the Romans it is now a favourite retreat from the city. As it was a Sunday it was busy with Italian families enjoying a day out. After eating al fresco by one of the refreshment vans we visited the Silvano Toti Globe Theatre, a replica of the Globe Theatre in London. We then spent some time watching the boats on the lake and admiring the Temple of Aesculapius on its bank. All too soon it was time to make our way back to our hotel having enjoyed a third excellent day out in the Eternal City. 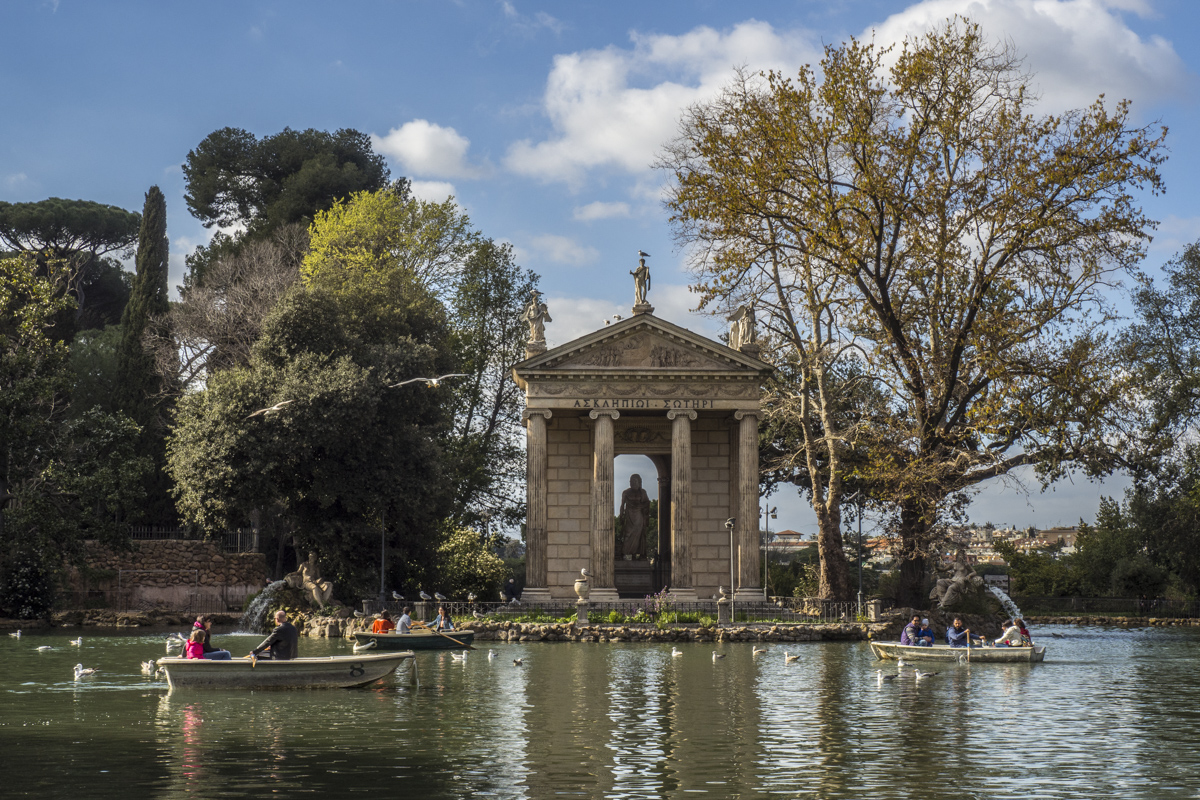 Temple of Aesculapius by the lake in Villa Borghese, Rome