It was with some trepidation that I approached my first trip with TravelEyes, a city break, in Rome. I need not have worried as my visually impaired companions (VIs) soon put me at ease.

We were staying in the Aberdeen Hotel close to the centre of the city and housed on two floors of a large palazzo. That, in itself was thrilling. I loved ringing the bell outside and then stepping through a small door (within a huge wooden door) into the courtyard beyond. Each morning we paired up with our partners and set off to explore the city – touching and talking – with our lovely guide Manuela. 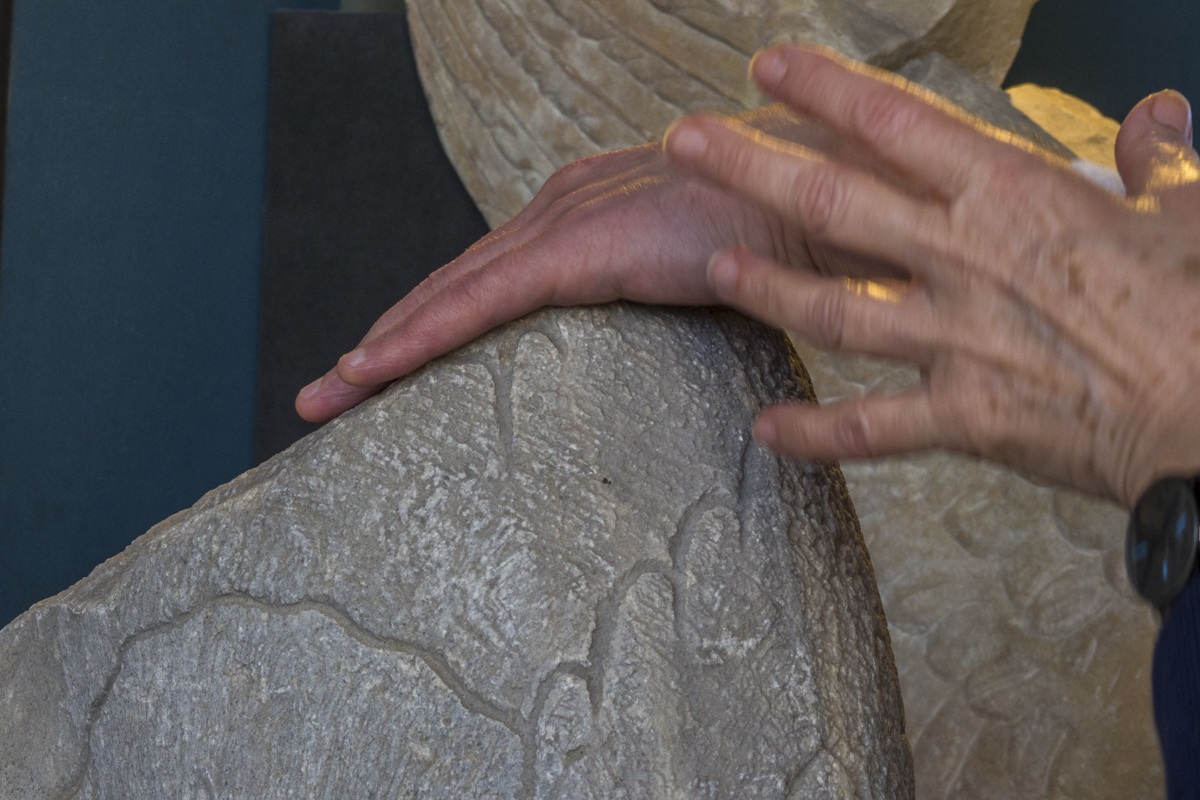 A Walking Tour from Piazza Barberini to Piazza Navona

Soon after we left our hotel I realised I was seeing things I would never have noticed normally as I was listening to the descriptions of the guides – the street that led us into Piazza Barberini was lined with orange trees laden with fruit. I stopped to truly appreciate the unusual image of buildings and traffic in an orange grove. Piazza Barberini was built in 1625 and named after the powerful Barberini family whose palazzo still graces this square. Its centrepiece is the magnificent Fontana del Tritone created by the famous Italian sculptor Gian Lorenzo Bernini. As we admired Triton, the son of Neptune, blowing his horn, the breeze caught the cascading water and blew it into our faces – a lovely tactile experience. Manuela had also created some tactile drawings so the VIs could envisage the fountain themselves. 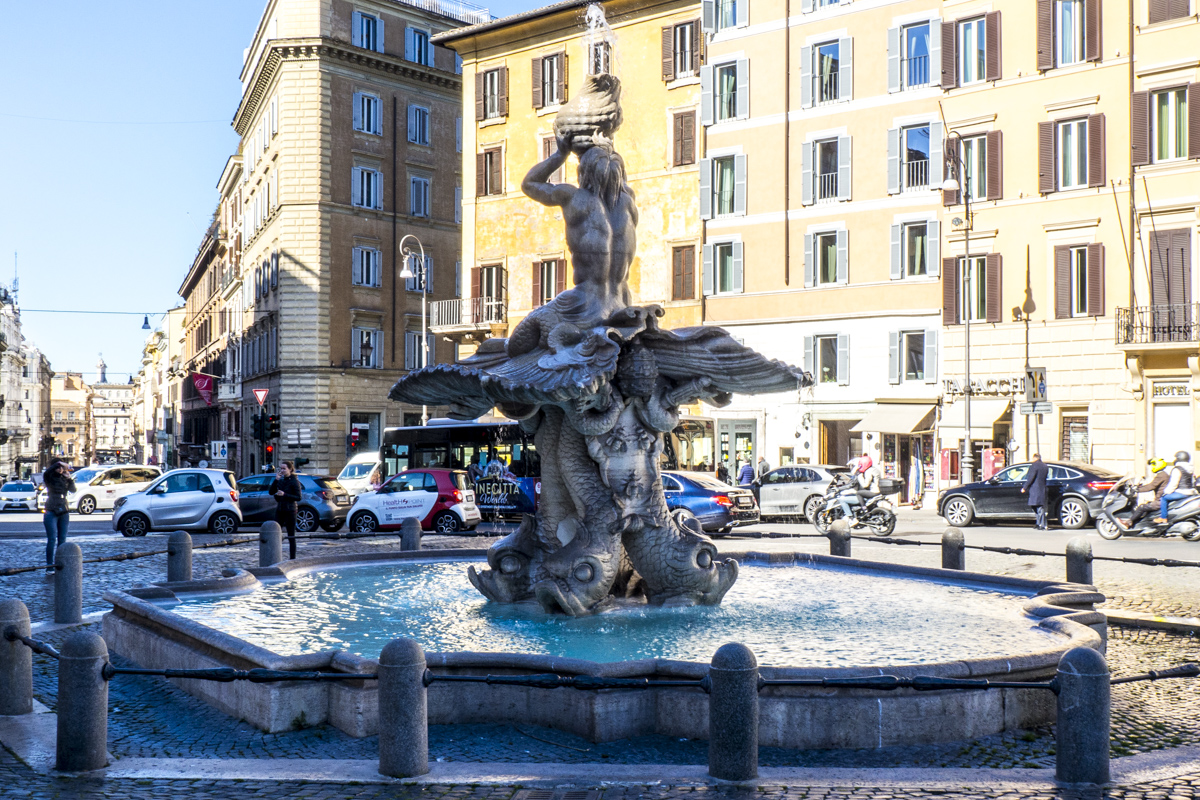 We moved on to the famous Spanish Steps. This elegant mixture of curved and straight flights of steps were built to connect the Piazza di Spagna at street level with the Piazza Trinita dei Monti above it. We arrived in Piazza Trinita dei Monti above the steps. After taking some time to appreciate the two-steeple exterior of the church that dominates this square, Chiesa di Trinità dei Monti and the panorama below us we walked down the steps. At the bottom of the steps is another Bernini creation, Fontana della Barcaccia (Fountain of the ugly boat). It was designed by Pietro Bernini, father of Gian Lorenzo Bernini and both of them worked on it until it was completed in 1627. As is common in many Italian cities, the water that gushes out of this fountain is drinkable and we took the opportunity to fill up our water bottles here. 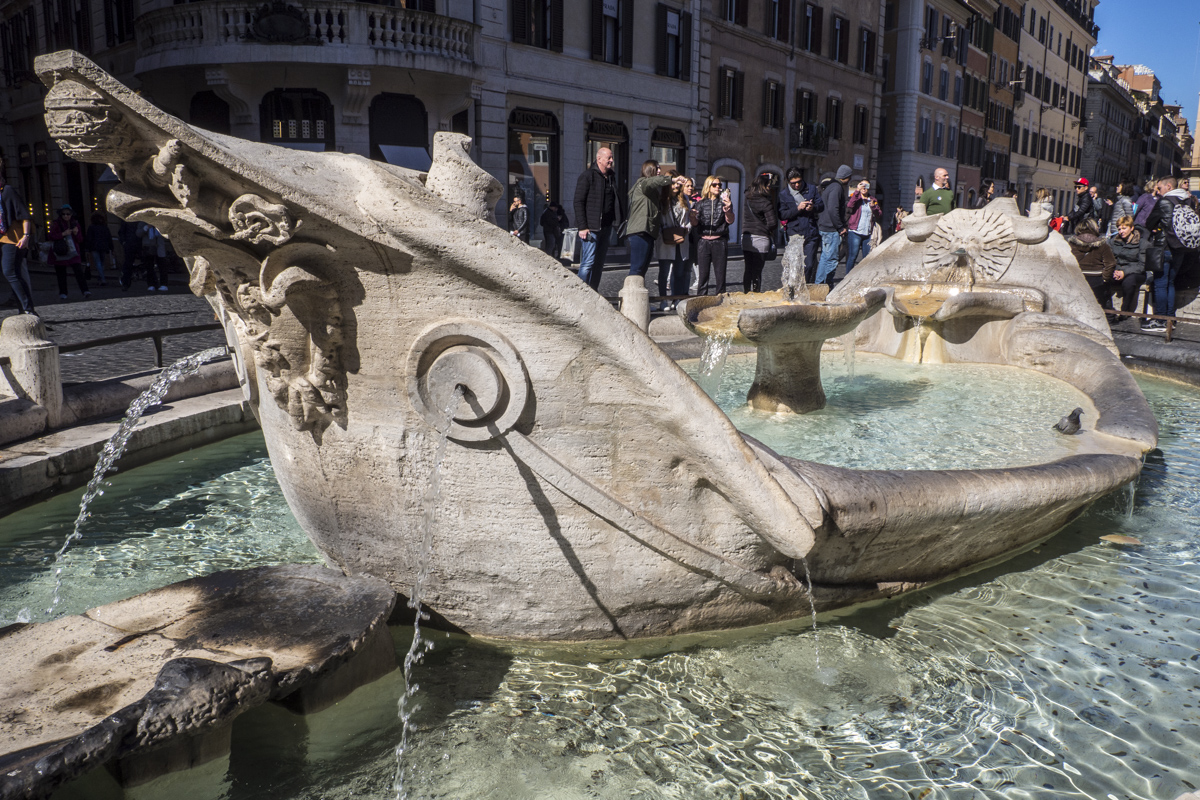 Navigating the narrow, cobbled side streets of Rome we moved on to its most famous fountain, Trevi Fountain. This massive fountain stands at the place where the water of an ancient Roman aqueduct, dating back to 19 BC, gushes out into the basin in front of it. The early Renaissance was the start of a programme initiated by the popes of restoration and elaborate decoration of the ends of the aqueducts in Rome. The restoration and decoration of the Trevi fountain was subject to changes and setback but finally, in 1762 the carved marble composition of Ocean’s Triumph was officially completed and the new Trevi Fountain was inaugurated. We were given time to explore and push our way through the crowds to dip our fingers in the water. As we left we stopped at the side and the VIs had an opportunity to run their fingers over the structure. It was lovely to see the smiles spreading over their faces as they touched probably the most famous monument in Rome. 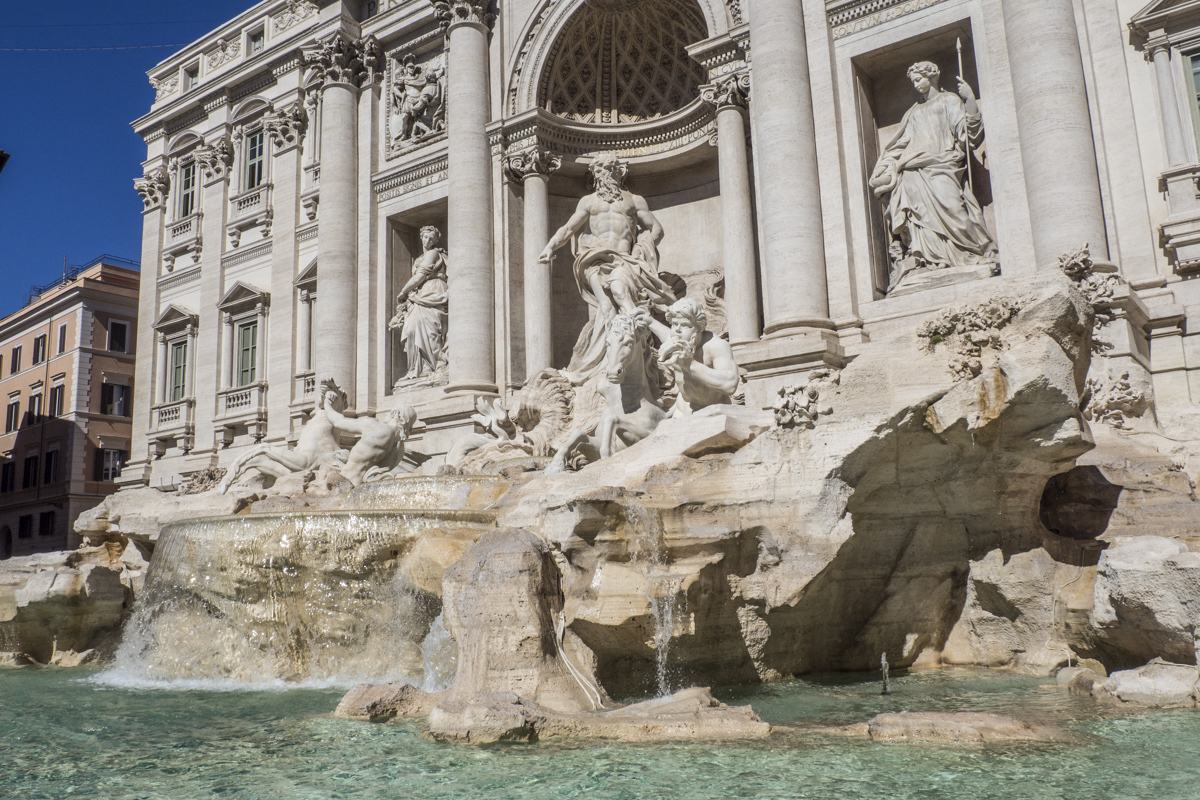 The Trevi Fountain in Rome

We strolled through the Galleria Alberto Sordi, a shrine to commerce, stopping to admire the fabulous Art Deco ceiling. We emerged from the galleria in Piazza Colonna home to another famous memorial, the column of Marcus Aurelius. This huge, intricately decorated column, was built between 176 and 192 in honour of the Emperor Marcus Aurelius to celebrate the victory of the Marcomannic Wars. After craning our necks to appreciate the incredible workmanship on this column and wracking our brains to find the right words to do it justice we moved on to Piazza de Pietra and the most unusual sight of a large building one side of which is formed by the columns of the second century Temple of Hadrian. Of the original Temple of Hadrian, only one row of eleven columns is still visible forms part of the seventeenth-century stock exchange building. This building retains its original purpose to this day. These columns were easily accessible to touch and feel the workmanship that has survived intact for nineteen centuries. 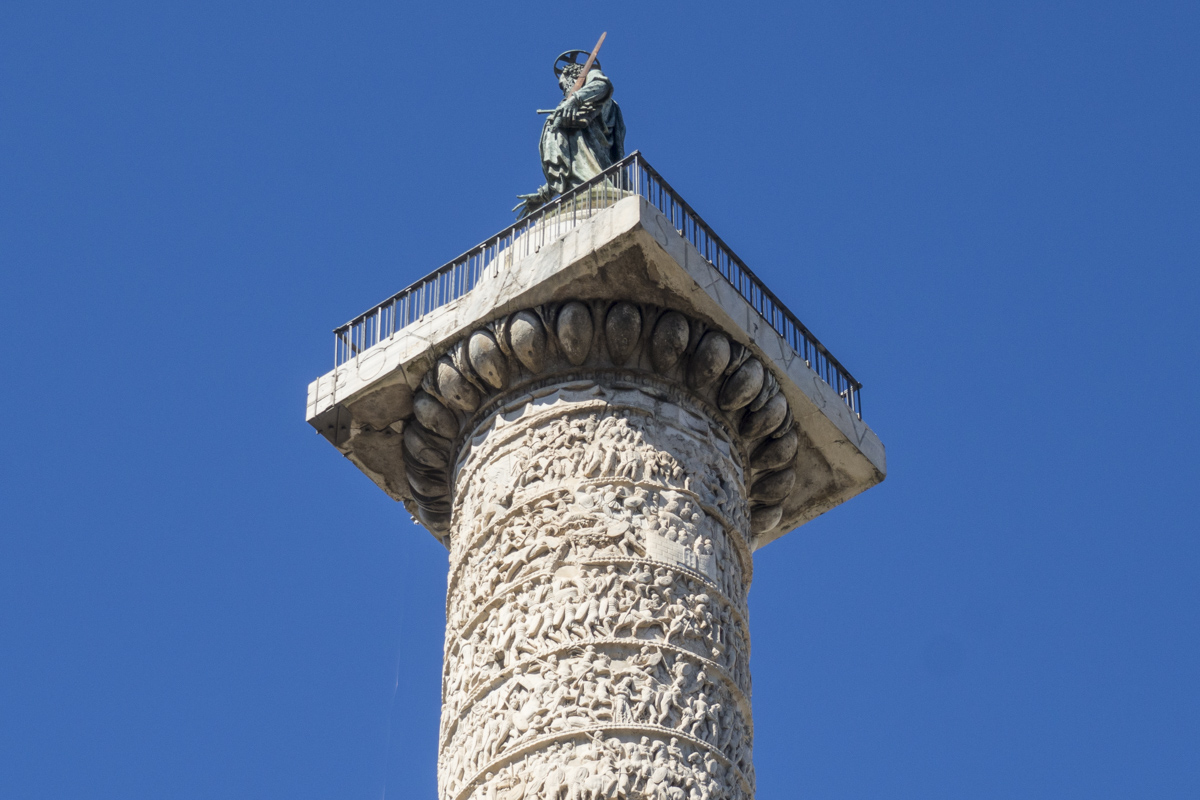 The column of Marcus Aurelius in Piazza Colonna, Rome

I never tire of my first glimpse of the Pantheon as I enter Piazza della Rotonda and trying to find the right words to describe this mammoth building topped by an enormous gravity-defying dome made me appreciate it even more. This dome, enhanced by a halo of sunlight, is the largest unreinforced concrete dome in the world and the Pantheon is one of the best preserved of all the buildings bequeathed to us by the Ancient Romans. As we entered the building that was originally dedicated to all the gods in ancient Rome we were able to touch the columns that line the entrance and feel the thickness of its huge double bronze doors that take the combined strength of four men to open and close each one. In 609 this pagan building was Christianized and today the Pantheon Basilica is dedicated to St. Mary and Martyrs. 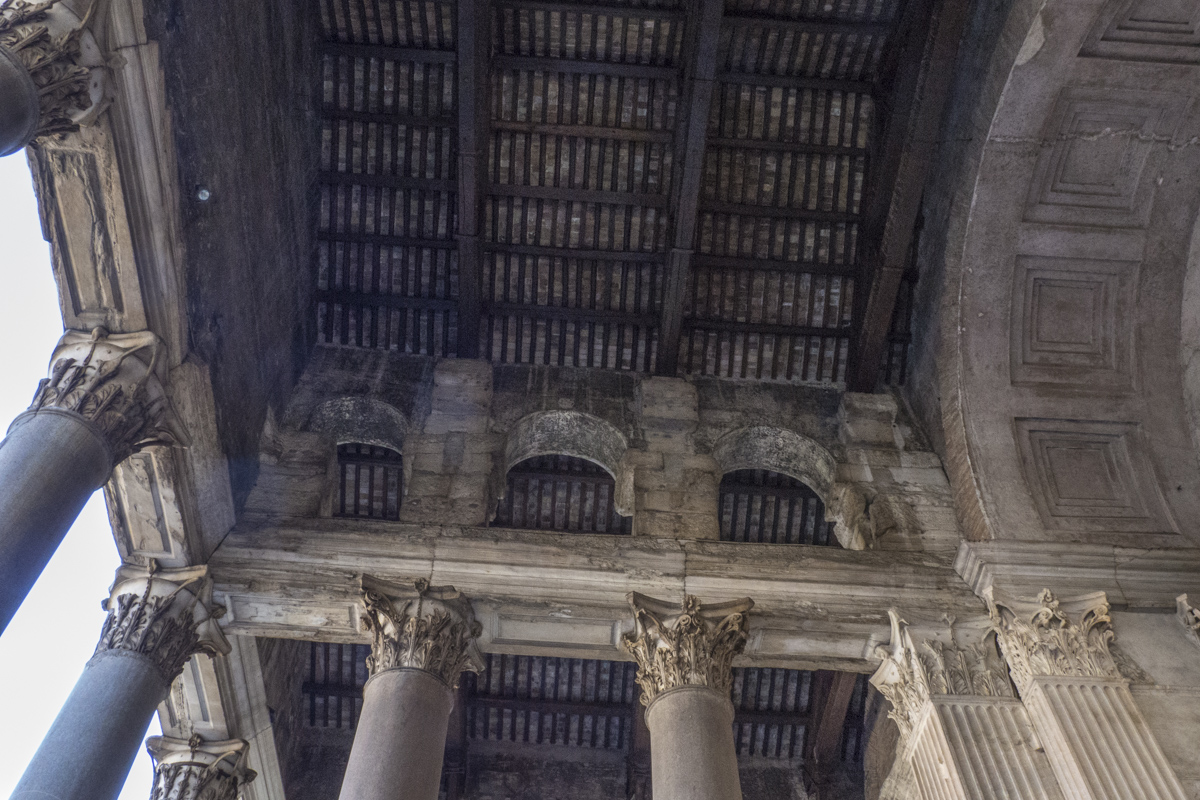 Entering the Pantheon in Rome

Our tour ended in Piazza Navona. This fifteenth century, the Baroque-style piazza really comes to life in the evenings when local artists set up their stalls and street artists entertain its many visitors. During the day there is plenty of room to appreciate its wonderful fountains. These include the Fontana dei Quattro Fiumi (Fountain of Four Rivers) designed by Bernini in 1651. Four statues represent the most important rivers of the Christian continents – the Nile, the Danube, the Ganges and the Rio de la Plata. Although the piazza is surrounded by restaurants they are very expensive and we only had to walk a short distance to find a small café serving home-made food for a relaxing lunch. After lunch we did as the Romans do – promenaded slowly back to our hotel enjoying the ambience and a delicious ice-cream. 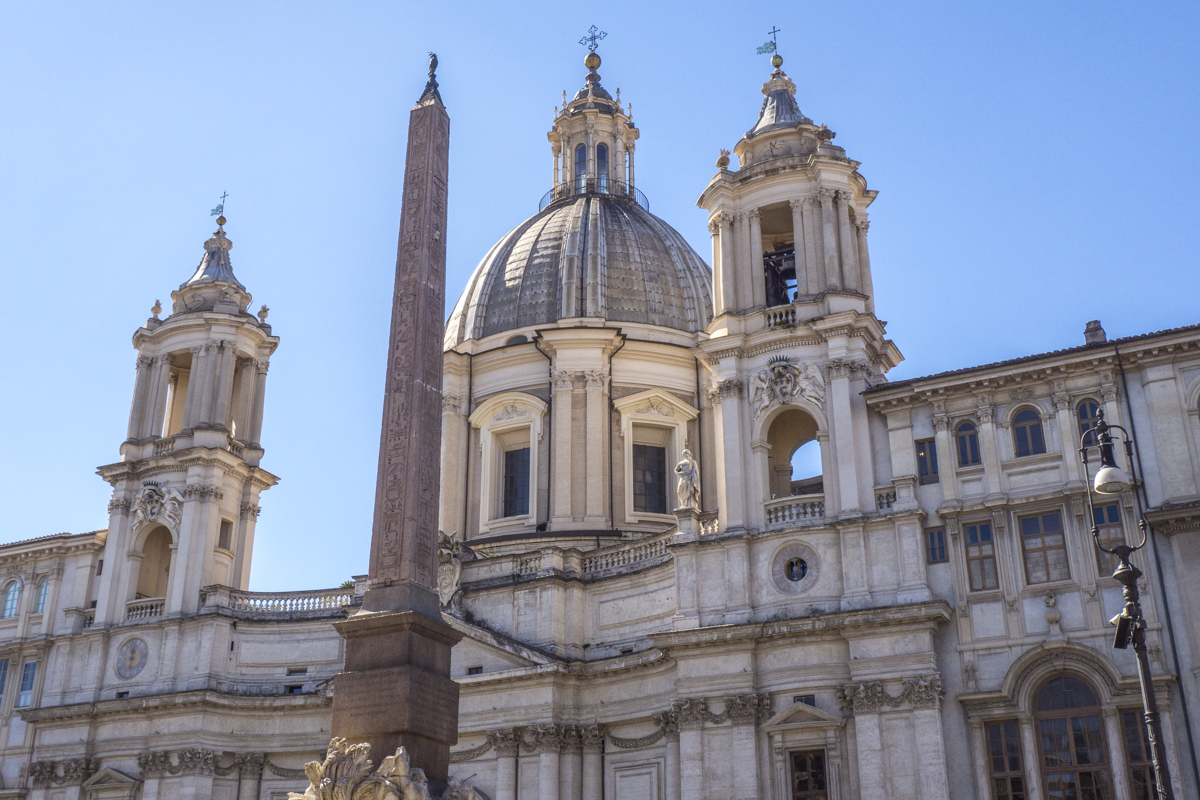 The Sky Line of Piazza Navona in Rome

This article was based on the personal experience of Valery, an ExperiencedTraveller. During this trip we only had time to explore a small area of this wonderful city – for more ideas see 35 Things to do in Rome