Easter on Parade in Sorrento – an Exceptional Experience

As the supermarket shelves fill up with chocolate eggs and hot cross buns my thoughts turn to Easter and how to celebrate this year. I am sure I will never find a better destination to celebrate this religious festival than Sorrento in Italy. Here the whole town and its visitors are consumed by passionate enactments 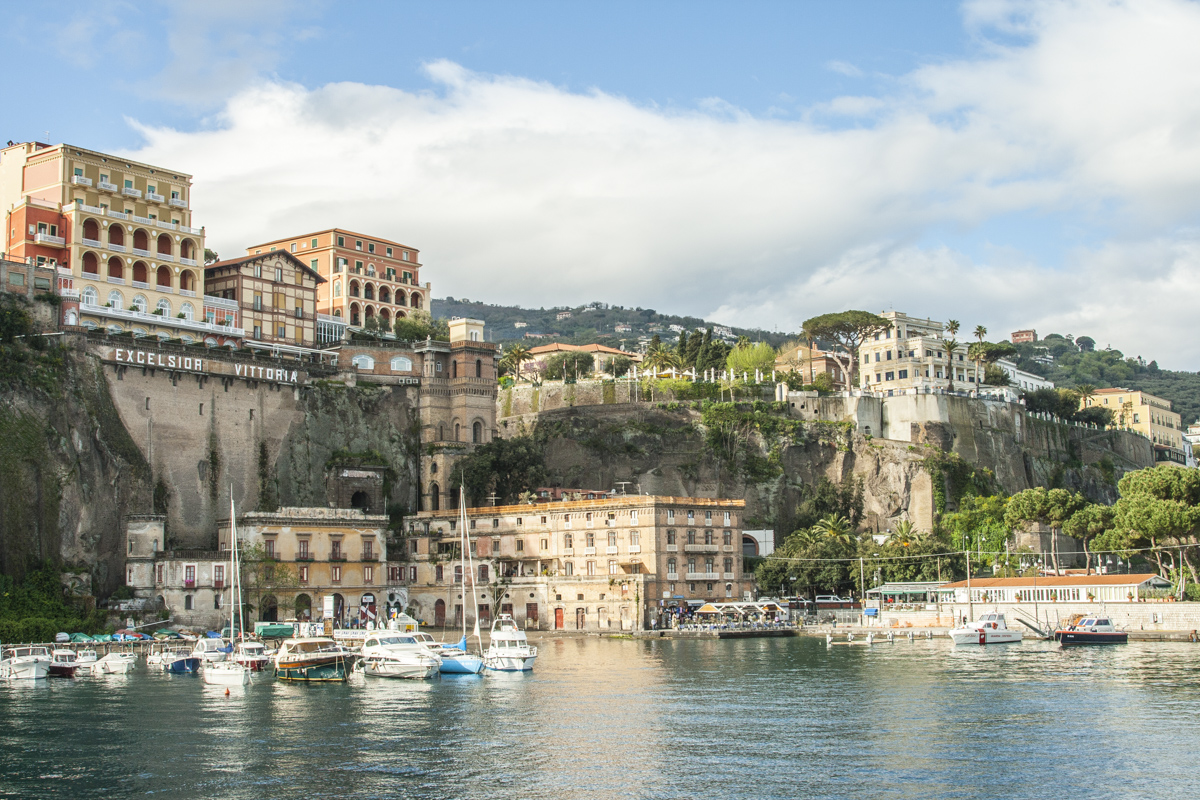 Palm Sunday, La Domenica delle Palme as it is called in Italy is the beginning of Holy Week (Settimana Santa). The start of a fascinating mixture of serious religious celebrations and holiday happiness. The churches will be decorated for this occasion. In Sorrento on the Amalfi Coast of Italy, olive branches often feature in these decorations instead of palms. As a prelude to the parades that will take place all the churches on the route, complete with their decorations, are open for a ‘walk around the sepulchres’. The route for this walk is available from the Tourist Information Office and will also be posted on the churches involved. The best time to visit these churches is the day before Good Friday when the churches are ready for the White Parade. 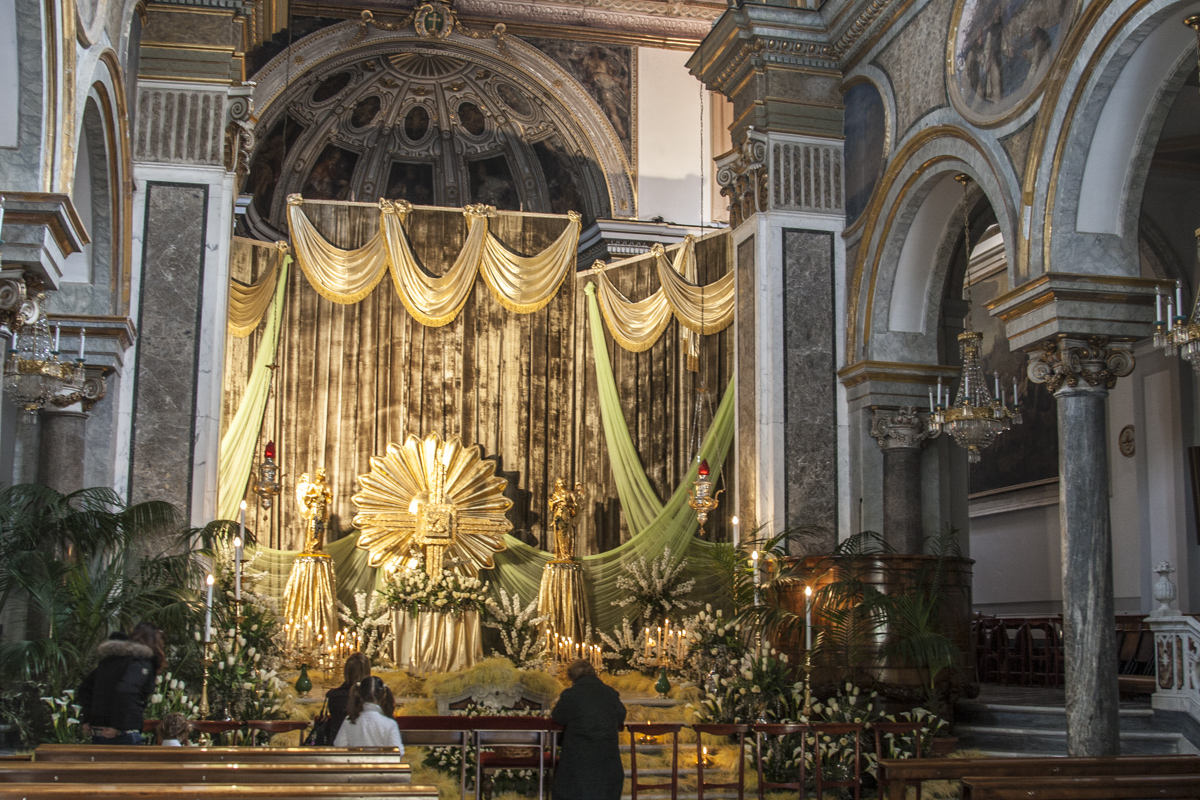 Easter decorations in the Basilica of Saint Antonino in Sorrento, Italy

The White Parade in Sorrento

The White Parade is the first of two parades that takes place during the early hours of Good Friday (Venerdi Santo). Hundreds of Sorrentini (inhabitants of Sorrento) take part in this, the first of two very special Easter parades. The White Parade starts at three in the morning of Good Friday. The streets are deserted but the route is lined with flickering candlelit lamps and ghostly figures can be seen gliding through the back streets. A band accompanies this first parade and the sound of calm, uplifting music precedes the vision of white cloaked and hooded figures, each carrying a flaming torch, that fills the streets. 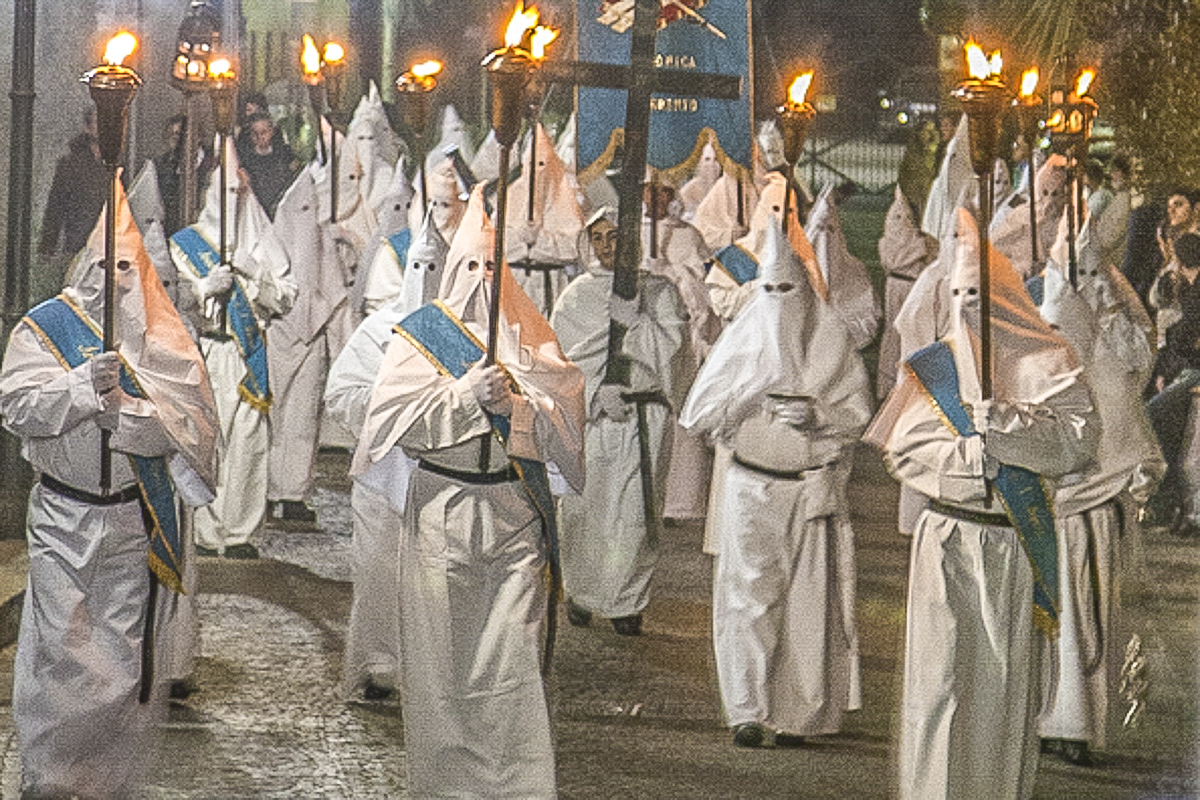 The White Parade in Sorrento, Italy

This is a procession of hope and the processors carry an image of the Virgin Mary who is searching for her son Jesus. The whole procession halts in the front of each church on its route and Mary is taken inside to see if her son is there. Outside the hooded figures wait in silence, there is no breaking of ranks and not a word is spoken – just a street full of robed figures waiting and hoping. The whole experience was surreal and the next morning, while strolling through the crowded streets of Sorrento, I wondered if it really happened or if I dreamt it. Burnt out candles still littering walls and pavements confirm it really did happen. 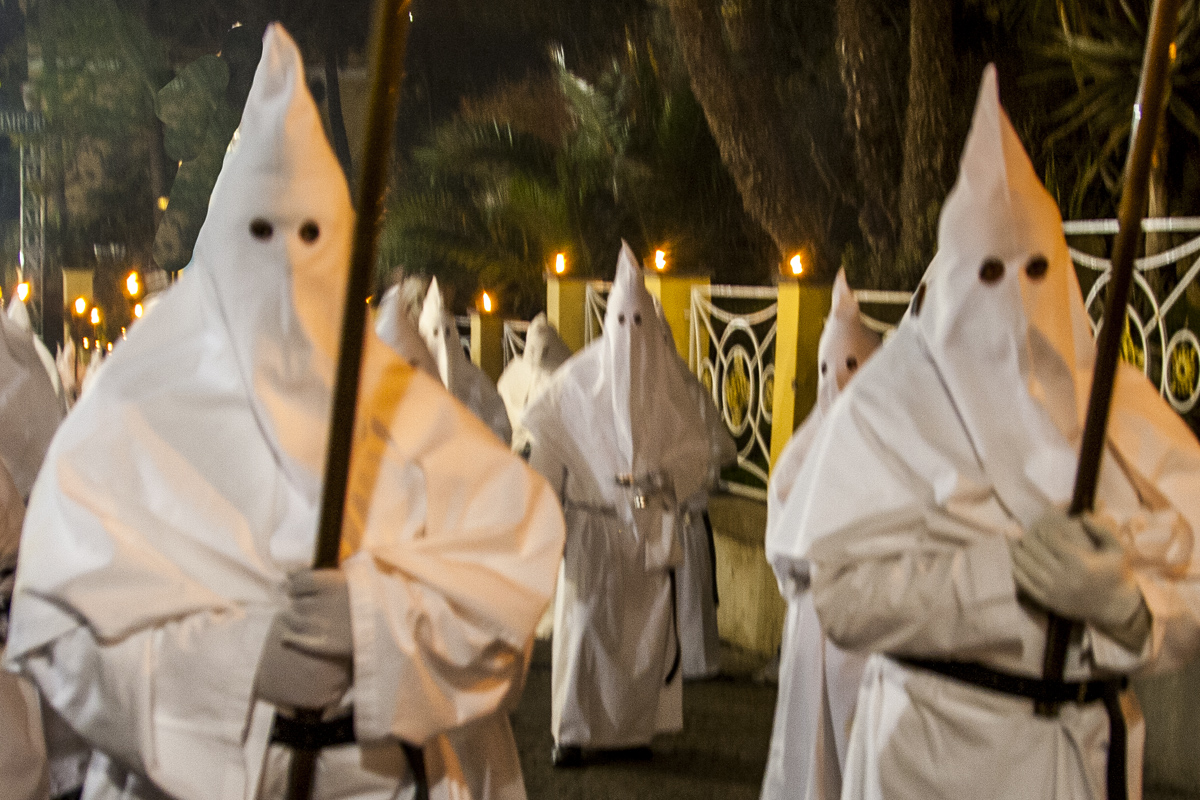 The White Parade in Sorrento, Italy

Between the Parades in Sorrento

Throughout the day of Good Friday crowds will be pouring into the town and traffic will probably be prohibited in the centre as the town fills up. The main attraction is the second parade, the Black Parade or the much more sombre Procession of Death. But, as Good Friday is not a public holiday in Italy it is also a chance to explore the town of Sorrento and do some shopping. A popular purchase is limonoro, made from locally grown lemons. This lemon liqueur is slightly darker in colour than the more widely known limoncello that is also produced in this region. Only lemons harvested fresh in the morning are used for the simple and traditional old recipe that uses the fresh peel soaked in alcohol. It is served ice-cold and makes an excellent after dinner drink. Sorrento is also famous for its marquetry and the narrow streets feature specialist shops filled with beautiful examples of this craft. This inlay technique originated in Siena during the eleventh century when it was used to decorate church furniture and panels. The Romans were the first to use veneers of more attractive woods to cover the plainer varieties – an economically inspired technique as it made one tree go further. Today the town of Sorrento is the centre of a thriving marquetry industry. Since the early nineteenth century its highly skilled practitioners have created a vast range of inlayed and marquetry work known as Sorrento Ware. 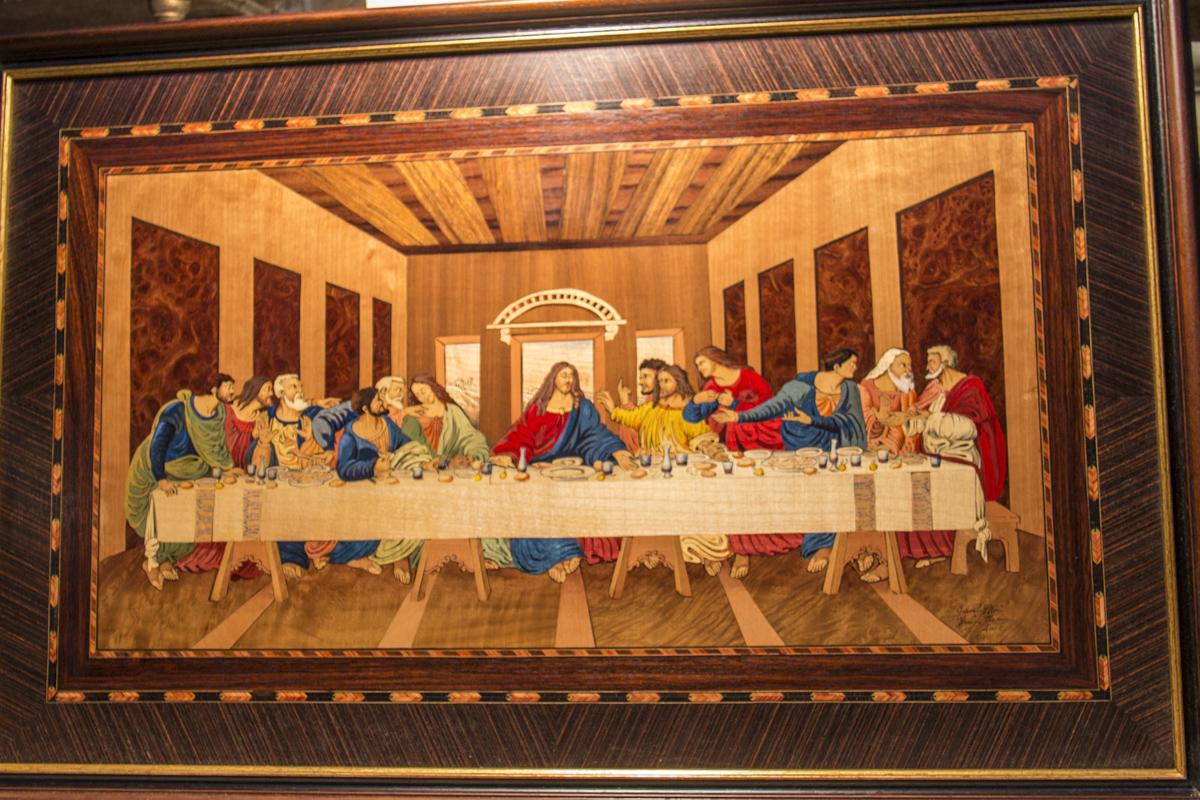 An example of Sorrento Ware in Sorrento, Italy

The Black Parade in Sorrento

By the start of the Black Procession, late at night on Good Friday, the streets are solid with people but I had anticipated this and had been sitting on top of the wall surrounding my hotel for the past two hours. Although I found the Black Procession very interesting I did feel it verges on the macabre. Certainly the effigy of Jesus that is borne aloft is disturbingly lifelike with the cruel thorns of the crown piercing his head. He is accompanied by a grieving Virgin Mary. All hope is lost as she has found her dead son. The accompanying music is funereal and supplemented by rattling and the chanting of the Miserere. All the participants are dressed in black and many wear hoods but not all of them. It is one huge funeral procession watched by thousands of spectators. A memorable event. 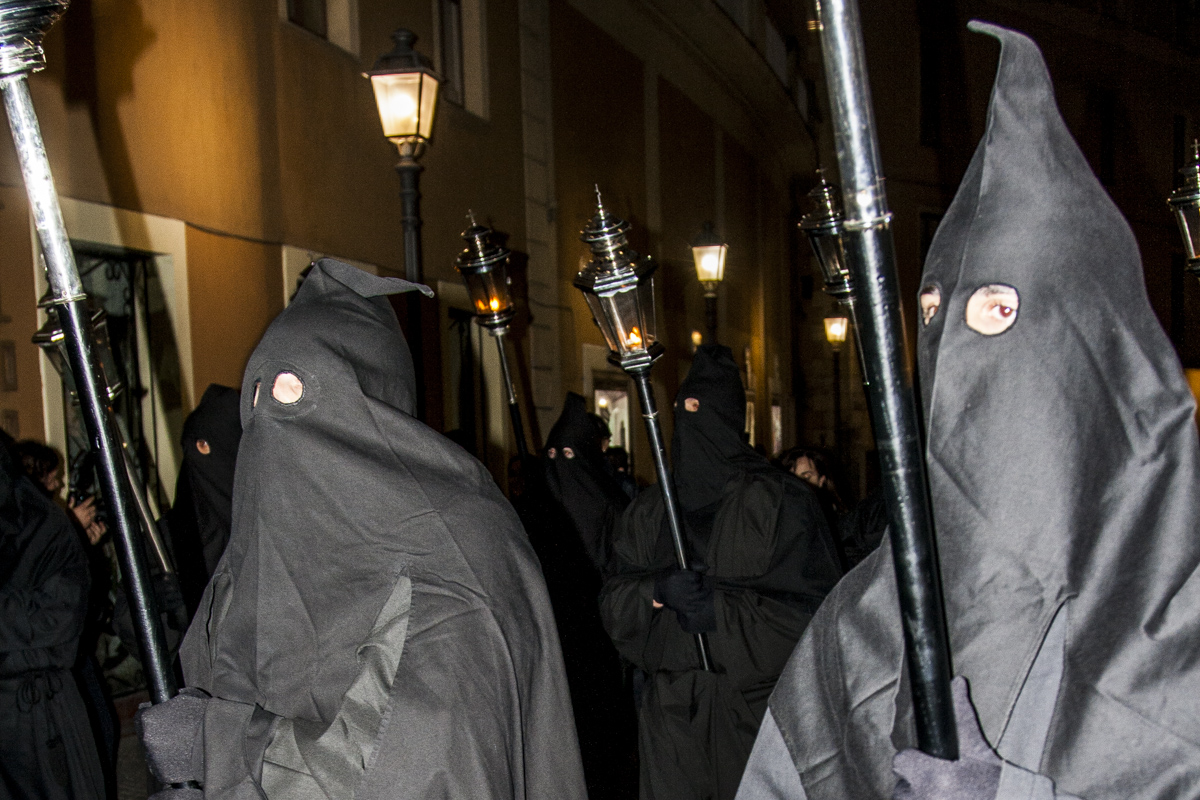 The Black Parade in Sorrento, Italy

The History of the Easter Processions in Sorrento

The roots of these processions probably go back to 1500 when they were very simple and the brothers from the monastic order (confraternity) responsible for organising them walked through the streets in plain robes with lighted lamps, singing psalms and carrying a bare wooden cross. Probably around 1700 under the domination of the Spanish viceroyalty the parades were influenced by the Jesuit priests who introduced the tradition of carrying Confraternity symbols and standards particularly in the Black Procession. By 1806 the numbers of brothers and friars in the local convents had greatly diminished so the King of Naples ‘invited’ other Sorrentini to participate in the procession. This invitation is still repeated today and many local people, in particular the young people, take pride in accepting this invitation and following a tradition that has been handed down from father to son. 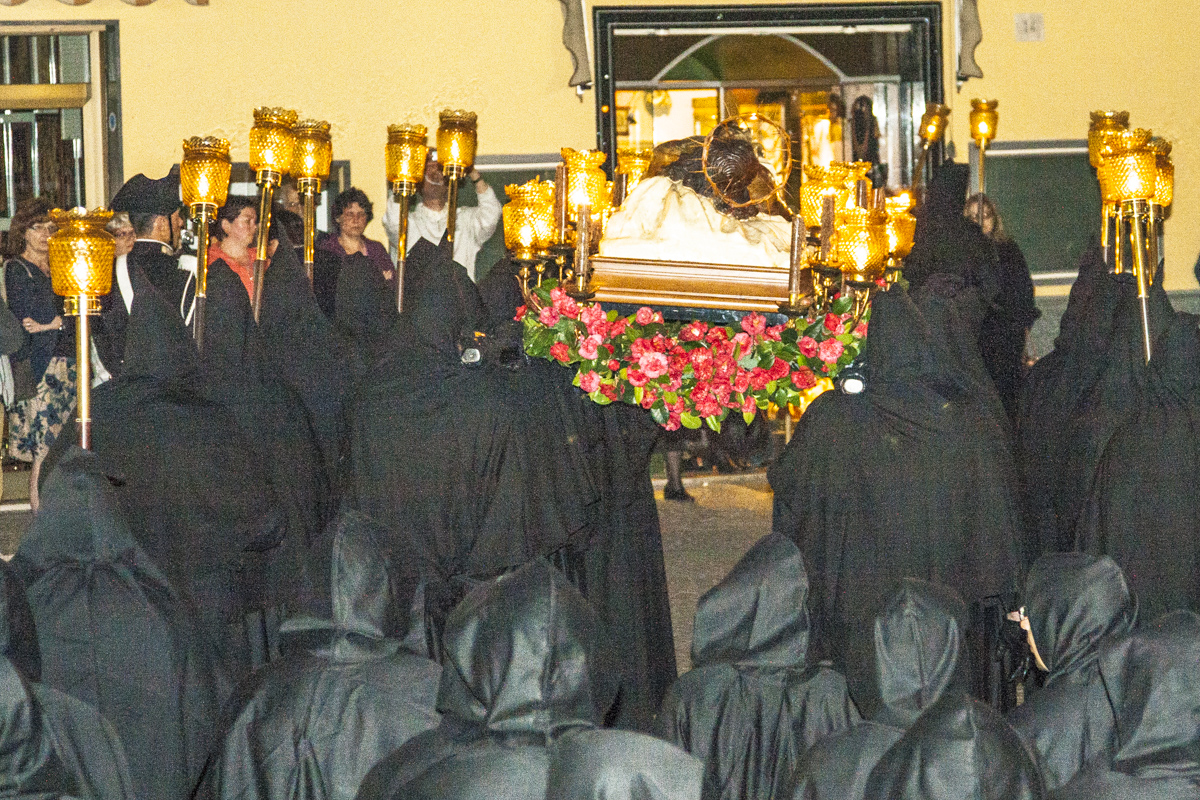 The Black Parade in Sorrento, Italy

After the Parades in Sorrento

Easter Sunday in Sorrento is a day for going out. It is considered to be the start of spring. Lunch or pranzo will be the main event of the day, either a packed lunch or a restaurant meal. For many Italians lunch or pranzo is still the main meal of the day and everything stops at noon when families meet to enjoy this leisurely affair. The meal usually starts with an antipasto, an appetiser eaten before the meal. There are numerous regional varieties of this course from cold vegetables dressed in olive oil, slices of cheese, prosciutto (ham), other meats and sometimes hot dishes such as fried vegetables and fish. Or, maybe a mixture of these, an antipasto misto (mixed appetizers) is served. The primo piatto (first course) comes next and comprises a small plate of pasta or risotto or soup. Il secondo (main course) is a small portion of meat or fish with either lightly-cooked vegetables or a salad. Cheese, which is always eaten with bread, and fresh fruit, is served at the end of the meal and finally an espresso (small strong black coffee). Mineral water and wine accompany this meal and bread is eaten throughout. Italian meals are balanced, a light course will be followed by a heavy course or vice versa and delicate flavours are never preceded by strong flavours that would overwhelm them. In Italy eating is truly an art. 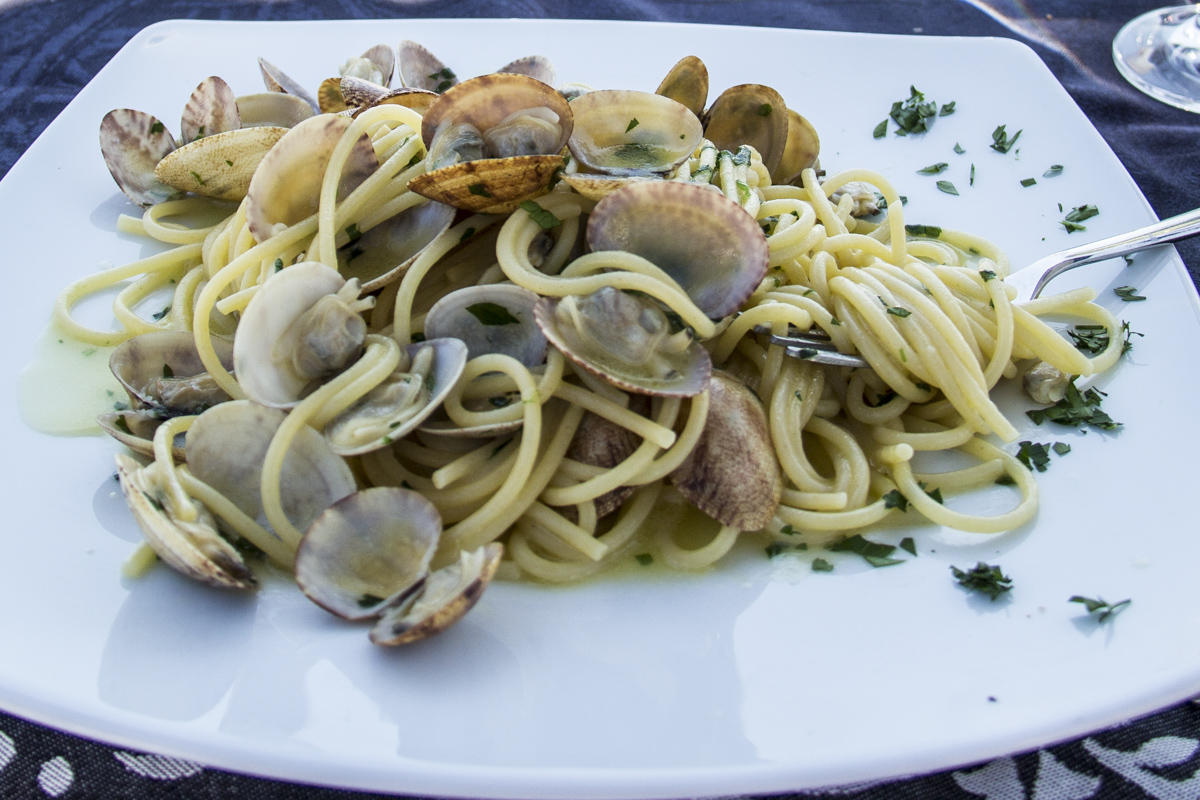 Where to Stay in Sorrento

I stayed at and can recommend the Imperial Hotel Tramontano which occupies a dramatic setting perched on the cliffs above the Gulf of Naples. An elevator links every floor to the beach below which can also be reached by walking down a footpath cut into the tufa stone cliffs of Sorrento. The oldest wing of this elegant building dates back to the sixteenth century. It was in this wing, in 1544, that the famous Italian poet Torquato Tasso was born. Throughout its history the building has played host to many important people from the literary world. Milton stayed here during his travels abroad and other notable guests include Goethe, Bryon, Scott, Shelley, Keats and Longfellow. Ibsen stayed here for six months and during that period he wrote ‘Ghosts’. This hotel is a short walk from the centre of town. 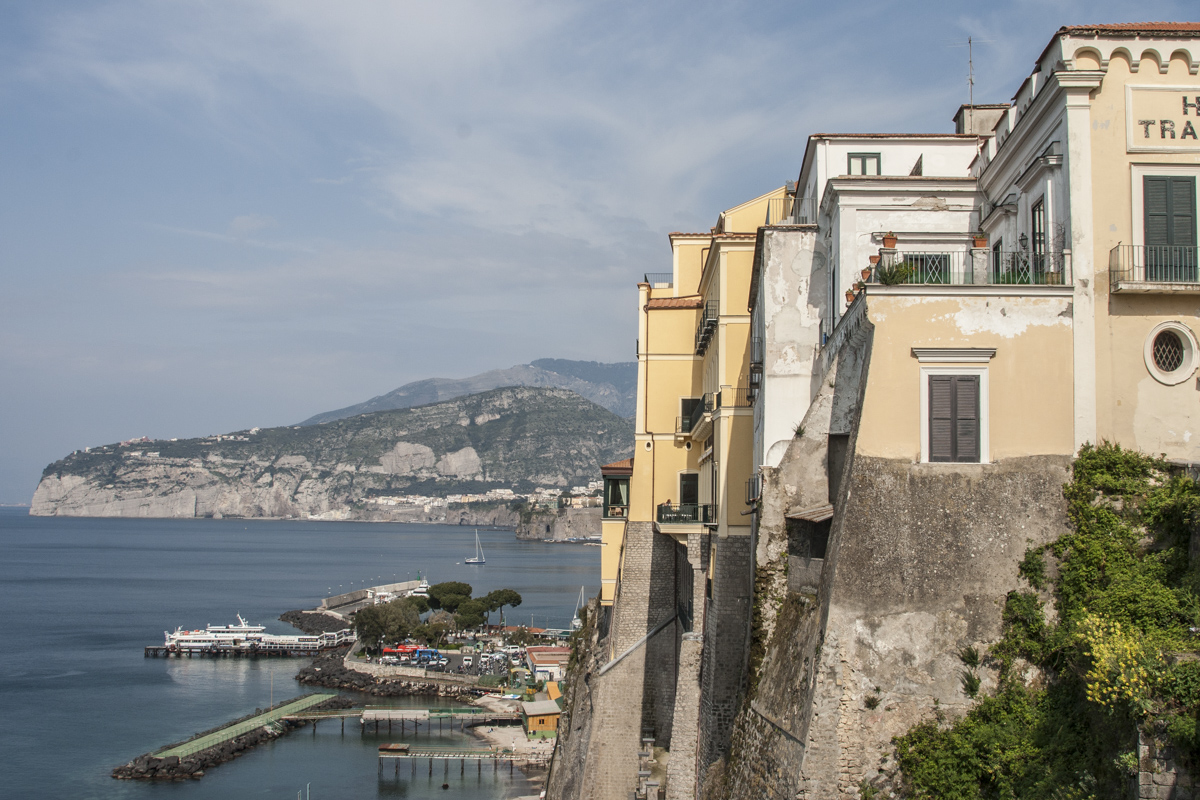 I flew to Naples with British Airways which operate regular flights to this airport. Naples Airport is linked to Sorrento by regular public transport services.