Sorrento is a favourite amongst the wide range of holidays in the Solos Holidays brochure and I was very happy to return there recently and in particular to the elegant Hotel Tramontana that clings to the cliffs on the sea side of the town. Reputedly the famous song, Torna a Surriento, was composed on the terrace of the hotel bar in a matter of hours but nowadays it is the perfect place to enjoy a cocktail at the end of the day looking out over the beautiful Bay of Naples. 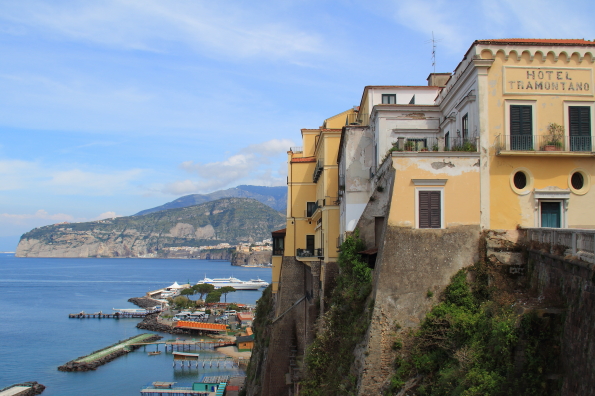 Sorrento is well-placed for excursions in the area by land and sea. Boats leave the Marina Piccola regularly for the island of Capri and Naples. During the summer months there are regular ferries along the Amalfi Coast. The main port is called Marina Piccola which means a small port yet it is larger than Marina Grande (large port) at the other end of the town. This misnomer reflects the change of fortunes of a town where fishing was once more important than tourism. The influx of tourists has resulted in an abundance of lemon products including limoncello, chocolates and soaps made from the famous Sorrento lemons that grow on the many family smallholdings on the terraces along the coastline. 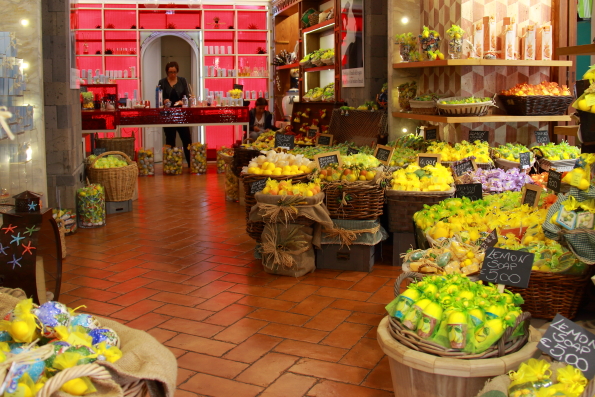 During our walking tour with our guide Giovanna we learnt a lot about the town perched on the Sorrento Peninsula so named to avoid confusion with the Bay of Naples and the Bay of Salerno on the same coastline. After visiting the main square, Piazza Tasso, named for the poet Torquato Tasso who was born in Sorrento, we wandered along the main shopping street in the old town, Via San Cesareo, to the cathedral. Here we learnt about the many important religious parades that take place in and round Sorrento, particularly at Easter. But maybe most important of all we were introduced to the best gelateria in Sorrento – Gelateria David.
We were all excited when we set sail on the hydro foil to the beautiful island of Capri once a favourite destination of Caesar Augustus and his successors who between them built twelve villas there but today only the fortified walls of an ancient Greek acropolis still survive as testimony to their presence. With few natural resources and a population decimated by pirate raids, plagues and rivalry between the island’s two Communes, Capri and Anacapri the island finally came into its own when it embraced the romanticism of the Nineteenth Century. During this time the island’s magical solitude and rustic simplicity first began to attract visitors including foreign artists, writers and poets. After the Russian-Japanese war of 1905 and the great exodus of Russian intellectuals Capri really established itself as a literary and political refuge and its famous inhabitants included the Swede Axel Munthe whose home, the Villa San Michele, is well worth a visit. 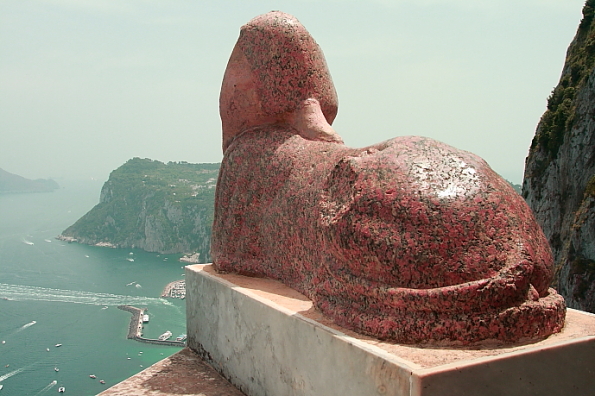 Off the beaten track is the best way to experience the true beauty of Capri and we began our visit by racing down its narrow winding lanes towards the sea and the Blue Grotto. It was total chaos when we arrived and joined the queue that stretched up the steps almost back to the car park. Small rowing boats collected passengers from the bottom of the steps but also from a flotilla of boats that was bobbing in the bay. Somehow order was fashioned out of this confusion and we were soon aboard one of the boats and after rowing to a floating ticket office to pay our entrance fee we joined the line of boats milling round the entrance of the cave waiting for the right moment to shoot into the cave. Passengers were told to lie flat in the boat to avoid the overhanging rocks. When the boatman said we could sit up it was fantastic and definitely blue. Several boats were already inside and we all circled the cavern while the boatmen sang Oh Sole Mio. It was a great experience. 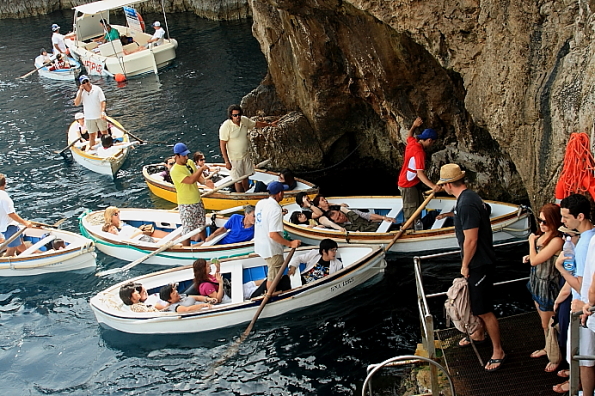 Back on dry land we drove up to Anacapri where we explored the shops dodging free squirts of perfume and resisting the temptation to pay a fortune for custom made leather flip flops. Some of us braved the single chair lift that took us to the top of Monte Solaro. The journey was as interesting as the destination as we rose above a patchwork of cultivated terraces before arriving at the viewpoint where both sides of the island are visible. After lunch we went to the town of Capri where we promenaded in the main square, the Piazzetta, marvelled at the views from its terrace and explored the warren of narrow cobbled streets home to exclusive boutiques and boutique hotels. As the ferries filled up and left the island in peace for the evening I thought how nice it would have been to have stayed there overnight. 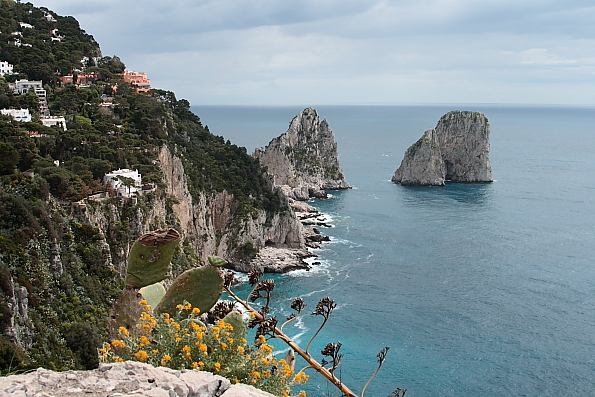 Our coach tour along the spectacular Amalfi coast was not only memorable for the scenery but also for a few narrow scrapes as vehicles of all sizes vied for position on the narrow hair pin bends. Cliffs plunge straight down into the sea below us and we had regular glimpses of the many narrow sets of stone steps that form the only means of access to the houses above and below the road. After stopping to admire the pretty town of Positano creeping down the hillside to the sea we arrived in Amalfi once the centre of a great sea-faring republic and now a favourite destination for tourists visiting the area. Its most famous monument is the cathedral which we visited before having some free time to explore the shops and in particular the hand-made-paper shop a tradition of the town. 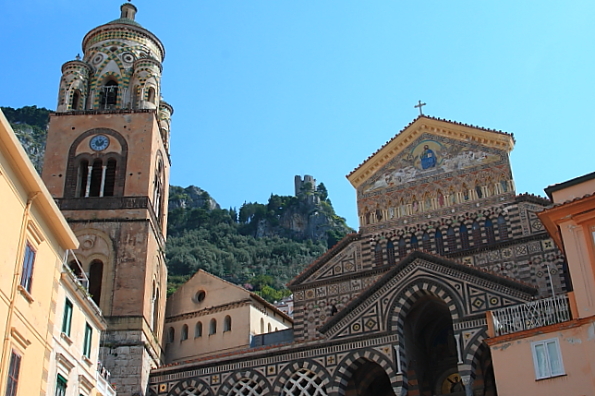 Despite having visited Pompeii regularly for the past fifteen years I was looking forward to our visit and was delighted to find that our guide was my favourite, the droll Pasqual. Every time I visit Pompeii I am once more impressed with the size of the excavations and I always learn something new about the way of life during that period. Our tour took us through the lupinare where prostitutes plied their trade and was so called because they had to stay out of the town centre and attracted custom by baying like wolves. When our tour was over we had time to explore the many souvenir stalls outside the excavations or sit in the shade savouring a cold drink and discussing the ruins. I recommended reading the novel Pompeii by Robert Harris which brings this era to life and diffuses the mystery of why people ran towards the eruption rather than away from it. 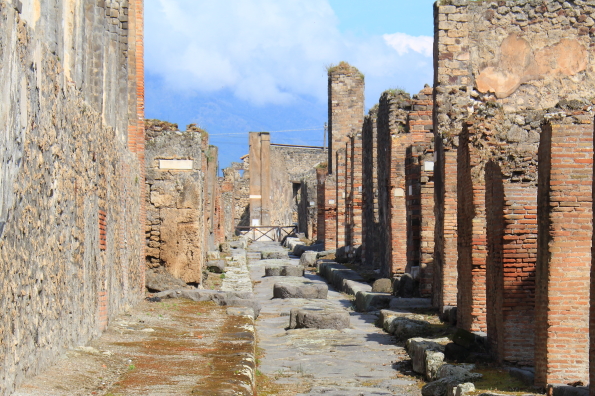 A visit to Herculaneum was a good opportunity to compare the smaller site of this residential town with the sprawling remains of the large commercial centre that was Pompeii. Our guide was Pepe and he brought the ruins to life for us as he explained the architecture and the way of life. We were all pleased that it was no longer necessary to use the urine of twenty slaves to get your whites white. We did not have time to linger as we were climbing up Vesuvius that afternoon. It was a clear day and we were looking forward to enjoying the views of Naples from the top but first our bus had to wind our way up the volcano to the car park where our walk would start. 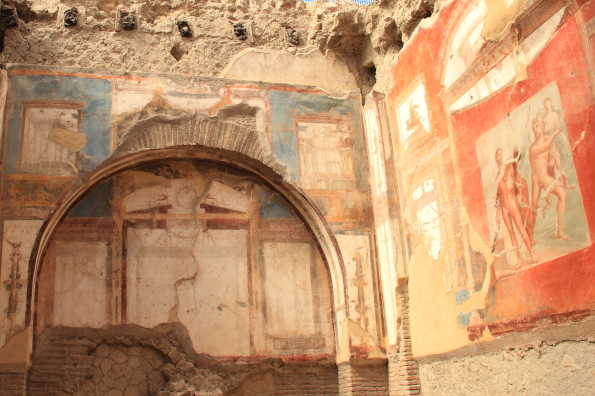 The winding path to the crater is very well-constructed and the only real discomfort comes from the tiny pieces of lava that wriggle their way into the sandals of visitors who have not been advised to wear covered shoes. It was exciting being so close to one of nature’s most powerful phenomena. When we arrived at the edge of the crater we met our guide (included in the entrance fee) who talked to us about the volcano. Although it has not erupted since 1944 Vesuvius is still considered active and we could see the fumeroles where the steam is escaping from inside. 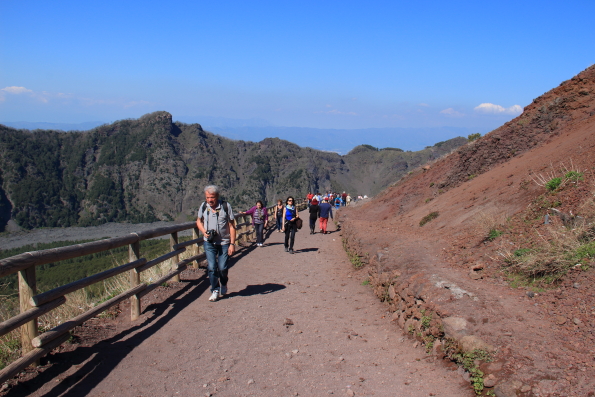 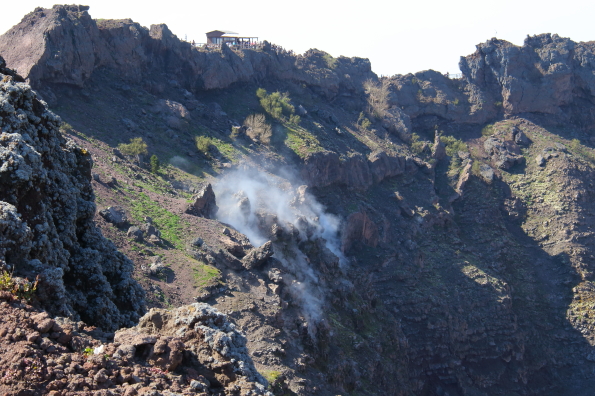 Our sojourn in Sorrento was over before we had time to get a local bus to Positano to explore the narrow cobbled streets lined with fashion shops that wind their way down to the sea. Above Amalfi is the captivating village of Ravello famous for its two fabulous Roman Villas, its gardens and its concerts. But I knew that I would go back to Sorrento. 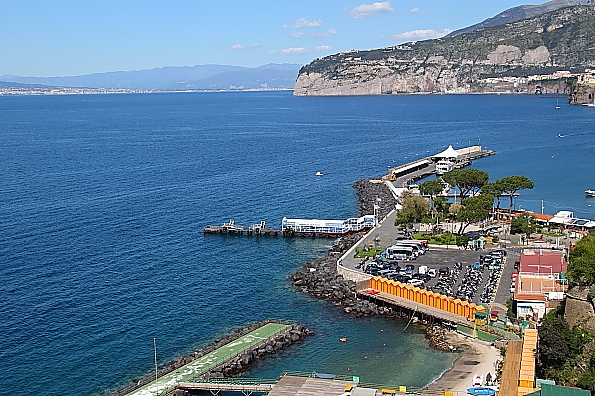