A Portrait of Pom - our guide in Luang Prabang, Laos

Luang Prabang may no longer be the Royal Capital of Laos but it is still considered the main centre of Buddhism in Laos. I was delighted when I met our guide, Khampom hitherto known as Pom, to discover that he had been a Buddhist monk for fourteen years. He has a serenity and a joy about him that is very endearing. 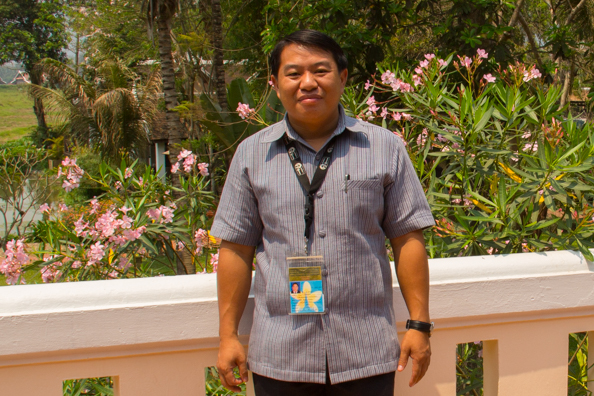 Traditionally all Laotian men were expected to spend some time as monk or a novice before getting married. The numbers are decreasing now even though being ordained as a monk brings honour to his family. Ordination requires compliance with 227 rules of the monastic order for those over twenty years of age and seventy-five rules for those below that age. There are no rules regarding the length of time a monk must serve in his religious order – it may be a few weeks or a lifetime. Only a few women become Buddhist nuns and they do not lead religious ceremonies as the monks do. Monks preside over religious ceremonies, festivals, domestic rituals and funerals. They have no possessions and rely on the generosity of the local people for food and clothing. Pom invited us to take part in the almsgiving ceremony that takes place at dawn every morning. As it meant a very early start only a select few accepted the invitation and we were very glad we did. 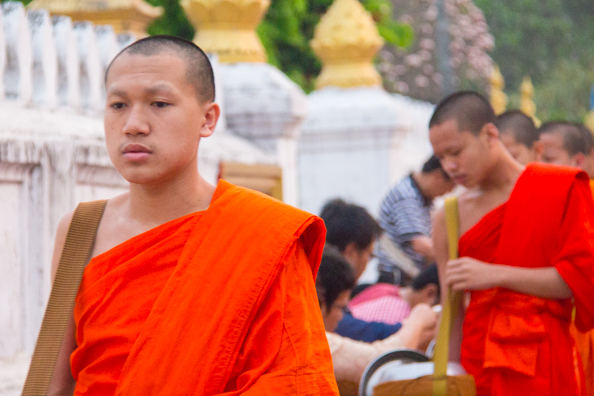 I was concerned by the number of guests milling around reception when I stumbled sleepily into the room. Was this going to be a tourist-driven event? My fears proved to be ungrounded as there are so many monasteries around the town that the tourists were spread very thinly on the ground and also under strict instructions to obey the rules of this ceremony. Pom provided our offerings – some sticky rice in a specially designed raffia container and a bowl of snack bars. We had to remove our shoes, put a sash across one shoulder and then sit demurely on a very low stool that had been placed on a strip of carpet. We were not to make eye contact with the monks, do nothing to delay their progress and never follow them after they had passed by. Visitors who were not partaking in the ceremony were encouraged to keep their distance at all times. It was all over very quickly. A line of monks wearing bright orange robes and bearing their alms baskets over one shoulder marched past us in a line. They lifted the lid of their basket as they passed by inviting the donation of a handful of sticky rice or a snack bar. The rice was definitely sticky and the grains had all stuck together making it really hard to grab a handful – some of the monks gave up, dropped the lid of their basket and moved on. Nothing was allowed to impede their progress. We were positioned close to Wat Sene Souk Haram, where Pom had once been a monk. It is also known as the temple of one hundred thousand treasures and reputedly one of the most beautiful temples in Luang Prabang. It was built in 1718 using one hundred thousand stones from the Mekong River and the buildings within the complex include a drum shelter and a pirogue (dugout canoe) shelter. housing a beautiful racing pirogue. It was the first monastery here to have its main building covered with yellow and red tiles in the modern Thai fashion. 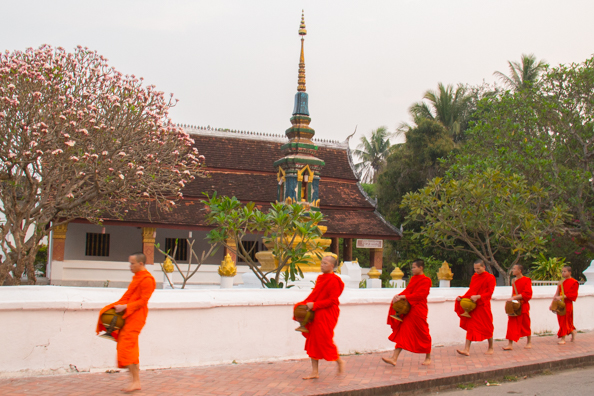 When we emerged from the temple we walked through the now deserted streets to the morning market. Pom was talking enthusiastically about the silly money. As I listened and puzzled about this phrase it suddenly became clear that he was saying ceremony. I was glad the penny had not dropped during the silly money itself and I had broken the rule of silence. As we approached the morning market we could smell the corn sizzling on small barbecues. Pom told us that the Lao like their food fresh but some of it was still alive. Small frogs squirmed as they were being speared on wooden sticks, tiny shrimps wriggled in large containers and live fish thrashed their tails in buckets of water. This is where the locals shop daily for their food and there were only a few souvenir stalls at the far end of the street. Just before we reached the end of this street we passed the fresh meat stalls – never have I seen such vibrant cuts of meat. 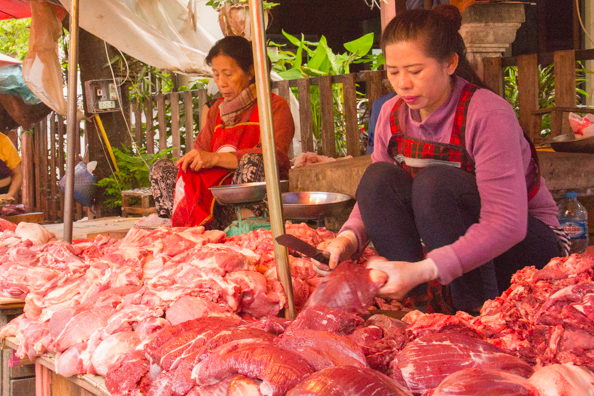 Luang Prabang has many temples and who better to show us around some of them than an ex-monk? And where better to start than the oldest temple, Wat Visounarth. The word Wat in Lao means temple and the main building of a temple, which generally has several buildings in a complex is the sim. The sim houses the statues of Buddha. Most temples also feature accommodation for the monks associated with it. This was built by King Wisunarat and dates back to 1513. The original wooden building was burnt down in the 1880s by the Black Haw riders part of the Chinese Black Flag army intent on ransacking Laos. When it was rebuilt some of the original parts were incorporated into the structure. This temple, a celebration of early Lao architecture has been restored twice in 1895 and 1932. It is home to a small selection of gilded statues of Buddha and some ancient stones but it’s most unique feature is the unusually shaped stupa. It was designed by the wife of King Wisunarat to represent a lotus flower but it is known by the locals as the watermelon stupa. 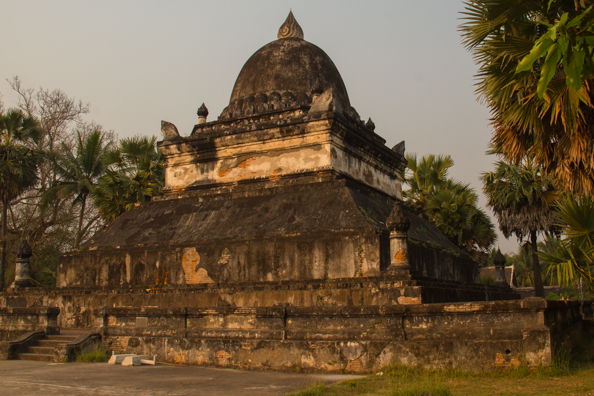 We moved on to Wat Aham Qutama Thang a Buddhist temple with a history of both Buddhist and spirit worshipping. It was built in 1818 on the site of a sixteenth century temple. Between the street and the temple are two large, old banyan trees that harbour the Devata Luang, the guardian spirits of the town. According to legend there was a shrine on the site of the temple that had been built for these two guardian spirits, Pu No and Na No. Nearly two centuries later, King Phothisarath, a devout Buddhist dedicated to ending spirit worship, destroyed these shrines and built a temple. Subsequently the town of Luang Prabang was hit by several disasters including diseases, drought and failed harvest. The inhabitants believed these to be due to the destruction of the shrines. The next king re-built the shrines but they were destroyed again in the twentieth century. By then the spirits were believed to have taken up residence in the banyan trees. The flanking steps of the sim are guarded by tigers. Next to them are two characters from Phra Lak Phra Ram, the Laos version of the Indian epic Ramayana – Hanuman and Ravana. 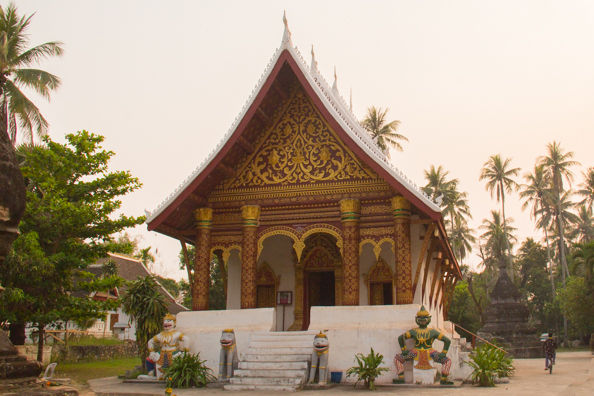 Situated on an embankment above the Mekong River Wat Xieng Thong, also known as the monastery of the golden city, is the religious emblem of Luang Prabang and one of the highest symbols of Buddhism in Laos. This is the reason it was not destroyed by the Chinese Black Flag army. The main building, or sim, is a wonderful example of classic Luang Prabang architecture. All of the twenty buildings in this complex are considered to be architectural gems. This temple was once the gateway to the town for visitors arriving by boat and it was also the place where the designated king would enter the city on the eve of his coronation after three days of prayer and meditation. While Xieng Thong was under royal patronage many changes were made by the royal family. It has undergone a number of restorations including one in 1928 with French assistance when the French Governor General visited Luang Prabang, the King Sisavangvong successfully demanded that the French share in the cost of restoration. Major projects have taken place during the 1950s and 1960s, when the funerary carriage house was built, and damage from war neglect was repaired. It is now a major attraction for tourists and pilgrims. This Wat also features an ornate tree of life which means different things to different cultures. 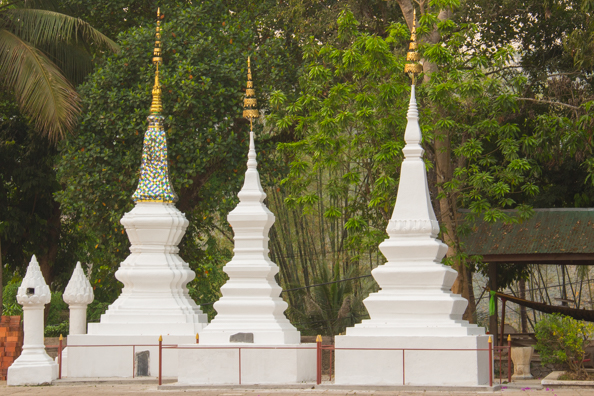 We had a break from temples to walk down to the bank of the Mekong River to watch the sun go down. Behind us was Wat Prabaht Tai a unique and colourful monastery combining elements of Thai Lao and Vietnamese architecture with a hint of European historic religious architecture. This wat also overlooks the Mekong River. It was on this site that the Naga King Chai Chamnong was said to have lived on a rock from which he could protect the rivers and their environs. The discovery of a huge footprint of the Buddha signified permission to build a monastery in this place. To this day that monastery still guards the footprint of Buddha although the original buildings were replaced by the Vietnam and Chinese communities in the late 1950s and these have since undergone restoration. 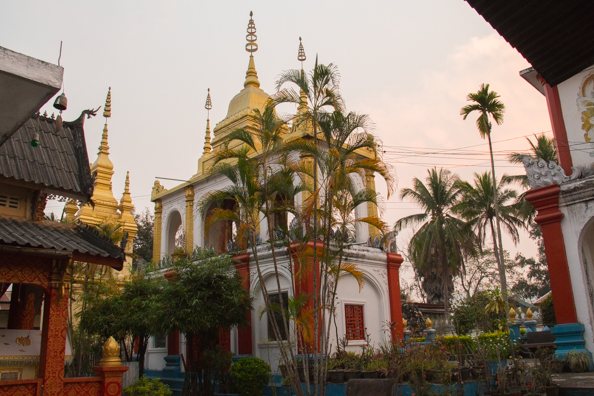 Spending time with Pom gave us a real insight into the life of a monk in Laos and as the picture below shows these paint-spattered monks do sometimes have fun.

Luang Prabang was not just about its temples as my earlier post about the town illustrates.