Some Captivating Charms of Luang Prabang in Laos

Santi Resort and Spa in its lovely garden setting on the outskirts of Luang Prabang in Laos was a pleasant change from recent stays in city centre hotels. As the hotel runs a free shuttle service into the town it was easy to get there to stroll through its pretty streets sprinkled with French colonial houses and Laotian temples. It seems time has stood still here. As the shuttle was available in the evening it was easy to visit the night market and enjoy the cuisine in local restaurants. Although the food in the hotel was as good as any I sampled in the town and beautifully presented. 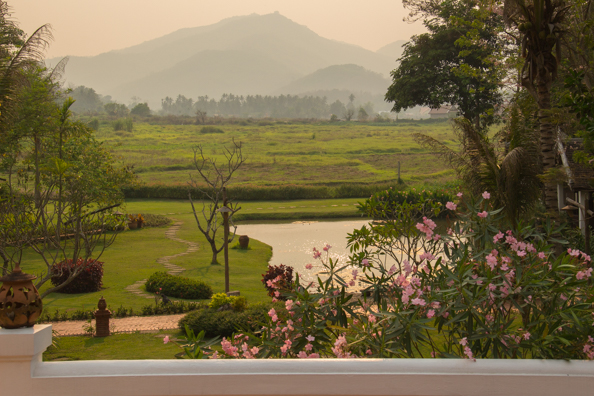 The lack of traffic and crowds was refreshing – vehicles actually stopped to allow us to cross the road. And the only time I encountered any crowds was when strolling through the night market. When the night market is open the street it occupies is closed to traffic and visitors can wander freely up and down the two lines of stalls. An amazing variety of products are on sale from mouth-watering iced doughnuts to lovely hand-woven scarves and brilliant lamps. 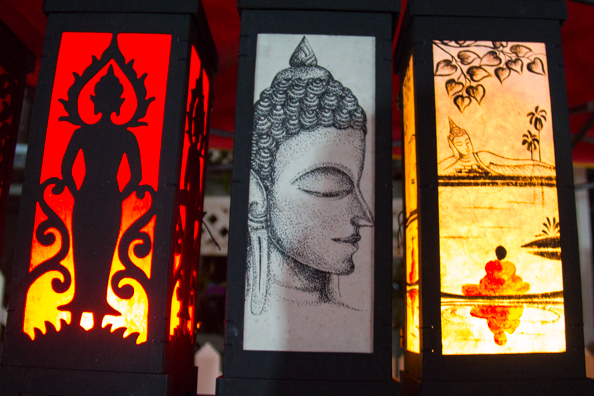 The cool of an early morning is a good time to walk to the top of Vat Phousi Hill or Mount Phousi. The Thanon Phousi staircase winds its way up the one hundred and fifty metres to the top. Flower and purveyors of small birds housed in basket weave cages punctuate the way. The flowers are to offer for blessings and the the Lao believe that setting a bird free will bring good luck and happiness. Wat Tham Phousi shrine is half way up the hill and features a big-bellied Buddha in a grotto and a reclining Buddha. Wat Chomsi is perched on the top. This stupa was built by King Anourat in 1804 but the hill it stands on is, of course, much older than that. Reputedly this hill has ancient roots in the Indian epic poem Ramayana which tells how the Hindu monkey god Hanuman moved the mountain from Ceylon (Sri Lanka) to its present position. I spent some time at the top enjoying the views across the town to the Mekong River on one side and the Nam Khan River on the other. And peeking through the window to admire the pretty interior of the small temple up there. 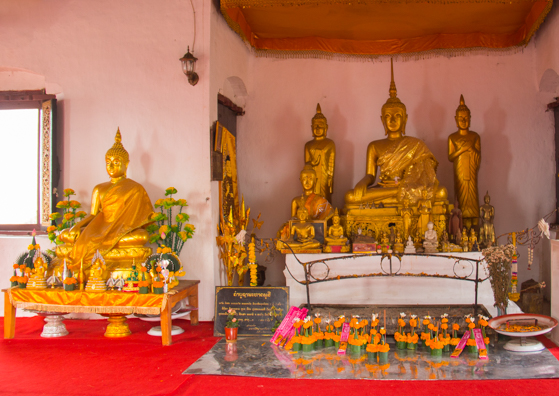 Below me, as I walked back down to the town was the Royal Palace or Haw Kham that has been preserved as a museum. The royal palaces in Luang Prabang are a testament to the fact that Luang Prabang was once the royal capital of Laos. Designated a UNESCO World Heritage Site in 1995 this tiny town, encircled by mountains, is still considered to be the heart of Laotian culture. It was due to threats from neighbouring countries, Myanmar (Burma) and Thailand, that Vientiane became the administrative capital in 1545. However, Luang Prabang remains the more popular destination for tourists. And no wonder with its beautiful old buildings and inherent charm. The Royal Palace or Loyal Palace was no exception. All the buildings in the complex appear to have been left as they were when housing the last royal family. The palace was built by the French in 1904 to replace a smaller teak and rosewood palace. King Sisavangvong insisted on modifications and substituted the stupa-like spire resulting in a fusion of European and Lao design. The exhibits inside are much older than the building and illustrate the turbulent history of the Lan Xang kingdom. I had some fun with the portrait of King Sisavangvong whose eyes follow you as you walk past him. He was said to have had an eye for the women borne out by the fact he had around fifteen wives and fifty children. The immaculate grounds are also the site of Hor Prabang (a temple), a new exhibition hall and a large bronze statue of King Sisavangvong. 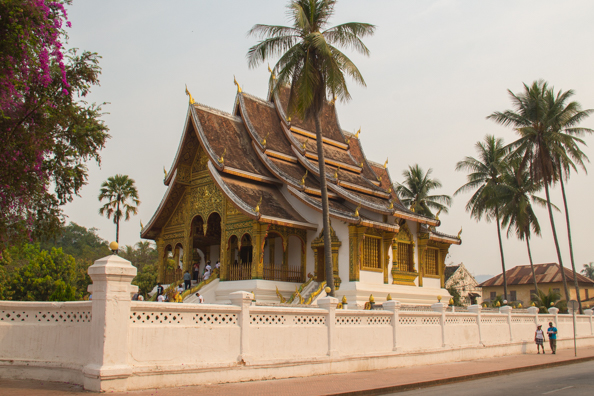 A cruise along the Mekong River is a good way to explore beyond the town. Our long, narrow pleasure boat nosed its way through the muddy brown waters and I sat back to enjoy the cooling breeze and the agricultural setting. This featured a few cows and a working elephant. After an hour we came to the village of Ban Xang Hai also known as the whisky village. For centuries the inhabitants of this village have made the clay jars that were used to ferment Lao wine. Now they specialise in the production of Lau Lao Lao rice whisky and Lau Hai Lao wine which they ferment in these clay jars. Water from the river is used to soak rice in large jars which are then left for several days. The alcohol that results from the can be drunk as a cloudy liquid or distilled. After trying different flavours of the distilled version we had a walk around the village temple and then the stalls selling a mixture of hand-woven and imported fabrics. 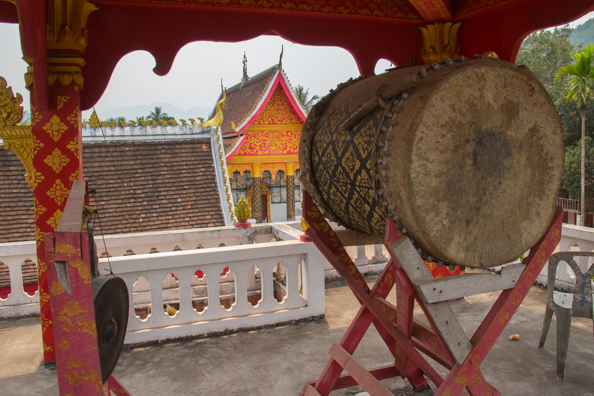 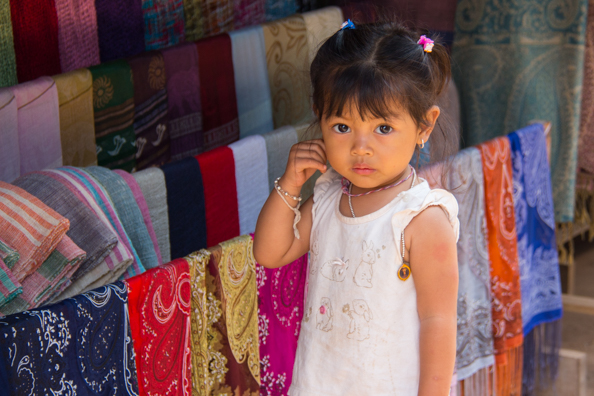 Back on the boat we crossed the river to visit the famous Pak Ou Caves . These limestone caves penetrate a steep rock cliff rising vertically from the waters of the Mekong River where it meets the Nam Ou river. The scenery is stunning especially from the mouth of the caves. Two of the caves are full of Buddha images in a wide variety of styles, colours and size. Over the centuries thousands of these images have been placed in the caves by locals and pilgrims. 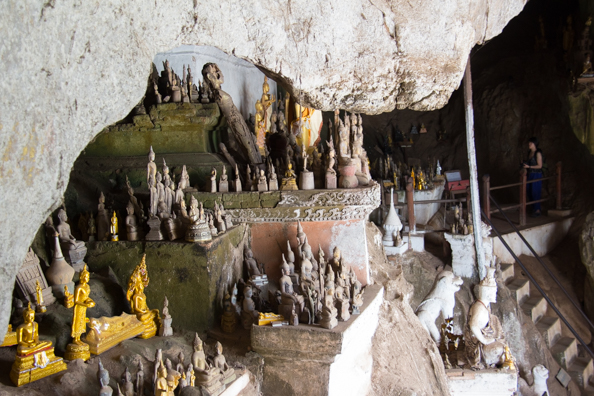 On the way to the Kouang Si Waterfall we stopped at a Hmong Village. The Hmong are a minority tribe in Laos. They emigrated here from China during the eighteenth century due to political unrest. We were met by a group of precocious children, some dressed in traditional costumes, and all trying to sell us woven bracelets for one dollar each. It was hard to refuse as their wide eyes would well up with tears if you tried to move on without making a purchase. The one long semi-circular street through this village was lined with stalls all selling similar items. After the first few stalls it became quite a harrowing experience – there is a limit to the number of souvenirs you can buy. 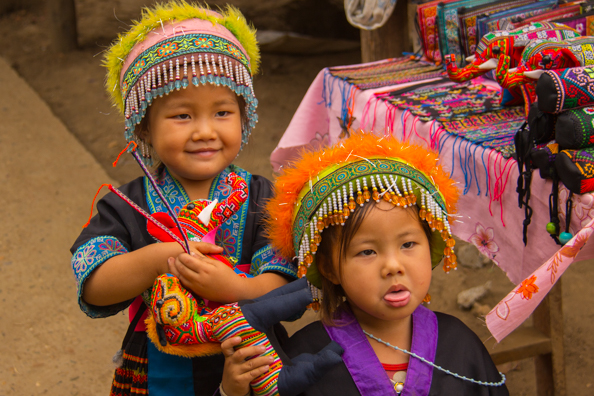 We had been promised a picnic when we arrived at the Kuang Si Waterfall and I had visions of eating soggy sandwiches sitting on the ground. In fact we were served a three-course meal sitting on benches at a long table in the shade of some trees right by a waterfall. It was a lovely experience. After eating we strolled along a footpath that wove its way between beautiful pools and cascades of water. A photo-shoot was taking place and several beautiful girls, the finalists of the Miss Laos competition, were posing around the pools. 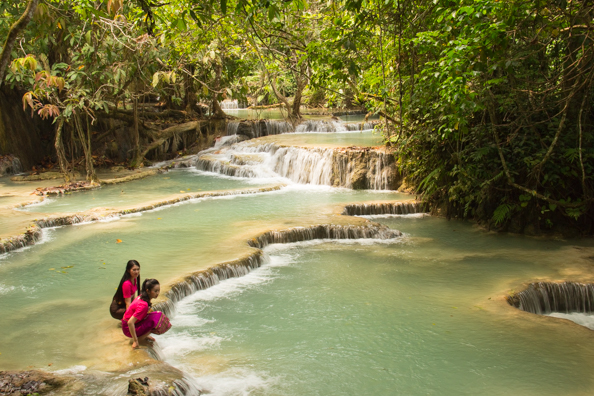 These are only a few of the charms of Luang Prabang – there were more to come explorng with Pom, our guide.