Extract From My Diary: A Neanderthal Experience in Gibraltar 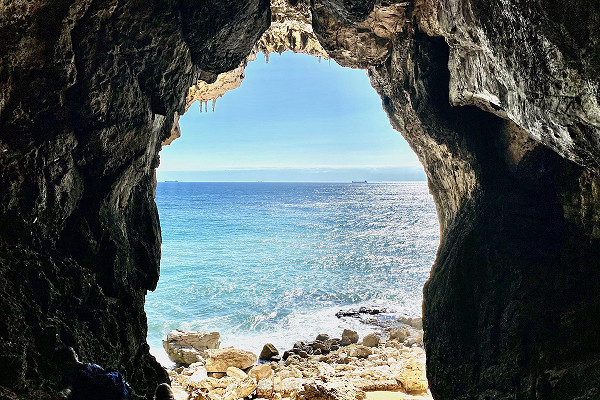 Today I am visiting the Gorham Cave Complex in Gibraltar. There is only one access to this complex, down the side of a very steep cliff. Two emotions run through me as I stand on top of a cliff in Gibraltar looking down series of flights of steep steps. One is the thrill of visiting Gorham’s Cave where it has been proven Neanderthals once lived. The other, slight trepidation at the thought of the challenge of climbing down and then up nearly four hundred steps having had a bilateral total knee replacement a few years earlier. As we stood on the promenade at Europa Advance Battery looking across the sea at the caves I felt the excitement mounting in me. I was about to tread the same path that the Neanderthals had trodden hundreds of thousands of years ago to get to the caves I could see in the cliffs across the bay. 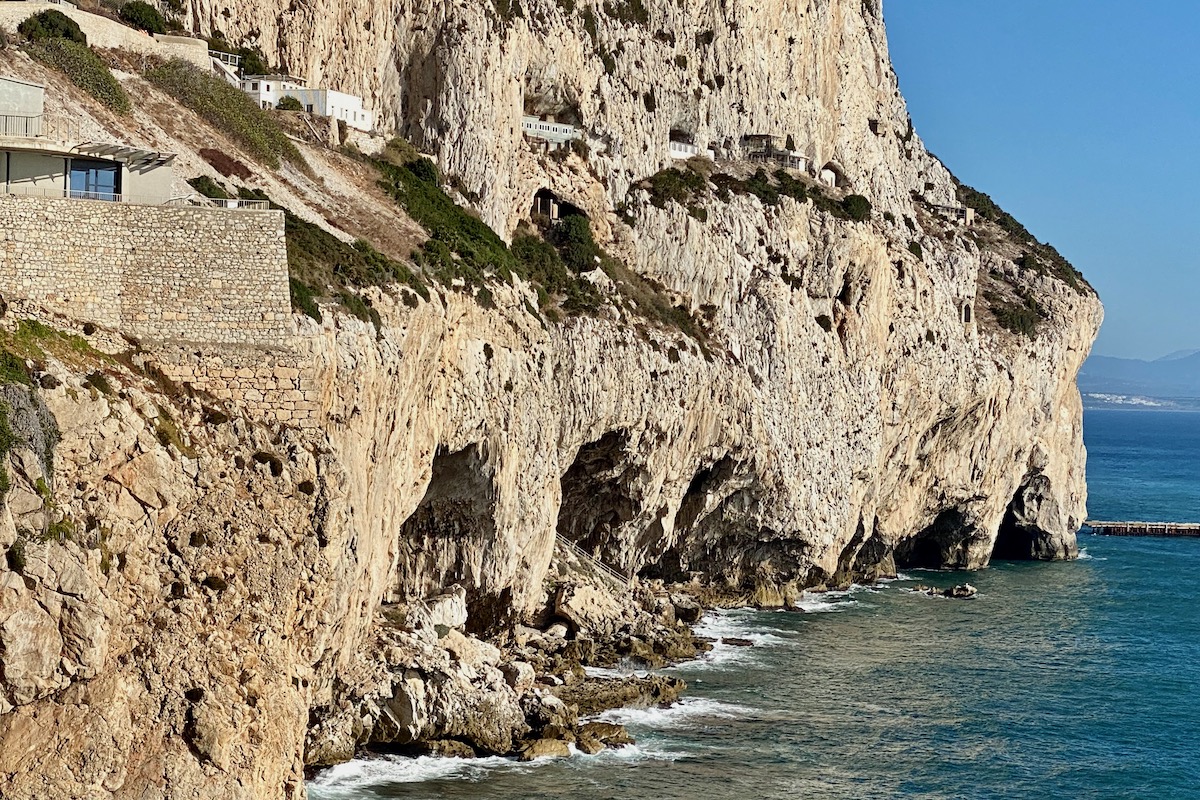 No doubt, the Neanderthals would have accessed Gorham’s cave from the sea as the caves, formed by the action of the sea have since been pushed higher up the cliffs, also by the action of the sea. They certainly would not have had a series of steep steps clinging to the cliff face to walk down. I was enjoying this new challenge, seeing how well my new knees would cope. I knew I could do it. My only concern was holding up the group I was with. But, after driving the short distance up to the entrance to the archaeological site I can see the steps have railings all the way down. Nevertheless, I hang back to let everyone go in front of me and also to give myself a photo opportunity. 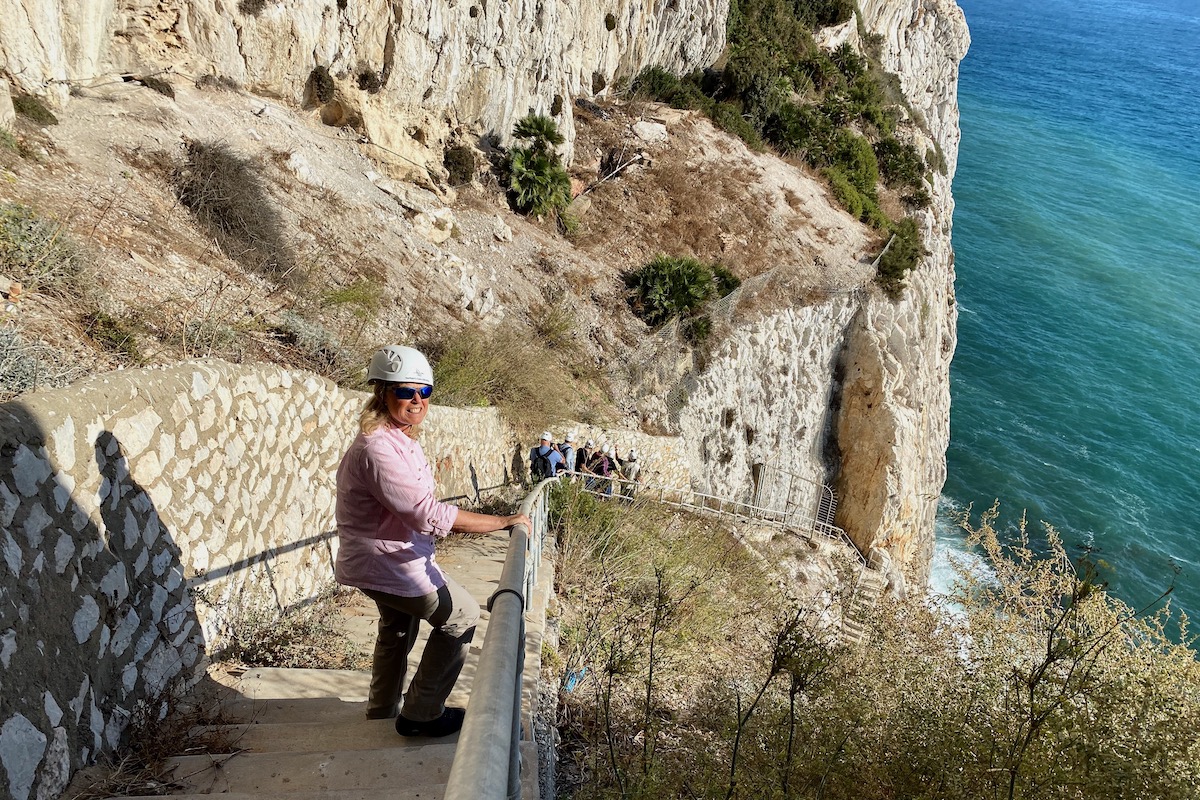 Visits to the cave are weather and tide dependant and although the cave is open to the public only 120 people have made the descent so far this year. Numbers are limited to protect the site and visits have to be pre-booked through the Gibraltar National Museum in the town. We are lucky, the weather is glorious, the steps are dry and the tide is out. After pausing to hear more about our adventure from Professor Clive Finlayson we follow him down the steps to Gorham’s cave. It is an easy descent (if you don’t mind heights) as the steps are of uniform depth and width. I am soon able to relax and enjoy the stunning scenery around me. 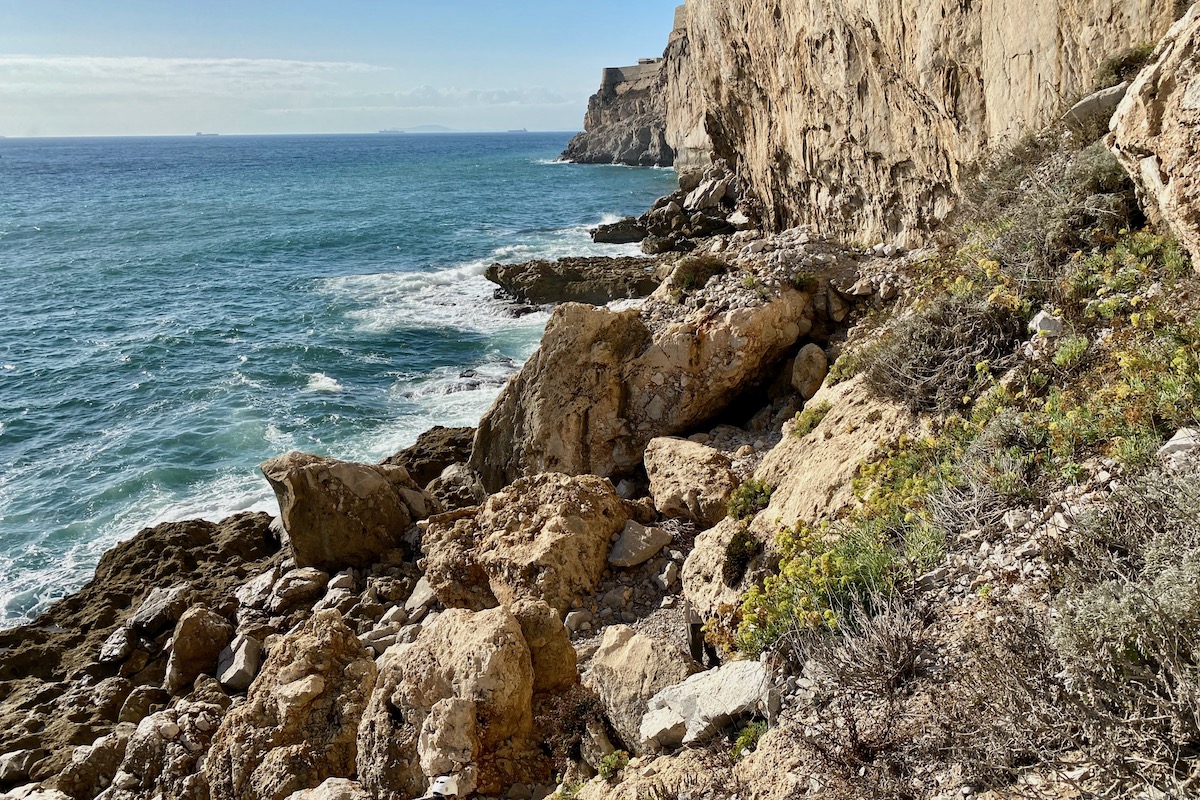 But, when we get down to the sea shore there is nothing that resembles a path. Just a vast expanse of jagged rocks, boulders and pebbles littered with small pools and water soaked surfaces. I spent a lot of time scrambling over rocks on a recent trip to the Italian Dolomites. So, I am in my element scrambling over rocks using feet, hands and the occasional sit down and slither. We take a short cut through a tunnel in a rocky headland. Waves crash down onto the rocky shore to one side of us and majestic limestone cliffs line our route on the other. An occasional light spray is refreshing in the heat of midday. 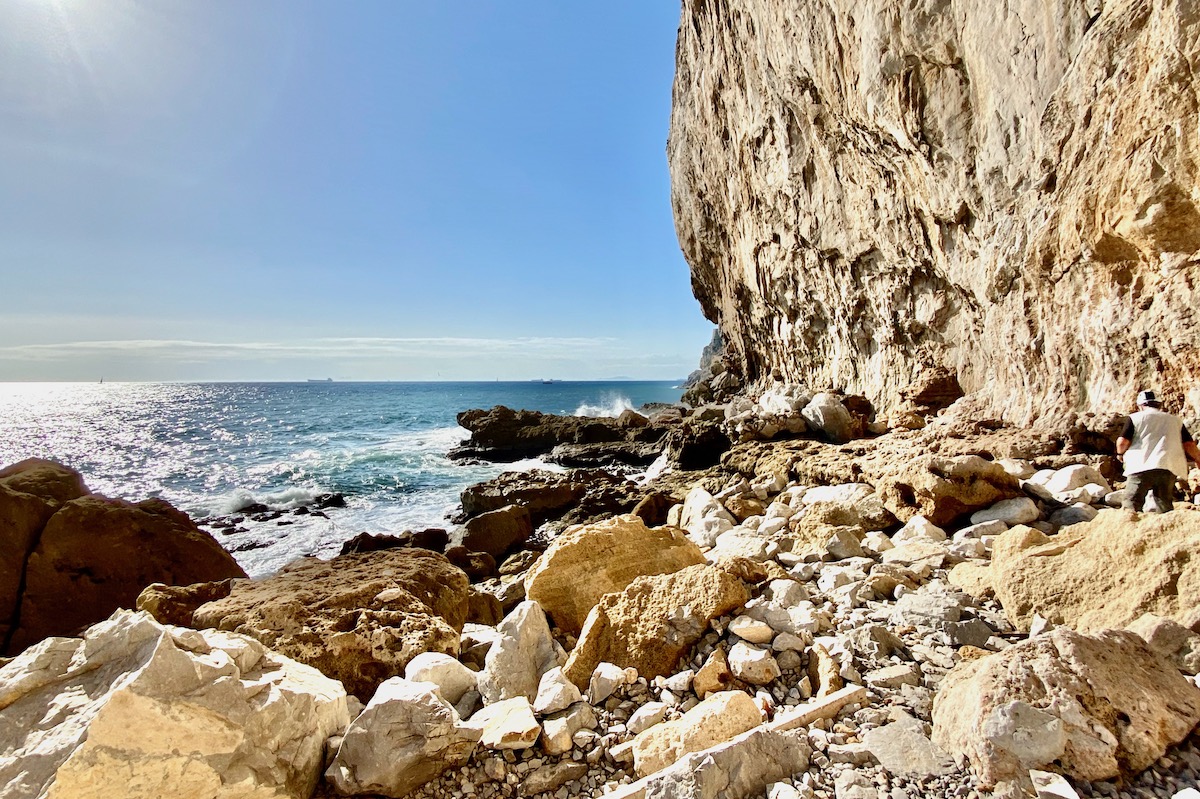 We climb up into Gorham’s Cave and gather around Clive to hear more of the enthralling tale regarding the excavations here and the information they are piecing together about the lives of the Neanderthals when they inhabited this cave. And not just Neanderthals as this cave has been inhabited during later periods. This suggests there is something very special about it. The view from the large outer cave maybe – it is certainly spectacular. 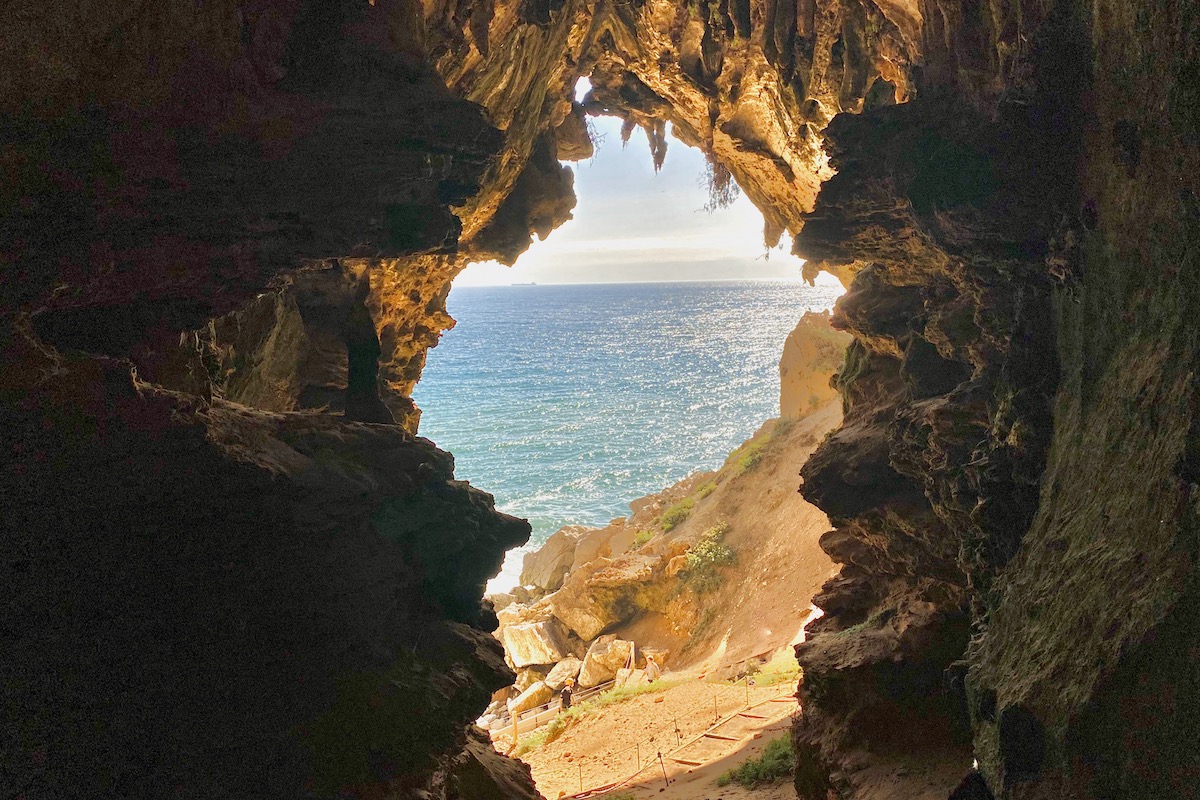 More likely it is the position, protected by the sea and occupying a good vantage point. But Clive tells us there is evidence that this may have been a temple or sacred place. A lot of interesting artefacts have been found in this cave including items known to have been offered up to the gods. In total more scarabs than have been found in the whole Iberian Peninsula. A significant find is a gorgoneion mask (the mask of the Underworld Demon) usually associated with places considered to be an entrance to the Underworld. The hairs stand up on the back of my neck. We have now moved further into the cave which seems to penetrate far into the cliff face. 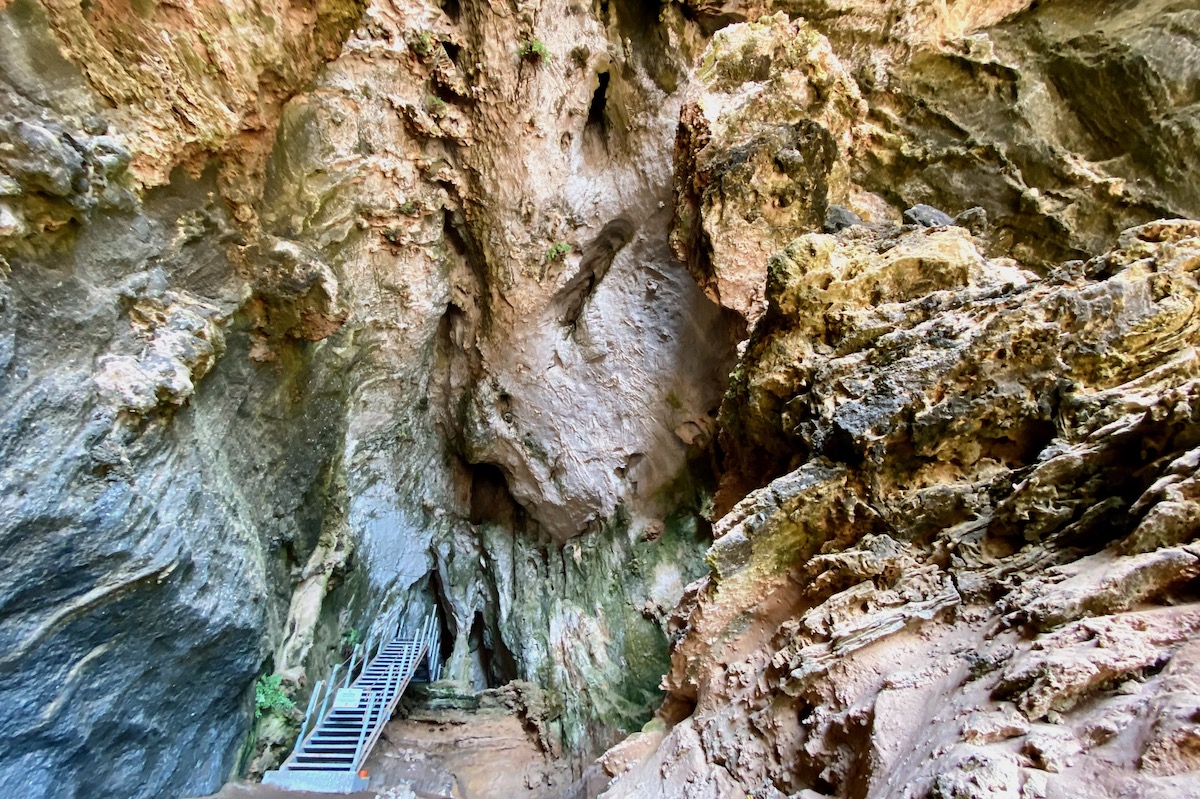 Back outside in the sunshine Clive offers us a very special experience, a visit to a second cave, the Vanguard cave. This is still being excavated and is not open to the public. We are all enthusiastic regarding this proposition. But first we have to negotiate the rocky expanse again. Clive and I are the last to leave the cave as we have been relishing the experience of being in such a special place. I follow Clive who is more adventurous regarding the route he chooses – which is great fun - and we soon catch up with the others. Access to the Vanguard Cave is not as easy as it was to Gorham’s cave – shallow, sandy steps with no railings and a steep ascent into the interior aided by a sliding rope attached to the interior wall. 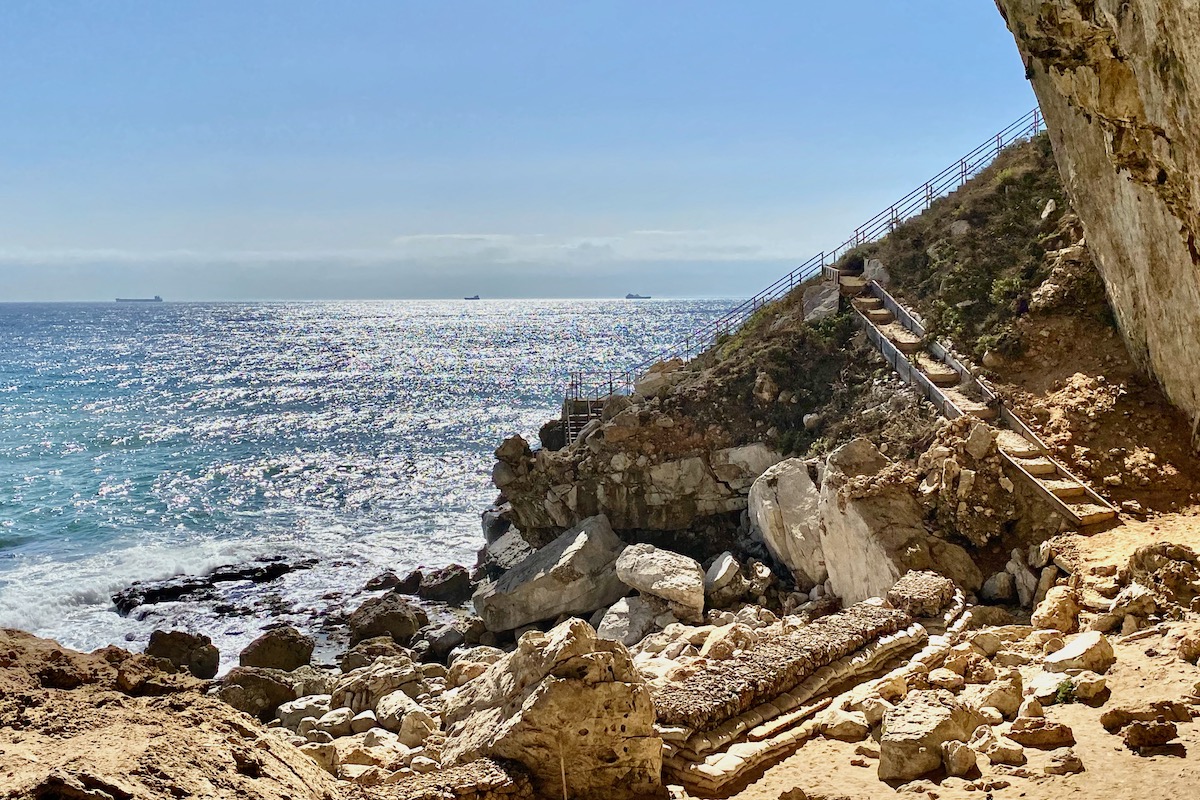 This cave was only ever occupied by Neanderthals and a newly discovered chamber at the back of the cave had not been entered for forty thousand years before excavations began. Such a privilege to be allowed to visit and talk to the people working in there. My adventure ends here and after thanking Clive for such an exhilarating and extraordinary experience I make my way back to the top with a spring in my step. 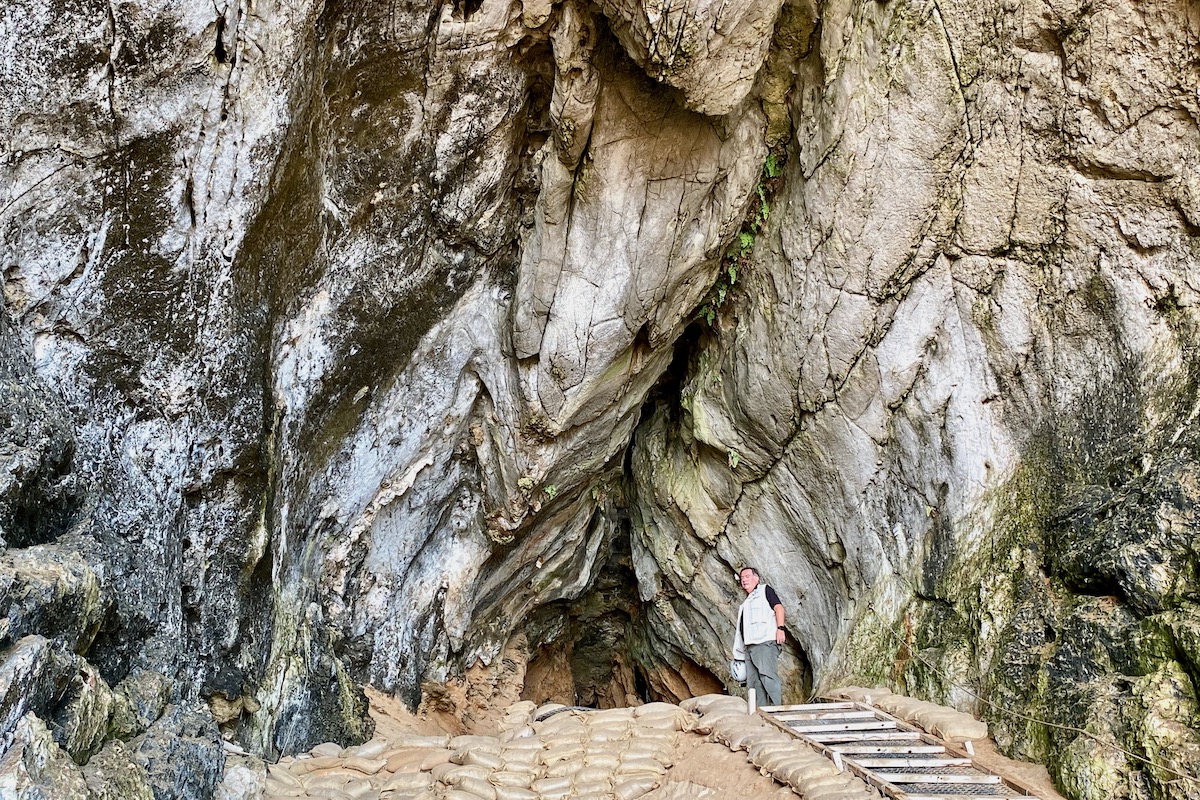 Note: The Gibraltar Caves Project was born in 1989 out of a contact between the present Curator and a team from the British Museum and the Natural History Museum in London. It all started with the revisiting of the magnificent Gorham’s Cave site which had been partially excavated in the 1950s. The project continues to the present day, with annual excavations by an international, multidisciplinary team. One result of this work has been the inscription of the Gorham's Cave Complex as a UNESCO World Heritage Site.