I started my day in Tromsø, Norway on Mt Fløya looking down on the city as the sun rose and it was bathed in a pink and pale blue hues. Magical.

Tromsø is reputed to be one of the best places to view the Northern Lights and every evening fleets of vehicles head out into the surrounding countryside in the hope of seeing them. During the day ships sail off to view the rich wildlife in the sea around it. The city, one of the largest in Norway, is on the rugged coastline of Northern Norway inside the Arctic Circle. It has a rich history as a result of its Pomor Trade with its neighbour Russia and its popularity as a starting point for polar expeditions. Today, this history is reflected in its historic buildings and an interesting variety of museums and attractions. I started my day with a ride on the Fjellheisen Cable Car. 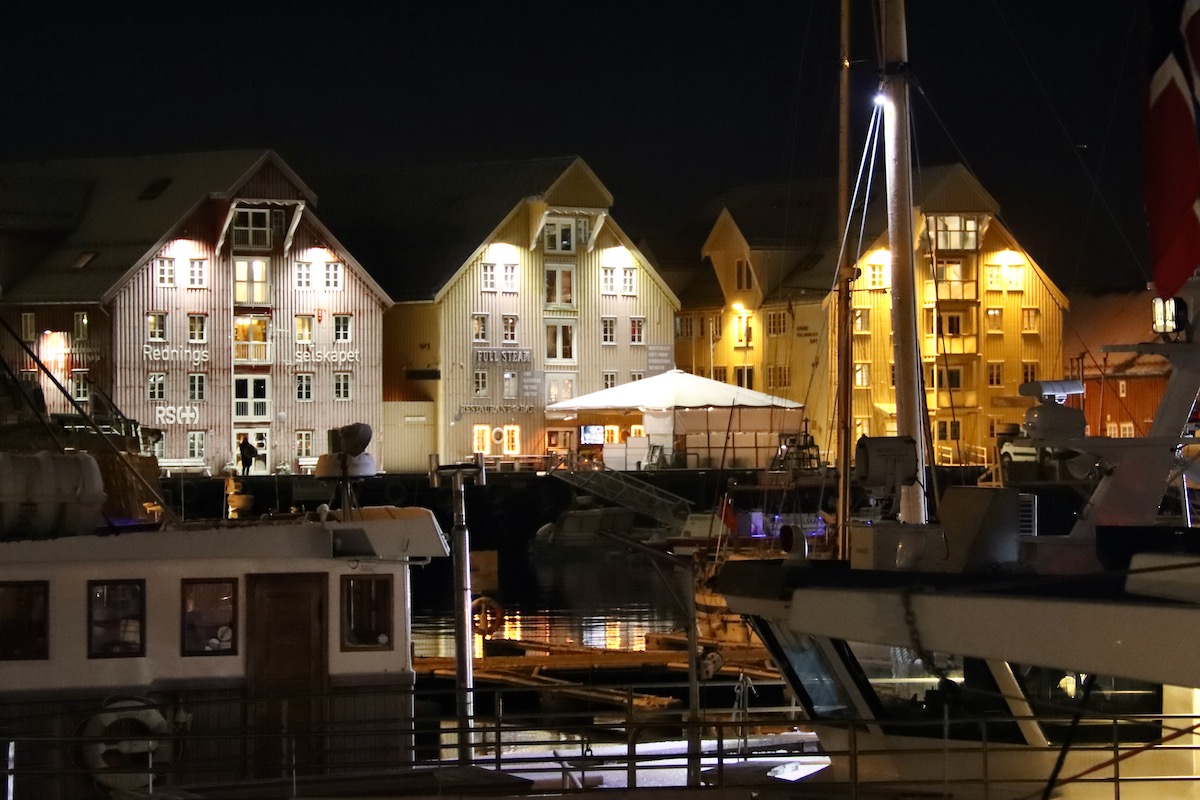 During the winter the sun does not rise in Tromsø until mid-morning and coincides with the first journey of the Fjellheisen Cable Car to a viewing point on Mt Fløya at 10 am. This is the best time to ride this very popular cable car. Beyond the viewing platform there are walking trails to the top of Mt Fløya. Refreshments are available in the Fjellstua Café, which serves hot beverages and food including reindeer burgers and reindeer stew. It is a pleasant walk from the city centre, across the Tromsø Bridge to the bottom of the cable car. 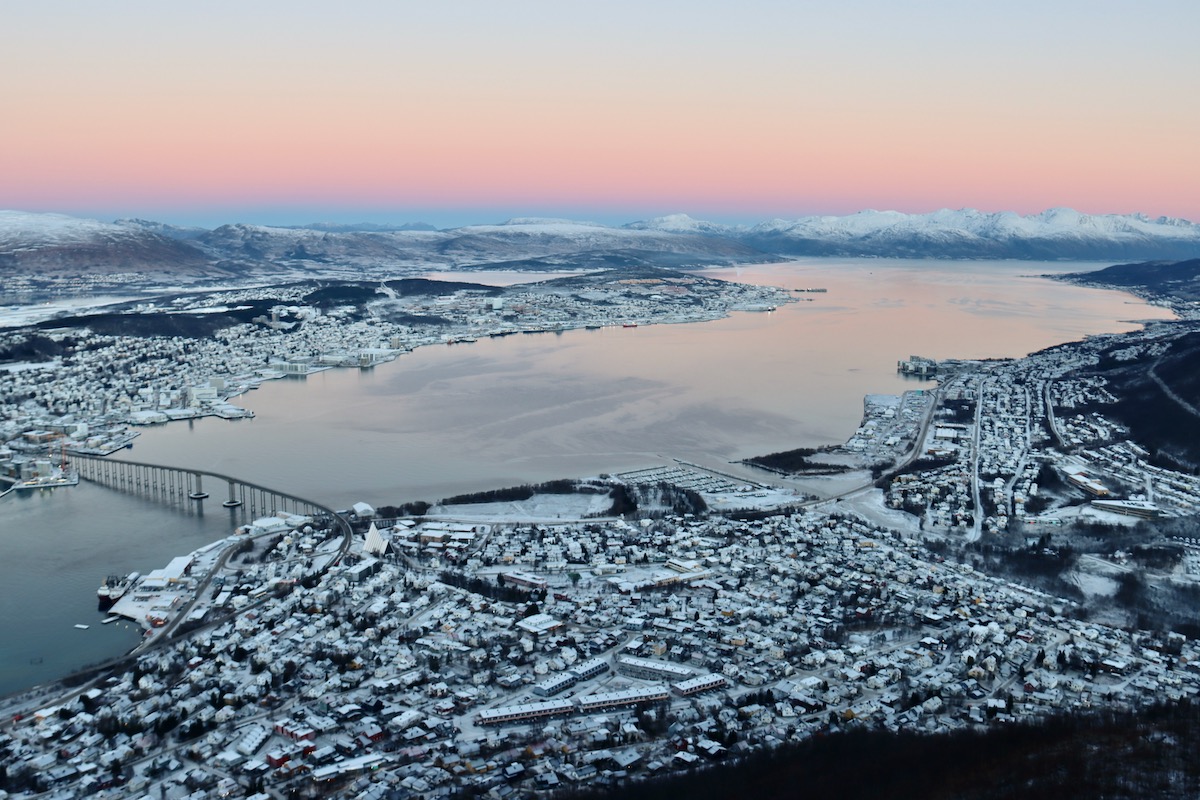 The Tromsø Bridge in Tromsø, Norway

Tromsø bridge spans the strait between the islands of Tromsøya and Kvaløya and the mainland. It was opened in 1960 to replacement the ferry service and aided the rapid expansion of the city. During the 1990s the connection between the islands and the mainland was improved by construction of the Tromsøysund Tunnel. There are paths on either side of the road, one for cyclists and one for pedestrians. On the far side of this bridge is probably Tromsø’s most iconic attraction, the Arctic Cathedral. 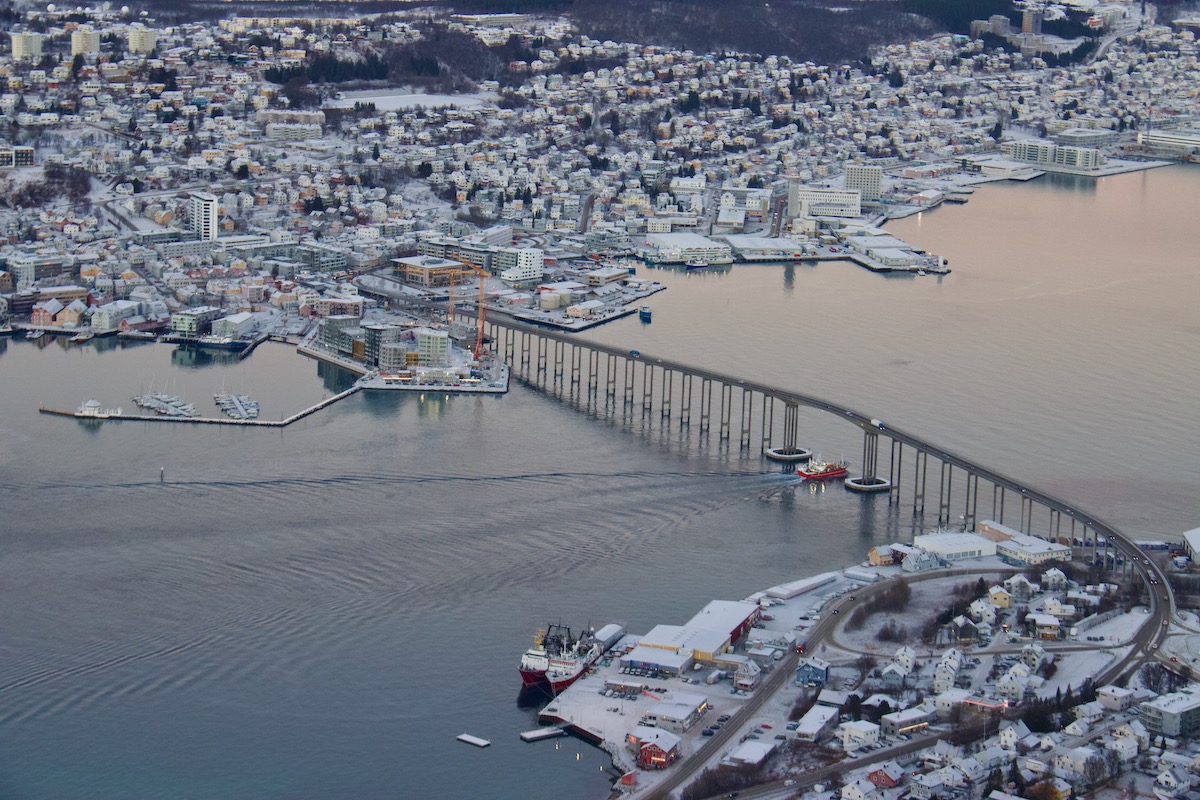 The Arctic Cathedral in Tromsø, Norway

Although it is known as the Arctic Cathedral this contemporary building is, in reality, a parish church built in 1965 for the congregation of Tromsdalen where it is located. It was designed by the architect Jan Inge Hovig and constructed from aluminium-coated panels. A stunning stained glass window, by Victor Sparre, was installed at the back of the church in 1972. In winter a warm glow radiates from this window. This church also boasts an incredible organ and is lit by shimmering chandeliers. The real cathedral of Tromsø is on the mainland. 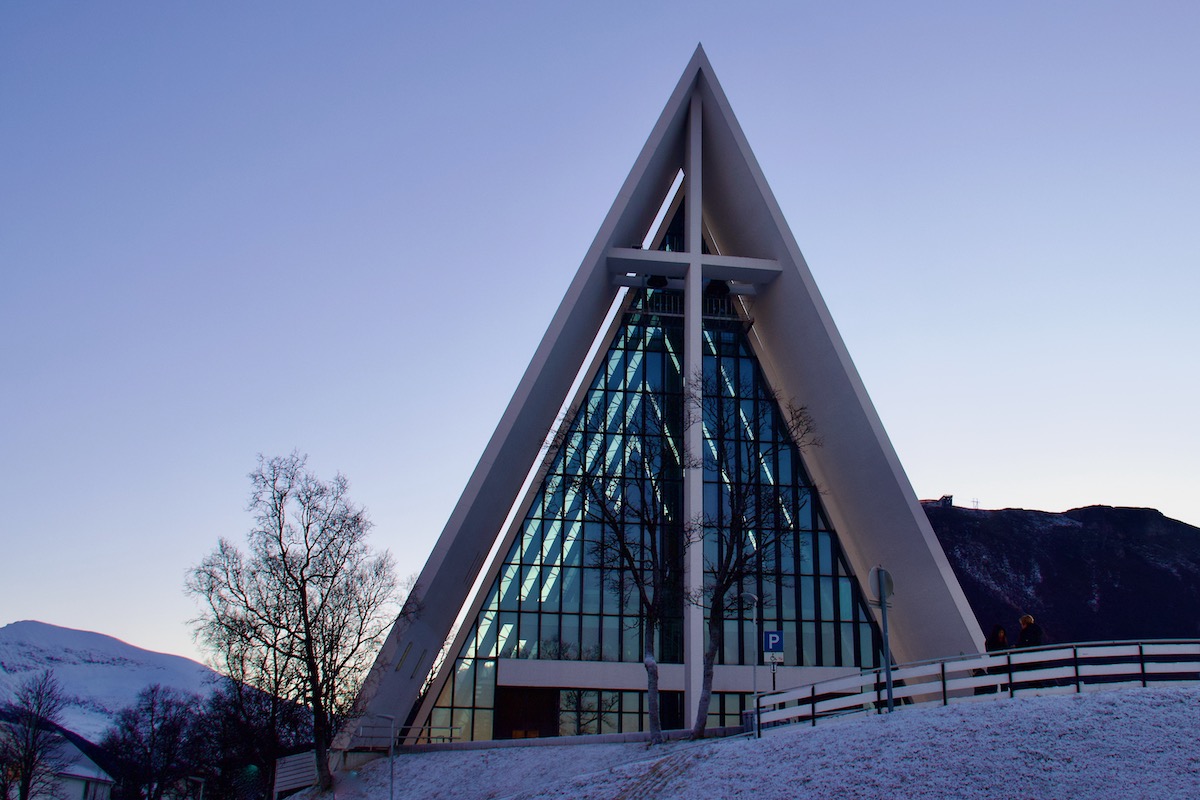 The Cathedral in Tromsø, Norway

Tromsø Cathedral (Tromsø Domkirke) is the only wooden cathedral in Norway. It was designed in neo-gothic style by the architect Christian Heinrich Grosch and built in 1861. This lovely yellow building stands alone in the centre of the city a short distance from Skansen’s historic wooden buildings and the waterfront where the Polar Museum is situated. 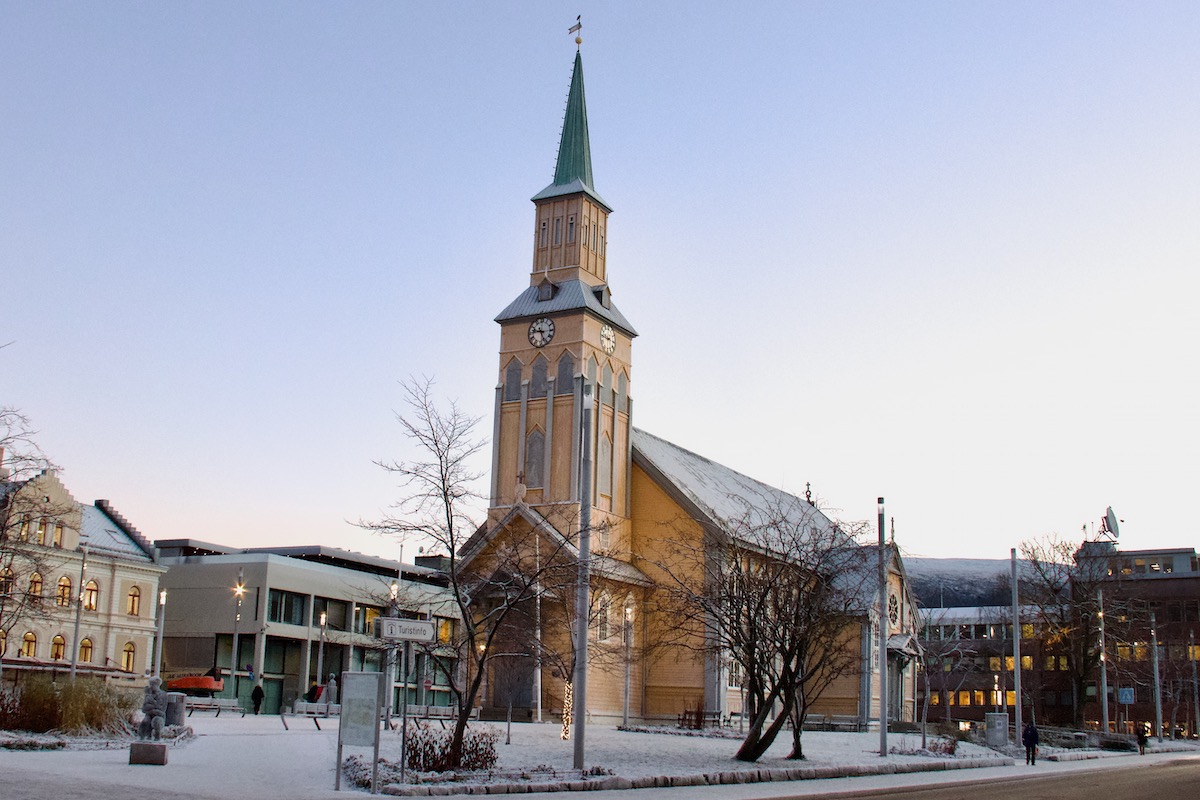 The Polar Museum in Tromsø, Norway

A traditional 1830’s warehouse on Søndre Tollbodgate near the waterfront is home to the Polar Museum. Inside visitors can discover the harsh reality life in the Arctic when whaling, seal hunting and trapping were an essential part of life in Tromsø – fortunately no longer allowed. During the late nineteenth century many arctic expeditions set out from Tromsø including those led by the famous explorers Nansen and Amundsen when attempting to reach the ice fields of Greenland and the North Pole. Interesting artefacts on display here illustrate the conditions they had to deal with. Further along the waterfront is a unique addition to the Tromsø’s attractions, the Troll Museum. 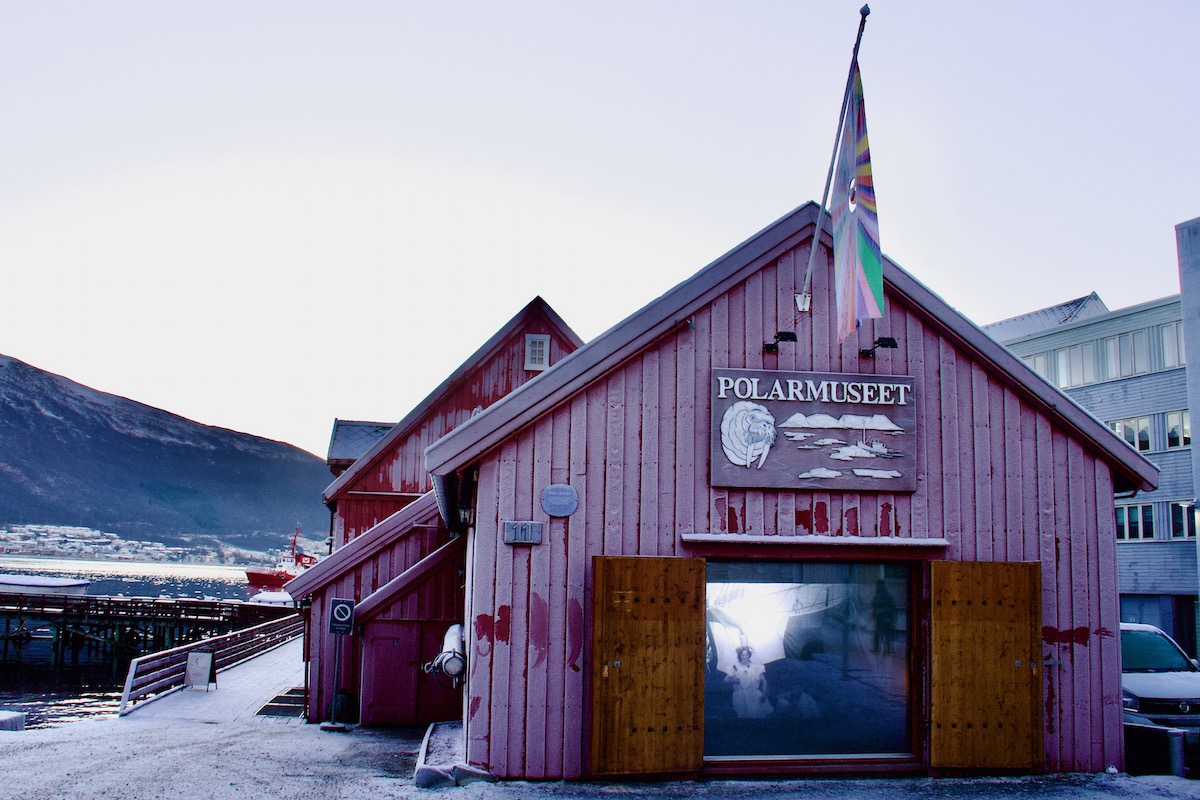 The Troll Museum in Tromsø, Norway

As the winter light fades visitors can retreat to the cosy Troll Museum and immerse themselves in the fairy tales, myths, trolls and games that are featured there. This museum is the only troll museum in Norway. It was created using Augmented Reality technology which enhances the static exhibits by bringing them to life on the tablets positioned around the museum. Adults and children will find plenty to do in this small museum that occupies two halls, one representing the road of the trolls and the other, the home of the sea troll. 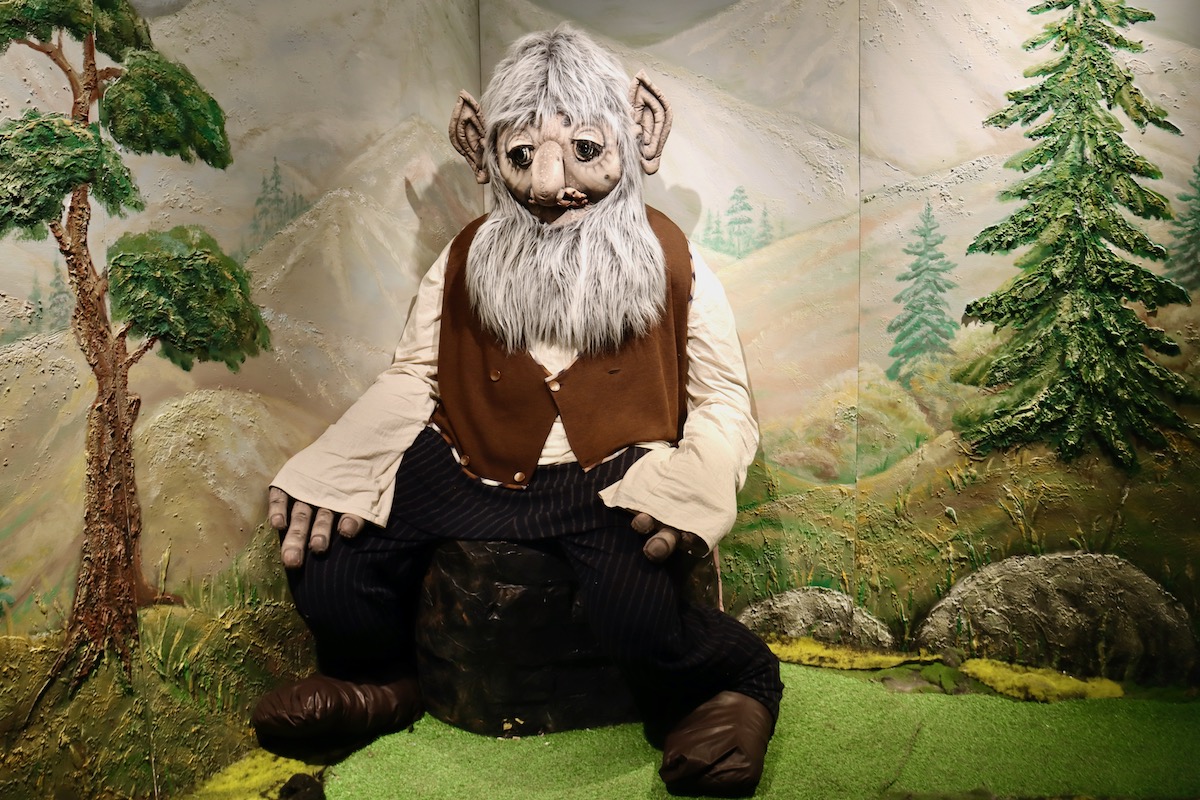 Polaria is an Arctic themed experience based in an unusual building that represents Ice floes pushed up onto the land by the rough Arctic seas. Inside the central feature is a large aquarium. This aquarium is home to two bearded seals and two harbour seals. Their activities can be views from a boardwalk around the aquarium and a glass tunnel under it. Smaller aquariums housing various sea creatures and a panoramic cinema shows about the Arctic and the Northern Lights. 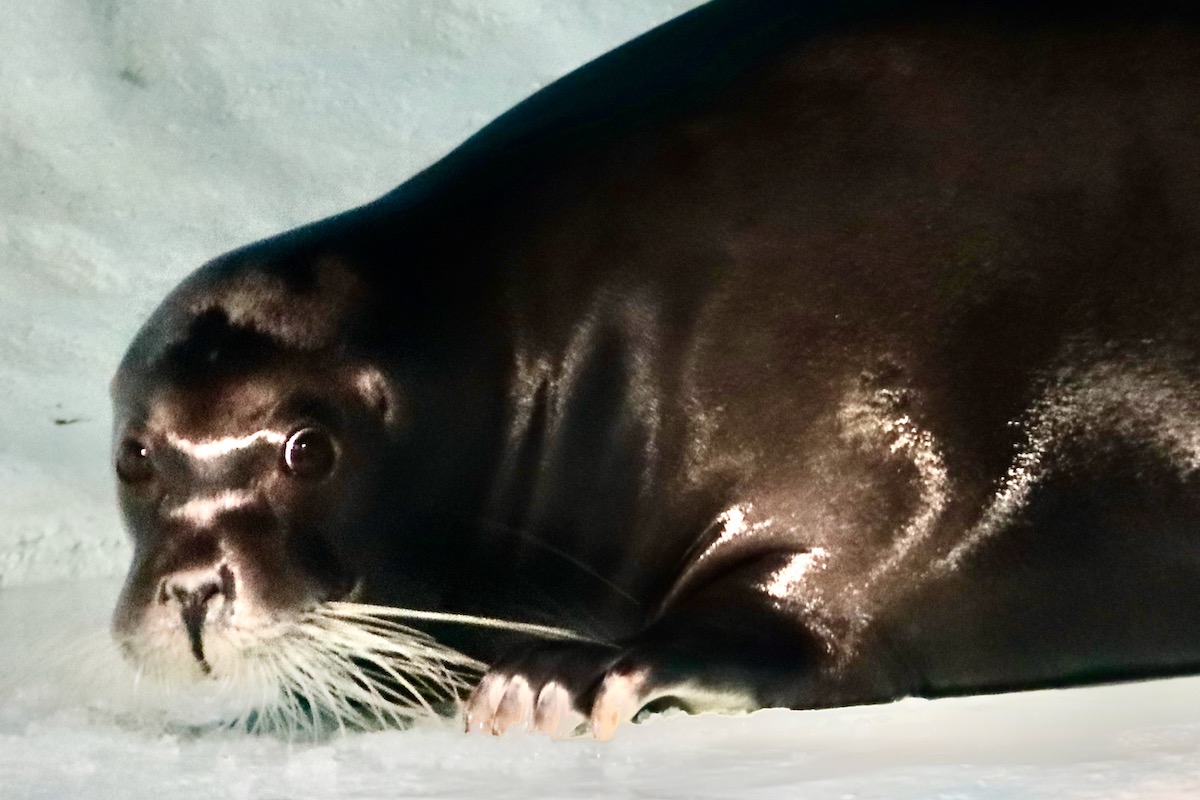 Outside Polaria, encases in a small building, is the ship M/S Polstjerna. This former sailing ship was used to catch seals between 1949 and 1981. A museum has been set up inside this ship offering an interesting immersive experience. Between the two buildings is an evocative sculpture of Helmer Julius Hanssen, a Norwegian sailor, pilot and polar explorer, complete with sledge and husky dogs. Hanssen was one of the first explorers to reach the South Pole. The most important street in the city, Storgata, passes in front of Polaria and leads to two linked squares Stortorget and Torget. 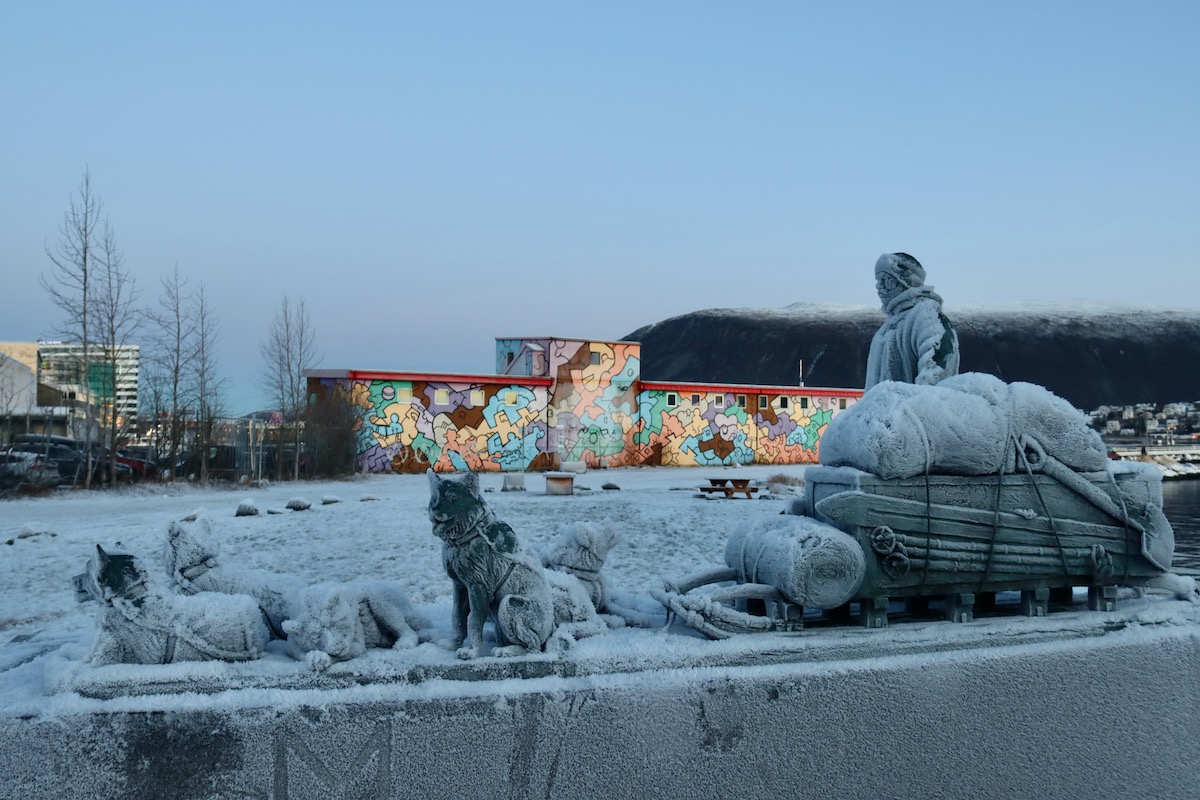 In daylight and darkness Torget, the main square, is the throbbing heart of the city and features several important monuments. In front of the old Town Hall that looks down on this square is the Music Pavilion (Musikkpaviljongen). This wooden, domed structure was built at the end of the nineteenth century during a period when it was considered important to provide public entertainment for residents of European cities. This music pavilion is one of very few nineteenth century pavilions left in Norway and it is the oldest one in Northern Norway. 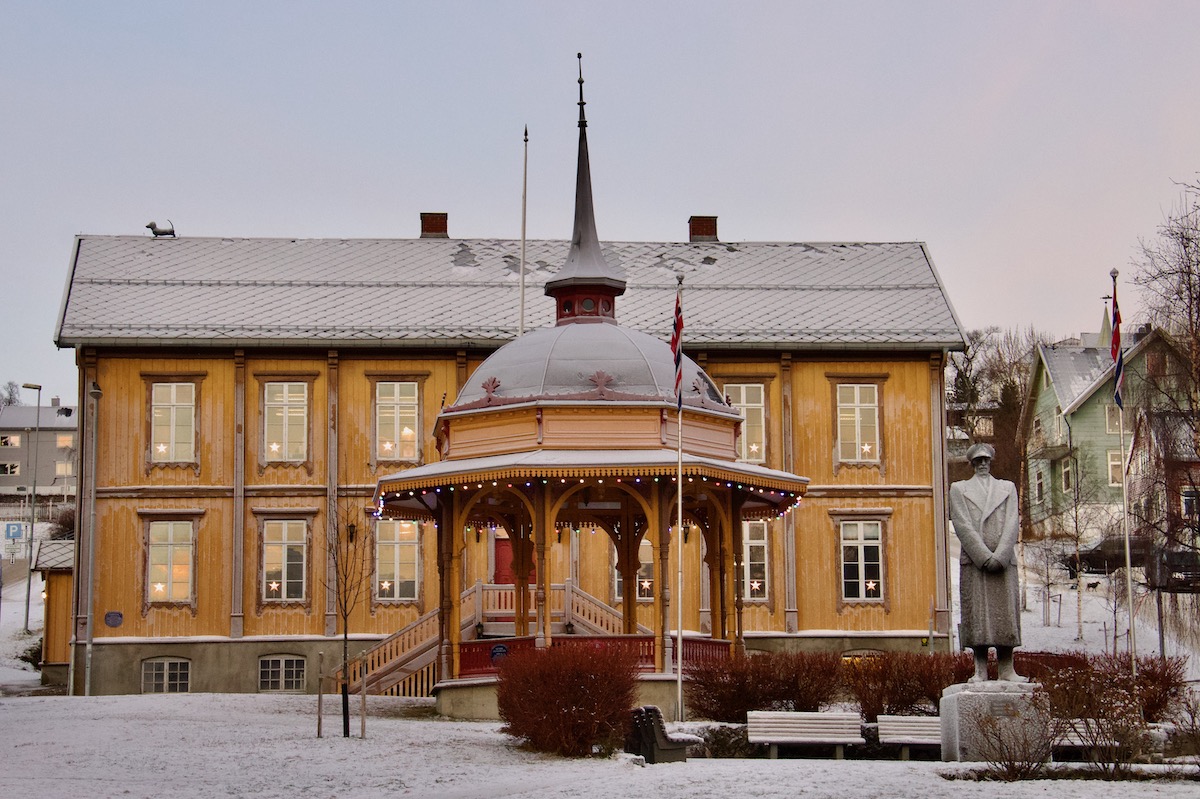 Above the area known as Storget is the Rocket Kiosk. Originally a newspaper kiosk which opened in 1911 it is now a tiny café and purveyor of reindeer hotdogs. This cute little edifice has survived two world wars and a city fire. 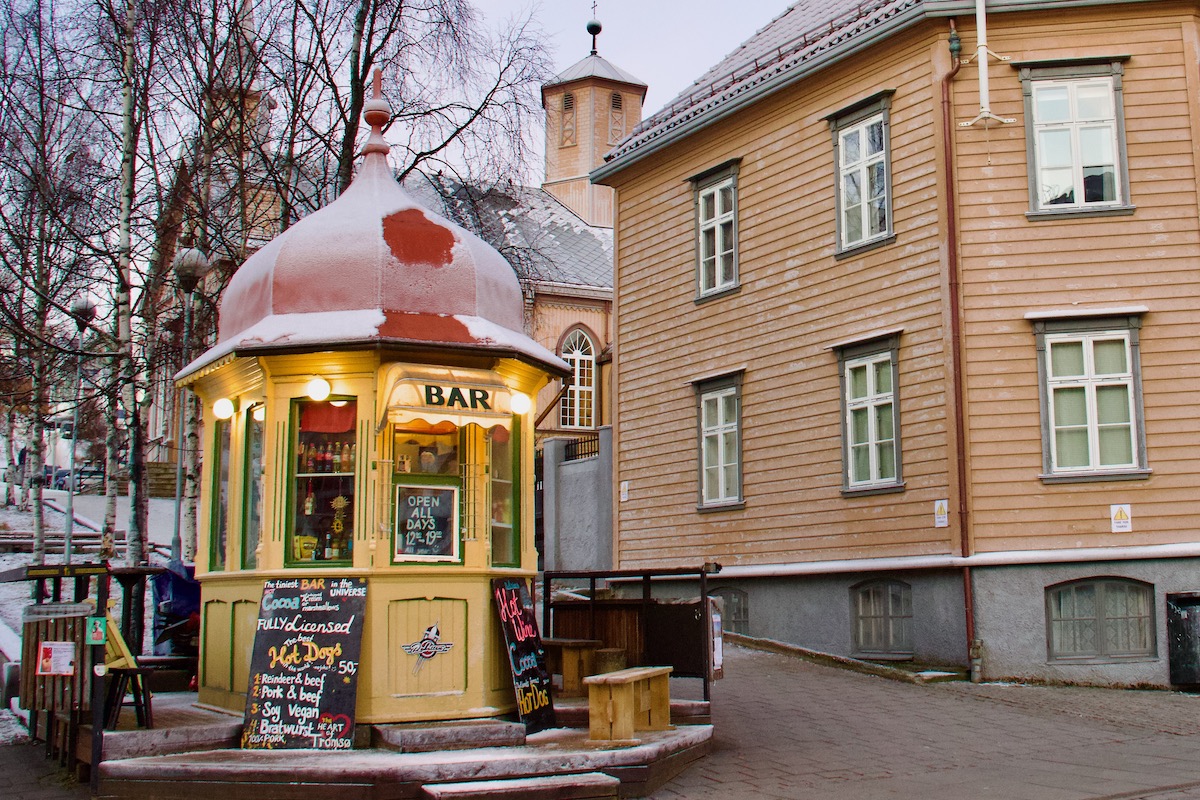 On the harbour side of the square is an impressive monument commemorating hunters and fishermen who have died at sea. Fangstmonument, a bronze sculpture of a whaler at sea, was created by Sivert Donali and unveiled in 1984. Tromsø boasts many excellent restaurants offering a good variety of different cuisines. 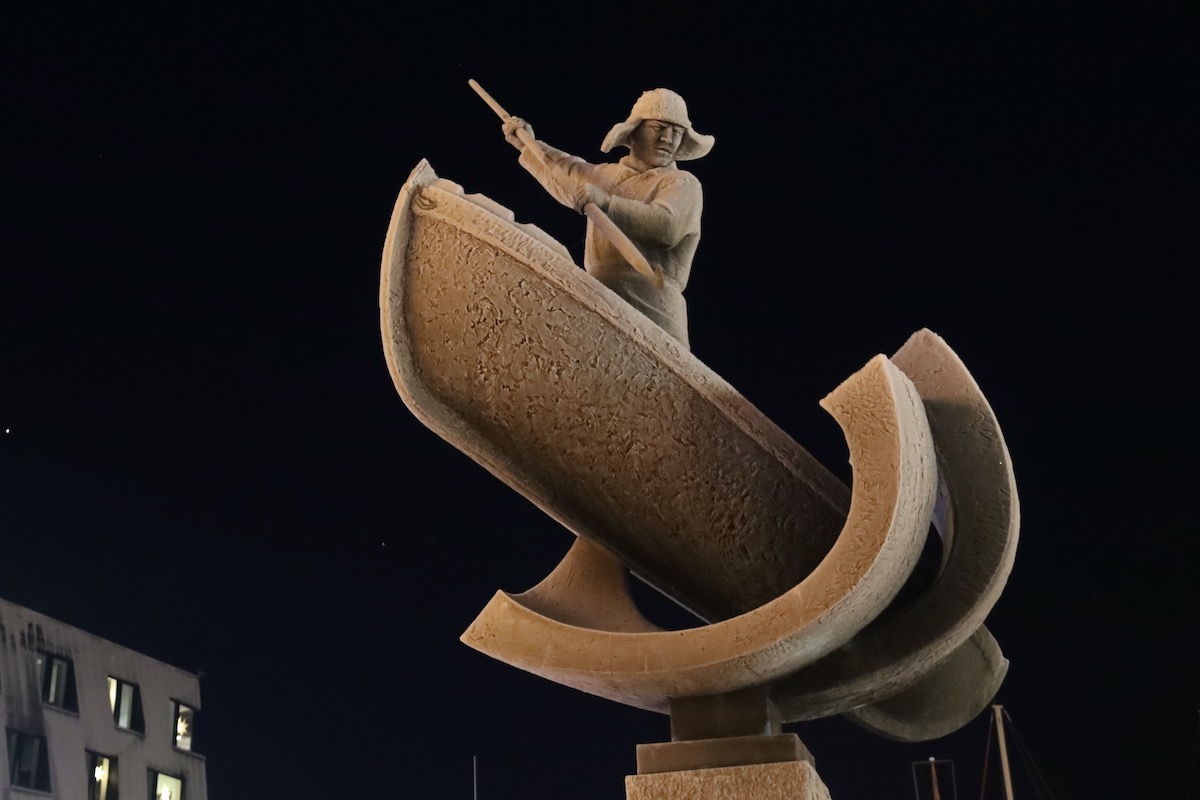 Where to Eat in Tromsø, Norway

Bardus Bar and Bistro is on Cora Sandelsgate and offers two different menus for lunch and dinner using only local ingredients. Their homemade sorbets are exquisite. 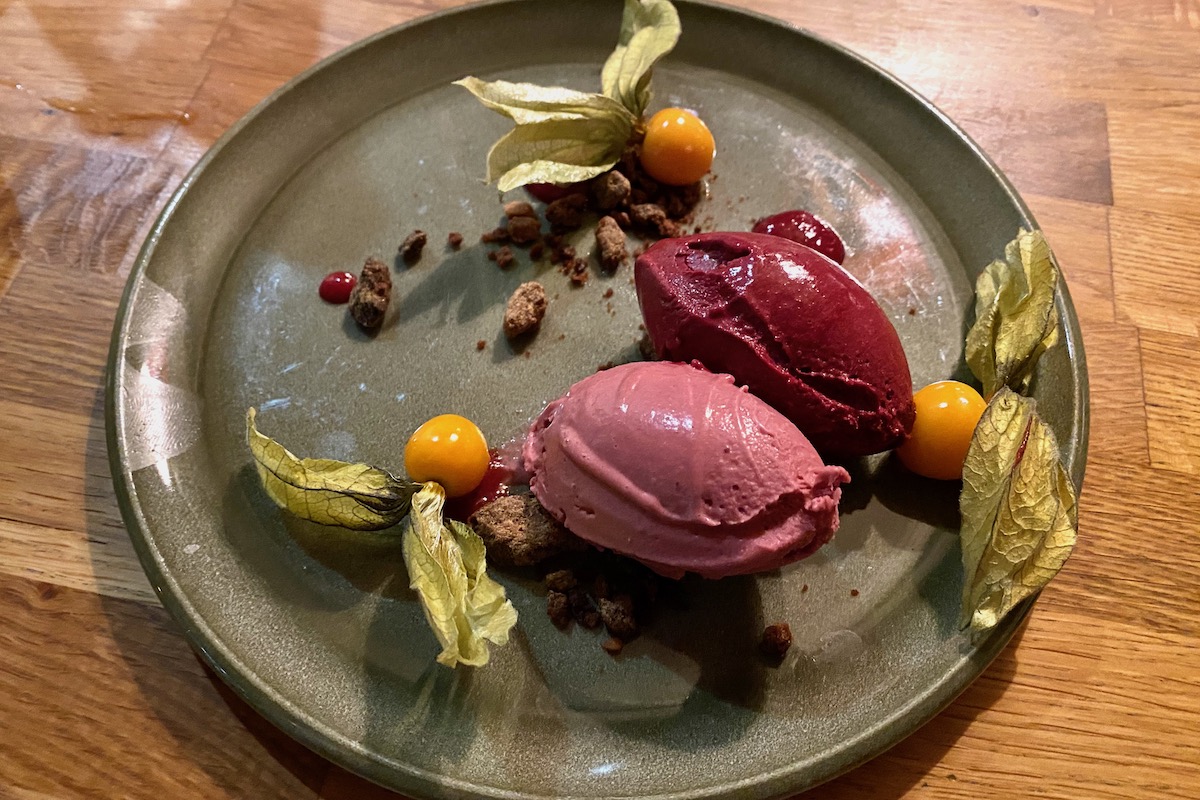 The windows of the cosy book-lined dining room look out on the extraordinary building that houses the public library of Tromsø. It was built under the original roof of the old Fokus Cinema. The unusual roof structure is known as a Candela shell and after the original designer the Mexican architect Candela. This building is popular as a meeting place for the locals and has become a tourist attraction as well. 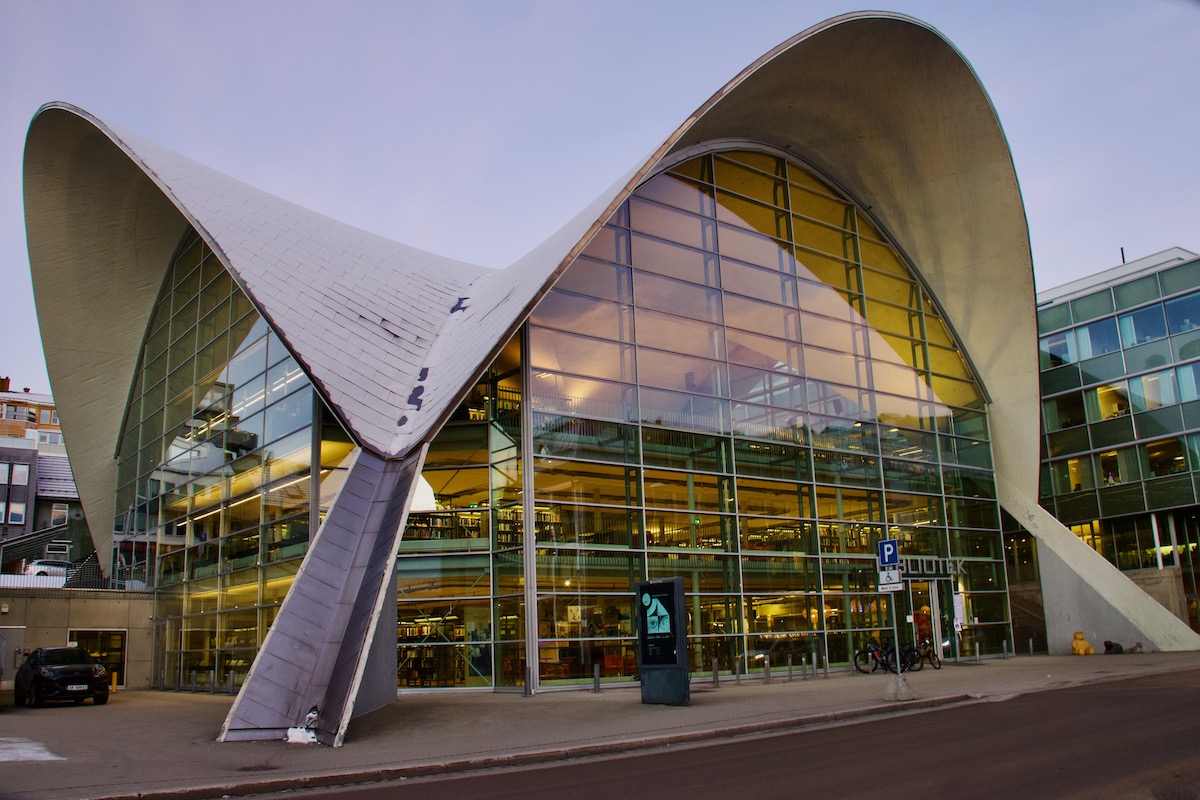 Tromsø Tapas on Stortorget offers a good selection of delicious tapas – larger than the traditional tapas popular in Spain they showcase local produce including crab and mussels. A tasty Arctic take on a traditional dish and highly recommended. 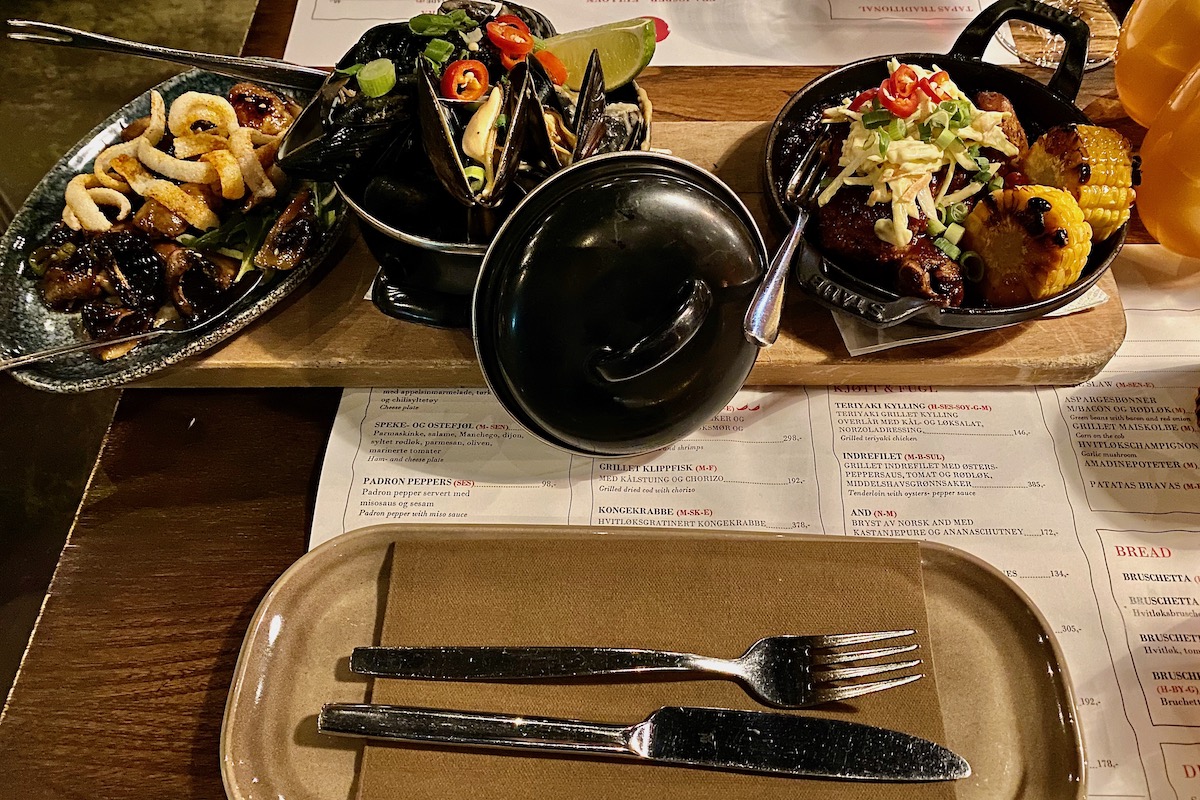 Beyond Tromsø in Norway

Some enchanting and informative excursions are available from Tromsø. These include a day out with the Sami. These nomadic people have their own culture based on their traditional activities of reindeer herding, fishing and foraging. Whale watching is a popular activity as well. But, of course, the magic everyone wants to experience when in Tromsø is the sight of the Northern Lights dancing across a black, night sky. Despite the light pollution in the city centre they can sometimes be seen from there so keep an eye on the sky after dark and the magic may continue. 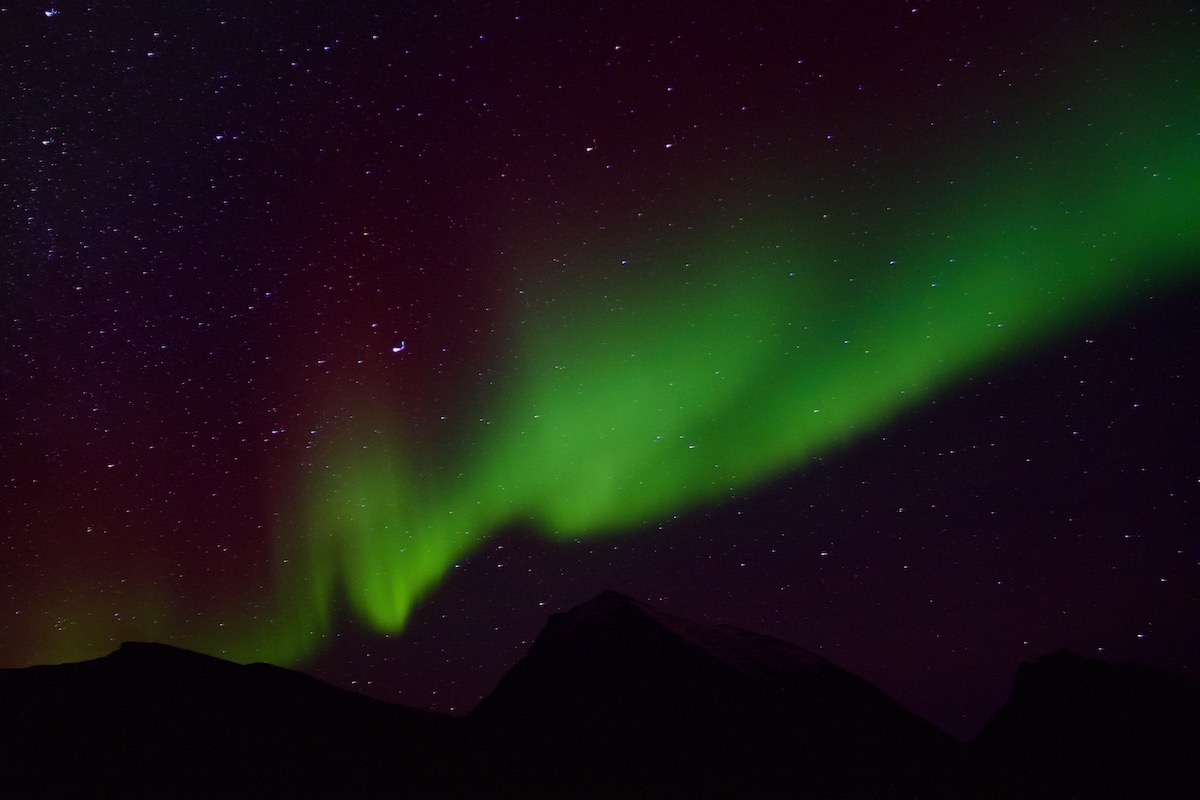 Getting to Tromsø and getting around Tromsø

Norway’s leading domestic airline, Widerøe, offers daily flights from London Heathrow to Bergen and twice daily flights from Aberdeen to Bergen. It also offers several daily flights from Bergen to cities including Trondheim, Tromsø and Bodø, offering great opportunities to combine trips to the fjords and to the north of Norway. Tromsø is also a stop on the Hurtigruten cruise route which originates in Bergen. 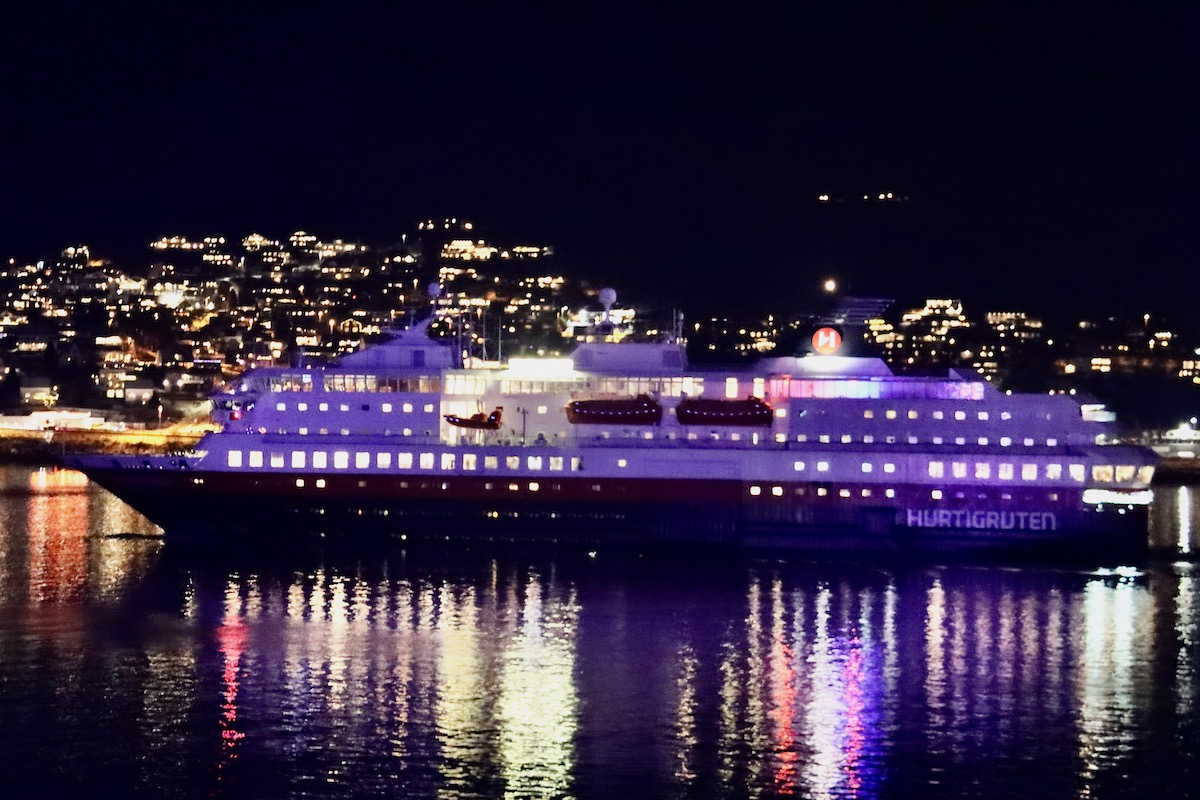 To make the most of your visit, buy a Tromsø Pass includes all public transport and free or discounted entry to many attractions.

For more information about the attractions mentioned in this feature see the Visit Tromsø website.