Romsey: A Town on the Famous River Test

The historic market town of Romsey lies along the River Test, a chalk stream that enjoys worldwide fame for its trout fishing.

Picturesque bridges cross the Test as it flows through the town of Romsey. One of its tributaries, Fishlake Stream, trickles down some of its streets so the residents have to cross it to reach their houses. Some of these houses, in particular those along Bell Street have been here since the fifteenth century. At the very heart of Romsey is its market place. 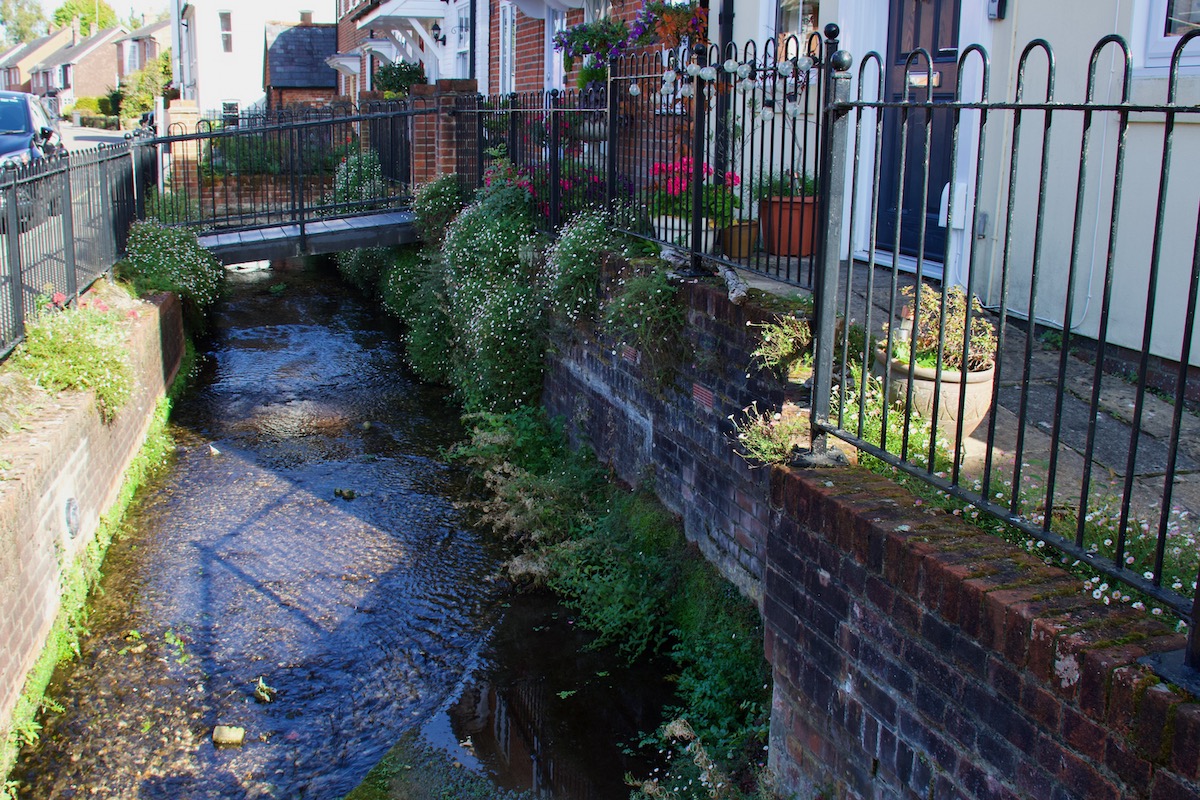 The Market Place in Romsey, Hampshire

Overseeing the Market Place is Romsey’s most famous resident, Lord Palmerston, a former Foreign Secretary and Prime Minister during the early nineteenth century. His family name was Temple and his family home was Broadlands, a large estate surrounding Romsey. However, the most famous resident of Broadlands was Earl Mountbatten, a Supreme Allied Commander, Viceroy and Governor-General of India. He was assassinated by the IRA in 1979. The Broadlands Estates are still owned by the Mountbatten family and is only open to the public for a limited period during the summer. On one side of the Market Place is the quaint King John’s House.

King John’s House is tucked away at the end of the alley down the side of the Visitor Centre. There are three historic buildings on this site. The medieval King John’s House which was actually built after King John himself died. Romsey Abbey owned this building until 1539 when its nunnery was dissolved. A sixteenth century extension to the house is occupied by a Tudor Cottage and a Victorian Museum. The cottage features a tea room that overflows into the pretty garden that surrounds it. 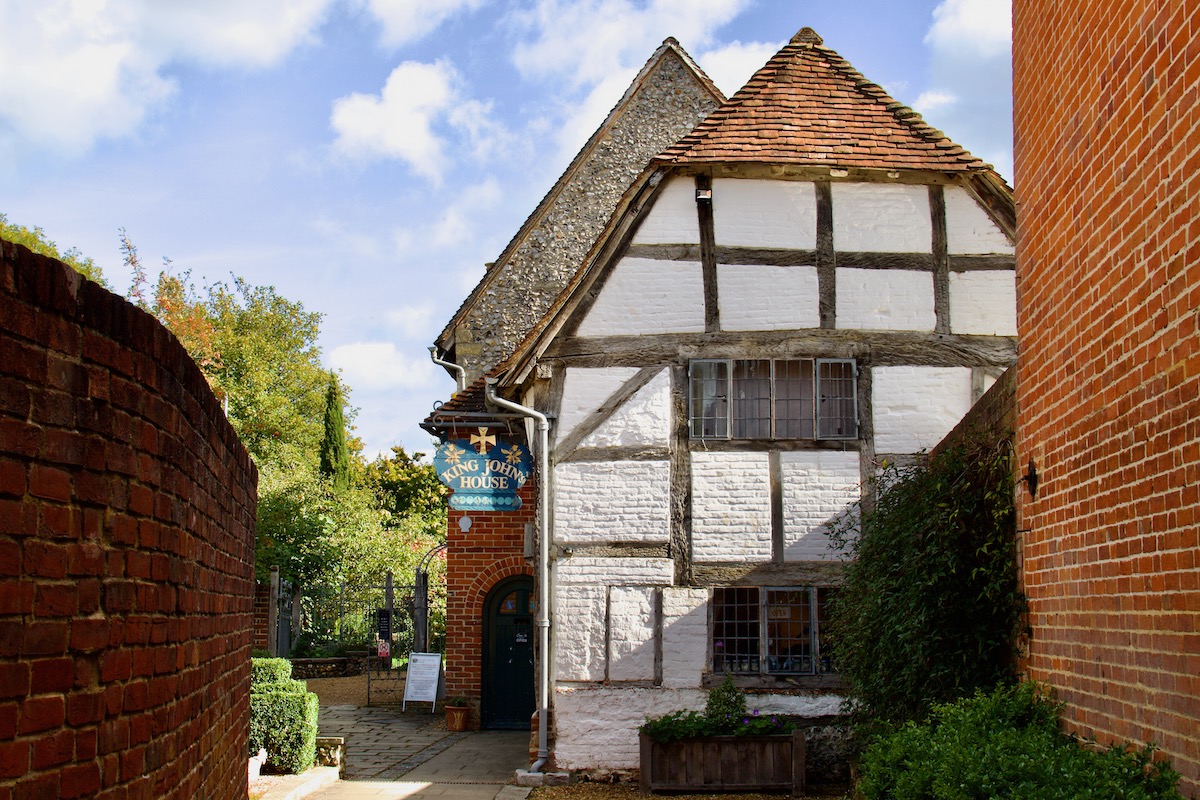 On the opposite side of the Market Place is the Romsey Town Hall which opened in 1866. This typical Victorian civic centre housed the Country Court and the administrative offices. Although the interior has changed over the years to suit different purposes it still retains the two main rooms, a Court Room and a Council Chamber. The small holding cell once used for prisoners waiting to go into court is so small it is only fit to be used as a broom cupboard. Romsey Council still has its offices in this building which is also used by the local history society and available for civic functions, community events, weddings and markets. 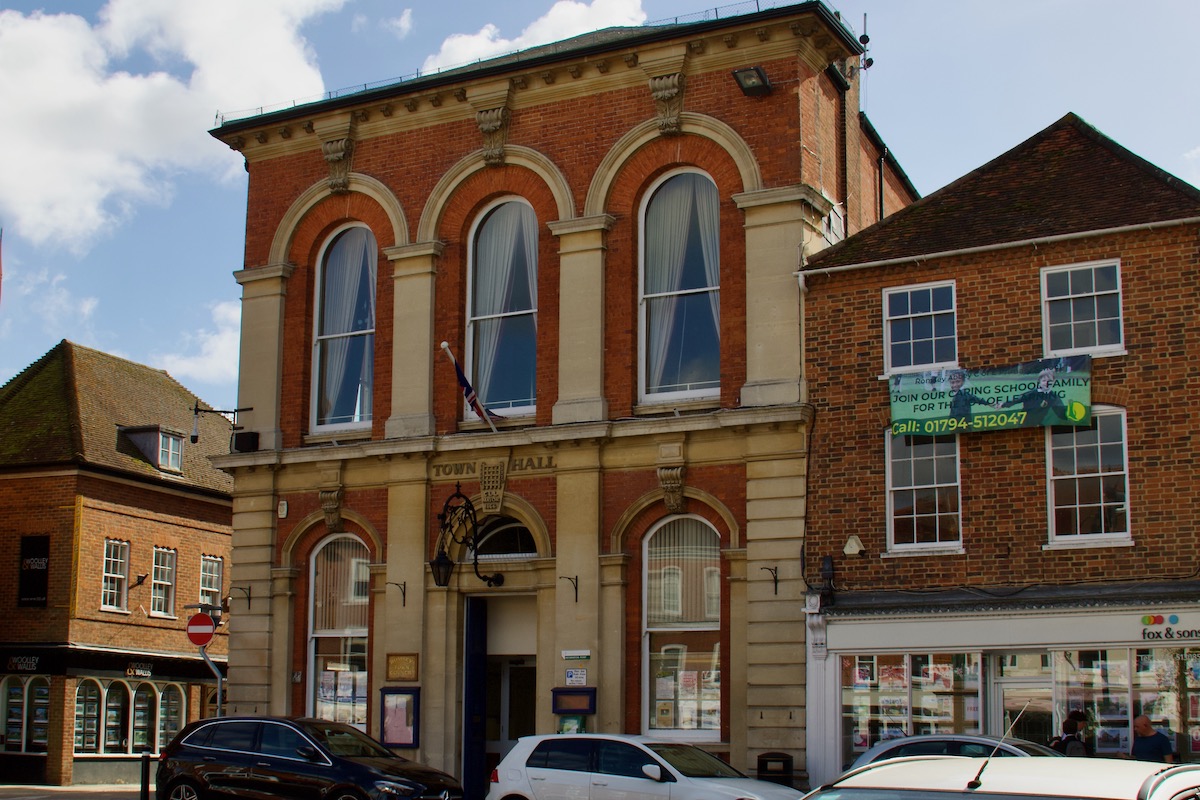 Markets have been a regular feature in Romsey since the eleventh century. The tradition continues with weekly markets in the Market Place and the Corn Exhange. The Hampshire Farmers’ Market is held here on the first Sunday of every month. Stalls at this popular market sell high quality produce and handicrafts made in the local area. The Corn Exchange was built in 1864. This two-storey stucco block now houses a bank. 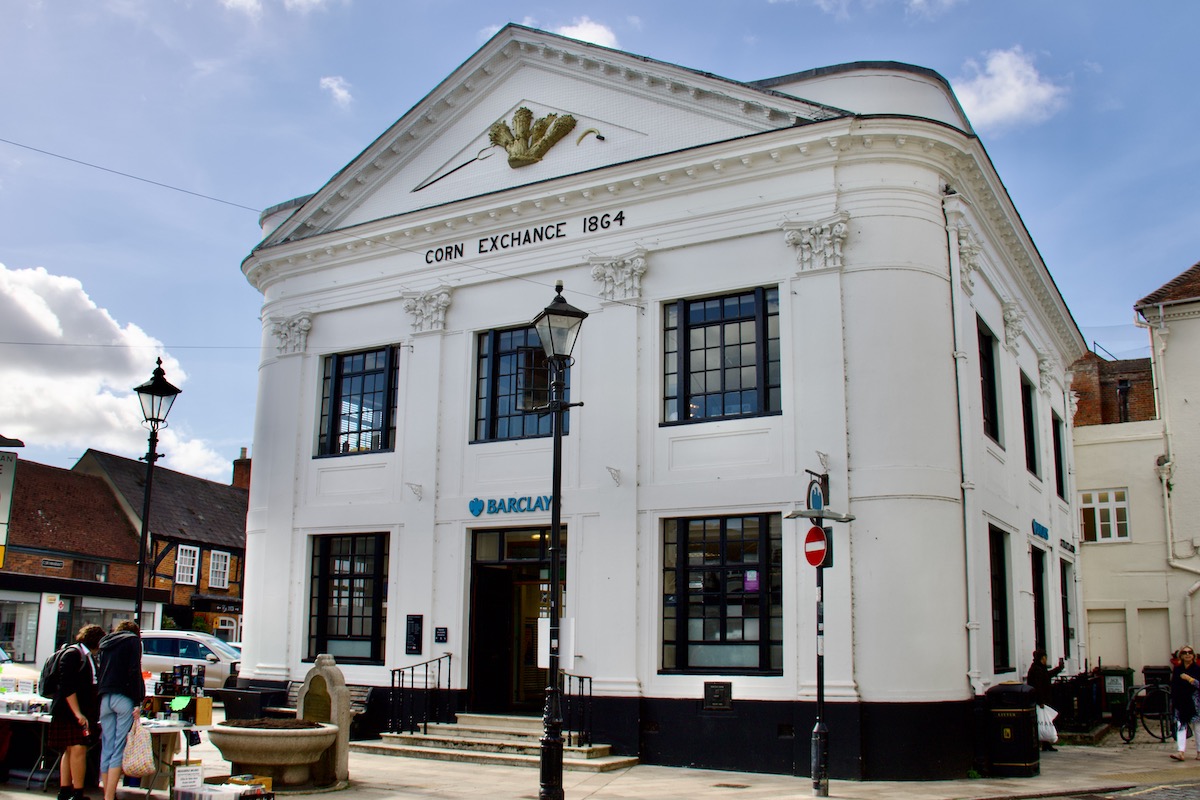 The Abbey in Romsey, Hampshire

Romsey Abbey is considered to be one of the finest examples of Norman architecture in England. It dates back to 907 AD when its nunnery was established by King Edward the Elder (son of Alfred the Great). The original building was replaced by a stone church around 1000 AD and the daughters of royalty and the nobility were educated here. It has survived all the disasters of the past centuries including the English Civil War and today it is the largest parish church in Hampshire. A new addition to the interior is a stunning stained glass window depicting Florence Nightingale as a young lady. 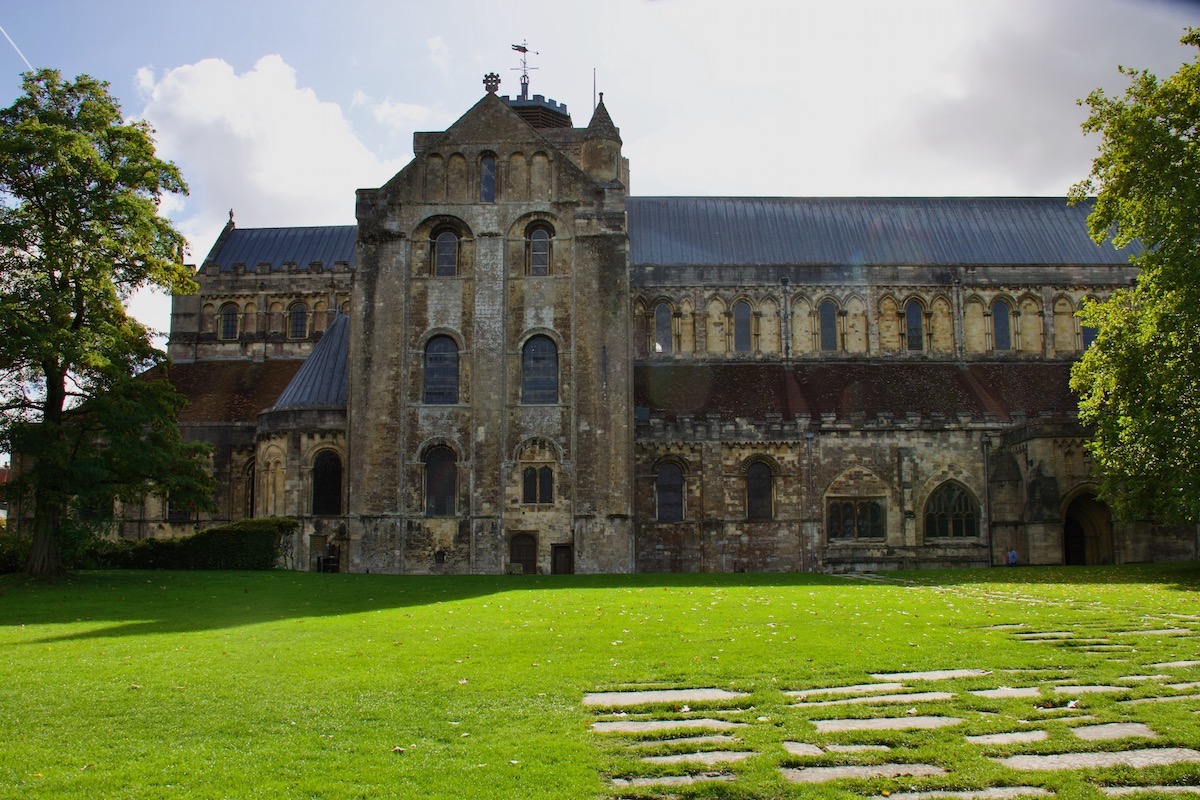 Surrounded on three sides by the River Test, the Memorial Park was created in 1920 as a traditional public park. This beautiful green space is ideal for strolling or just sitting on a bench watching the world go by. This park features a war memorial, a bandstand and a Japanese field gun. The latter was donated by Lord Mountbatten who was given the gun on the surrender of the Japanese forces. 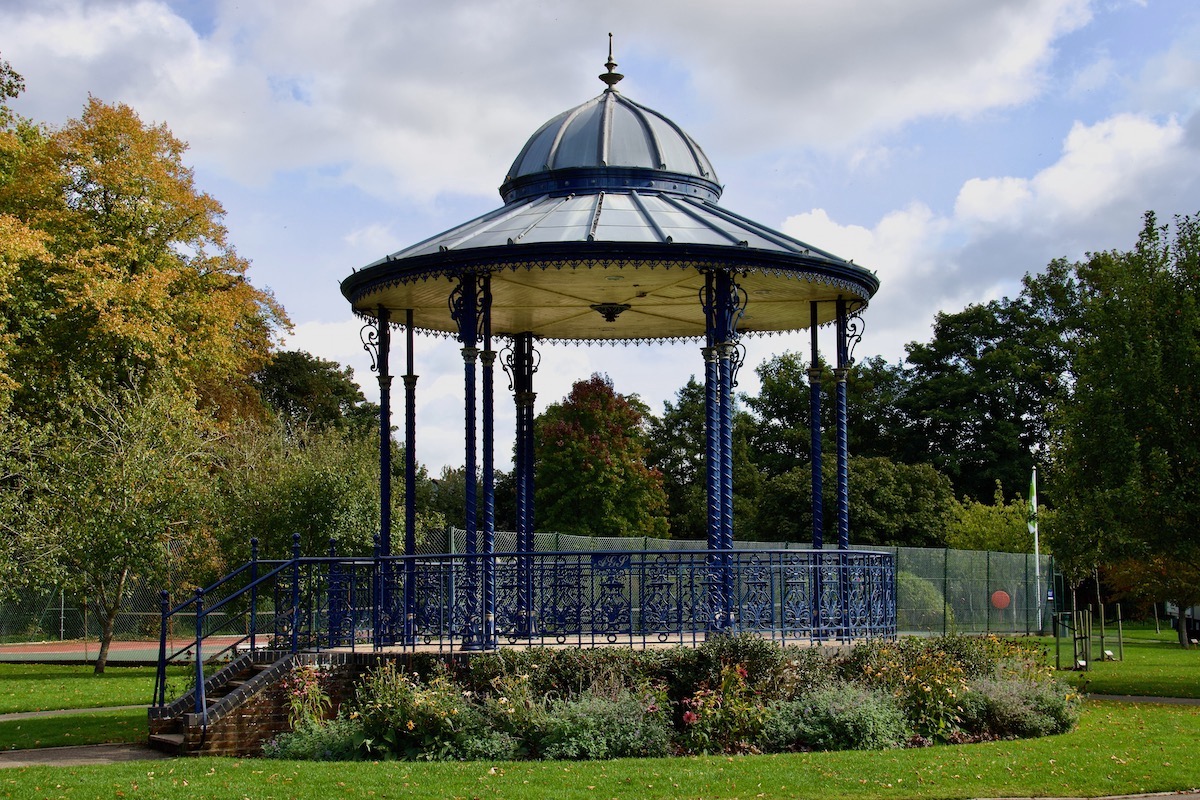 A real highlight of this War Memorial Park is the War Horse. A sculpture of a soldier with his horse commemorating Romsey’s role during the First World War. The Romsey Remount Depot was a training centre for horses from England, Ireland and America before they were shipped to France from Southampton. The depot buildings were demolished after the war and the resulting hard core was used to raise the ground where the park now stands. There is a footpath from this park that leads to Sadler’s Mill on the River Test. 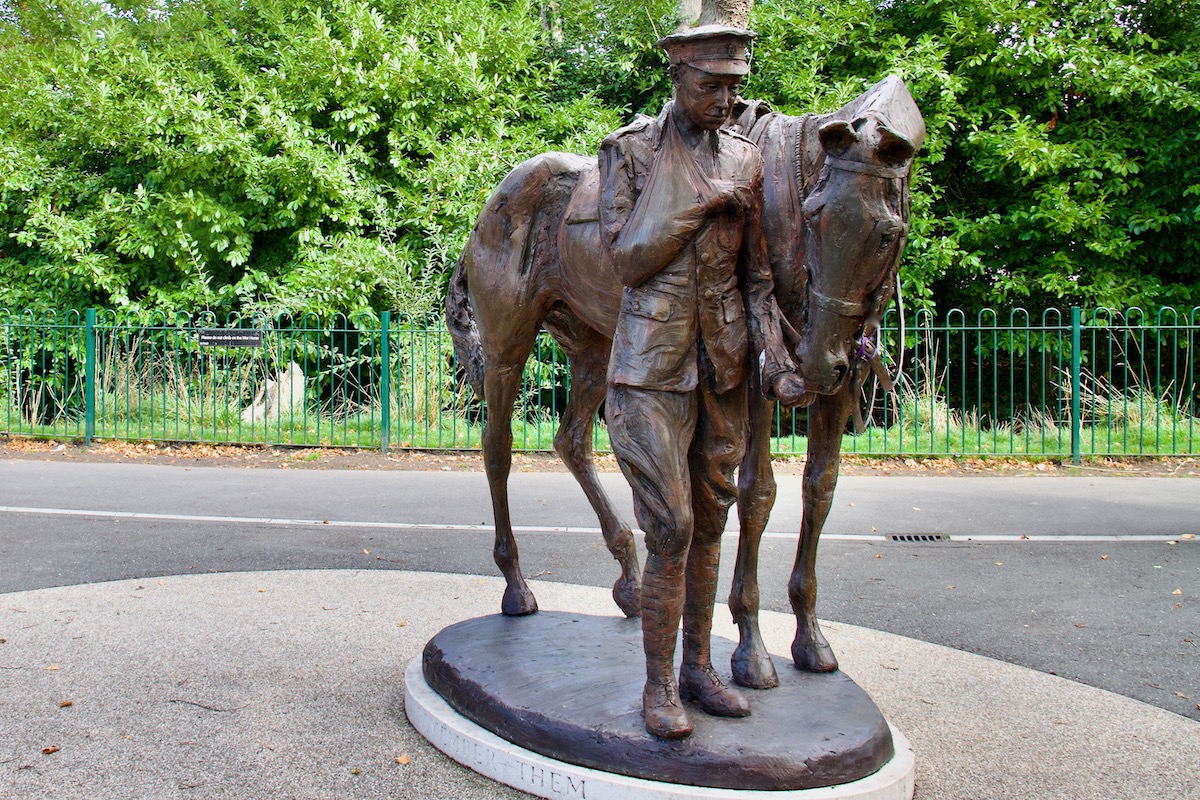 Sadler’s Mill on the River Test in Romsey, Hampshire

Documentation suggests there has been a mill on the site where Sadler’s Mill now stands since the sixteenth century. However, very little is known about that mill. It is known that this mill was part of the Spursholt estate which was bought by the first Lord Palmerston. He organised a total re-build of the mill in the 1740s which was when it became known as Sadler’s Mill. It was operational until the 1930s when water-powered mills became uneconomic due to the advent of power driven mills. During the Second World War it was converted to a hydro-electric generating plant as a back-up electricity supply for Broadlands. The building is now solely residential. At one time crowds would flock to this beauty spot to watch the salmon leaping through the mill race but this stopped around 2000 when the water flow was altered. 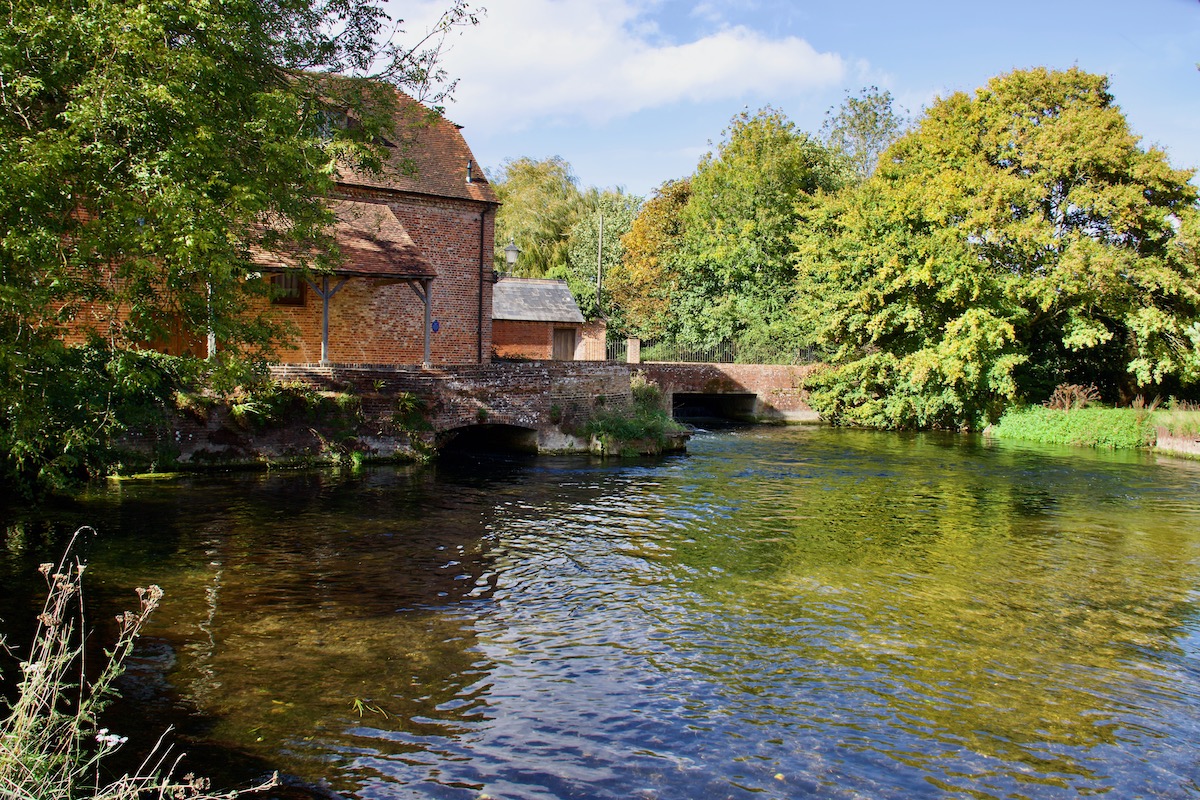 Romsey does have some architectural gems in the medieval streets around its Abbey. Number 21 Middlebridge Street is a fifteenth century building that is typical of that era. The upper storey extends out over the ground floor. 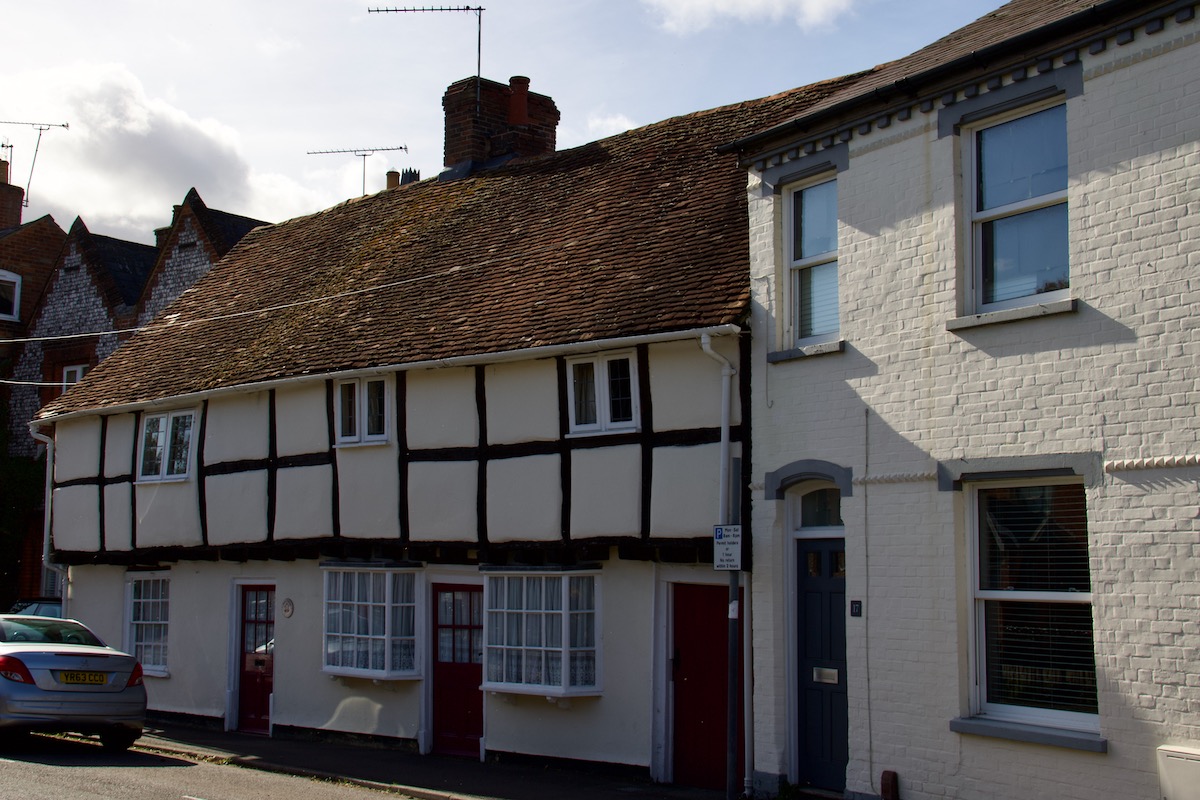 On the road known as the Abbey is a row of charming terrace houses. Although they have a Regency façade the buildings themselves are medieval. Just around the corner from these buildings are the Temple Buildings (Temple was the Palmerston family name). The sundial was added in the 1920s. 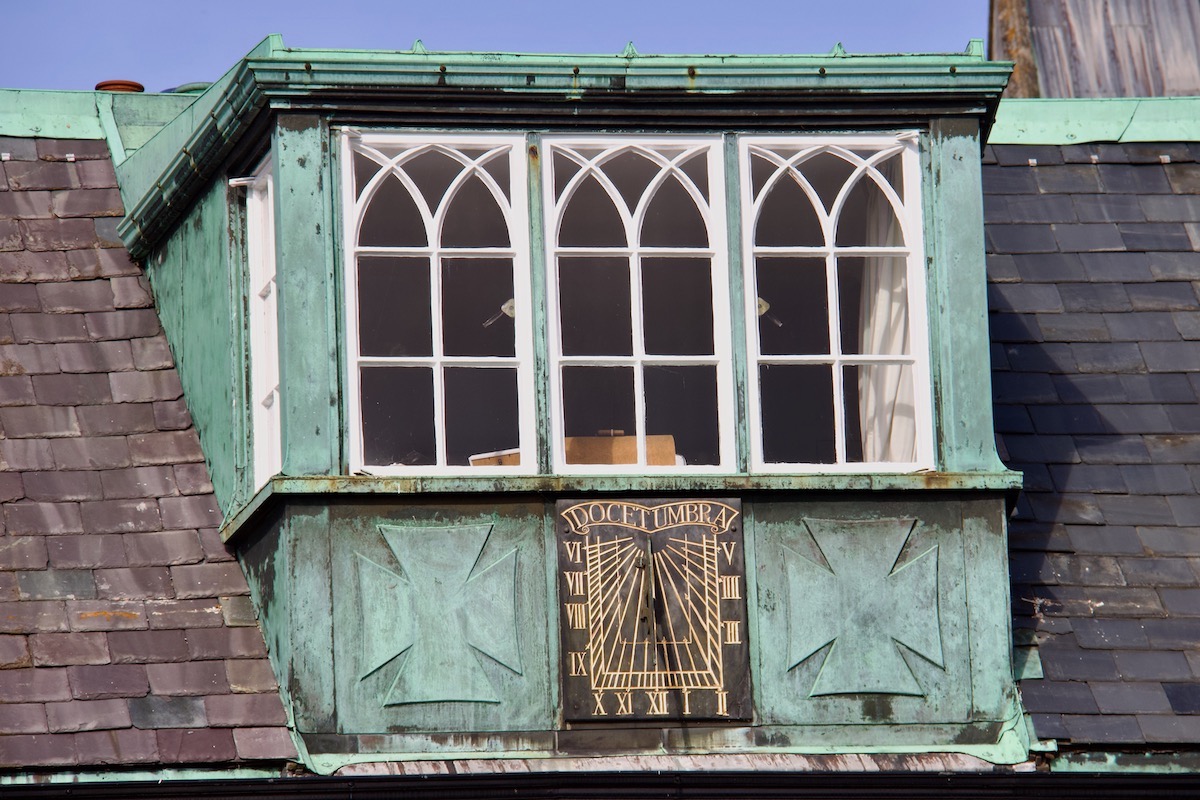 Shops and Cafés in Romsey, Hampshire

Bradbeers Department Store in the Market Place is a real trip down memory lane for those who remember the old-fashioned department stores purveyors of all goods imaginable. This family business was founded in 1837. It started as a drapery store but over the years, fashion, furniture, homewares and fragrances have been added to the business. The founders, Mr Smith and Mr Bradbeer were retailing pioneers and keen to expand independent retailing on the High Street. An aim that motivates all the independent retailers in the town. 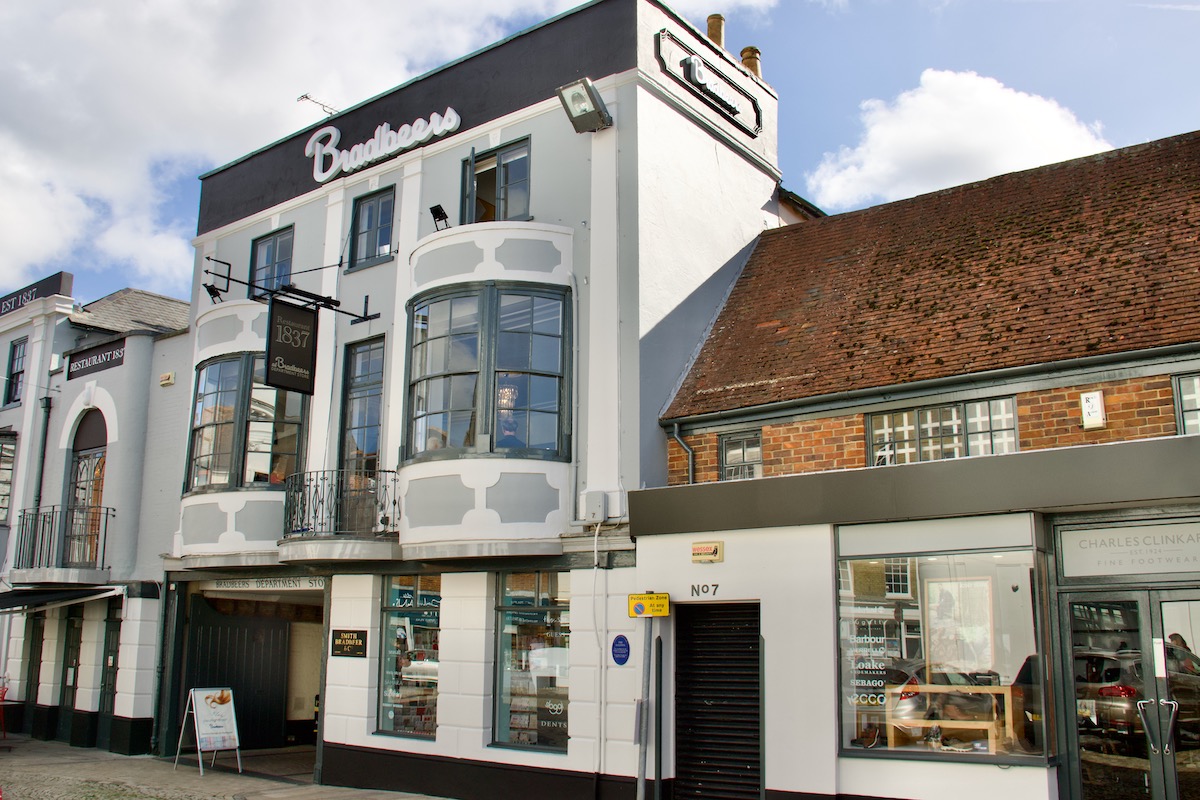 Café culture is popular in Romsey and its Market Place of Romsey is ringed with small, cosy cafés. Something for everyone from the tea room in the Tudor Cottage behind King John’s House to the Courtyard Coffee Shop at Bradbeers. 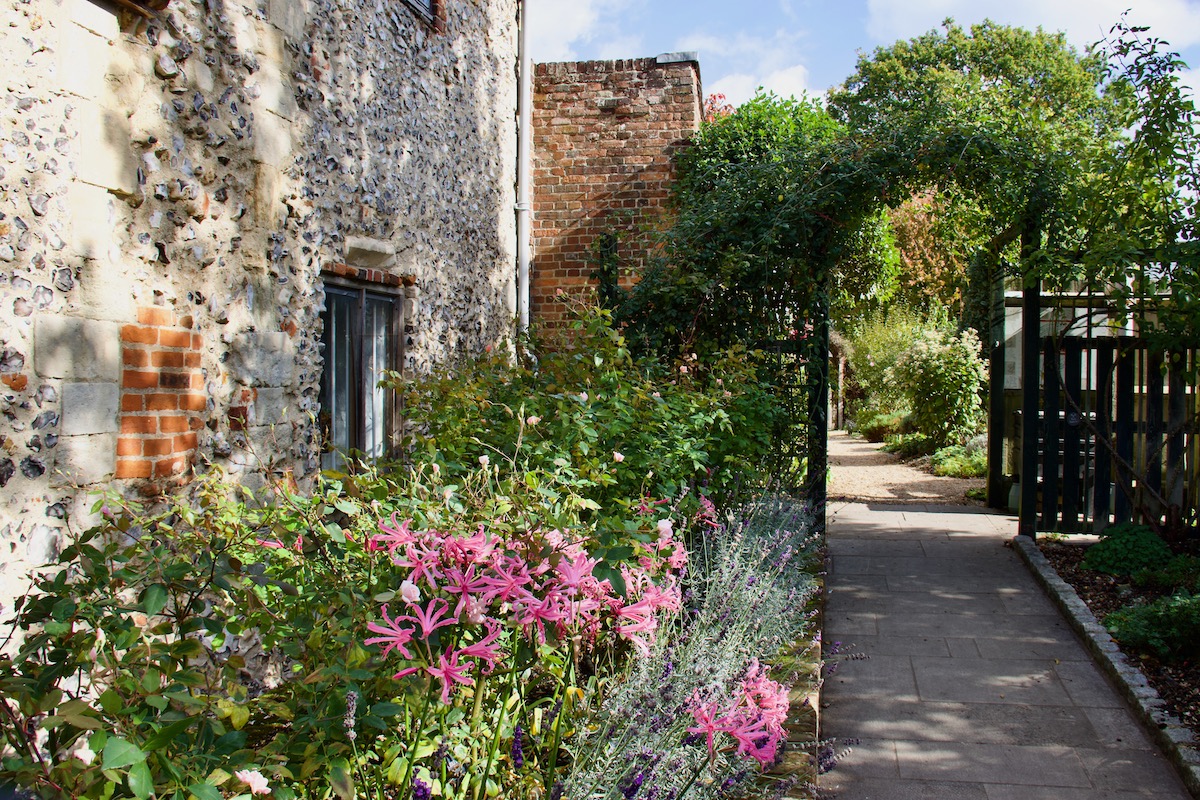 Visitors who would like to learn more about the history of Romsey and enjoy some more architectural delights should follow the Romsey Heritage Trail. A copy of this walk can be obtained from the Visitor Information Centre, King John’s House and The Town Hall.

Where to Stay in Romsey, Hampshire

Potters Heron is just outside Romsey on the main road between Romsey and Winchester. A regular bus service runs between the two towns along this road. Potters Heron offers comfortable, quiet rooms as it is set back from the road. It also features and large restaurant with secluded dining areas as well as a pub. This hotel is ideal for family gatherings and small groups enjoying a staycation in Hampshire. 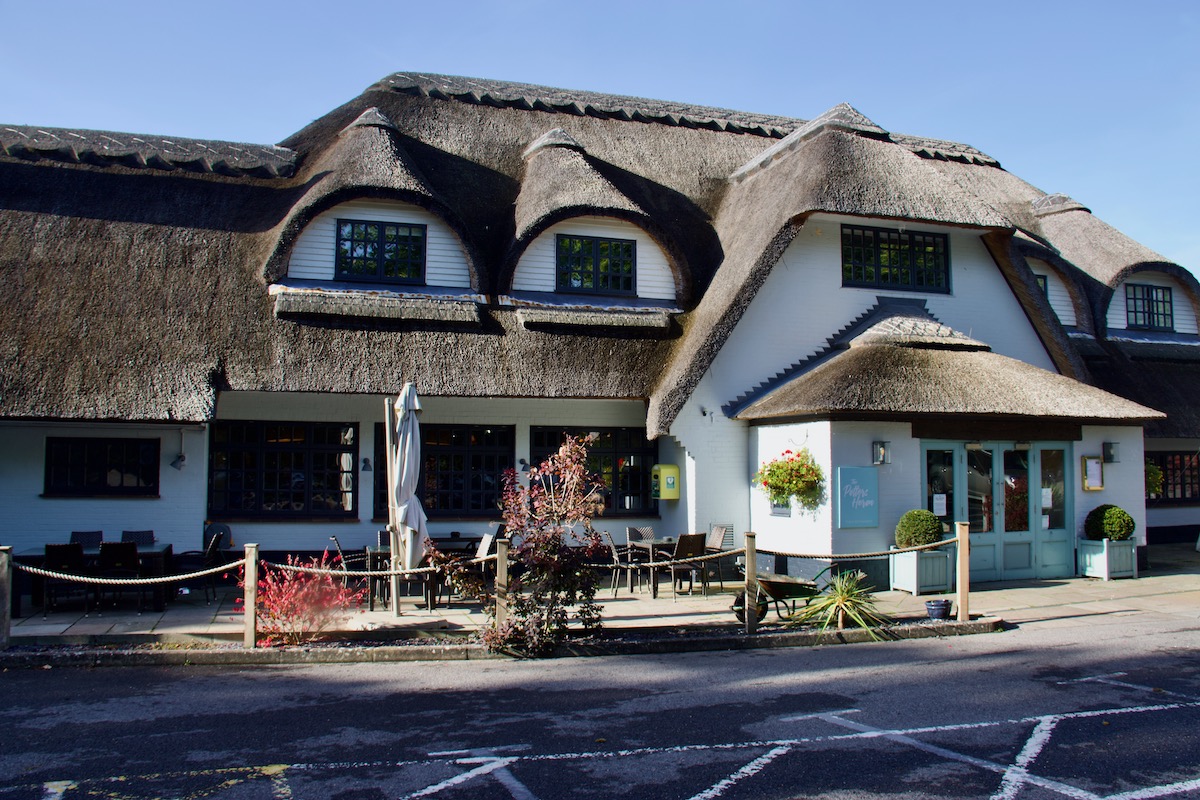