Puerto de la Cruz in north of Tenerife is the oldest and one of the most popular seaside resorts in the Canary Islands. I want to see why it is.

This former port of La Orotava is famous for its jagged coastline of black volcanic rocks surrounding the famous swimming pools of Lago Martiánez created by the famous Spanish artist and architect César Manrique in 1977. I started my exploration of Puerto de la Cruz on its sea front but turned away from the artificial lagoons preferring to walk along the stunning natural coastline. 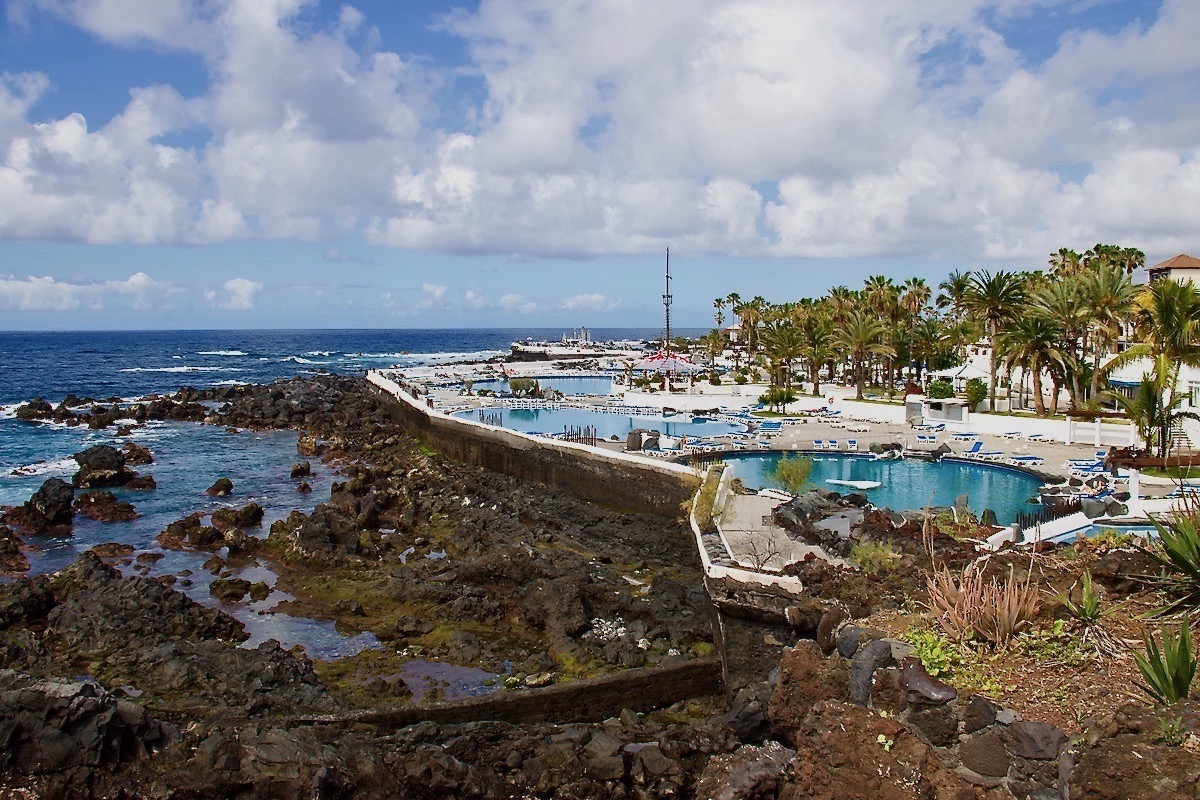 Overseeing all the activity along the busy sea front is the pretty church of Nuestra Señora de la Peña de Francia in Iglesia Square. It was built in 1697 and today it is the most important religious building in Puerto de la Cruz. The artistic value of this church is continually being enhanced by donations from its own congregation. 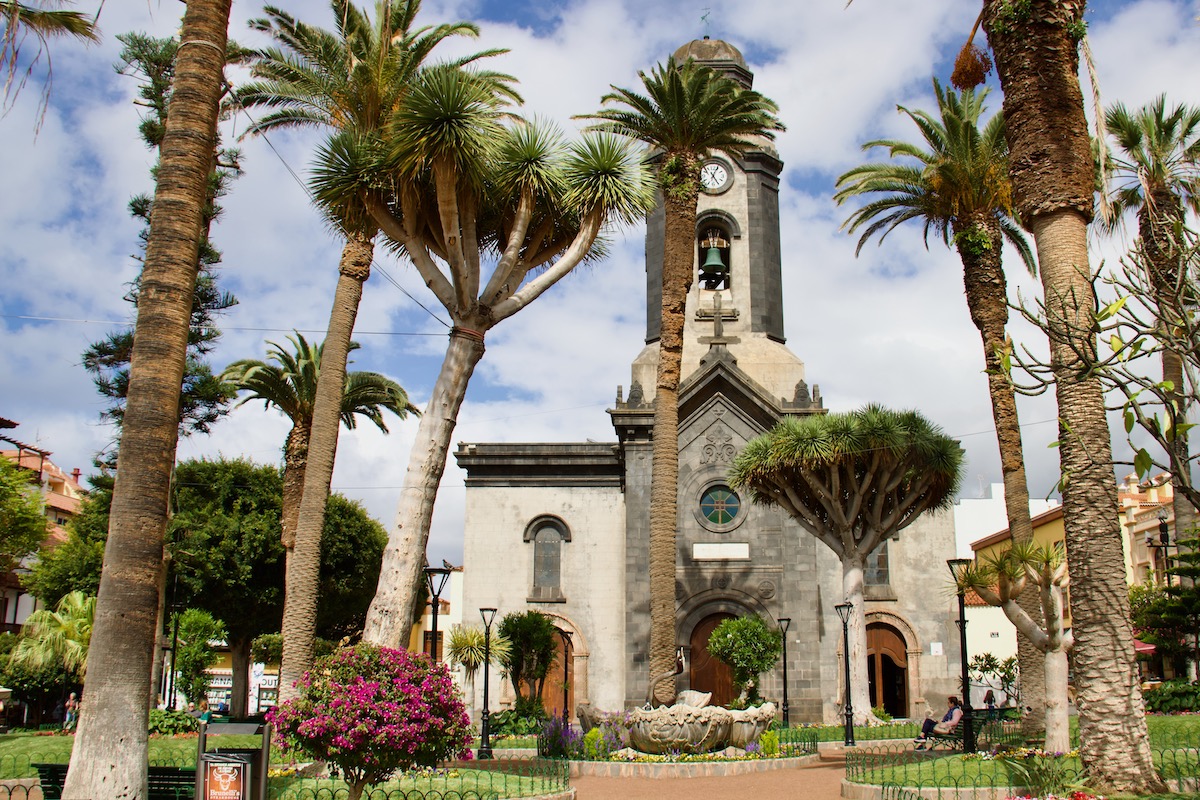 The long promenade winding along the sea front offers many opportunities to pause and watch the waves crashing onto the black rocks below. As the sea recedes large, natural pools appear. Bathing in these pools is encouraged by the provision of paths and ladders assisting entry into the shimmering blue water. 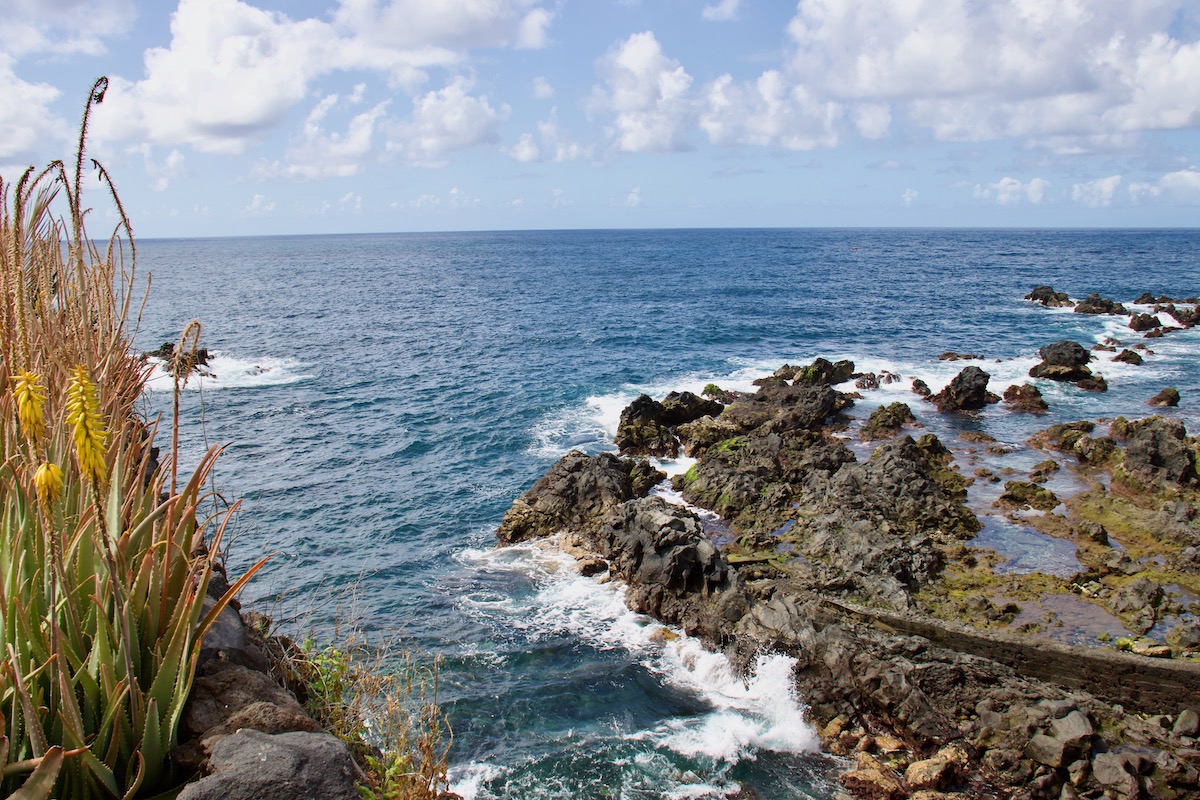 On the other side of the promenade shops display their colourful goods on the pavement punctuated by the brilliant hues of sun umbrellas shading the tables of cafés. As I approach the Castillo de San Felipe I leave behind the bustle of the seaside and approach the calm of the historic centre.

The colonial style fort, Castillo de San Felipe, was built during the seventeenth century to defend Puerto de la Cruz from pirate attacks. This pentagonal building has two floors and was originally accessed across a drawbridge which has now been replace by a static path. following a long period of neglect, the castle was restored in the nineteenth century. Its many uses have included an isolation hospital and a restaurant. This rather squat building and the square beside it are used for temporary art and sculpture exhibitions and other cultural entertainments. Beyond the castle is the old fishing port of Puerto de la Cruz. 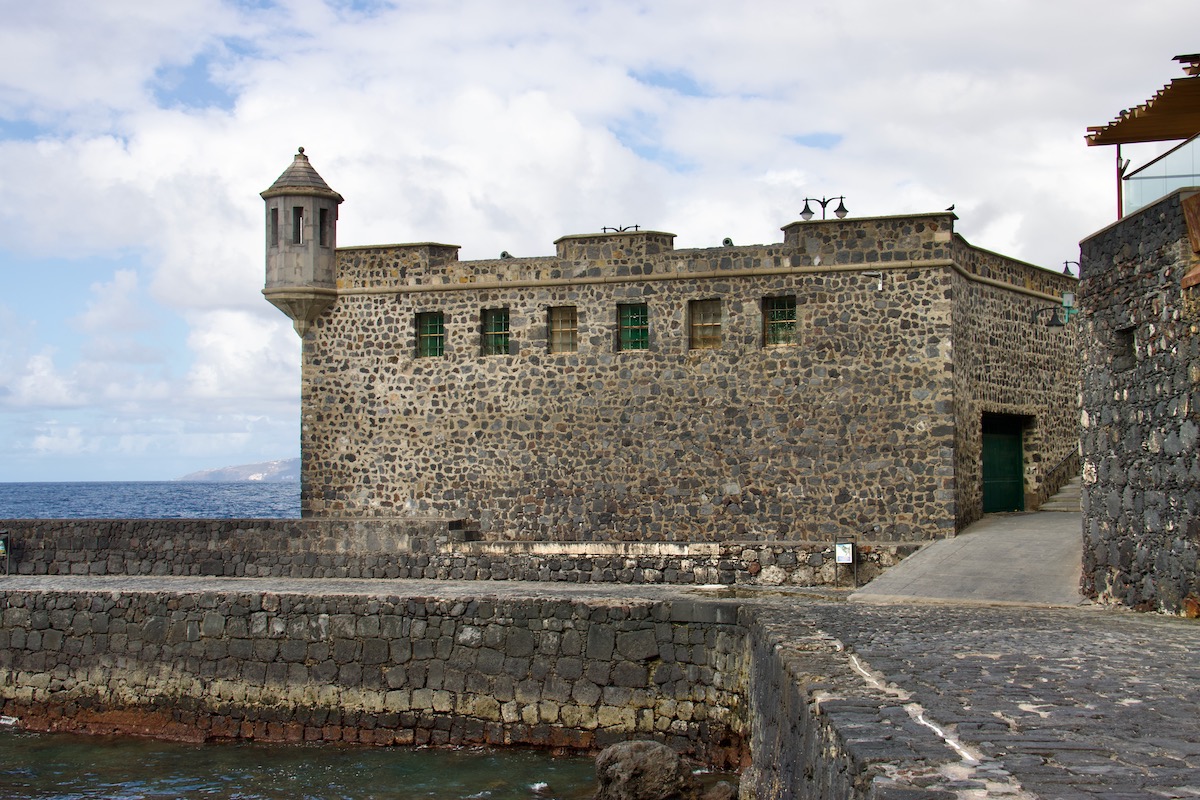 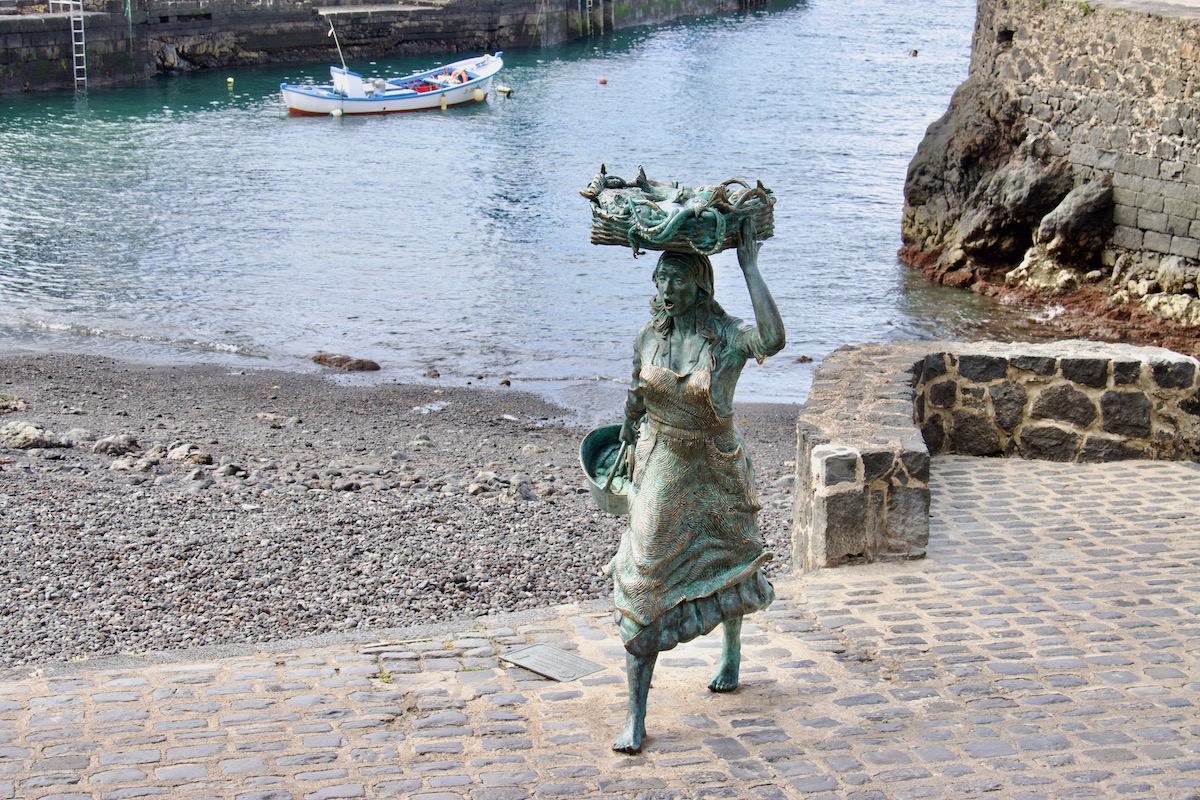 Fishing boats still operate from this small harbour which is surrounding by historic buildings many of which have the balconies for which the town has become famous. The seventeenth century Customs House is one that stands out. Today it is the cultural centre of Puerto de la Cruz housing the Museum of Contemporary Art and a crafts shop. The Cruz de La Carola is displayed on the side of the building that would have been approached by disembarking passengers. The name of the town comes from this cross, a symbol of the Christianisation of the town. 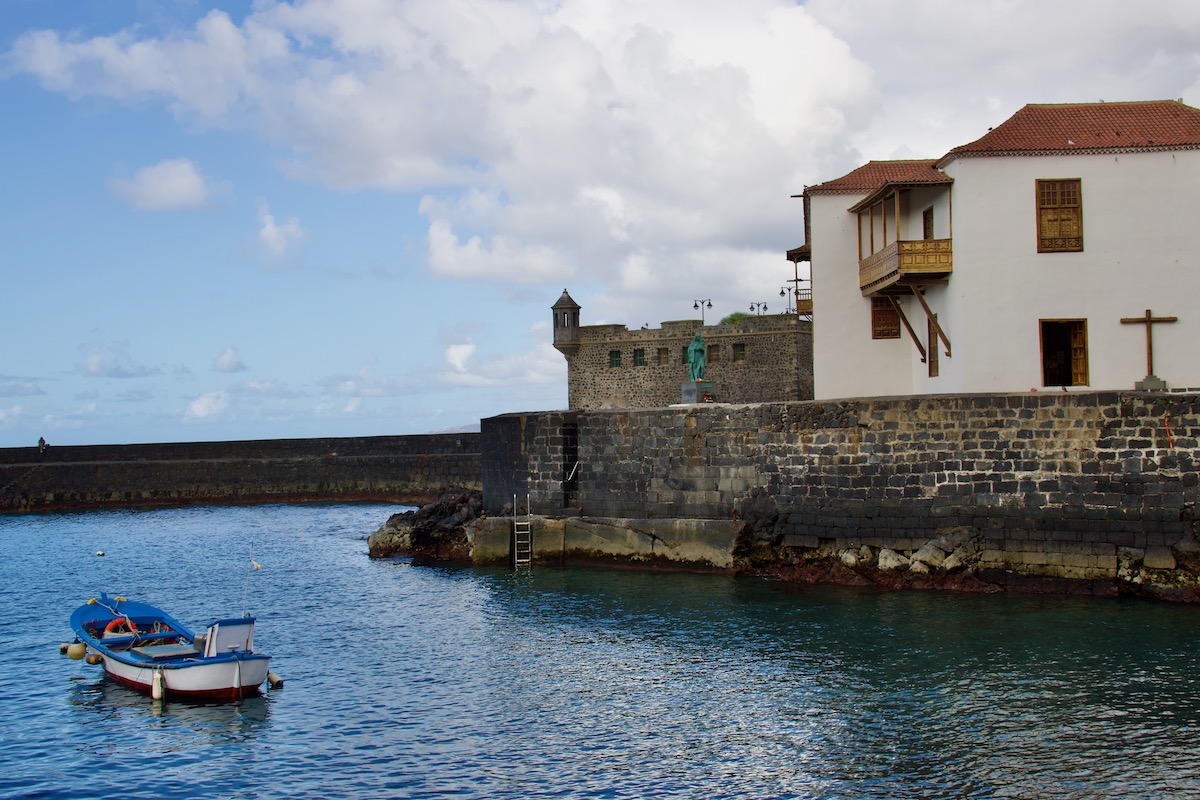 There is a popular sea wall walk around the harbour and then along the coast to the Puerto de la Cruz Lighthouse. This active, modern lighthouse on the northern coast of Tenerife is one of seven lighthouses marking the coastline of Tenerife. 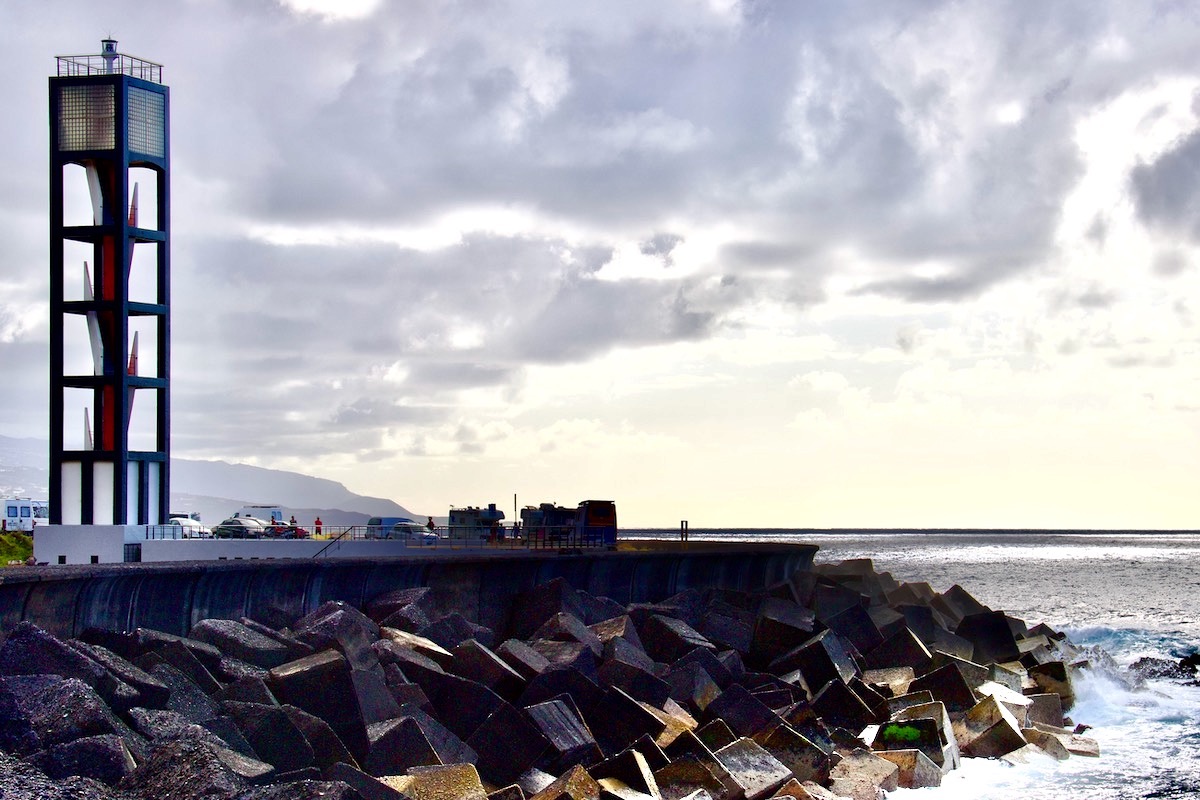 Behind the harbour is the historic quarter of Puerto de la Cruz.

The Historic Quarter of Puerto de la Cruz on Tenerife

The vibrant Plaza del Charco is the heart of the historic quarter of Puerto de la Cruz and is surrounded by historic buildings such as Casa de la Aduana, Casa Miranda and the Marquesa Hotel in the surrounding area. I wandered back through these streets to Avenida de Colon to catch the free tourist train to Loro Parq. 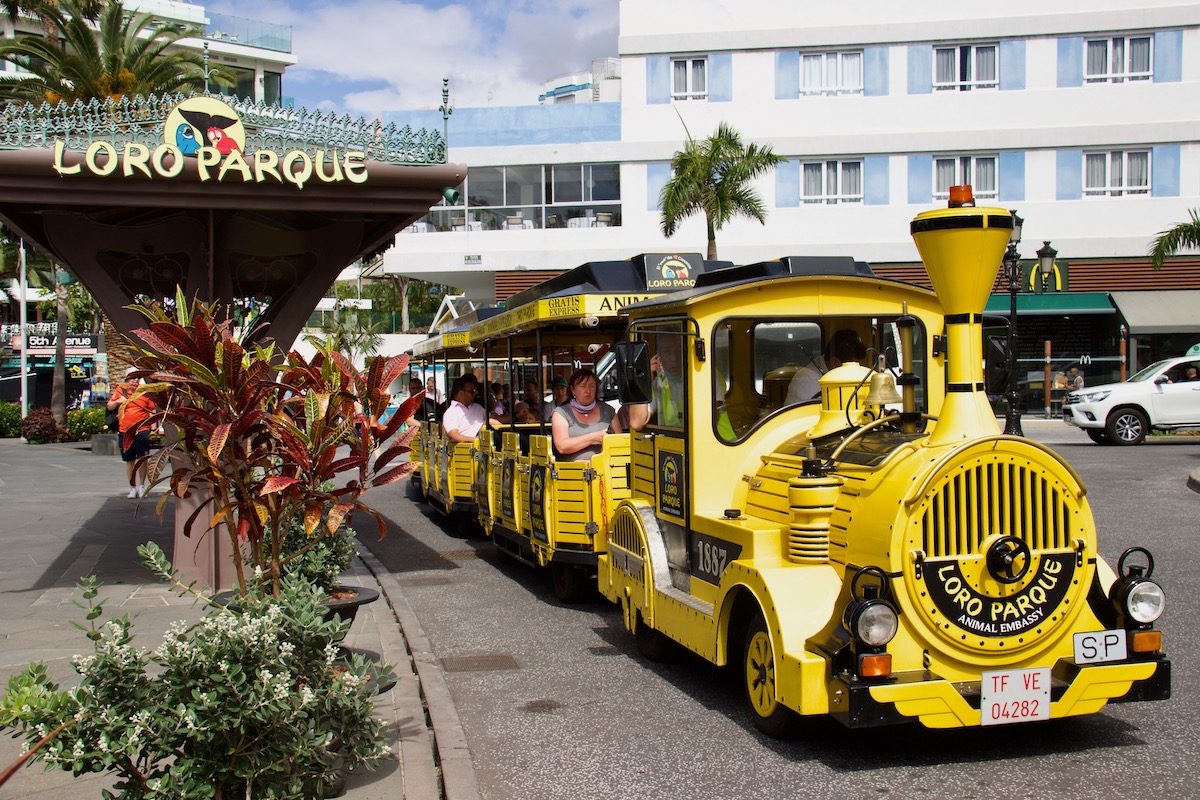 One of the most popular attractions in the Canary Island is Loro Parq, a unique park that focuses on nature and the environment as well as offering excellent family entertainment. During my visit I focused on the conservation activities in the park which has been awarded the environmental certification of the Animal Embassy. The park is home to a wide variety of animals living in a tropical environment dotted with beautiful buildings reflecting Thai architecture. Passing by one of the large enclosures I had to wander what its occupant was thinking about. 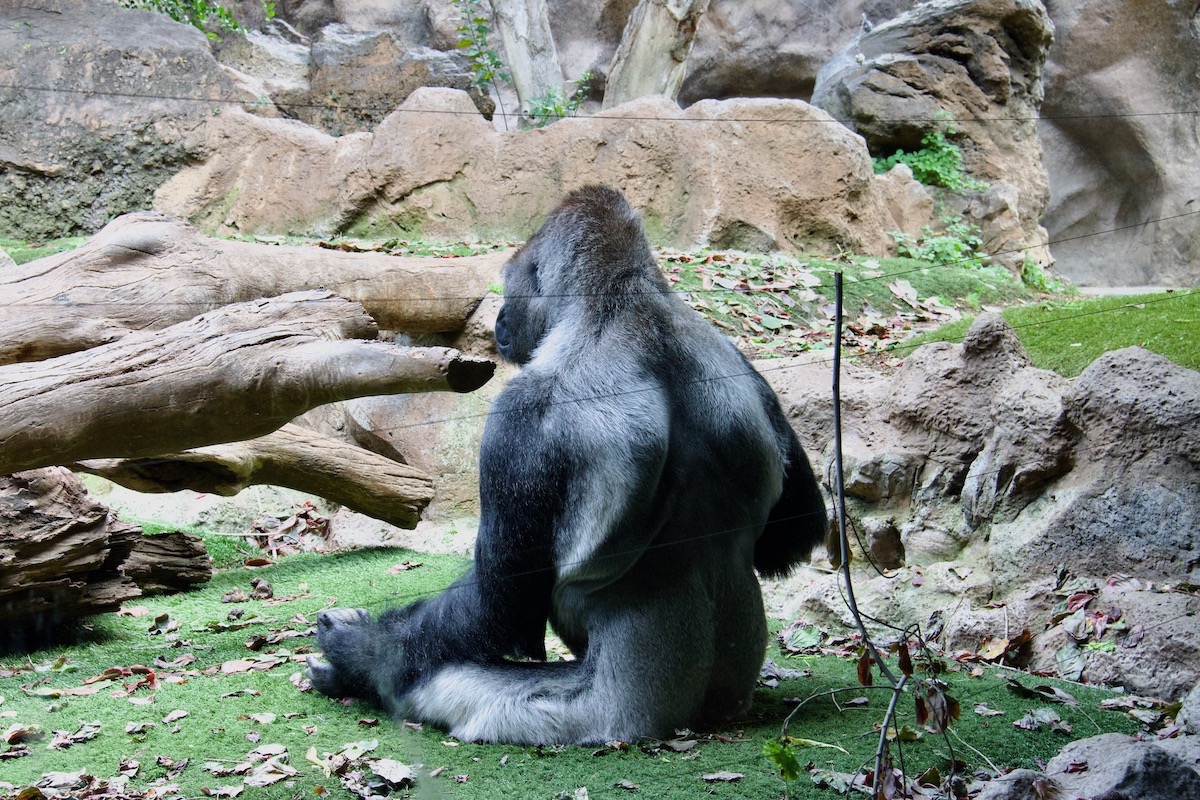 Motivation for the creation of this park was the need to preserve the parrots of the fast disappearing rain forests. A walk through a re-created forest is one of the main attractions. A wide range of parrots provide endless amusement for the visitors passing through. Other conservation work here includes rescuing damaged animals and attempting to grow coral artificially. Another attraction highlighting nature are the famous La Orotava Acclimatisation Gardens. 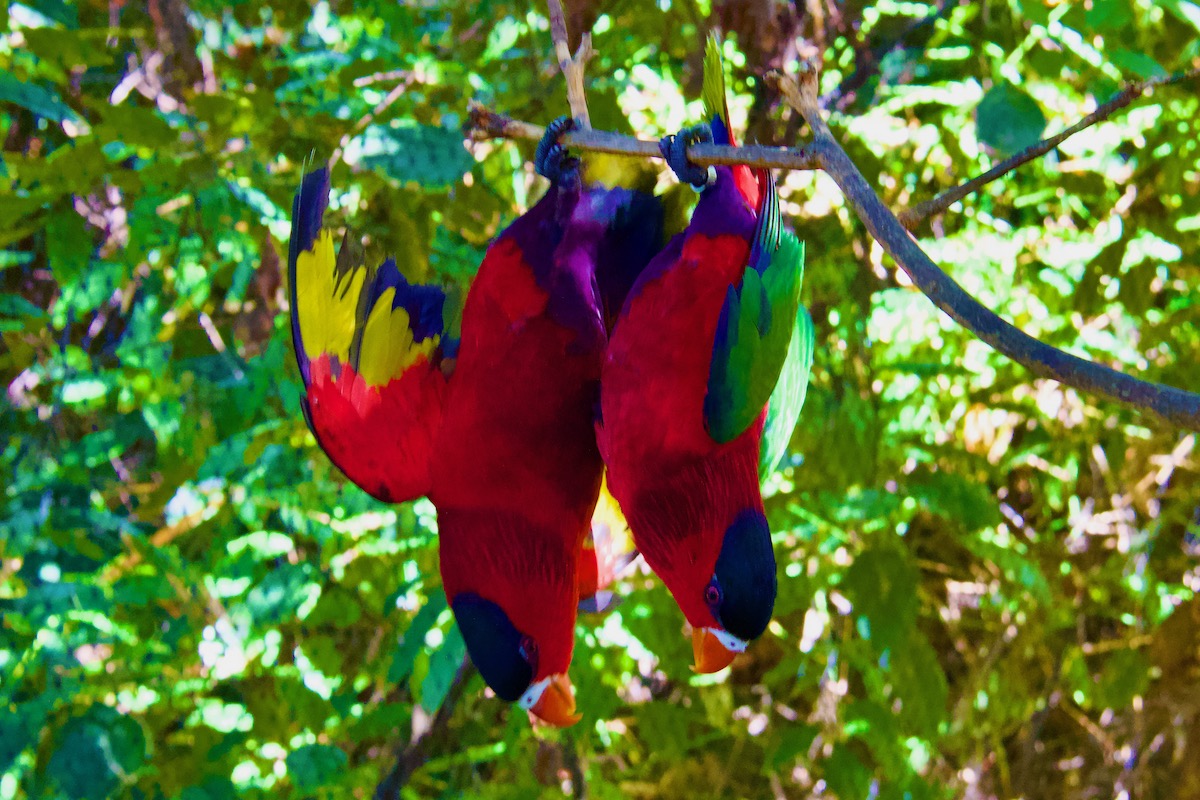 The beautiful Jardin Botánico also known as La Orotava Acclimatisation Gardens is located on the outskirts of Puerto de la Cruz. This garden was created following a Royal Order from Carlos III in 1788 to create a place in Spain with a suitable for the cultivation to cultivate species from the tropics. Inside these gardens are many plants and trees that spark interest due to their beauty, size, age, rarity or place of origin. These gardens are also a scientific institution promoting and supporting research programmes on the flora and vegetation of the Canary Islands. A central feature of these gardens is a large exhibition area. 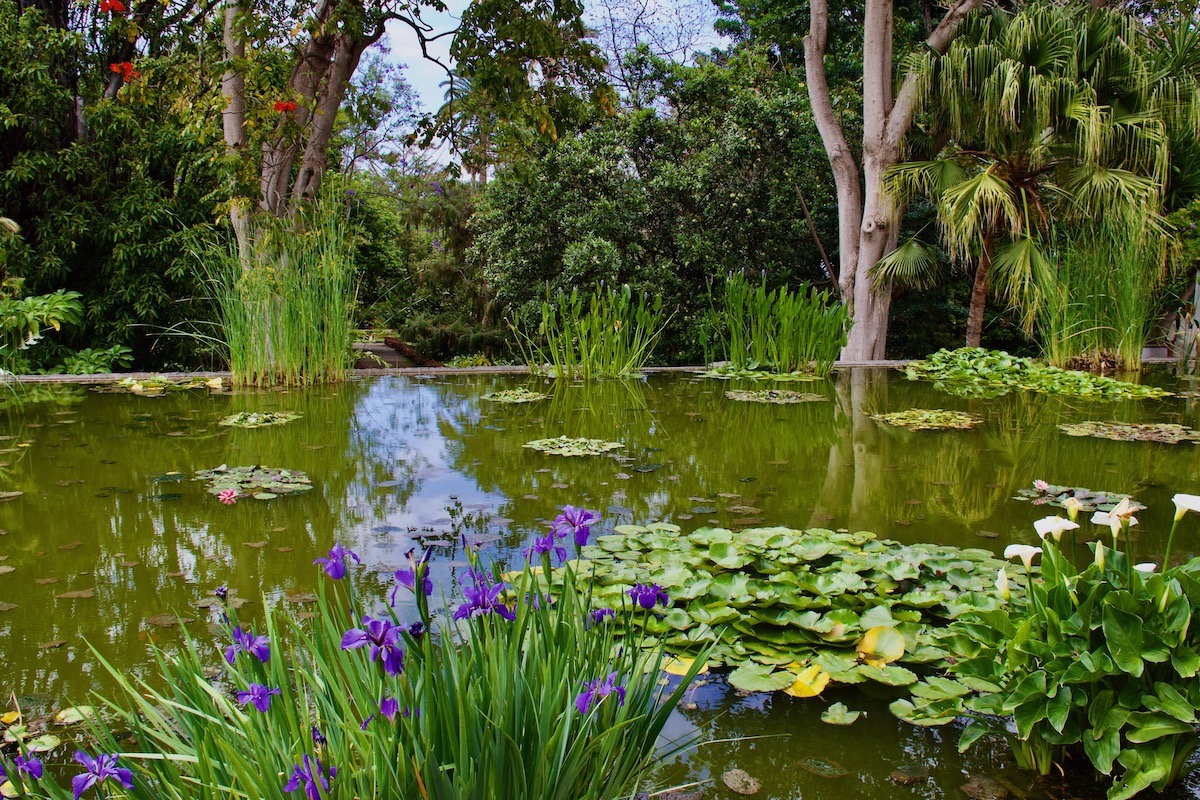 I only had a short distance to walk from the gardens back to my hotel, the fabulous Hotel Botánico whose lush gardens are just as stunning as the ones I have just left. 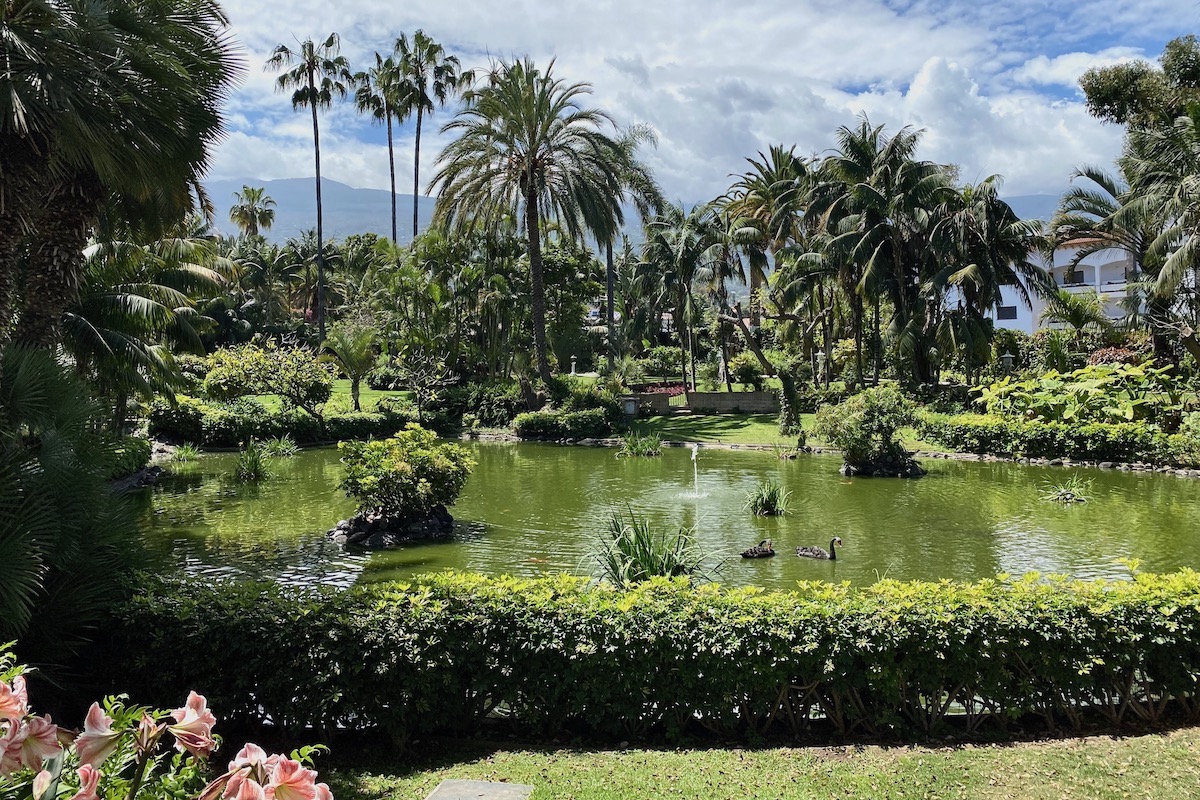 An evening visit to the nearby Teide National Park is the perfect end to my day in Puerto de la Cruz.

A highlight of any stay on Tenerife is a visit to the Teide National Park in the centre of the island. The extraordinary landscape of this park surrounds the active Mount Teide although it is has not erupted since 1909. The park is a UNESCO World Heritage Site and a hugely popular place to watch the sun go down. 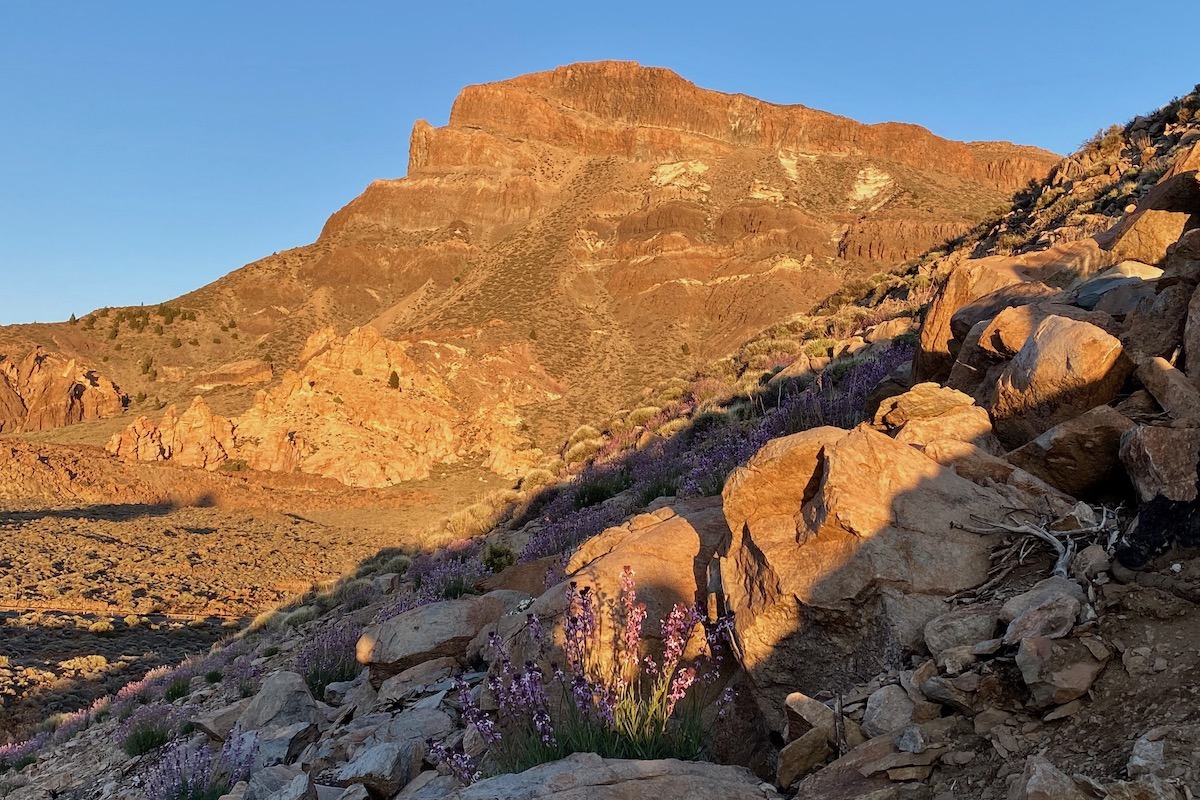