The Riverside of Watford in Hertfordshire

In the past the clear waters of the River Colne in Watford drew the printing and brewing industries to the town. Today the river has been incorporated in some interesting attractions.

Watford is the largest town in the English county of Hertfordshire. The arrival of the railway and Grand Union Canal changed an agricultural landscape to an industrial hub. Mansions and parkland gave way to mills and breweries. Today many interesting buildings have been incorporated into the fabric of this modern busy town. One excellent example is Monmouth House on the High Street. It was built as dower house early in the seventeenth century. His widow moved there in 1639 when he died. Today Bosleys pub occupies the ground floor of this impressive Grade II listed building. Watford was once famous for its many pubs both due to its flourishing brewing industry. The Watford Museum tells the story of Watford and is breweries. 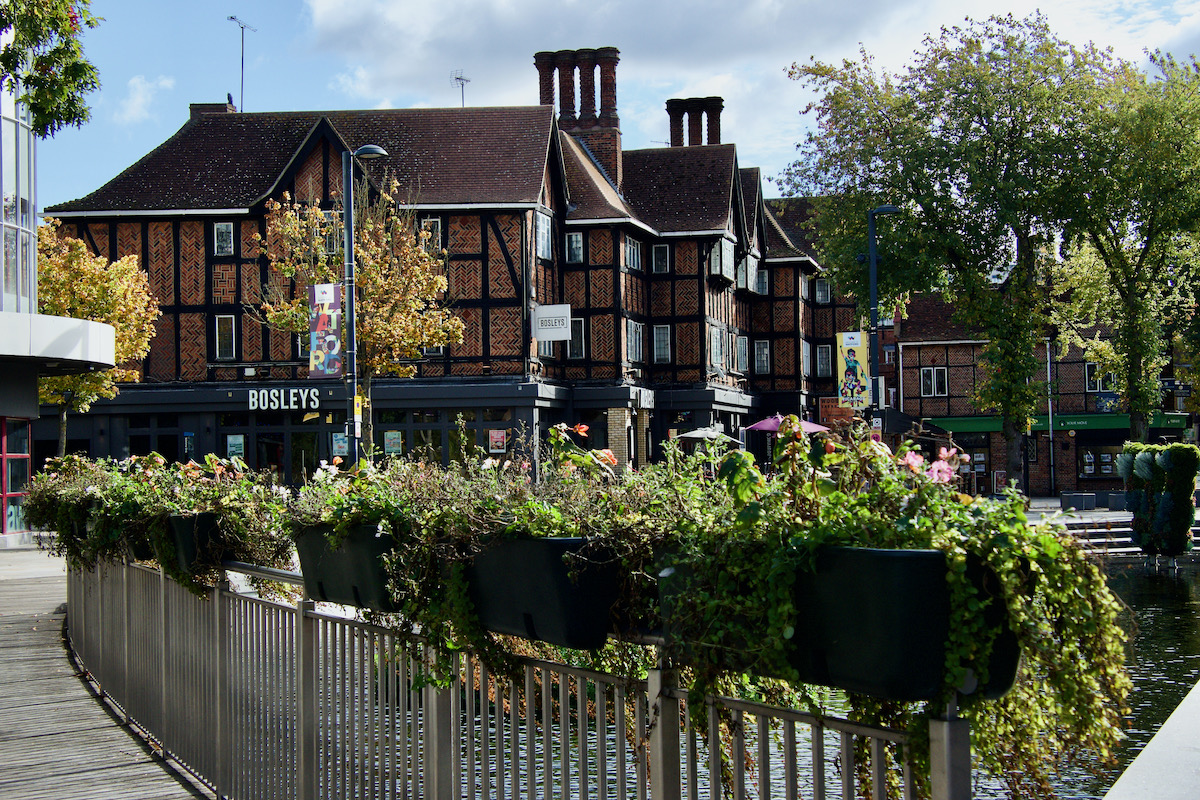 The Museum in Watford

Benskins was one of several important breweries that came to Watford at the end of the nineteenth century. They were attracted by the clear waters of the River Colne and improved transport links with the arrival of the railway and the proximity of the Grand Union Canal. Benskins was quick to establish itself as the most successful brewery gradually taking over all the other breweries. It operates as a family business until it was taken over by Ind Coope in the 1950s. When brewing ceased altogether in the 1970s the brewery building was destroyed. But the impressive family mansion remains and became the home of the Watford Museum in 1981. 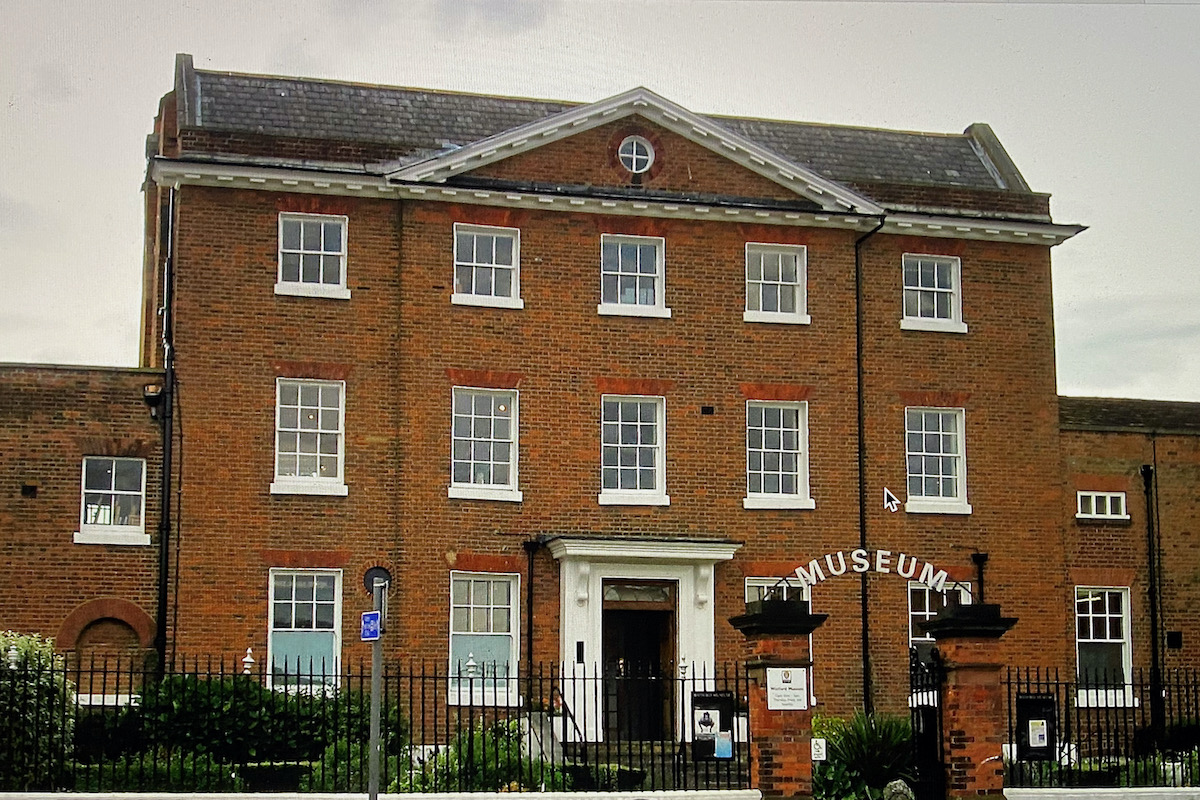 Watford Museum is an Aladdin’s Cave of industrial artefacts, Watford Town Football Club memorabilia and fine art. Its exhibits relate the history of brewing, paper-making and printing in Watford. The clear constant waters of the River Colne were ideal for making paper and paper mills began to appear in the area from the middle of the eighteenth century. One hundred years later an increased demand for paper and the introduction of paper-making machines led to the rapid decline of hand-made production meant most of the mills closed down. A favourite feature, reminiscent of the town’s rich heritage of pubs and inns, is the original bar from the Pennant public house (now O’Neill’s ). The name The Pennant was derived from the logo for Benskin’s Brewery. On learning that the River Colne had once flowed into a popular fresh water lido in the area now known as Waterfields Recreation Ground that was my next stop. 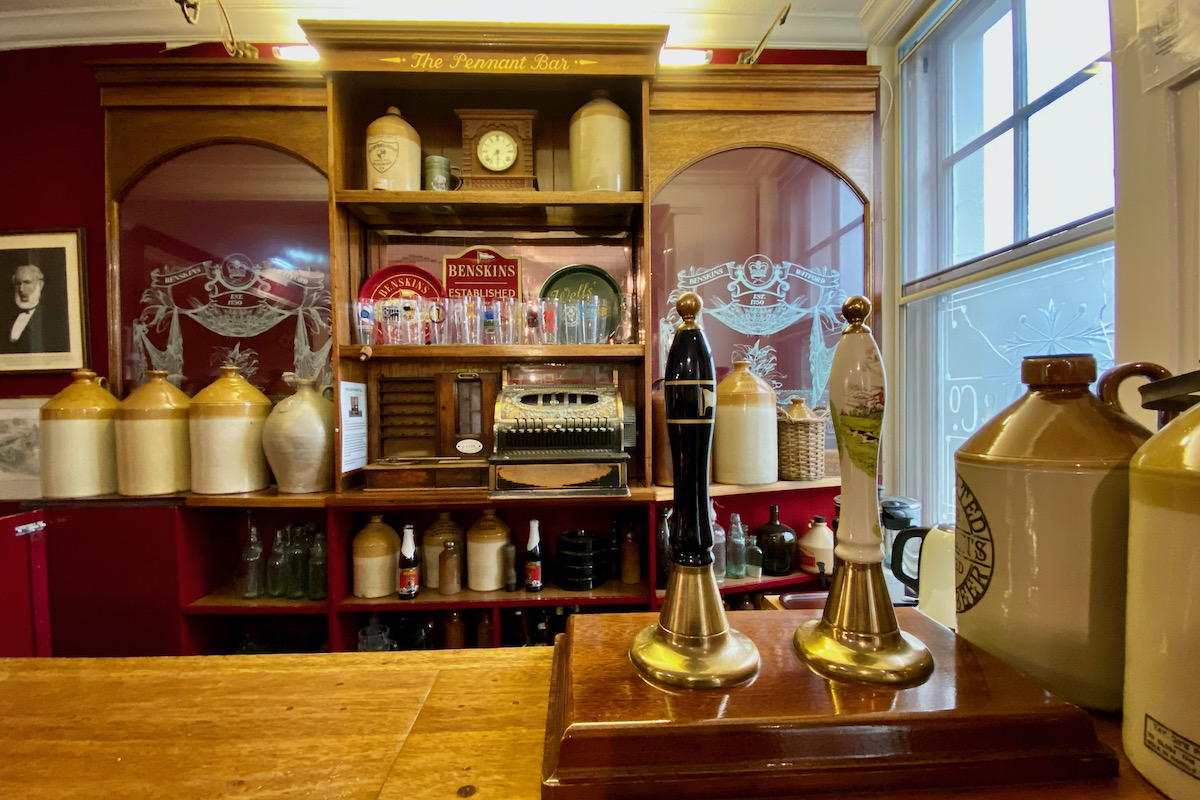 Lime trees were used to mark the boundaries of Waterfields Recreation Ground when it was established in 1910. A children’s playground, a drinking fountain and a toilet block had been added by the 1930s. The River Colne runs though the grounds and visitors can walk along a riverside path on either side of the ground itself. Just inside this park there is a small garden featuring a sculpture of a swimmer on a plinth. Wearing an Edwardian bathing costume, his head covered with a knotted handkerchief he is about to dive into the water. In the early 1900s this was the site of a fresh water Lido (an outdoor swimming pool) where the locals could dive and swim in the River Colne. 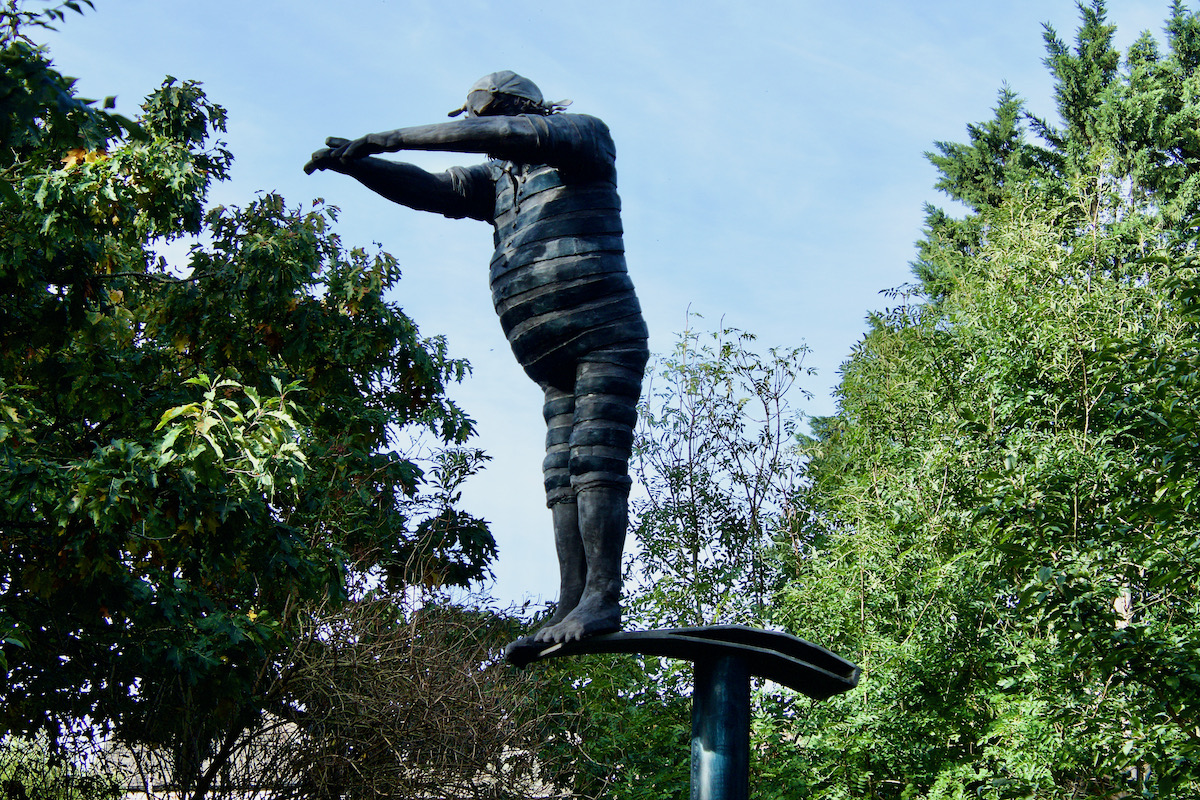 I turned left and followed the riverside path towards the Colne Bridge, passing under a footbridge over the river. The Colne Bridge, a viaduct over the river, was designed by Robert Stephenson, a renowned bridge builder and the son of the famous railways and colliery engineer George Stephenson. This bridge was built in 1837 to carry the London to Birmingham Railway over the river.
An obelisk located near this bridge is a Grade II listed historical coal marker. The city of London placed these markers on coal transport routes to mark the places where tax had to be paid. At first the money raised was used to help fund the rebuilding of London after the Great Fire in 1666. It is inscribed with the London Coat of Arms. 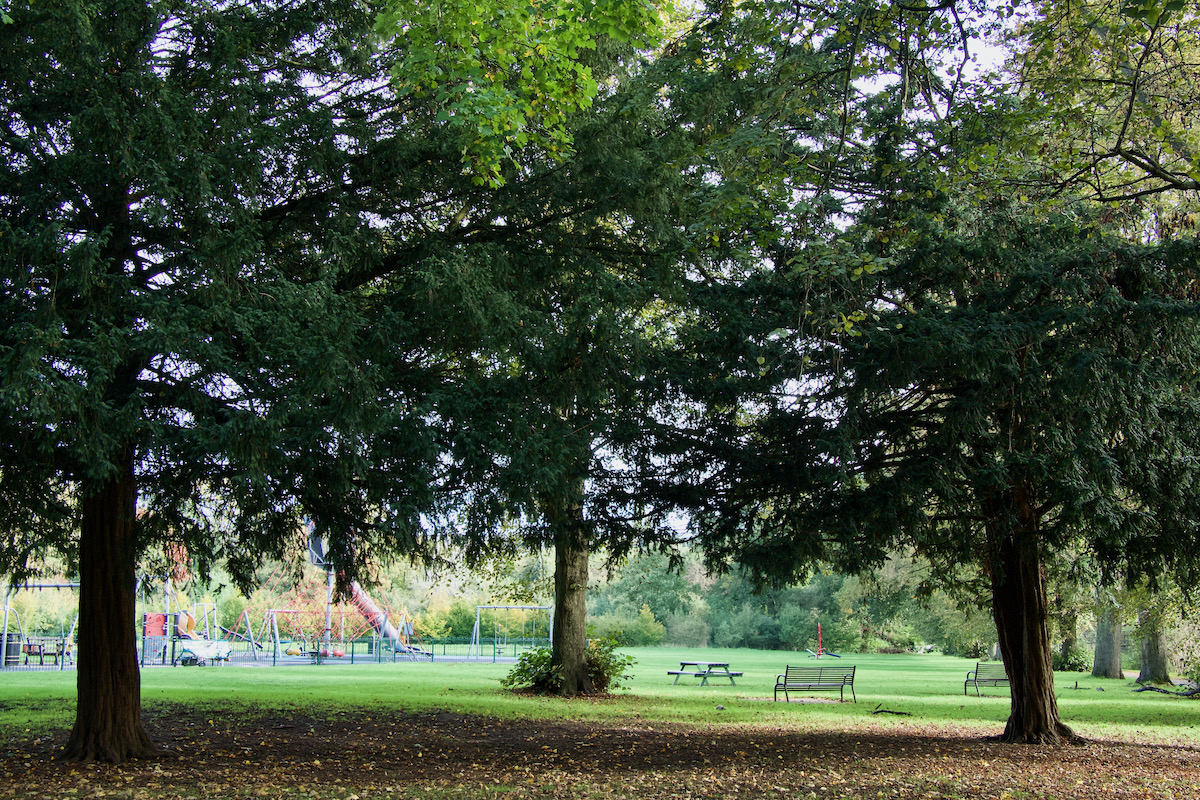 After admiring the obelisk, I retraced my steps enjoying a stroll along the riverbank. Strange how things look different when you walk in the opposite direction. By the road bridge I took the steps up to the road into town and headed for Oxhey Park where I picked up the River Colne again. My route took me past the Tesco Superstore that was built on the site of the old Cut. The Cut was an old mill stream that took the water from the River Colne down to the breweries and the old corn mill on Watford’s lower High Street. 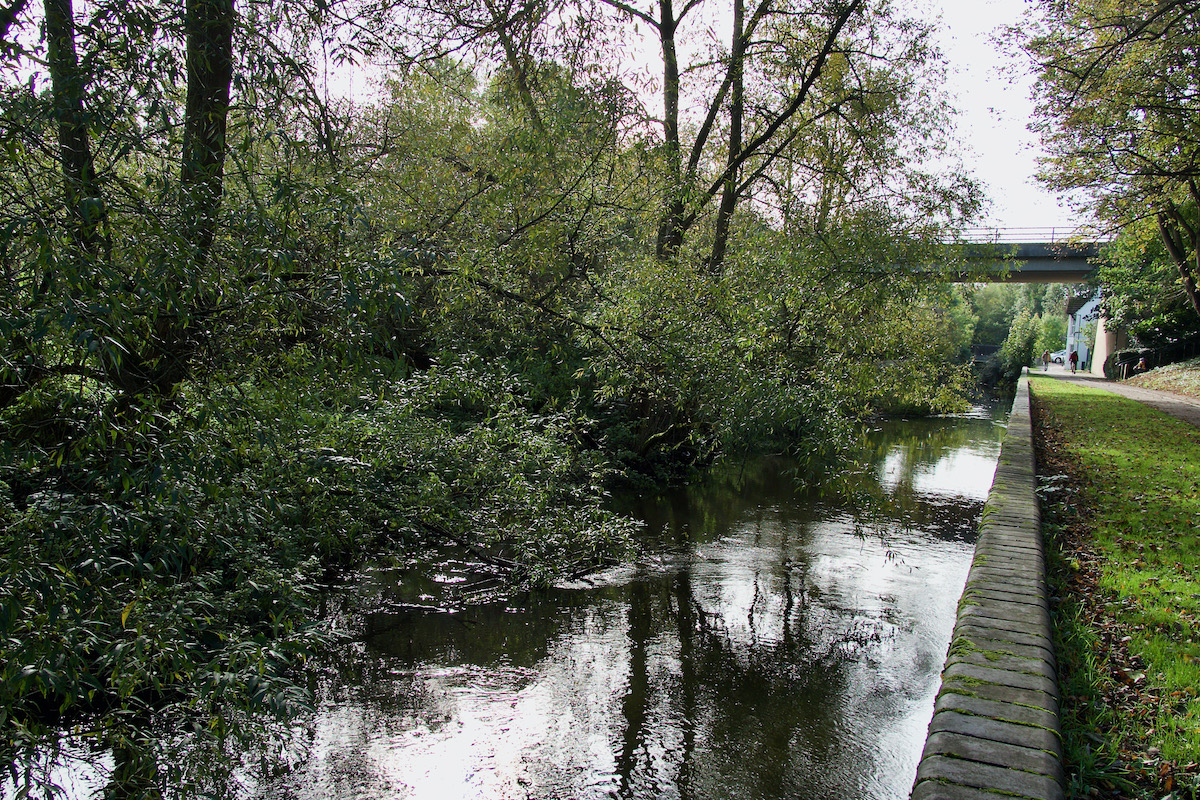 The history of Oxhey Park goes back hundreds of years. It occupies land that was originally part of the Wiggen Hall Estate. Wiggenhall Cum Oxhey was owned by St Alban’s Abbey (now the cathedral) in the 15th century. The land passed into private ownership following the dissolution of the church during the reign of Henry VIII. In those days Wiggen Hall Manor, a large country house overlooking the River Colne, was surrounded by elaborate gardens, a walled garden, woods and landscaped parkland. A large part of the land was requisitioned for food production during the First World War. After the war Watford Borough Council (with help from a Government Grant) bought 85 acres of the Estate to build. a housing estate and recreational space for the local community. Wiggen Hall was abandoned in 1929 and demolished in 1955. The new public park was named Oxhey Park. One of the main attractions, a walk beside the River Colne is as popular today as it was then. 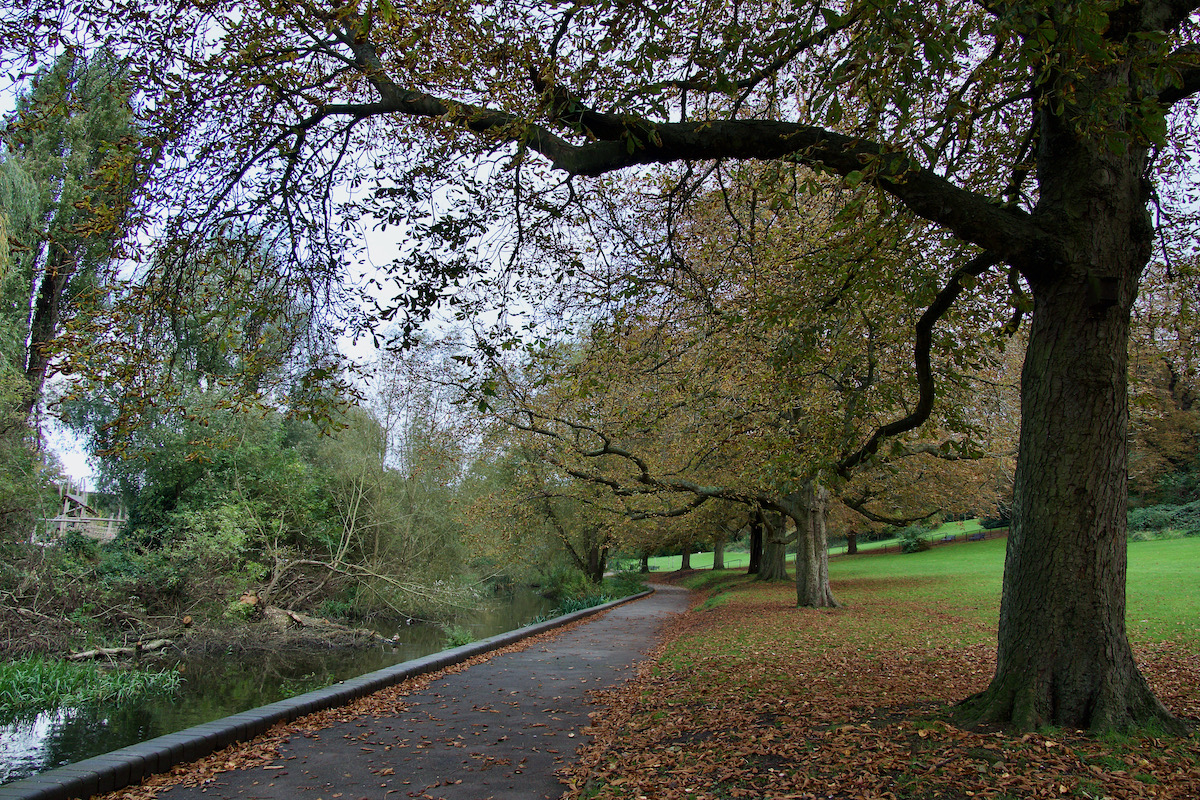 The River Colne walk is a tree-lined riverside footpath running from the Wiggenhall Road entrance in the west through to the Bushey Viaduct also known as Bushey Curve and more popularly as the Bushey Arches. This viaduct was also built by Robert Stevenson and is close to the Bushey mainline station. In front of the viaduct is The Dell. A wooded area surrounded by steep banks and incorporating a spider web of trails. 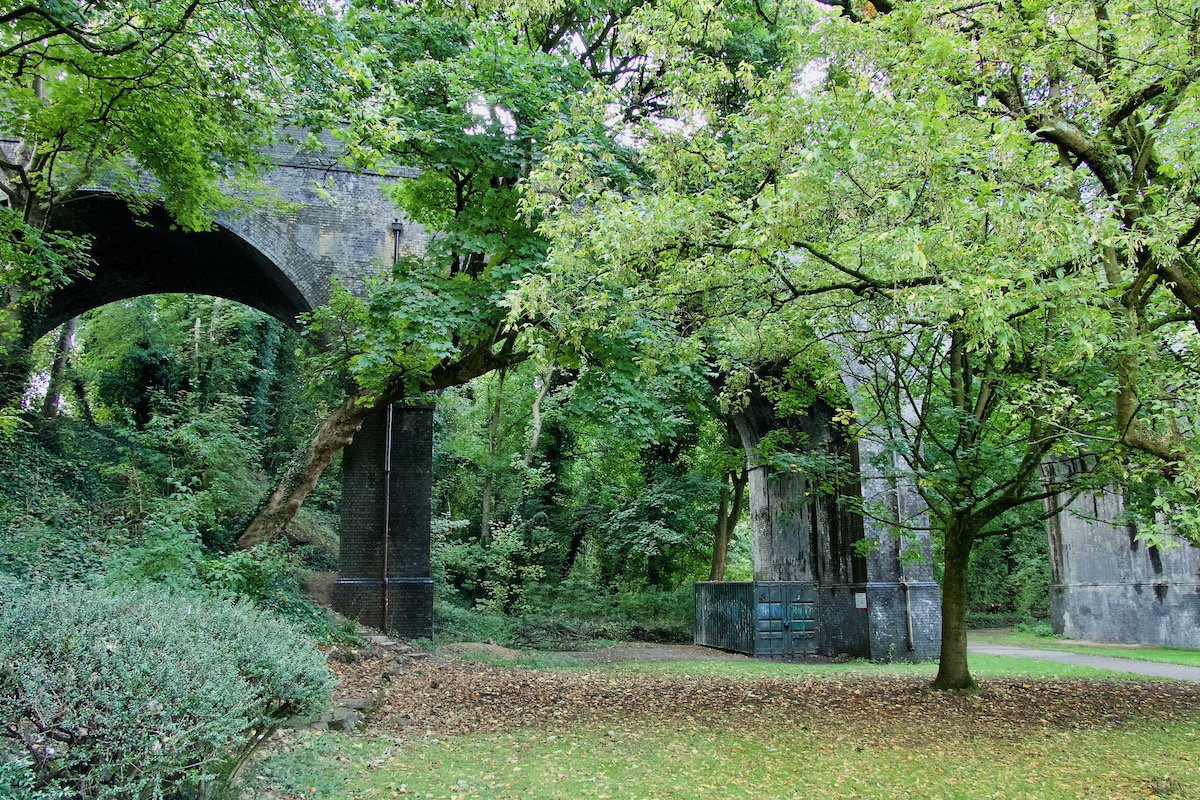 Art in the Park features two works of art created from natural materials and reflecting the character of the park. They were created by the sculptor David Gross. The Conker is located at the top of the Grand Steps. It was inspired by the surrounding avenue of horse chestnut trees. Green oak was used to create a smooth seed or conker that appears to be bursting out of its spiky shell. It symbolises the re-birth and new beginnings of the park that had recently undergone a major refurbishment programme. The second piece is an original oak seat overlooking the conker sculpture. Carved in a series of arches the solid base reflects the Bushey Arches while the back rest takes the form of a folded horse chestnut leaf. Visitors can enjoy great views of the surrounding countryside from the top of the Great Steps. What a lovely way to end a day exploring the riverside of Watford. 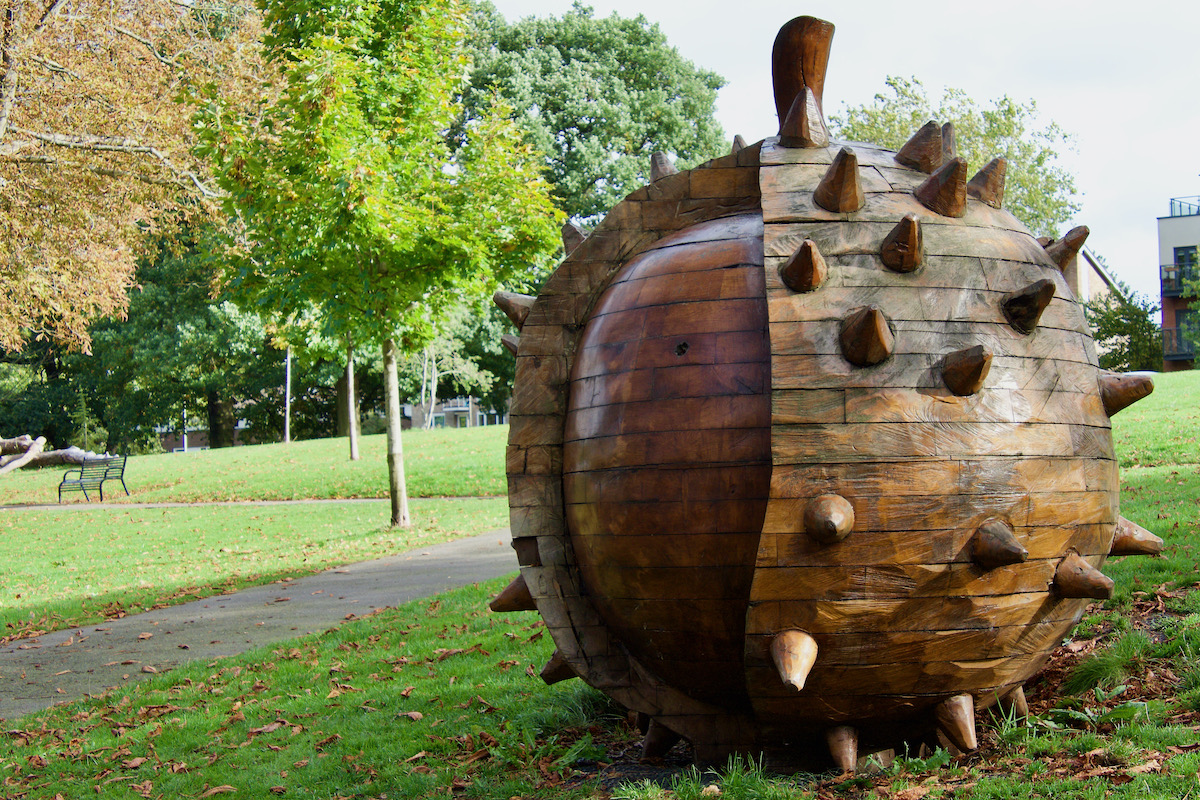