Shenley Village is a Great Day Out from London

Shenley Village is just 16 miles from the centre of London. This traditional Hertfordshire village, deep in the English countryside, has an old orchard, a walled garden and a famous cricket ground.

The Saxon name for Shenley was ‘Scheonley’. It means a fair clearing in the forest. Today, much of the forest has given way to agricultural land but this is still an appropriate description.  The village is surrounded by woods featuring some easy walks. These include the Watling Chase Timberland Trail. The wooded areas were once part of a large estate belonging to Shenley Hall also known as the Mansion. 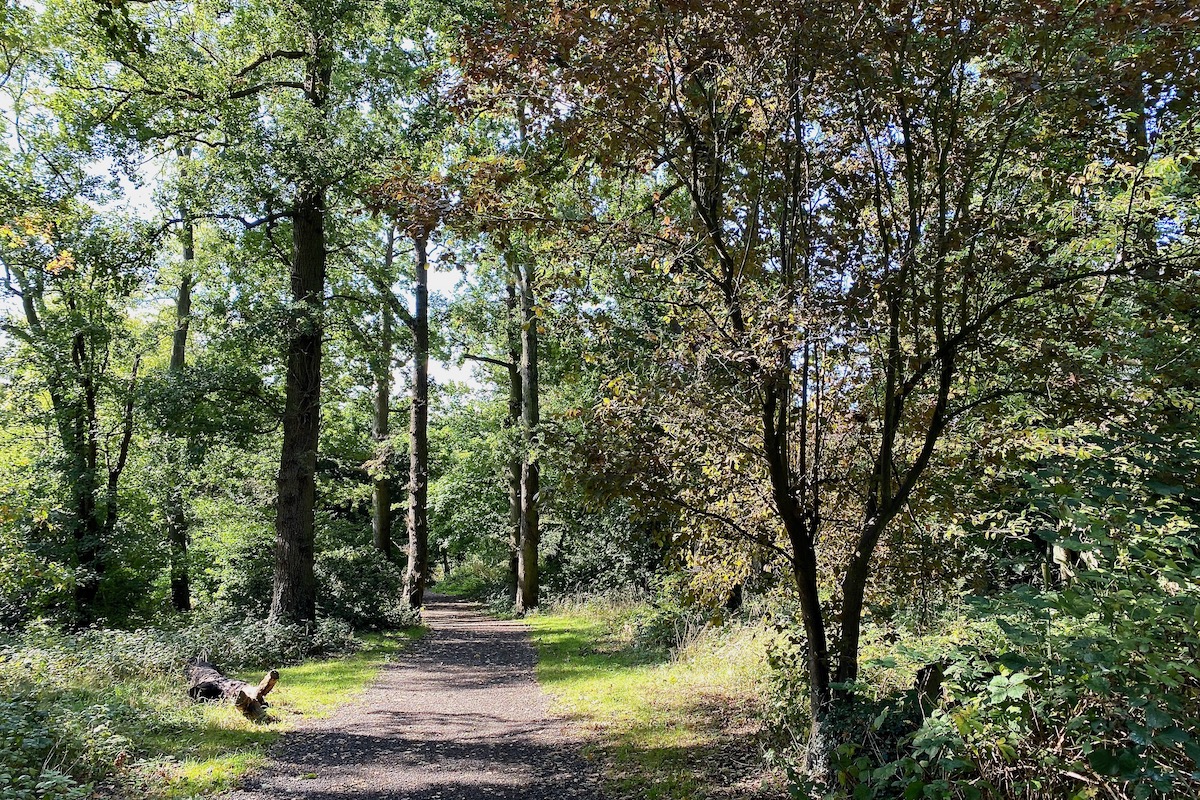 Shenley Hall was at the heart of a large estate known as Porters or Porters Park. This manor dates back to 1291. It is thought the name derives from the name of one of its many owners, John le Porter. Over the centuries the manor was extended until it covered a large around the old village of Shenley. One of its owners built Radlett Lane, which went through the estate and linked Shenley to Watling Street in Radlett. Shenley Hall was built during the nineteenth century and extended by Sir Edward Lutyens in 1914. In 1924 a large part of the estate was sold to Middlesex County Council to build a mental hospital the mansion. The mansion then housed a nursing school and provided accommodation for doctors. Several of the mansion’s outbuildings were preserved and used by the hospital with the addition of a large multi-denominational chapel and a water tower.

When Shenley Hospital finally started closing down during the 1990s the Health Authority sold a large area of the site to developers. A large housing estate now occupies this site. Shenley Hall, now divided into six luxury homes lies in the midst of this residential area. The water tower has been converted into flats. Most of the picturesque area of the old estate has been preserved for the enjoyment of residents and visitors. Shenley Park Trust was set up in 1992. Its role is to develop, manage and maintain a rural park. 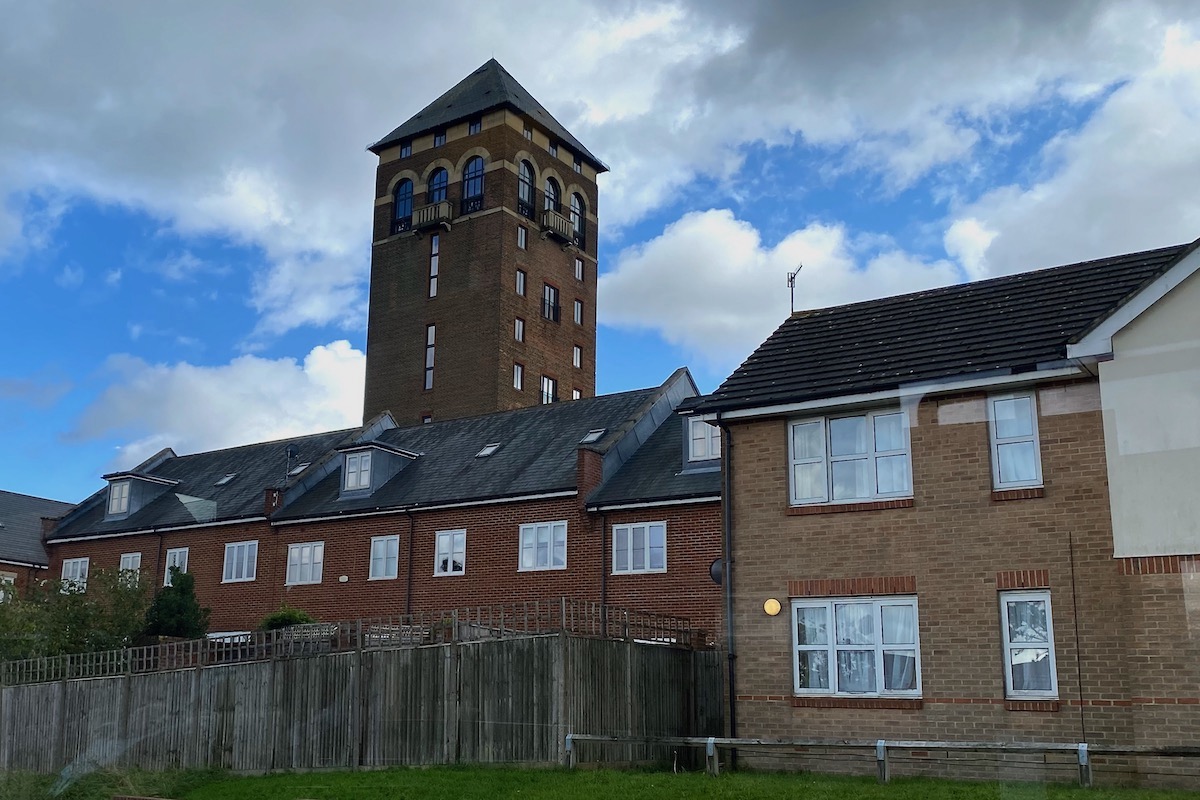 When Shenley Park was established it was given a lump sum and several of the old estate buildings. These included the Chapel (now available to rent for functions) Orchard Villa (the only remaining ward of the old hospital) and the Bothy. The Engine House and Porterslea were sold to generate funds to renovate The Bothy (now the offices of the trust) and refurbish the Stable Yard flats. The Dairy was later converted into two residences. Today, the park is self-financing with most of its income coming from the rental properties. Landscaping and planting (with the help of volunteers) has resulted in some lovely walks linking those areas that are open to the public. I started my visit at the Chapel (now a hall for hire) and then followed a footpath that led into the old orchard. 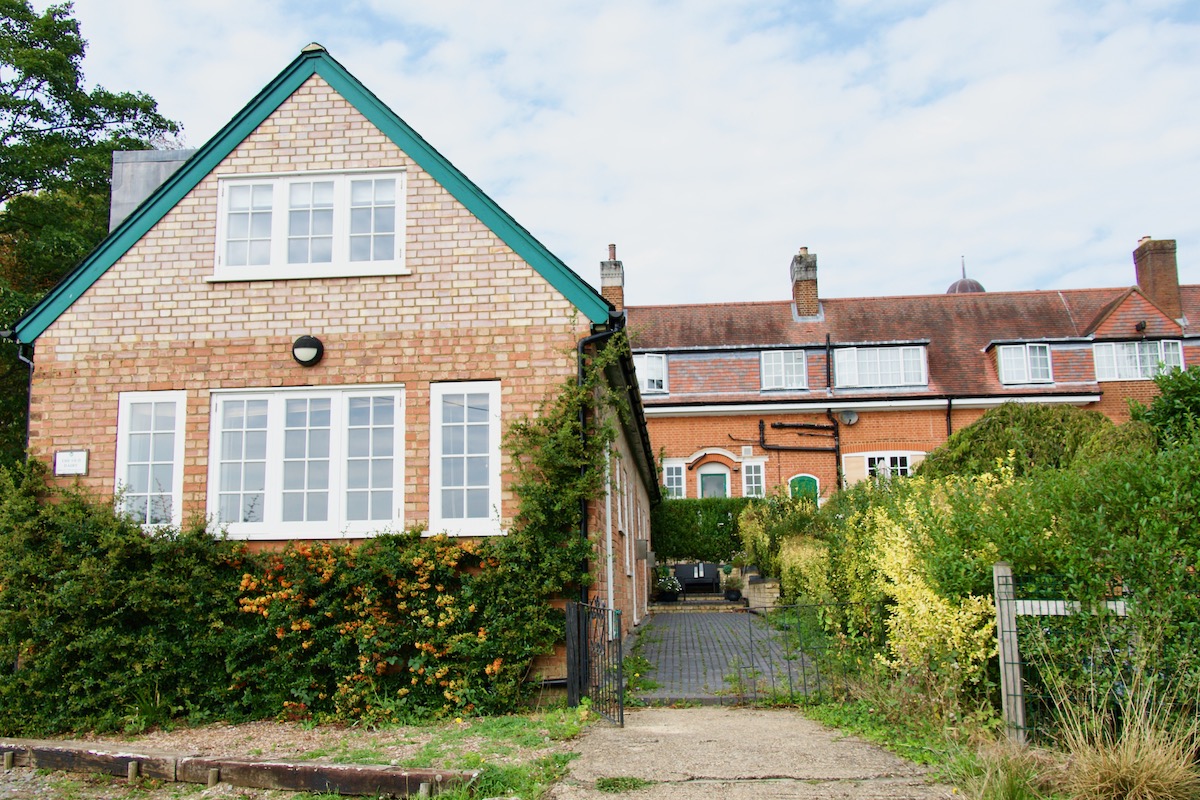 Several orchards on the old estate provided the mansion with fruit. Patients at the hospital worked in them as part of their therapy. The Stanley Lord Orchard is one the original orchards. It takes its name from a Head Gardener who served from 1935 to 1970. I wandered amongst the twisted, gnarled old trees on a sunny autumn day. The branches were laden with apples bathed in golden sunlight. Abundant windfalls scattered on the ground are the source of a pleasant scent of cider. When I emerge on the far side of the orchard I follow a sign to the Walled Garden. This takes me through a pretty spinney and past the Orchard Tea Room. The tea room was built on the site of the former hospital social club. I returned later for a delicious cream tea sitting outside in the garden area. 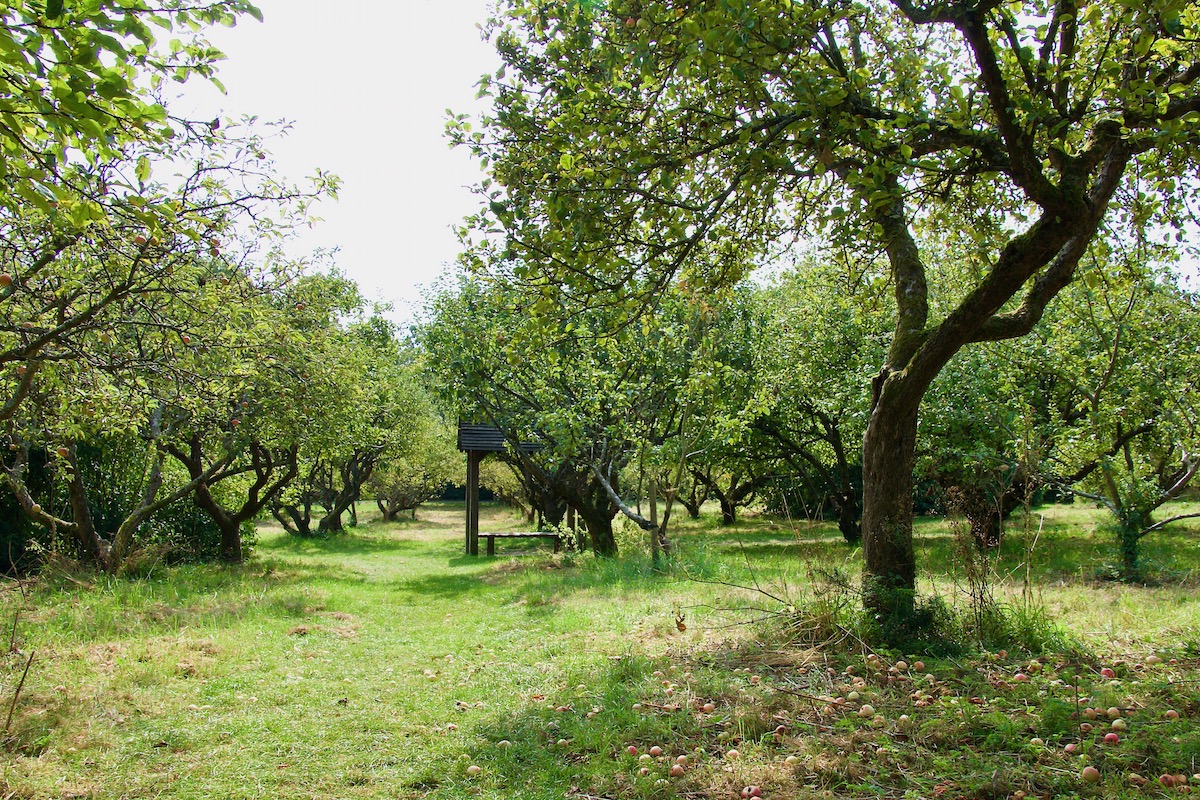 The Walled Garden in Shenley Village

The walled garden was established during the sixteenth century to supply the mansion with fruit and vegetables. It was extended during the eighteenth century and suppled Shenley Hospital with produce. During that period thirty-five gardeners were employed to grow vegetables and exotic fruits in a Victorian-style kitchen garden. When the main hospital closed in 1980 the garden was neglected. It was restored in the early 1990s. It is now laid out as a natural amphitheatre surrounded by flower beds. This lovely venue hosts various events during the summer. When I leave the garden I follow a footpath through another spinney to the cricket ground that famously features the Dennis Compton Oval. 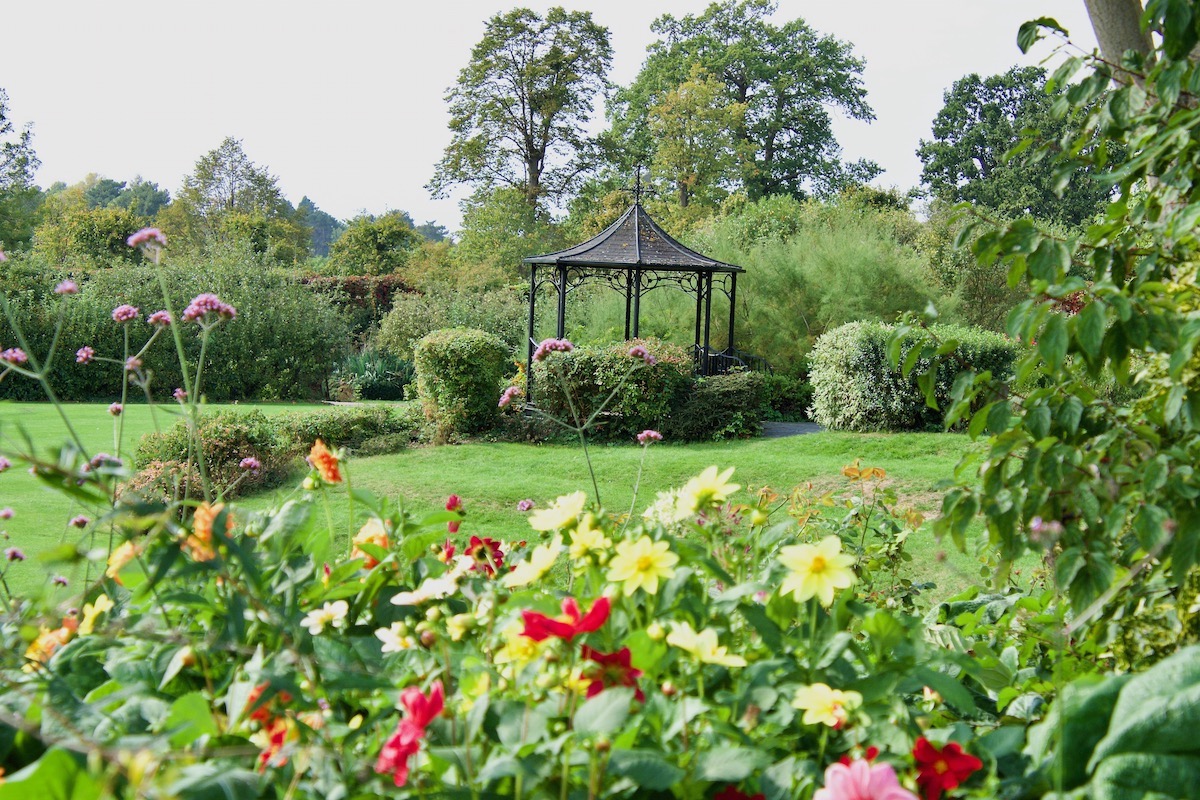 Cricket was a passion of a member of the Porter family who owed the Shenley estate towards the end of the nineteenth century. He enlisted the talents of the renowned W G Grace to design a ground to the dimensions of The Oval. This old pavilion still dominates this lovely cricket ground which is home to the Shenley Cricket Centre. In June 1997, Denis Compton, the legendary Middlesex and England cricketer unveiled The Denis Compton Oval. Since its unveiling Denis Compton Oval has rapidly become one of the most attractive cricket venues in the country and a major cricketing centre of excellence. A multitude of national and county teams have played here including the national teams of South Africa, Sri Lanka, Pakistan, the West Indies, New Zealand, Zimbabwe, Ireland & Scotland. A cricketing theme influenced the road names when the new housing estate was built. I began walking back towards the village centre when I discovered a walk that encompasses Shenley Park and Shenley village. I followed it into the centre of the village.

The Centre of Shenley Village

Following a footpath that skirts some agricultural land and passes through Woodhall Spinney I arrive just below the White Horse pub. It is lunchtime so I take a break here to enjoy a drink and a delicious Asian style duck salad. The pub is busy, and obviously a popular eating place. There is plenty of room inside and outside so I have no difficulty finding a table. When I have finished my lunch to walk towards the centre of the village. On my way I pass the Old School House built in flint stone, a popular local building material and the pretty church of St Martin. This church was built in 1839 and is the parish church of Shenley. Prior to that Shenley was served by St Botolph’s a short distance from the village in an area known as Shenleybury. The churchyard of St Botolph’s (now a private residence) has two famous residents. A renowned architect Nicholas Hawksmoor (1661-1736) who was an assistant to Sir Christopher Wren and the designer of some of London’s finest churches. And a famous racing driver, Graham Hill (1929-1975). 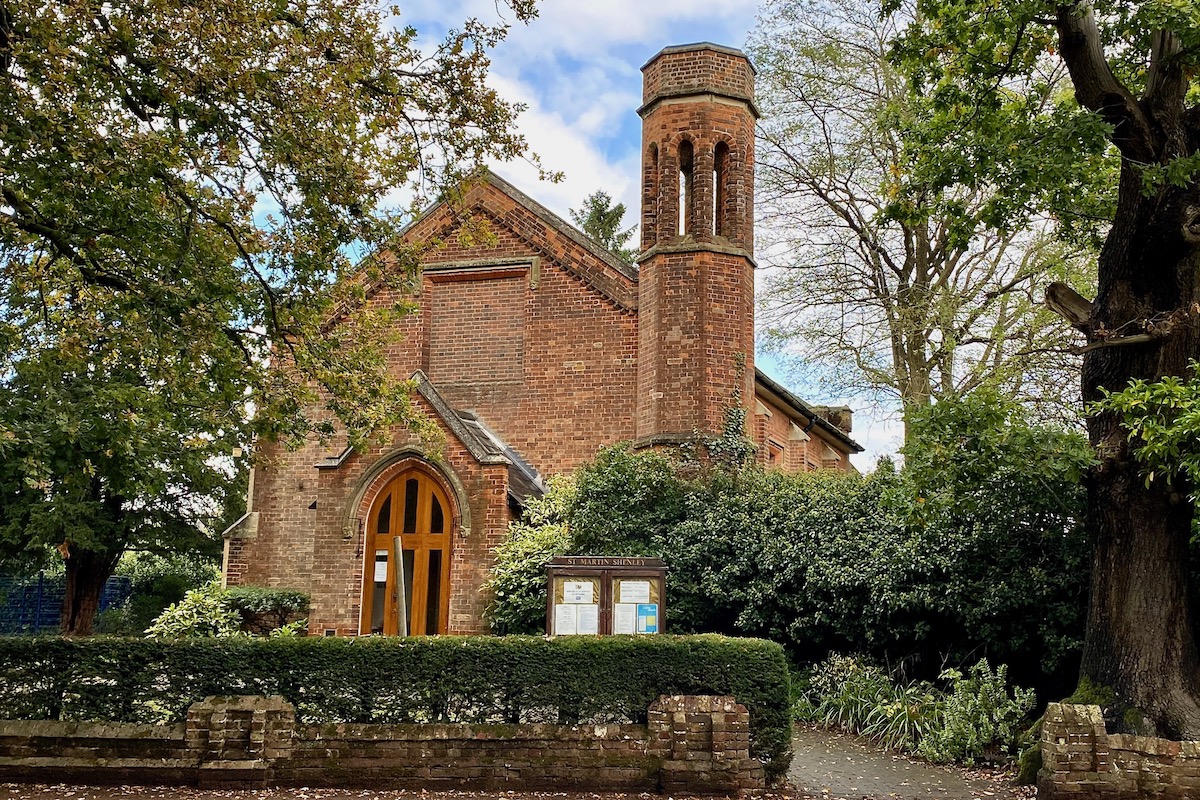 The pretty village centre is dominated by a war memorial and a large pond. Ducks have a little house in the water here. On the bank of this pond is the Cage. A small, dome-shaped prison built in the 1700s. It bears the inscription ‘Do well. Fear Not. Be sober. Be Vigilant’. This building was used as a temporary prison for criminals until the local constable could take them before the local magistrates. It is one of the last remaining roundhouse gaols in England. It gradually fell into disuse when gaols were built in Barnet and St Albans. But during the First World War it was used to imprison an army deserter. In the Second World War it served as an Air Raid Precautions post with its own telephone. An information board details some local history about the Cage. I re-joined the circular walk that took me back to my starting point and the stop for the local bus back to Radlett, the nearest train station. 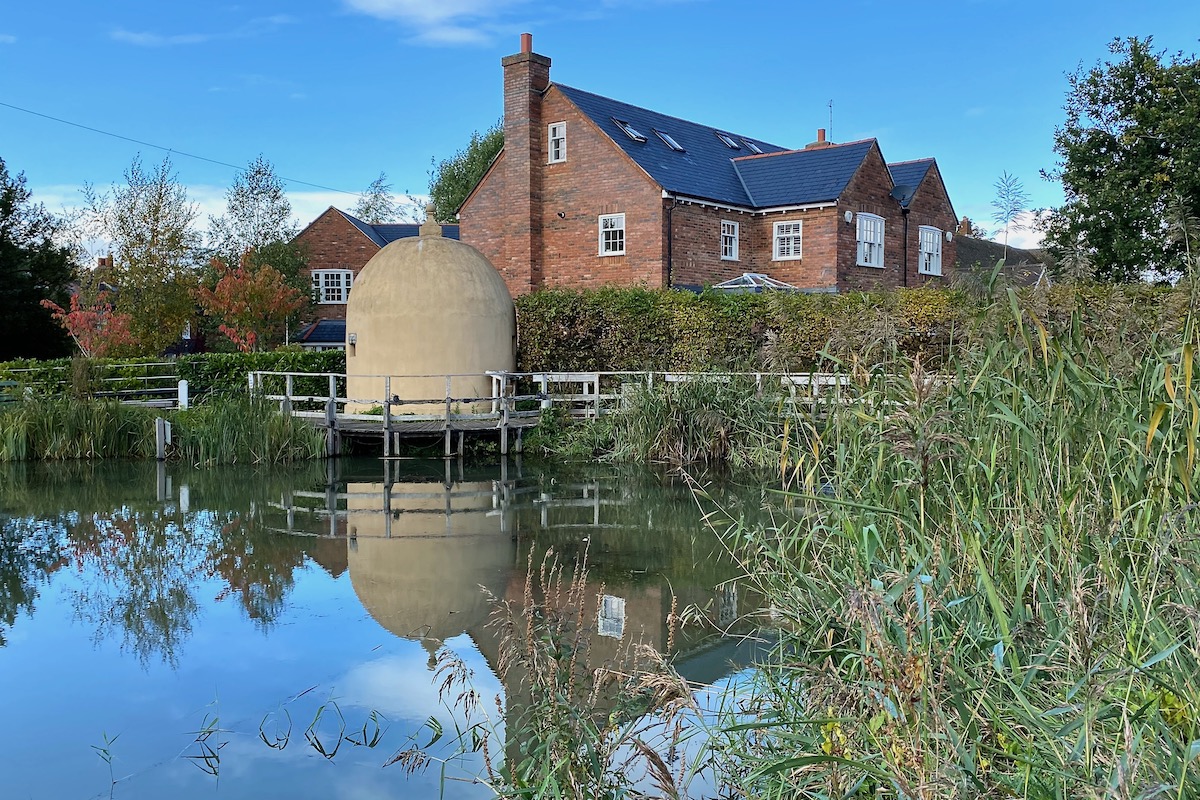 How to Get to Shenley Village

Shenley is very close to the M25 (Junction 22), the A1 and the A4 so it is easily accessible by car. There is a regular train service from London St Pancras to Radlett and then a local bus, 602, from Radlett that goes through Shenley Village.