A Real High on the British Airways i360 in Brighton

As I boarded the train to Brighton heading for the British Airways i360 I had no idea what to expect. I just knew I was going to be transported high above this popular coastal town.

When the West Pier on Brighton seafront was partially destroyed by fire plans to restore proved impossible. The old pavilion was almost completely demolished leaving only its skeleton at sea and few of the old wooden pier supports in front of it. However, the two nineteenth-century Italianate toll booths were still in good shape. These two attractive buildings have been restored to form an integral part of an exciting development on the shore side of the old pier, the British Airways i360. 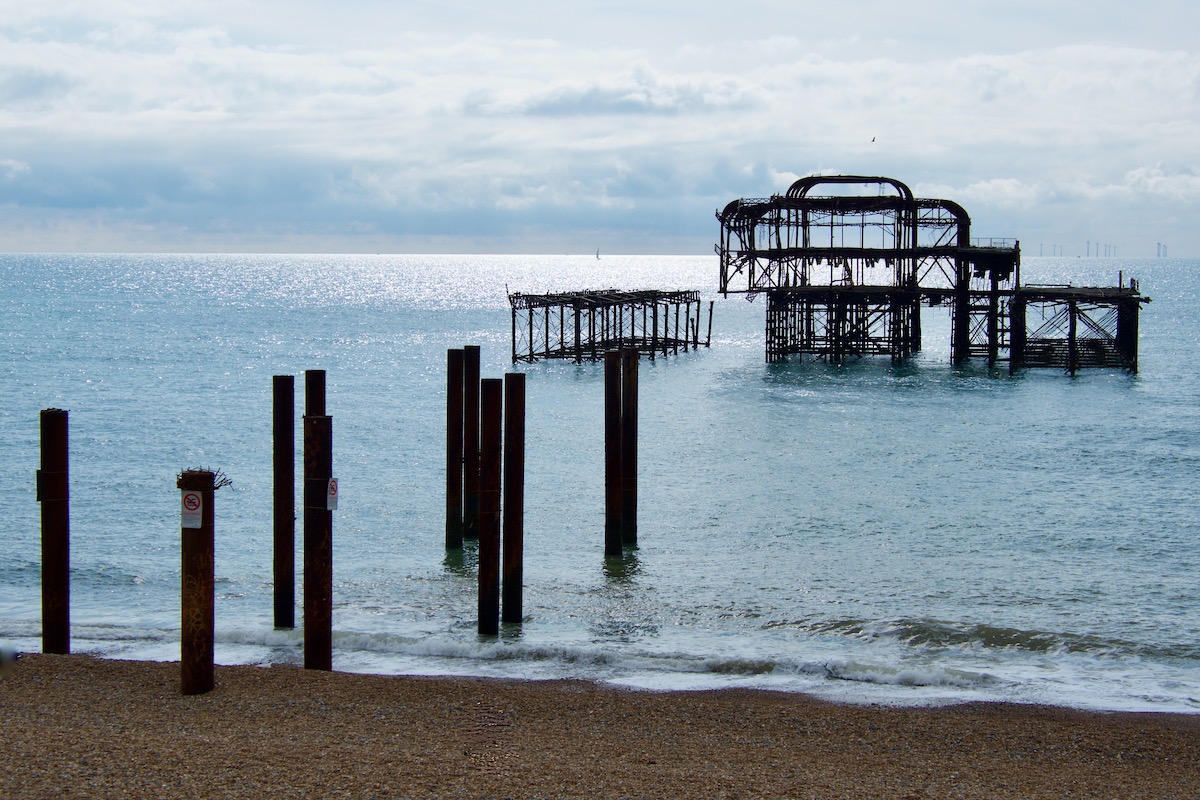 The British Airways i360

This vertical interpretation of a seaside pier was designed, engineered, and manufactured by the team responsible for the London Eye. The 162-metre tall needle structure tower is surrounded by a moving viewing platform. Initially, the project was to be funded privately by the owner of the pier site, the West Pier Trust. The trust had hoped that the revenue from the Brighton i360, its original name, would fund a full restoration of the West Pier. When the project experienced financial difficulties it was rescued with a loan through Brighton and Hove city council. By the time the i360 opened in August 2016 British Airways was on board as the official naming rights partner. The British Airways i360 staff wear the British Airways uniform and replicate the experience of a British Airways flight. 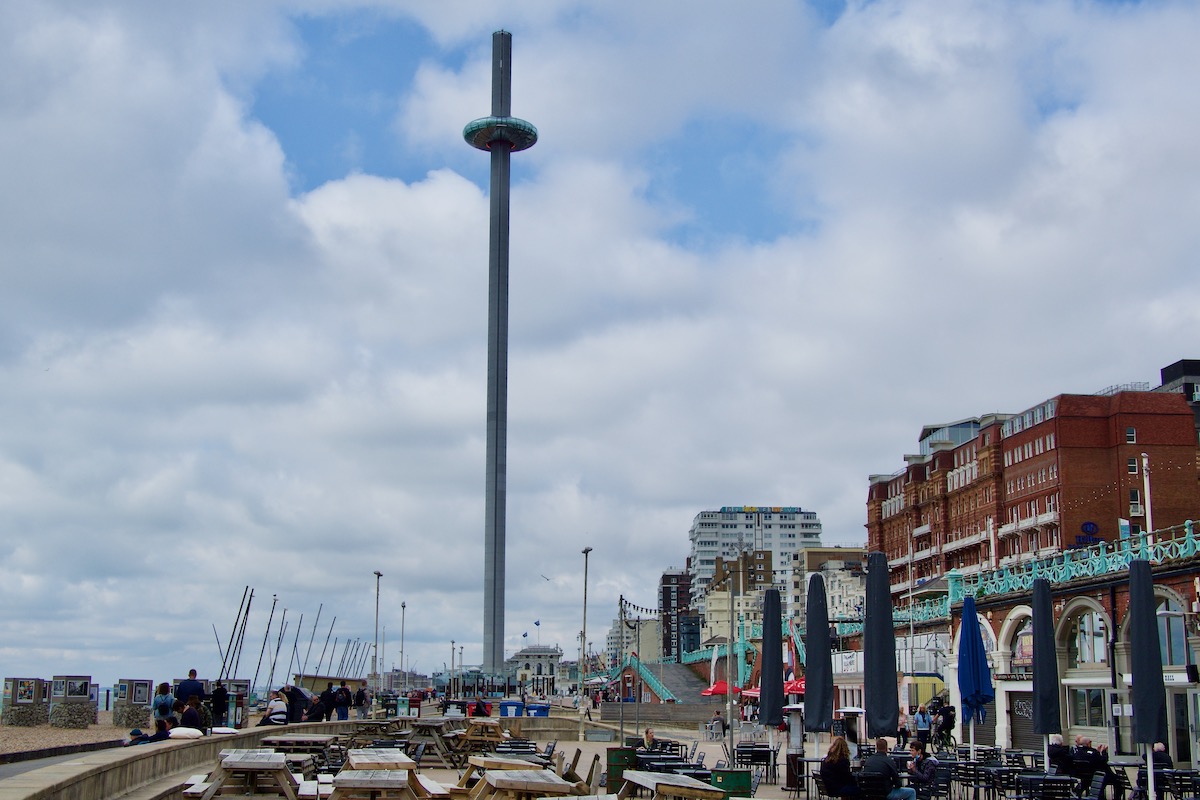 Lift-Off and Landing in the British Airways i360

After checking in I had my temperature checked before going through security. As my visit was during the coronavirus pandemic it was comforting to see that all staff and passengers were wearing face coverings. All the passengers for my flight were directed to the boarding gate, a large terrace overlooking the beach and the ruins of the West Pier. There was time to enjoy the views over the beach and a drink from the bar while we waited. I also had an excellent view of the 12.30 pm flight coming into land. The huge viewing pod glided silently past me to ground level where the passengers disembark. It then appeared next to us on the terrace and our flight boarded. I felt as though I was on the set of a science-fiction film. A thrilling experience. 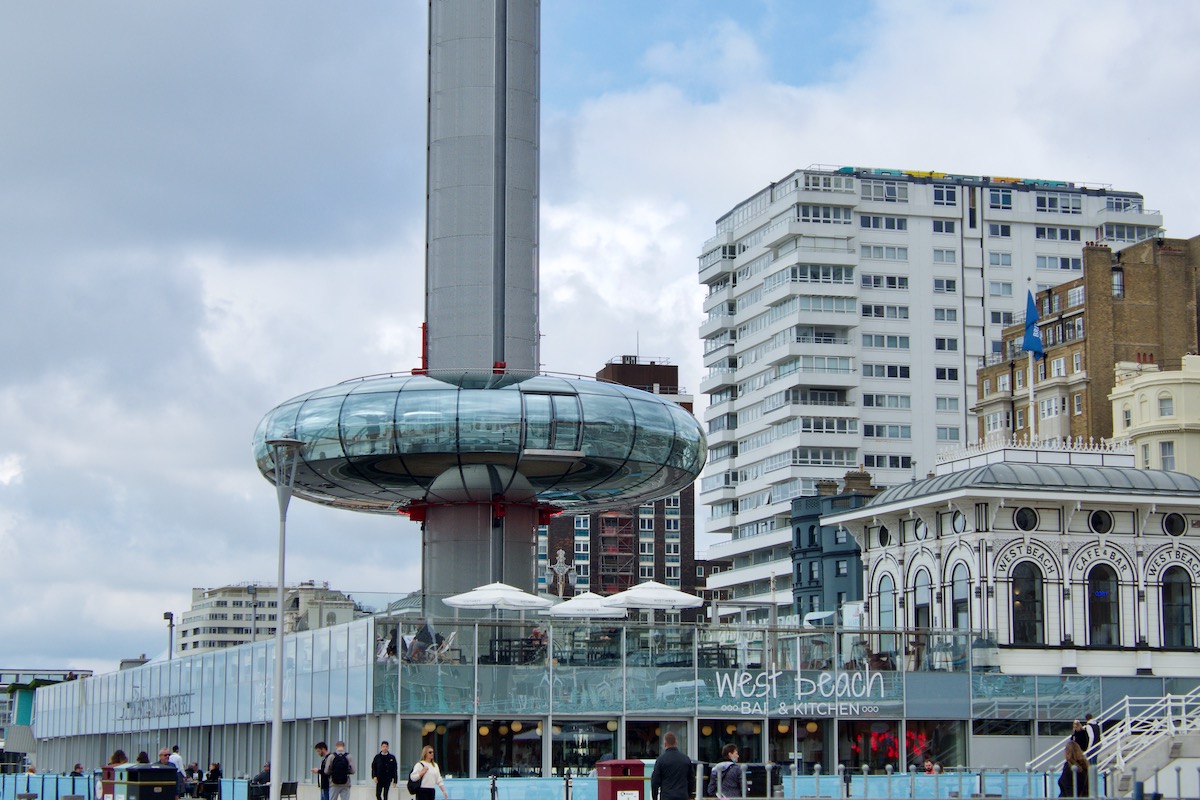 The In-Flight Experience on the British Airways i360

My flight was not full as current restrictions requiring social distancing have resulted in a reduction of the maximum load which is 200 people. But it is not compulsory to book online in advance as tickets are also available on site. Inside the pod seating is available and there is plenty of standing space. After doing a circuit of the pod I spent some time at the bar discussing the merits of a Brighton gin with a flavoured tonic versus a local sparkling wine. I chose the former and when I left the bar I was surprised to see we were well on the way to the top. I had not felt any movement at all. I was lucky it was a clear, sunny day and I had good views of the Sussex coastline stretching for miles on either side of the pod. Information boards inside the pod allow passengers to identify the attractions of Brighton below us. Seating is available inside the pod which is easily accessible for the disabled. However, most of my fellow passengers preferred to keep circling the pod enjoying the views during our twenty-five-minute flight. 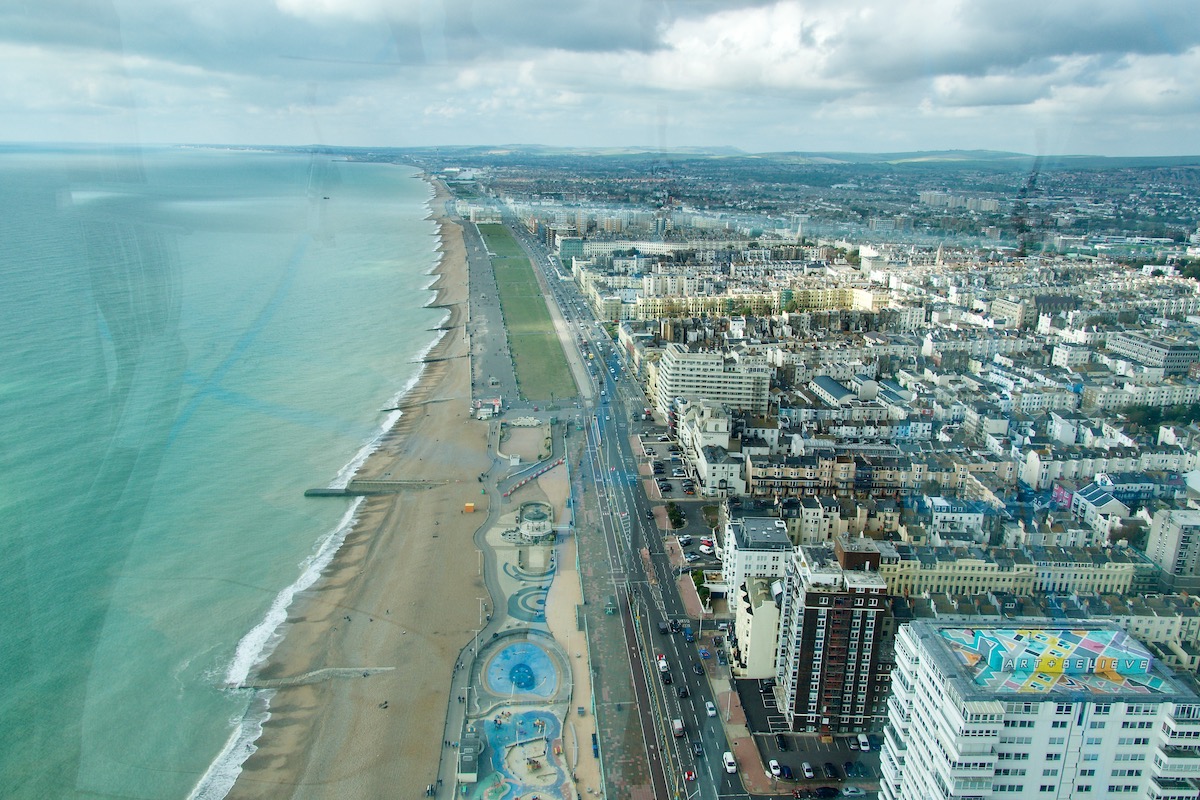 The West Beach Kitchen and Bar 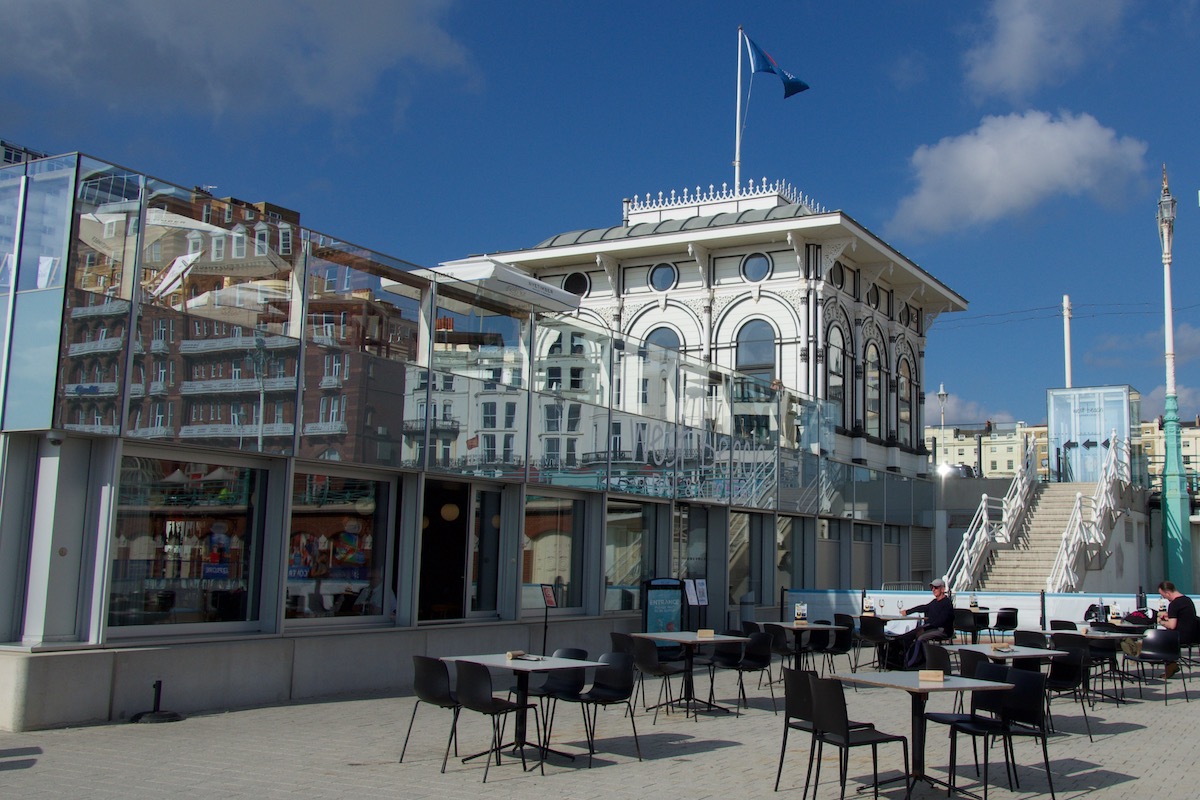 Both establishments pride themselves on a commitment to use local produce from local suppliers in their dishes. I would have loved to try the Smoked Salmon on toasted sourdough bread from the Real Patisserie in Hove topped with poached, organic, free-range eggs from Macs Farm in Ditchling. But, I was too late for this brunch special. So, I chose the more traditional breaded fish and chips. Fish supplied by Brighton’s online fishmonger, Fish Galore. I was not disappointed, it was delicious. I tried some local ice cream for my dessert – three different flavours, black coconut, lemon meringue, and Brighton rock. The latter was surprisingly authentic despite not having Brighton written through it. It was a lovely conclusion to my i360 experience. 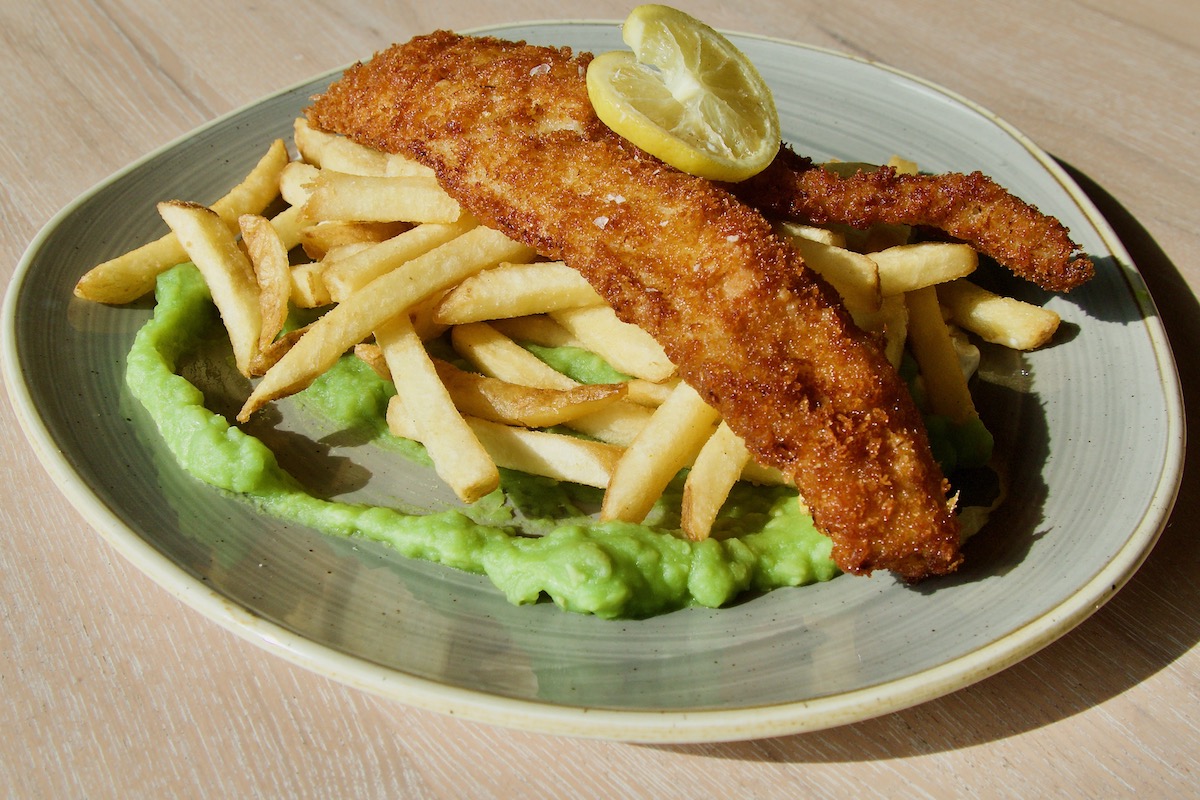