Tracing the Story of Art Nouveau in Riga

Riga is one of my favourite cities. This vibrant, busy metropolis is a mecca for lovers of architecture and in particular Art Nouveau buildings and interiors. Around a third of all the buildings in its city centre were built in this style. On my last visit there I set out to learn why this was the case.

Riga, the capital of Latvia, is often referred to as the Art Nouveau capital of Northern Europe. Art Nouveau architecture was an ornamental style that became popular throughout Europe and America between 1890 and 1910. It was an attempt to break free of the restraints of earlier, more rigid, architectural styles. A time of freedom of expression for architects. Several terms were used to describe it, Libertá (liberty) in Italy, Jugendstil (youth style) in Germany (later adopted by Latvia) and Art Nouveau (new art) in France. The latter was the general term adopted to describe this style. Initially it blossomed as elaborate decoration on the façades of buildings neither associated with the other. In general, the theme was back to nature – animals, plants and suns were most popular. But it was not long before there was a fusion between the building and its decoration. The lines of the building often took the form of stalks of flowers or tendrils of vines. Accompanied by liberal combinations of materials such as ironwork, glass and ceramics some stunning buildings were created during this period. 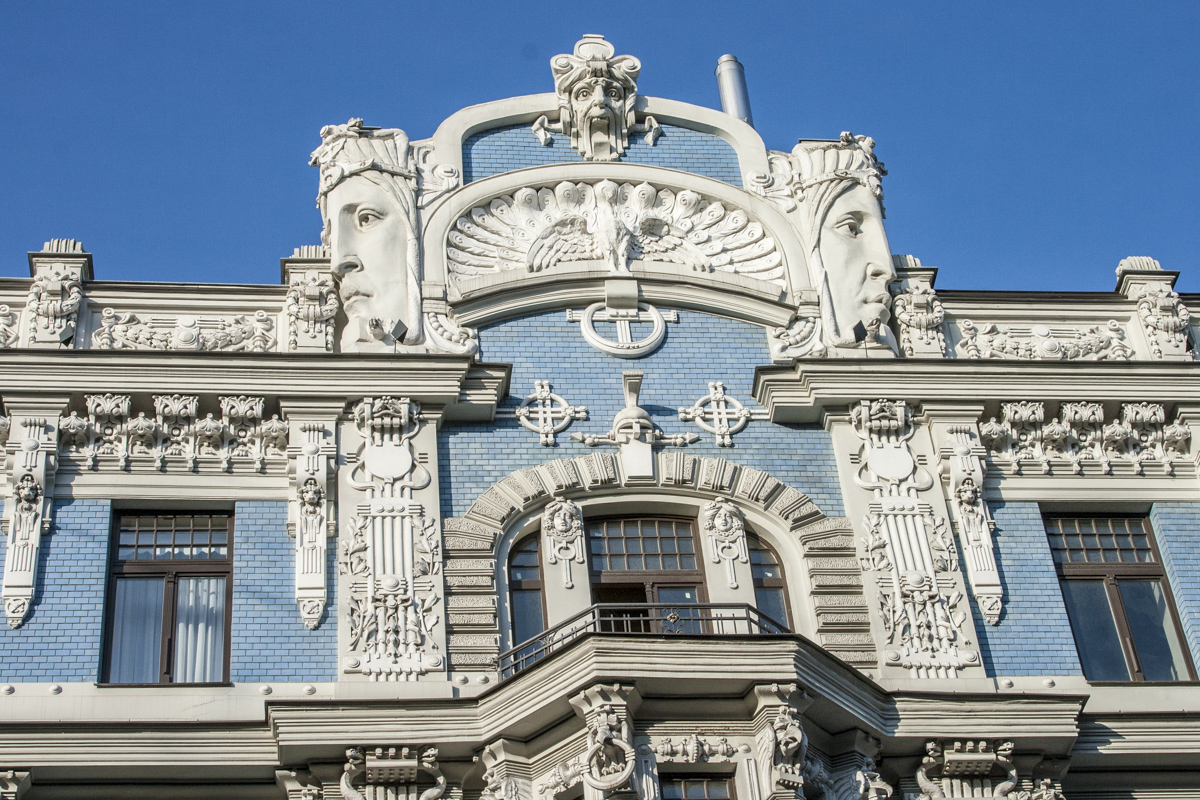 In Riga the Art Nouveau period coincided with a building boom and many of the newly trained architects specialised in Art Nouveau developing not only their own style but also different forms of this new architectural style. The most prolific architect during this period, Konstantīns Pēkšēns designed two hundred and multi-storey brick buildings that were built in Riga. These include houses at 6, Strēlnieku Street, 13, Kaļķu Street and 2, Smilšu Street, all built in 1902. Every single window decoration at 2, Smilšu Street is different and the windows are supported by sculpted upper bodies known as hermas. The fun aspect of this new style was demonstrated by the designation of the title of Miss Riga to one of the female bodies considered the most beautiful stone woman in the city. 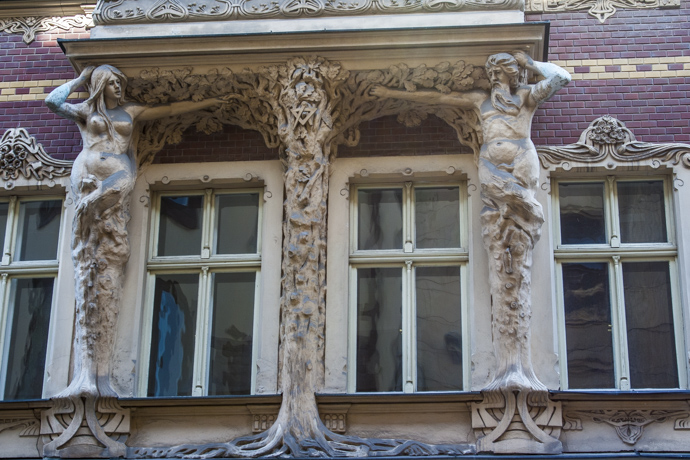 Definitive styles of Art Nouveau began to emerge in Riga. Those with elaborate ornamental trimmings that had not direct with the building became known as Eclectically Decorative Art Nouveau. Riga has relatively few buildings reflecting this decorative trend that was fashionable at the beginning of the Art Nouveau period. This style was characteristic of the civil engineer Mikhail Eisenstein. The apartment building at 10a Elizabetes Street 10a was designed by Konstantīns Pēkšēns but once the work began, it was Eisenstein who decorated the façade with rich and colourful Art Nouveau ornaments including a large aperture in the shape of a keyhole on the upper floor. Eisenstein found a smart way to draw attention to his true profession in the façade by the addition of stylised springs in the design. 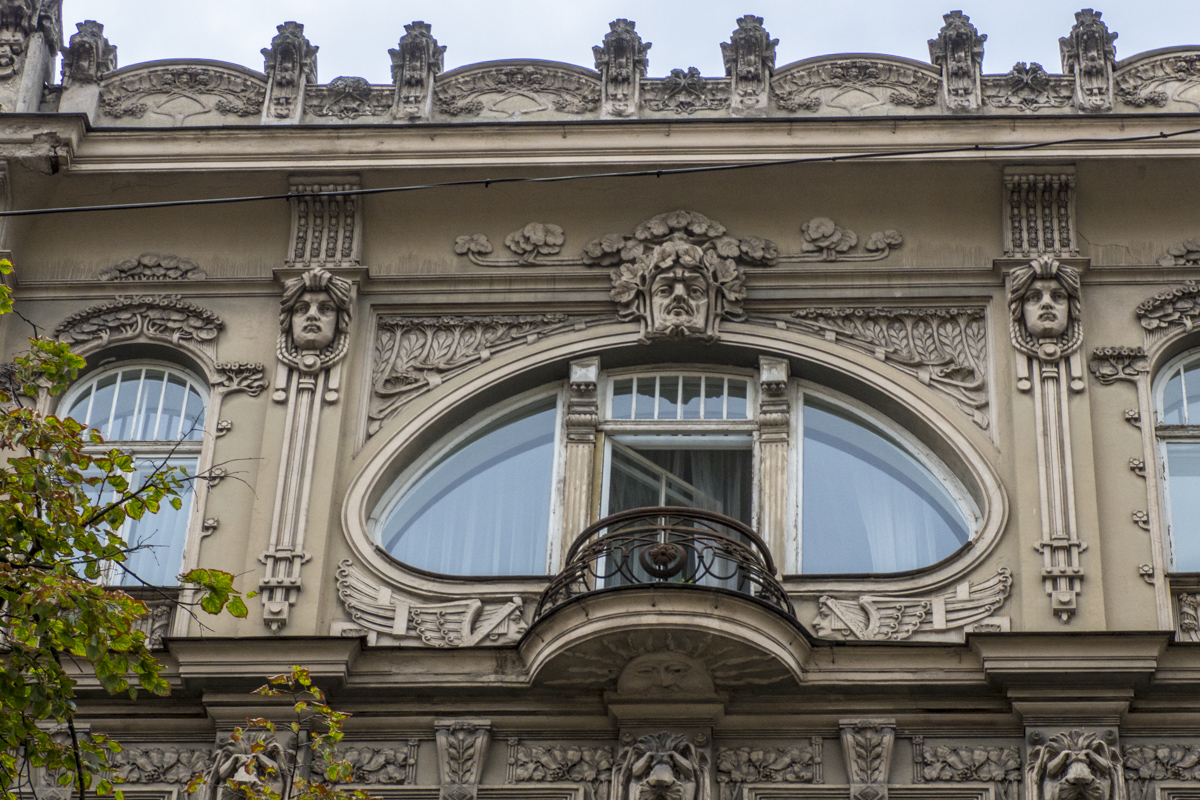 Perpendicular Art Nouveau became popular in Riga after 1906 accentuated the vertical lines of a building, romanticism was abandoned and any ornamentation on the façade was completely integrated with the architectural form of the building. This style is reflected in more than one third of the Art Nouveau buildings in Riga and many examples can be found in Brīvības Street, Ģertrūdes Street and, Aleksandrqa Čaka Street. A leading proponent of this style was Eižens Laube, a student of Konstantīns Pēkšēns. Between 1905 and 1911 the architects of Riga also tried to create a specific Latvian style of Art Nouveau architecture, National Romanticism. Inspired by folk art and typical Latvian domestic architecture they insisted on the use of natural building materials. These solid, dignified buildings have steep roofs, tapered upper parts to window apertures and subdued ornamentation in the style of Art Nouveau. This style that often uses metal lintels, cantilevers and other structural elements as an art form is typical of both Konstantīns Pēkšēns and his student Eižens Laube. Today Riga now has the largest concentration of Art Nouveau buildings anywhere in the world. In 1997 it was designated as a UNESCO World Heritage site. In celebration of this accolade the city has established the Riga Art Nouveau Centre, the only museum of its kind in the Baltics. It is housed in the building created in 1903 by Konstantīns Pēkšēns and Eižens Laube, then his student, number 12 Alberta Street. 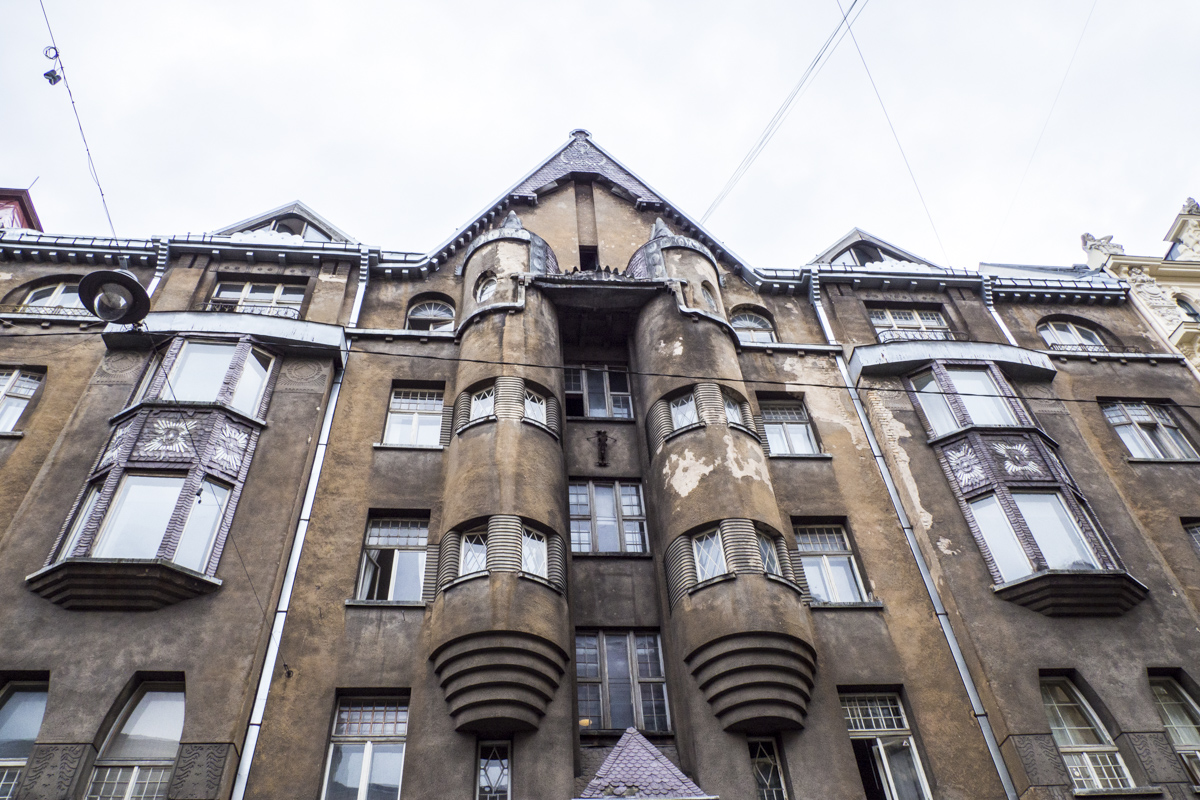 Until 1907 Konstantins Peksens lived and worked in an apartment at number 12 Alberta Street which now houses the Riga Art Nouveau Centre This building has two very distinctive characteristics. The first is a tower protruding from the roof. Towers were often a feature of Art Nouveau architecture in Riga defying locally imposed height restricts by creating an additional room in a tower-shaped structure. 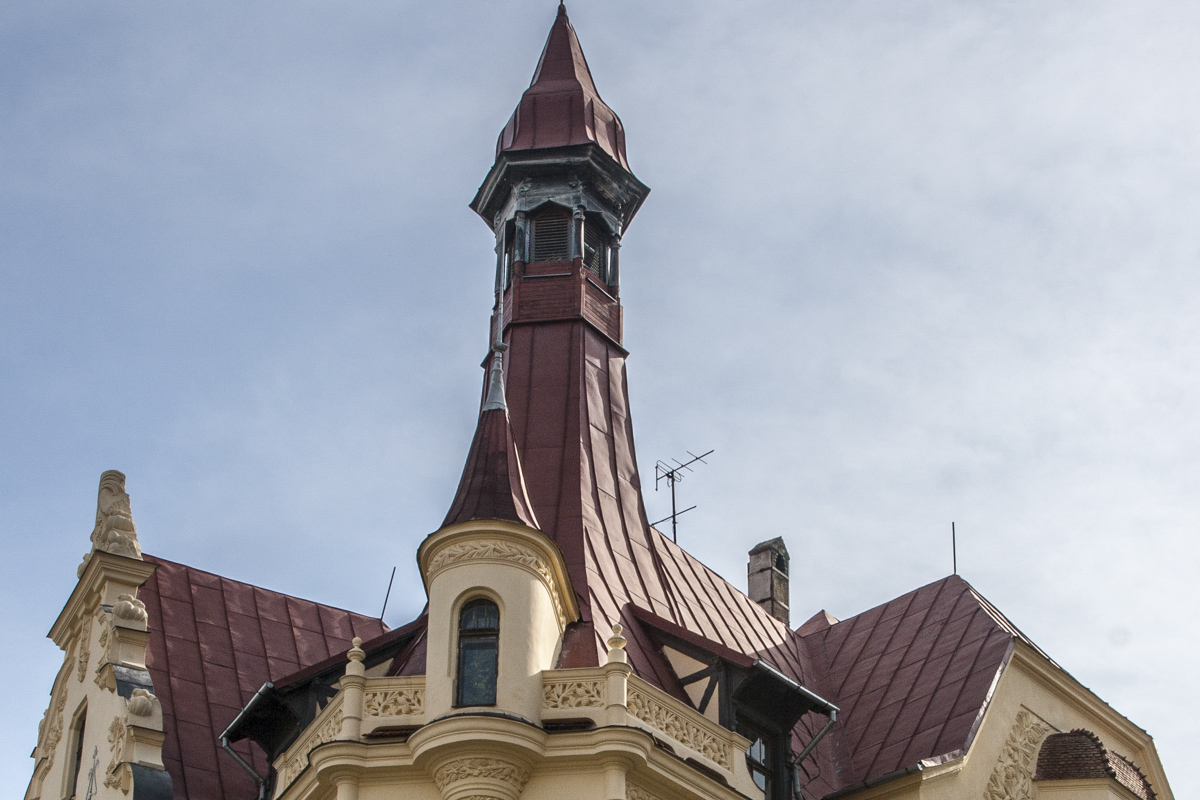 Art Nouveau became a fusion of fancy exteriors reflected in elaborate interiors. Inside the living quarters of Pēkšēns have been re-created using furniture, tableware, paintings and sculptures, clocks and many other items in daily use during the Art Nouveau period. All the rooms are accessed by an incredible spiral staircase in the centre of the building. This lovely museum, the only one of his kind in the Baltics, opened its doors to the public in 2009. 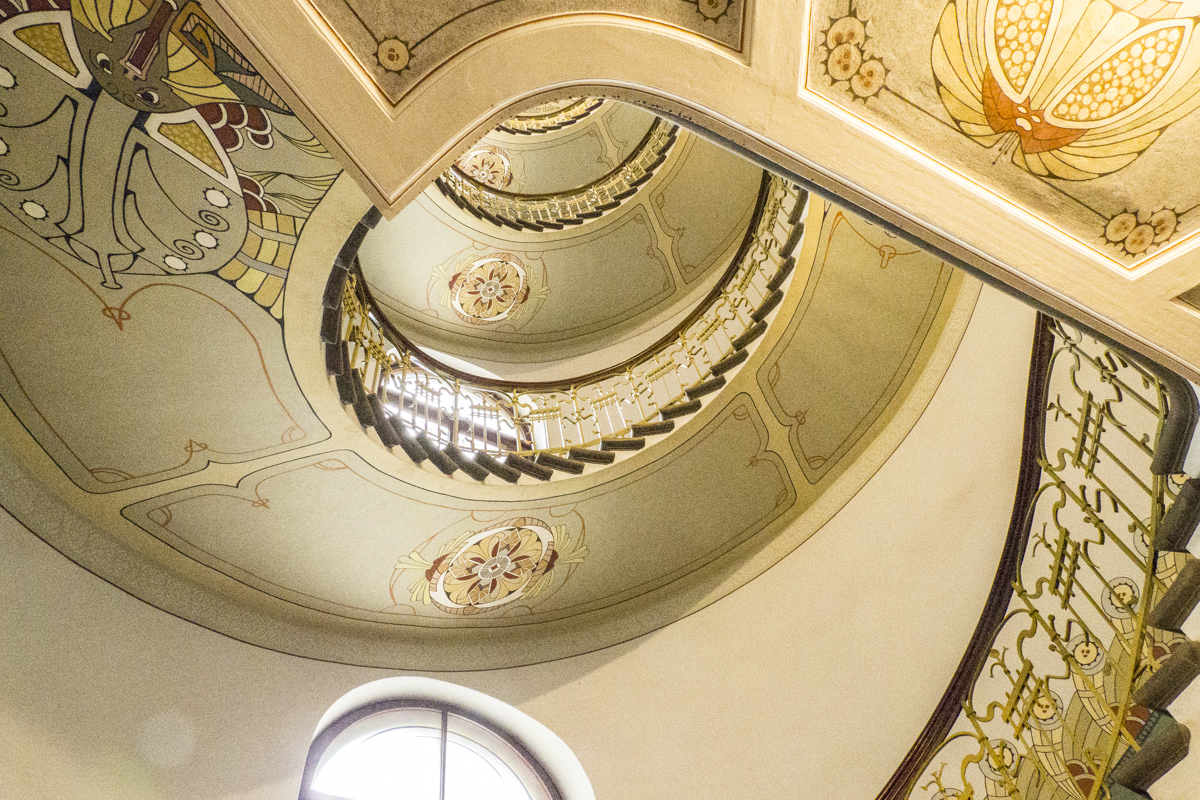 An authentic interior, including some of the original flooring and pipework, has been re-created in the apartment where Pēkšēns lived. It occupies the first two floors of the building. The sitting room is the centrepiece. The hosts would have received their guests here and they would have drunk tea while chatting and maybe indulged in some singing and dancing. Its outstanding feature is the stucco decorated ceiling featuring daisy blossoms. A wooden Art Nouveau decorated screen separates the bay window from the room 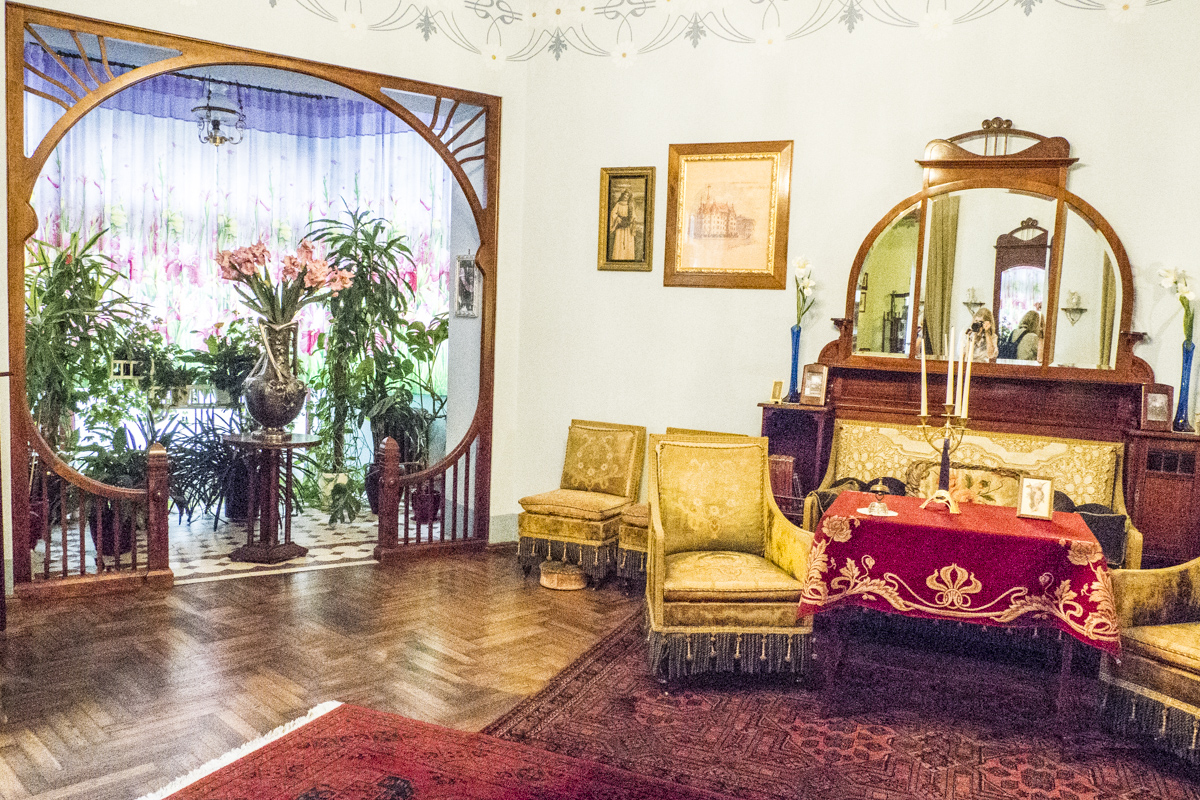 The fireplace room is just what the name implies, a place where hosts and guests sat around the fire chatting and drinking. Manners, tradition and virtue were highly valued in the dining room, the most luxurious room in the apartment. Family and guests would have dined here. It is the only room with stained glass windows and still life paintings on the ceiling. Roses decorate the bedroom where the owners would have enjoyed some privacy. Roses are popular in Latvia featuring in its art, designs and folk songs. The kitchen was vital to the well-being of the residents. During this period the work in this room was helped by new innovations including refrigerators, modern stoves and cast iron sinks with taps. A maid would have occupied a small, basic room adjacent to the kitchen. A maid was essential during this era and apart for cleaning the house and mending clothes she would also probably have been charged with the security of the house. Hygiene was highly rated during this era so a bathroom would have been essential as a symbol of cleanliness. And the latest invention, the flush toilet, had become the latest compulsion. 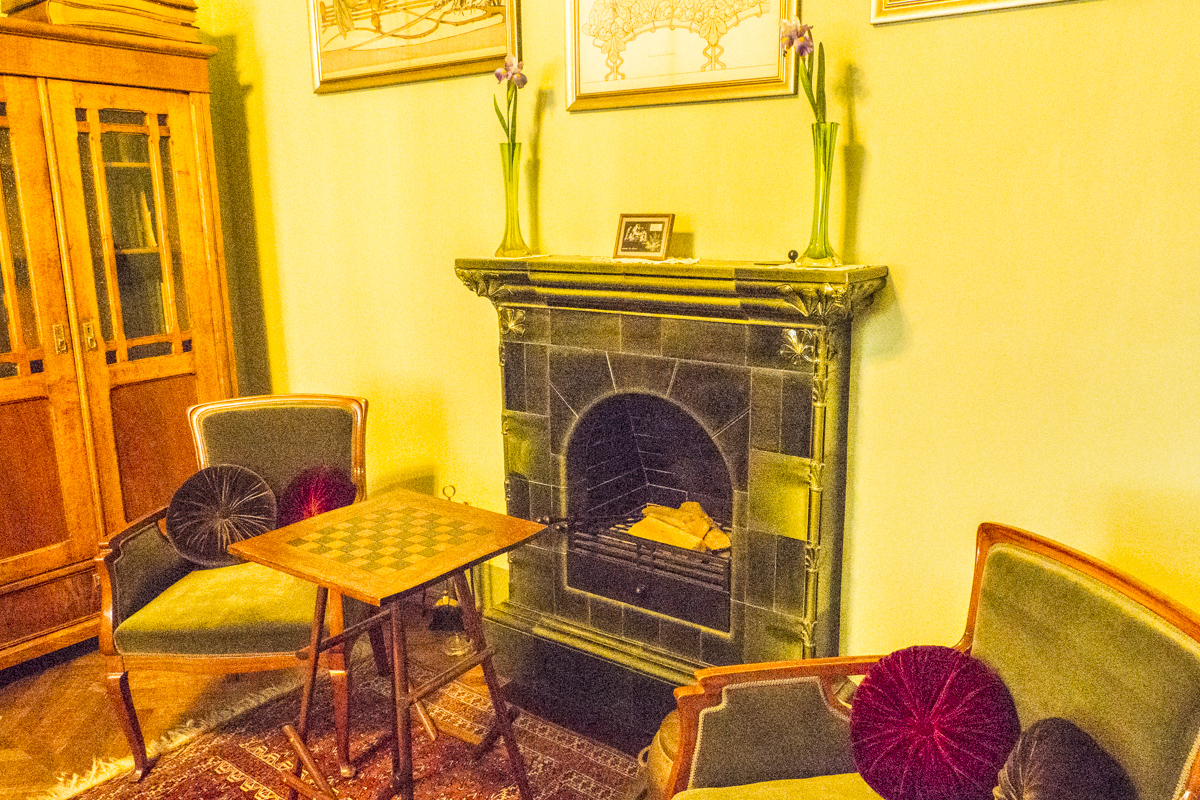 In 2016, the basement of the building was opened to visitors. It features a fascinating interactive digital exhibition that tells the story of art and architecture of the Art Nouveau period including fashion trends. Videos of people wearing the fashions of the day are projected on to the walls creating the eerie sensation that they have just walked through the wall of the room. Better informed about the history of Art Nouveau I set off to explore Riga and to see how many Art Nouveau buildings I could recognise. They are everywhere and used for a multitude of different purposes – residential blocks, hotels, banks, shops and restaurants. Records are kept of all the Art Nouveau buildings there is a list of all these buildings in Riga. 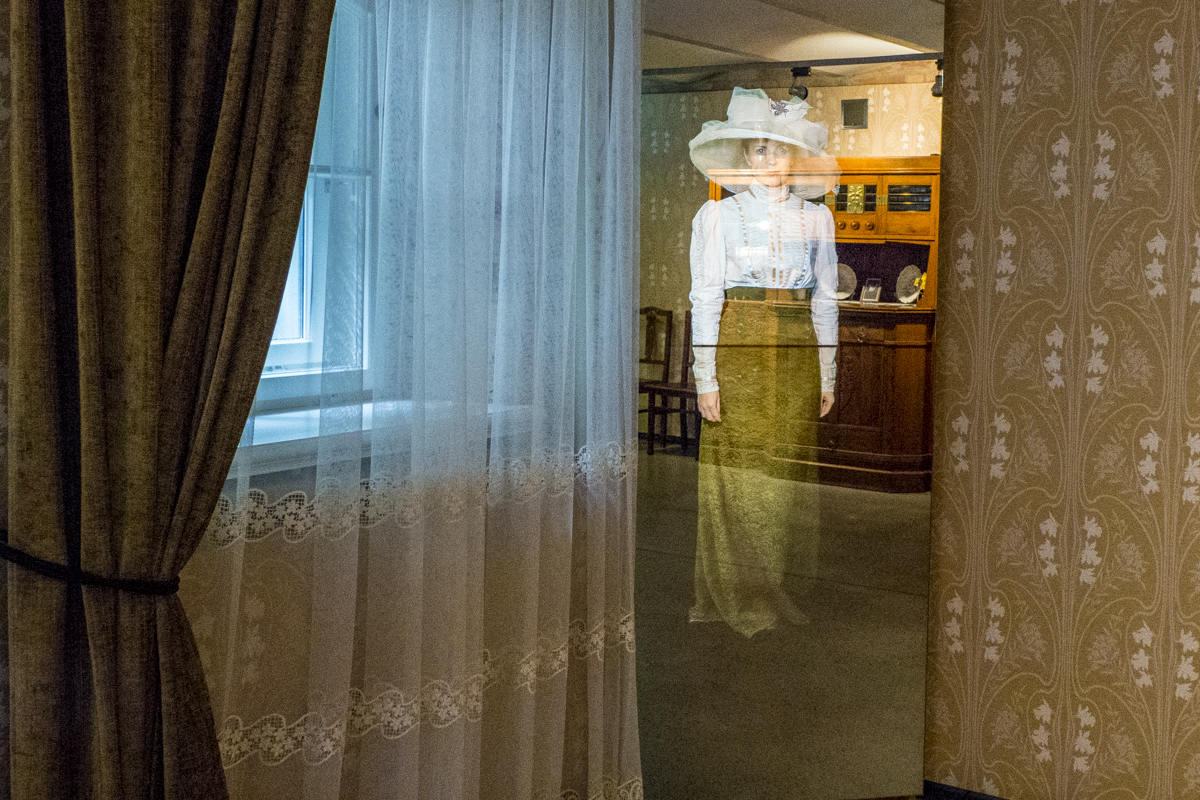 Where to Eat in Riga, Latvia

I had two very different eating experiences in Riga. Both very enjoyable The first was at the award winning Kolonade. This gourmet restaurant is perfectly situated on the edge of the Bastejkalna Park close to the Freedom Monument, the Latvian National Opera and the Laima Clock – the best view in the city centre. My meal was excellent. I started with a herring starter followed by trout for my main course and then finished with a pistachio cream dessert. Each dish was beautifully presented and absolutely delicious. 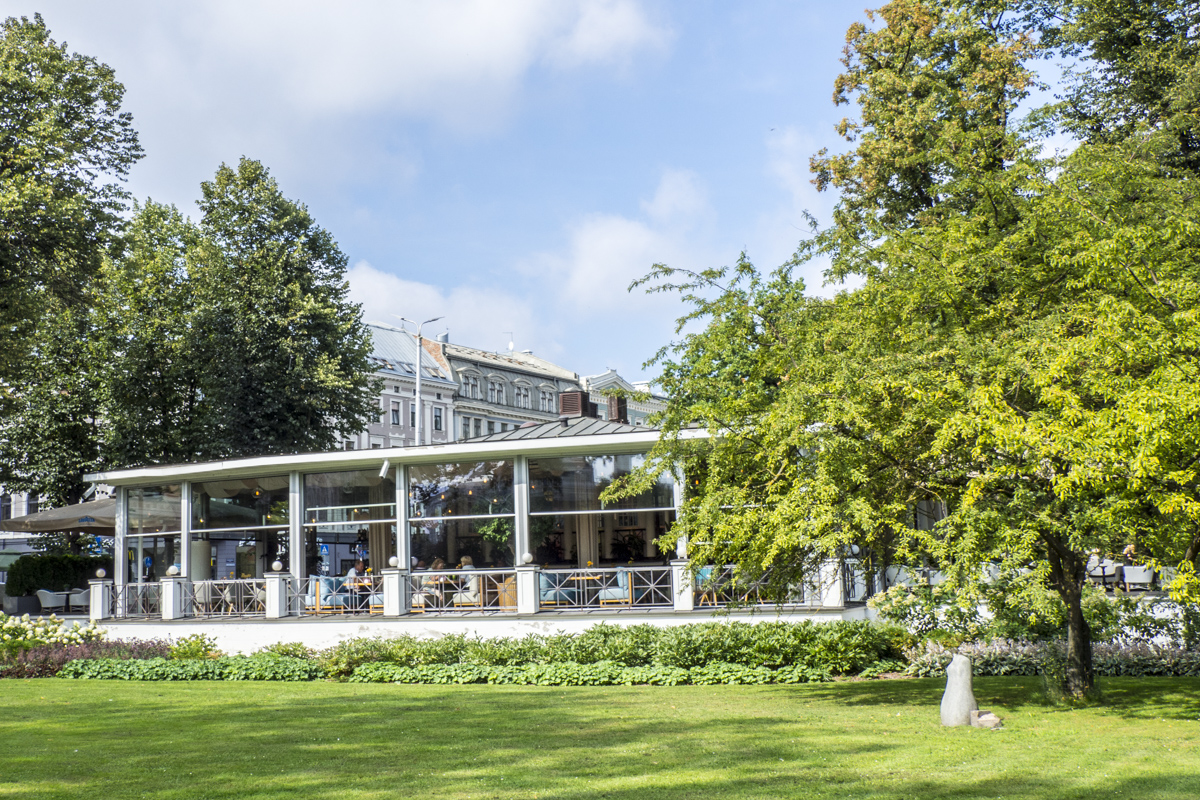 Istaba is a very small restaurant on the floor above the Istaba Art Gallery Krisjana Barona iela 31b, Riga 1011, Latvia. It is very atmospheric with tables surrounding an open square with view of the gallery and the art on display below. The food is freshly cooked, simple and delicious. I started with a fresh salad and home baked bread accompanied by a selection of dips many flavoured with ginger which is popular in Latvia. My main course was a perfectly cooked trout and I finished with a brownie accompanied by some vanilla ice-cream – both home-made and scrumptious. 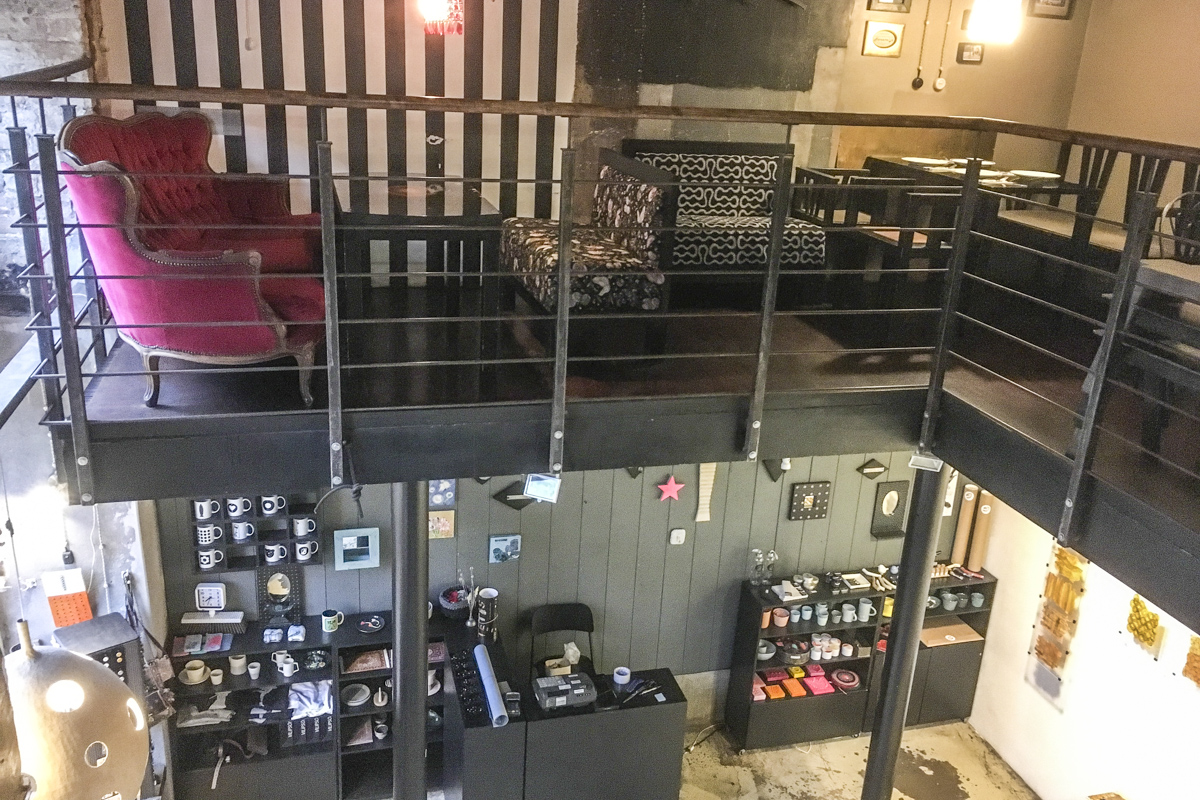 Where to Stay in Riga, Latvia

I stayed at the Metropole Hotel is very convenient for the train station and also the old town of Riga. It has everything I need when on a city break – a comfortable room, WiFi and a good breakfast to start my day. The staff were friendly and efficient and I was very grateful to the receptionist who helped me unravel the mysteries of the tram system to the suburbs of Riga. 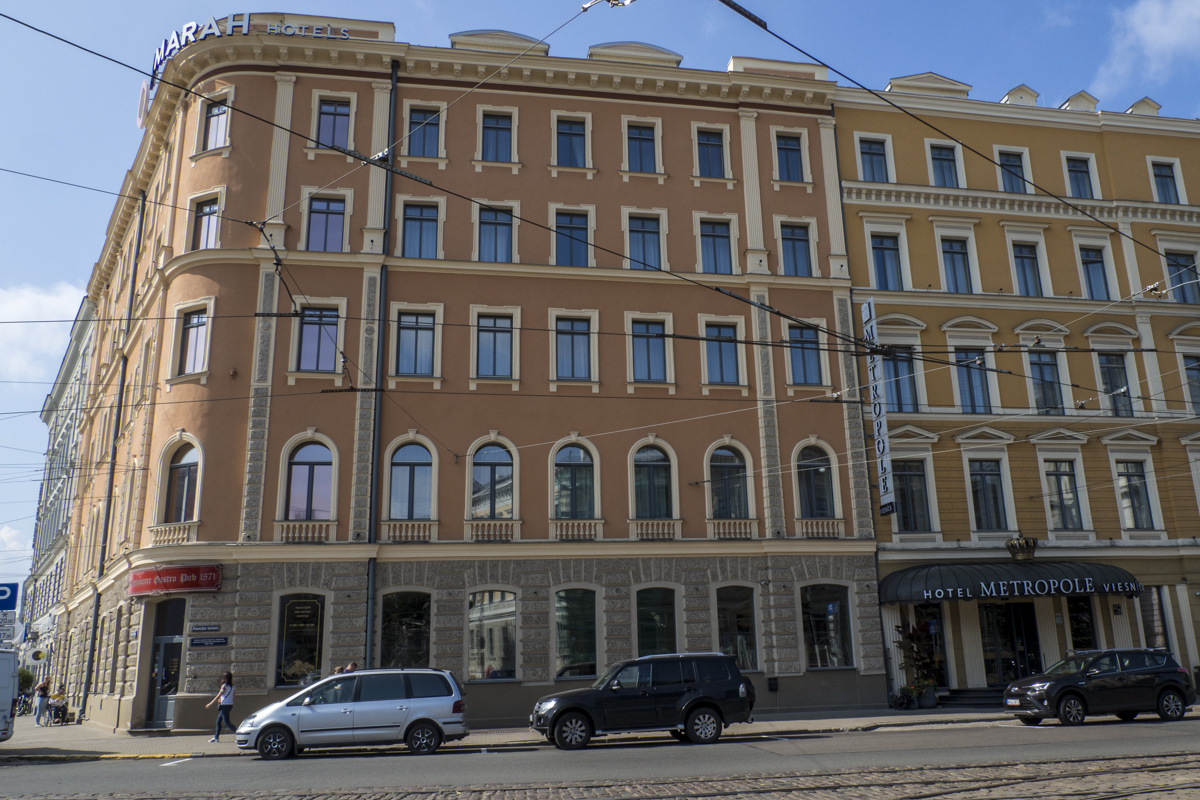 Getting to Riga in Latvia

Air Baltic operates direct flights to Riga. There is public transport available from the airport to the city centre and at very reasonable prices.