Touching, Tasting and Listening to London

Travelling with groups organised by TravelEyes has brought a whole new meaning to sightseeing for me. In London we touched iconic buildings, tasted traditional cuisine and listened to the music of the Regimental Band marching to Buckingham Palace. 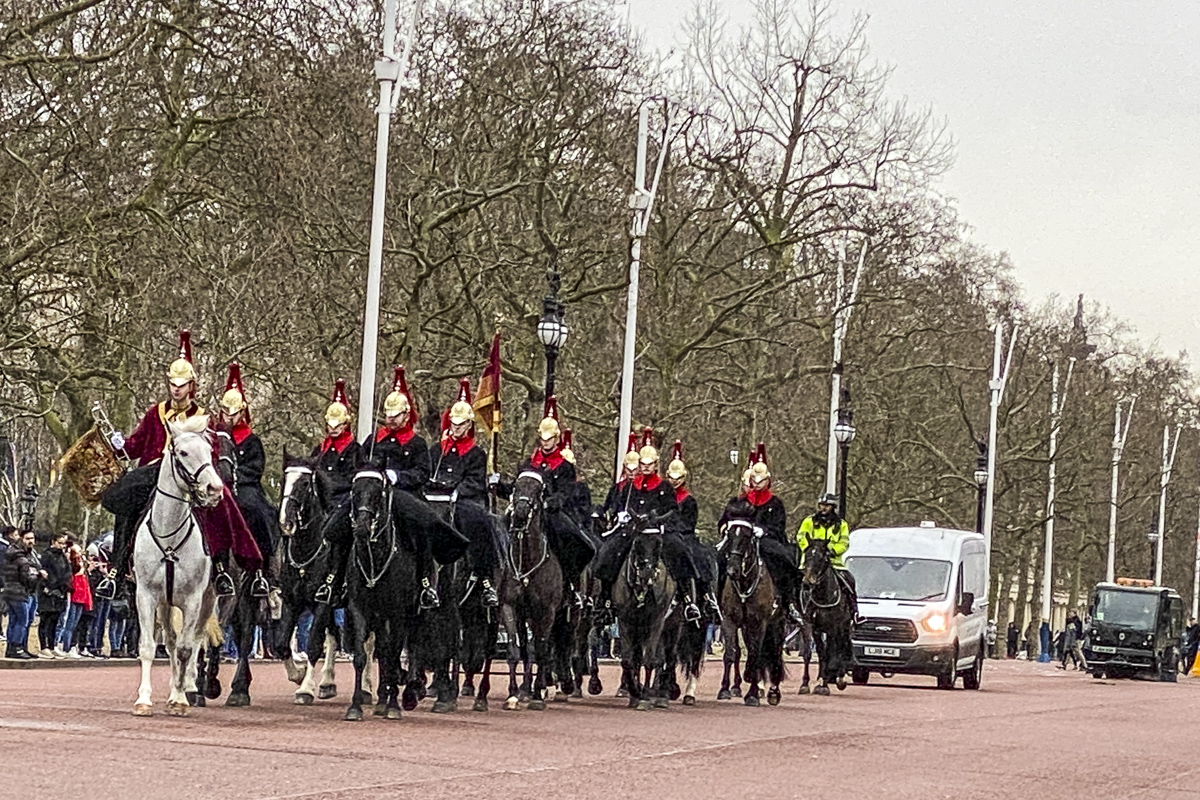 Our tour started in Parliament Square. It was led by Robin Spencer who works with Free London Walking Tours. After leaving Parliament Square we walked down Birdcage Walk alongside St James’s Park. Robin’s commentary was peppered with fascinating stories including the provenance of the London Plane tree and the origins of street names. For example, Bird Cage Walk was originally the home of an aviary created by James 1 and enlarged by his grandson, Charles II. The birds were kept in cages that were hung on the trees lining this road. 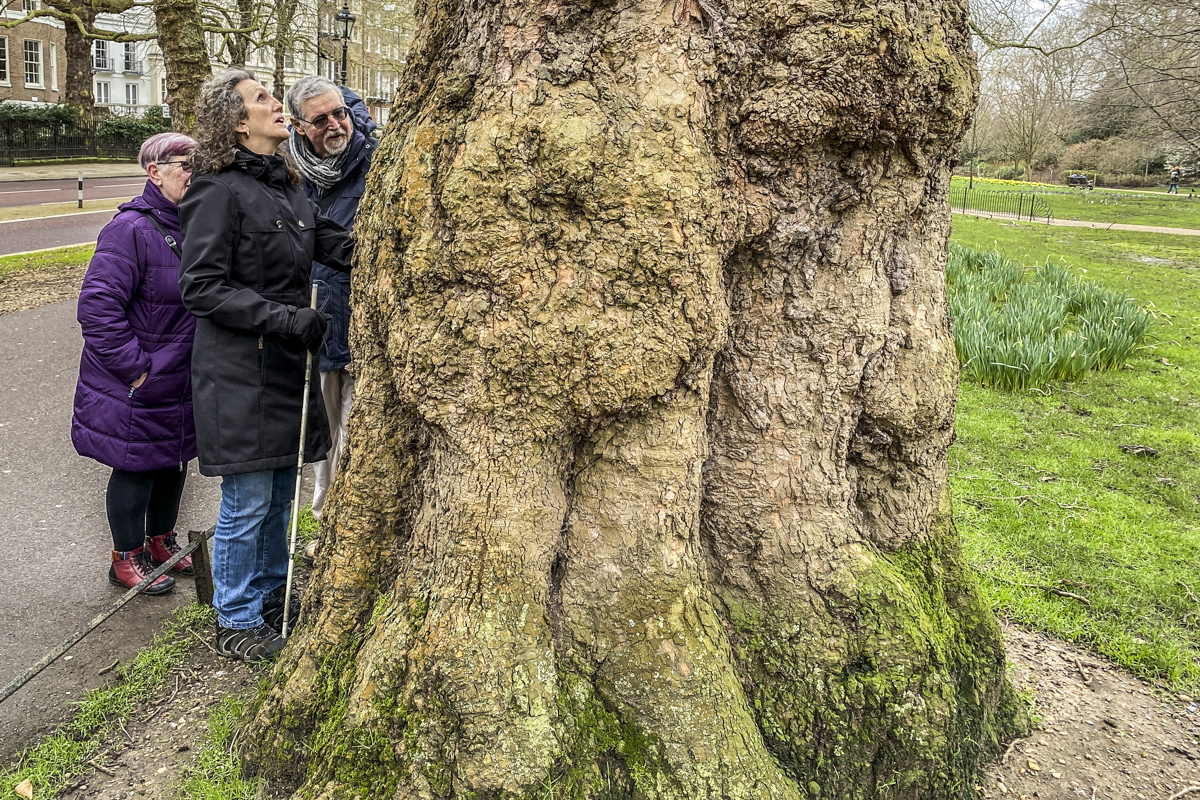 We reached the far end of Birdcage Walk in time to watch an element of the daily ceremonious Changing of the Guard outside the Wellington Barracks, also the home of the Guards Museum . The ceremony takes place between three locations involving the new guard, the old guard and the Household Cavalry. The Regimental band that would accompany the new guard was rehearsing so we were able to listen to the music before they marched off with the new guard. As we made our way down The Mall towards Trafalgar Square we were passed by members of the Mounted Regiment of the Household Cavalry. We stopped to listen to the clip clop of hooves and the jangle of harnesses. Our tour ended in Covent Garden where we were treated to a very common event in London – a shower of rain – causing to dive into the nearby Maple Leaf. We dried off and enjoyed some rustic Canadian food before returning to Covent Garden to enjoy the bustle of the market and the banter of the buskers. 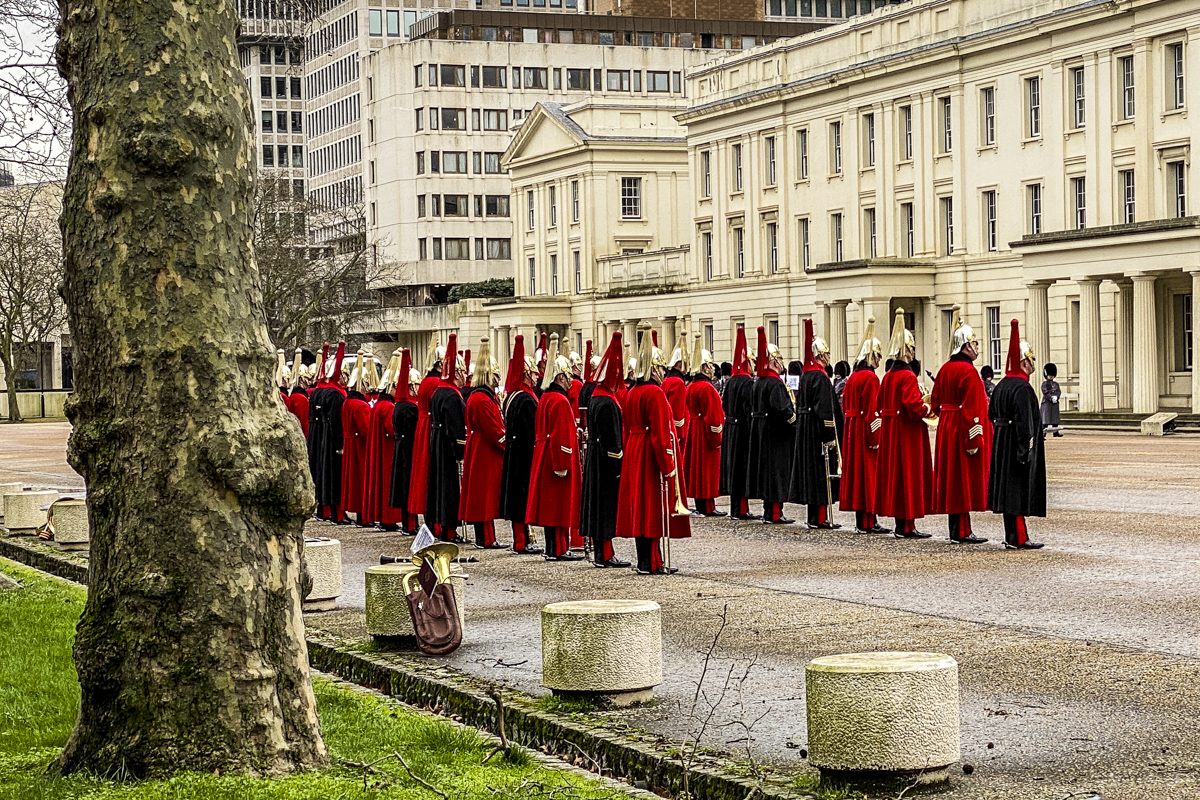 Guided Descriptive Tour of the Tower of London

Our second day in London started at the Tower of London with guided descriptive tours of the Jewel House and the White Tower. We met our guides, Phoebe and James in the Welcome Centre before entering the tower itself – a misnomer as there are actually seventeen towers in a large complex. They both wear very distinctive costumes and they allowed us to touch the brass buttons on their cuffs, touch the ER insignia on their lapels and feel the gold band and buckle on Phoebe’s top hat. It was a great start to an excellent tour. Phoebe took us around the Jewel House where we were able to touch models of the most famous items that are kept there. As the Crown Jewels and other articles relating to royal living were paid for by the state they belong to the state and are kept under guard in the Jewel House unless they are being used by royalty. When we finished exploring the Jewel House we moved on to the White Tower. 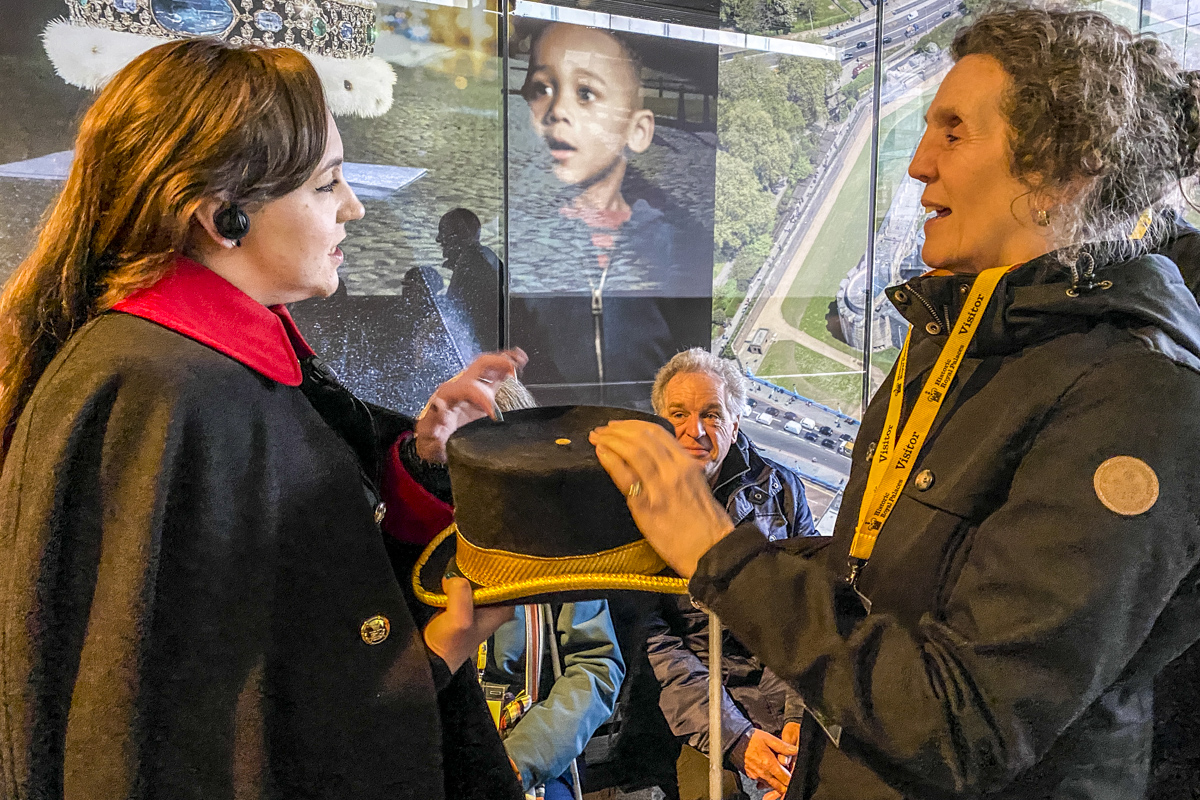 In the White Tower James concentrated on a collection of armour including rare pieces made for both noblemen and common soldiers. It features as collection known as the Line of Kings established by Henry VIII and including several suits of armour he had made for himself and also the gilded armours of Charles I and James II. Probably the first exhibition to be established. We also went beyond the barriers in the lovely Chapel of Saint John The Evangelist and sat on the simple wooden pews while James described it to us. Our fabulous tour lasted until we ran out of questions and then had to rush off to our next assignation in Spitalfields a food tasting tour. 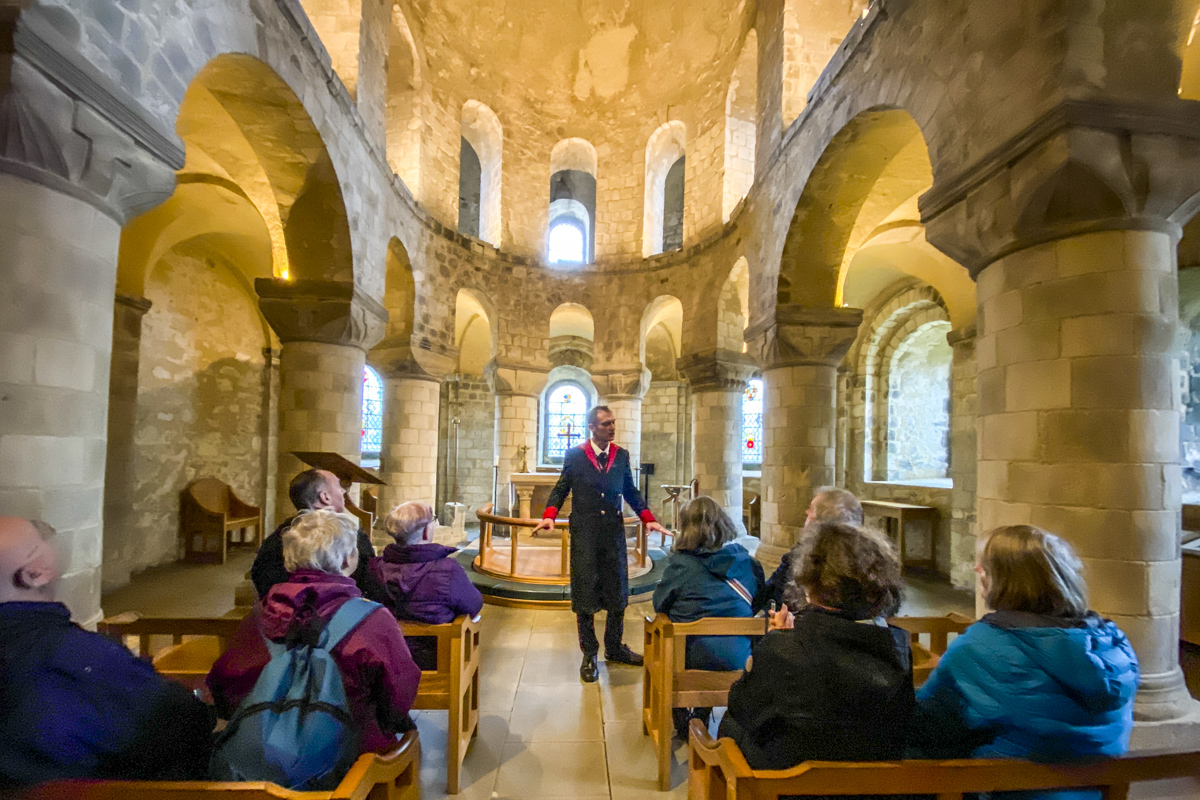 Food Tasting Tour of the East End of London

We met our guide, Lauren, near a hand-sculpted white goat standing on top of a stack of packing crates. A symbol of persecution and sacrifice this goat represents the different communities that, over the years, have found sanctuary in this area. Our tour was organised by Eating Europe. We started with a brief history of Spitalfields, a lively area in the East End that is home artists and a large Bangladeshi community. It is famous for street art, quirky shops, trendy bars and the Victorian Spitalfields Market . Our first stop was a tasting of English cheeses and artisan bread at Bedales in the market. We then moved on to fish and chips at Poppies (and the most expensive cup of English breakfast tea in the area). This was followed by a tasting of three great curries at Aladin in Brick Lane. Our vibrant surroundings included a brilliant mural combining icons from English and Asian cultures. We tasted ale and cider at the local pub, the Pride of Spitalfields before finishing with bread and butter pudding at the delightfully old-fashioned English Restaurant. It was both interesting and great fun. 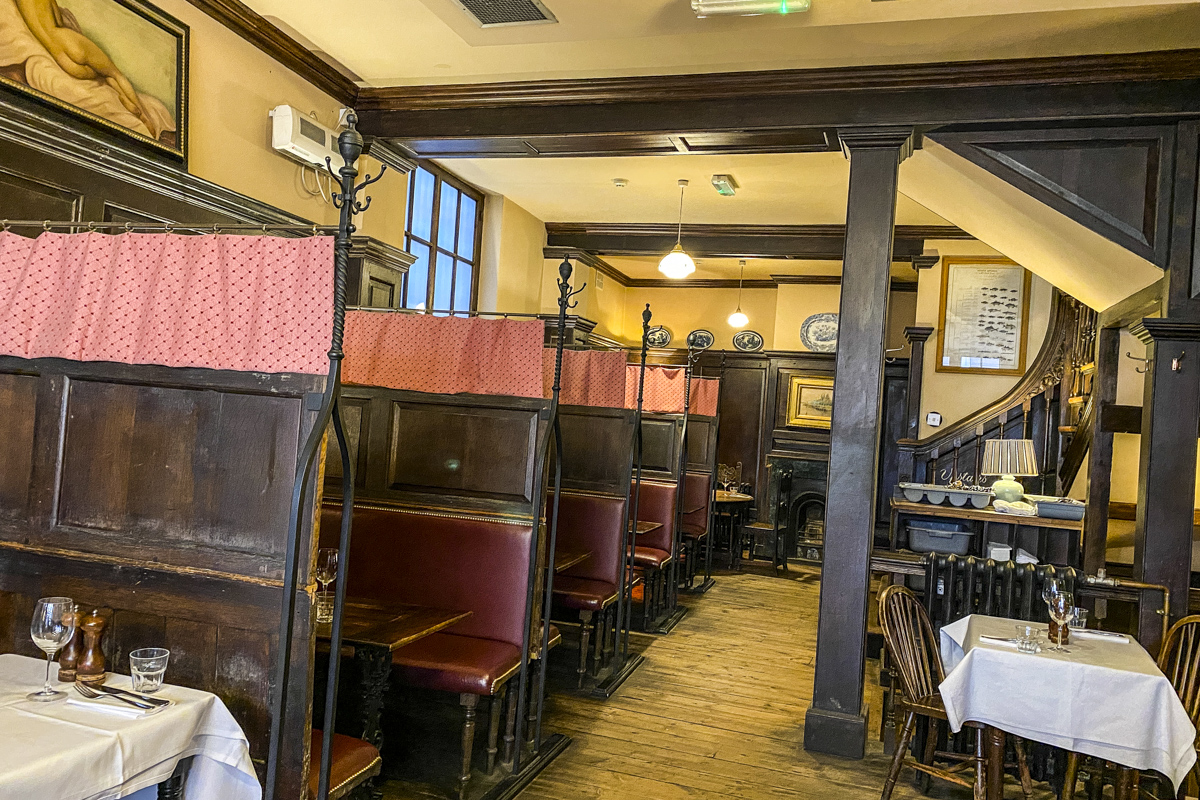 Our last full day in London was another very special one and started at St Paul’s Cathedral with a stroll around the churchyard which has some interesting sculptures on display including a bronze representation of Thomas Beckett who was assassinated in Canterbury Cathedral. When we went inside we joined our guide, Gill, for our touch tour. Nothing that we could reach was out of bounds and we touched doors, walls, pews, tombs and the huge candlesticks that stand guard just inside the West Entrance. We sat in the seats reserved for royalty in the Chapel of St Michael and St George Chapel and spent some time exploring the quire where the clergy sit. We finished our tour in the large crypt of the cathedral where we had lunch in the café before setting of for the Palace of Westminster, home of the Houses of Parliament. 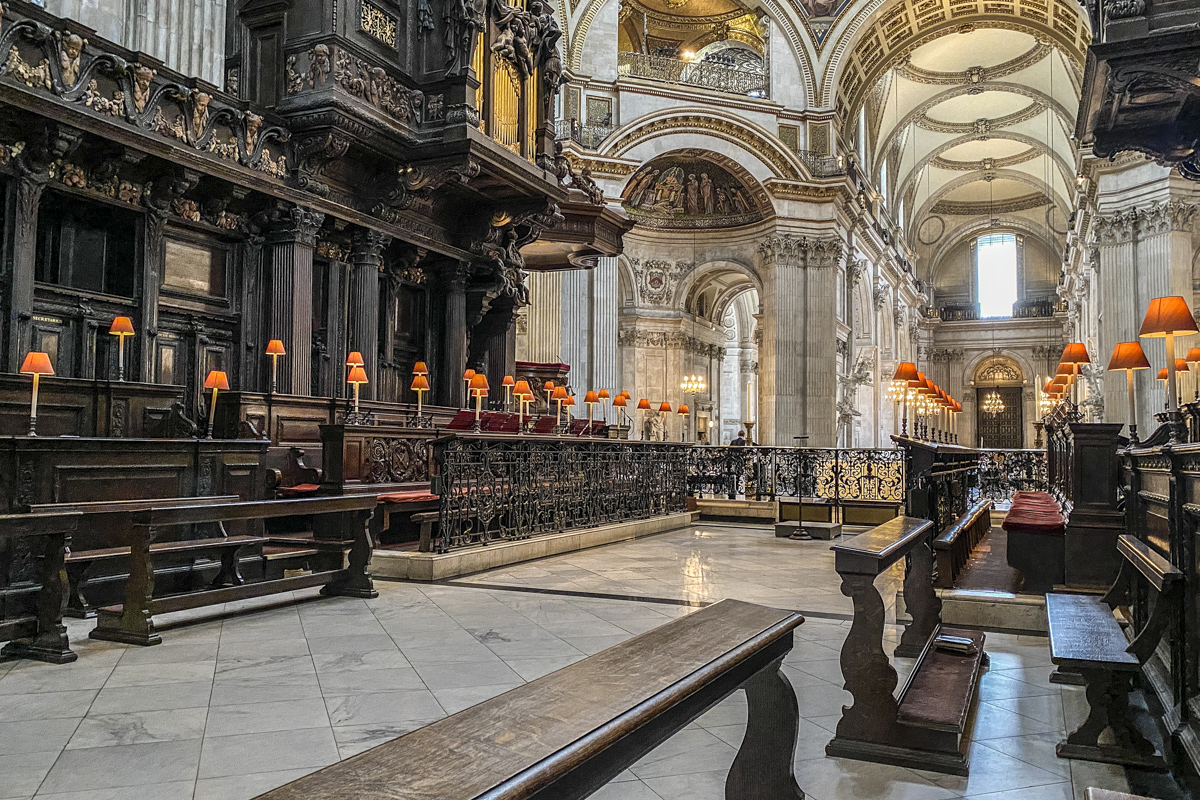 Guided Tactile Tour of the Palace of Westminster

After wandering along the Embankment to the Palace of Westminster and going through airport-style security we were treated to a welcome cup of tea and an informal chat with our guide Tracey. We started our tactile tour in the massive Westminster Hall where we were joined by Paul, a Doorkeeper here, in the traditional uniform and Phillip another guide. After learning about this, the oldest building in the Palace and admiring the original wooden roof we moved on to the Lords Chamber. 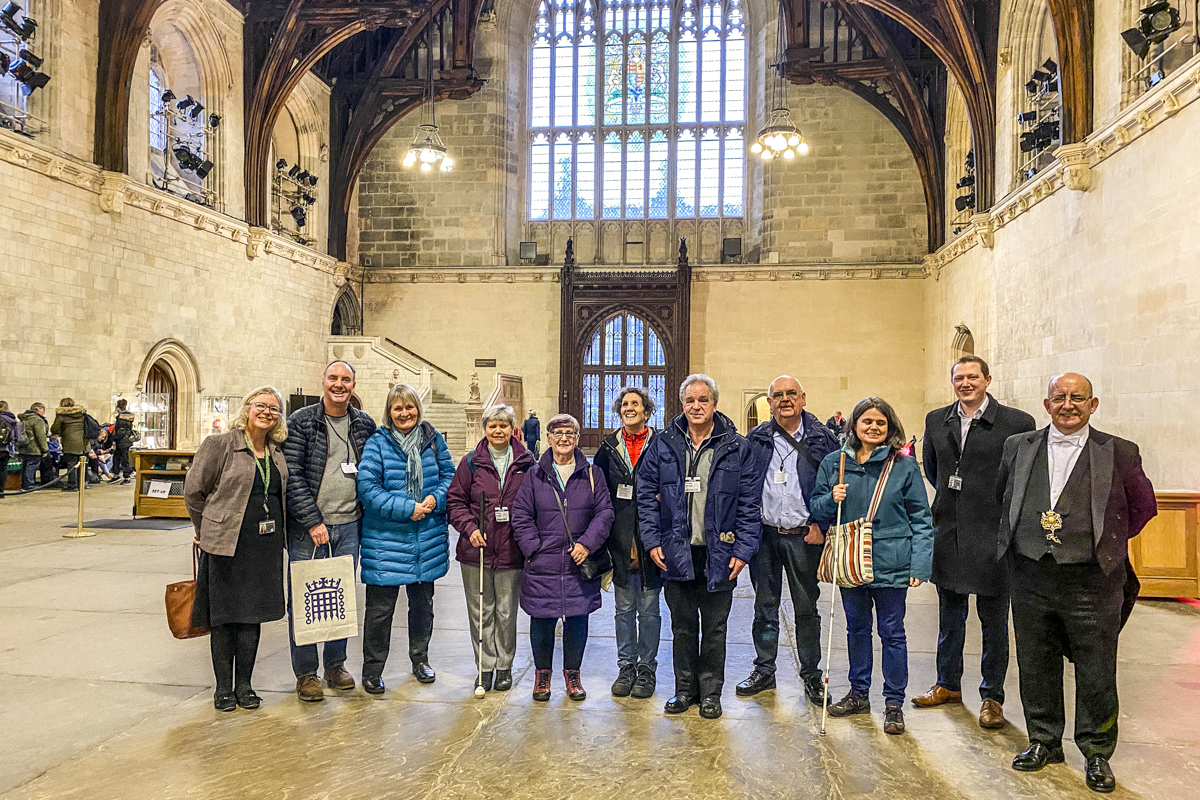 The Lords Chamber is the most decorated room in the Palace of Westminster. We lounged on the plush red leather seats and sat on the woolsack as we listened to descriptions of the elaborately decorated throne that the Queen sat on during the state opening of Parliament that marks the beginning of the Parliamentary year. We also listened to a recording of the Queen addressing the members. We then moved on to the much simpler Commons Chamber where we took it in turns to sit in the Speaker’s Chair and shout Order! Order! We were then played a recording to hear how it should be done. Paul explained his duties as a Doorkeeper – one of thirty-seven in the House of Commons. He was more than happy for all of us to touch the gold badge of office he wears around his neck on a gold chain. It was all very informative and very enjoyable. And again, as was true of all the guides who led our tours, they were very generous with their time. It was a wonderful trip thanks to all of them. 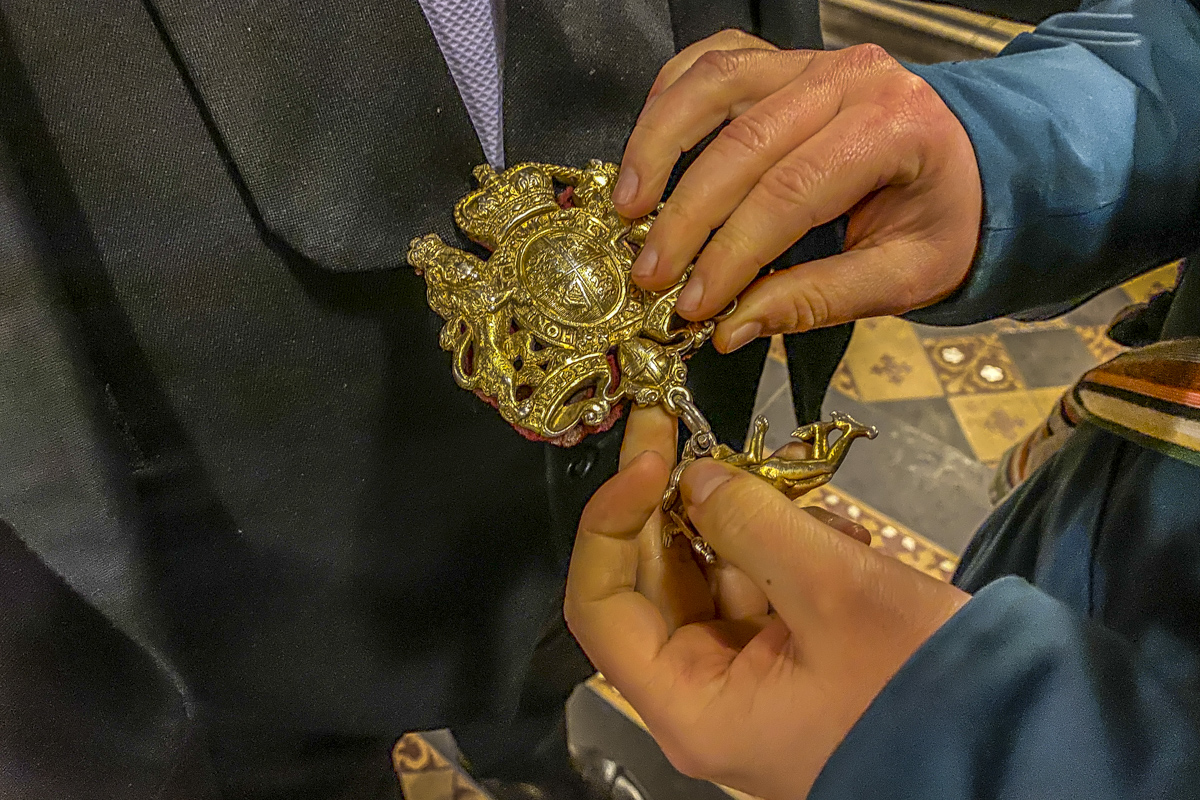 Where to stay in London

For those who like something quaint and quirky I can highly recommend the Fox and Anchor in Farringdon near Smithfield Market. This genuine London public house occupies a Grade 2 Listed Building and offers five individually decorated bedrooms and one suite. Tucked away in a side street and surrounded by old buildings it offers a genuine slice of London as it used to be but softened by the inclusion of all modern amenities such as WiFi, wide screen television and luxurious bathrooms. The cosy bedrooms are accessed by narrow flights of stairs whose walls are decorated with old photographs of the surrounding area. The ground floor is occupied by the bar that stretches back into the restaurant area where guests can dine in one of several wooden booths offering secluded dining. At breakfast, for which this pub is rightly renowned, hotel guests rub shoulders with workers from nearby Smithfield Market and stock-brokers from the City.
My booking was made through the website Stay in a Pub which has details of more than fifty unique public houses that offer accommodation in London. 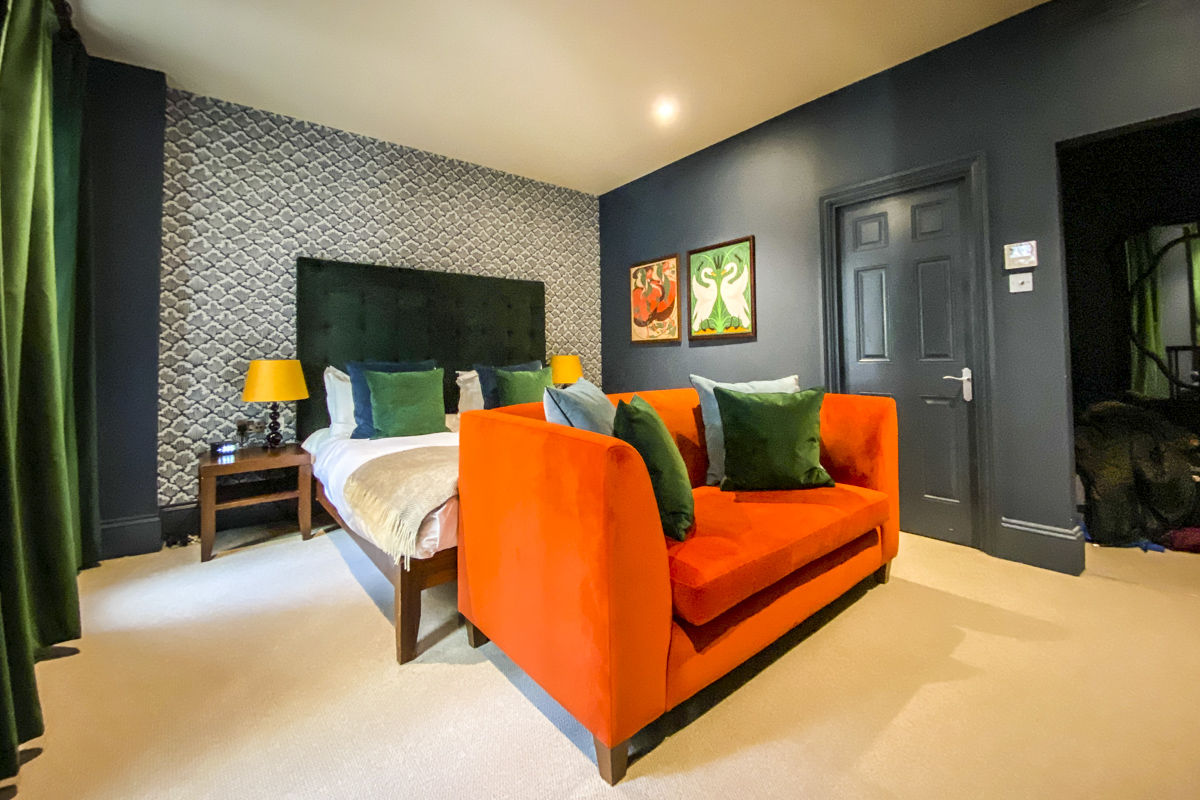 Alternatively, for those who prefer a larger hotel I have also stayed at the Corus Hyde Park Hotel on the Bayswater Road, opposite Hyde Park and close to Lancaster Gate underground station. This hotel is ideal for groups as it offers a variety of rooms in different sizes. The staff are friendly and helpful and it has a concierge service to help guests make the most of their stay in London. The self-service breakfasts offer a good choice but best to get there early as it gets very busy.