A Sunday Morning Stroll Around the Marais, a District of Paris

It was a crisp February morning when I emerged from the Metro at Pont Marie. The River Seine flowed sluggishly past me on my left and the district of Marais was on my right. I was immediately drawn to my right at the sight of an elegant hôtel particuliers for which this district is famous.

Le Marais is one of the oldest districts of Paris, capital of France. It was once, as its name suggests an area of marshland. Religious communities were the first to settle here a heritage reflected in some of the magnificent churches and a temple that still grace the area. In 1543 King François ordered the division of the Marais to cope with the expanding population of the city. It was soon popular with the royalty, the rich and the famous and today many of the magnificent buildings they lived in can still be seen and enjoyed today. These include several hôtel particuliers, not in the sense that hotels are known today but huge private mansions with several bedrooms where guests of the owners could stay. Good examples of these mansions still to be seen in the Marais are Hôtel de Soubise now the National Archives Museum and Hôtel de Sens, the oldest example of this type of building. 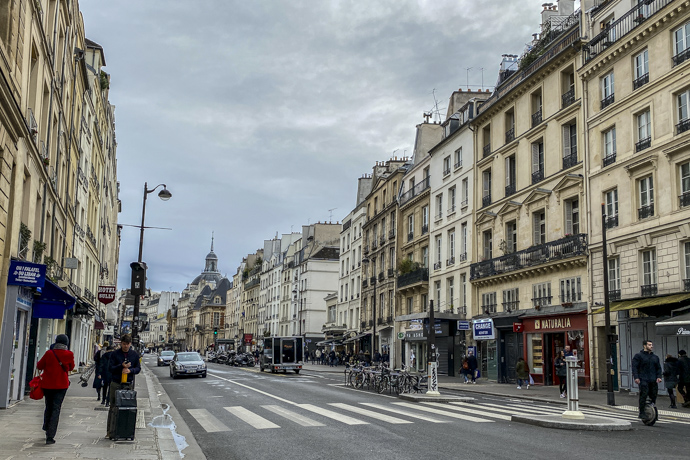 The Hôtel de Sens in the Marais, a district of Paris

A charming French-style garden still borders the back of the Hôtel de Sens. Neatly trimmed miniature hedges contain small flower beds, still very attractive even in winter. This garden is open to the public throughout the year. This building has an interesting history. It was originally built to house the Archbishop Tristan Salazar but it was fifty years before it was completed in 1591and he died that same year so he never actually lived there. Nor did his successors. From 1605 to 1606 the building was occupied by Queen Margot (Marguerite de Valois) whose marriage to Henry IV had been annulled by the Church in 1599 so that he could marry Marie de Medici. Riotous parties held during that period did not go down well with the people. Thereafter this building was rented out, seized during the French revolution to be sold to private companies and finally purchased by the municipality of Paris in 1911. 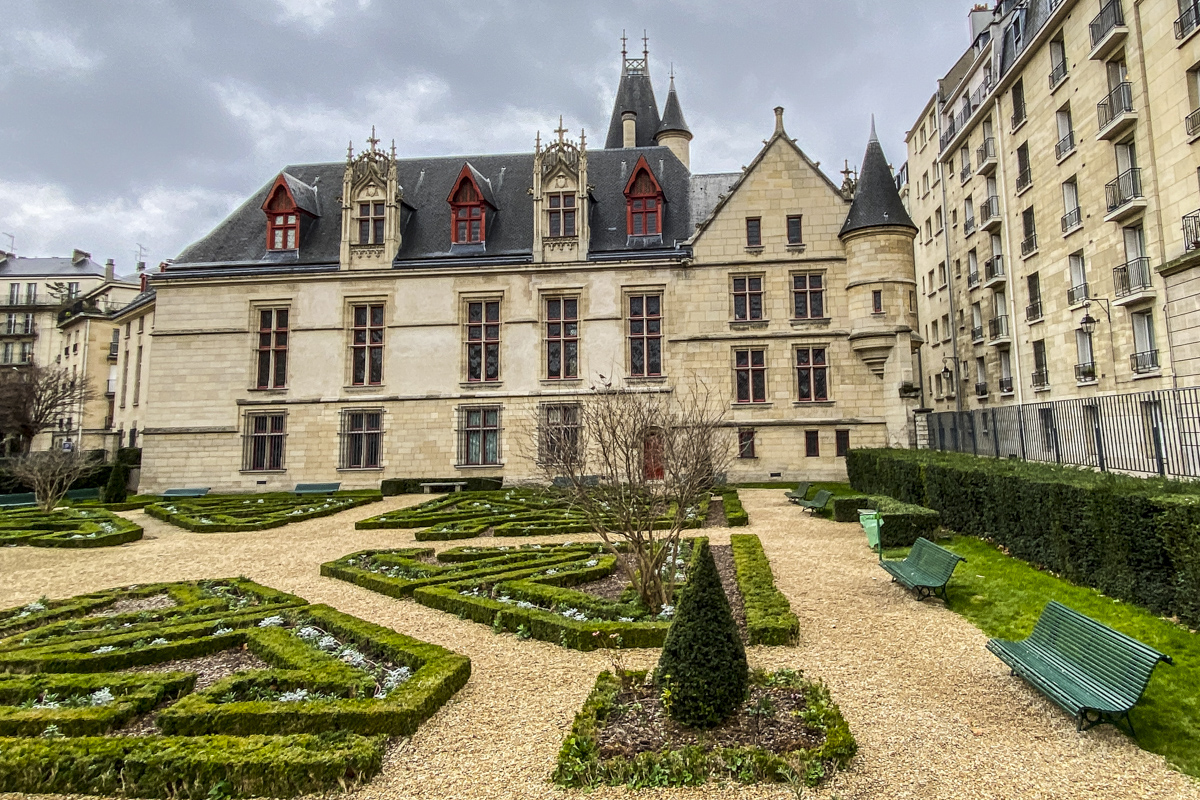 In order to preserve the medieval character of the Hôtel de Sens it has been subject to a complete restoration and now houses the Forney Library which opened to the public in 1961. Inside the building there are some rare remains of medieval architecture as well as thousands upon thousands of books, exhibition catalogues, newspapers and various collections dedicated to all aspects of arts and crafts. The Marais still has a very strong connection with the arts and is home to an international centre for artists from all over the world who come to study here and sell their work in a line of shops fronting the left bank of the Seine. Across the road at the front of the Hôtel de Sens is a relatively new garden, Marie-Trintignant Square. 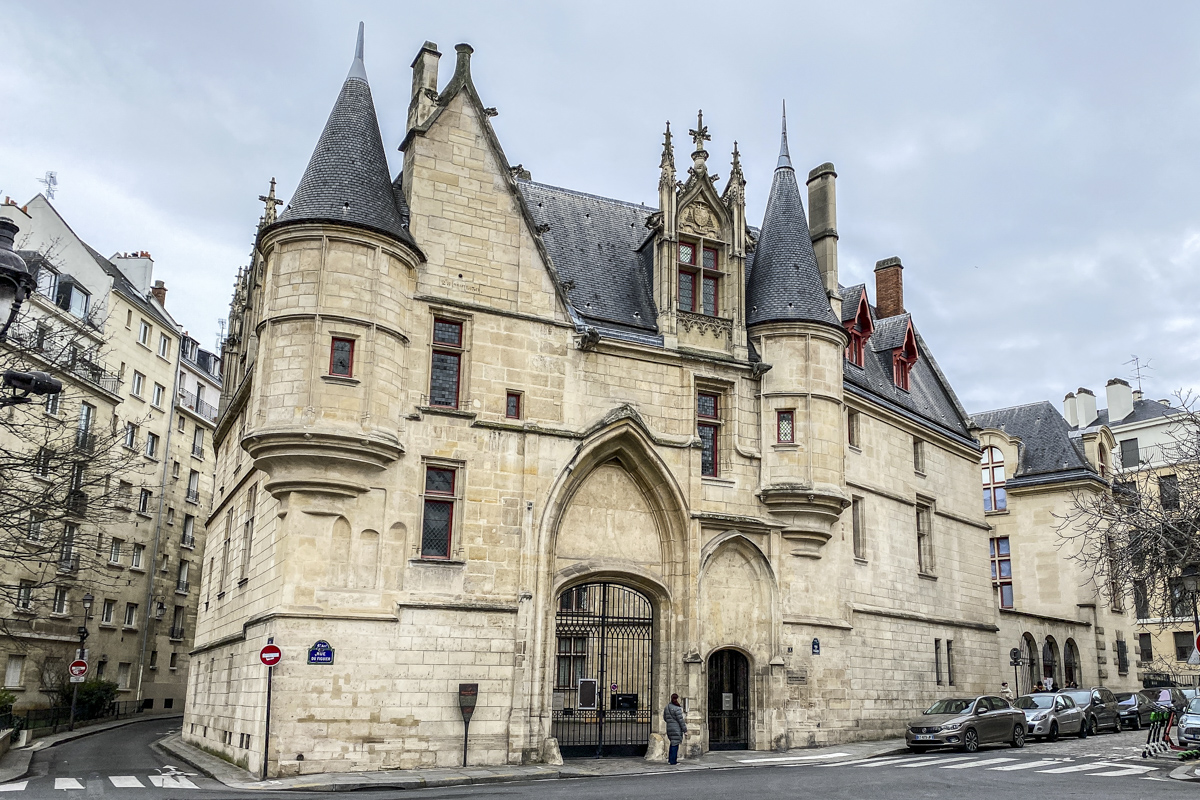 The Marie-Trintignant Square in the Marais, a district of Paris

When the Marie-Trintignant Square was laid out in 1993 it replaced an open concreted area. Initially called Square de l’Ave Maria when it was re-designed in 2003 it was re-named and is now Square Marie Trintignant after the French actress who tragically died in 2003. She is buried in the Père-Lachaise cemetery. Lilac trees and fig trees were planted in the garden on a carpet of greenery. Fig trees are significant as there was once a jam factory in the area that made jam from figs. 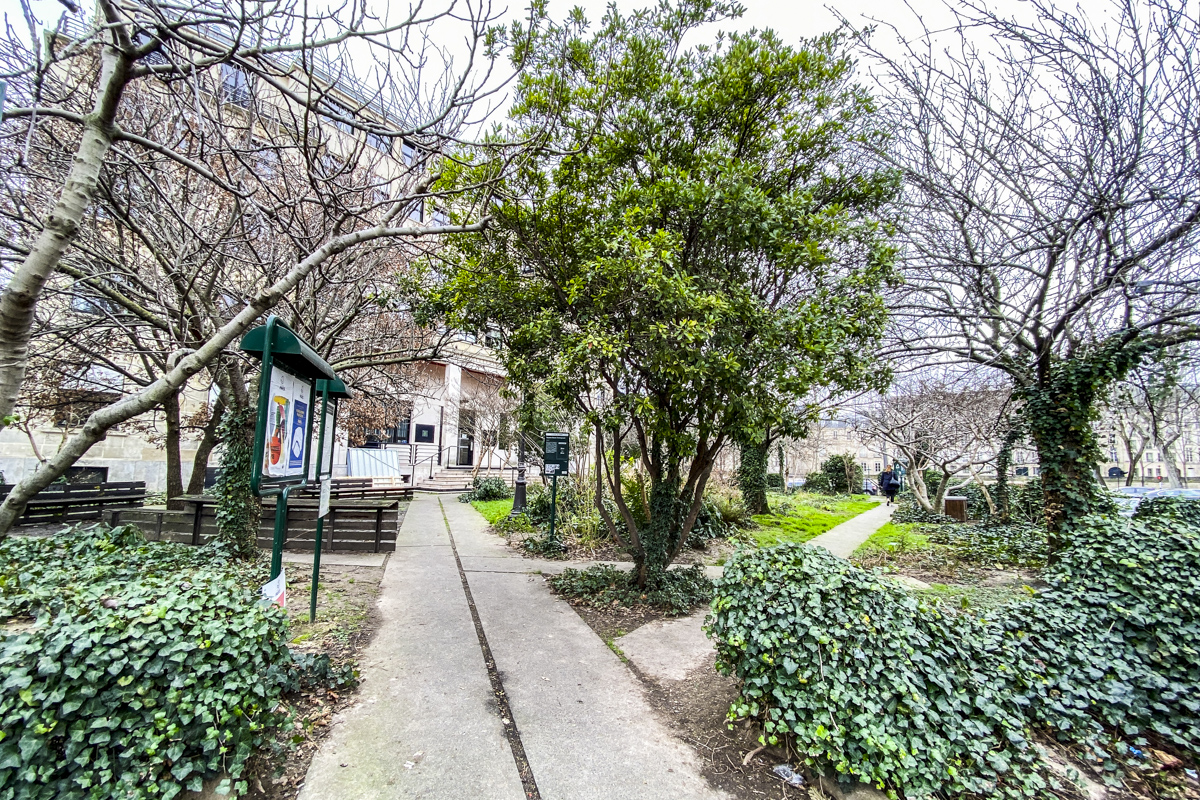 Another person buried in Père-Lachaise cemetery who also left his mark in the Marais is the Englishman Sir Richard Wallace who gifted public drinking water fountains to the people of Paris so they would have a source of clean drinking water. Now referred to as Wallace Fountains these dark green fountains, designed by Wallace himself are dotted around the Marais and have become an iconic symbol of Paris. 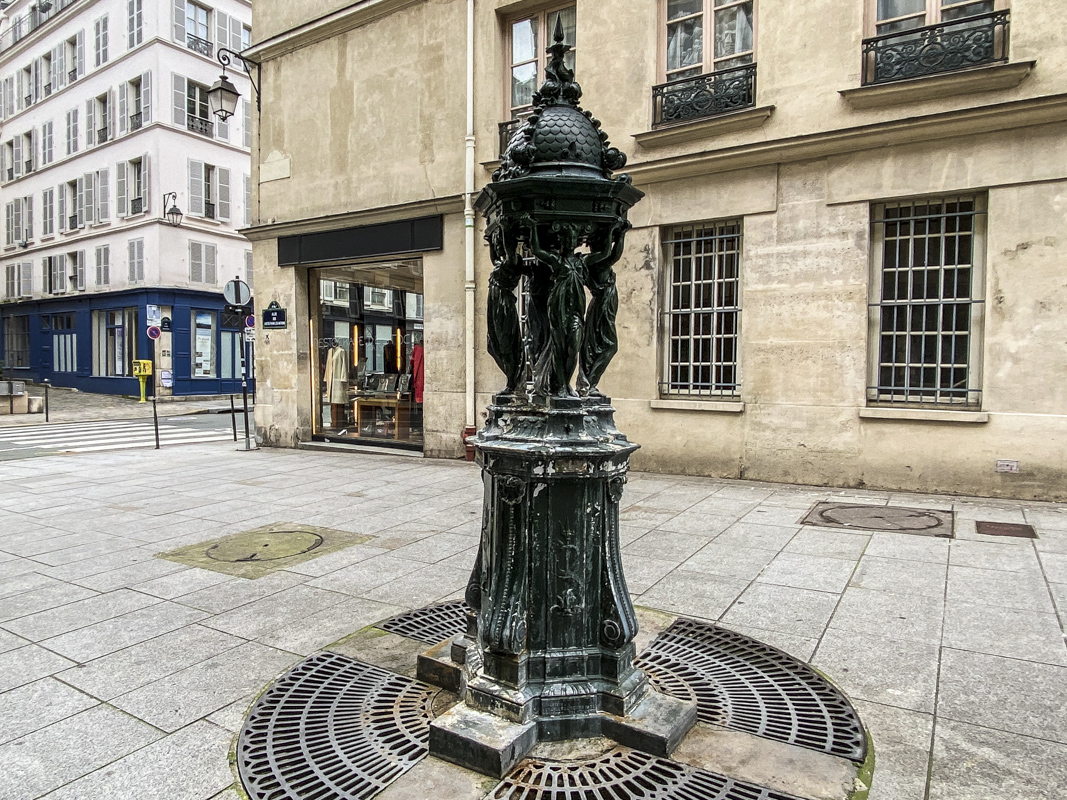 Signs and Symbols in the Streets of the Marais, a district of Paris

Some very interesting old doors border the streets of the Marais. I found one that was high enough and tall enough to admit a coach and horses. Behind this door is a courtyard where the coach would have turned around. In front of the door two stone, curvy shaped bollards protected the entrance from coaches making too sharp a turn into the building. Door knockers were also placed at a height to accommodate visitors arriving in coaches or on horseback. Reminiscent of the days when people could not read or write I found a large stone carving of a knife grinder indicating the business that was carried on in that building. 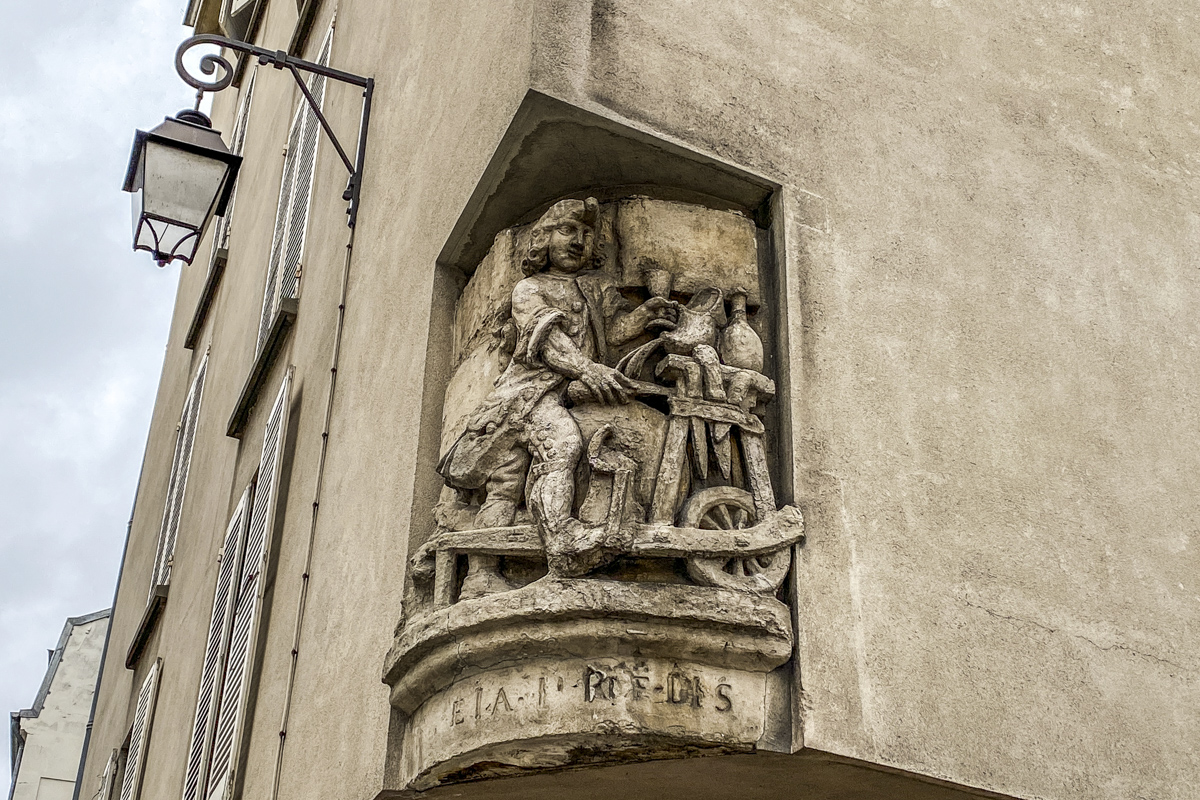 A tradition that is still followed today as illustrated by a beautiful example above a shop selling materials of artists. 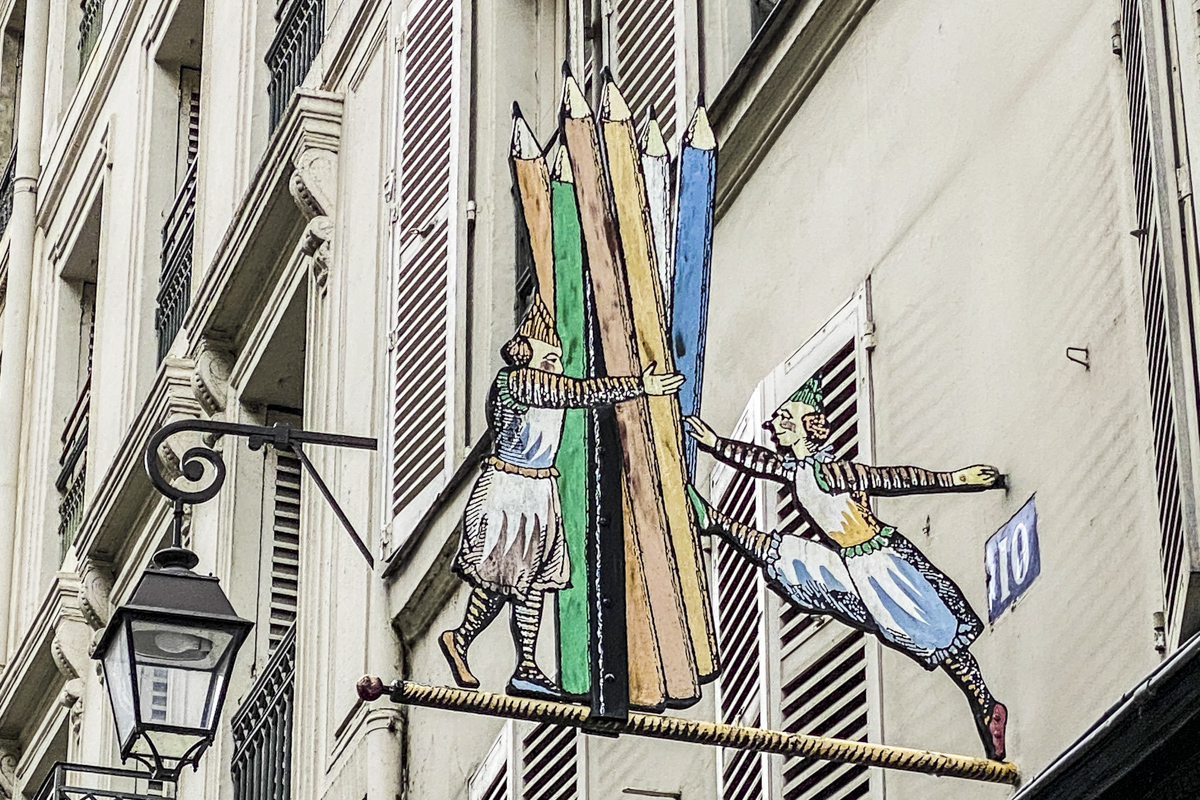 Some of the older buildings still exhibit the traditional symbol of Paris, a boat, carved in stone 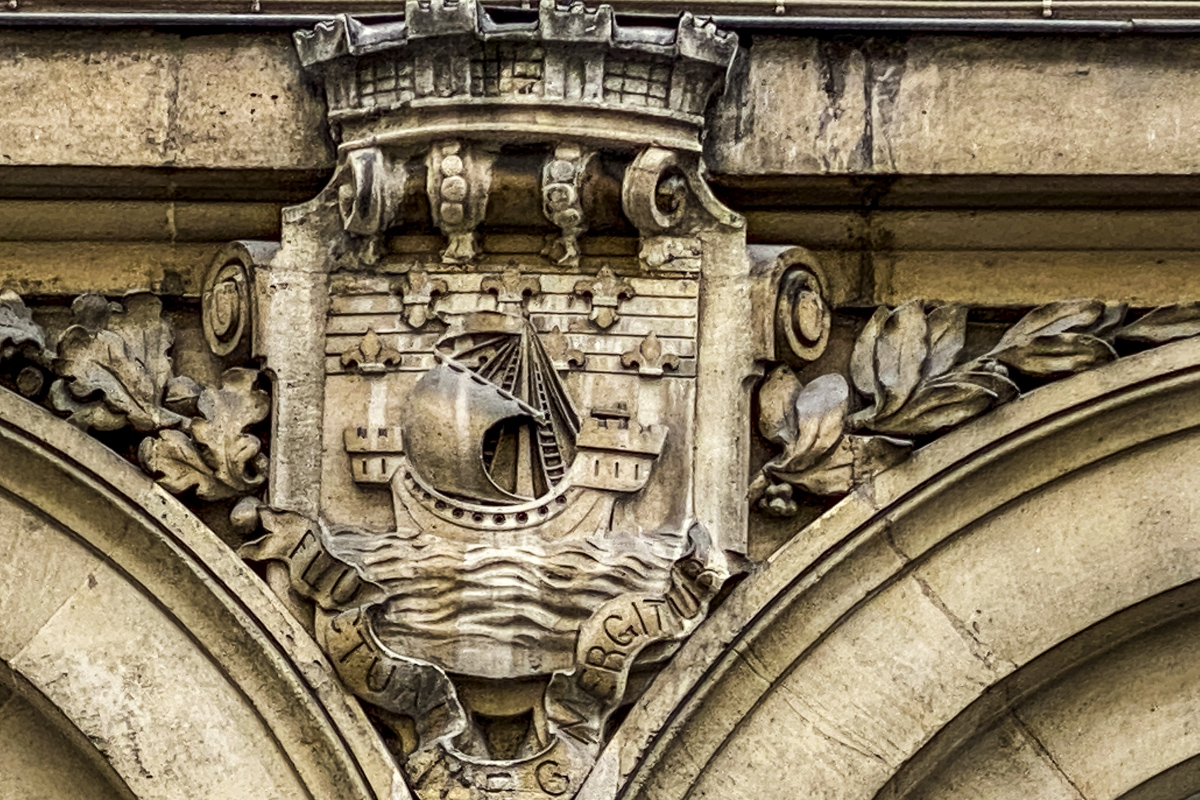 Today this symbol has been modernised is used on plaques relating the history of the oldest buildings in the area – but only in French. As I wandered around I began to wonder what the attraction was as locals scurried past me and then disappeared through the doorway of a shop on a corner ahead of me. As I drew alongside this shop I discovered it was a shop selling meringues.

The Meringues of the Marais, a district of Paris

Before entering the Aux Merveilleux de Fred I paused to watch the bakers through the window. They were spreading buttercream on cake-sized meringues before covering them in flakes of chocolates and then placing them in the window to tempt passers- by. And I was tempted. When I stepped inside I enjoyed a rush of warmth as well as the delicious aroma of freshly baked brioches – another speciality. The finished cakes have wonderful names such as Le Merveilleux, L’Incroyable and L’Impensable. These are a reference to the period following the French Revolution when young people known as les incroyables and les merveilleux dressed extravagantly and practised odd mannerisms. This shop, and several others, was set up by Frederic Vaucamps who became entranced by the Merveilleux cakes. He began making them commercially in 1982 but failed to capture the market until 1985 when he changed the recipe to make a lighter cake in several different flavours. This melt-in-the-mouth creation is irresistible and I bought one of the smaller cakes which, safely packed in its little cardboard box, I stowed carefully in my bag to enjoy later with a coffee. My next stop was the magnificent Church of Saint Gervais and Saint Protais. 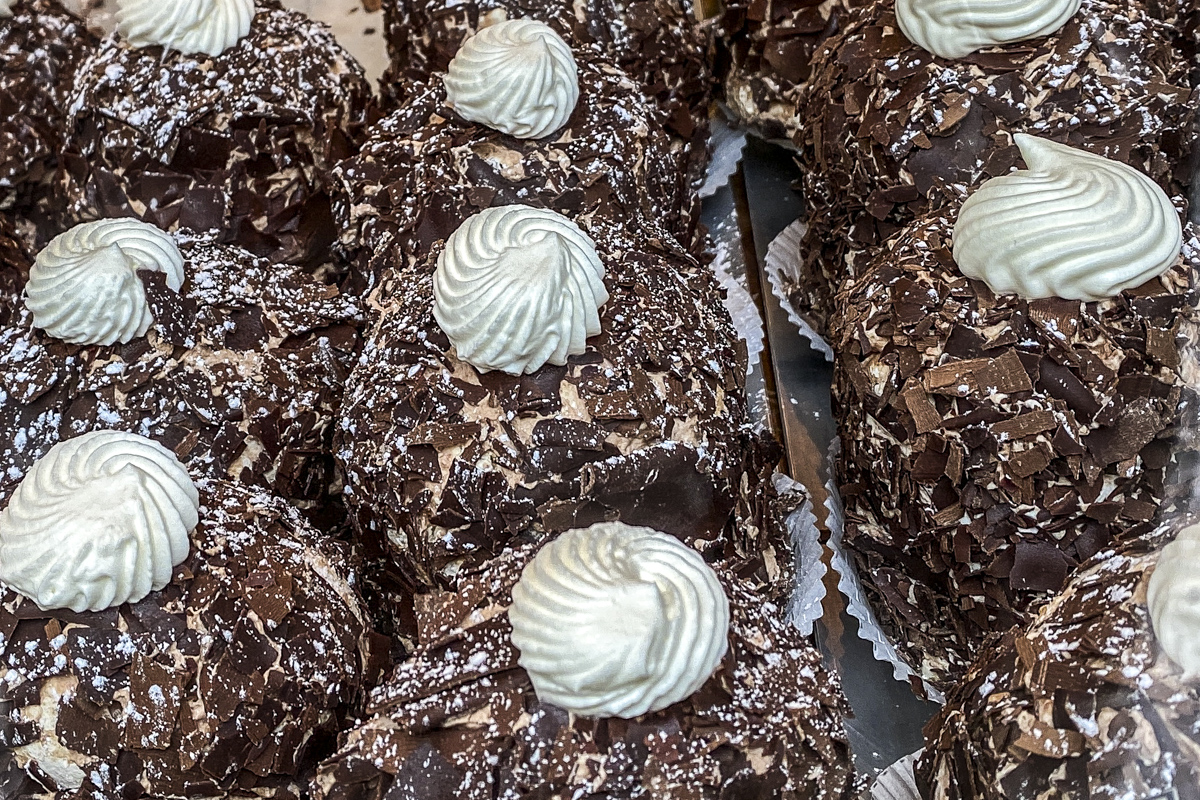 Church of Saint Gervais and Saint Protais in the Marais, a district of Paris

As I pushed open the door of the Church of Saint Gervais and Saint Protais the enchanting strains of polyphonic singing drifted towards me. I was spellbound and routed to the spot. I could see the singers clothed in white beyond the pillars that march down the knave of this amazing fifteenth century building. It was built on the remains of a fourth century basilica. This building was damaged during the First World War and has been restored several times since then and although mainly Gothic in appearance its façade is in the style of French classicism. During the 1970s this church became a centre for the Jerusalem Fraternities who hold their monastic services here. When I finally left the church my attention was engaged by an immense and elaborate building on the far side of the square, the Hôtel de Ville or town hall of Paris. 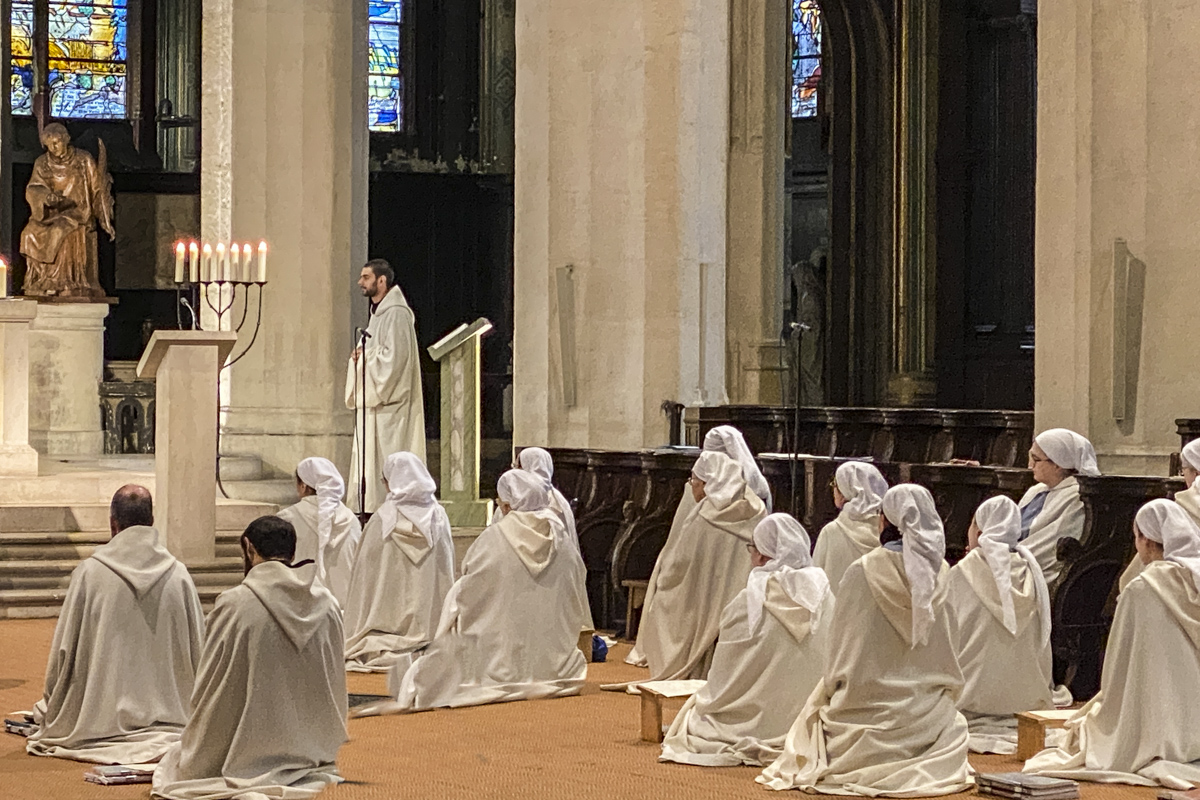 The Hôtel de Ville in the Marais, a district of Paris

The Hôtel de Ville de Paris or town hall has been the home of the Paris City Council since 1357. Today it occupies a huge, neo-renaissance style building that replaced the original Hôtel de Ville which was burnt down during the Paris Commune a citizen’s revolt in 1871. The style of this building is neo-renaissance It is possible to visit the town hall and guided tours are available on reservation. Large exhibitions are also organised here and entrance is free. Continuing my exploration of Marais, I passed through the Village of Saint Paul, a series of linked courtyards featuring unusual shops and secluded restaurants and into the garden of another hôtel particulier, the Hôtel du Sully. 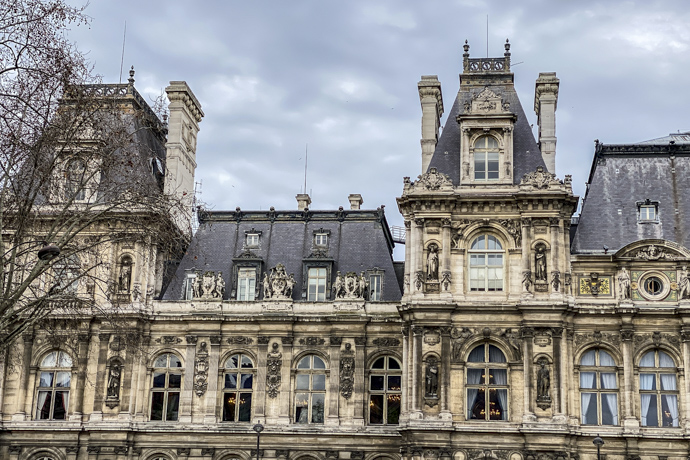 The Hôtel du Sully in the Marais, a district of Paris

Hôtel du Sully also known as Hotel de Bethune-Sully is one of the most beautiful private mansions in Paris. It was built by King Henry IV of France in 1625 to house minister, Maximilien de Béthune, Duke of Sully This duke bought the property in 1634 and it stayed in his family until the mid-eighteenth century. In 1967 it became the headquarters of the Centre des Monuments Nationaux. The main building is not open to the public but there is an information centre and bookshop that are open to everyone. This garden, which was originally planted a formal “embroidery” effect, gives access to the Place des Vosges during opening hours. 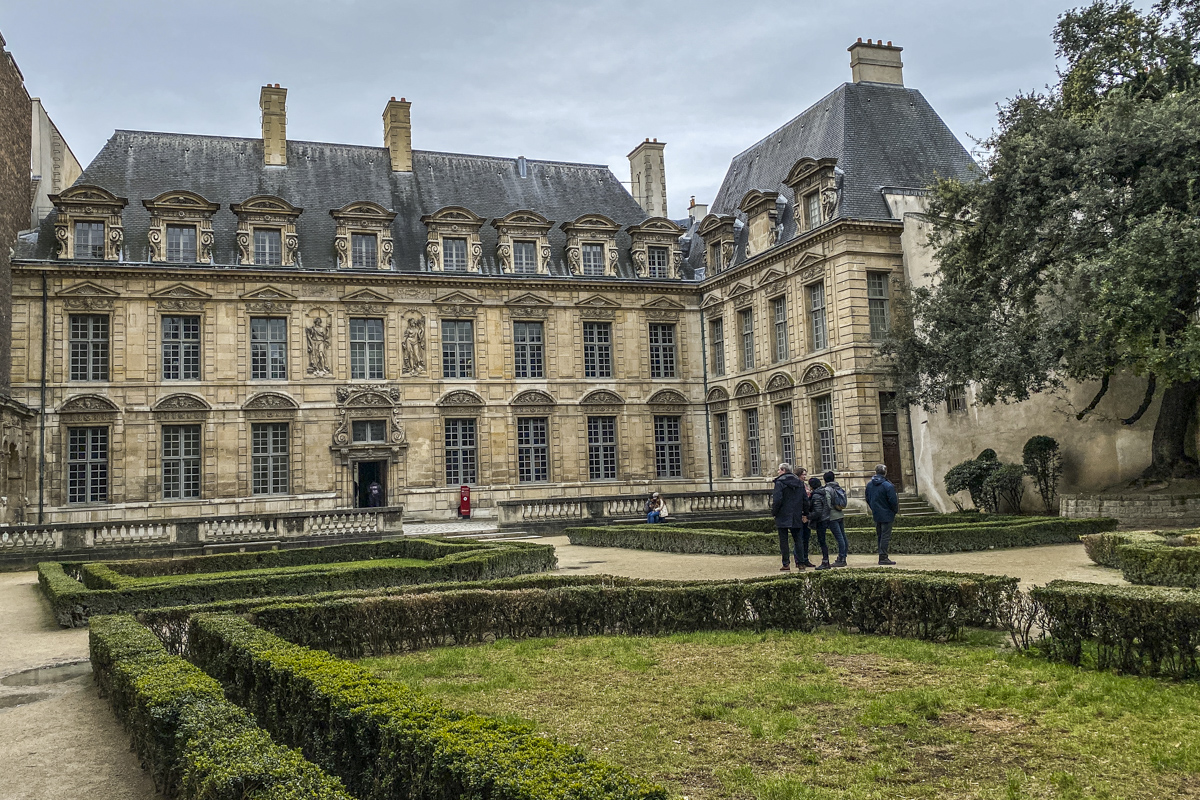 Place des Vosges in the Marais, a district of Paris

The Place des Vosges is the oldest planned square in Paris and was originally known as Place Royale. Built by Henry IV of France is soon became one of the most exclusive residential areas in Paris. The elegant brickwork, arcaded buildings that surround a square were built of a special coloured stone and residents are obliged to retain that colour. Victor Hugo lived here while he wrote Les Misérables, the longest novel on record. His private home is now a museum, Maison de Victor Hugo. By then the aristocracy had abandoned the neighbourhood and the area was taken over by shopkeepers, immigrants, vagrants, artisans, artists and an expanding Jewish community. Today its fortunes have revived and its arcades are lined with up-market, independent shops filled with original works of art and restaurants. The history of this area is detailed in the Carnavalet Museum (free entrance) nearby. 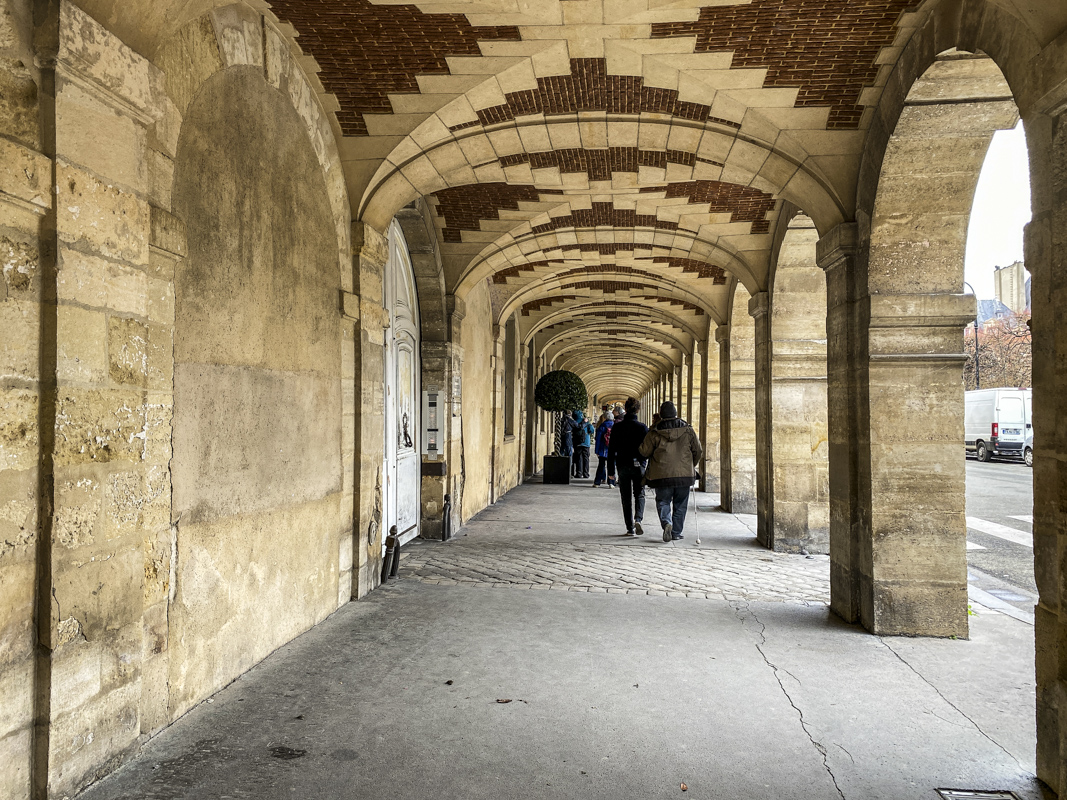 In the centre of Place des Vosges is a formal public garden Square Louis XIII. It is planted with more than a hundred linden and horse chestnut trees surrounding four fountains. In the centre is an equestrian statue of Louis XIII. The king is dressed as a Roman Emperor and his horse, too heavy to stand alone, is supported on a tree trunk – a source of amusement for Parisians today. 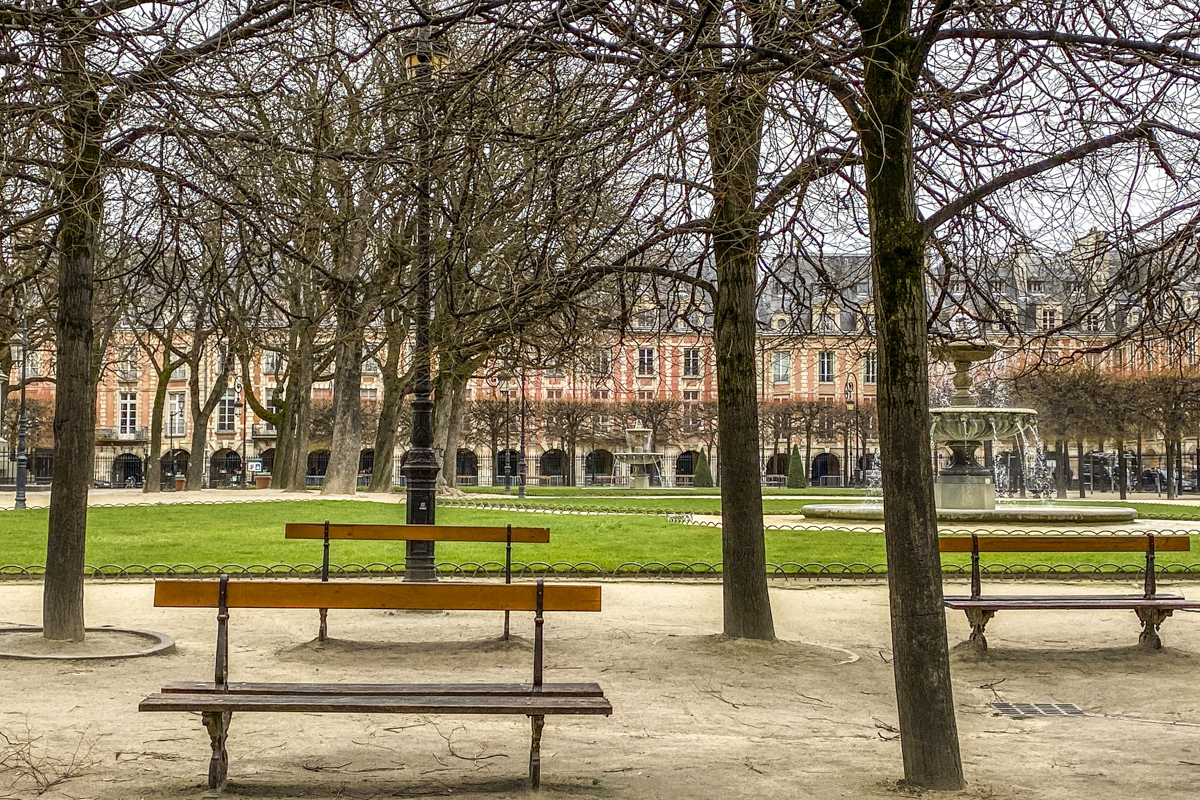 I lingered here to enjoy a lovely lunch at Café Hugo in one of the arcades of the Place des Vosges. By the time I left the streets of Marais were buzzing with locals enjoying an afternoon stroll or a falafel from the famous L’As du Fallafel popular with everyone not just the Jewish community that has settled here. 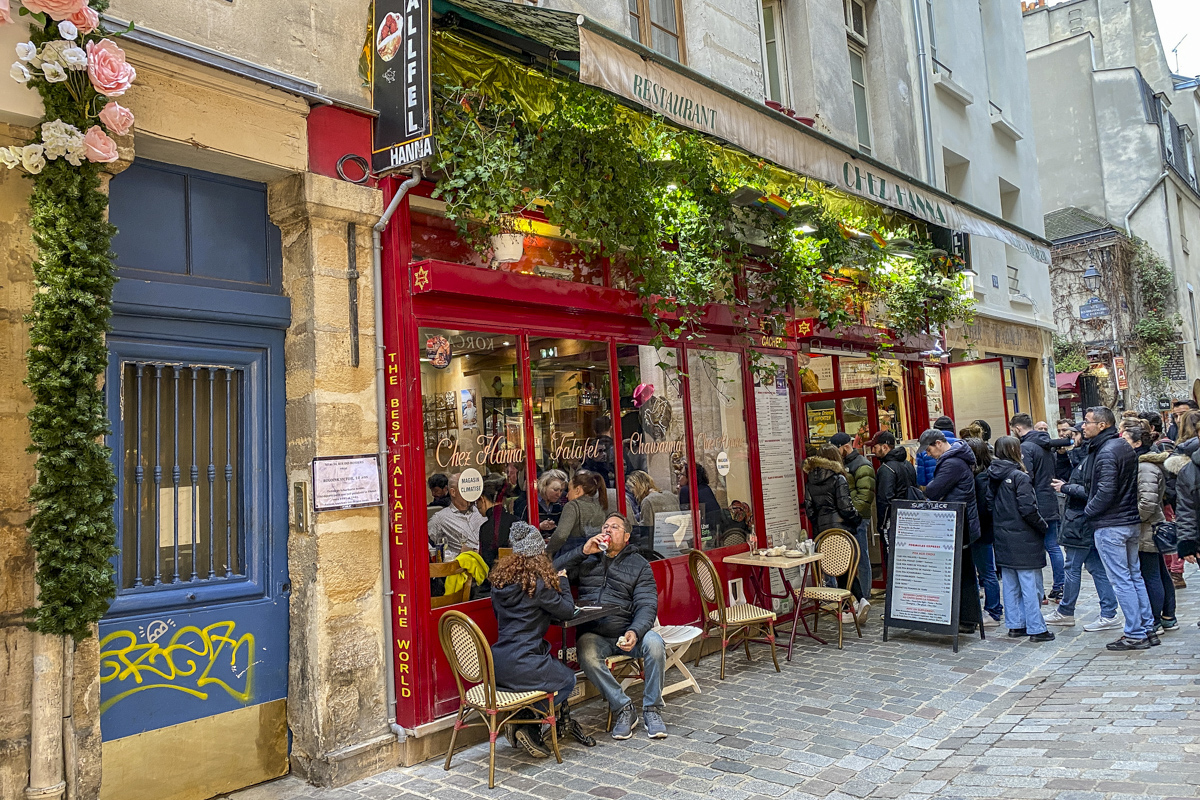 My Sunday morning visit was just a taster of the rich tapestry of history and museums in the Marais – I would be back, one day.

Getting to Paris, France

I visited the Marais in Paris on a holiday with a group of visually impaired travellers and sighted travellers organised by TravelEyes. We travelled to Paris on the Eurostar https://www.eurostar.com/uk-en/ from St Pancras, London. I stayed at the Ibis Gare du Nord which had comfortable rooms, a great breakfast and very convenient for travelling around the city.