Exploring Abervagenny Beneath the Brecon Beacons

On arrival in Abervagenny I was tempted to head for the hills, namely the Brecon Beacons, that surround it but decided to explore the town first starting at the ruined castle, a silhouette on the mound above me as I made my way along the High Street.

The historic market town of Abergavenny in Monmouthshire, is ideally situated in the Brecon Beacons National Park. Established in 1957, it was the tenth National Park to be established in the UK as part of a campaign to rebuild a nations devastated two World Wars. The town itself was established around its castle. 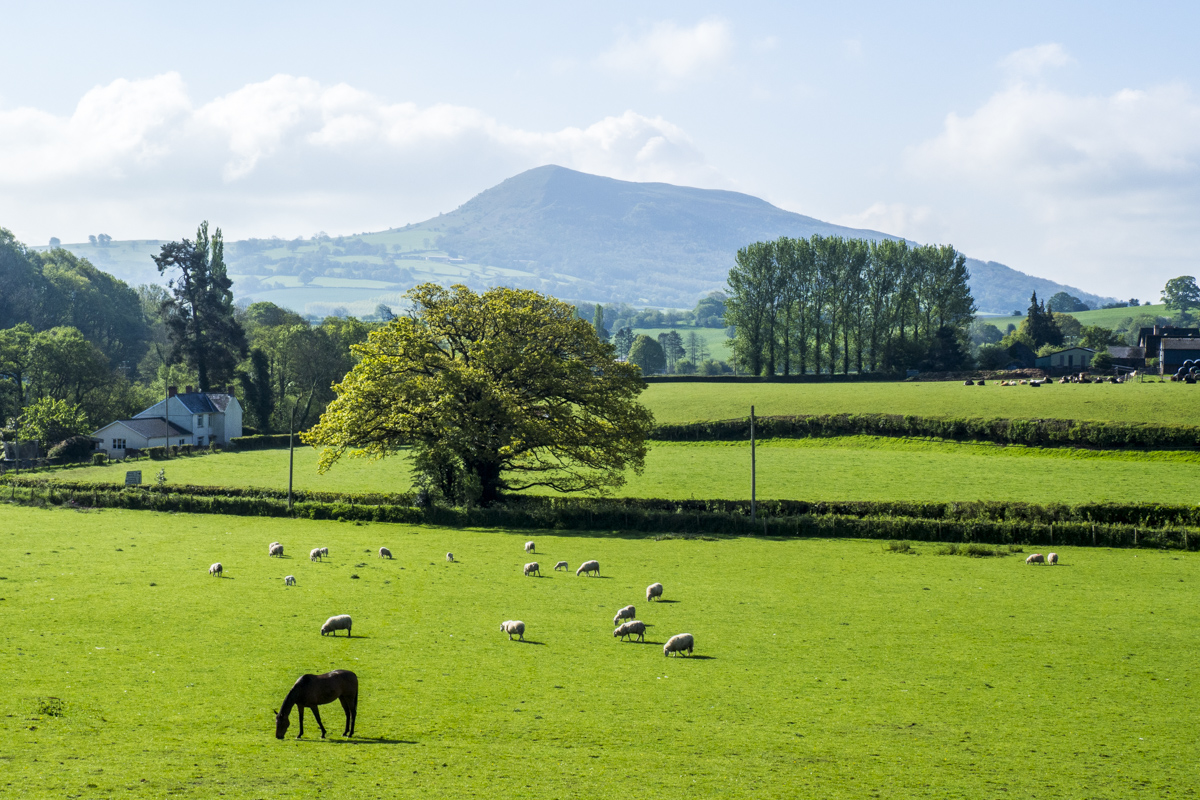 The Castle and Museum in Abergavenny, Wales

Although it is now in ruins it is still possible to see why Abergavenny Castle is one of the best examples of a motte and bailey castle in Britain. It was established by a Norman lord around 1087. During medieval times it was pivotal in the struggles between English barons and Welsh princes. It has many tales to tell of this dark period. In 1089 a Norman lord invited twenty Welsh chieftains to a Christmas dinner here and then executed them all during the meal. It is still possible to make out the two defensive towers, storage cellars, encircling walls, the gatehouse and the small stone windows on the first floor. Comprehensive information boards are a great help in visualising the castle in its heyday. The original motte on the artificial mound would have been constructed from timber. It was replaced by a nineteenth century hunting lodge built by the Marquess of Abergavenny which now houses a museum. 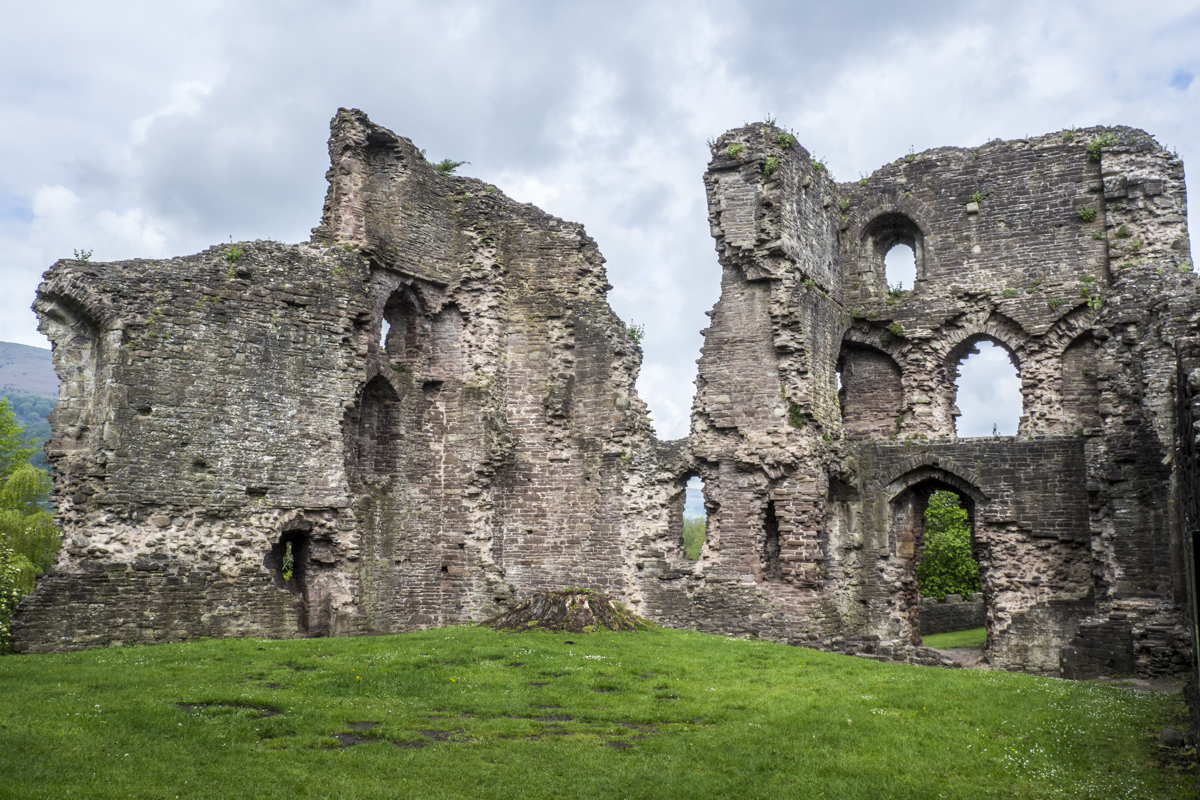 Set in the lovely grounds of the castle Abergavenny Museum is well worth a visit. Different displays on several levels relate the story of Abergavenny from prehistoric days to the present times. The museum has permanent exhibitions and a programme of changing exhibitions. Always on display in the basement are a World War II Air Raid Shelter, The Saddlers Shop, The Welsh Kitchen and Basil Jones’ Grocery Shop. When I finally left the museum I could have taken the path to the Castle Meadows for a walk alongside the River Usk but instead I chose to walk back down Castle Hill into the town centre to visit St Mary’s Priory. 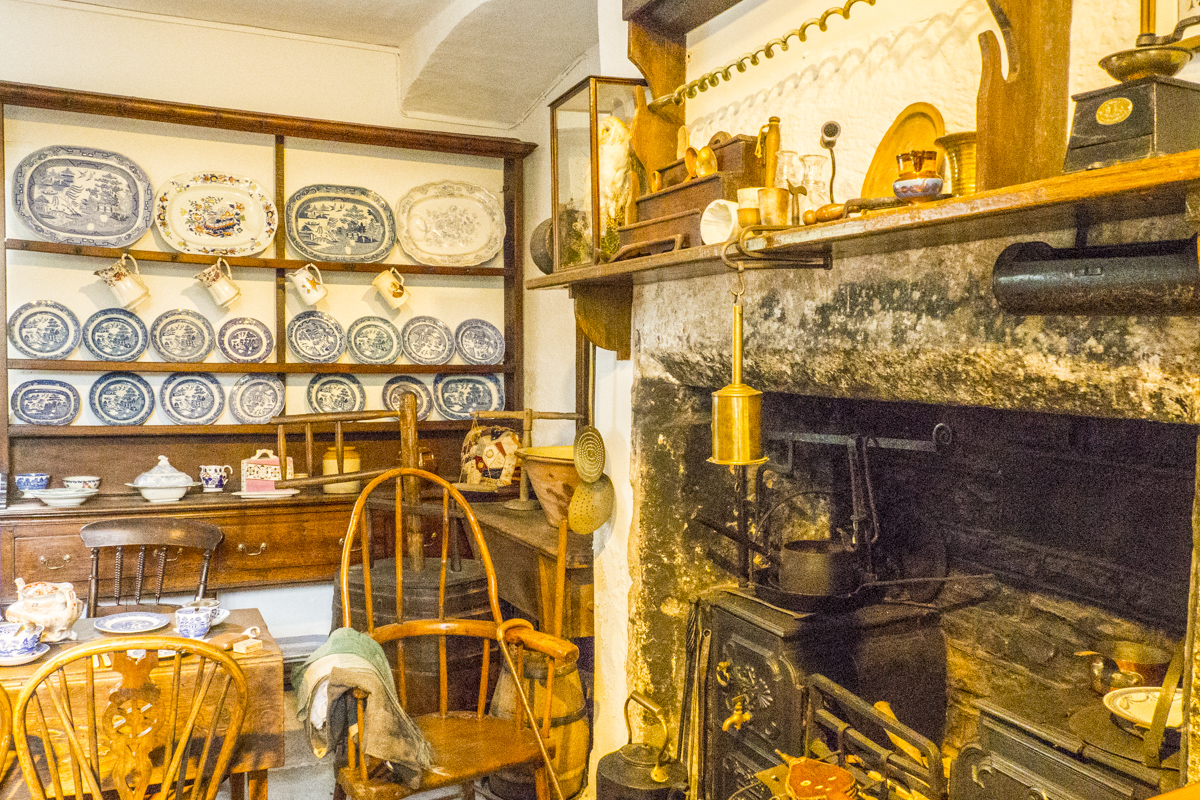 St Mary’s Priory Church amongst the most impressive parish churches in Wales. It’s daughter church, Christchurch, is on North Street. St Mary’s was built around 1100 as part of a Benedictine Priory established in Abergavenny. Gothic in style and built mostly of red sandstone its most prominent exterior feature is the integral tower. 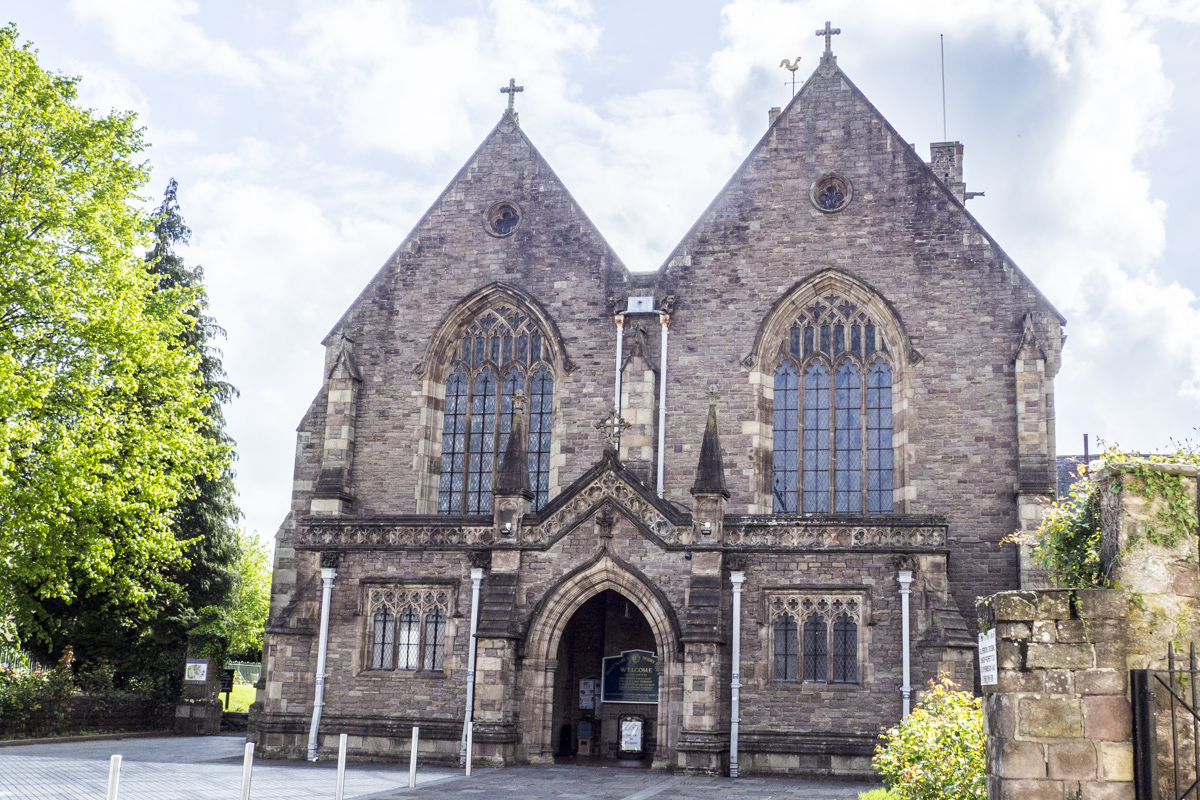 Inside the church is a unique fifteenth century wooden sculpture representing King David’s father, “Jesse”: https://www.britannica.com/biography/Jesse, an important figure in the lineage of Jesus Christ. After St Mary’s Priory was dissolved in 1542 the site was sold and many of the buildings associated with the priory were converted for private use. These included its tithe barn. 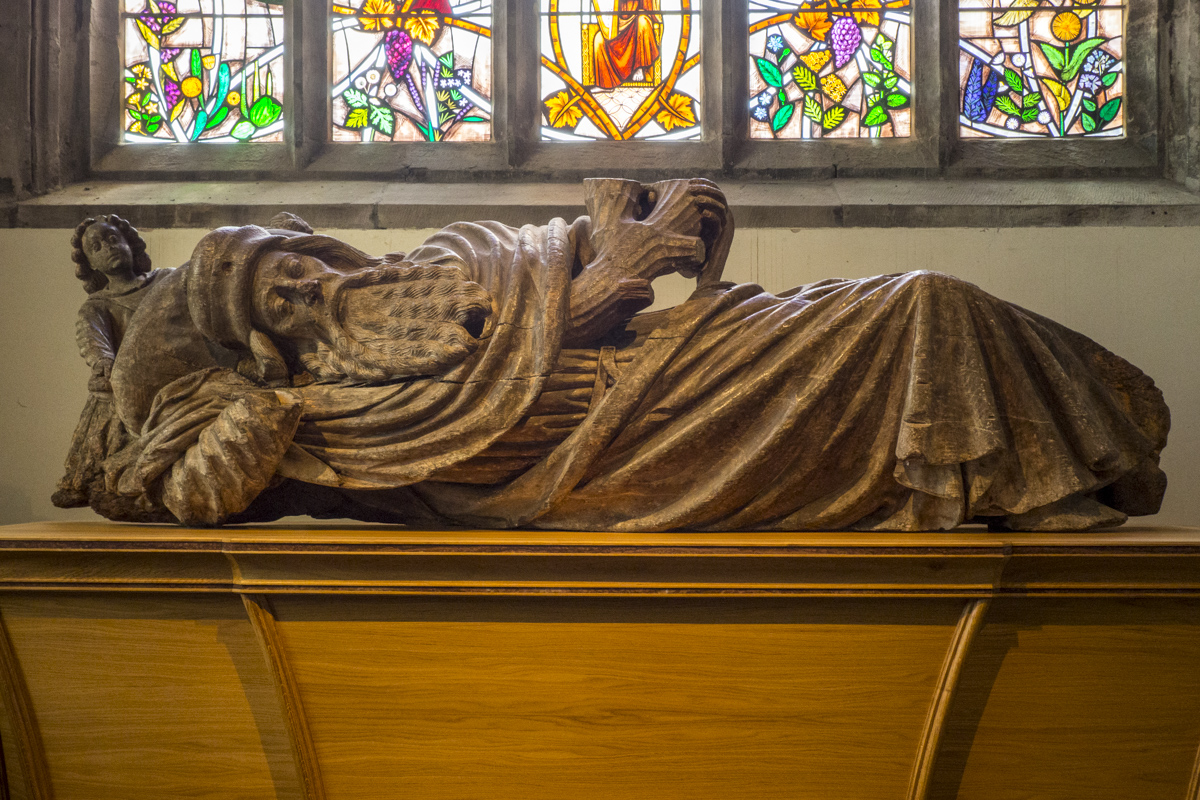 The Tithe Barn in Abergavenny, Wales

The Tithe Barn was built during the twelfth century to store the tithes or taxes paid to the monks of the priory by the people who lived on the land owned by the priory. A tithe could be one tenth of annual produce or earnings, hence a place to store the produce was necessary. Following the dissolution of the priory the barn was used for many different purposes. At first it wa used as a coach house for the manor house that was built on the site where the Priory had once stood. Around 1645 it became a theatre for itinerant actors. When this theatre closed in 1820 it’s more mundane uses included a timber warehouse, a grain store and an auction house. During the 1960’s a local businessman bought the barn and converted it into a discotheque – the first in Abergavenny. When the church acquired the barn at the beginning of the twenty-first century it required a lot of work to stabilise the building. Today it is a visitor centre featuring a comprehensive history of Abergavenny and home to the unique Abergavenny Tapestry. 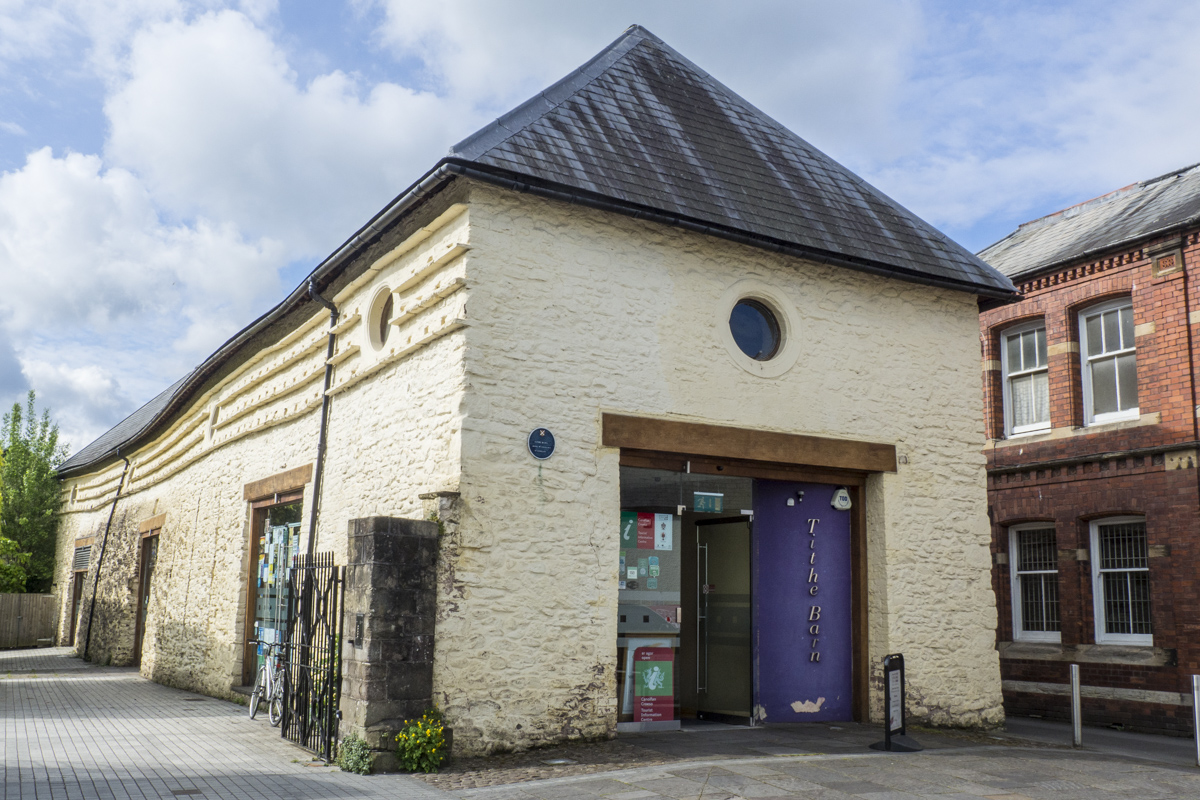 The Abergavenny Tapestry is the work of over sixty local volunteers. It celebrates the new millennium and took nearly four years to complete. Incorporated in the design are some significant events celebrating one thousand years of the history of Abergavenny. These include the Welsh rebellion against the English when the latter sacked Abergavenny in 1404. As I was leaving the Tithe Barn I noticed a garden at the side of the church and went to investigate. 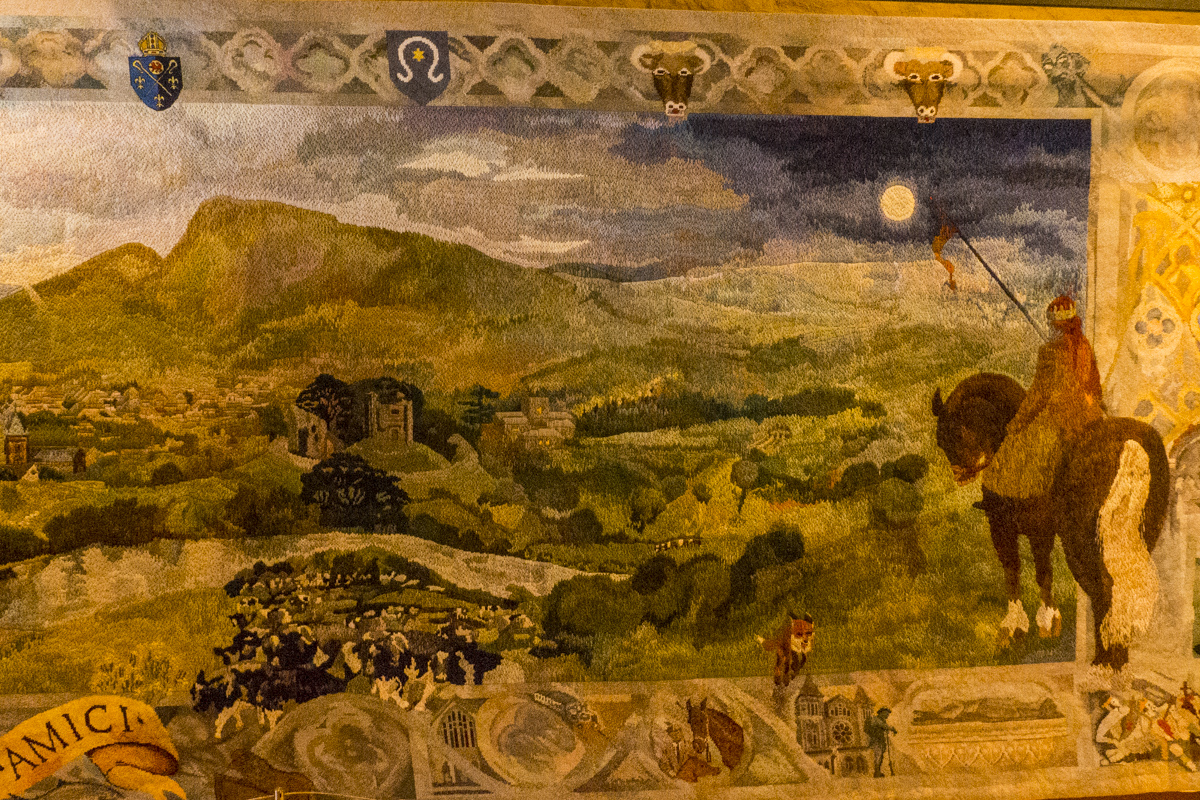 In 2008, after the Tithe Barn had been restored the Abbot’s Garden was re-established. Essentially a herb garden it is divided into three areas representing the herbs that were used during Tudor times – medicinal, culinary and domestic. When the garden was part of the Priory the resident monks would have tended the herbs and the novices would have been taught how to use the herbs. Other areas of this garden include a Magnificat Garden planted with the blue and white flowers associated with Saint Mary. On the far side of an arch of Rambling Rector roses there is raised French parterre style flower bed. It is the perfect place for peaceful reflection. But, all too soon, it was time for me to move and investigate another area of Abergavenny’s history, its market. 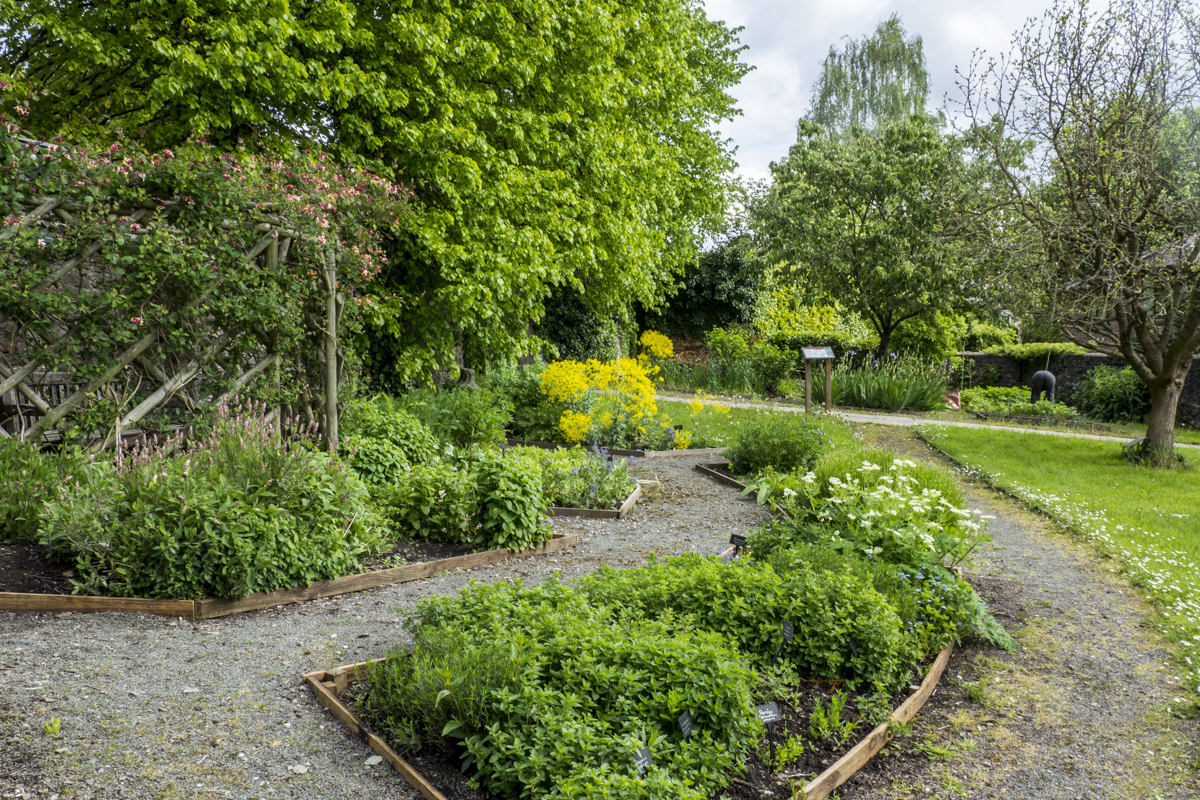 The Market and Town Hall in Abergavenny, Wales

As the town expanded around its castle it also developed as the market centre for the surrounding area. Initially it was controlled by the Norman Lord of Abergavenny and it was a good source of income for him. These early markets were held in or around the church but had probably moved to a permanent site by the fourteenth century. There is no doubt that regular markets were held during the medieval period but there are no records until 1638 when Charles I granted a charter to Abergavenny and the responsibility for the markets passed to the inhabitants of the town. Since then various markets, including livestock markets, have been held in different places including different buildings constructed for the purpose. A permanent home was found for an indoor market when the present Town Hall was built incorporating a market hall at the back. A general market is held here every Tuesday, Friday and Saturday and other markets include a Flea Market, a Craft Fair, an Antique Fair and an Artisan Market. The front of the imposing Town Hall is on Cross Street, the main commercial street in the town. 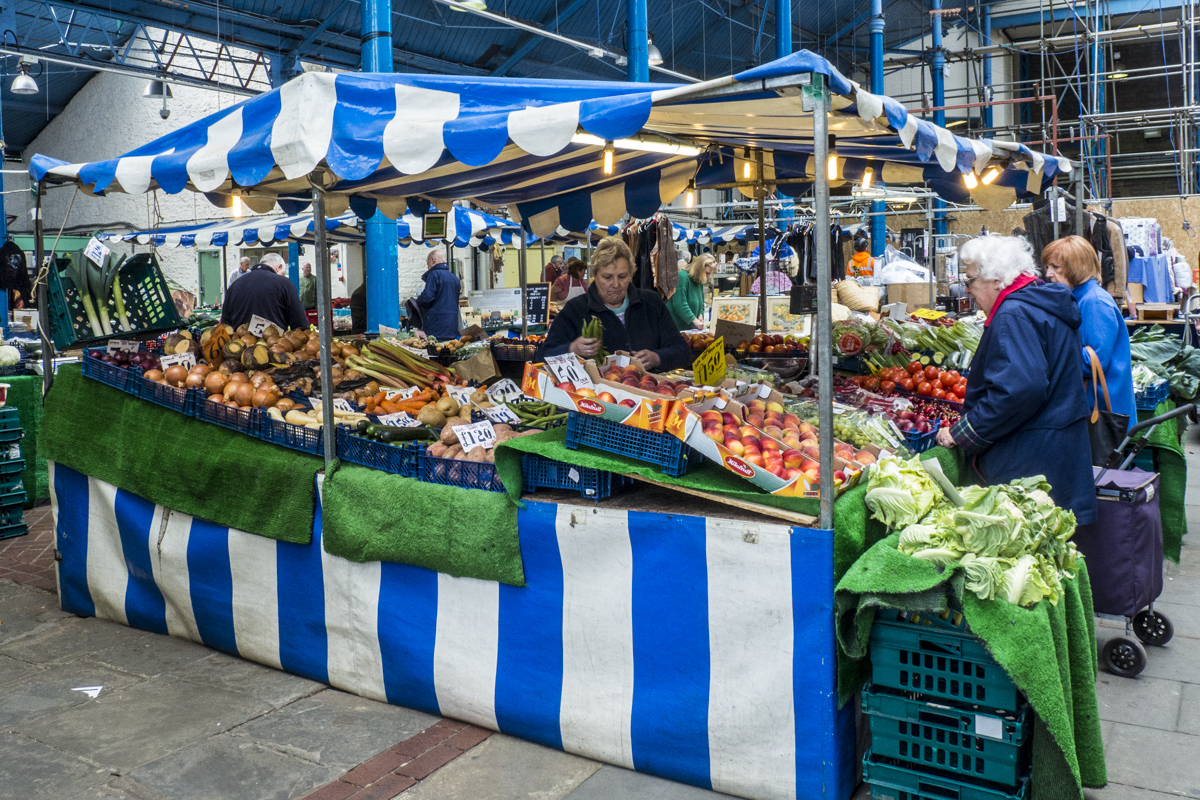 Little has changed externally since the present Town Hall was completed in 1871. It was built in the style of rural Early French Gothic with some Italian flourishes. Internally the assembly room was fitted out as a theatre and still functions as the Borough Theatre. It is the largest building in Abergavenny with an arcade of five Gothic arches encompassing the ground and the first floors. One arch contains the main entrance to the market hall. The left hand arch, under the tower, is the entrance to the main stairway leading to the council chamber and the Municipal Theatre. At the far end of the town is a large open space known as Bailey Park. 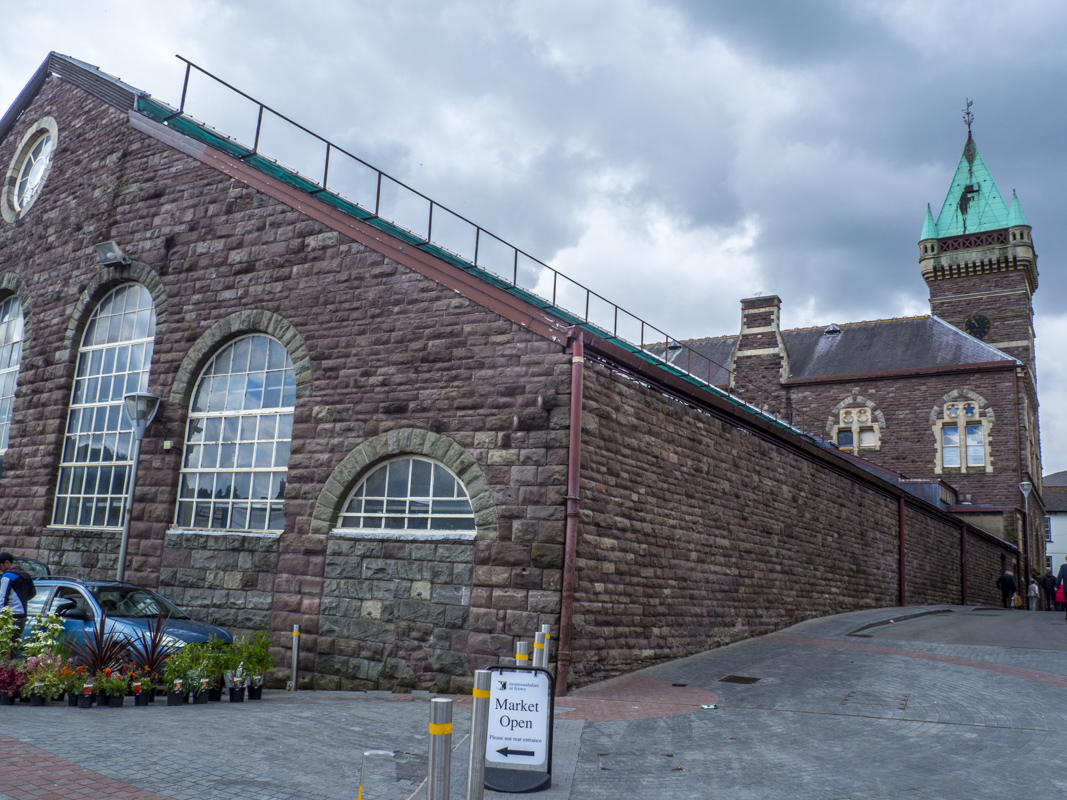 A grandiose entrance to Bailey Park reflects the fact that this park was once in private ownership. Double wrought iron gates stand between two imposing stone pillars. It was during this period, in 1884, that the park was laid out. It was open to the public and used as a venue for public events. It became the responsibility of the local authority at the end of the nineteenth century. This large grassy area incorporates playing fields, a bowling green and a bandstand. Tree-lined paths encircle this area. For those who prefer beds of flowers to stroll amongst the lovely Linda Vista Gardens will fit the bill nicely. 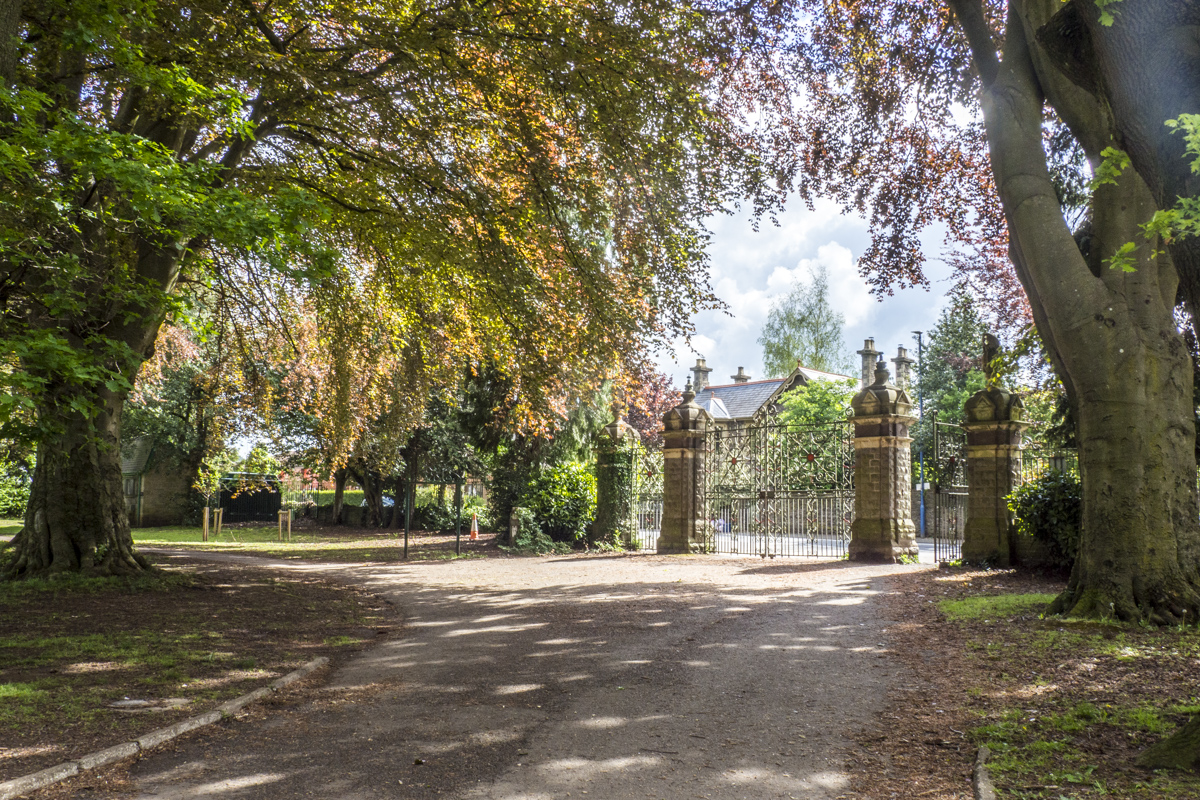 The Linda Vista Gardens were also originally in private ownership. As a result, the formal part of this urban public park exhibits a sophisticated pattern embracing unusual trees and plants. Before the council bought the garden it belonged to the owners of Linda Vista villa. Built in 1875 this three-storey villa still overlooks the garden. Its features include a rockery, a rose garden, a cascade and an interesting wooden sculpture depicting important events in the history of the town. Since the council acquired the garden it has been enlarged and it now incorporates Castle Meadows 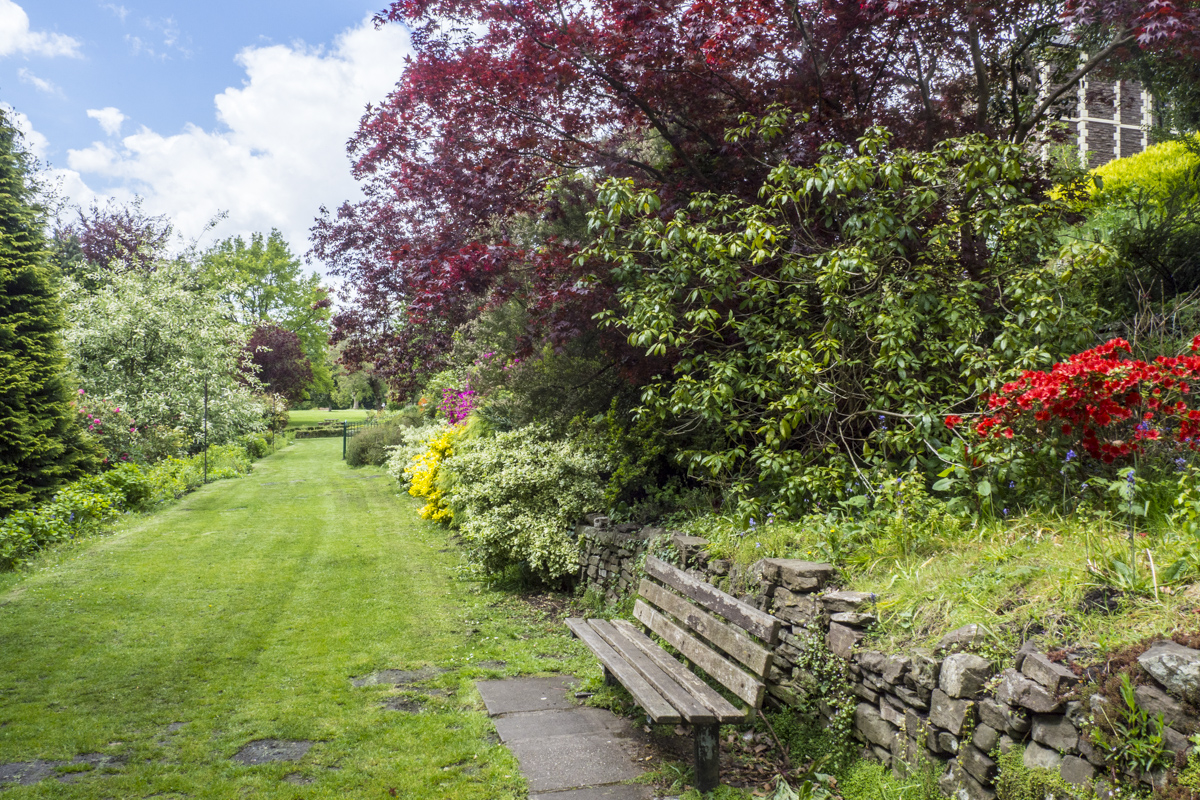 Castle Meadows is a large riverside meadow on the banks of the River Usk. Trees, little copses, ponds and streams enhance this area. Beyond the meadow a landscape entices walkers to explore further afield in the undulating landscape of the Brecon Beacons National Park. 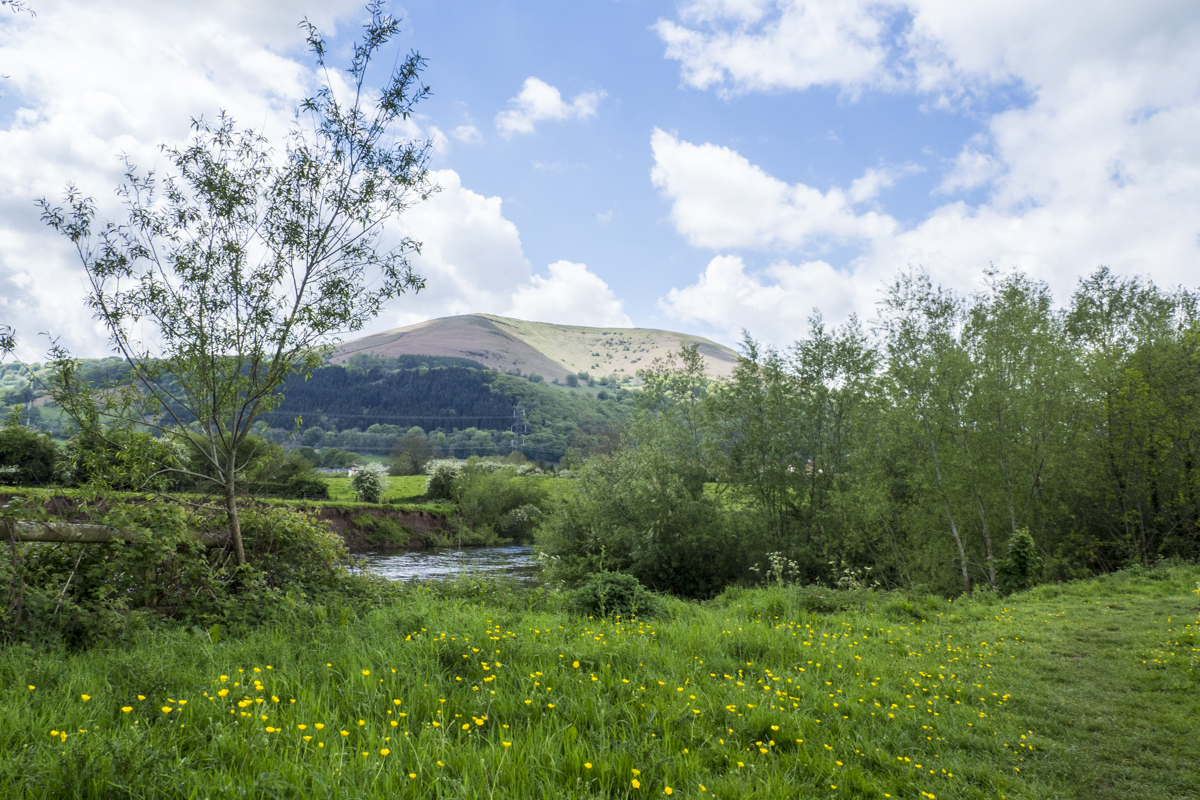 Abergavenny is a great starting point for some “wonderful walks”: http://www.gps-routes.co.uk/routes/home.nsf/place-walks/abergavenny-walks in the Brecon Beacons right on the doorstep. Challenging climbs to the summits of Skirrid, Blorenge and the Sugar Loaf start from the town. The scenery is breath-taking with great panoramic views across the Brecon Beacons and probably just the occasional sheep to share your enjoyment. Not far from Abergavenny is one of the oldest churches in Wales, St. Issui at Partrishow. I was lucky enough to find some excellent accommodation close to this church. 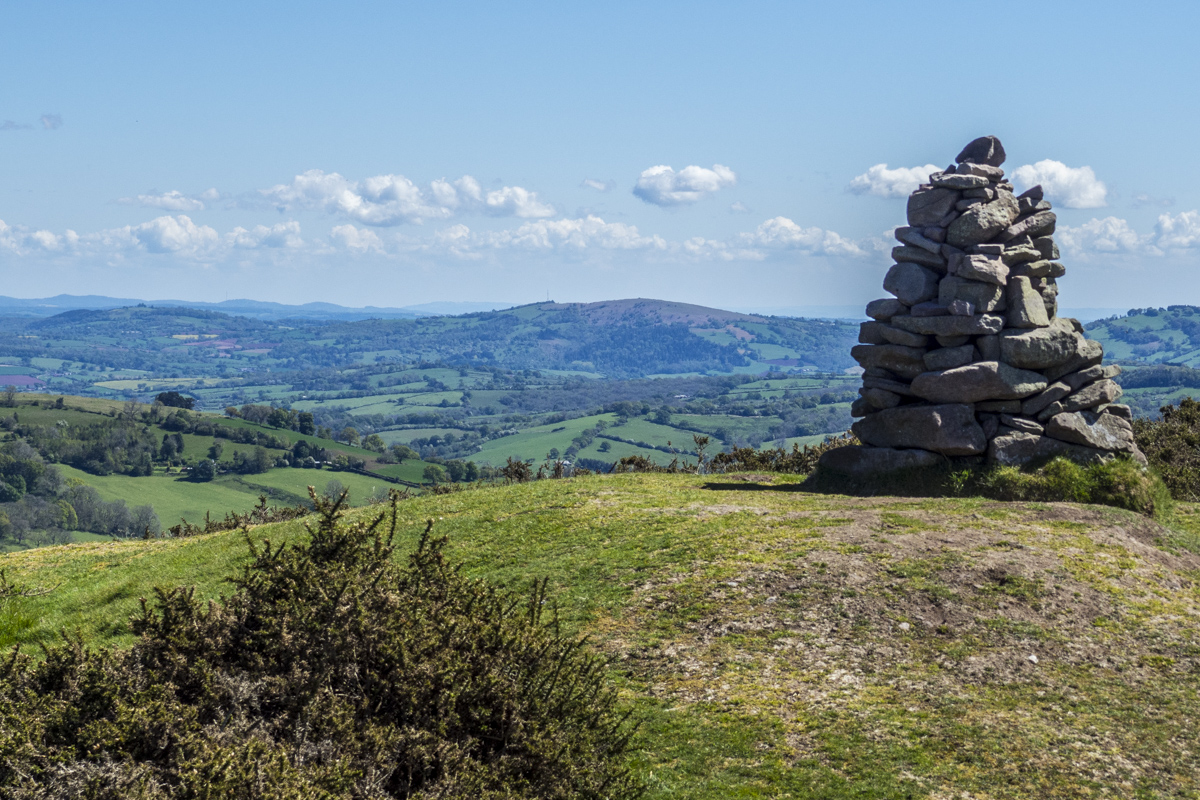 Where to Stay in Abergavenny, Wales

A lovely hideaway not far from Abergavenny is Tyn Y Llwyn. The Old Stable has everything one could want for a self-catering stay in the countryside. It stands in an old farmyard that dates back to the sixteenth century. On arrival I had to open a wooden five-bar gate before driving up the long drive and parking next to my two-storey stable. I was surrounded by pristine countryside criss-crossed by the hedges and fences of an agricultural landscape. I was soon ensconced in the cosy sitting room making plans for a walk the following morning. As the sun turned to a golden glow I decided to walk across the meadow to visit the church of St Issui at Partrishow. 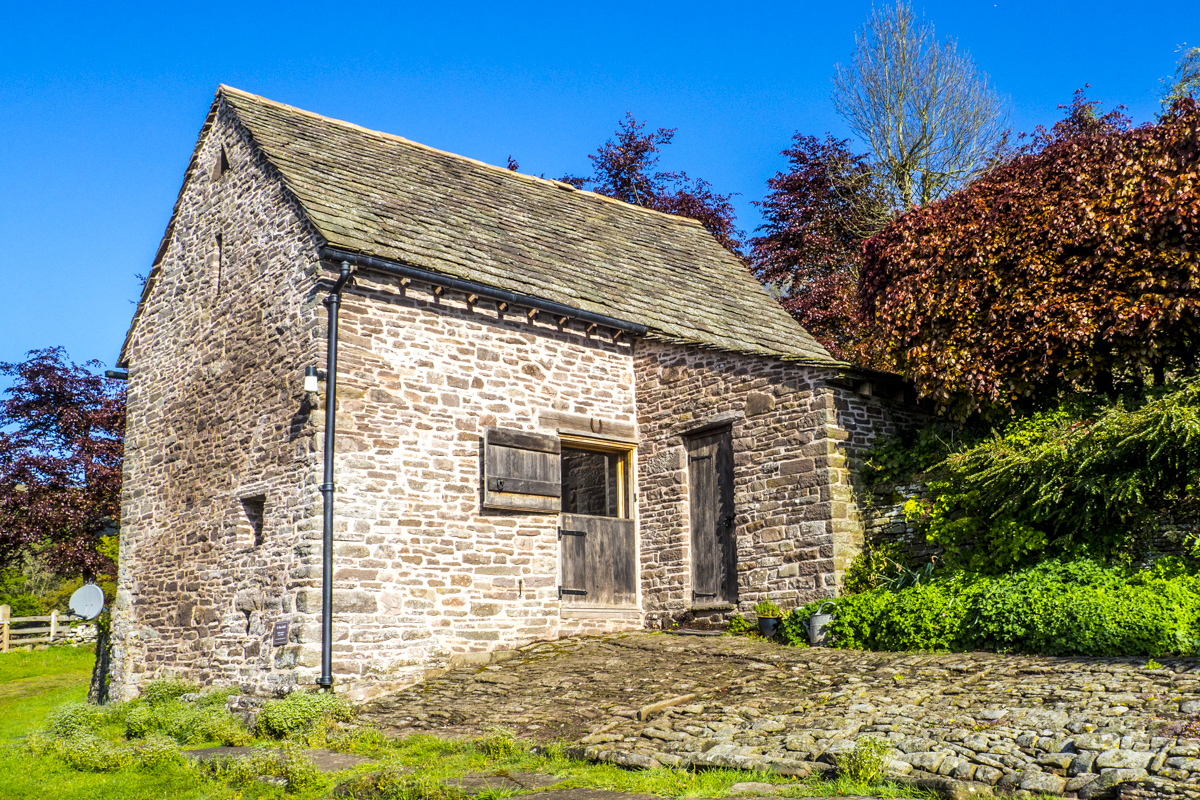 The charming church of St Issui at Partrishow was consecrated during the eleventh century. It was partially rebuilt during the fourteenth and fifteenth centuries. A rood screen was added during the fifteenth century. It’s simple Gothic architecture blends in well with it verdant surroundings. I visited in the spring when the churchyard was carpeted with bluebells. The church is a grade 1 listed building with features of national importance. It is simply delightful. 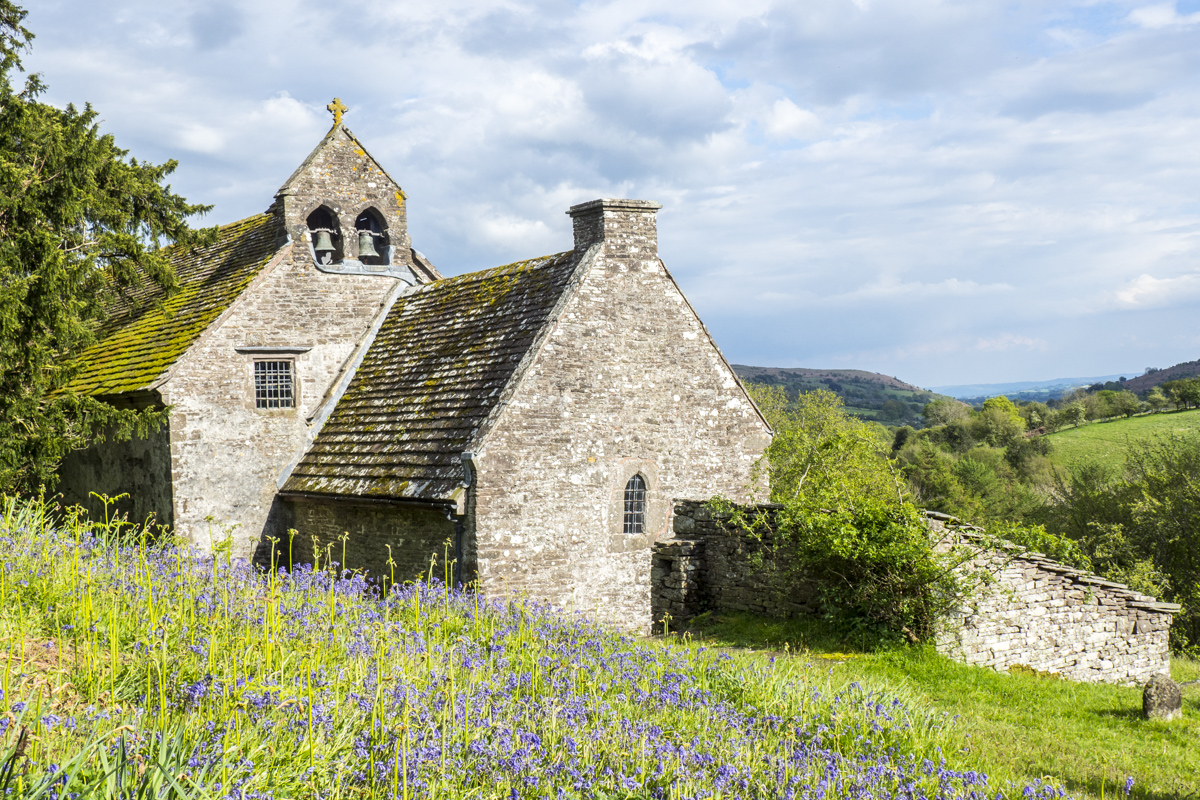 How to Get to Abergavenny, Wales

It is an easy journey by car as it is just off the M4 not long after entering Wales. Abergavenny does have a train station but it is a long way from the town centre.