I have long admired the opulent architecture of the Orthodox Church but had failed to appreciate the symbolism of the domes that dominate its religious buildings until I spent some time in Kiev, famous for its historic places of worship.

The dome as an architectural feature was developed by the Romans as long ago as the fifth century. In most religions buildings it has since been replaced by easier techniques such as vaulting. However, in Kiev the capital of the Ukraine the dome reigns supreme. Despite its fall from grace in other countries it has been a significant feature of Ukrainian Baroque architecture that emerged during the ninth century and lasted until the end of the seventeenth century. An excellent example of Ukrainian Baroque church architecture is the Cathedral of Saint Sophia. 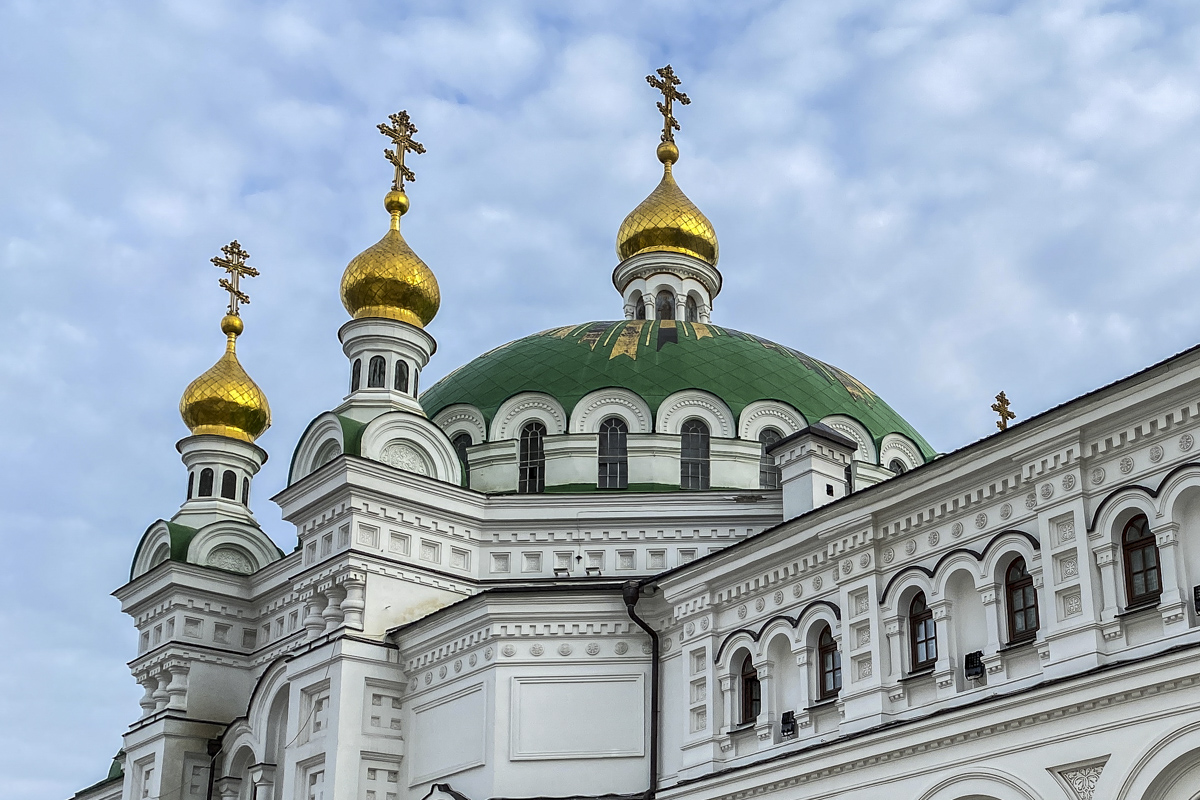 The Cathedral of Saint Sophia in Kiev in the Ukraine

Built during the eleventh century Saint Sophia’s Cathedral became the centre of Christianity in Kiev. Listed by UNESCO on its World Heritage List it is the best preserved ancient Christian church in the Ukraine and beyond. It is dedicated to Sophia the Saint of Wisdom who is identified with the emergence of the new Orthodox Christian religion at the time the cathedral was built. This fabulous building is topped by one large golden dome and six green domes. These domes are pear-shaped, a variety of the more common onion dome that developed in the Ukraine. Colours are symbolic in the Orthodox Church. Gold signifies the light of God and his divine nature. Green represents the Holy Spirit, the natural world and new life. 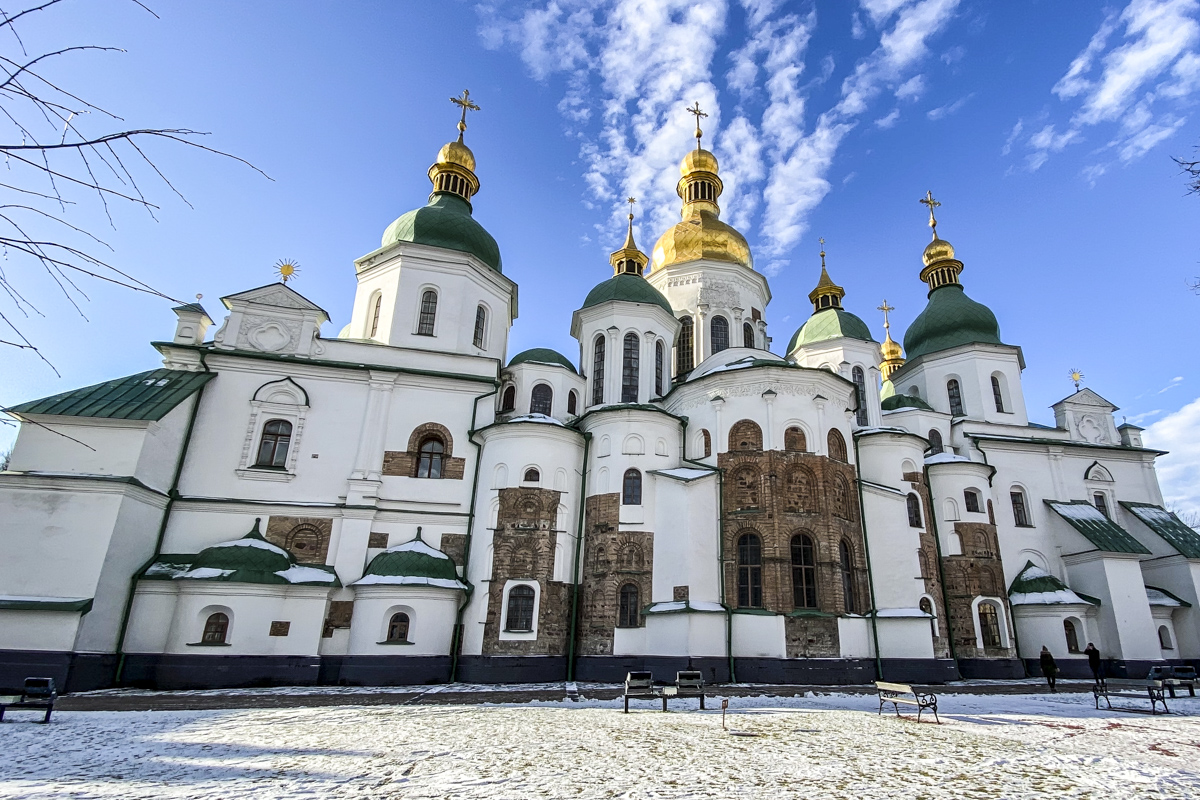 This cathedral is now a museum and visitors can appreciate an interior is decorated with amazing mosaics and beautiful frescoes amid archways and along a mezzanine gallery. An incredible gold iconostasis or screen adorned with icons separates the nave from the sanctuary. The dome is decorated with images of Christ and his Apostles. As domes became associated with the sky and heaven images of religious significance became a common decoration in churches. A second UNESCO site in Kiev is Kyiv Pechersk Lavra also known as the Cave Monastery. 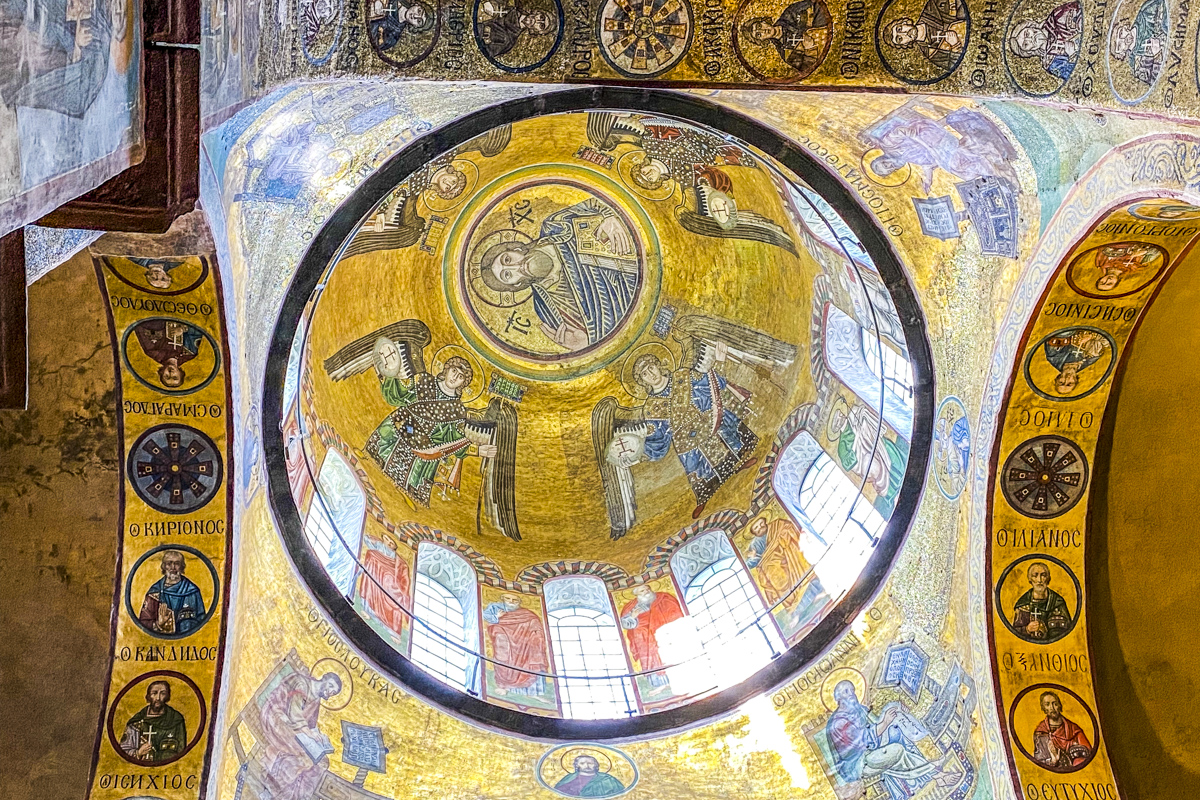 Kyiv Pechersk Lavra in Kiev in the Ukraine

Kyiv Pechersk Lavra is also known as the Kiev monastery of the caves. This extraordinary place was built on top of a warren of narrow underground passages winding their way past caves containing chapels, catacombs and monks’ rooms. As the birth place of orthodox Christianity it is the most sacred monastery in Eastern Europe. There are four entrances but the easiest place to start is the main entrance at the western gate (charges apply). Visitors should remember that appropriate clothing must be worn if visiting the caves or the religious places. The complex has two separate areas. Upper Lavra is a cluster of museums and historical monuments. The centrepiece is the exquisite Dormition Cathedral with numerous golden domes and an elaborate façade. 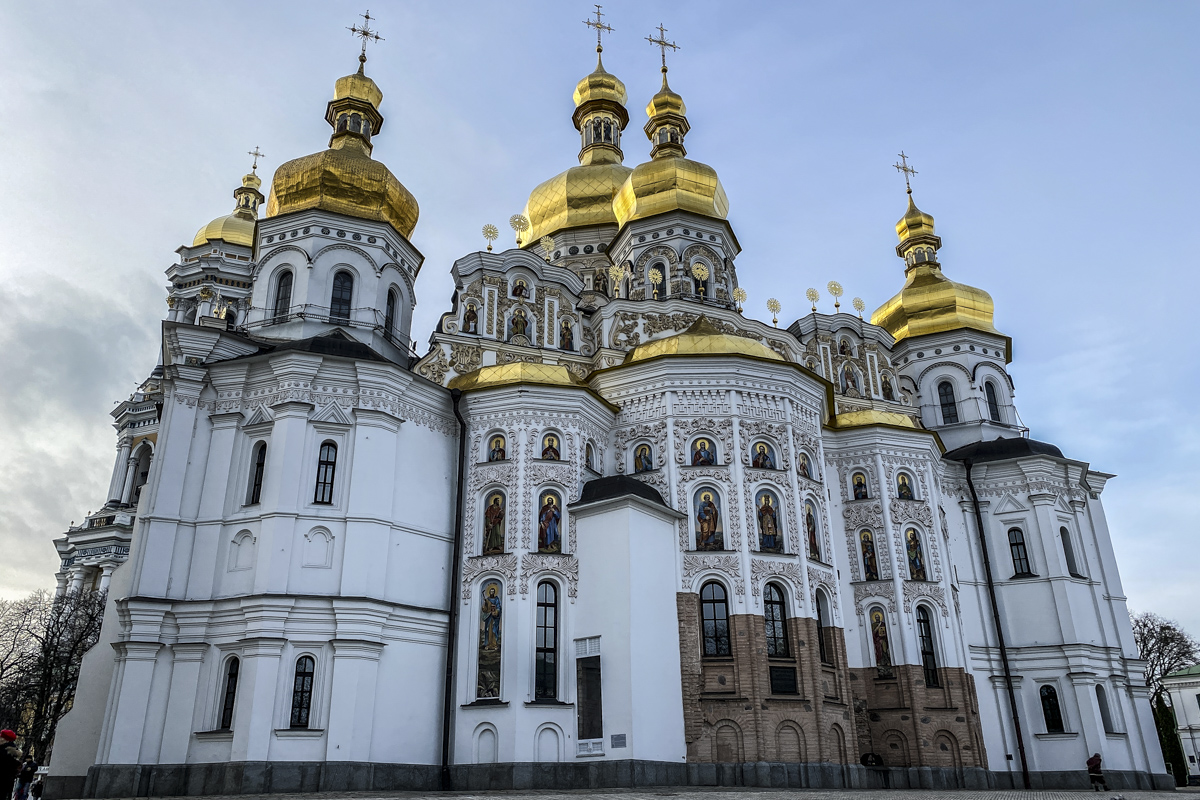 A must-see here is the Refectory Church. This church was built at the end of the nineteenth century. It was designed in Neo-Russian style with a Modernist influence. It is a surprising light and joyful place. Its interior is dominated by an elaborately decorated dome that features Jesus Christ and his Apostles in an intricate design. 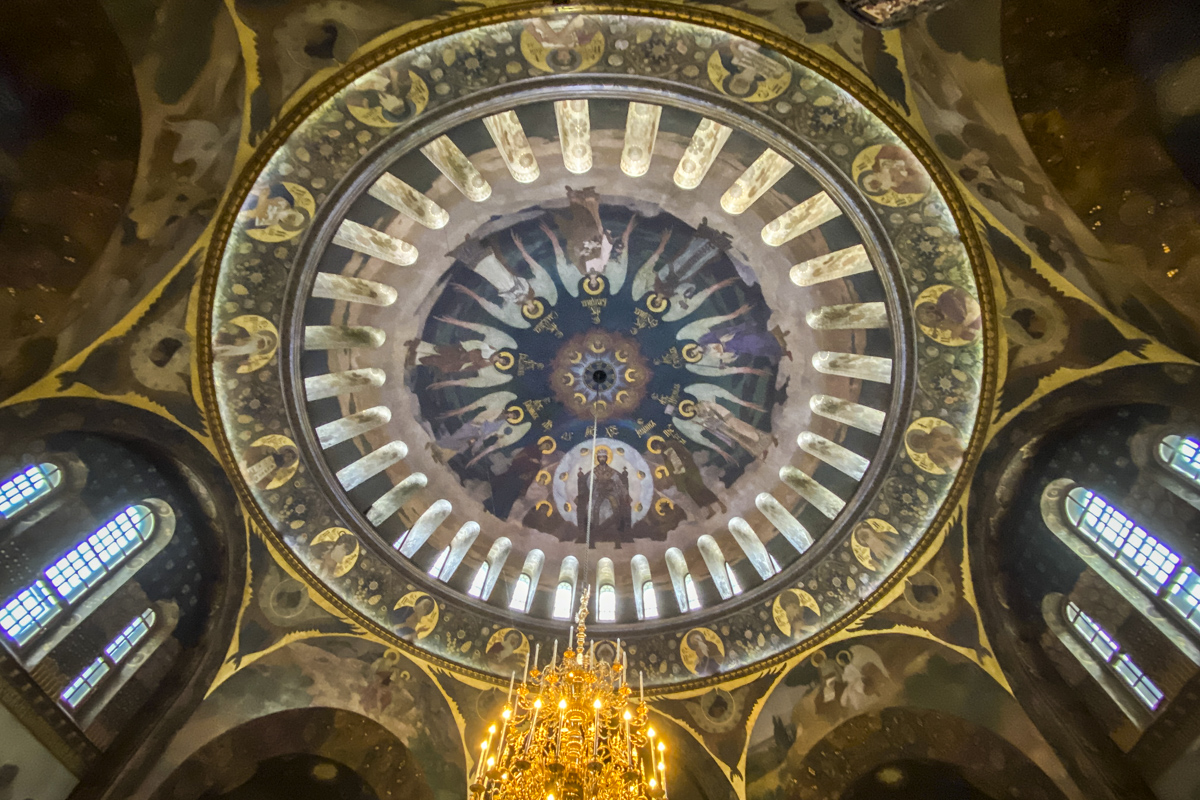 Lower Lavra, a working monastery under the auspices of the Ukrainian Orthodox Church is a complete contrast. Walking between the two visitors can enjoy stunning views of white buildings topped by green domes rolling down to the banks of the Dnipro River below. Before entering the caves visitors must buy a candle to light their way. It is an eerie experience exploring these caves by flickering candlelight. There are two routes, the short way or the long way, before emerging in a large courtyard in the extensive grounds of the complex. Another church with fabulous domes is the Church of Saint Andrew. 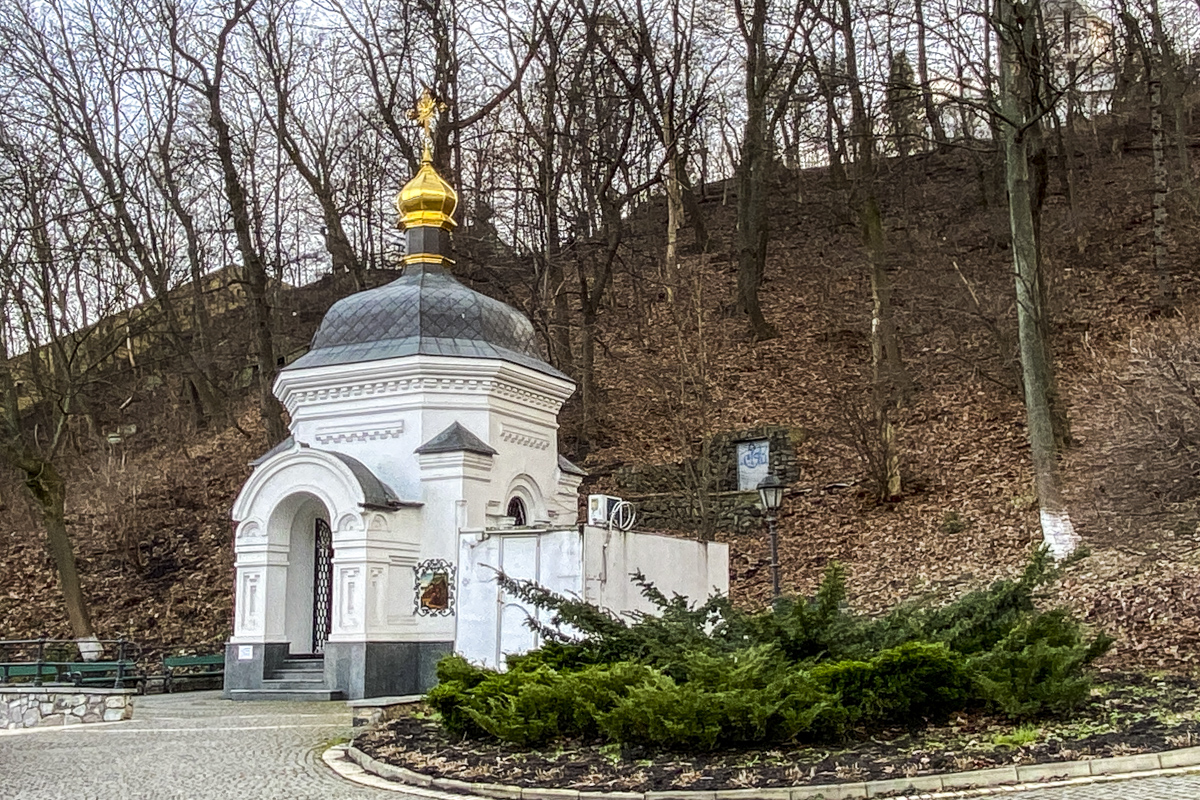 The Church of Saint Andrew in Kiev in the Ukraine

To appreciate the elevated position of the Church of Saint Andrew the best approach is walking up one of the most famous streets in Kiev Andriyivsky Uzviz. This cobbled street is one of the oldest streets in Eastern Europe and is lined with interesting buildings featuring some extravagant street art. Looking down on this street is the majestic church of Saint Andrew. This great example of a baroque church was built by the renowned Italian architect Bartolomeo Rastrelli during the mid-eighteenth century. Its three decorated green domes represent the Holy Trinity. 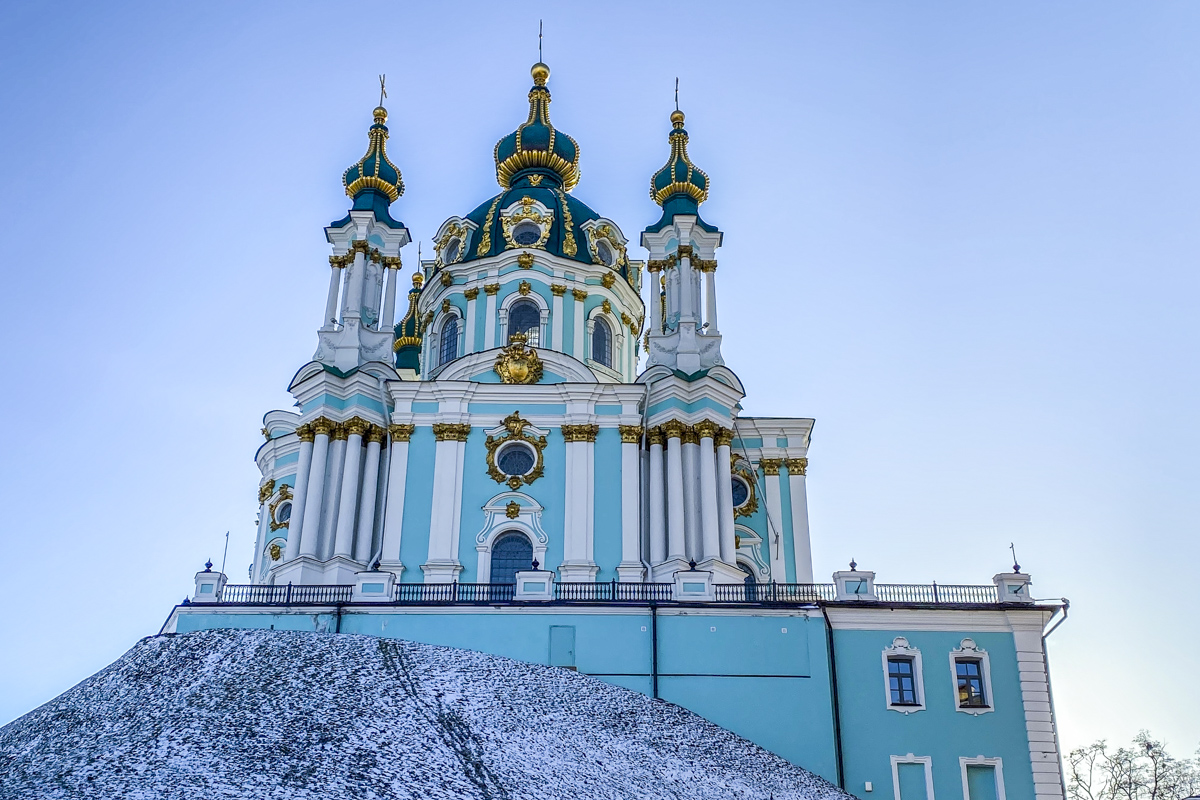 In 1968 this church was turned into a museum. Despite this it is one of the few buildings in Kiev to have survived for such a long time without any modifications or renovation. Take time to stroll around its terrace that overlooks the city below on both banks of the Dnipro River. Unlike the Church of Saint Andrew, the Golden-Domed Cathedral of Saint Michael has been completely re-built following the destruction of the original building. 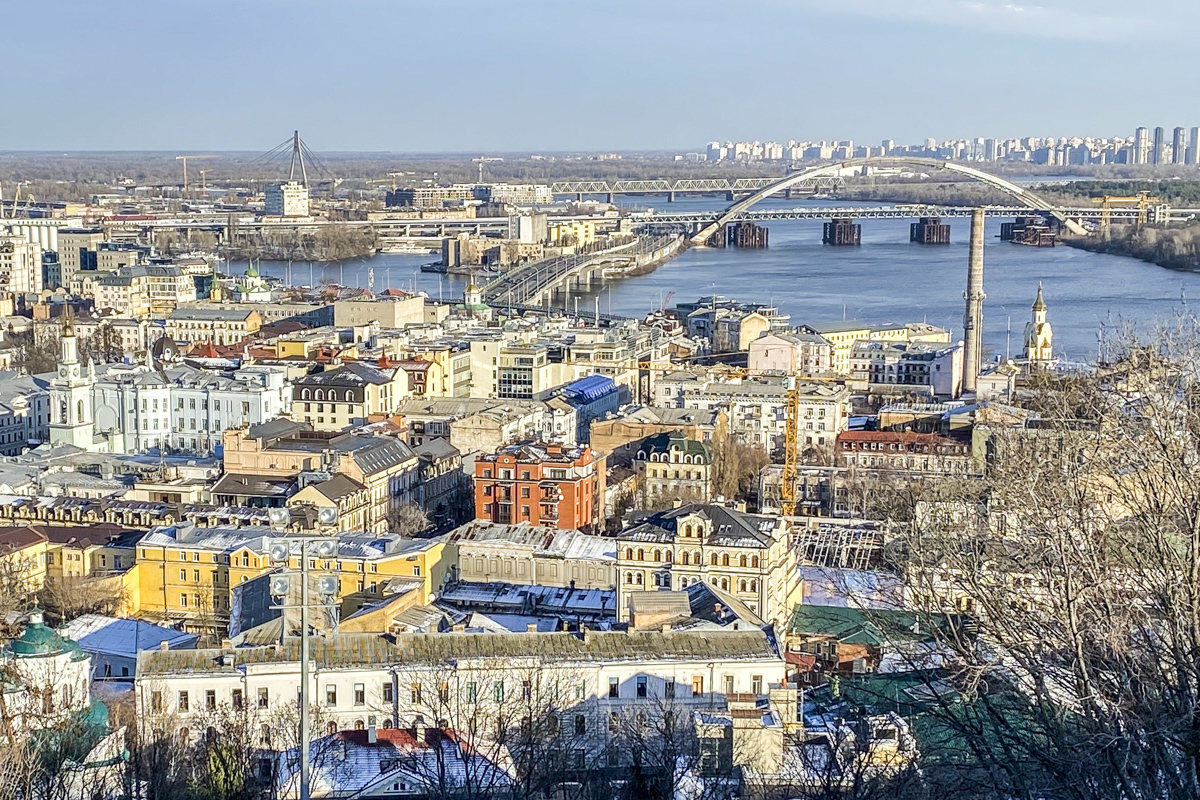 St. Michael’s Golden-Domed Monastery in the centre of Kiev is actually a copy that occupies the site of the original building. Built during the twelfth century the first building was constructed in the Ukrainian Baroque style. The original building was destroyed during the Stalinist campaign against religion in 1936 and it was sixty years before it was re-built. It’s golden-domed cathedral is dedicated to the Archangel Michael the heavenly patron of Kiev. It is therefore of particular importance to the citizens of the city. There is a museum in the bell tower of the monastery that details the history of the building. The seven shiny new domes on the top of the cathedral represent Seven Sacraments. Also important as a place of worship is the less pretentious orthodox church of Saint Michael 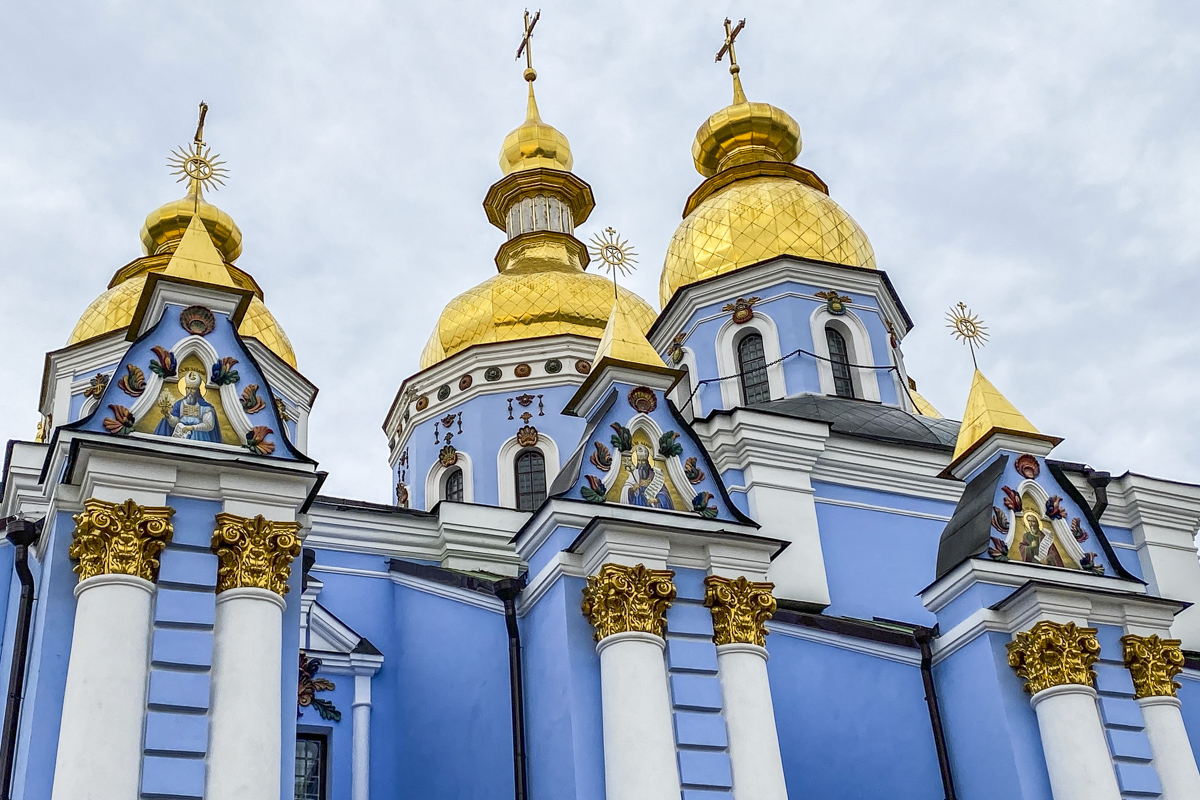 The Church of Saint Michael in Kiev in the Ukraine

I first noticed this church in the golden glow of a late-afternoon sun. The architectural style of this church is Russian Revival with two, black matt domes each topped by a golden cross. The only significance of the colour black would appear to related to the preference of the architect. This church is a replica of the original church built here in the grounds of a large hospital and focusing on helping the sick people in this hospital. This church was also destroyed during religions repression in the 1930s and the replica was built at the beginning of the twenty-first century. This is a very atmospheric, popular, local church and queues form outside for the Sunday service. Kiev is famous for its religions tolerance and happy to celebrate all religious festivals. Its oldest Catholic church is the Cathedral of Saint Alexander. 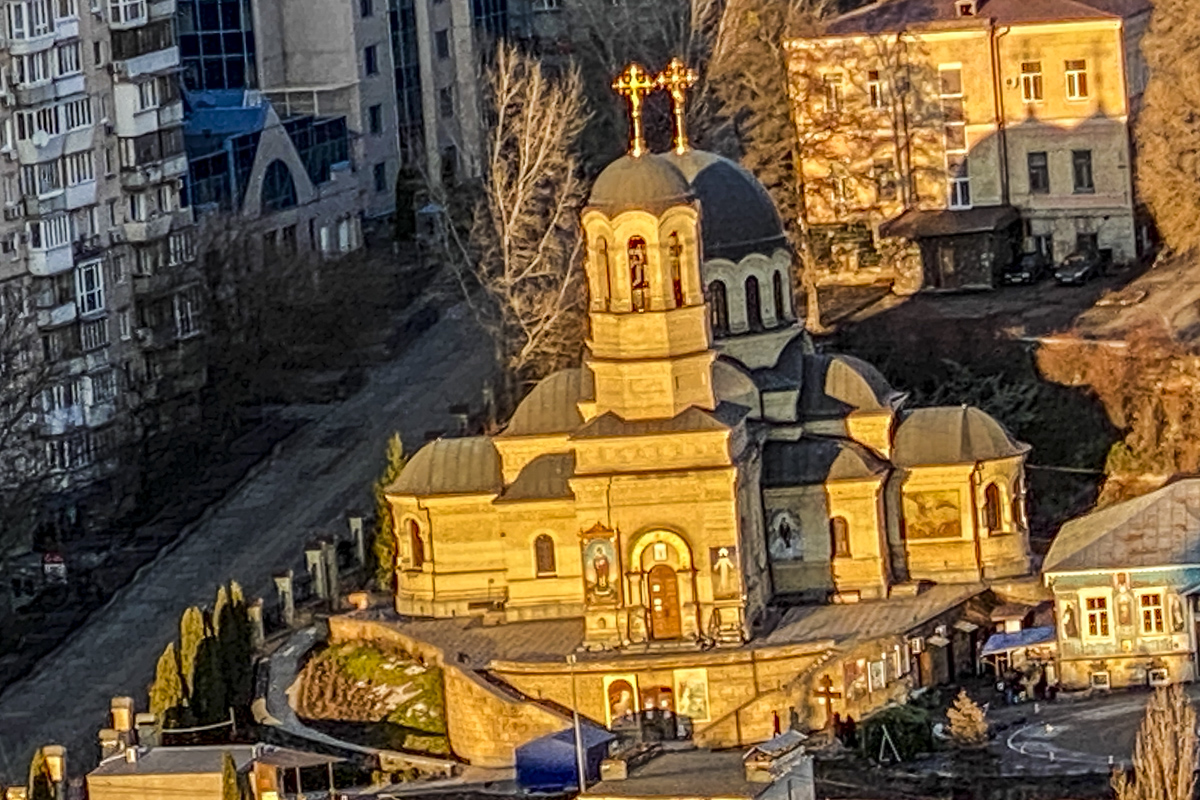 The Cathedral of Saint Alexander in Kiev in the Ukraine

The Cathedral of Saint Alexander also known as the Co-Cathedral of St Alexander, Kiev is the oldest Catholic Church in the city. Permission was granted to build a church for the Catholic population in 1815 and the building was finally completed in 1842. The church was seized by the communist regime in 1937 and returned to the Catholic Church in 1991. This neo-classic building with a colonnaded front forms the shape of a cross. It is also topped with domes one large, black, pumpkin dome and two smaller ones. Masses are held in English here. Old village churches were often built using wood and I found some examples in the National Museum of Ukrainian Architecture and Culture close to the city. 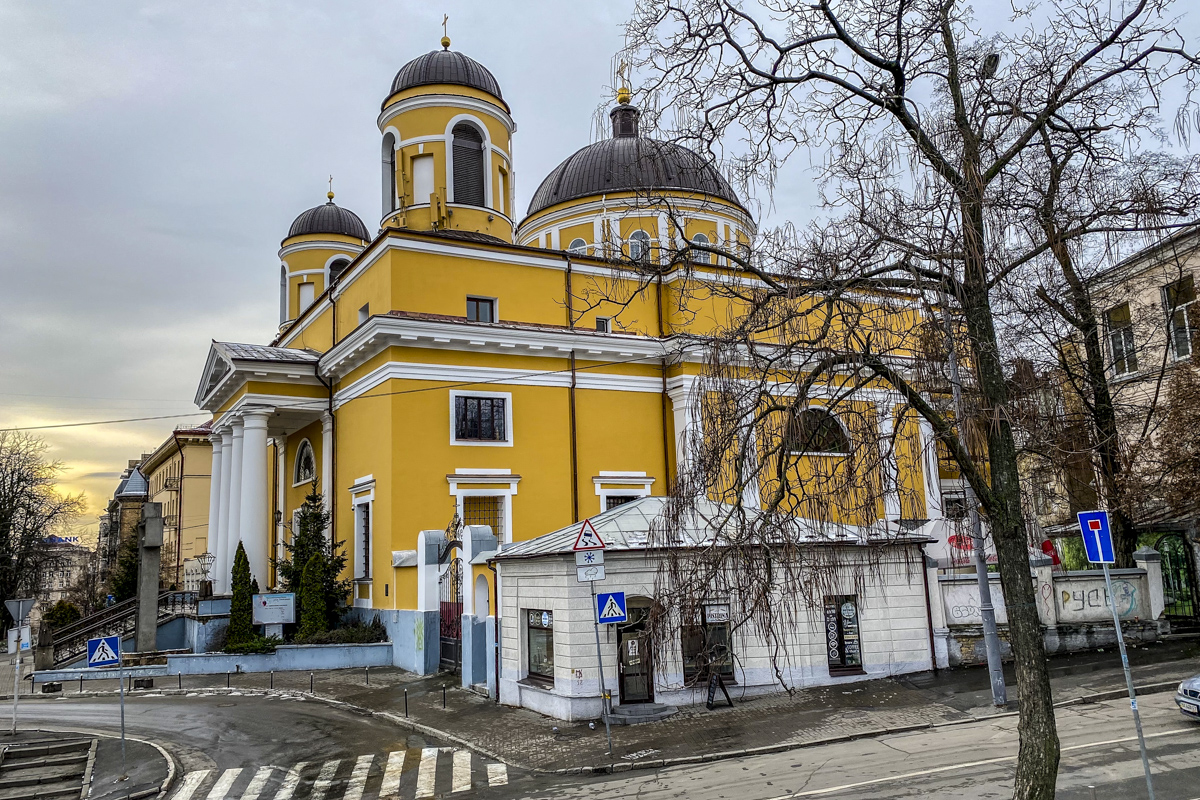 In the National Museum of Ukrainian Architecture and Culture I found some lovely wooden churches topped by very simple, onion domes. This open-air museum in Pirogovo village opened in 1976 and it is the largest museum of its kind in Europe. It features over two hundred structures some original and some replicas of structures from different areas of the Ukraine. Visitors can browse the folk craft shops within the museum and enjoy some traditional Ukrainian cuisine in its restaurant. One of the most interesting exhibits here is the Church of St Paraskeva. Typical of churches built in the early seventeenth century this church is constructed entirely from oak. Originally built in 1742 it was taken down and re-built in 1757 when it began to lean. It was an Orthodox church until it closed when the Bolsheviks https://isj.org.uk/ukraine-and-the-bolsheviks/ came to power in 1917. It was moved to the museum in the early 1970s and partially restored. It was completely restored in 1993 after the Ukraine gained its independence and, following its re-consecration, it functions as a church again. 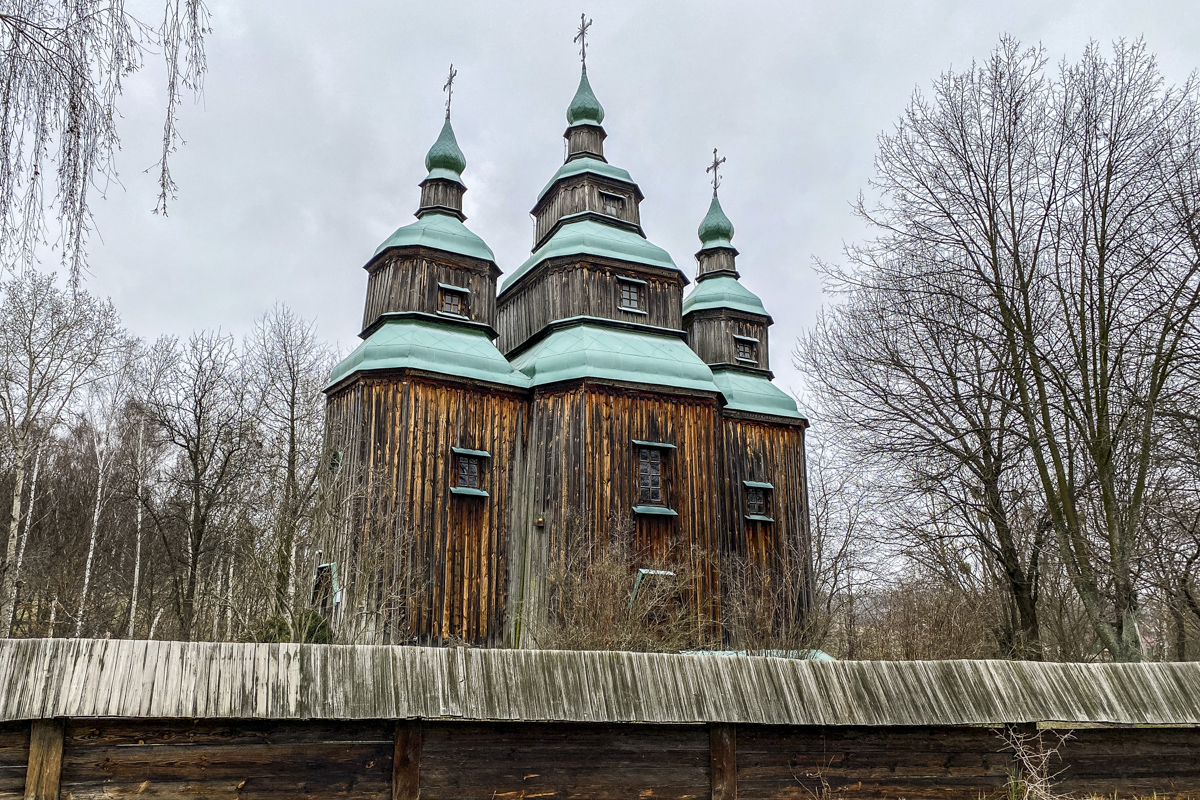 Where to Stay in Kiev in the Ukraine

I really enjoyed my stay at the Premier Hotel Rus. Perched above the main street Khreshchatyk with great views over the city that surrounds it. It is a few minutes’ walk from the subway so access to the sprawling city of Kiev is relatively easy. The rooms are large, light and comfortable and the staff very helpful and friendly. I particularly enjoyed the large selection on the breakfast buffet and some really good coffee despite being dispensed by machines. The hotel is close to some lovely traditional restaurants, cheerful cafés and a modern shopping mall. Amenities include a cosy bar and fee WiFi throughout the hotel. 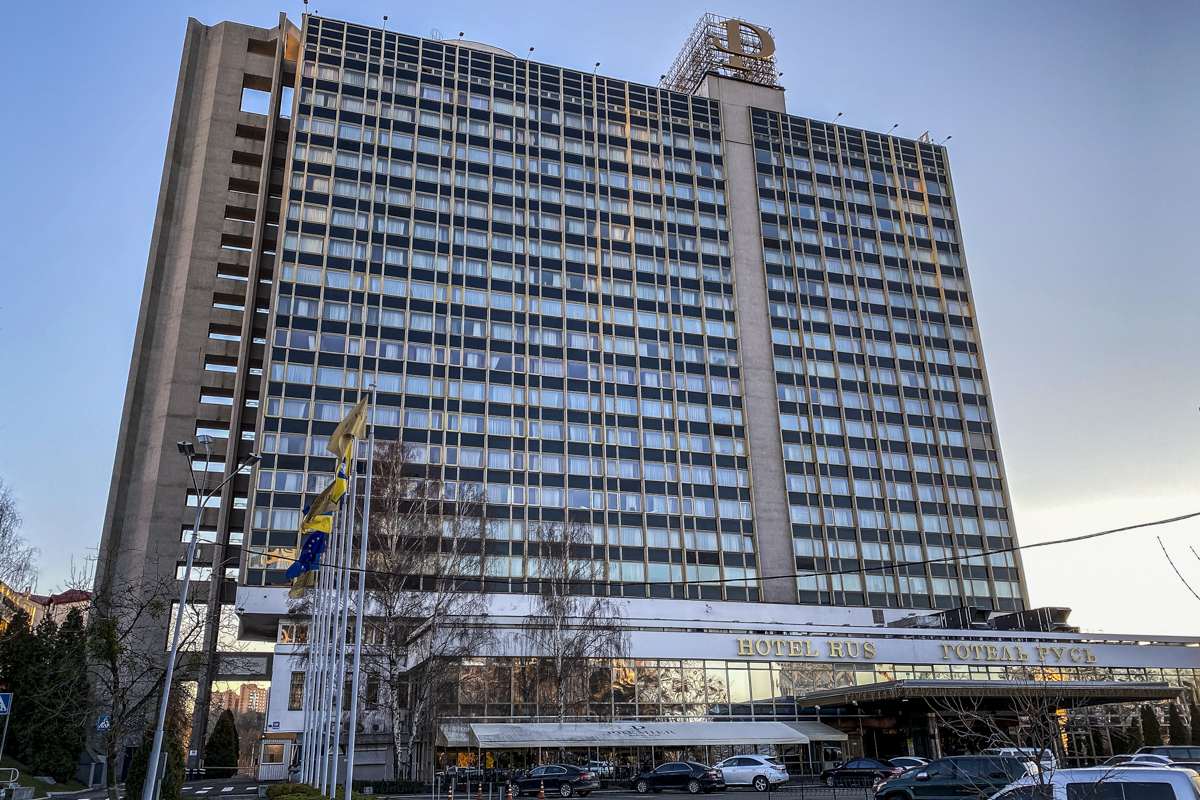 How to Get to Kiev in the Ukraine