On first impression Landstrasse or Landstraße, District 3 of Vienna, is simply a suburb on the main roads leading directly into the historic core of Vienna. But look closely and steeples, domes and huge, but beautiful residential blocks will draw you into side streets dotted with extraordinary edifices.

Vienna in was once the capital of the Austrian Empire that occupied a large area and several countries of central Europe. It was created by the Hapsburg Monarchy a sovereign dynasty that ruled Austria from the fifteenth to the twentieth century. Landstrasse, meaning country road, and the area known as the third district of Vienna has absorbed some of the neighbourhoods that reflect the former glory of this beautiful city. 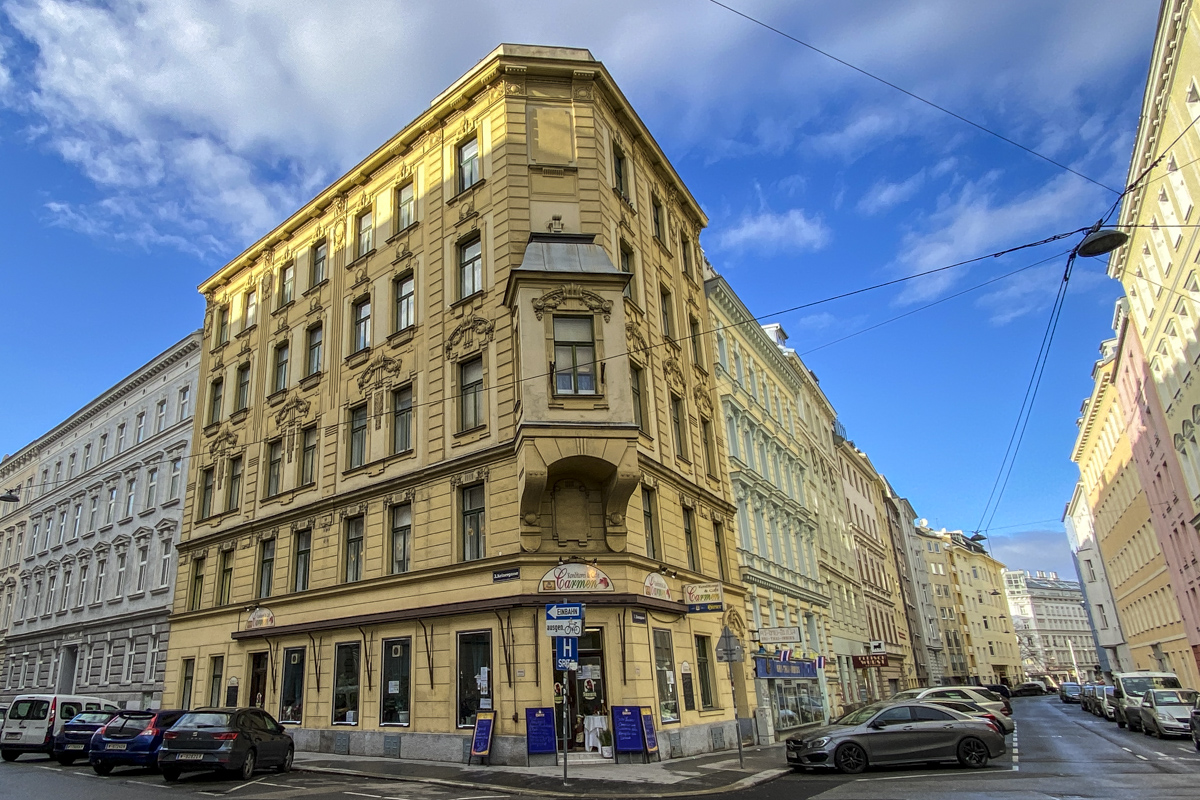 This district was established during the nineteenth century. The southern part of Landstrasse is predominantly residential as it is more affordable. A highlight in this area is the district of Simmering often dubbed Gasometer City. A cluster of four massive gas tanks was built here to provide power for the city centre during the nineteenth century. When they were opened in 1896 they were among the largest in the world. A fifth tank was added later. The gasometers remained in use for nearly one hundred years by which time the original Imperial four had been listed and the newest one had been demolished. The tanks fell into disuse when they were no longer needed. Then, during the 1999s an architectural competition was held and subsequently they were converted into residential blocks preserving the original exteriors and the roofs. In the centre of Landstrasse is the Rabenhof or Raven’s Court. This huge development of apartment houses was created during the socialism period of the 1920s on the site of a former army base. Featuring archways and courtyards between blocks of housing it is more attractive than one might imagine. There is also a theatre here, the Rabenhoftheater, which is popular for cabaret and comedians. Moving north the buildings are more elegant and include large palazzos now converted to embassies and residential blocks. It is also home to one of the most significant places in Vienna, the impressive Belvedere. 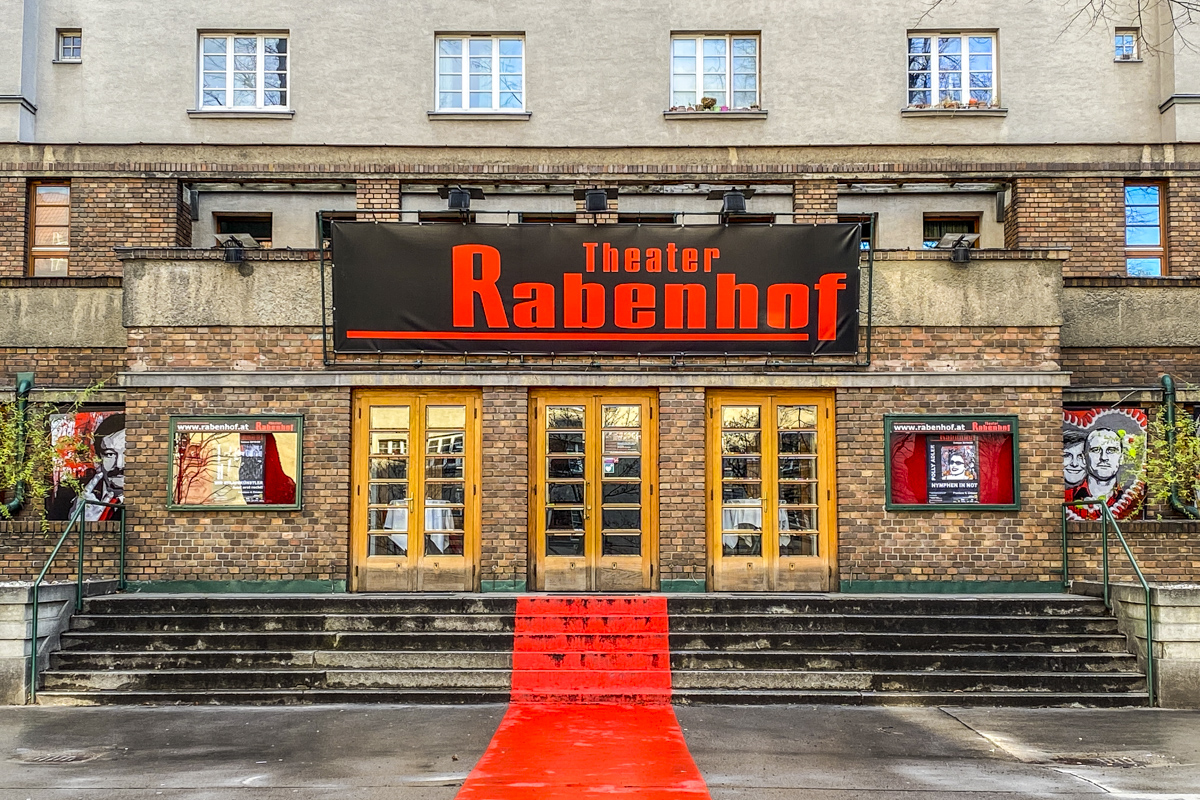 Belvedere in Landstrasse, District 3 of Vienna

Belvedere is a large park featuring two stunning Baroque palaces, Upper and Lower Belvedere. I entered this unique complex through the gate on Rennweg in Landstrasse. Built during the eighteenth century by Prince Eugene of Savoy an Austria General. He commissioned Johann Lukas von Hildebrandt, a famous Baroque architect, to build him a residence for the summer. The prince used Lower Belvedere as his residence. When the prince died the whole complex passed to the Empress Maria Theresa. She housed the imperial collections in Upper Belvedere thereby creating one of the first public museums in the world. Entrance to the park is free but the two palaces attract and entrance fee. The staterooms of the two palaces, situated at either end of the park, are hung with works of art ranging from the Middle Ages to the present day. Collectively these galleries are known as the Austrian Gallery. Belvedere also features Belvedere 21. This building, created by the architect Karl Schwanzer in 2002, is not just a showcase for contemporary art but is also interesting in its own right. 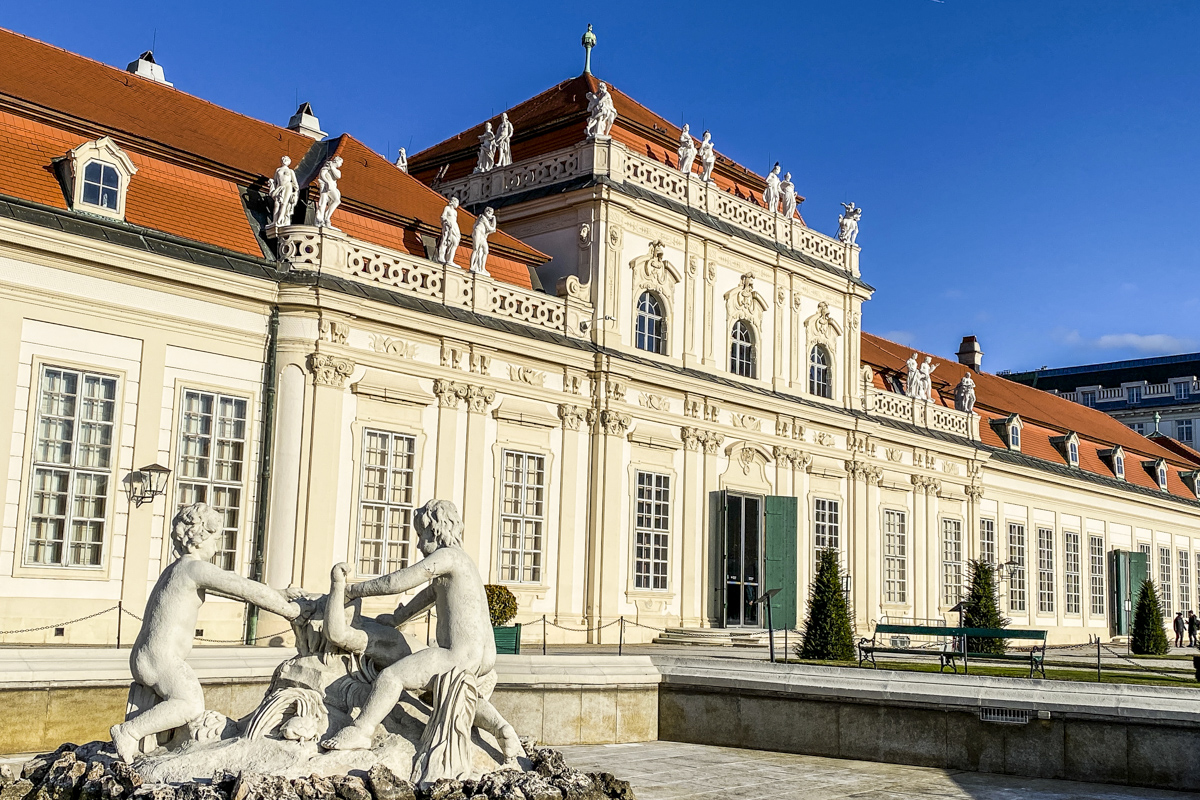 Next door to Belvedere is the Salesian Church one of the largest and most impressive Baroque churches in the city. It is the church of a monastery of Salesian nuns that was founded by the widow of Emperor Joseph, Empress Amalia Wilhelmina. It was built on land laid to waste thirty years earlier by Turkish troops that the Empress had acquired at a very reasonable price. The church, crowned by an enormous cupola, was completed in 1726. The inside of the cupola was completed sometime after the building was finished as the Empress insisted it be done by Antonio Pellegrini an Italian artist who was much in demand at the time. However, instead of painting frescoes he applied oil paint to a dry surface which makes this church unusual. Following the completion of this magnificent building this area became a fashionable place to live and elegant palazzi soon began to appear here including the Palazzo Metternich on the opposite side of Rennweg. 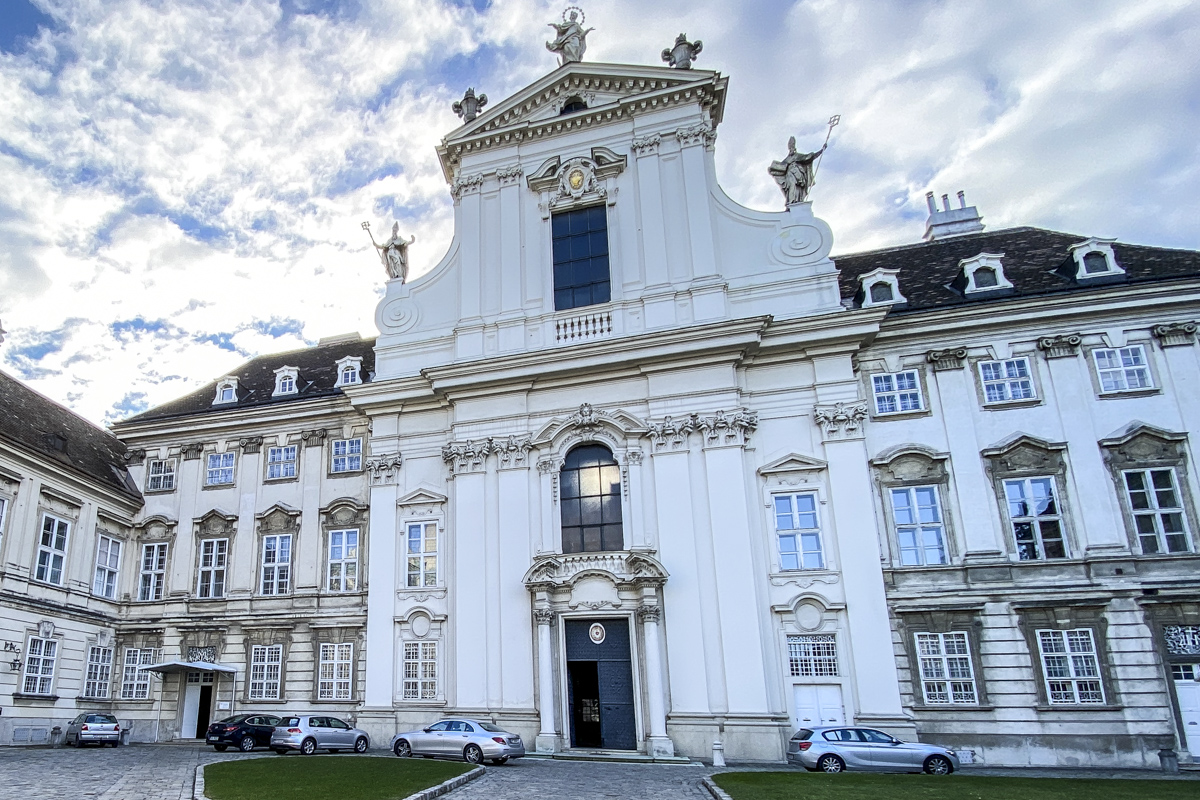 Palazzo Metternich now the Vienna Embassy, one of the most prestigious of the Italia diplomatic offices, was formerly owned by the Grand Chancellor, Prince Klemens Wenzel Lothar von Metternich-Winneburg. Born in 1773 he was a champion of conservation and helped from the victorious alliance against Napoleon which restored Austria as a leading power in Europe and host of the Congress of Vienna in 1814. Metternich inherited this enormous building from his father-in-law in 1797 but rarely lived there as his role as Ambassador of the Emperor kept him away from Austria. When he did return, in 1814, he built a small one-storey villa in the middle of the garden. He made other alterations to this building including an extension following the purchase of the land next door. Metternich eventually settled here permanently in 1951 and died here eight years later. In 1873 when the Metternich family suffered financial ruin the property was divided into lots and in 1908 the palazzo was sold to Italy. On Jaurèsgasse, behind this palazzo is the magnificent Russian Orthodox Cathedral of Saint Nicholas. 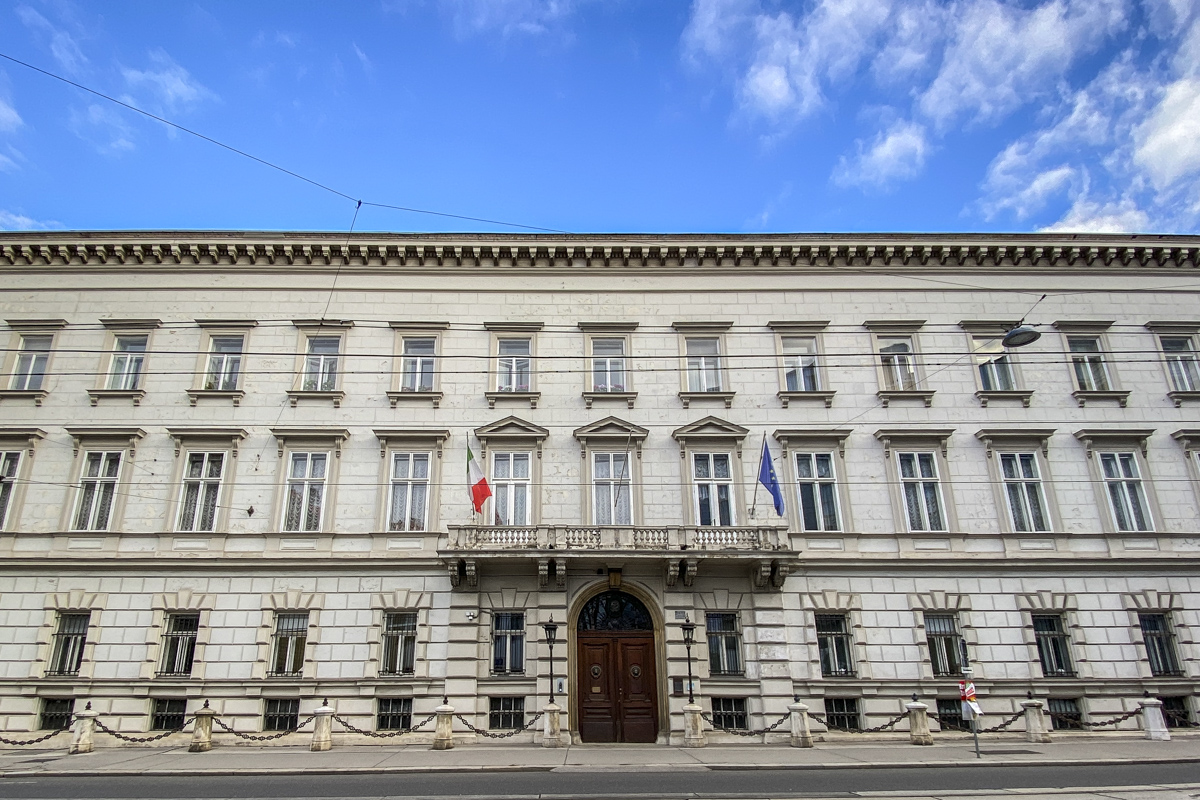 The Byzantine style Russian Orthodox Cathedral of Saint Nicholas has had a turbulent history since it was first built between 1893 and 1899. Some of the costs were covered by Alexander III personally to ensure the Russian community had a place to worship. The church was closed at the beginning of the First World War and was not re-opened until after the end of the Second World War. In 1962 the church was granted cathedral status to serve a growing community of members of the Russian Orthodox followers in Austria. The ornate decorations of the upper church are a complete contrast to the simple style of the lower church. Following several renovations this amazing two-storey building topped with golden onion domes and a cross decorated with crystal prisms is definitely worth a detour to see it. Emerging onto the main street (of the same name) through Landstrasse visitors may be curious regarding the pretty church in the middle of an austere building, this is the Herz-Jesu Hospital. 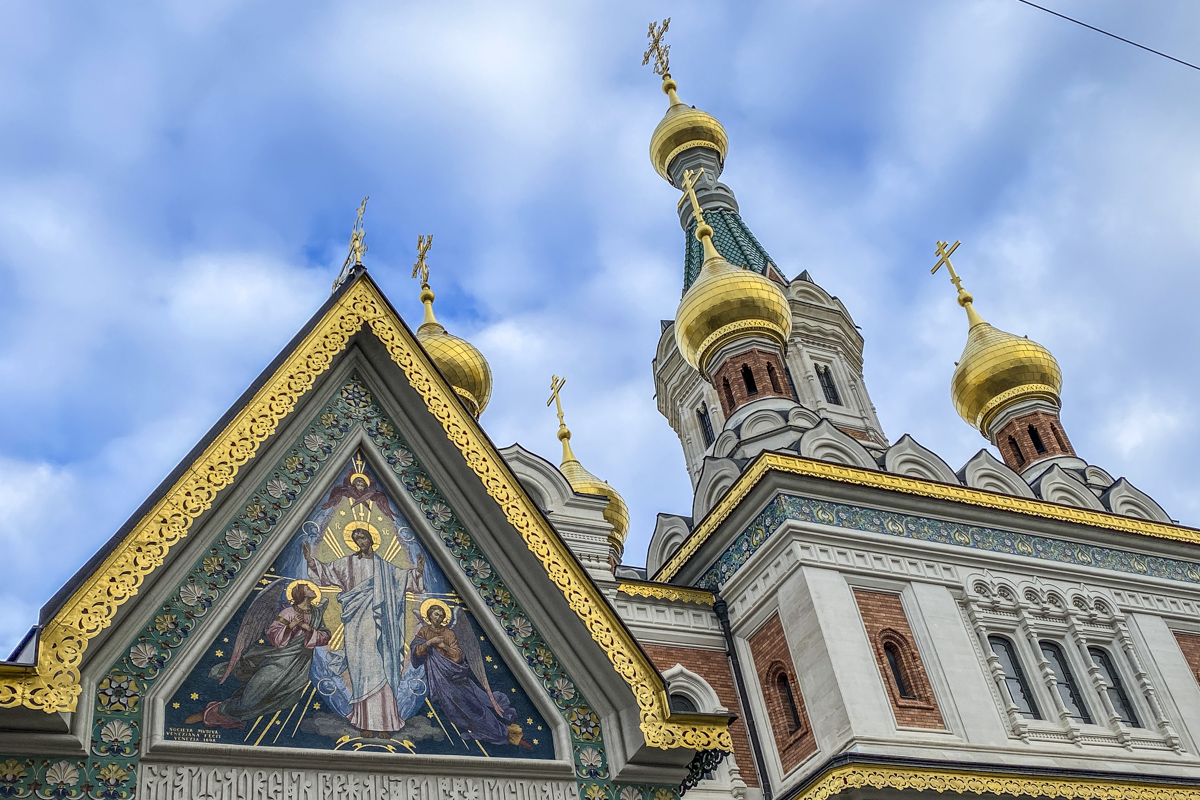 The Herz-Jesu Hospital in Landstrasse, District 3 of Vienna

The enormous Herz-Jesu Hospital on Keinergasse in Landsgrasse, the main street through District 3, is a hospital with a history. A congregation known as the Servants of the Sacred Heart of Jesus was founded in Paris in 1866. Some of their sisters came to Vienna in 1873 and began looking after the sick. Since then the original centre has expanded and today it is a large non-profit-making modern hospital. The original buildings here, the mother house where the nuns first lived, the oldest part of the hospital, the church, the monastery and the school are now listed buildings. 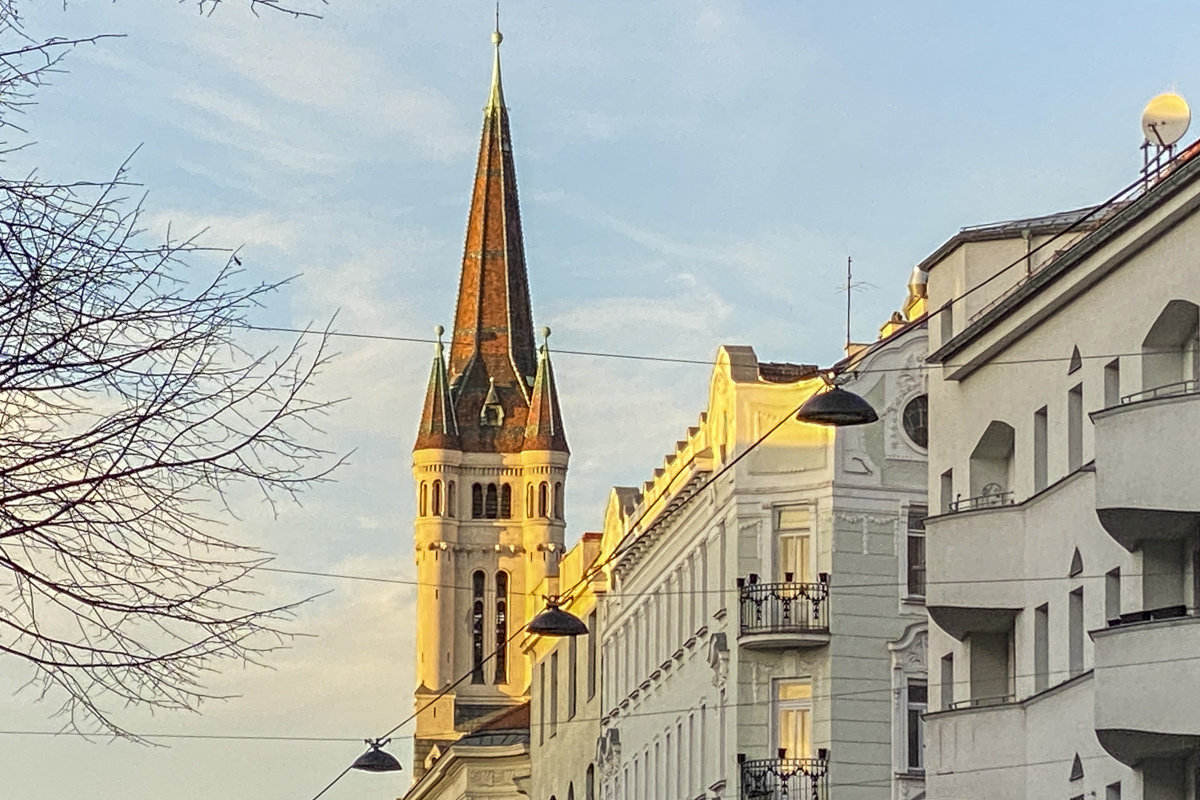 Hundertwasserhaus in Landstrasse, District 3 of Vienna

Colourful and quirky Hundertwasserhaus is another architectural delight in Landstrasse. It is a residential building and is named after its designer, Friedensreich Hundertwasser. In habitants of this building can decorate the exterior walls around their windows as they like. The trees growing on the balconies and roof terraces create the impression of a small forest in the city. As the building is a private residence it is not open to the public. However, opposite this building is the Hundertwasser Village which Hundertwasser created from an old workshop. He created a shopping centre here complete with a village square, a bar and shops. Nearby, also in his style, is the crooked Kunst Haus Wien which houses a permanent Hundertwasser exhibition and temporary exhibitions of other artists. 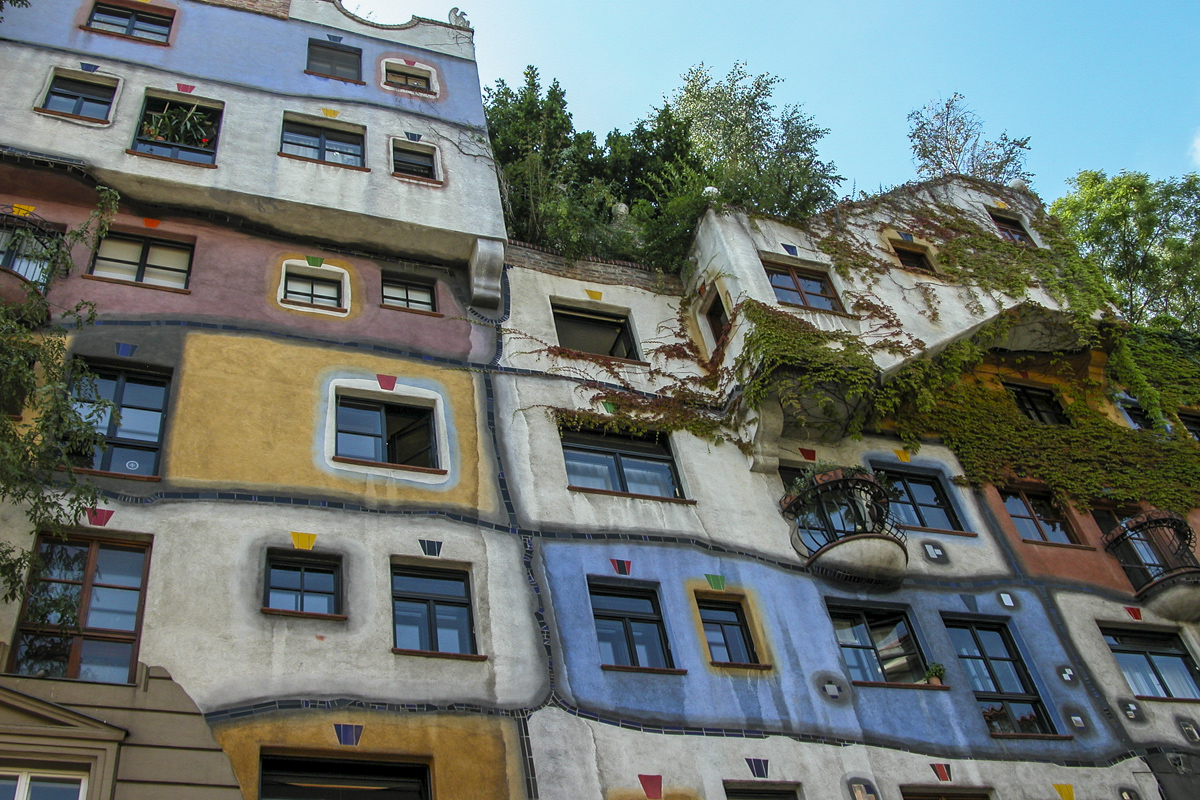 Where to Eat in Landstrasse, District 3 of Vienna

Salm Braeu restaurant is housed in a heritage building that reflects the history of the surrounding area. It stands on the site of a vineyard and wine cellar once owned by the Mayor of Vienna. In 1717 he sold it to the Empress Amalia Wilhelmina to build the convent and church next door to Salm Braeu brewery and restaurant. In 1944 the brewery acquired the site where the stables and servants’ quarters of the convent once stood. Since then the crafted Austrian beers of Salm have become well-known world-wide. The restaurant was opened in 1994 and serves good, traditional food in convivial surroundings. But not so convivial if seated in the cellar that houses the tanks of the brewery.

Where to Stay in Landstrasse, District 3 of Vienna

The Best Western Amedia Premium Hotel on Landstrasse is in the centre of the Landstrasse district so ideal for exploring the area. As there are regular trams, buses and metro trains into the centre of Vienna it is also a good base for exploring the whole city. The rooms are very comfortable and well-equipped. There are several cafés, bars and restaurants close by and a Lidl next door for all those items you may have forgotten to pack. It is also very quiet at night – a big plus after long days exploring the city. 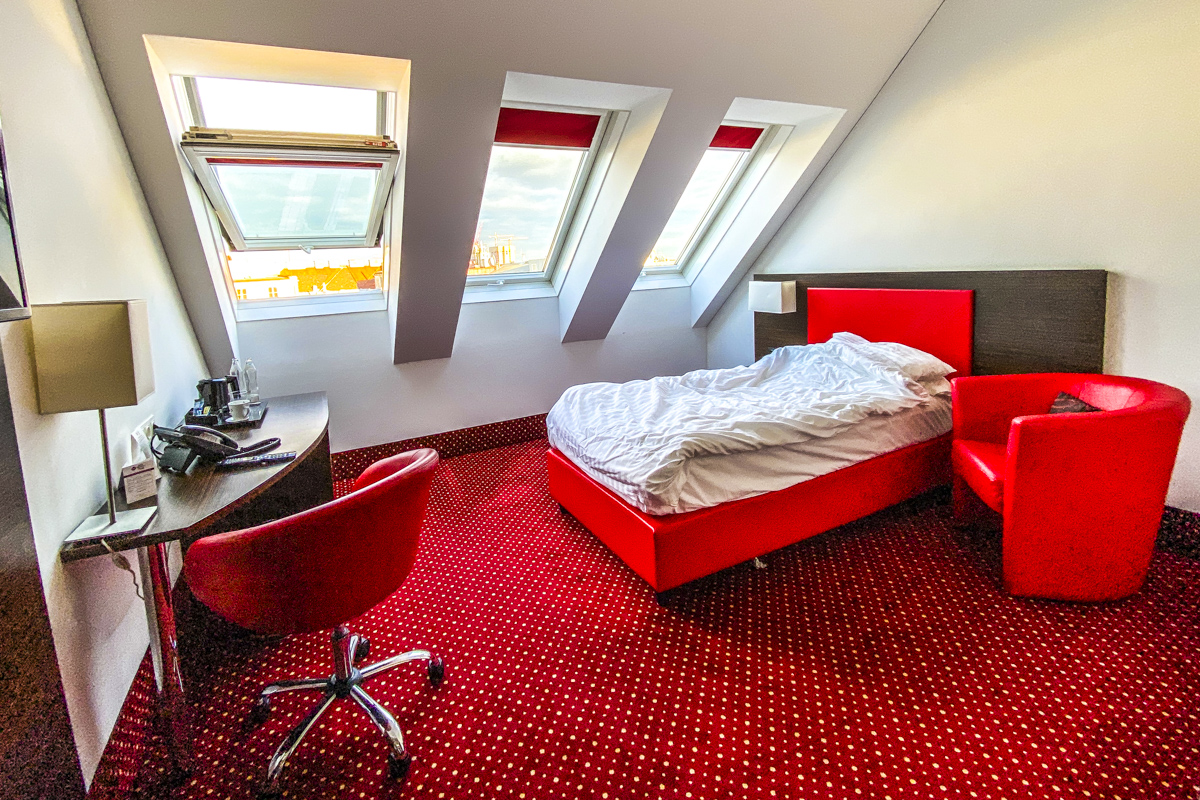 How to Get to Landstrasse, District 3 of Vienna

I flew to Vienna International Airport with British Airways. Vienna has a very well-developed public transport system and there is a train stations and bus station at the airport. Landstrasse is served by line U3 on the metro and the two metro stations most central to this district are Kardinal-Nagl-Platz and Schlachthausgasse. The 71 tram follows Rennweg through Landstrasse and into Rathausplatz.

Landstrasse, District 3 of Vienna This article is now featured on GPSmyCity.  To download this article for offline reading or travel directions to the attractions highlighted in this article, go to Walking Tours in Vienna on GPSmyCity