The majority of visitors to Mostar go straight to the area around its famous bridge, Stari Most. Preferring to avoid the crowds amassed in the old town centre I decided to leave that area until last.

As the narrow, cobbled streets of the old town of Mostar in Bosnia & Herzegovina are pedestrian-free all vehicles have to park on the outskirts. It was here that I discovered the Mostar Peace Bell Tower.

The Peace Bell Tower in Mostar, Bosnia and Herzegovina

The Mostar Peace Bell Tower was completed in 2000. Built adjacent to the Franciscan monastery it was intended to be a symbol of peace. Citizens and visitors are invited to ascend the 107 metre tower, by lift and stairs (entrance fees apply) to a viewing area at 75 metres which opened in 2016. From here there is a 360° panoramic view of the city below. This tower, which stands beside the new Catholic church stands on what was once the front line separating Muslims and Christians during the war in the 1990s. Today, it is the tallest building in Mostar.R 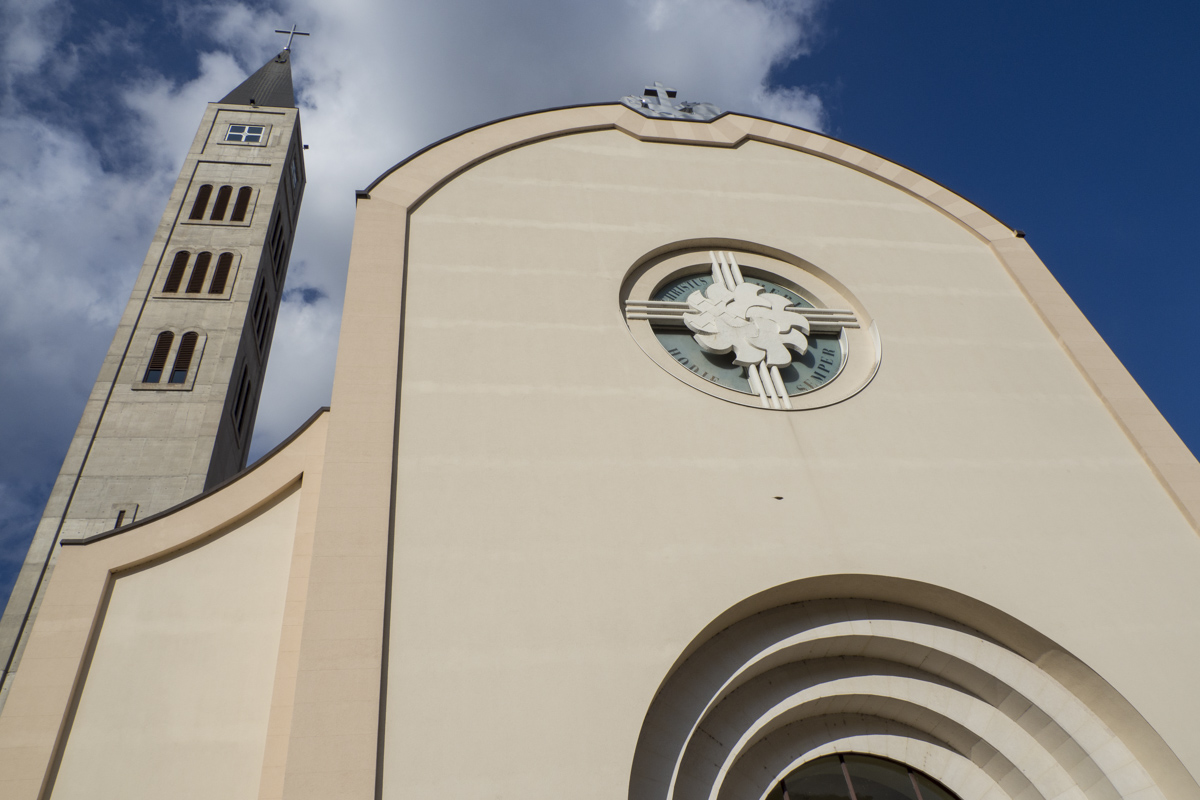 Next to the Peace Bell Tower is the Catholic Church and Franciscan Monastery . The church, dedicated to Saints Peter and Paul, was also rebuilt in 2000. It replaced the church that was originally built on this site in 1866 by the Ottomans then rulers of this region. Seven years earlier an acclamation had guaranteed religious freedom to Christians. Next to the church the Franciscans built a monastery with a well-stocked library. The original church was badly damaged during the Second World War. It was rebuilt during the 1980s but this new church was then destroyed by the Yugoslavian National Army during the war in Bosnia and Herzegovina. As the Catholic community in Mostar continues to grow the new church is larger than the original building. The monastery complex still includes a library which houses a prestigious collection of fifty thousand ancient books from both the Western and Eastern worlds. Also in this building there is an important collection of art works featuring Italian Masters of the sixteenth and seventeenth centuries as well as some more contemporary art. The simplicity of the exterior, which does not resemble a traditional church, is replicated inside. I was impressed by the interior of this church. It is very large but very peaceful with pale yellow walls and striking orange decorations. This complex is at the top of the one main street that descends to the centre of the old town clustered along the banks of the River Neretva. However, I did manage to escape the torrent of tourists heading down to the river by taking a side street that took me to the banks of the Radobolja Creek a tributary of the Neretva. This river is crossed by the Crooked Bridge 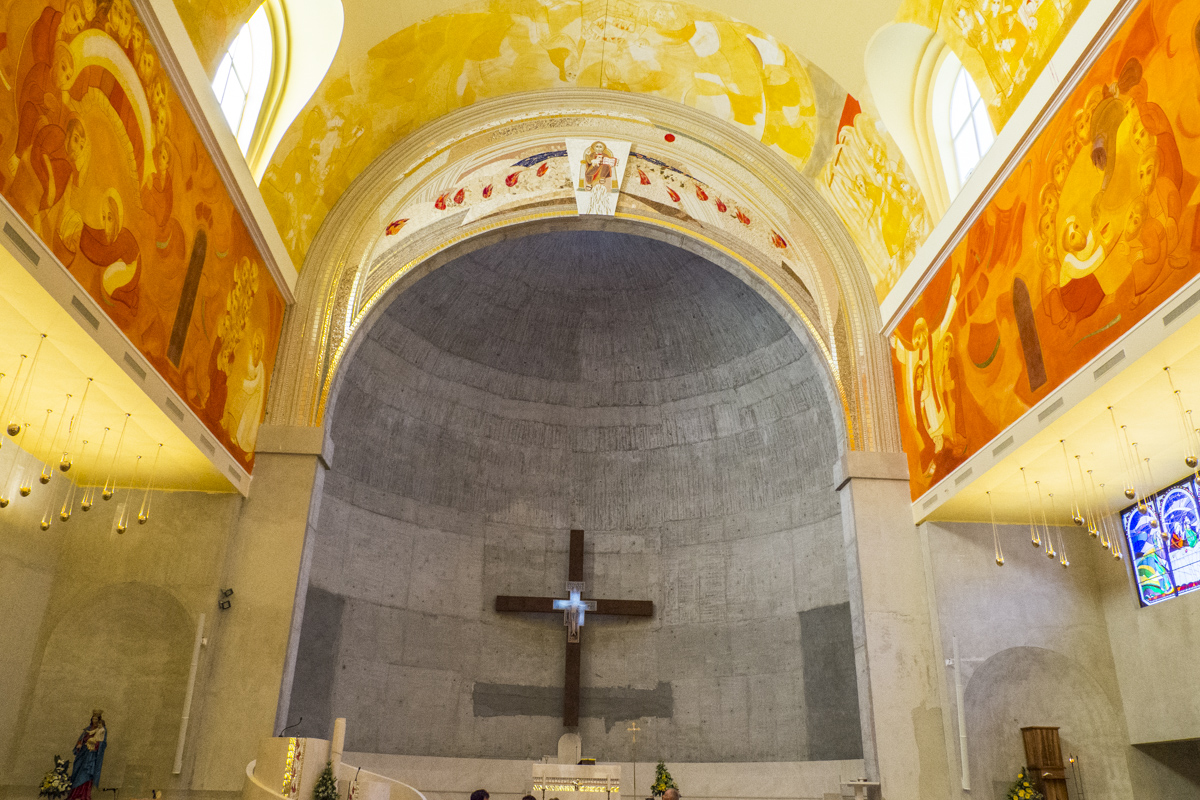 The Crooked Bridge of Mostar in Bosnia and Herzegovina

The Crooked Bridge (Kriva Ćuprija) is a miniature copy of the Stari Most. It was originally built in 1558 eight years before its replica was built. It is thought this was a trial run before attempting the more difficult construction of the Stari Most. In December 1999 disastrous floods caused the collapse of this bridge but it has since been rebuilt. It is a very pleasant walk along the banks of this creek where small, shaded restaurants offer a chance for rest and refreshment. Looking down on this little valley is the Nezir-aga’s mosque 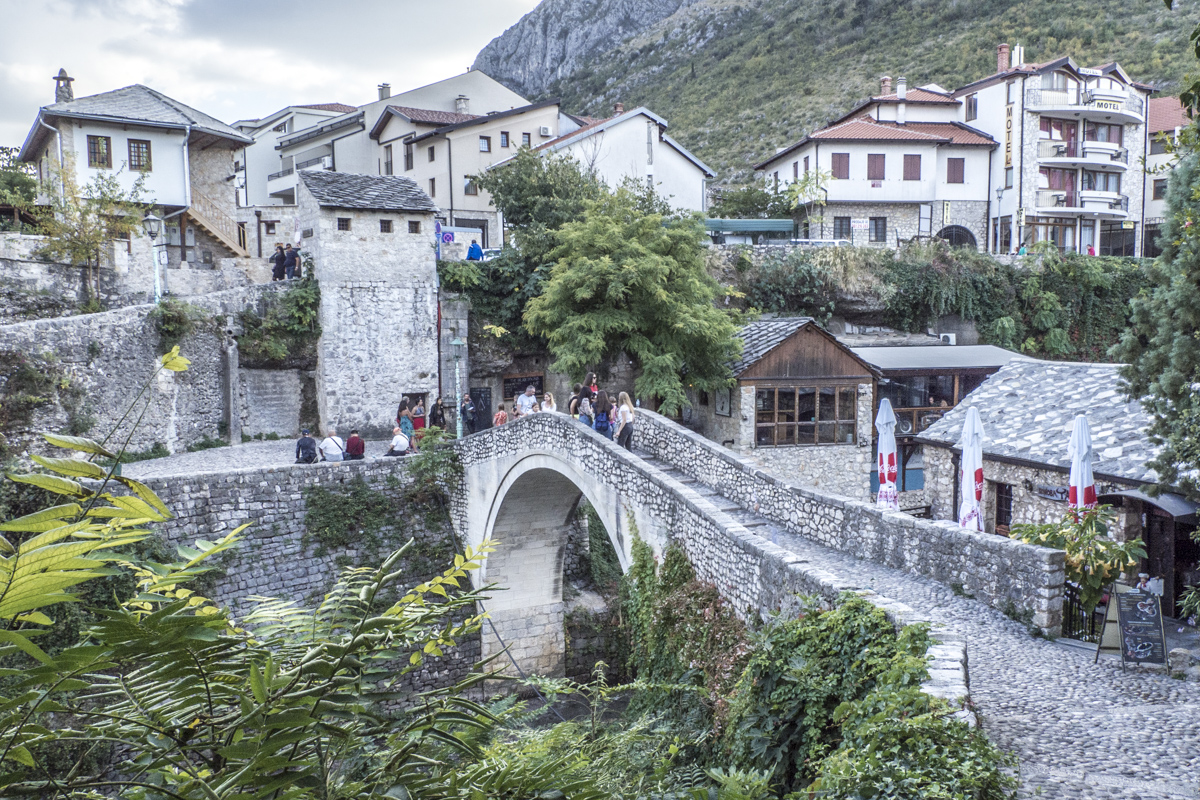 Nezir-Aga’s Mosque in Mostar in Bosnia and Herzegovina

Believed to have been built during the second half of the sixteenth century this is believed to be the oldest mosque on the west side of the Neretva. Very little is known about this mosque as the deed of foundation has been lost. It was closed in 1932 and most of it was destroyed in 1950 leaving only the basics including the minaret. Legend has it that the founder was a rich man and the title Aga suggests he was in the military service. Regaining the main street, it was not long before I discovered another side street that took me down some steps to the bank of the Neretva River where I had a great view of Stari Most, also known as the Old Bridge. 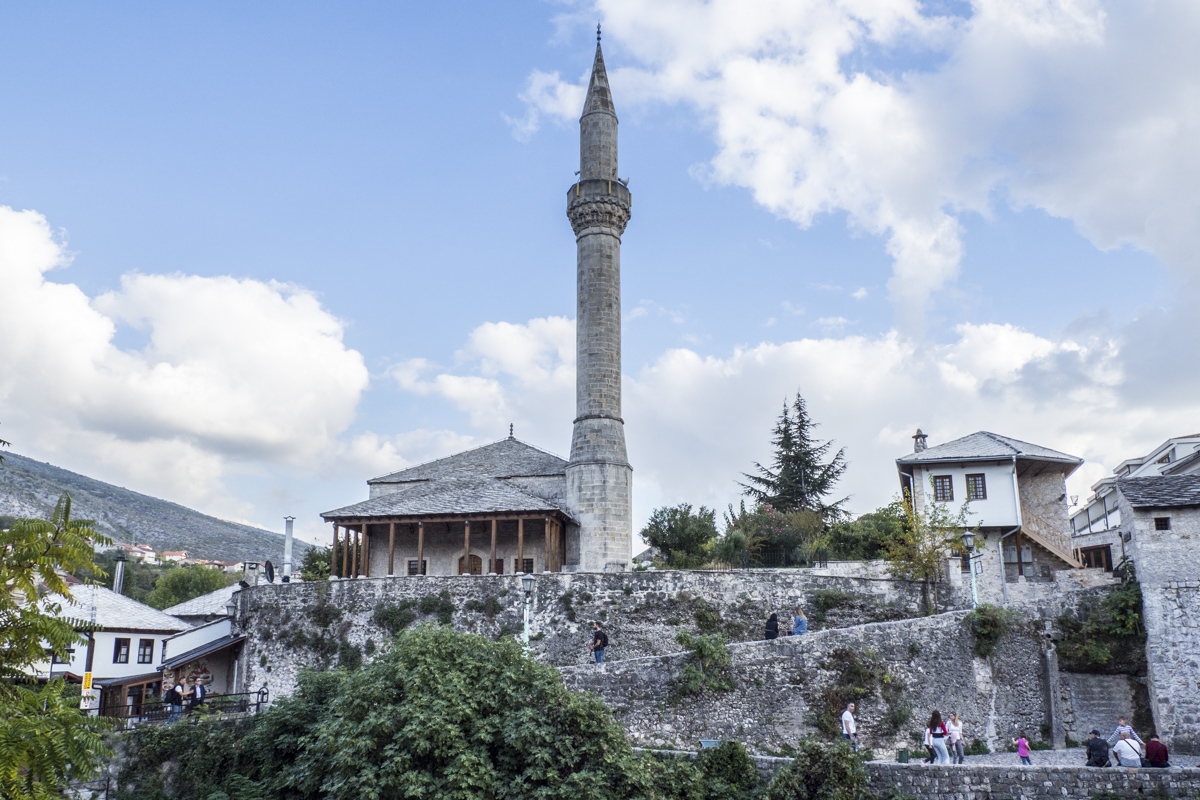 Stari Most in Mostar in Bosnia and Herzegovina

Stari Most is definitely the star of the show for most people who visit Mostar. It gave its name to the city. When it was built its single stone arch construction was an architectural first. It is also the seat of legends. Built when the Ottomans ruled here it is said that the Turkish architect Mimar Hajrudin, who designed it, stayed under the bridge for three days and three nights to demonstrate his faith in the stability of it. It remained intact for the next four-hundred-and twenty-seven years. Then, in1993 it was destroyed during the war in Bosnia and Herzegovina. It took ten years to restore the bridge using the original building techniques. Tenelija stone was used once again, brought from the quarry that supplied the stones hundreds of years earlier. Some surviving stones were re-used as well. Its completion united the town once again. And the bridge its surrounds have been recognised as a world heritage site by UNESCO. Every July a diving competition takes place from this bridge but it is not unusual to see local boys testing their courage by diving or jumping off its parapet. The bridge is flanked by large stone towers on each side. 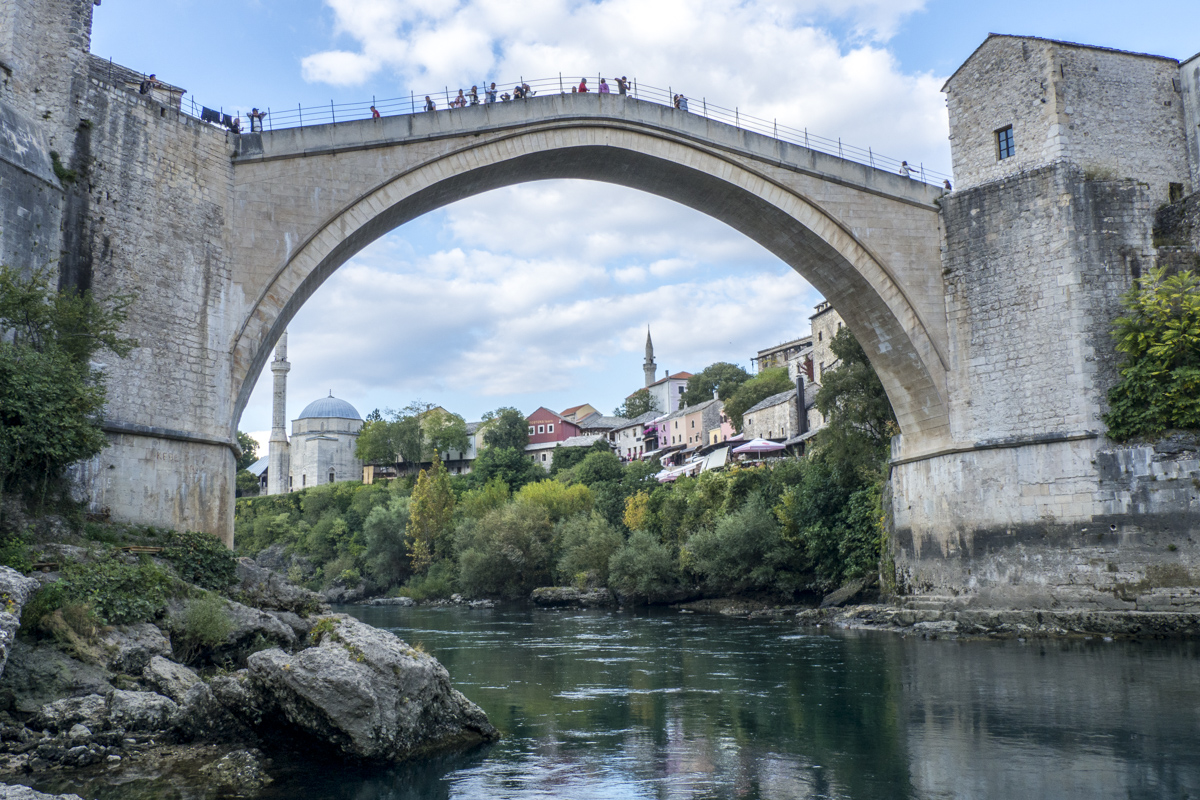 The Towers of Stari Most in Mostar in Bosnia and Herzegovina

The towers that stand guard at either end of the bridge act as buttresses for the bridge itself. Two towers guard the eastern side the Herceguša and Tara Towers. The semi-circular Tara Tower was where the Ottomans stored their ammunition. Today it houses the Museum of Stari Most. Herceguša Tower, built during the first half of the fifteenth century stands behind Tara Tower. It also houses a museum of the same name. On the western side the lower floors of Halebija Tower where once used as a prison with a small barracks and look-out post on the floors above. After slithering across the shiny cobbles stones that cover the steepish arch of the bridge I arrived in the eastern part of the old town. This area is more typical of Ottoman times as the area on the other side of the river was re-developed by the Austrians when it was part of the Austro-Hapsburg Empire between 1878 and 1918. 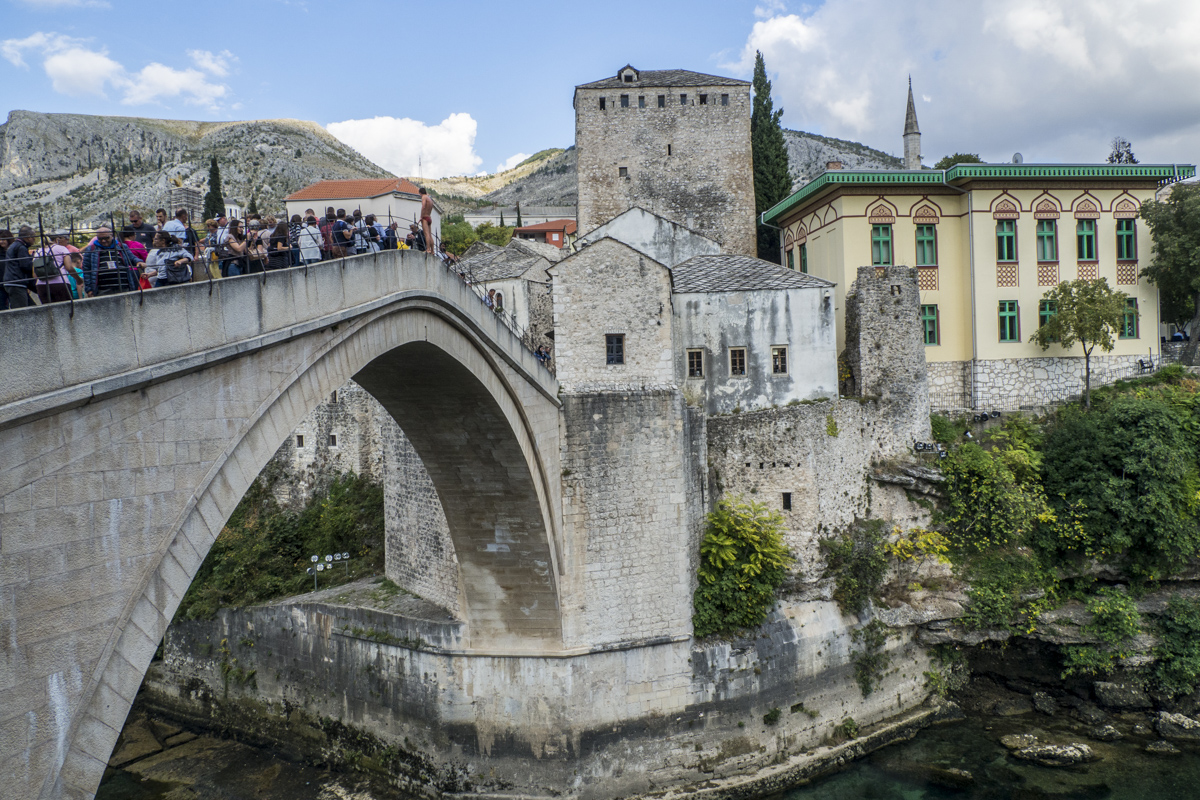 The Old Town of Mostar in Bosnia and Herzegovina

A colourful bazaar lines the little streets on the river bank. Colourful shops and stalls sell an amazing variety of items from old bullets to complete Turkish tea sets. Amongst the melee of retail outlets small cafes offer splendid views of the river and Stari Most from terraces that stretch over the water. 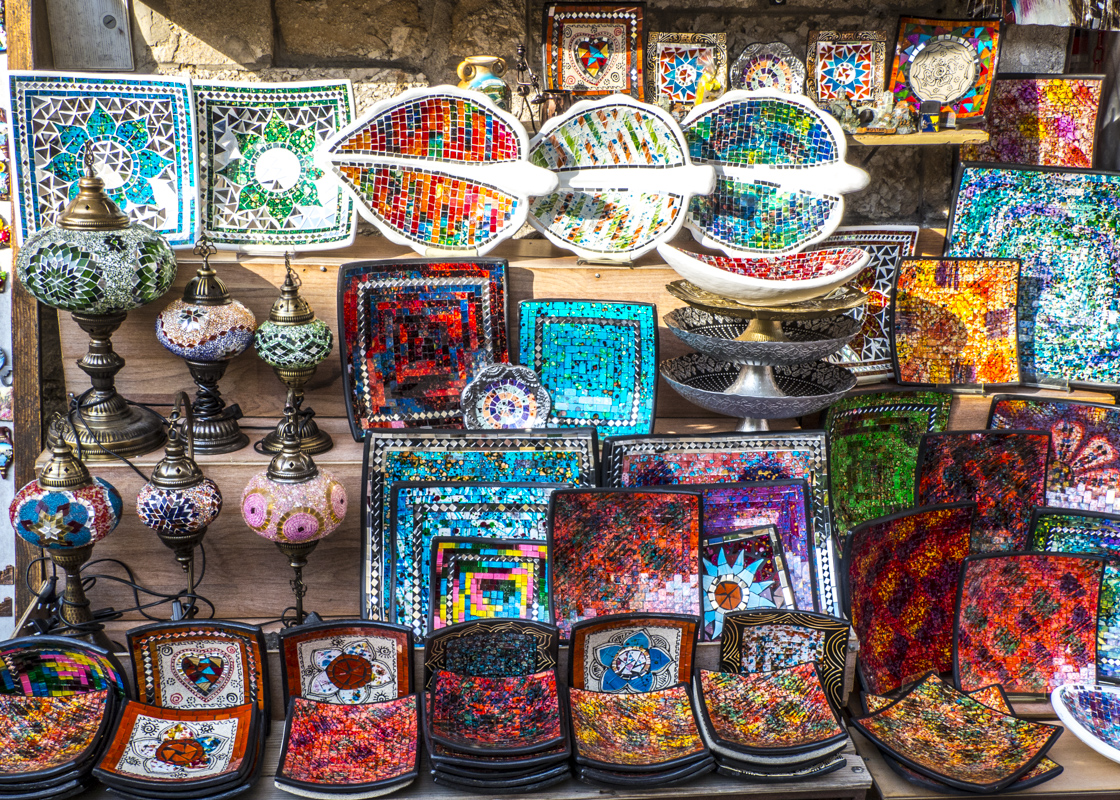 The lovely Koski Mehmed Pasha Mosque resides on this side of the river. This mosque, built during the first quarter of the seventeenth century. Open to the public it is deemed to be the most beautiful mosque in Bosnia and Herzegovina. It was also badly damaged during the Bosnian War and has since been rebuilt. It is slightly smaller than the other mosque in the city Karađoz Bey downstream from Stari Most on the same side. This sixteenth century Ottoman mosque as a large dome and a high minaret. It is the largest in the region and still functions as an important place of worship. Set back from the river just beyond the Koski Mehmed Pasha Mosque is the unusual Nesuh-Aga Vučjaković Mosque which translates as the mosque under the lime tree. Its architecture is typical of the Dalmatian coast of neighbouring Croatia and it is set in a pretty garden. 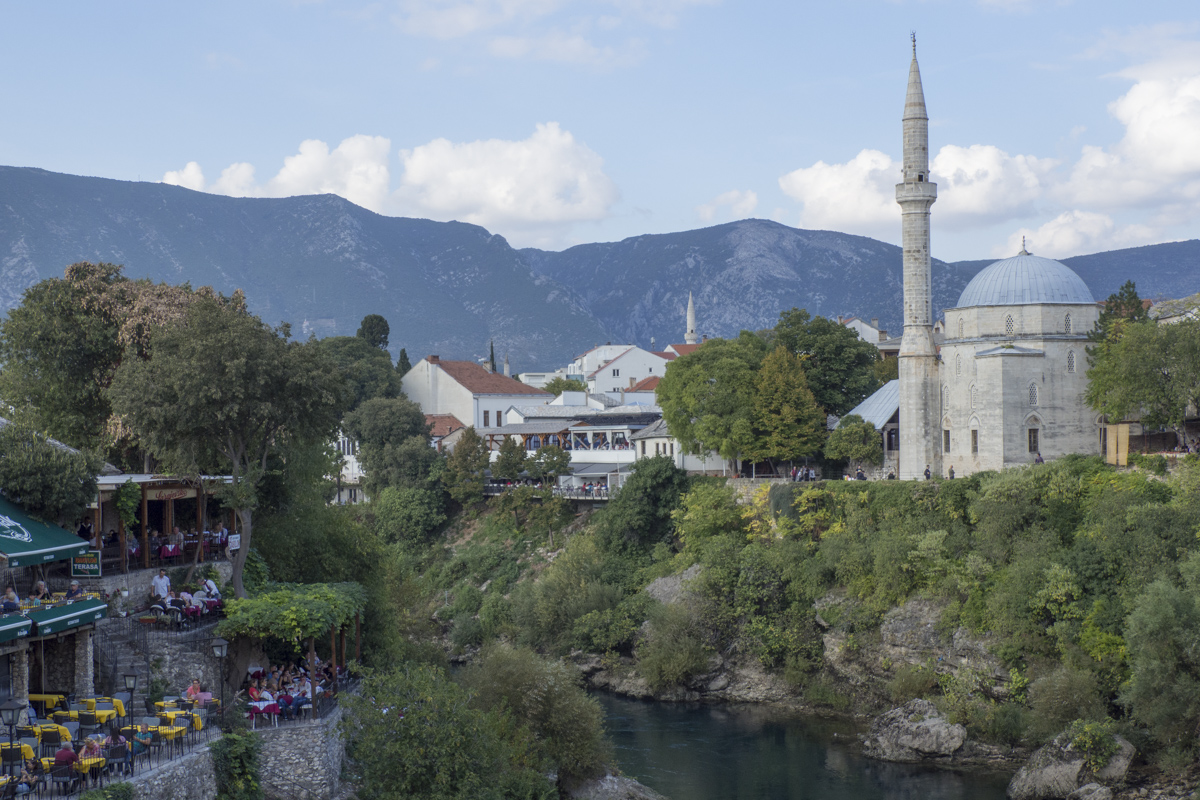 When I visited Mostar I was staying in Mlini in Croatia at the Mlini Hotel on the Dubrovnik Riviera – ideally placed for trips into Dubrovnik and over the nearby border to Bosnia Herzegovina and Mostar. 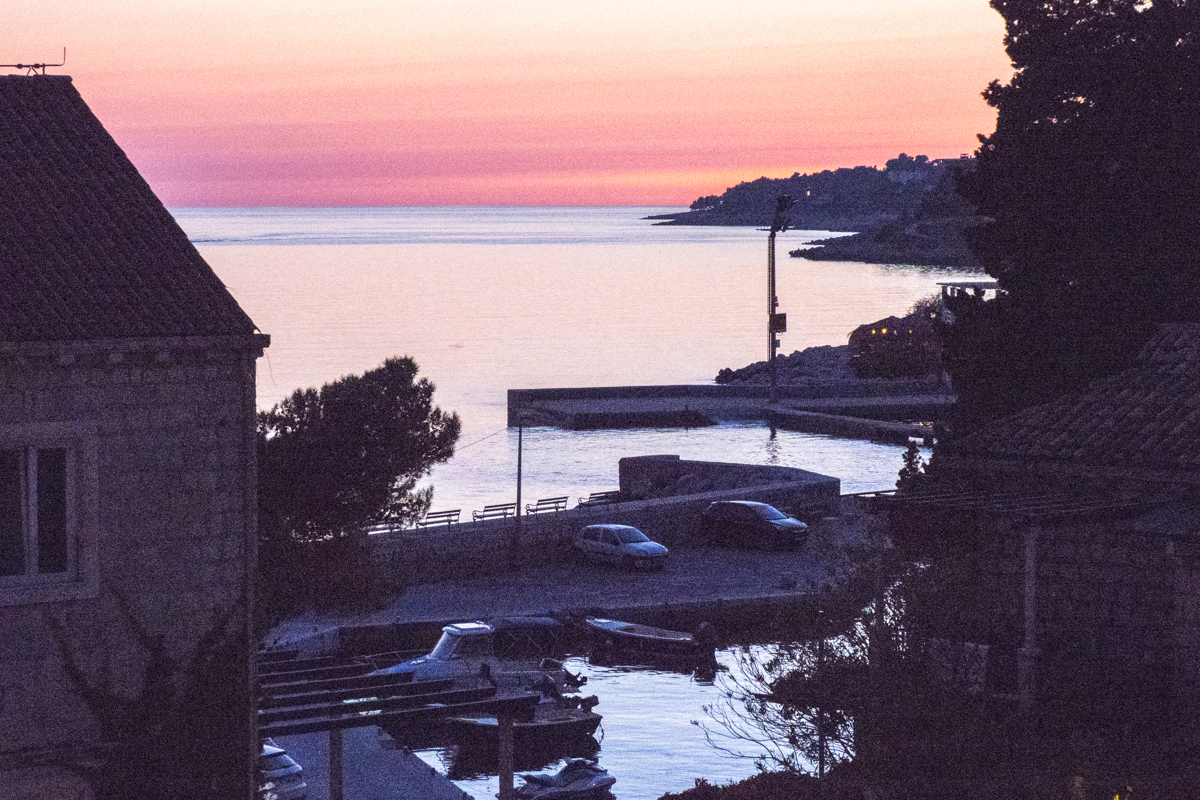 How to get to Mostar in Bosnia and Herzegovina

Fly to Dubrovnik then enjoy the two-hour scenic journey. But a hire car may be a better option in order to explore further afield. I stayed in Mlini in Croatia and visited Mostar on a day trip.