Going Underground in Exeter in Devon

Hard hat on head I followed our guide, Helen, into the underground passages that stretched for over four hundred metres under the historic city of Exeter.

These underground passages in Exeter in Devon were built during the fourteenth and fifteenth century to house the lead piping that carried fresh water from St Sidwell’s wellsr outside the city to the cathedral. They have actually been accessible to the public since 1932 but the only entrance was through a man-hole cover and down a spiral staircase – the same entrance the workmen would have used. Devoid of their pipes, which were used to make bullets during the First World War, they were used as air raid shelters during the Second World War. Today visitors enter the underground passages through a modern visitor centre where they can see a replica of a small section of a passage and learn about the history. Also on display are some fascinating sketches of some iconic buildings in the city as they would have appeared hundreds of years ago. 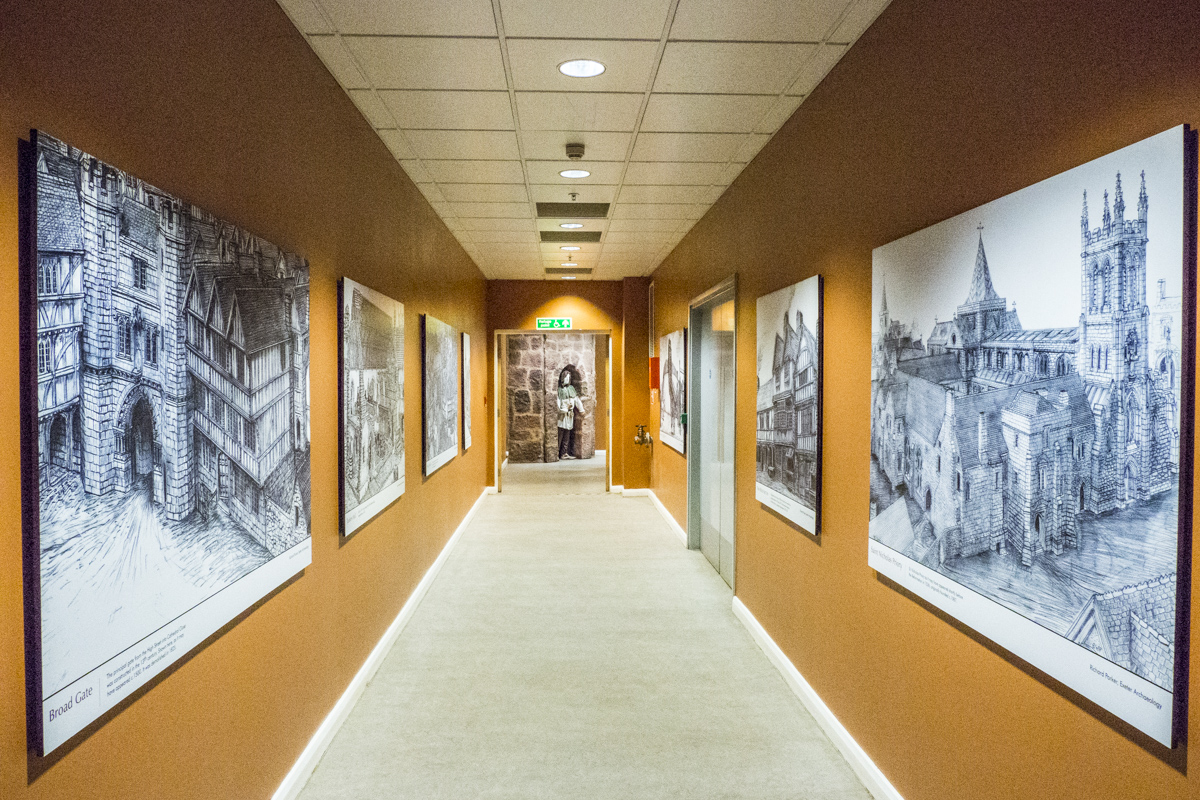 The Underground Passages in Exeter, Devon

The underground passages were not tunnelled. A deep trench was dug, and the sides were lined with stone blocks. The lead pipes were laid along the floor and the passages were capped with a vaulting stone and then filled in. Man-holes constructed at intervals along the route of the passages allowed easy access. Drinking water from the pipes came from fountains called conduits. St Peter’s Conduit was a stone building in Cathedral Close near the West Front of the Cathedral. The city was suppled through the Great Conduit which stood at the top of Fore Street (the Carnac). This was such an important building that when King Henry VI visited Exeter in 1451 it was decorated with rich cloth and wine flowed from the fountain. Sadly, both have been destroyed. For hundreds of years the city maintained and improved the existing passages and built new ones if they had enough money. The final brick built section dates from the late eighteenth century. Around 425 metres of passages were built for the cathedral and city supplies and eighty per cent of them are still there today. Exploring them with Helen gave me a great insight into the history of Exeter – and if was fun too. 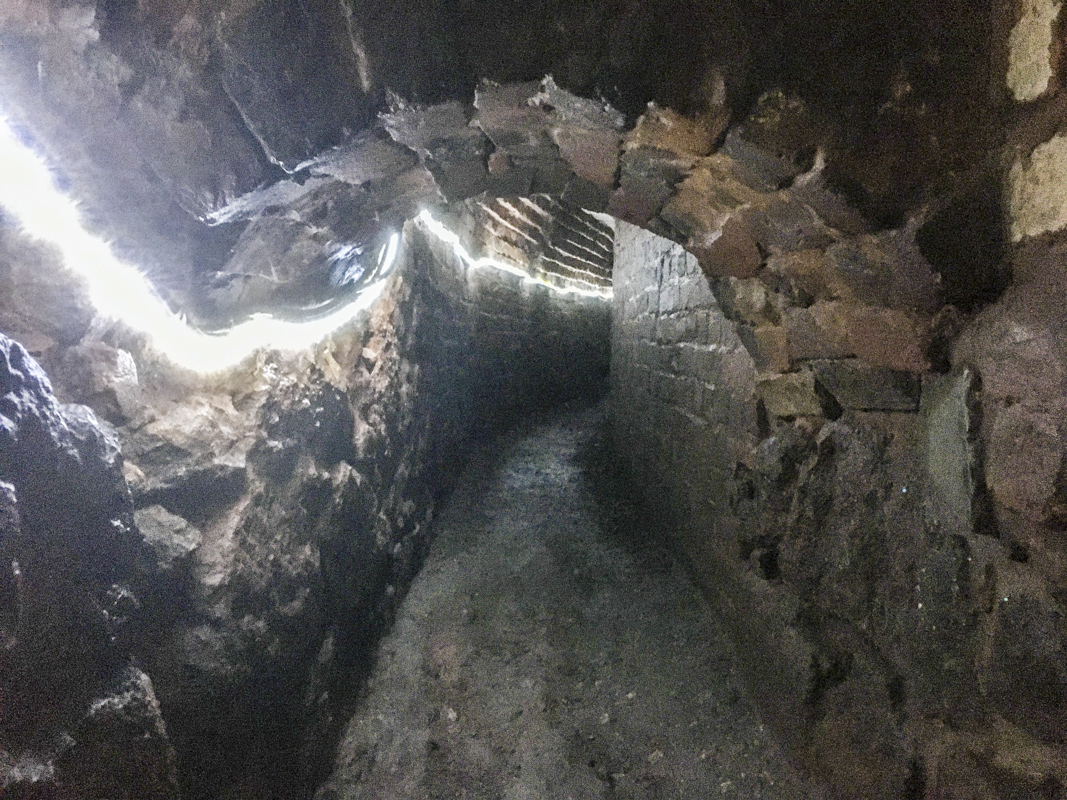 After the thrill of exploring the passages under the old town I decided to explore above ground to see how the town had changed over the centuries since the passages were built. I knew already that the four gates through the city walls had been destroyed to make way for wider roads. The impressive public fountains or conduits had suffered the same fate. But there are still remnants of the ancient city walls and I knew I could find some in Northernhay Gardens. 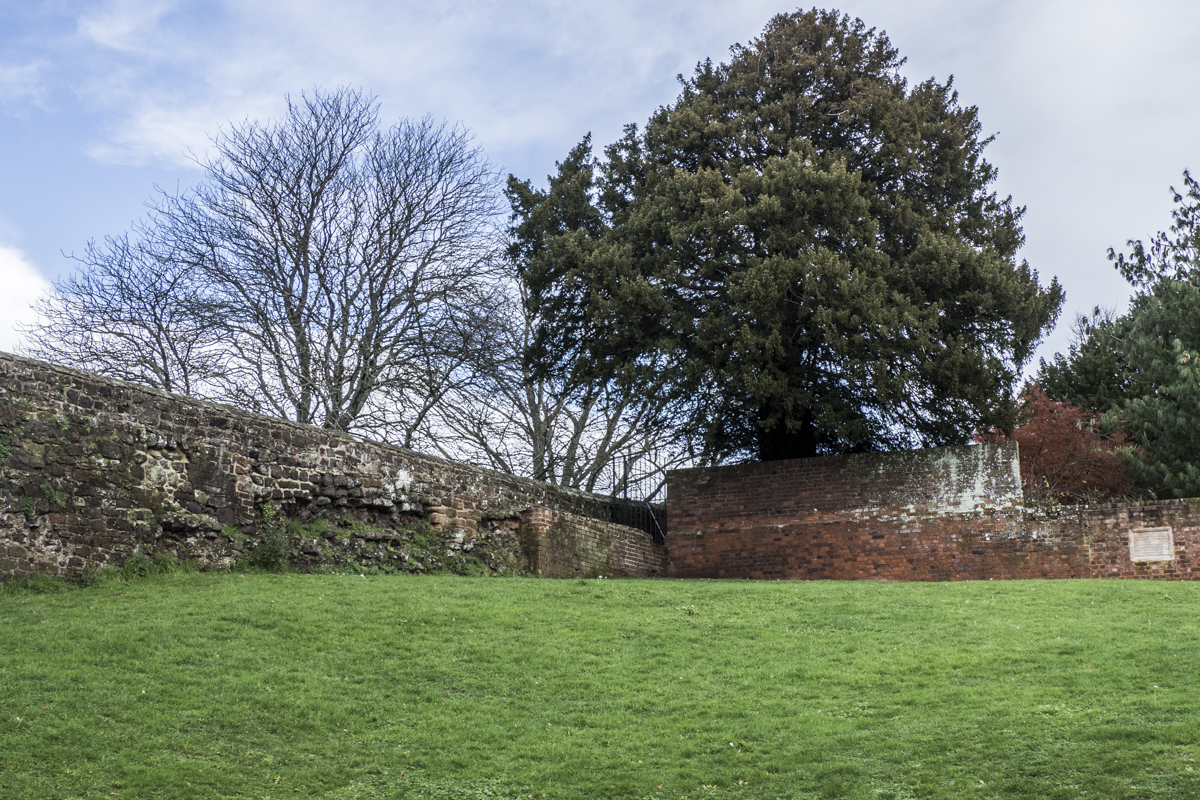 Northernhay Gardens in Exeter in Devon

I made my way back along the High Street to Northernhay Gardens. A stretch of the old City Walls forms one of the boundaries of these gardens. This site was a quarry for stone to build the city walls during Roman times. It became part of the defences of Exeter Castle in the Norman period. The remaining section of walls incorporates a stretch of Roman wall and the only tract of a Saxon town wall to be found in England. The gardens themselves have an interesting history. Initially laid out in 1612 they were destroyed during the English Civil War. New, large defensive ditches were created on this site thirty years later outside the city walls. After the Restoration in 1664 the park was re-instated. Hundreds of elm trees were planted and paths were laid out. It remains a popular amenity for residents and visitors. I went through a small archway in the walls to get a better view of the ruins of the castle from the Rougement Gardens within the old city walls. 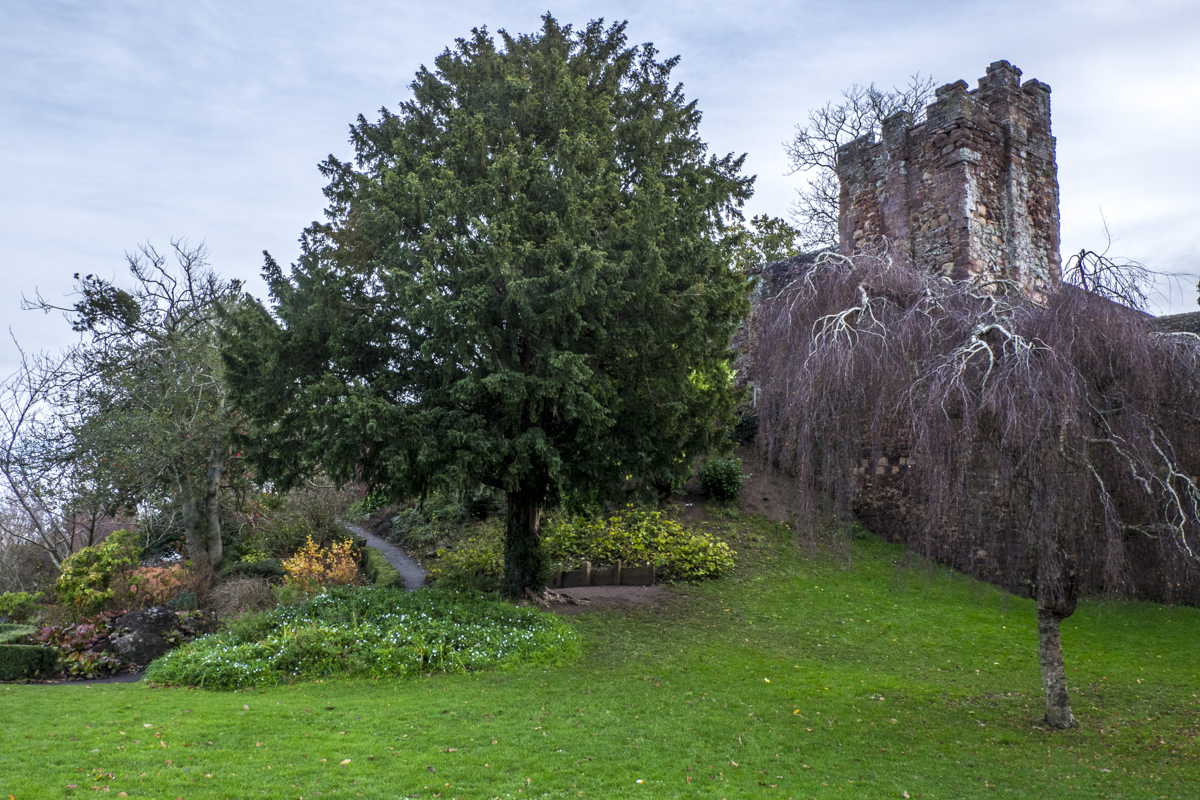 Rougement Gardens in Exeter in Devon

Rougement Gardens are Grade II listed in the National Register of Historic Parks and Gardens. Originally this area was created as part of the defences of Exeter Castle whose ruins still loom above them. During the late eighteenth century they were converted into gardens. The gardens were bought by the city council in 1912 and incorporate part of the Roman city wall and ditches of the castle built by William the Conqueror. I followed a path up to the top of the wall. From here I had a lovely view of tNorthernhay Gardens below me and the city of Exeter that now stretches way beyond its ancient city walls. There is very little left of the old castle, a monument to the early days of Exeter once one of the most important cities in England. 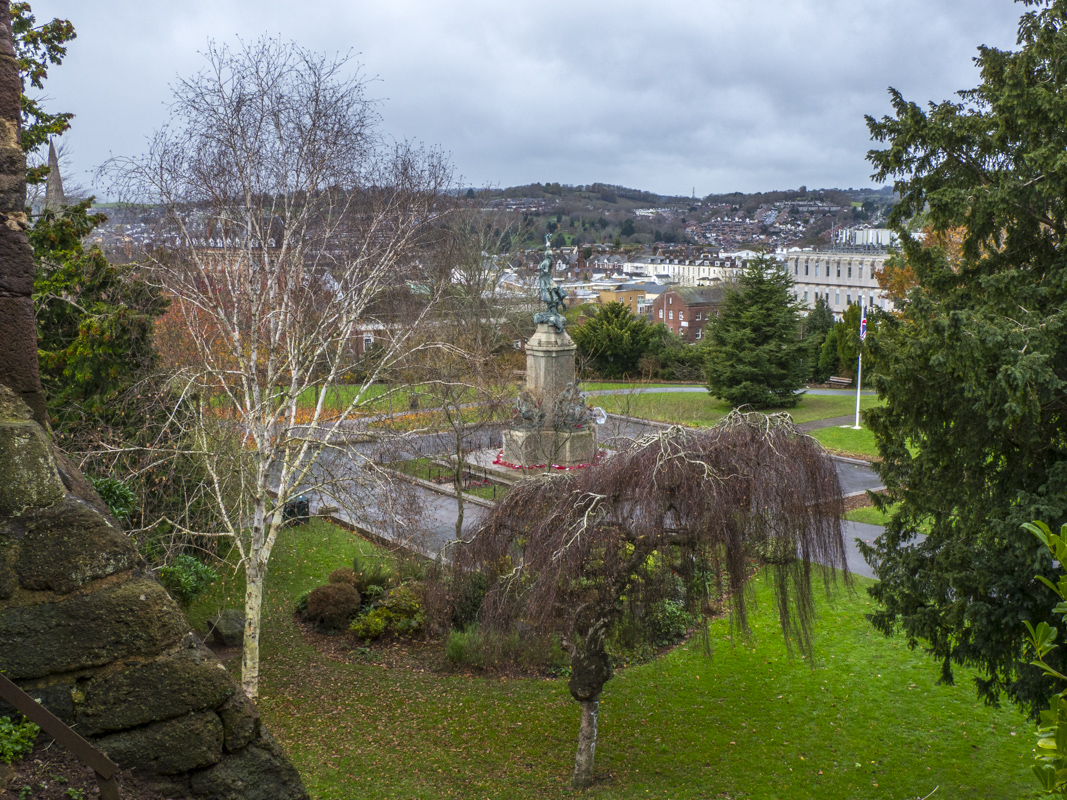 The Castle in Exeter in Devon

Exeter Castle stands on the site of an old Roman Legionary Fortress. It later became part of the Saxon fortifications. When the Normans conquered England they built a castle here, on the highest point of the city. It was not to defend the city but to dominate it due to its defiance during the Norman Conquest. It became known as Rougemont Castle because of the reddish colour of the volcanic rock around it. During the English Civil War, it was taken by the Royalists and then captured by the Roundheads so it has seen some action in its time. Walking back through the gardens I found a path that led into the back garden of the Royal Albert Memorial Museum (RAMM). This small garden is also bounded by a section of the original Roman walls. I went inside RAMM to discover more about the history of Exeter. 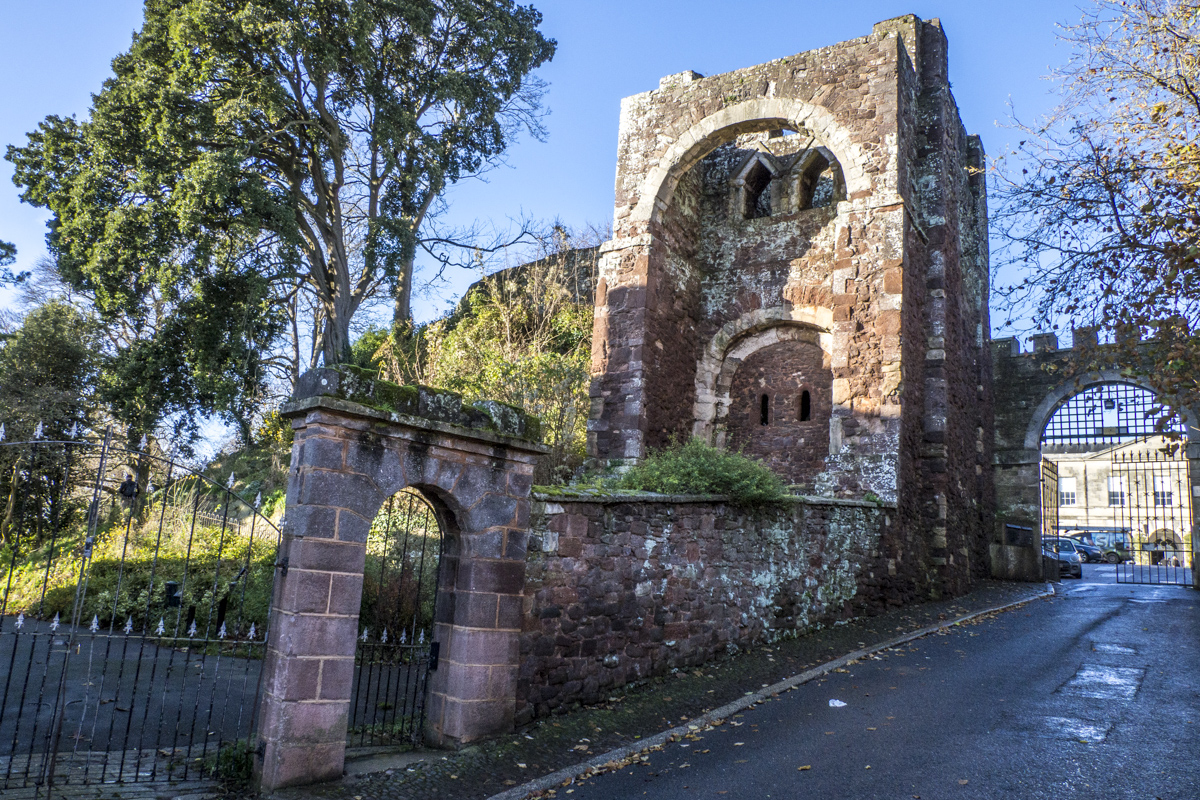 The Royal Albert Memorial Museum in Exeter in Devon

Housed in a magnificent Victorian building the award-winning Royal Albert Memorial Museum boasts sixteen galleries with displays representing the history of Exeter from the pre-history period to the present day. It also takes its visitors on a journey around the world. Three special exhibition spaces stage a changing programme of diverse themes. The permanent galleries are free to enter but a fee may be charged for some of the temporary exhibitions. This amazing museum will delight visitors of all ages and as it includes a café and a shop it would be easy to spend a whole day there. 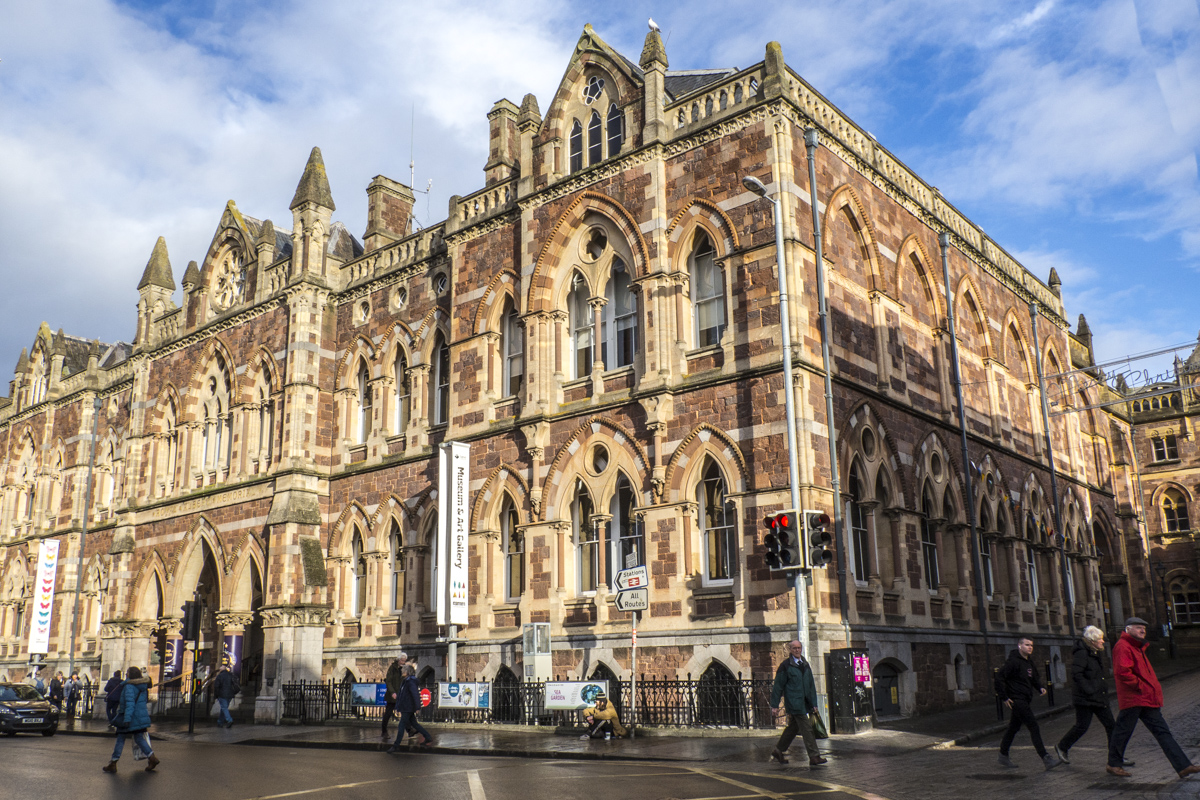 The galleries in the museum are very well laid out making it easy to enjoy the artefacts on display. Only one per cent of the museum’s total collection is on display at any one time. Ideas for temporary exhibitions originate from items in this collection supplemented by other exhibits on loan. I learnt a lot more about the history of Exeter as I strolled through the different galleries. RAMM also offers a very interesting and comprehensive programme of events including digital creative workshops. I could have spent the rest of the day there enjoying the various displays that included a gallery about insects featuring some fabulous butterflies as well as a giraffe, an elephant and other exotic animals. But it was time to move and find the cathedral where the original underground passages ended. 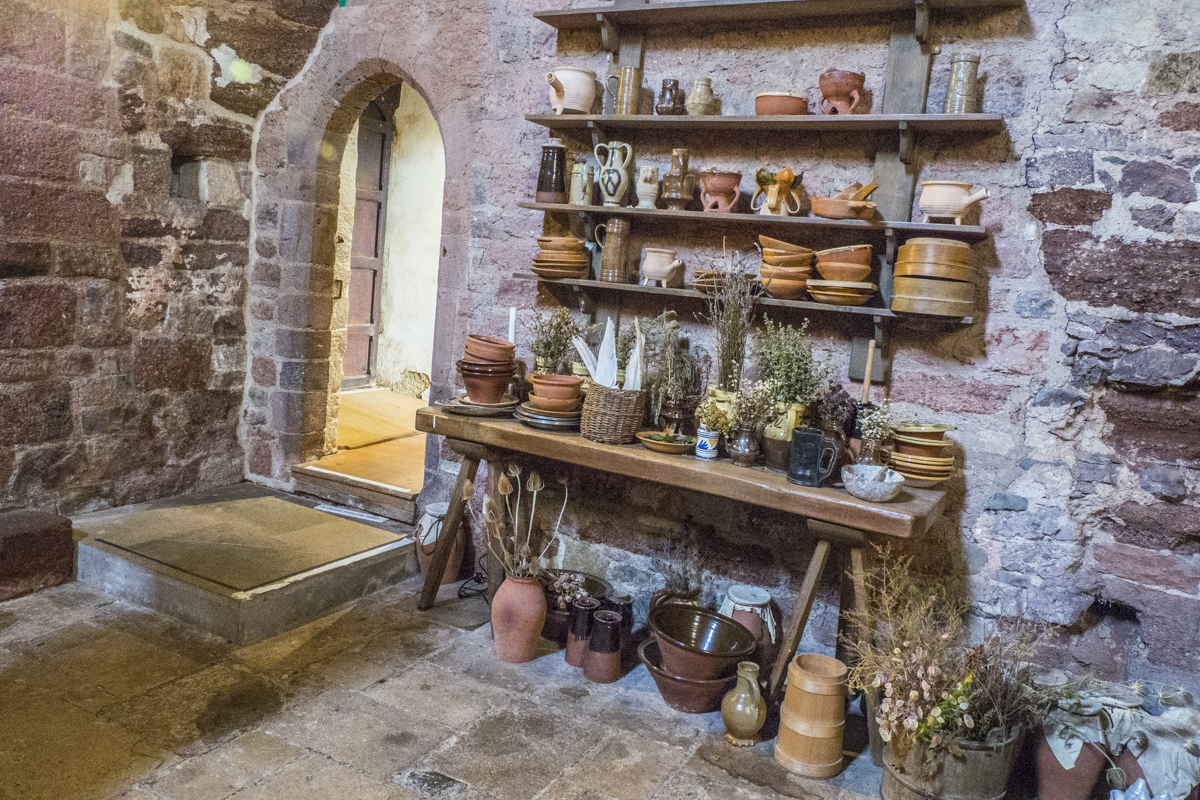 The Cathedral in Exeter in Devon

Exeter Cathedral is a fine example of decorated Gothic architecture and one of the most beautiful medieval cathedrals in England. Built in … it most famous for its two Norman towers and impressive west front carvings. The Cathedral Green https://www.exeter-cathedral.org.uk/venue-hire/cathedral-green/ in front of the cathedral a hub of the city and stages events throughout the year depending on the season. 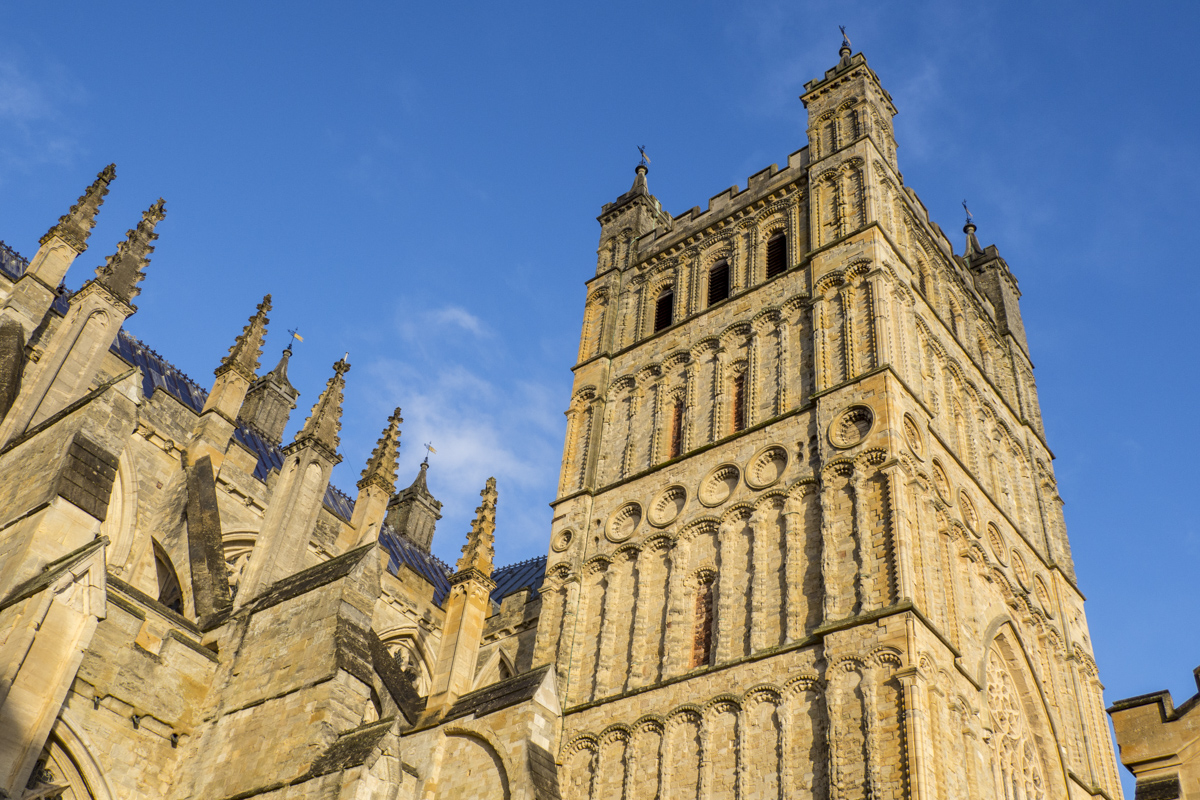 Worthy of note inside the cathedral are the Minstrels’ Gallery and the fifteenth century Astronomical Clock. It is known that there has been a clock in the cathedral since 1284, the earliest to have been recorded in England. This first clock was probably a water clock that works on the same principle as a sand hour glass. It is said that in 1484 Bishop Courtenay gave the cathedral a new clock and the clock face on the north wall. In the centre of the dial of the Astronomical Clock is a globe representing the earth. The moon revolves around it turning on its axis to show the phases of the moon. The fleur-de-lys represents the sun revolving around the earth in twenty-four hours and points to the hour on the outer circle.
Inside the cathedral is the longest unbroken stretch of Gothic vaulting in the world. 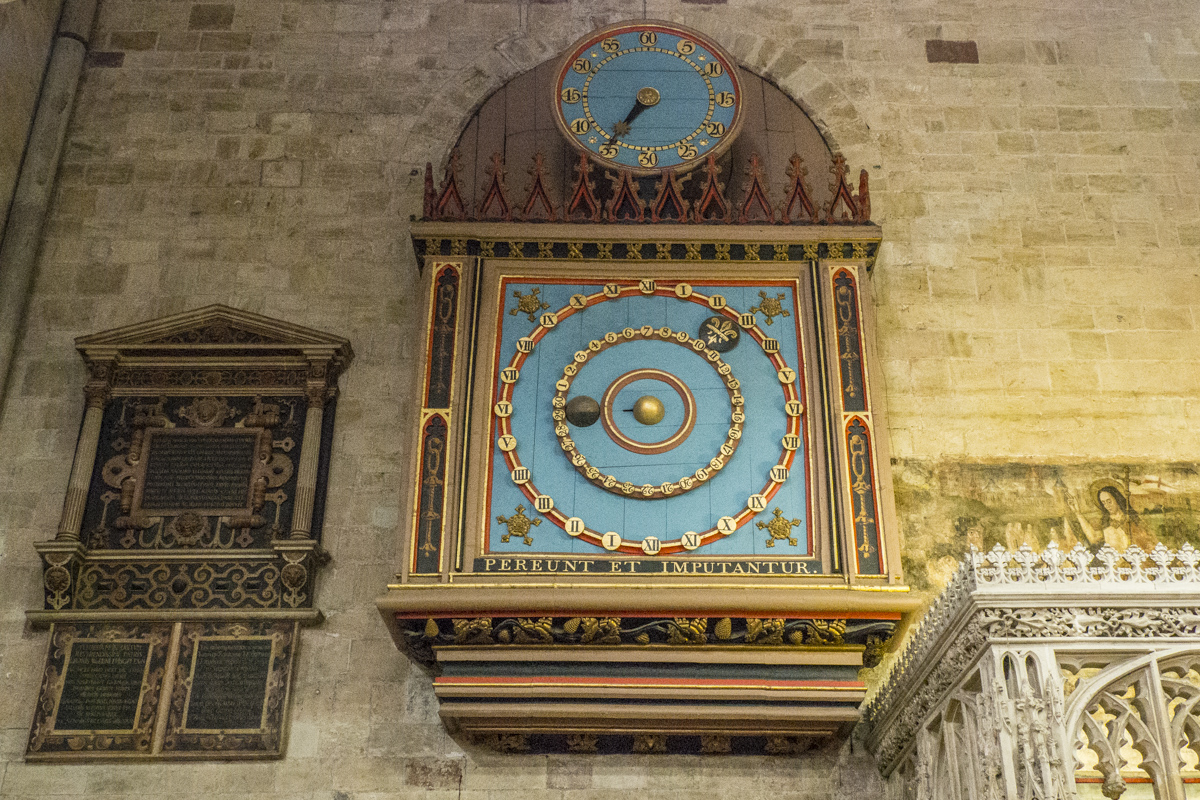 Most impressive inside this cathedral is and the longest unbroken stretch of Gothic vaulting in the world. It is truly amazing. A tradition of this cathedral, one that goes back nearly nine hundred years is the singing of evensong by the cathedral choir at 17:30 most weekdays. I wished I had time to stay and listen but it was time to move on. I did not even have time to stop for tea and a home-made cake in the cathedral café, very tempting though it was. My next stop was St Nicholas Priory also a recipient of water piped through the underground passages. 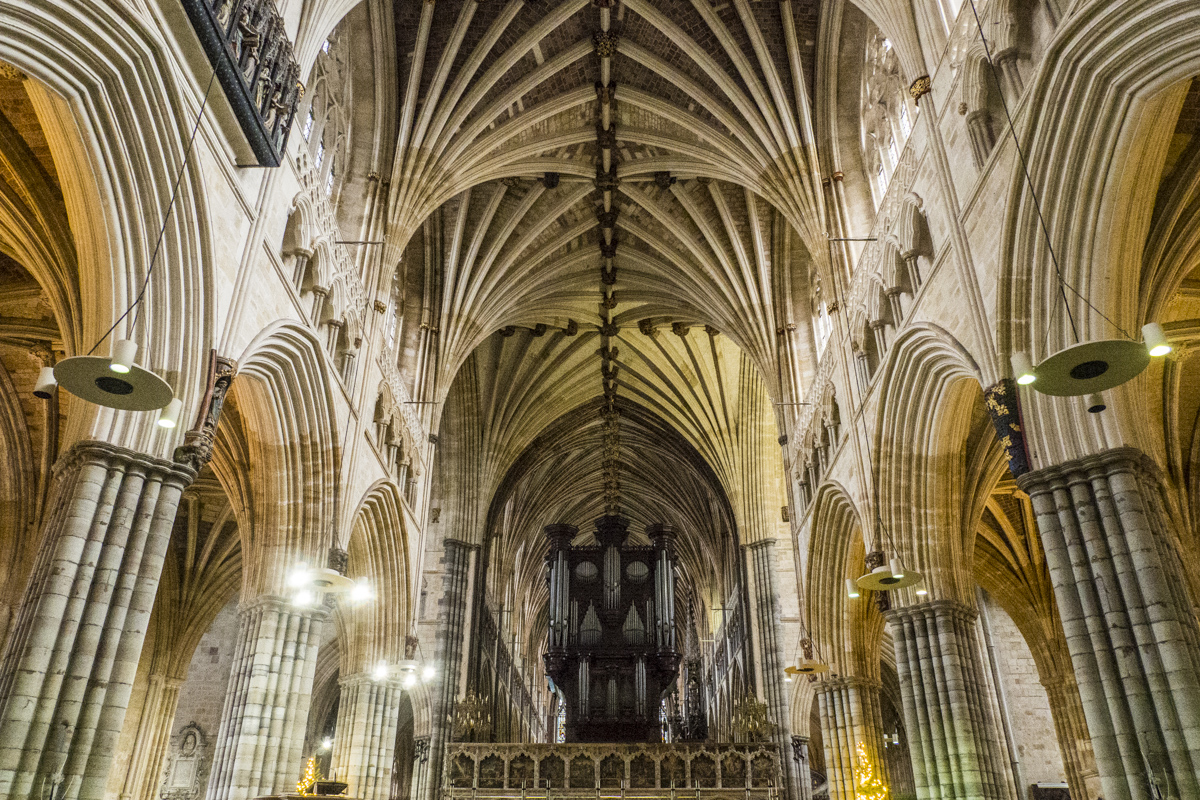 St Nicholas Priory is the oldest building in Exeter. It was founded by William the Conqueror in 1087 but dissolved and partly destroyed during the dissolution of the monasteries in the reign of Henry VIII. After that it became the town house of a wealthy merchant. Thereafter, for many years it was used as a residence until the city council rescued the building and converted the West wing into a living museum. 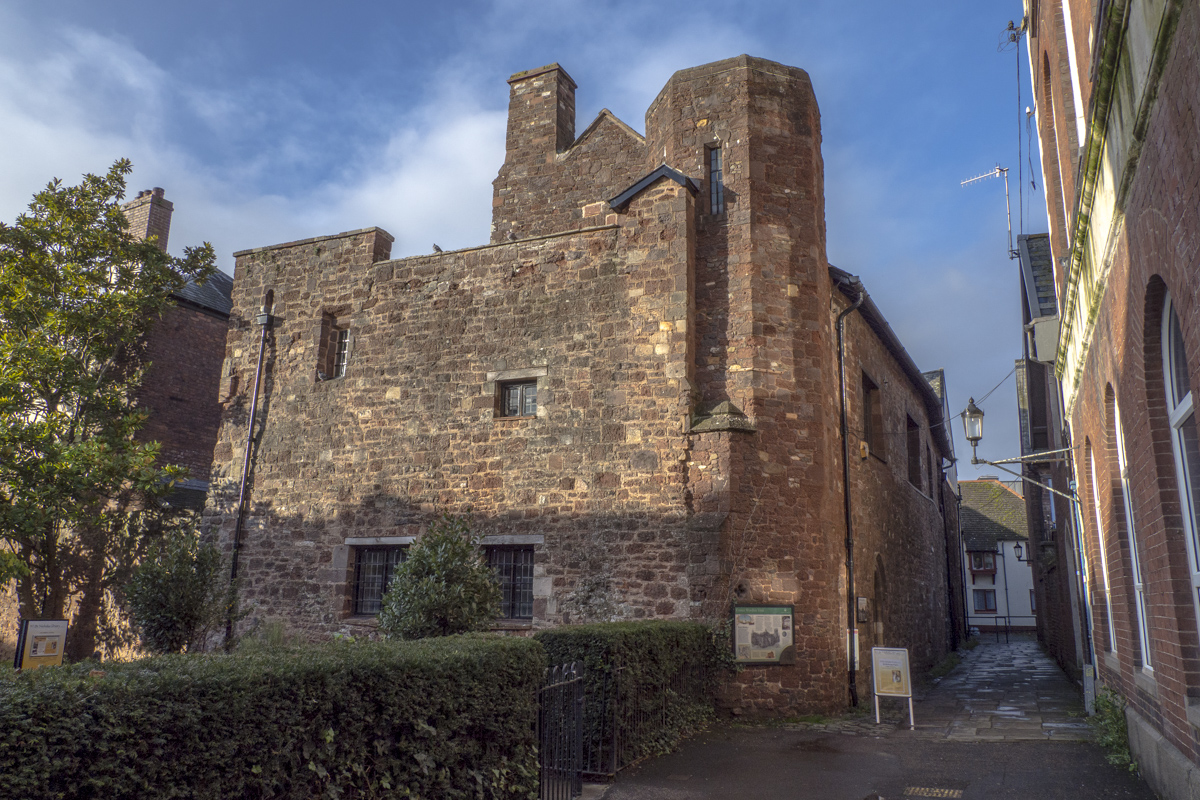 Visitors can now stroll through the Undercroft, Tudor Parlour, medieval kitchen, Great Hall and Tudor bed chamber in the West Wing. All these rooms have been restored to how they would have looked in the days of the priory. Following the restoration of the meeting room in the North Wing during the 1990s its fifteenth century arch-braced timber roof is a real highlight of a visit here. The priory now comes under the auspices of the Exeter Historic Buildings Trust and is used as a venue for public and private events. As dusk was falling by the time I finished my tour of the priory my thoughts were turning to the cosy lounge and open fire at my hotel. 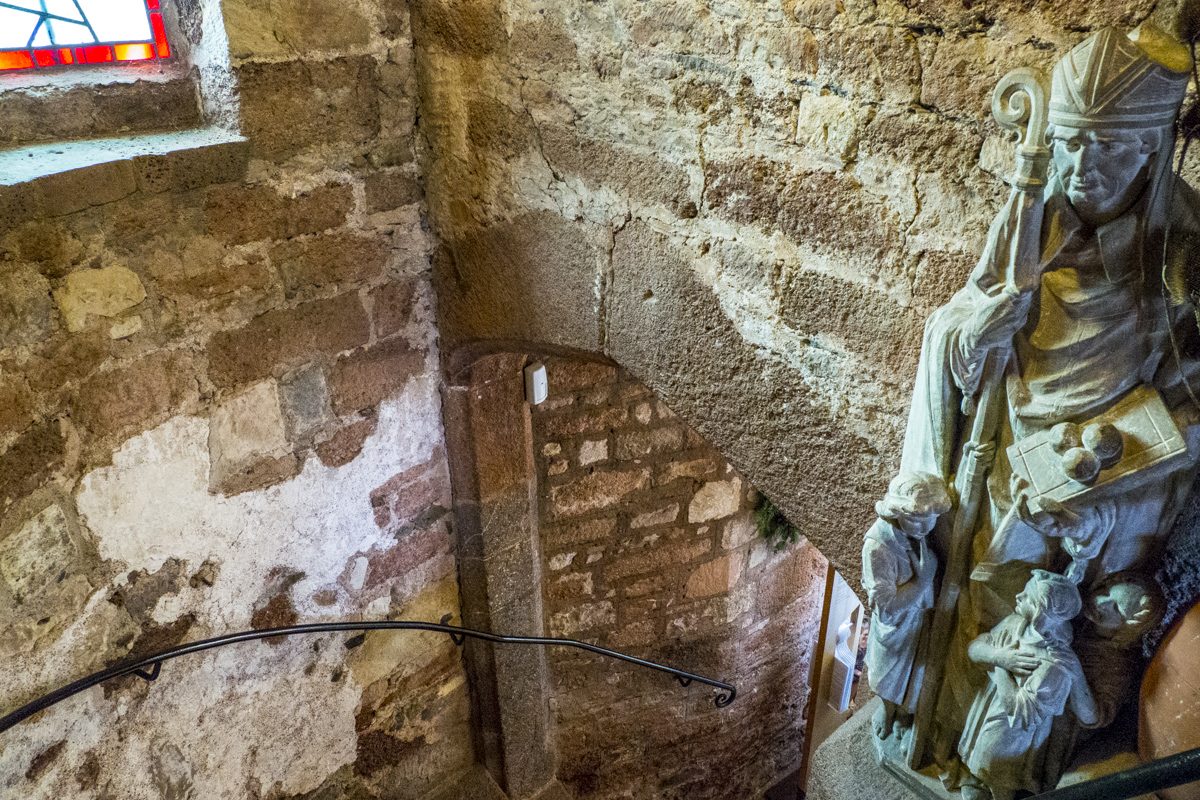 Where to Stay When Visiting Exeter in Devon

Where to Stay when Visiting Exeter in Devon

Paschoe House near Crediton is not just somewhere to stay, it is a whole experience. This grand old country house has been tastefully and beautifully refurbished. Enjoy a leisurely coffee in the elegant lounge warmed by an open fire. Treat yourself to a spectacular tasting menu with wine flight in the sophisticated restaurant. Stroll through the grounds and visit the charming walled garden. Friendly, efficient staff will cater for your every need to ensure you will have a memorable time in this unique country retreat just a few miles down country lanes from Crediton town centre. 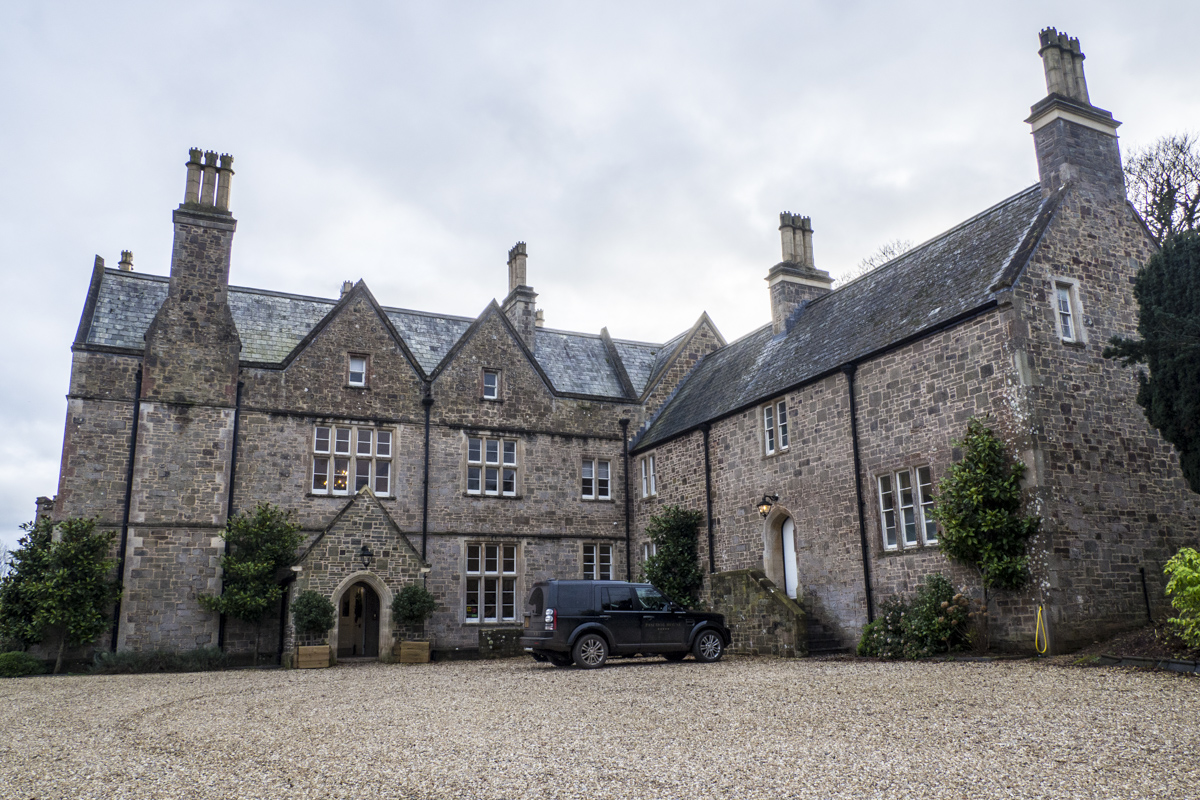 Getting to Exeter in Devon

Thanks to excellent road, rail and air links Exeter is accessible to the rest of the UK. By road it is just off the M5. Main-line stations are located a Tiverton, Honiton and Exeter and companies operating in the area are Great Western Railway, South Western Railway and Cross Country Trains The website, traveldevon has information on getting around Exeter and Devon by public transport including Park and Ride services.