Beside the Seaside Italian Style in Viareggio, Tuscany

Viareggio is a resort in Versilia on the Tuscan Riviera. It stretches for three kilometres along a beautiful, natural sandy beach. Precise rows of coloured umbrellas, each shading two sunbeds on either side of a small table surge towards the gently lapping waves of the Tyrrhenian Sea. It is a sight to savour.

Visitors from the nearby towns of Florence, Lucca and Prato began to flock here with the arrival of the railway in 1891. The wide open spaces around the town and the twenty-kilometres of natural beaches were a welcome relief from the busy city streets. Today this lovely resort attracts visitors from all over the world. But it is not simply a seaside resort as Viareggio is a large, thriving town. Its railway station is located on one side of the old town and its long promenade is located on the other. Between the two is a grid of narrow streets many of which lead into Piazza Cavour where its historic daily market takes place. Stalls surround the large, old building that dominates this square and some lurk under its loggia. Continuing towards the sea front visitors will emerge on the wide promenade known as La Passeggiata Margherita. 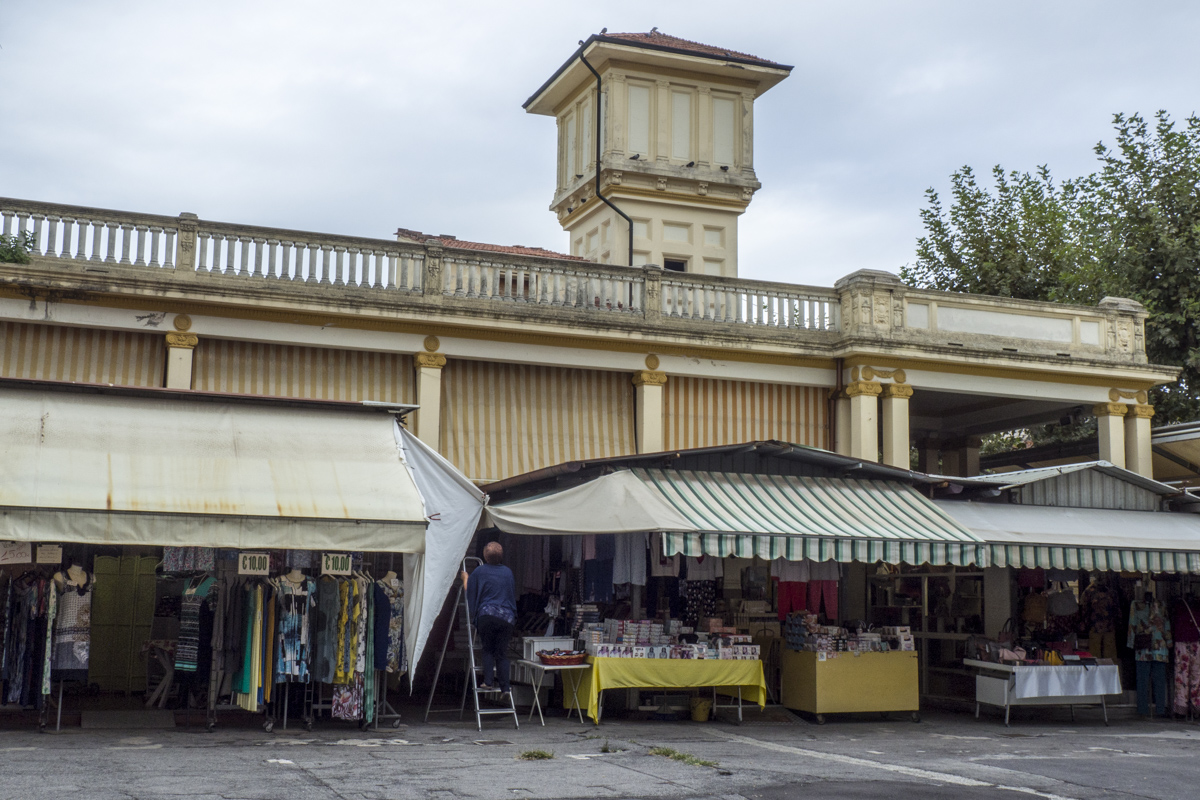 The Permanent Market in Piazza Cavour in Viareggio in Tuscany, Italy

This wide promenade is punctuated with small flower beds, trees and stone benches decorated by a variety of artists. It starts by the Burlamacca Canal which separates the town from its port and docks. The original promenade was largely destroyed by a disastrous fire in 1917. A new promenade was built featuring buildings in the style of that era, Art Nouveau. Just one of the original wooden buildings remains, Chalet Martini. Built in 1899 the chalet features a series of lowered arches which creates an arabesque appearance. It is worth going inside the shop that now occupies this building to see the art deco style decoration in white maple with mother of pearl. Enthusiasts of Art Nouveau can take a guided tour and self-guided tour leaflets are available from the tourist information offices. 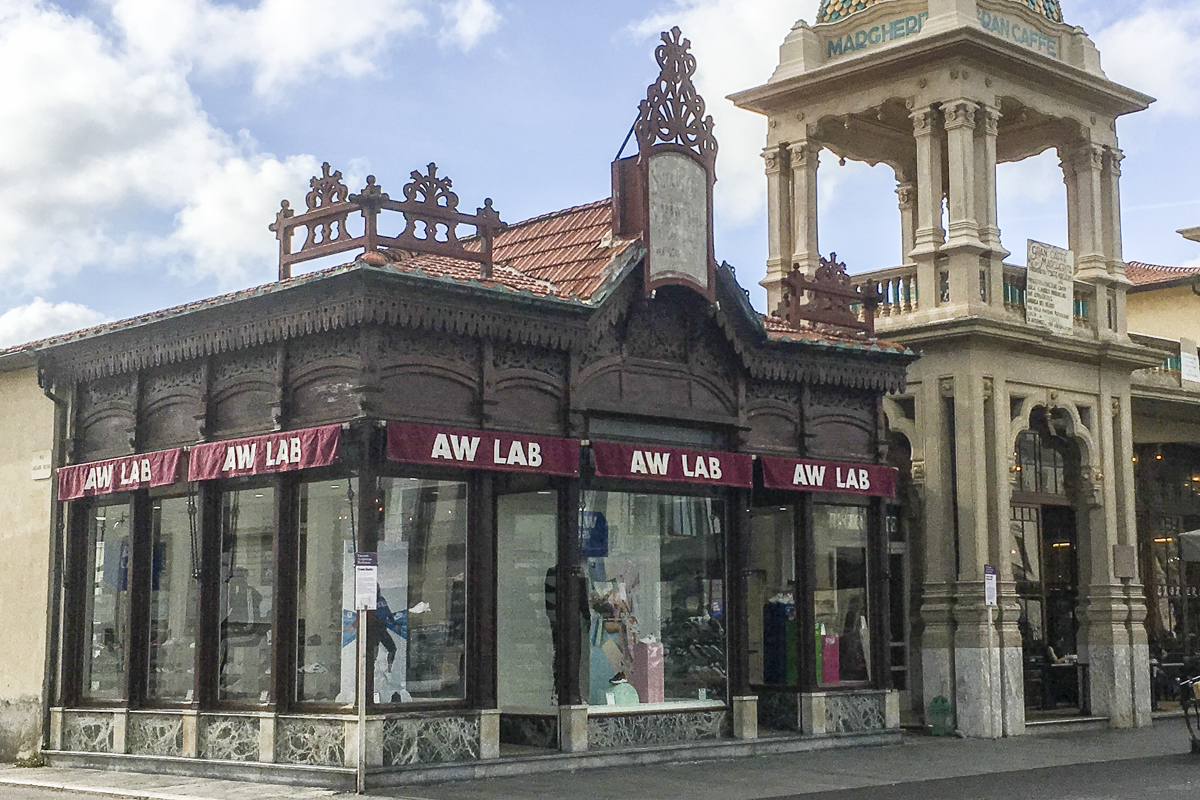 The Port of Viareggio

Viareggio originated as a fishing village during the twelfth century. Today the port and docks of Viareggio are dedicated to the building and fitting out of ocean-going yachts some of which can be seen in its marina, one of the largest in the Mediterranean. Fishermen still go out to sea every day and on their return they sell their catch along the banks of the canal. It is here that the fish and chip boat plies its trade and by lunchtime large queues will be waiting for it by the bridge over the canal. Standing to attention amongst the modern buildings around the first little harbour built in 1820 is the sixteenth century Tower Matilde. The oldest building in the city it was built to protect the city from pirate attacks. Today it is the venue for many art and cultural exhibitions. The Maritime Museum on the town side of the canal is housed in an historic building where the fish market used to be held. It tells the story, through thousands of artefacts, of the development of the port and ship-building industry. 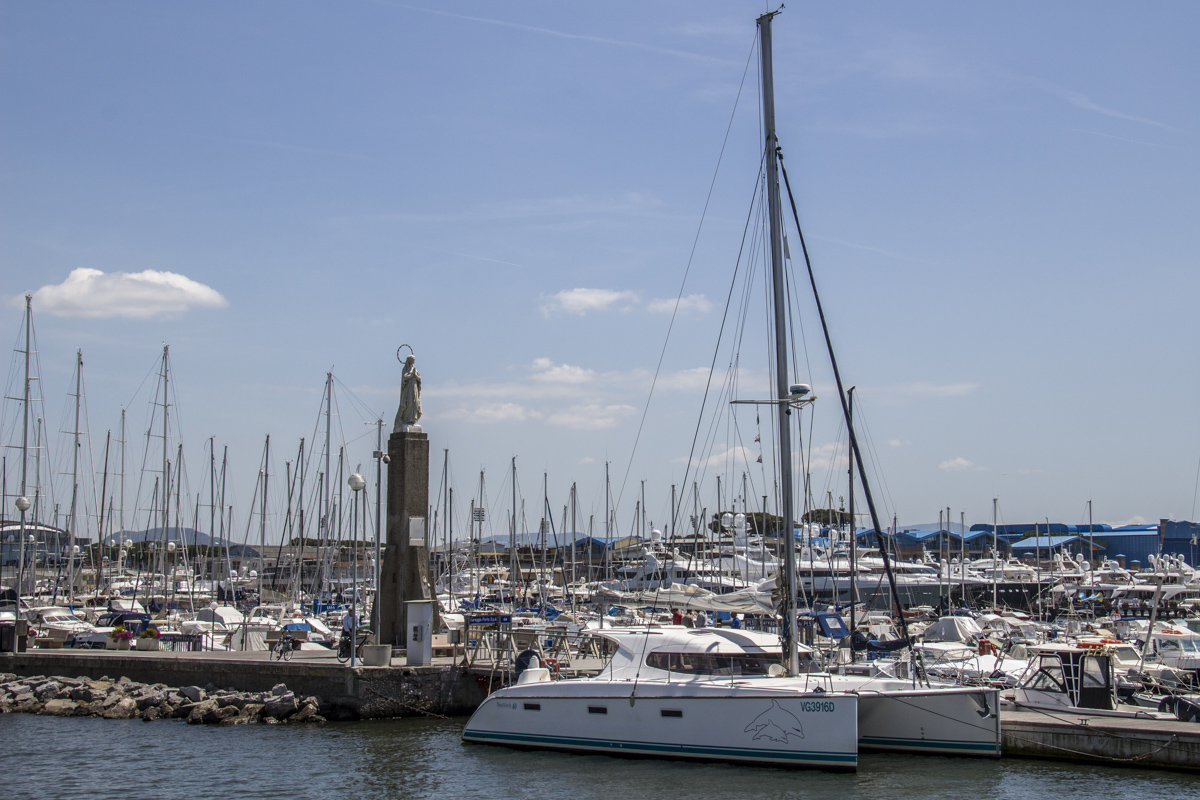 The Marina at Viareggio in Tuscany, Italy

A short distance along the sea wall on the town side of the Burlamacca Canal the sculpture L’Attesa pays homage to the origins of the town. This very emotive bronze art work was re-created by Gionata Francesconi from an original, much smaller wooden sculpture created by a local artist Inaco Biancalana in1947. It represents the family of a seafarer anxiously awaiting his return. It was placed here in 2007. 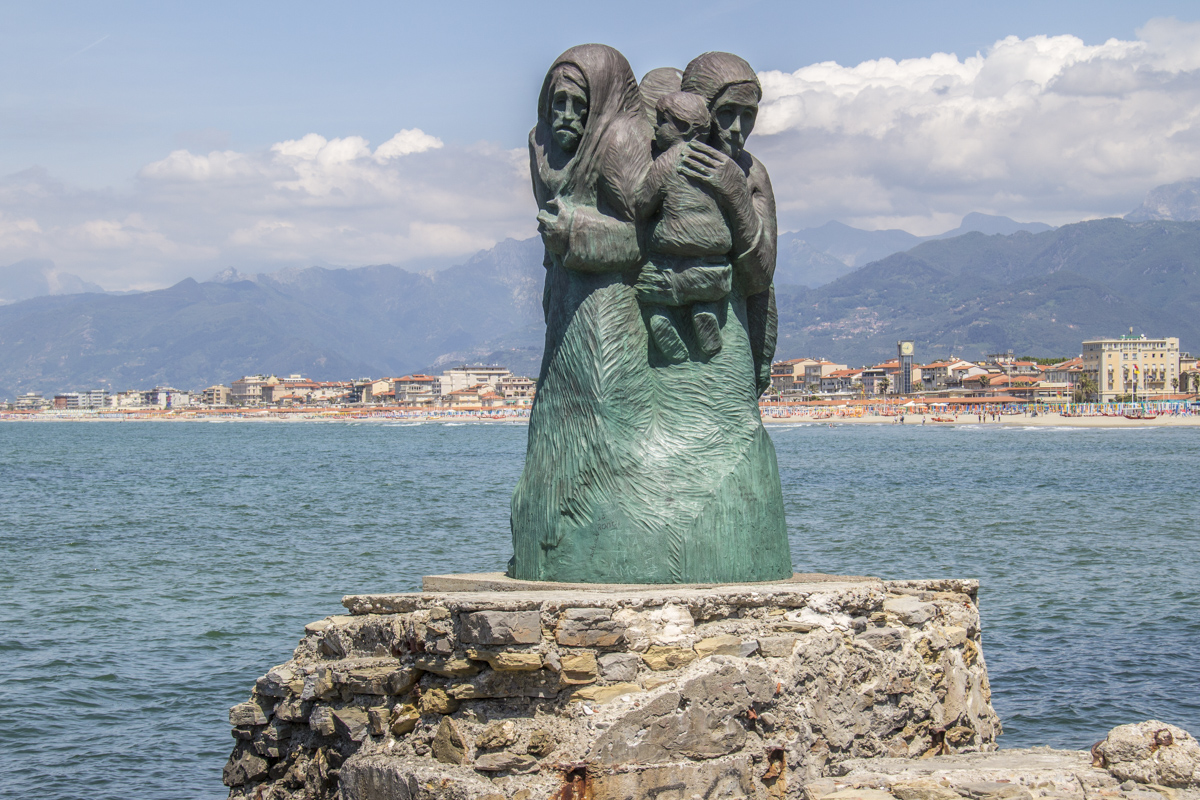 L’Attesa on the Sea Front of Viareggio in Tuscany, Italy

The Bathing Establishments of Viareggio

From the relatively small public beach beside the marina to the area known as the Citadelle no less than ninety-two bathing establishments are accessed from the narrow street that runs parallel to the sea. At first sight the visitor would assume that this forms a barrier between them and the sea beyond. However, all the establishments have a café or restaurant within its boundaries and generally anyone is welcome to take refreshments there. Long boardwalks lead to the water’s edge and the chance to stroll along the beach. Use of the sun beds and showers is subject to a charge. 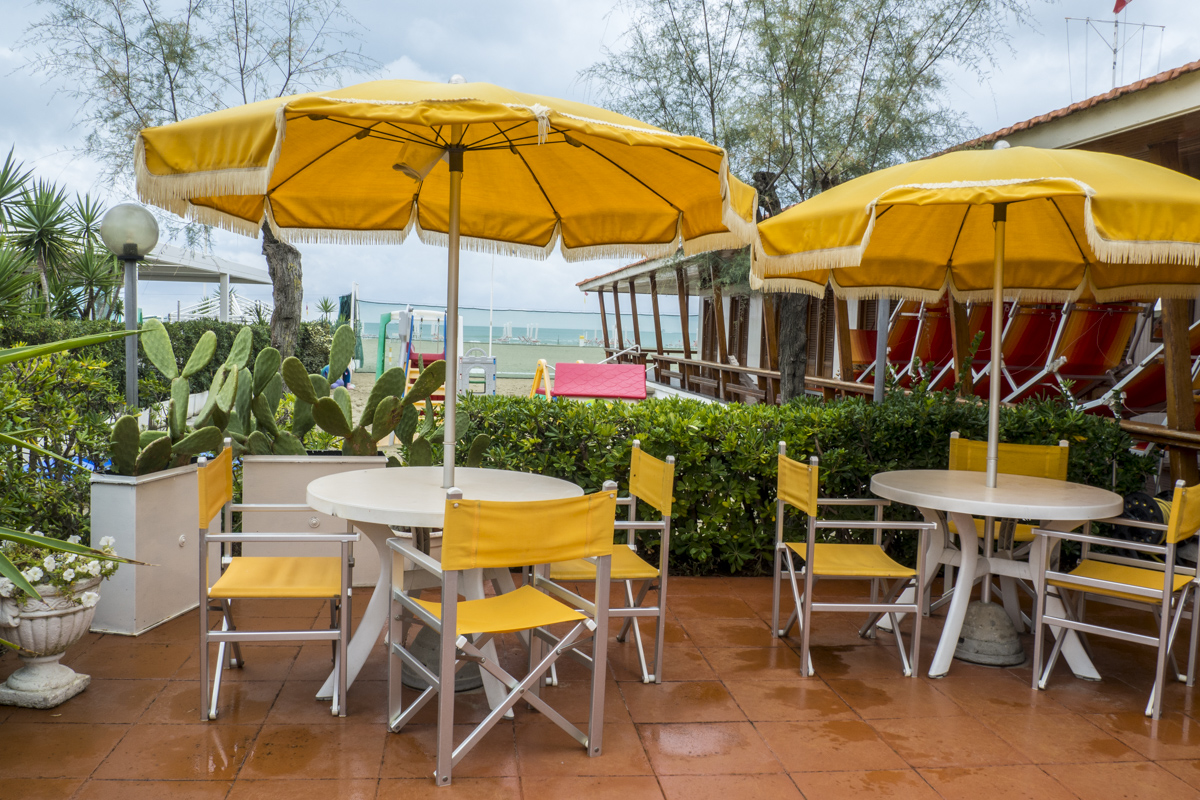 A few of the bathing establishments are still accessed through the old bath houses built in the 1920s and 1930s. The most famous of these is the Art Nouveau style Bagno Balena, named after the whale. Established in 1871 it is still operating today as a luxury bathing establishment. 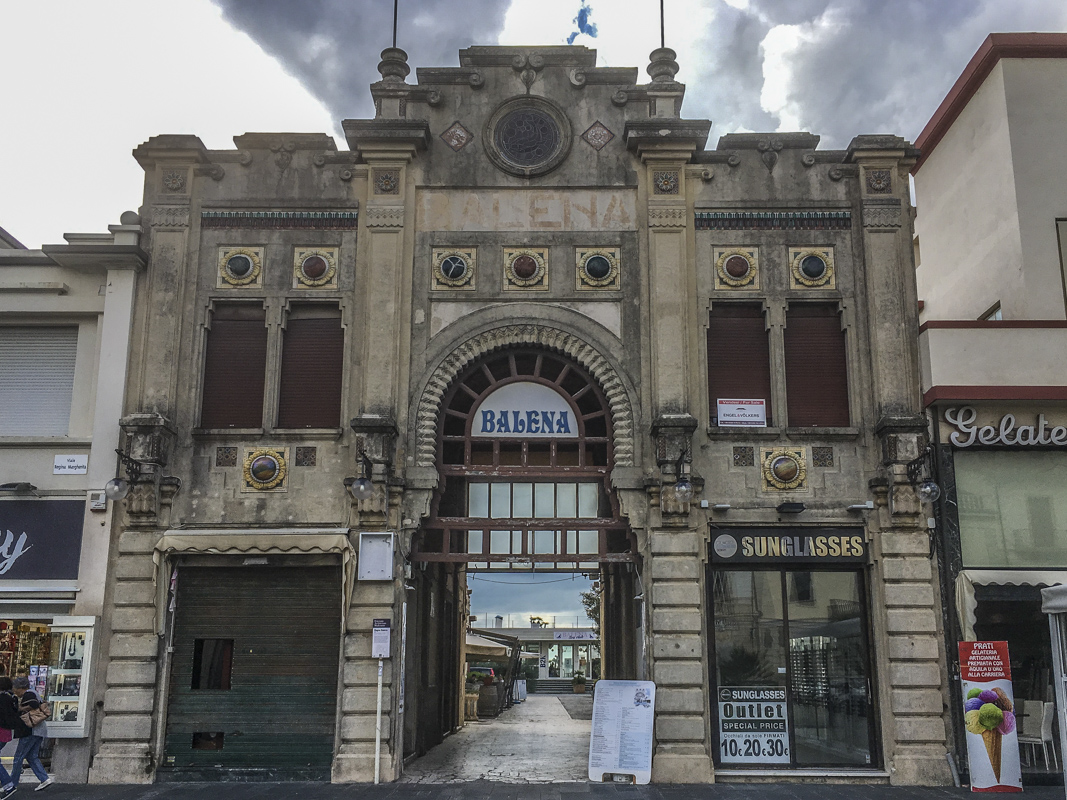 Most of the other old bath houses, for example, Bagno Martinelli http://www.libertyviareggio.it/il-percorso/27/bagno-martinelli.html built in 1928, now house shops and cafés that line one side of La Passeggiata Margherita. 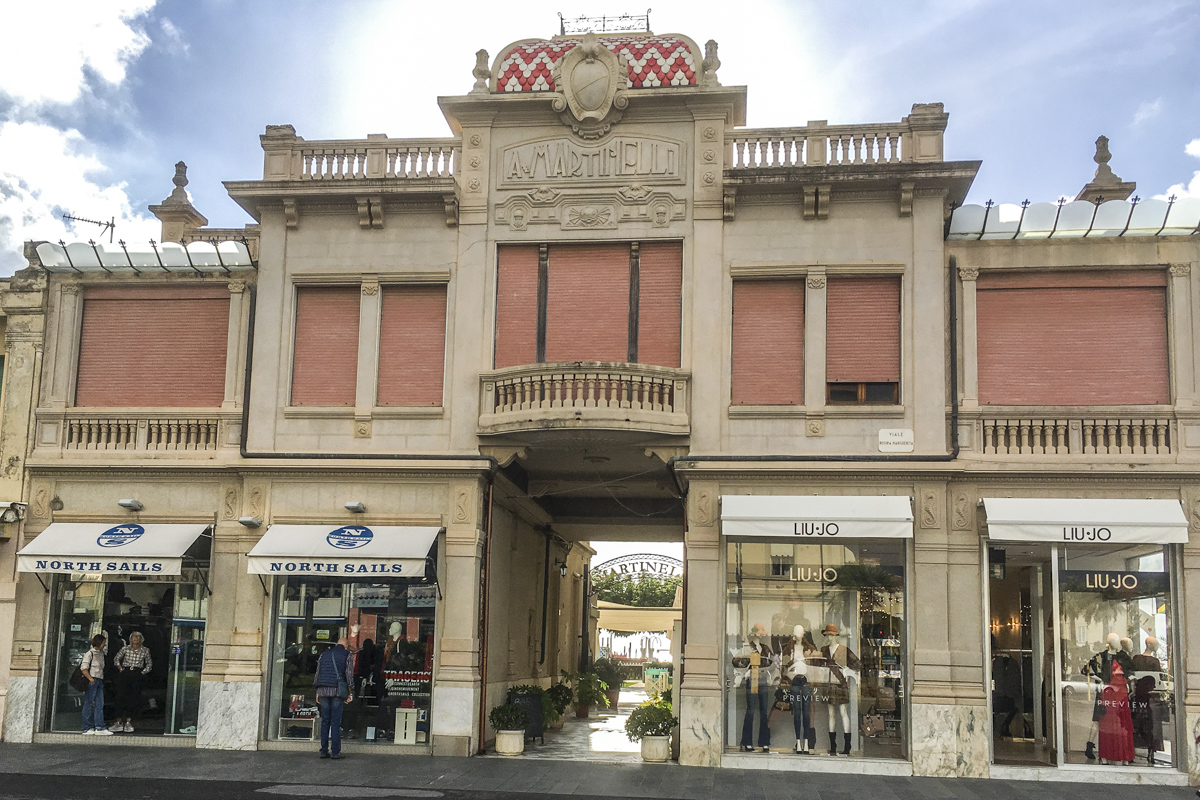 The most iconic and captivating building on the promenade is the popular Gran Cafè Margherita. Once a favourite haunt of the composer Giacomo Puccini and today it is, for many, a highlight of a visit to Viareggio. Puccini had a house near Viareggio, Villa Torre del Lago, where, it is said he liked to smoke and blaspheme with friends in a small building constructed especially for this purpose. After his death his villa was converted into a museum and is open to the public. On the opposite side of the promenade are the stunning grand hotels of Viareggio, some still operating as hotels but many now transformed into apartment blocks. 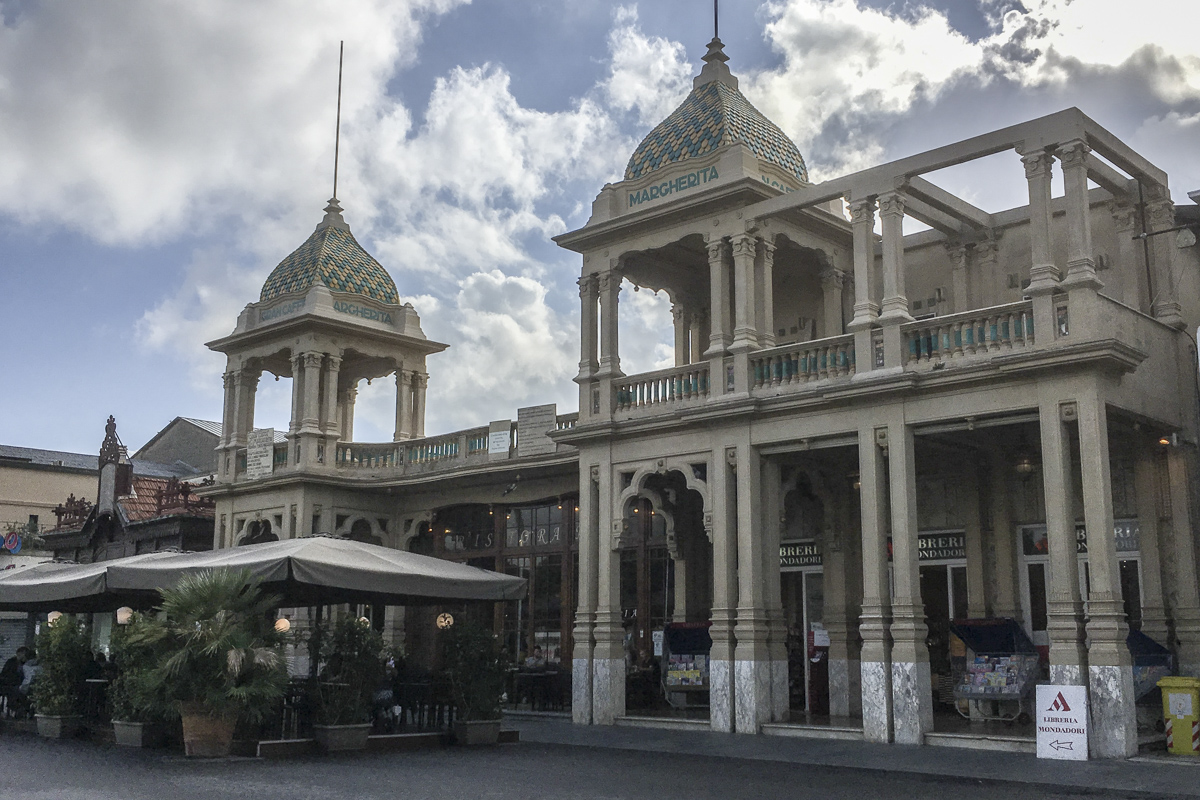 The Grand Hotels of Viareggio

The grand hotels along on the sea front of Viareggio are a throwback to another era. The Principe di Piemonte was founded in the early 1920s and named the Select Palace Hotel. Two more storeys were added in 1925 and the magnificent façade was added then. This grand hotel, renamed Grand Hotel Principe di Piemonte in 1938 has been always been a favourite of aristocrats, intellectuals and artists alike. It was restored to its original splendour in 2004 and now it is one of the world’s most historic and elegant hotels. Another impressive hotel is the Grand Hotel Royal standing proudly on the sea front. Behind this hotel are the pine gardens, Pineta di Ponente a parcel of nature in the city centre where adults can stroll and children can play. 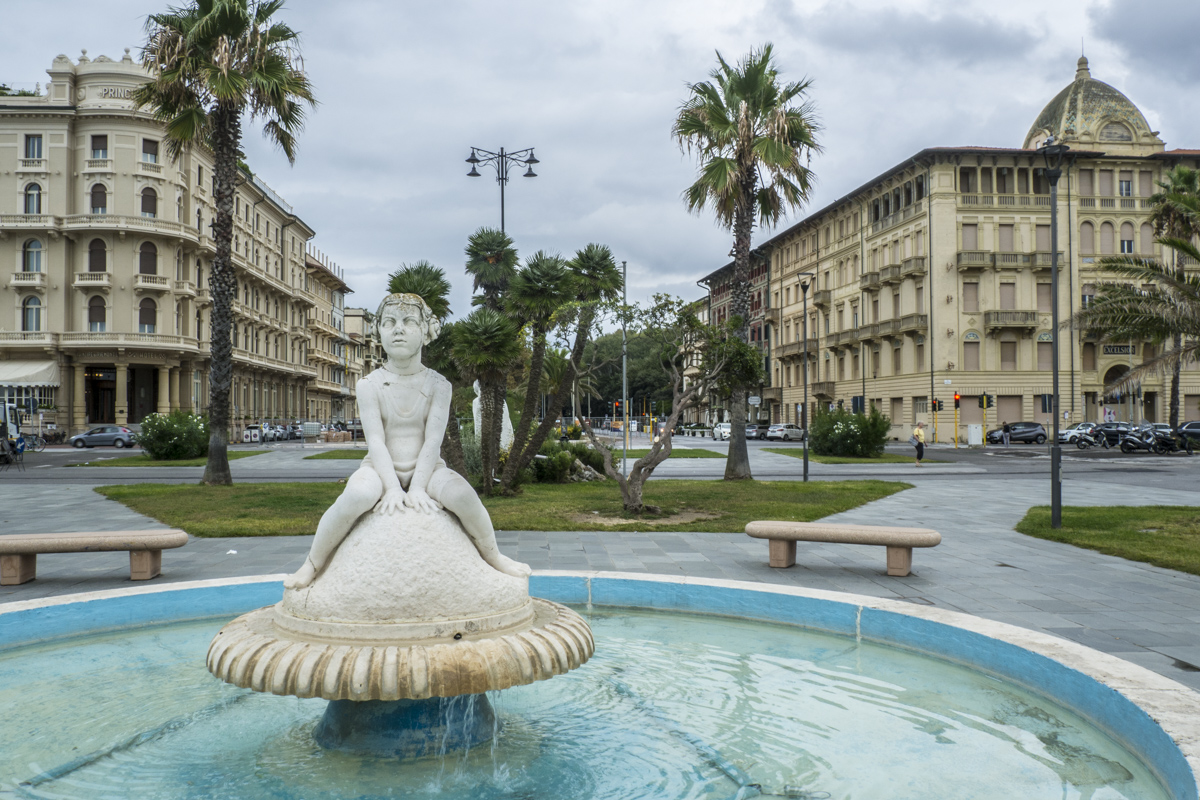 Grand Hotels behind the Fountain of the Four Seasons in Viareggio in Tuscany, Italy

The Museums of Viareggio

At the back of the Piazza Giuseppe Mazzini on the sea front housed in the nineteenth century Palazzo delle Muse is the Gallery of Modern and Contemporary Art. This gallery, dedicated to contemporary art, has a permanent collection of over three thousand works of art mostly from private collections. The most important collections feature the works of the Viareggio-born painter Lorenzo Viani. In the city itself the Civic Museums, Musei Civici di Villa Paolina are housed in another interesting building, Villa Paolina. This was once the home of Napoleon Bonaparte’s sister Paolina. 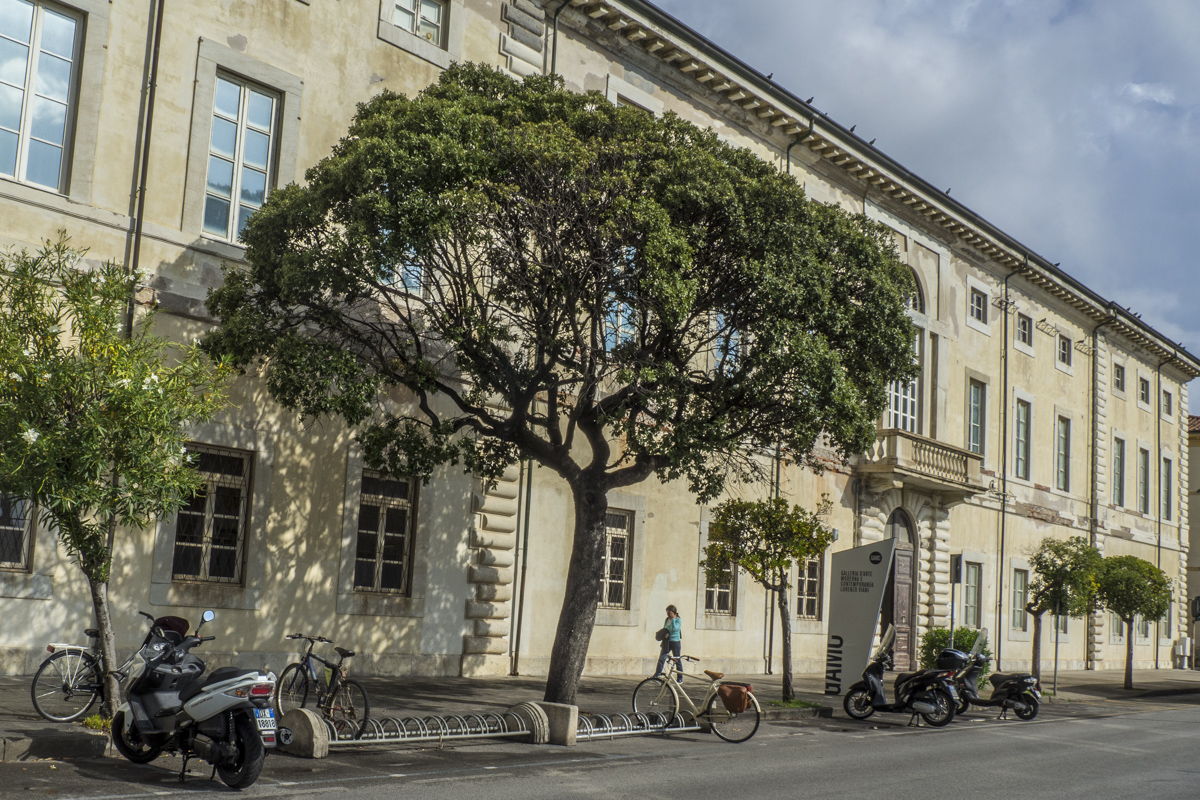 Strolling along the promenade one cannot fail to notice the Burlamacco, the symbol for the Viareggio Carnival. The annual Carnevale di Viareggio lasts for a month with five days of processions. These are held on four Sundays and one on Shrove Tuesday during the four weeks that precede Lent. Papier-mâché floats are the stars of this popular carnival and are inspired by Italian and international politics and often satirical. Some of these floats are on display at the Museum of the Carnival at the far end of the promenade. Viareggio also has some impressive religious buildings in the town itself. 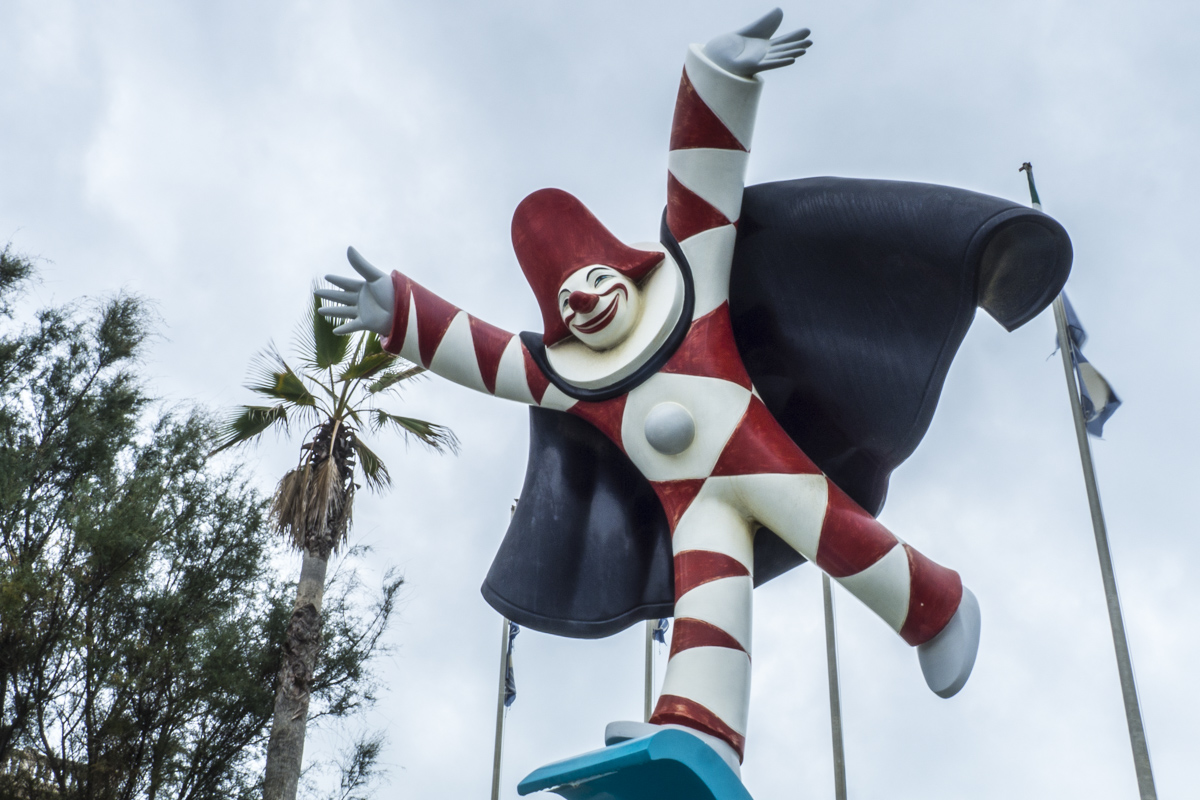 The Burlamacco the Symbol of the Viareggio Carnival in Tuscany, Italy

The Basilica of San Paolino in Viareggio

Between the sea front and the railway station is the imposing Basilica of San Paolino. Built in 1896 it was enlarged during the 1930s and 1940s to house an expanding population. The bell tower which was finished in 1921 was destroyed during the Second World war and then rebuilt in 1954. The interior replicates the layout of the early Christian basilicas with an apse, a triumphal arch and an apsidal basin decorated with a mosaic on a gold background. It was restored in 1990. 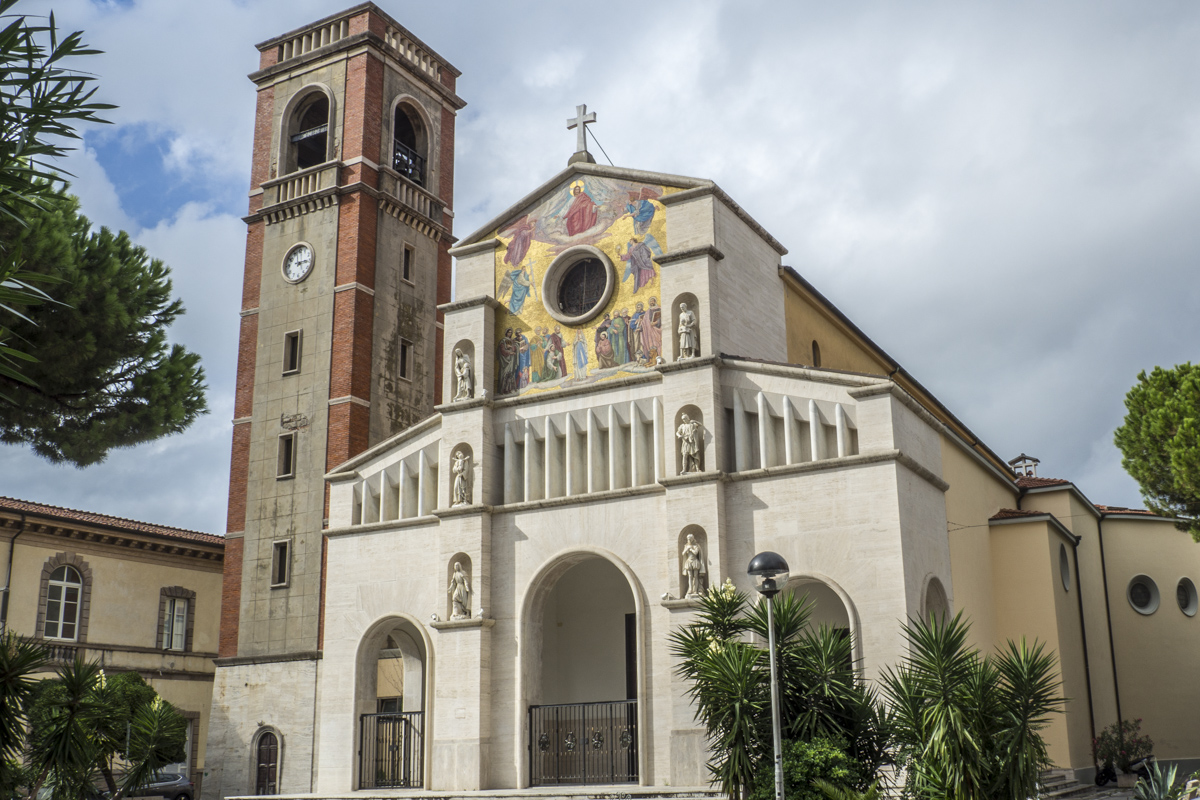 The Basilica of San Paolino in Viareggio in Tuscany, Italy

Where to Stay in Viareggio

Viareggio is still popular and pricey as far as accommodation is concerned. But as the town is easily accessible from many areas of Italy it is more economical to stay elsewhere and Tuscany has many lovely little towns. I stayed in Montecatini Terme at the Hotel Biondi which was comfortable and very convenient for the town centre and the train station.

How to get to Viareggio

Viareggio is connected with many large cities in Italy including Florence, Rome and Milan and all stations in between. Journeys are easily booked through the Trenitalia website on the main line from Florence to Viareggio.

This article is based on the personal experience of Valery, an ExperiencedTraveller who visited Viareggio on a trip organised by Solos Holidays.