Woodstock and Blenheim Palace a Perfect Pair for a Great Outing

It is believed the historic town of Woodstock in Oxfordshire was founded in 1279 by Henry II to provide housing for his retinue of servants during his frequent visits to his royal hunting lodge at Woodstock Manor.

Woodstock was also generally considered to have been the home of Henry II’s mistress Rosamund Clifford. The hunting lodge is long gone and Woodstock Castle was built on its site after it was demolished. This castle was destroyed during the English Civil War it was replaced by Blenheim Palace, built between 1705 and 1724. But the town continued to flourish. During the sixteenth century the town prospered due to its glove-making industry. During the eighteenth century it housed workers involved in the building of Blenheim Palace. Once the palace was completed tourists were attracted to the town and its coaching inns offered rest and refreshment to the travellers and the coach horses. Several of these coaching inns have been converted into hotels, one of them being The Bear Hotel, a thirteenth century coaching inn on Park Street. Also on Park Street is the parish church of Woodstock. 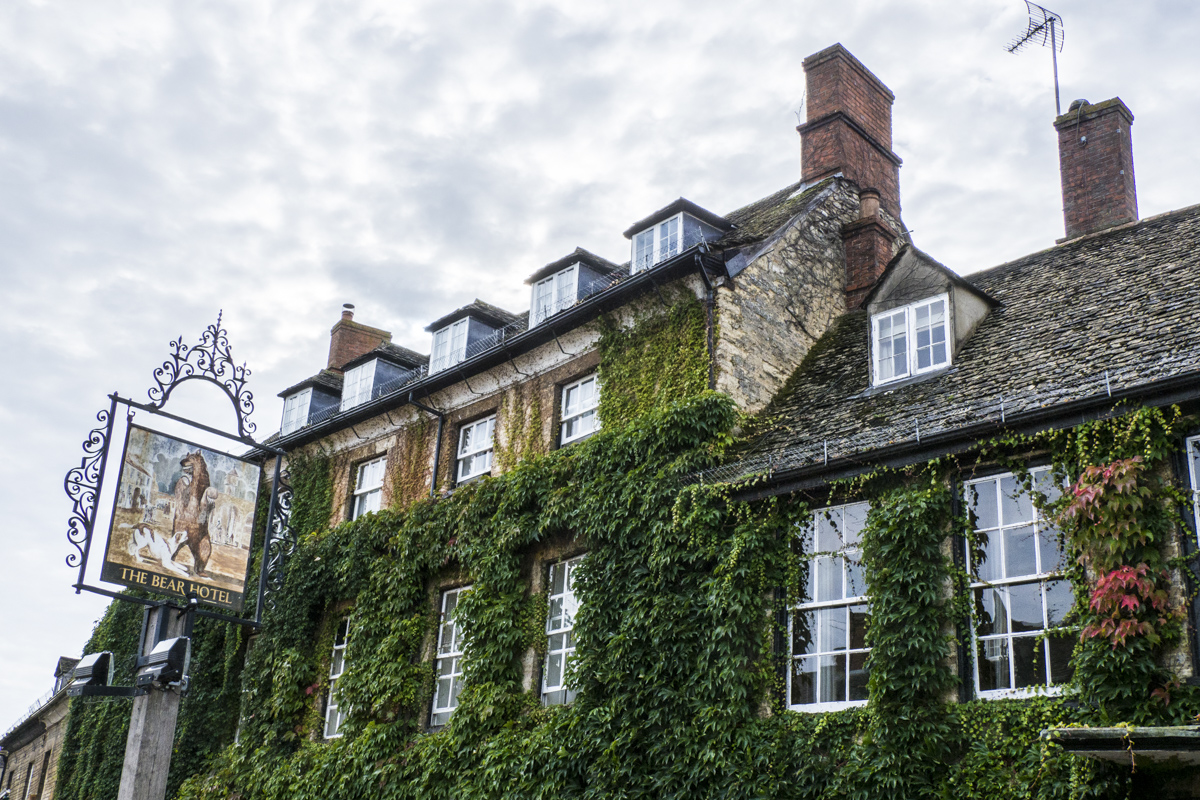 The Bear Hotel in Woodstock

The Parish Church of Woodstock

In 1172 King Henry II built the original St Mary Magdalene Church as a chapel of ease. He would come up from London on a Saturday and stay in the Royal Hunting Lodge in what was then The Royal Woodstock Hunting Park (now Blenheim). His chaplain insisted that before hunting on the Sunday he should attend a church service. The nearest church was in Bladon and as this took too long for the liking of the King he had a small church built just outside the gates of the Royal Park. Thus ensuring more time for hunting. This church is now the parish church of Woodstock. The church has been expanded since it was built including some major alterations by King Henry IV. A major refurbishment took place in 2019. Apart from the impressive interior of particular interest is the stone surround of the Norman door which is nearly 850 years old. 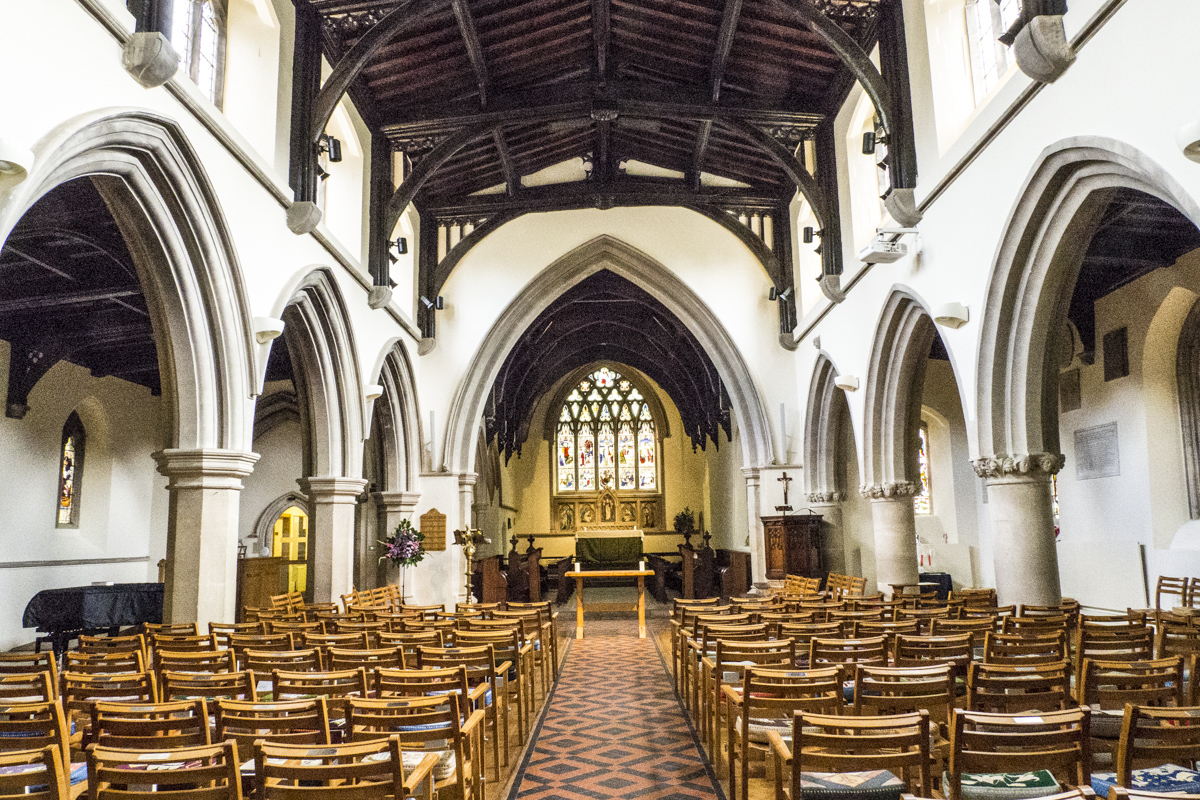 The Museums of Woodstock

Woodstock has two museums. The Oxfordshire Museum on Park Street is partly housed in Fletcher’s House. The museum features several galleries with permanent and temporary exhibitions including the Coach House Education Centre, a dinosaur garden and an interactive dinosaur gallery. It also has a gift shop, a coffee shop and the museum garden. Adjacent to this museum is the Soldiers of Oxfordshire Trust Museum which narrates the life of a soldier. In front of these museums are some five-hole-stocks where miscreants would be secured to endure public humiliation. Five holes is rare but not unique. These stocks have a small roof which offered some protection against inclement weather. 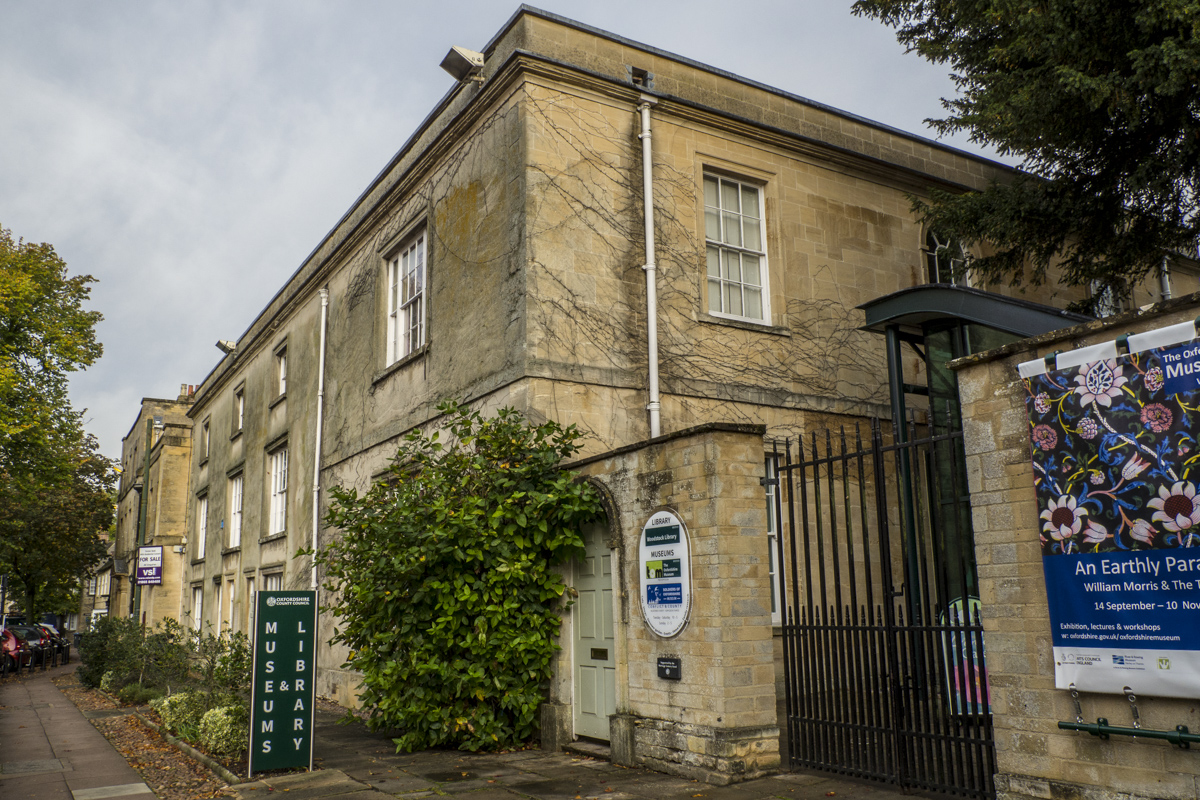 The Oxfordshire Museum in Woodstock

The Town Hall of Woodstock

Dominating the Market Place in Woodstock is the Town Hall. Designed by the famous architect Sir William Chambers in 1766 this building has two beautiful rooms, the Mayor’s Parlour and the Assembly Room, both licensed for weddings. The latter features a series of fine hand stitched tapestries depicting the history of the town. Antique Fairs and Book Fairs are also held here. 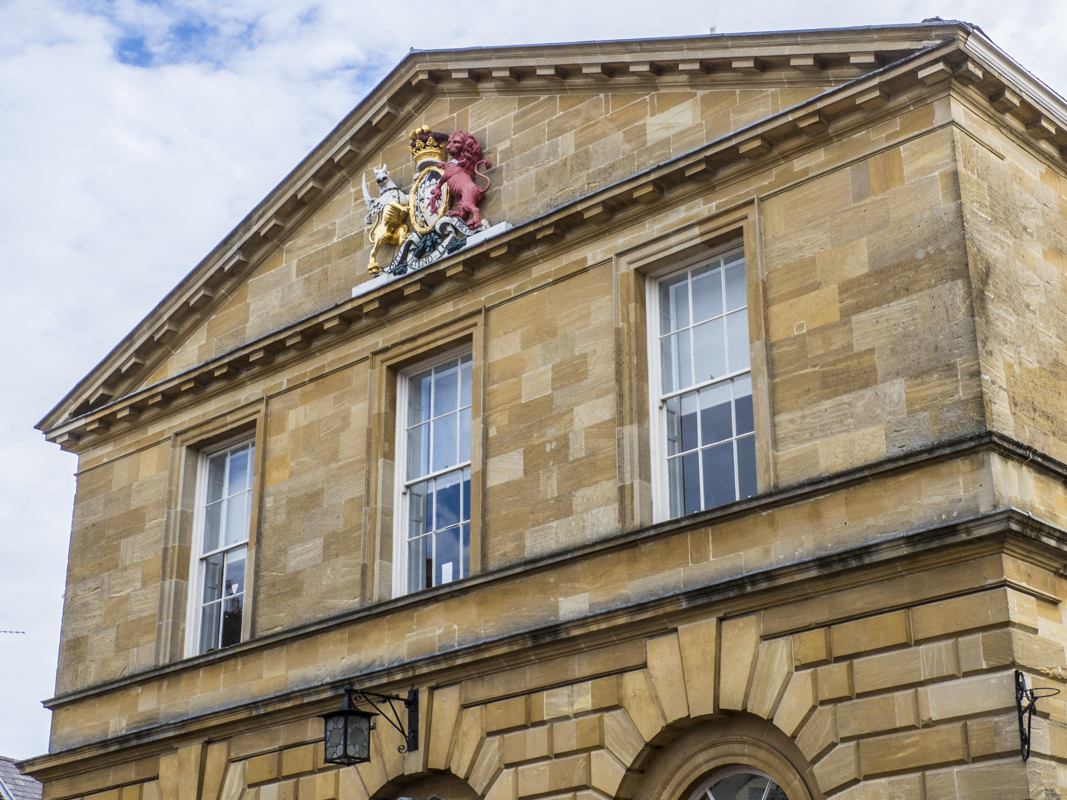 The Town Hall of Woodstock

The Wall Plaques of Woodstock

To enhance the interest and enjoyment of historic Woodstock for both visitors and inhabitants wall plaques were introduced in 2011 and 2014. The Historic Wall Plaques brochure is available in the museum and the library or it can be downloaded from the internet. Through these plaques I learnt that Thomas Chaucer, most probably the son of the poet Geoffrey Chaucer had a house and servants’ cottage here on Park Street. And that the building at 28 High Street now designated Cromwell’s House is rumoured to be the place where Oliver Cromwell stayed during the siege of Woodstock in the English Civil War. This building was once part of an inn that encompassed the houses on either side of it. There is an ancient mulberry tree in the garden that was planted to comply with an Act of 1603 requiring all inns of a certain standard to plant mulberry trees as a condition of their licence. 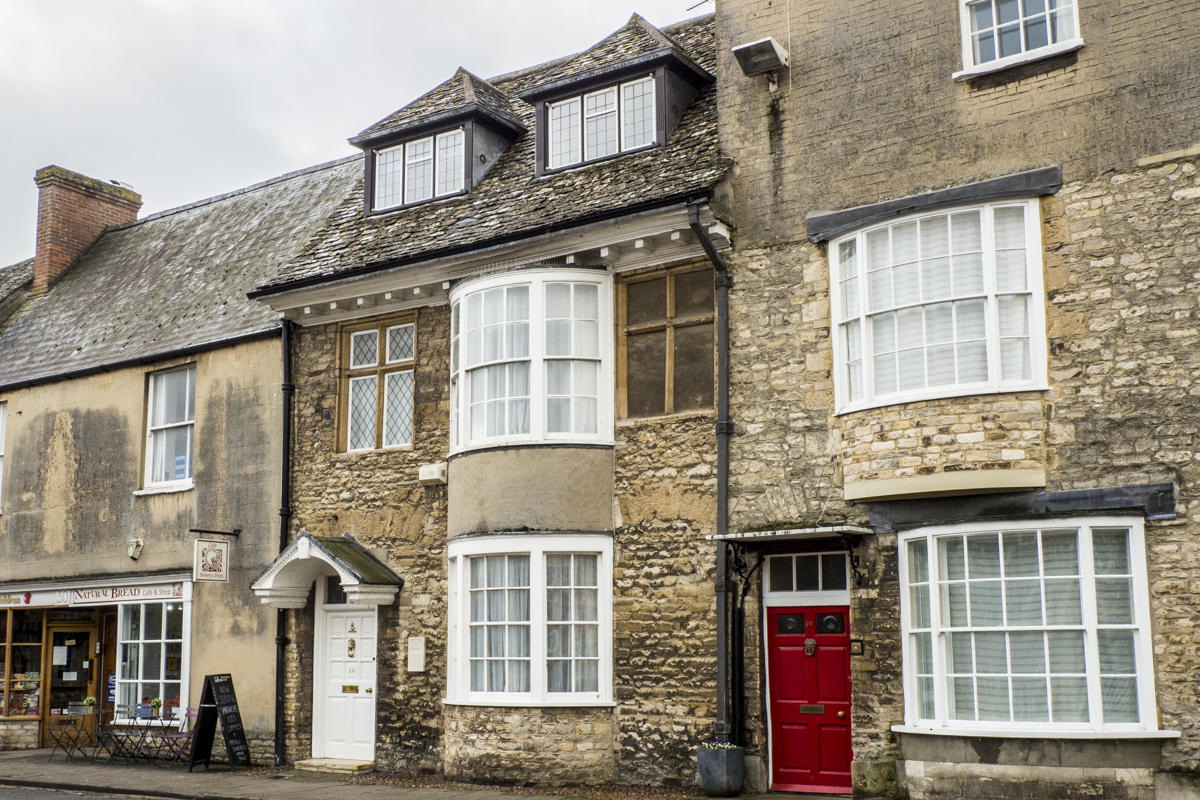 The Fire Marks of Woodstock

Some of the old buildings in Woodstock still display Fire Marks. This tradition started after the Great Fire of London in 1666 which highlighted the need for a better organised response to fires. It was recognised that prevention or control of fires was more economical than simply paying compensation to re-build properties. This resulted in the world’s first property insurance policies issued by the Fire Office the first insurance company in the world. Insured buildings would have a symbol fixed to its façade indicating that it was insured. In the event of a fire a private fire brigade would be dispatched and attempt to put out the fire. A good example of a fire mark in Woodstock is that of the County Fire Office (1807-1906) above the front door of 14 High Street. It depicts Britannia holding a shield with a lion next to her. 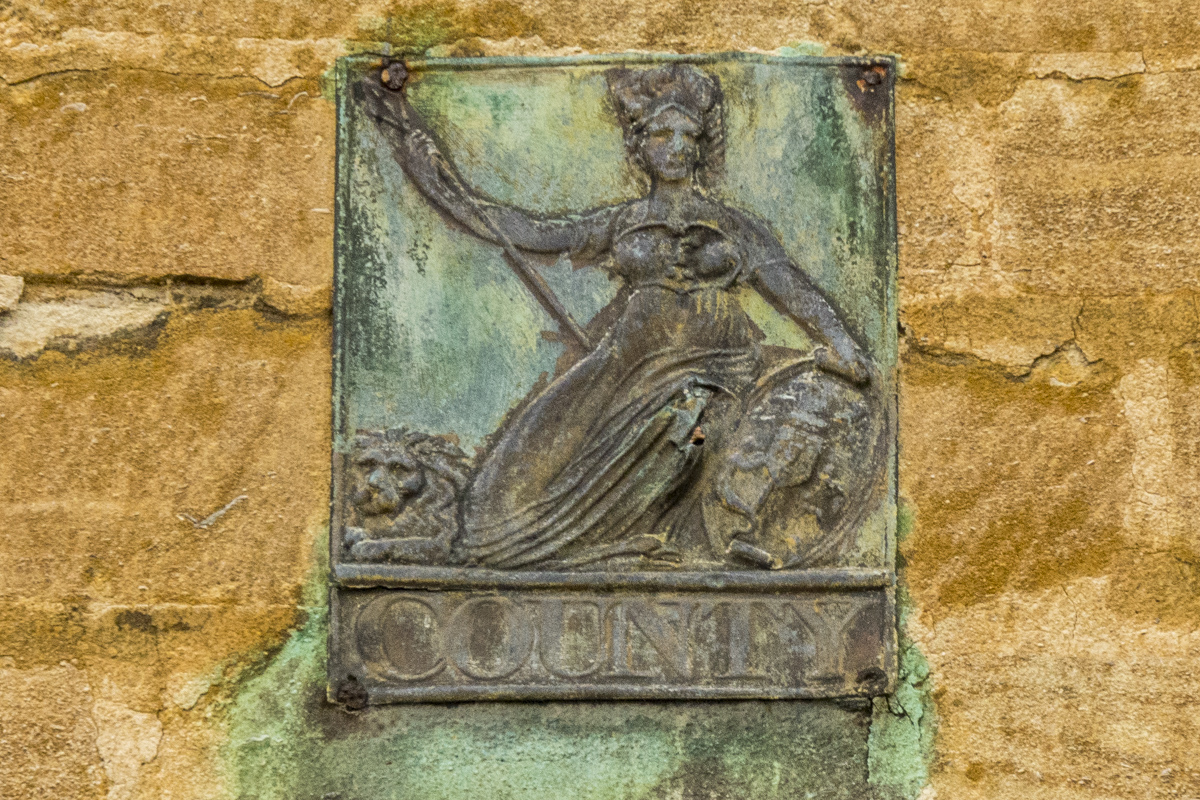 The Woodstock Water meadows a unique feature in the centre of town. On their north side is the mill stream that carries water under the main A44 road and into the Blenheim Lake. The River Glyme flows along the south side of the meadows. In 2016 the Wychwood project secured funding to undertake a range of projects to preserve this natural habitat and improve access to the public. Opposite the access point to these Water Meadows on the A44 is an entrance to the grounds of Blenheim Palace. The public are able to walk through the parkland surrounding the palace. These lovely walks also afford magnificent views of the palace and the Column of Victory – from a distance. 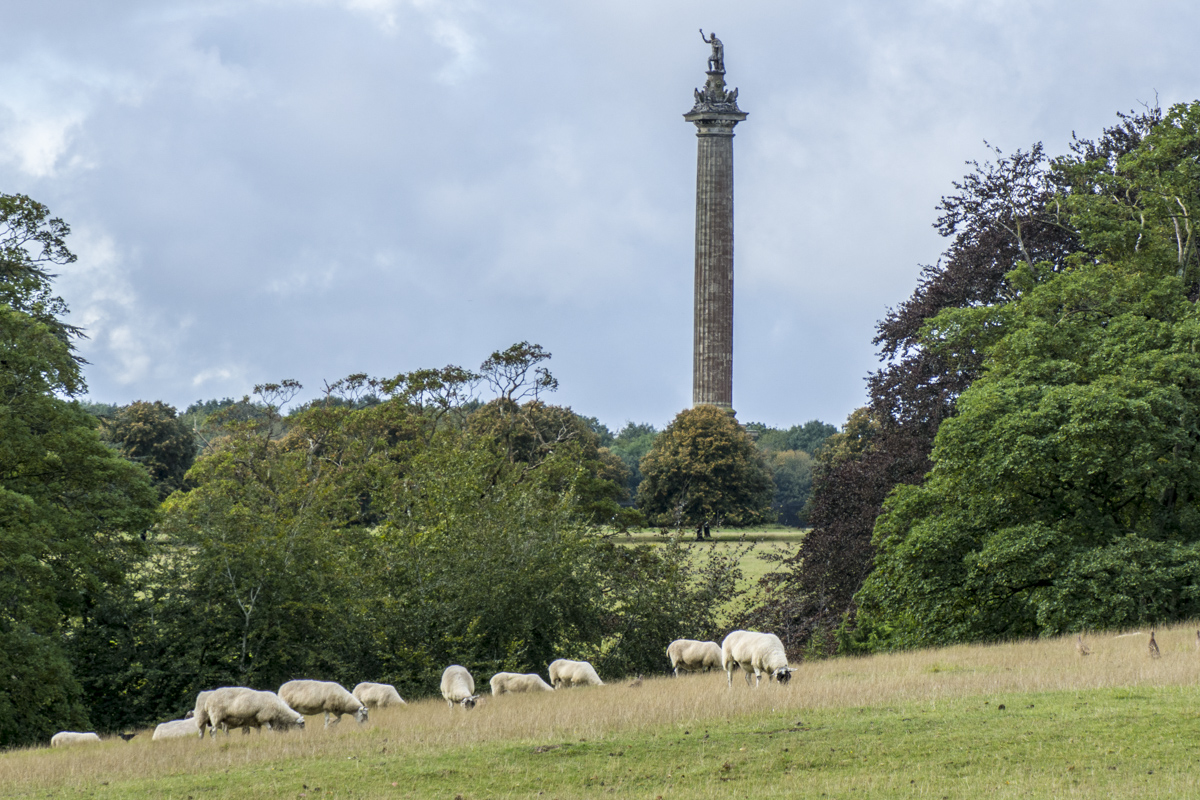 Walking in the Grounds of Blenheim Palace

I entered the grounds of Blenheim Palace through the Town Gate at the end of Park Street in Woodstock. Strolling up to the palace I had lovely views of Vanburgh’s Grand Bridge that divides the Queen Pool and the Great Lake. Vanburgh never finished his bridge which, at the time it was built, stretched across an area of marsh land. It was Capability Brown who created the lakes when he landscaped the grounds of the palace. 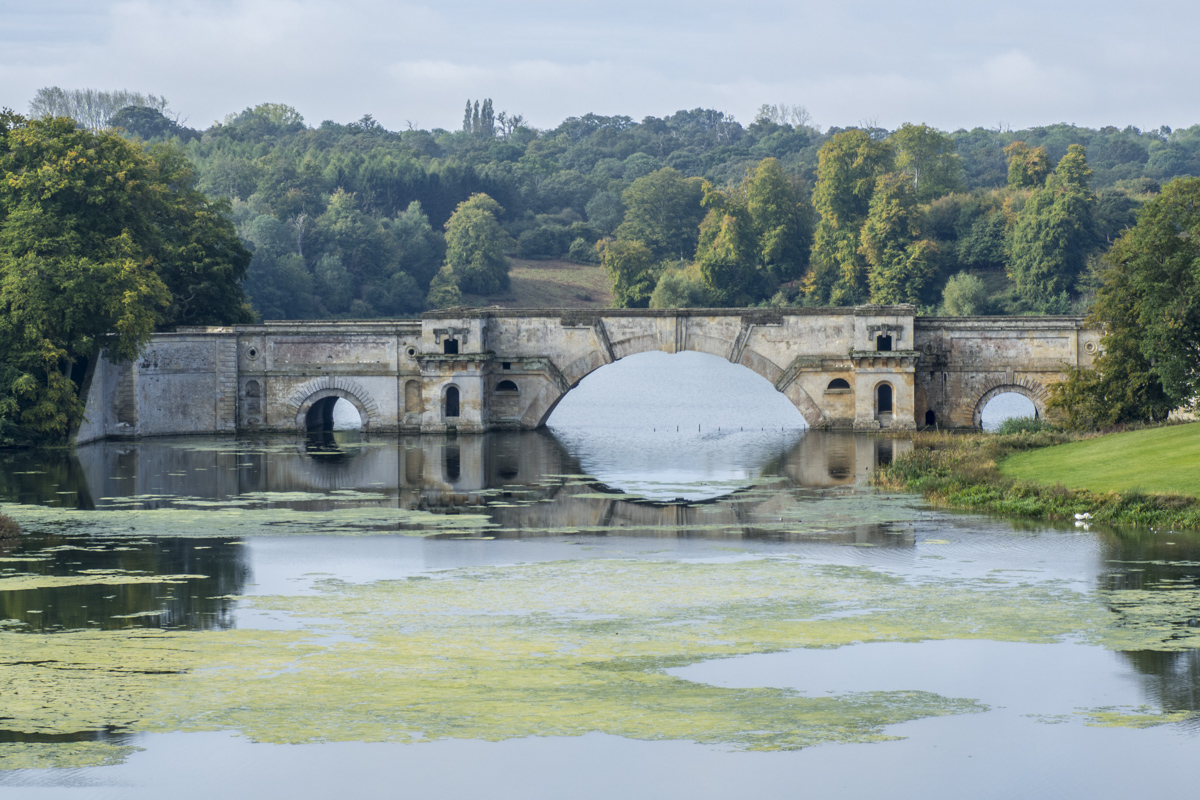 Instead of heading for the palace itself I decided to walk to the Pleasure Gardens through the park. While I was there I got completely lost in the maze, not once but twice. I also spent some time in the Butterfly House waiting for a butterfly to settle on one of the beautiful blooms in there. 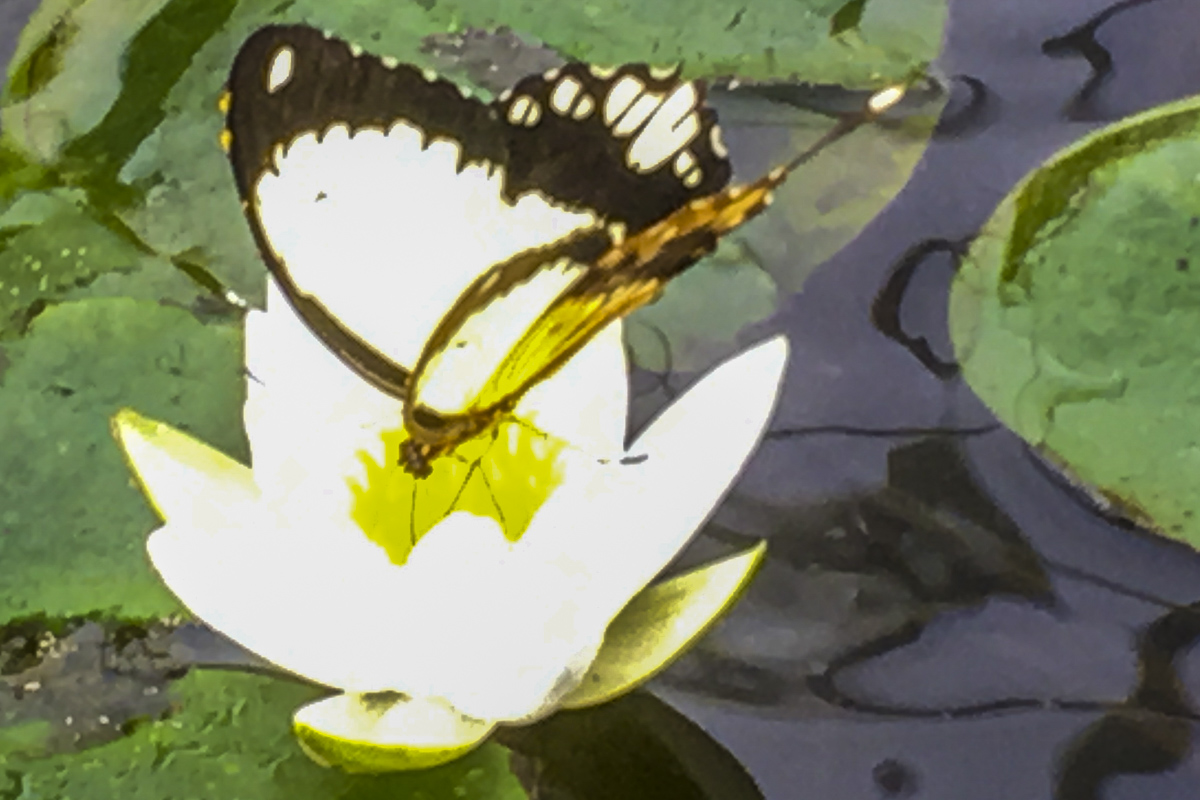 The Butterfly House at Blenheim Palace in Woodstock

I could have taken the little train back up to the main entrance (50p) but I preferred to walk through the surrounding parkland. First stop the formal gardens. After admiring the water terrace garden, I followed the path through the Winston Churchill Memorial Garden. This garden celebrates his birth in the palace and memorial stones record significant dates in his life. 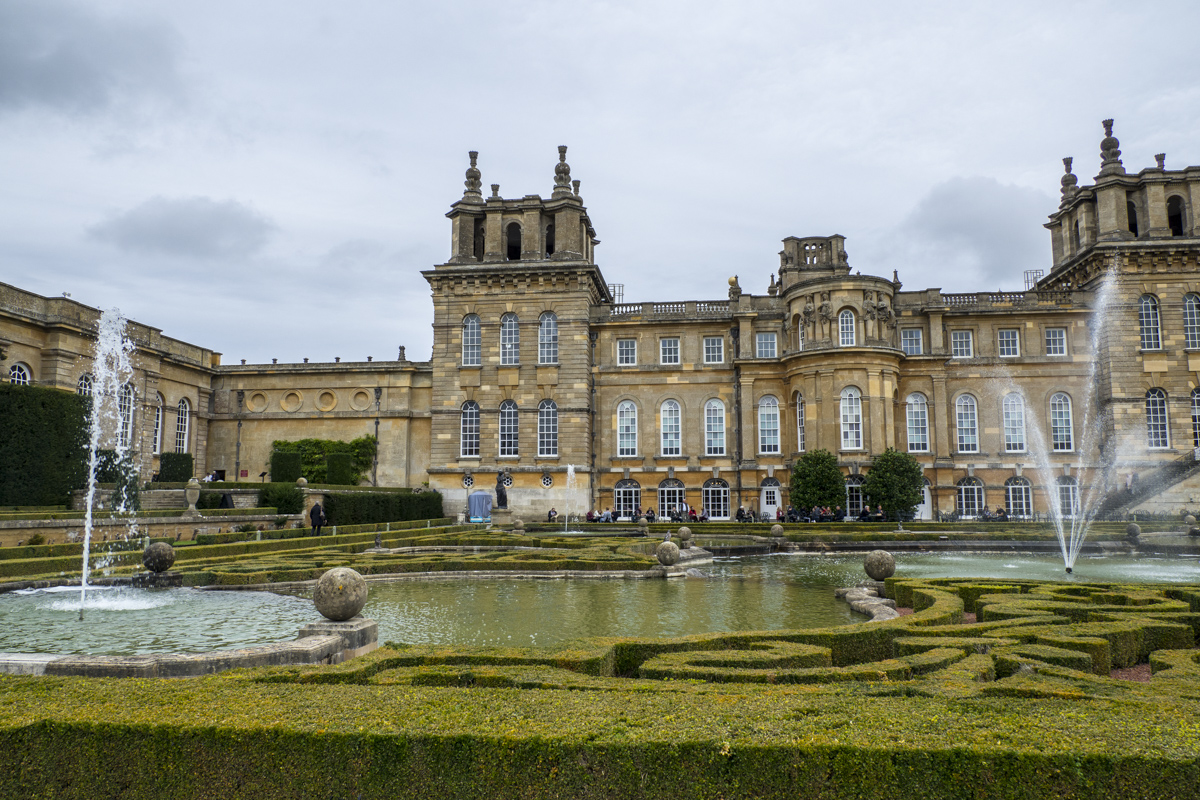 The Water Terrace Garden at Blenheim Palace in Woodstock

I made my way to the Rose Garden next and then down to the lakeside where the Cascades gush down over the rocks and past the old pump house. 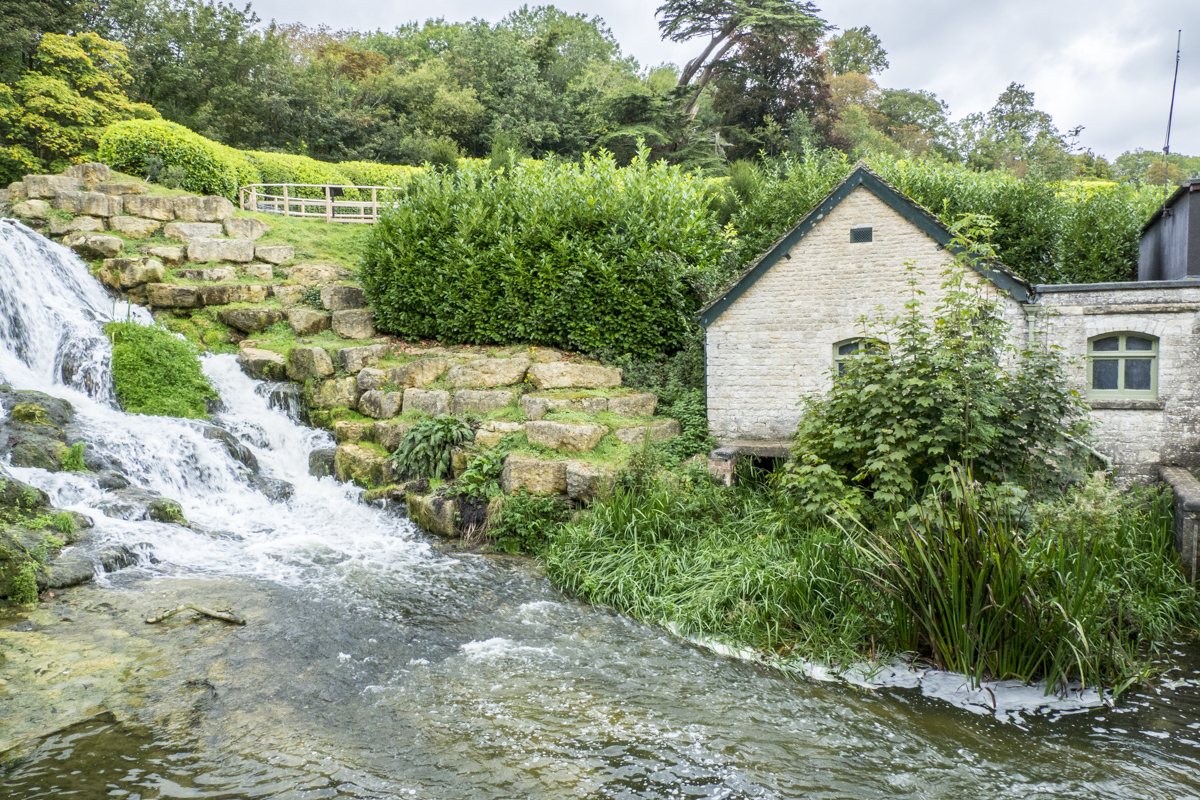 The Cascades at Blenheim Palace in Woodstock

After walking back along the lakeside path I was ready for something to eat. Afternoon tea in the Orangery looking out on the Italian Garden creates the illusion of living in a stately home. Uniformed staff move silently and swiftly around the large room as friendly as you would like them to be but always efficient. After perusing the menu, I chose the classic afternoon tea with a ‘special’ breakfast tea. Scrumptious. 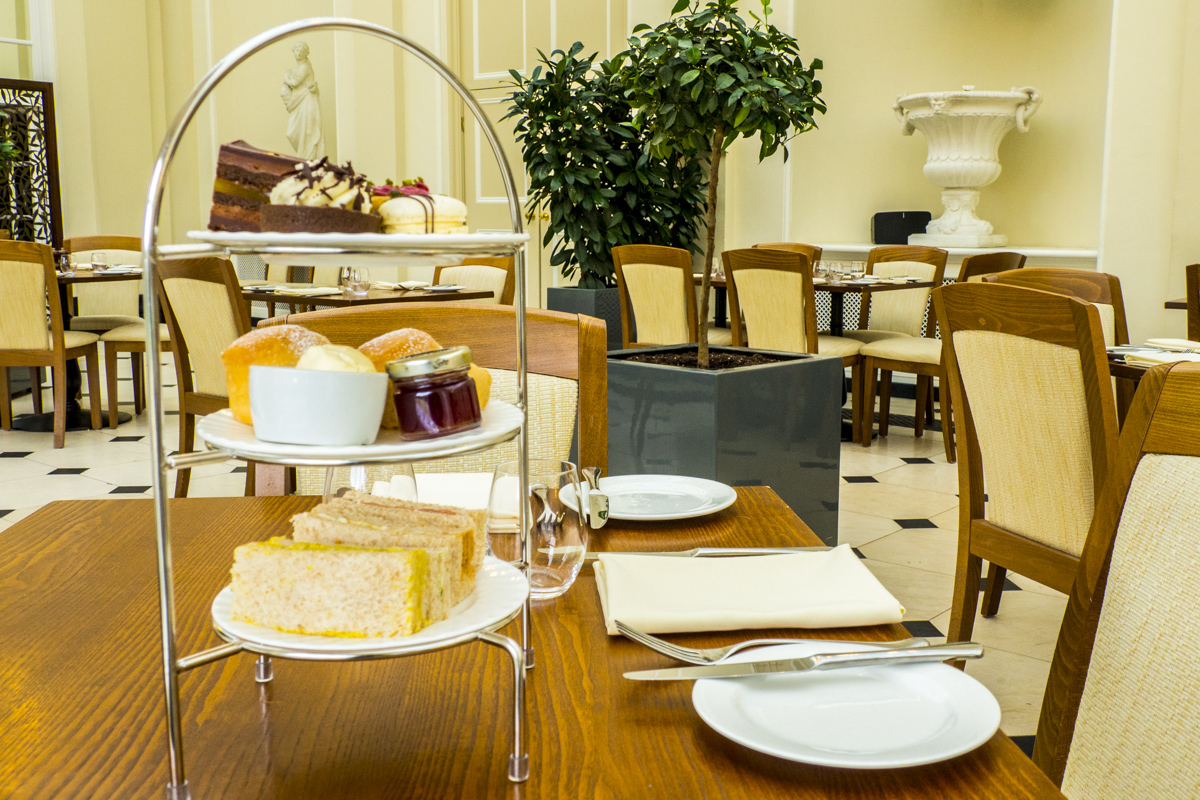 Afternoon Tea in the Orangery at Blenheim Palace in Woodstock

Rested and refreshed it was time to explore the inside of the palace. Of the various tours available I decided to take the self-guide tour of the state rooms. I was very impressed by the free audio guide. Firstly, because it had proper headphones. Secondly because it was so easy to use and offered several options for each room depending on how much information I wanted to listen to. 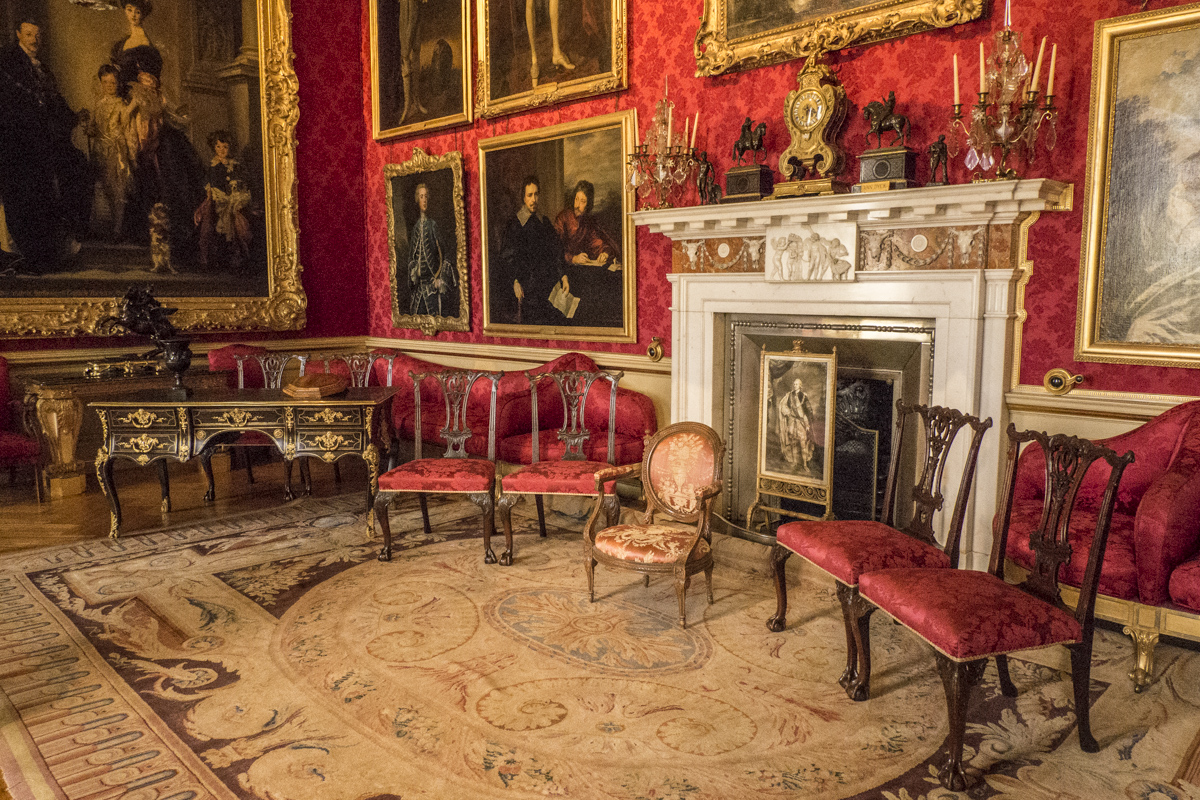 The Red Drawing Room at Blenheim Palace in Woodstock

Back outside the palace there was still time to walk up the hill to the Column of Victory. En route I took a detour through the woods to visit the amazing Harry Potter Tree and Rosamund’s Well. I had come full circle and back to the origins of Woodstock. 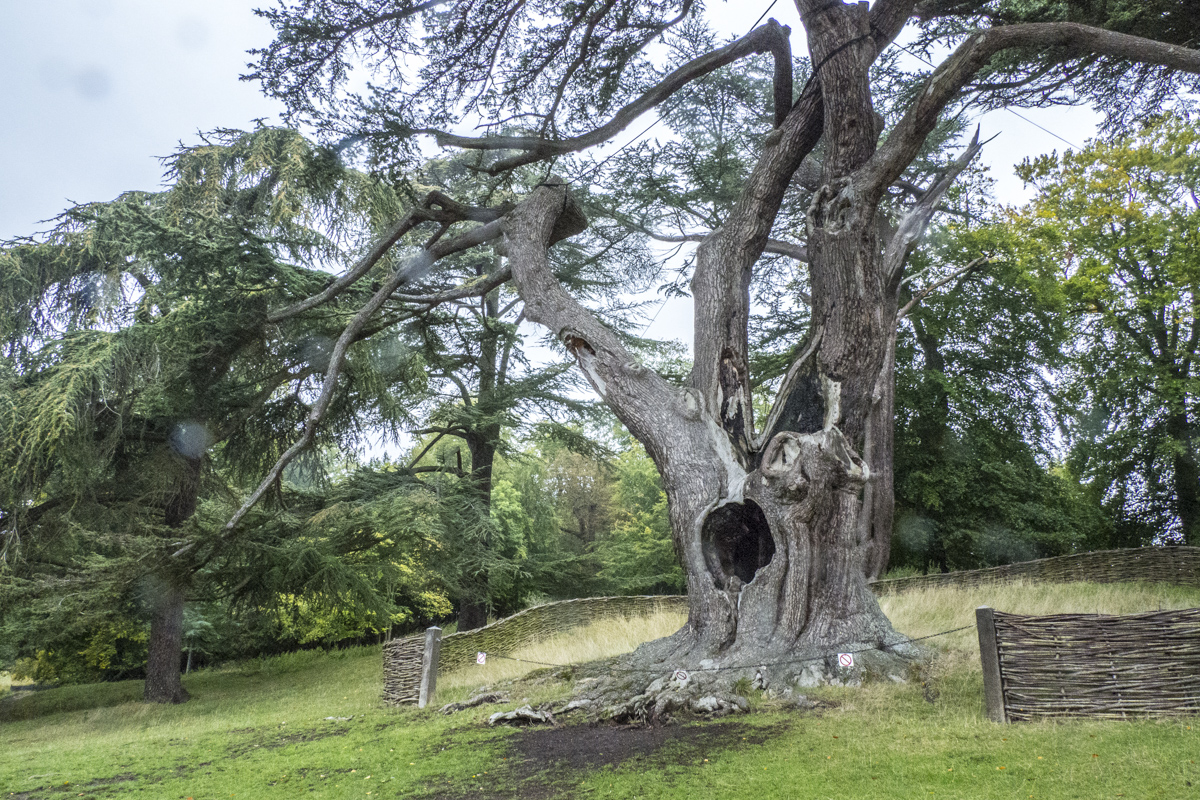 The Harry Potter Tree at Blenheim Palace in Woodstock

Where to Stay in Woodstock

Full of character, The Feathers is a combination of four seventeenth century cottages and a butcher’s shop. Snug lounges and pretty bedrooms are linked by narrow corridors and staircases.  Its great location, in the centre of Woodstock means it is well-place to explore the town and gain entry to Blenheim Palace through the Town Gate. 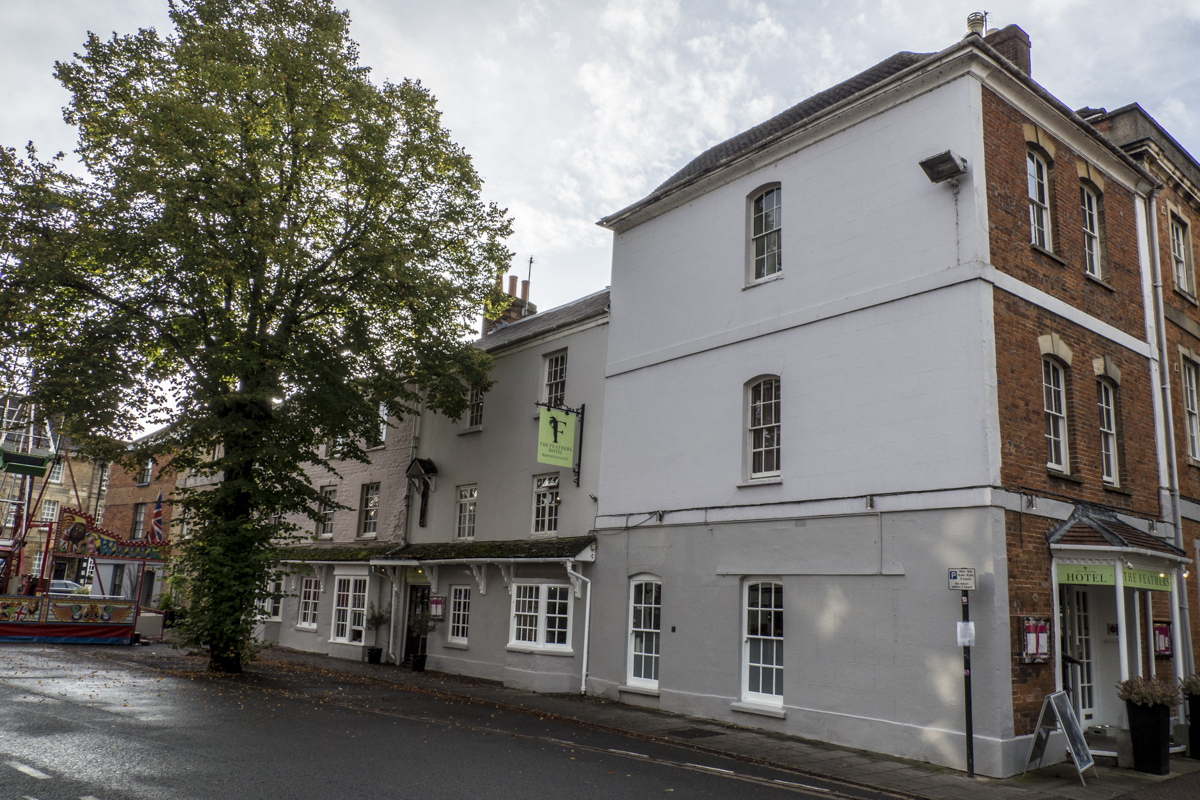 The Feathers in Woodstock

My lovely suite had a large bedroom, a sitting room and a spacious bathroom. The latter featured a large claw-footed bath and separate shower. After a busy day exploring the town and Blenheim Palace a long soak in the bath was just what I needed. It was followed by a delicious meal in the hotel restaurant – a great combination of gourmet dishes and classic cuisine. My stay here was a real treat. 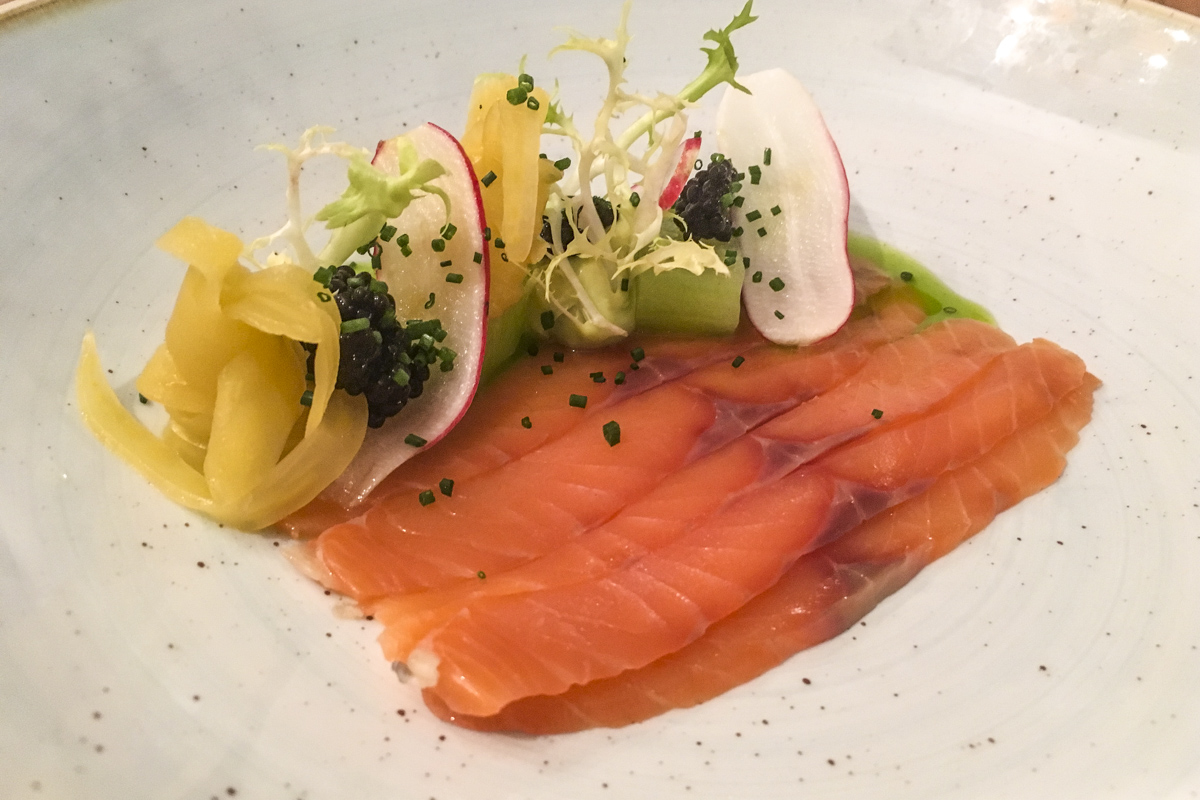 Smoked Salmon Starter at the Feathers in Woodstock

How to get to Woodstock

Woodstock is well-connected by road as it is linked to the M40 by the A44 dual carriageway. There are regular trains from London Marylebone and London Paddington to Oxford. There is a regular bus service from Oxford Railway Station to Woodstock operated by the Stagecoach Bus Company