The old Apothecary’s Mansion at number 76 Rue Pierre Ledent in the heart of Montreuil-Sur-Mer, Pas de Calais offers its guests a unique and memorable experience masterminded by a host par excellence.

Maison76 was built around the middle of the eighteenth century. It was when it changed hands during the French Revolution that it became the home of an apothecary who provided pharmaceutical services in the town of Montreuil sur Mer for the next 193 years. Today, having been restored to its original purpose as a maison du charme it is an exceptional bed and breakfast establishment. On returning from a day exploring guests are invited to take afternoon tea in the wonderful eighteenth century drawing room. It was like stepping into another century. This spacious, light room looks out onto the walled garden beyond. It still has the original panelling, fireplace and Watteau-style frescoes. Plus a few porcelain parrots that have nothing to do with anything except that Tim Matthews, my host, likes them and collects them. It all adds to the charm of the place. 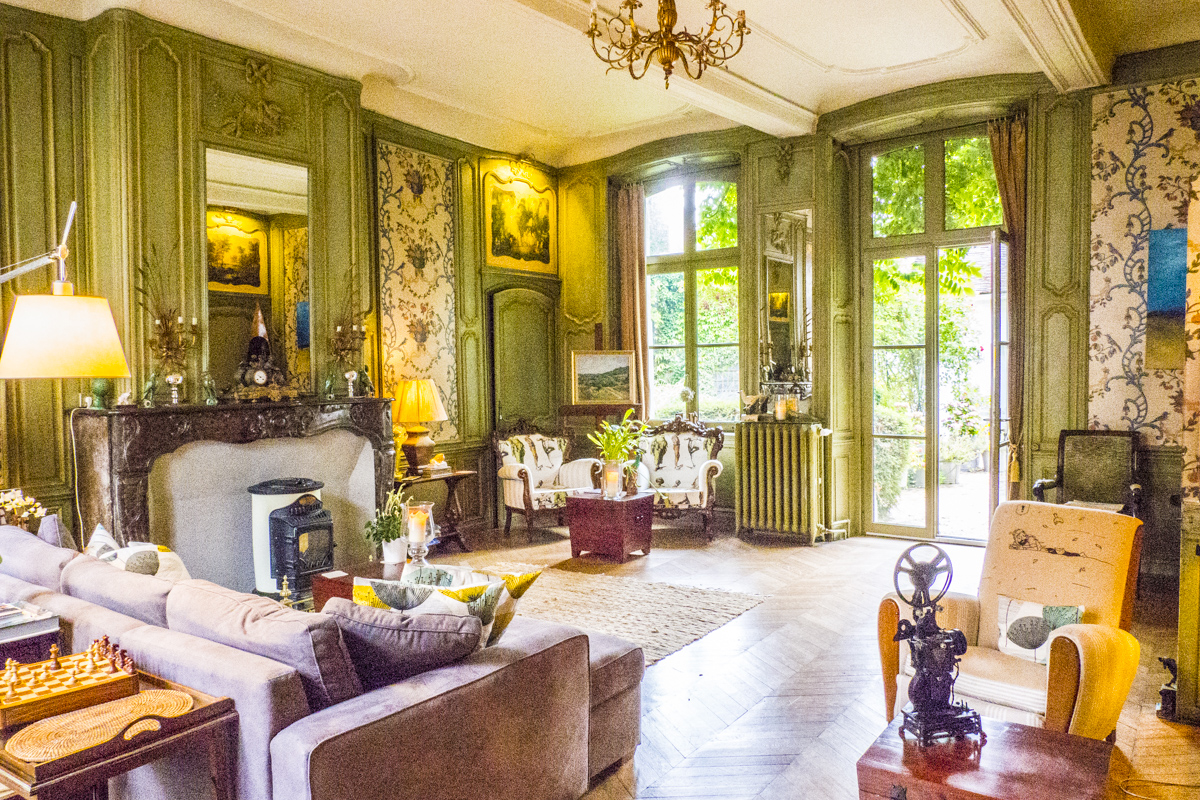 My bedroom was large and comfortable and I was very grateful for the huge double bed. Not that I needed such a large bed it was just so nice to have one. After Tim had carried my case to my room he presented me with a special adaptor. This was so useful as it had four sockets and I could re-charge everything at once – such a thoughtful gesture and much appreciated relieving me of the necessity of crawling around on the floor looking for extra sockets. 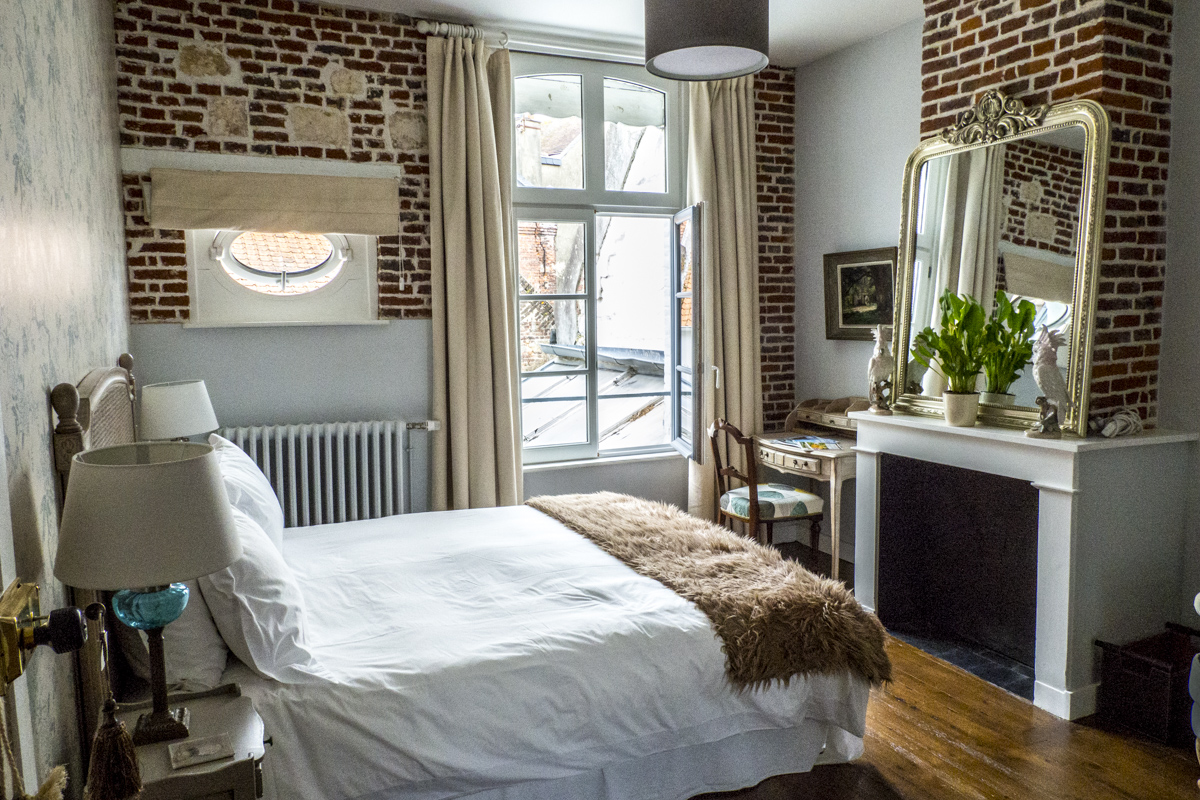 At the back of the house is a lovely walled garden where guests can sit and enoy a quiet drink with no sense of being anywhere near the centre of a town in this peaceful place. There is also a small swimming pool situated unobtrusively in one corner. 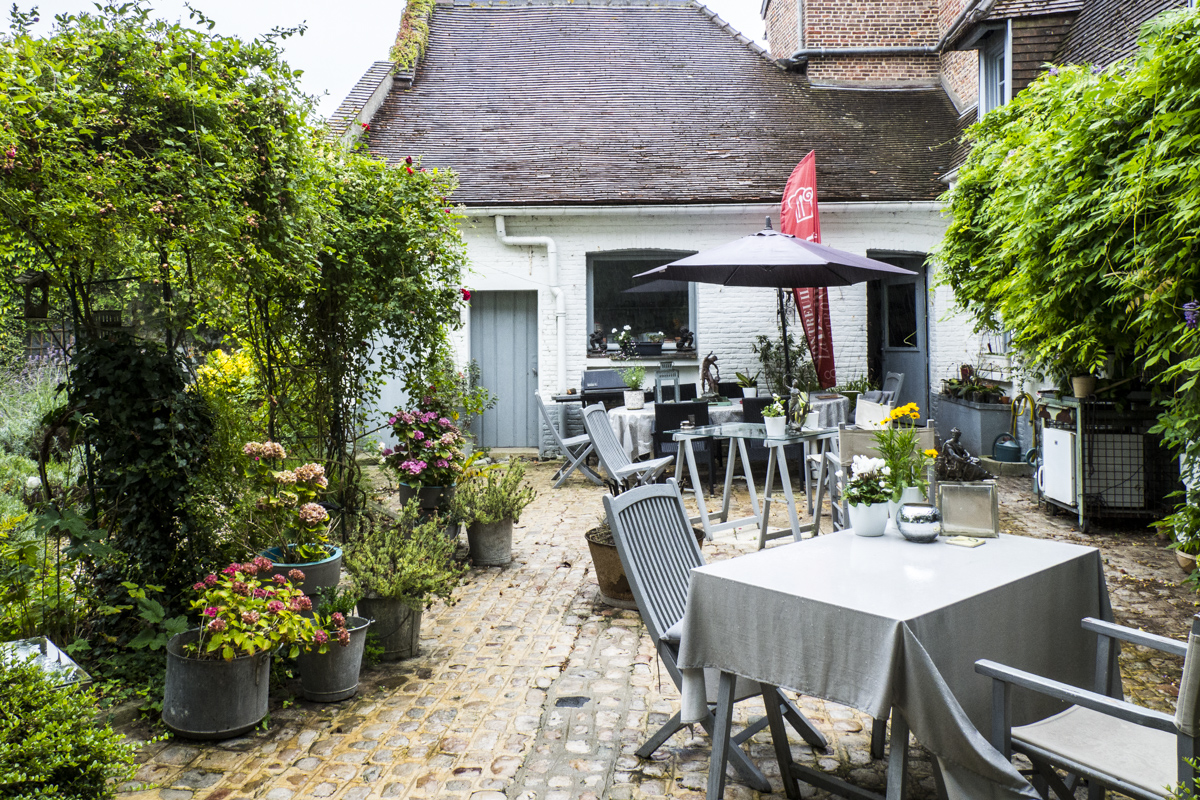 Tim is very much at the forefront of promoting Montreuil sur Mer as a gastronomic destination and he provided me with a comprehensive list of recommended restaurants and information about each one including specialities and price range. He recommended Le Clos des Capucins when I said I liked fish and promptly booked a table for me. It was a great recommendation and just a few minutes’ walk from Maison 76 in the main square, Place du Général de Gaulle. I really enjoyed my meal as the food was really good and the atmosphere very relaxed. 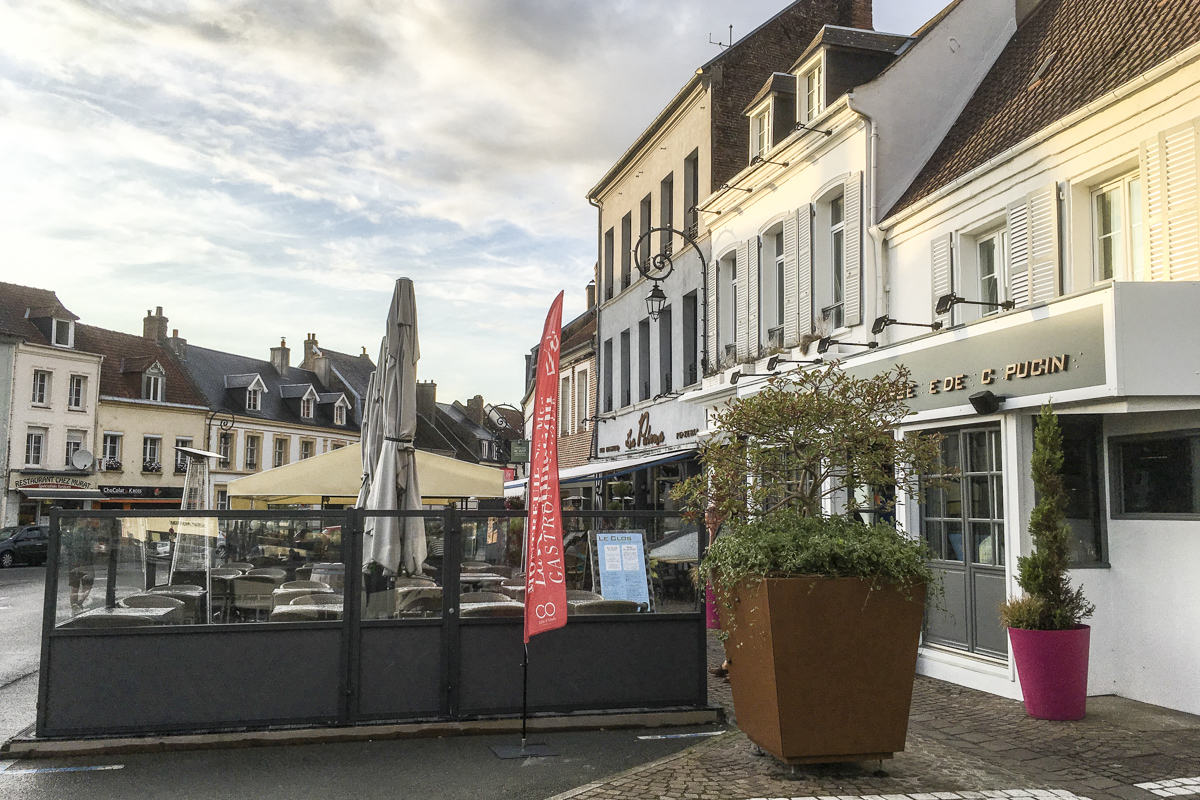 After dinner I had a ticket for the Son et Lumière festival of Les Misérables but first I took the short walk back to Maison 76 to collect the cushions and blankets that Tim had left in reception for me. At that time, it was a balmy evening and hard to believe I might need a blanket. But later that evening the temperature plummeted and my evening would have been ruined had I not been able to snuggle up in the blanket. So thoughtful and it made me feel very special. 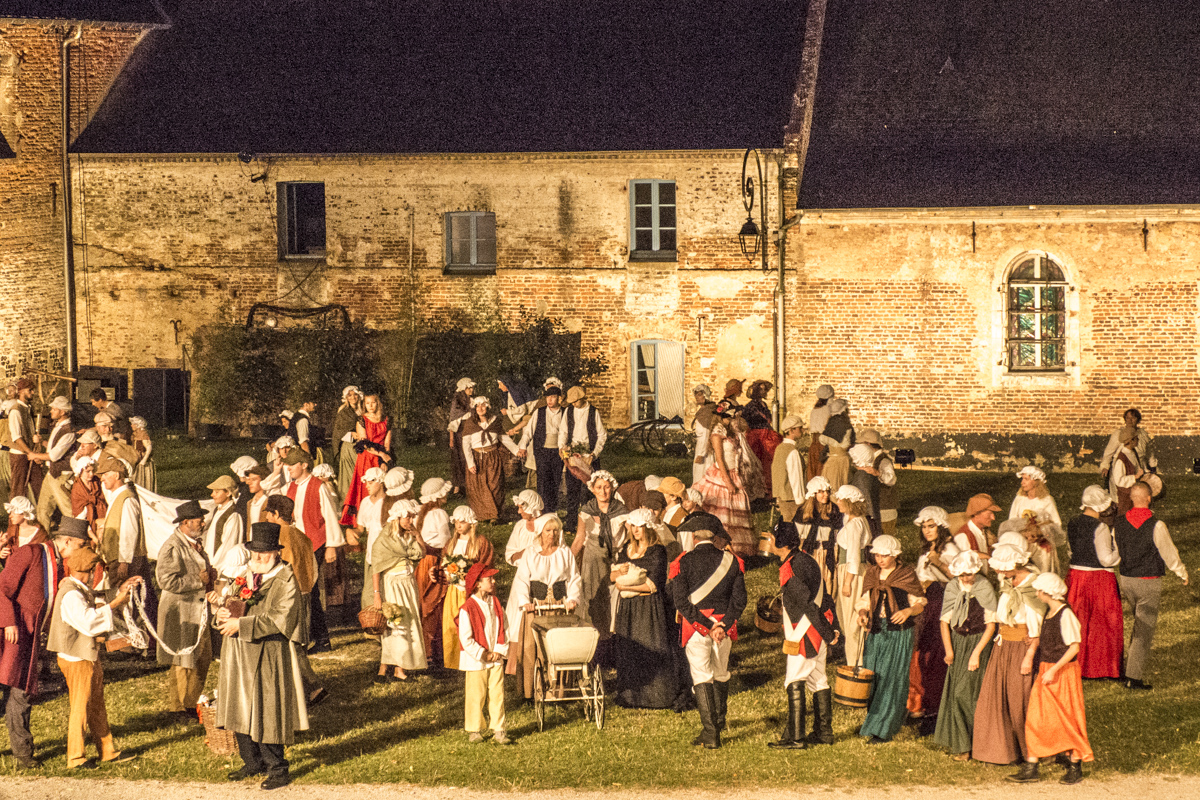 Breakfast the next morning was superb. It was not warm enough to eat in the garden but the breakfast room was a pleasant alternative. Another lovely room furnished with four tables and an old dresser bearing a delightful buffet of fruit, cereals, home-made yoghurt, fresh bread from the local baker, a local cheese (not yet named) and local ham. Breakfast is my favourite meal of the day especially when presented with a delightful spread such as the one in front of me. I started with a refreshing glass of home-made apple juice and some fresh fruit. By then a cafetière of freshly brewed coffee had appeared and I started on the bread (two different types), cheese and ham. With immaculate timing, just as I finished my second course Tim appeared with two warm croissants. I could not refuse their flaky sumptuousness and besides, I had yet to try Tim’s homemade jam and marmalade. They were both excellent. Freshly cooked eggs were also on offer but I was more than happy with the buffet. A great start to my day. 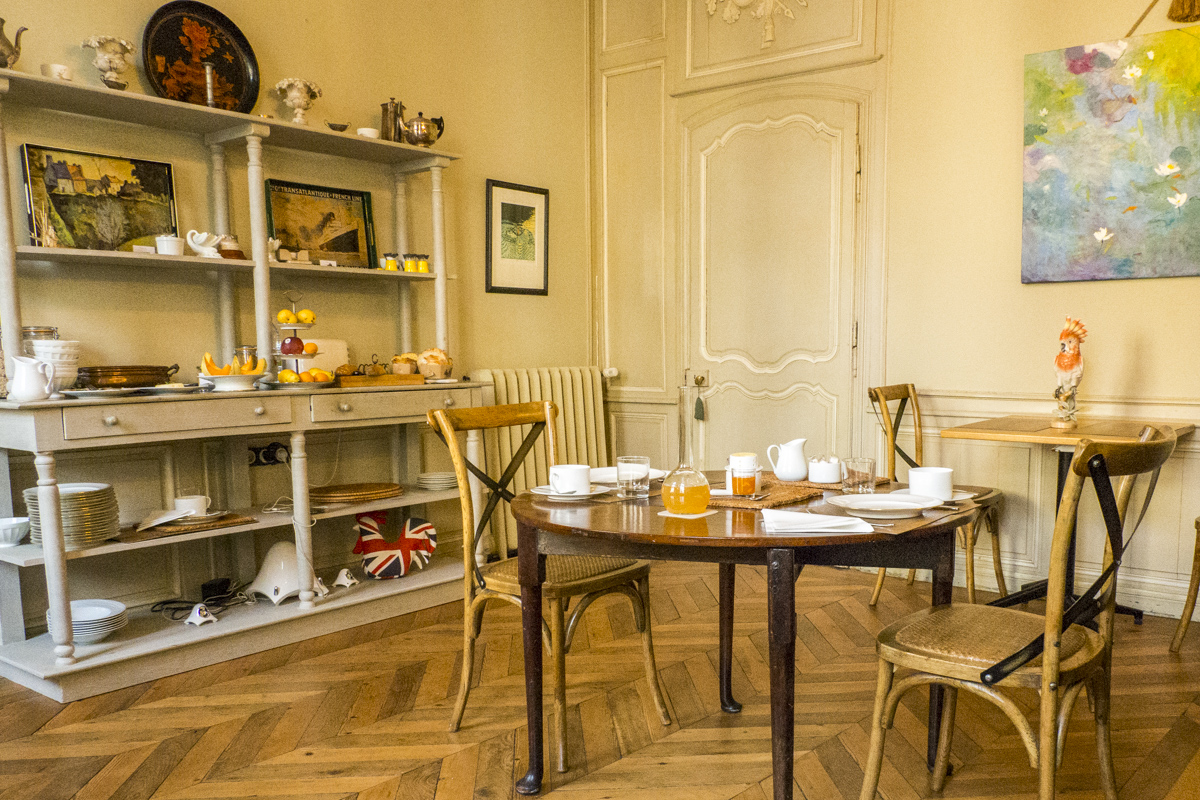