From Coaster to Castles in Copenhagen with TravelEyes

The tour operator TravelEyes was established to make travelling around the world accessible to the visually impaired (VIs). Groups of VIs paired with sighted travellers visit worldwide destinations and help each other experience that destination through senses other than sight.

On my last trip with TravelEyes I visited Copenhagen, the lovely capital of Denmark. I never feel I truly know a place until I have conquered the public transport. This proved to be remarkably easy in a city that claims to have the best public transport system in the world.

Our hotel, Hotel Østerport was next to Østerport station a few stops along the same line as the airport so using public transport was easy. I soon found the bank of DSB dispensing tickets of all varieties and, with the help of the assistant hovering by the machines I was soon in possession of a small city pass for each member of the group. This pass entitled us to a return journey to the airport and unlimited use of the S line, metro and buses within the inner city for the next five days. There was so much to see within this boundary it was unlikely we would want to go beyond that area and this proved to be so. Once we had checked into our hotel lunch was next on the agenda and we set off to explore Østerbro. 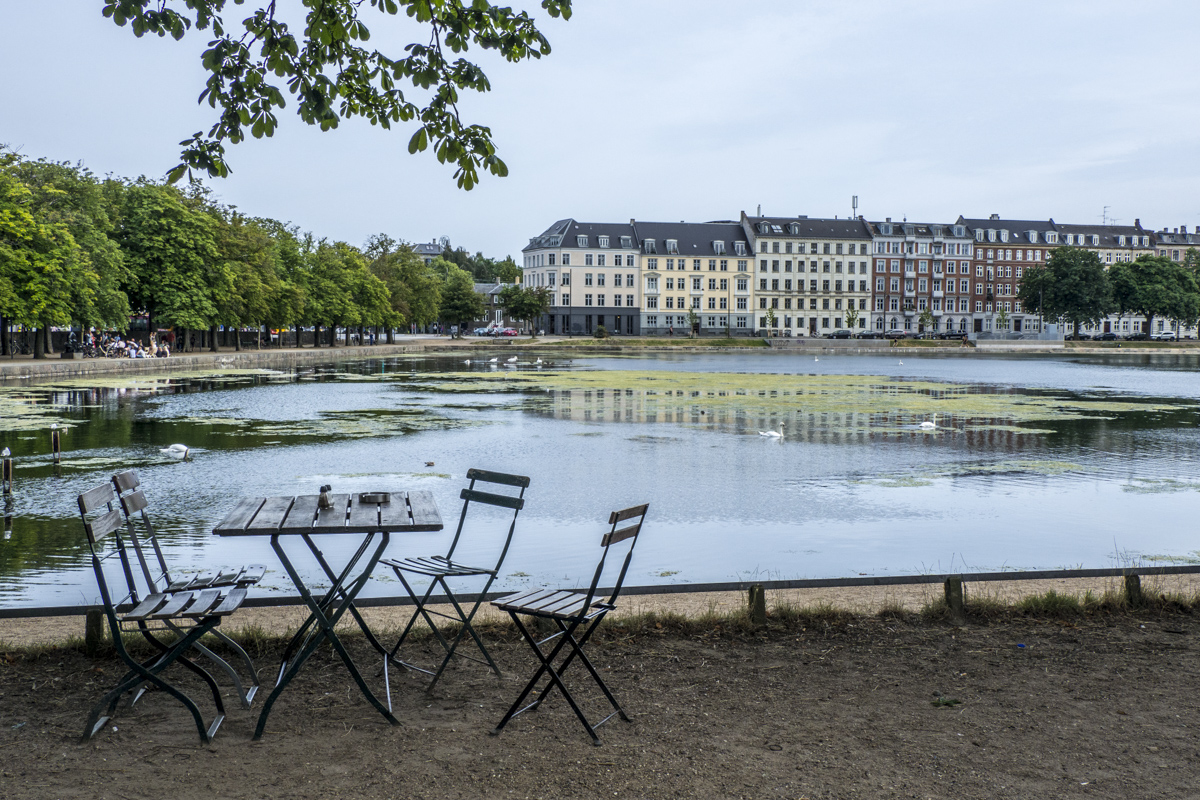 Eating Out in Copenhagen

It was a good ten-minute walk to the Copenhagen Lakes from our hotel but I had been advised I would find several restaurants and cafés in this area. We ate at the Søpromenaden café that serves a good variety of the traditional Smørrebrød otherwise known as an open sandwich. I tried the traditional meatballs served with some lovely, fresh rye bread. It was very pleasant sitting outside overlooking a lake – until the rain came and we had to retreat inside. 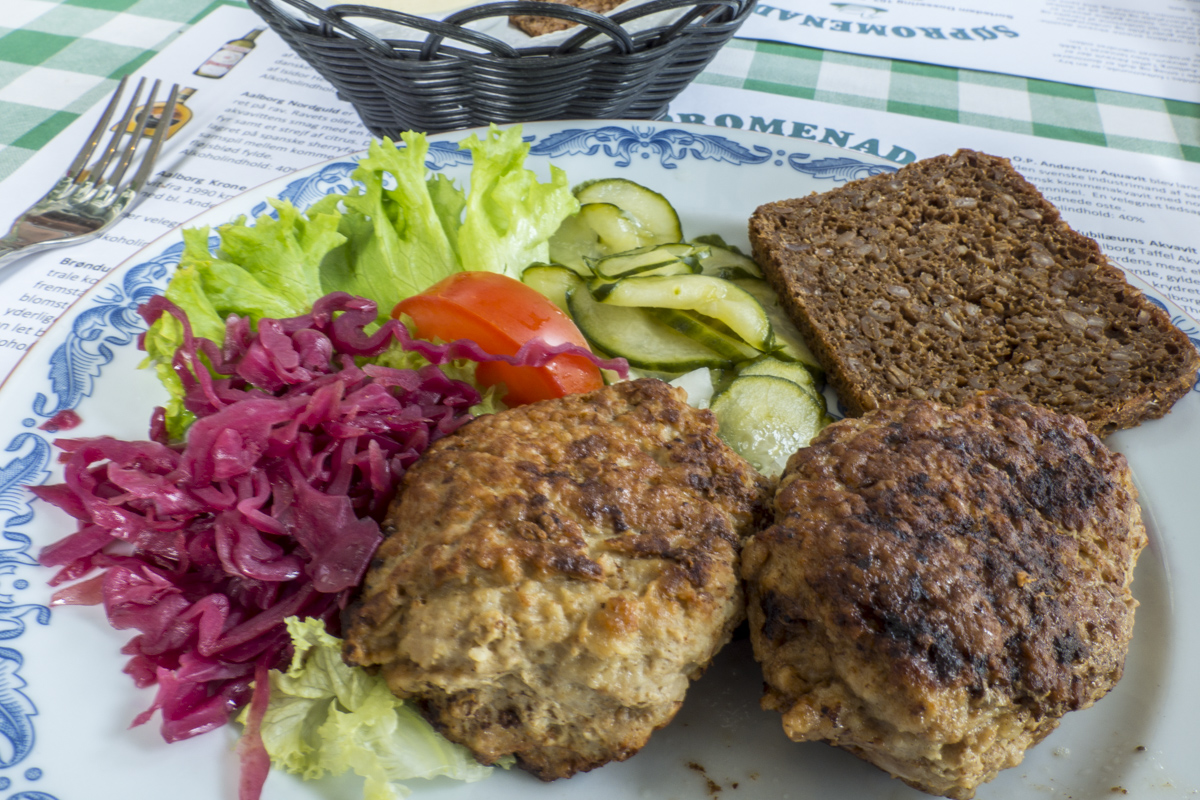 Smørrebrød at Søpromenaden Restaurant in Østerbro, Copenhagen in Denmark

Walking back to the hotel I discovered that the Danish are very fond of beef burgers and sushi. As visitors to Copenhagen are probably not quite so fond of these cuisines I was looking for something more traditional. It was July and the holidays had started which meant several restaurants were closed. However, I was able to reserve tables at a more typical restaurant, Dag H. We enjoyed two evening meals sitting outside enjoying their lovely food – in particular the delicious, traditional strawberry cake.

Eating out in Denmark is very expensive and it was difficult to find restaurants that suited everyone’s pocket but we managed, occasionally resorting to street food and a Danish style (no spice) Mexican restaurant close to our hotel El Viejo Mexico. Interspersed amongst our eating experiences was our sightseeing itinerary which started with a walking tour of the inner city.

A Walking Tour of Copenhagen

We met our guide for our three-hour walking tour of the inner city by the Dragon Fountain in the Town Hall Square or Rådhuspladsen. In the days when Copenhagen was a Viking village the dragon was a symbol of power and the fountain is a reminder of this. Behind the fountain is the impressive Town Hall or Radhus which was completed in 1905. The Town Hall is an open building and the public can come and go as they please. Dragons are also very much in evidence guarding this Romantic style building. 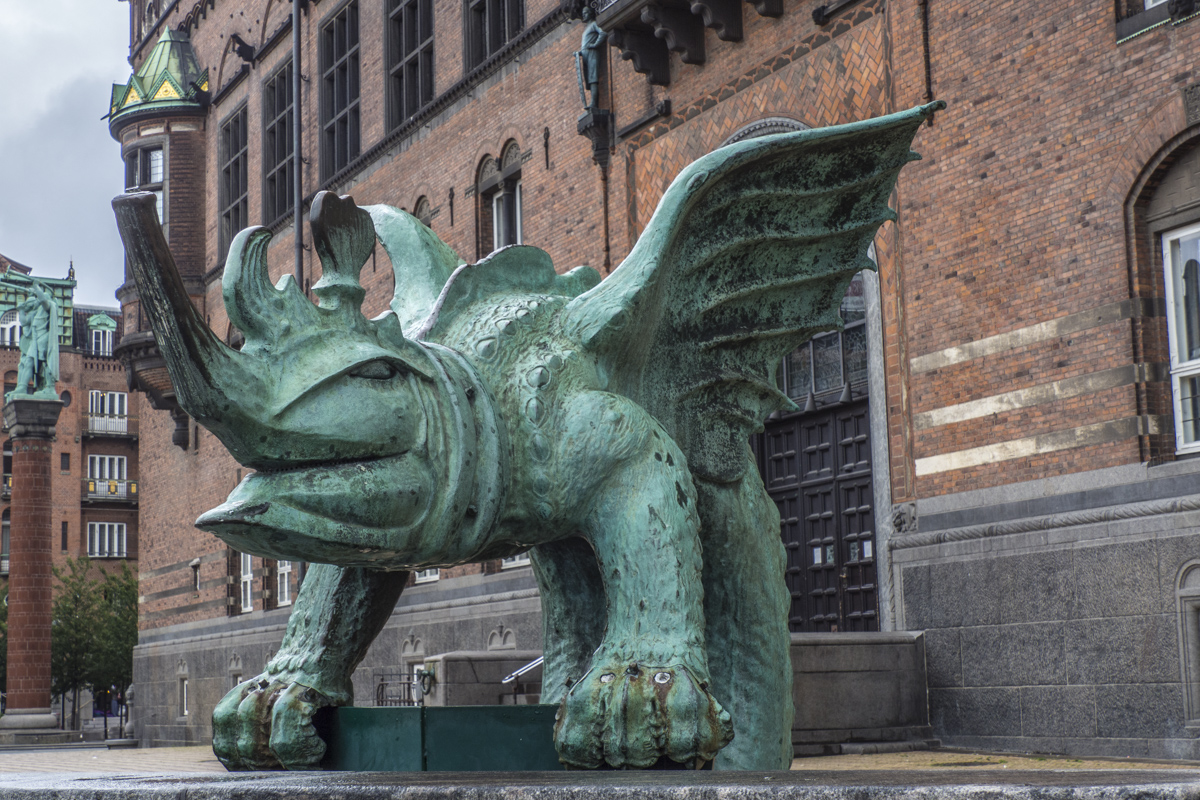 A Dragon Guarding the Town Hall in Copenhagen

Other highlights of this square include a large statue of Hans Christian Anderson the world famous writer of fairy tales. As a young man he had aspirations to become a famous actor and for a while he performed at the Royal Danish Theatre as a dancer and a singer until illness robbed him of his ability to sing. We paused in front of this theatre during our walking tour.

The Royal Danish Theatre in Copenhagen

At the top of the Richshuset building on the corner of Vestervoldgade and Rådhuspladsen is the Vejrpigen or Weather Girl. This unusual creation features a golden girl who forecasts the weather. If it is going to be sunny she emerges from the tower on her bicycle. But if she appears with her dog and umbrella it will rain. If both can be seen at the same time, then the day will be overcast. The Rådhuspladsen was also the seat of the worst fire in Copenhagen in 1728. As a result of this and other fires much of the old town was destroyed but we did walk down one of the oldest streets in the town, Snare Garde, lined with traditional old houses. 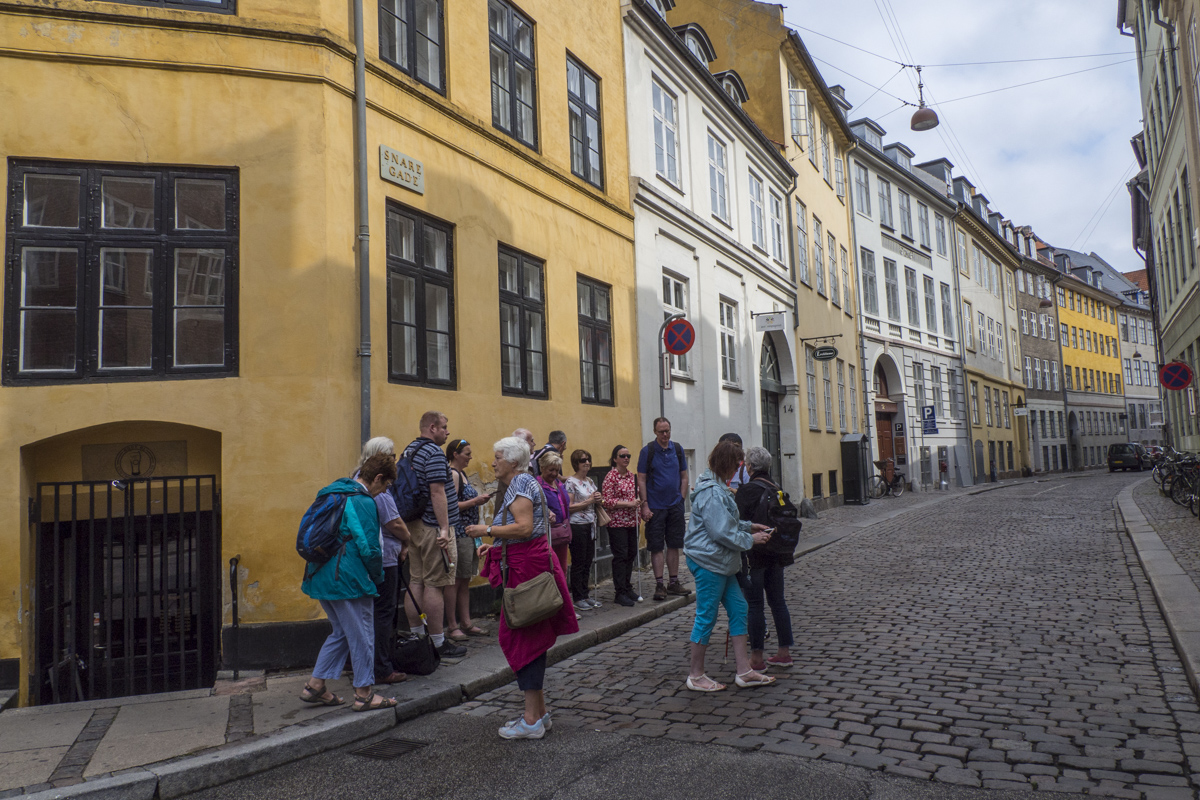 Walking Tour of Copenhagen in Denmark

Other places we visited included the Christiansborg Palace on the tiny island of Slotsholmen that today is home to the Danish Parliament Folketinget, the Supreme Court, and the Ministry of State. We strolled along Nyhavn, once a thriving commercial port and now a favourite haunt of locals and tourists with its colourful old houses on either side of the water. We paused in the Royal Palace Square to admire Amalienborg, residence of the current monarch, Queen Margrethe II before finishing our tour on the bank opposite the Royal Danish Opera House.

The Tivoli Gardens proved to be a huge success with everyone in the group. The gardens open at eleven in the morning when crowds of people tumble through its entrances. A very kind man on the gate allowed us to go straight in and the crowds around us were persuaded to step aside to let us through. Once inside we spent some time exploring in small groups before meeting up for lunch. The gardens are magical, day and night – beautiful gardens and crazy fairground rides blend together. Woven into this glorious mixture are places are food outlets varying from hot dog stands to fine dining restaurants. I will long remember tucking into some traditional fish and chips while a big dipper ride thundered over my head accompanied by the screams of the occupants of the whizzing, spinning cars. We spent the afternoon experiencing some of the rides ourselves. The most popular was the oldest roller coaster in the world. This dipped, climbed and hurtled along undulating tracks its speed controlled by the brake man in the middle of the twenty-seater car. 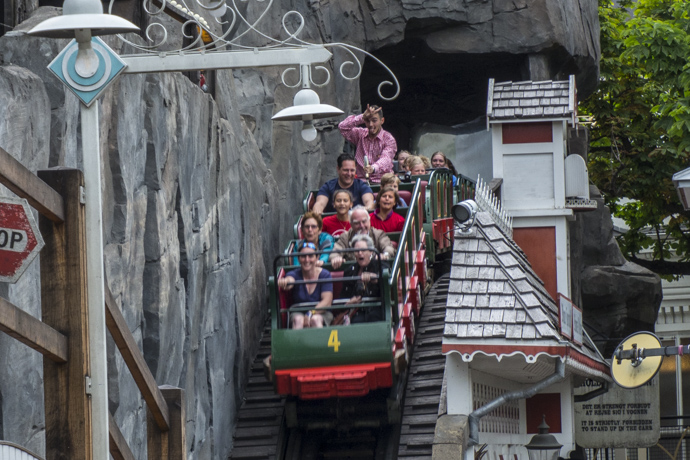 On the Roller Coaster at Tivoli Gardens in Copenhagen, Denmark

Rosenborg Castle is situated in the midst of the King’s Garden featuring parkland, playgrounds and formal gardens. This lovely summer castle is surrounded by a moat and accessed by a bridge across the water. We had a guided tour of the castle – it followed a carefully selected route devised by our excellent guide, Anina. As touching the exhibits was strictly forbidden Anina had put together a bag of tactile objects that she passed around the group. As the clothes of bygone days were described to us some fine lace was passed from hand to hand. While admiring the crowns in the Treasury some tiny pieces of gold were circulating around our group. Having such an enthusiastic guide enhanced the experience for everyone in the group. 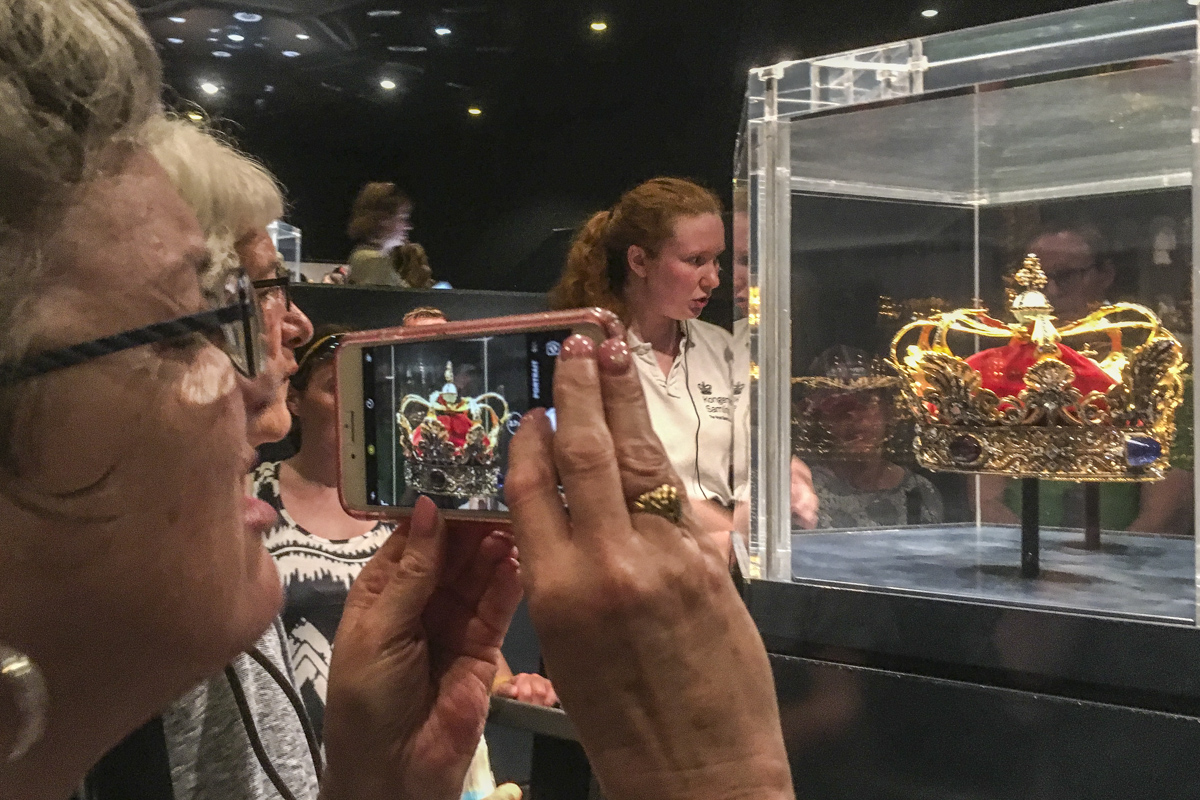 The Treasury at Rosenborg Castle in Copenhagen, Denmark

Mia was our guide in the Botanical Garden and she had also put in a lot of thought regarding the route we too as we walked through the garden. This garden includes a lake, small hills with typical vegetation (the only ones in Copenhagen) and a cluster of historical glass houses dating from 1874 and a beer garden where hops are grown. We started by smelling and tasting some herbs including a ginger flavoured mint plant – it really tasted like ginger and a celery parsley that was a strange sensation. We climbed one of the small hills and stroked the velvety leaves designed to keep an evergreen plant warm in extreme temperatures. We also walked through one of the glasshouses hearing about and touching the different succulent plants in there. We also visited the Butterfly House and finished with a stroll by the lake. All very enjoyable. 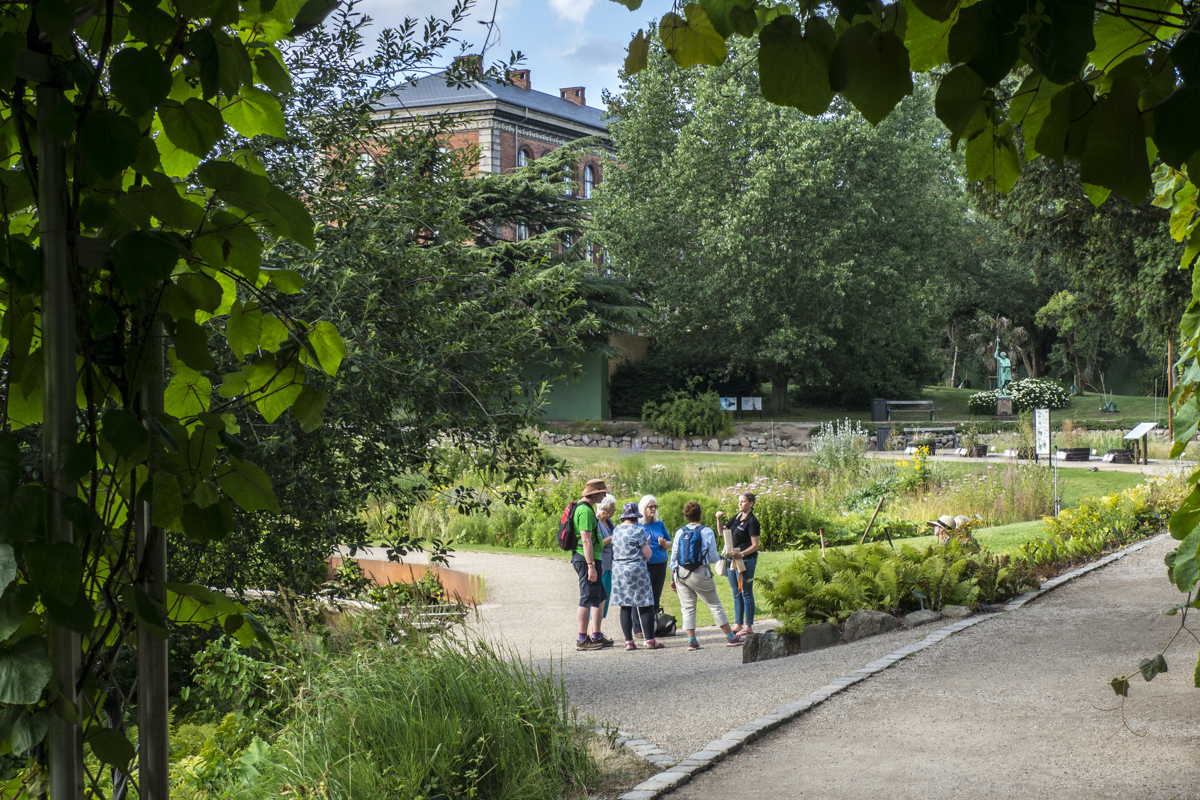 Direct flight from Gatwick to Copenhagen with Norwegian Air.