Two Days in Splendid Sherborne: DayTwo, Around the Abbey

When the Abbey was built in Sherborne it re-defined the course of its history.

It was the crystal waters of the Scire-burne (clear stream) that led Aldhelm, then abbot of Malmesbury, to choose Sherborne as the site for his bishop’s seat, or cathedra. Over the centuries the original church building has been extended and surrounded by a complex of related buildings. Today, many of these buildings have been incorporated into the fabric of town life. 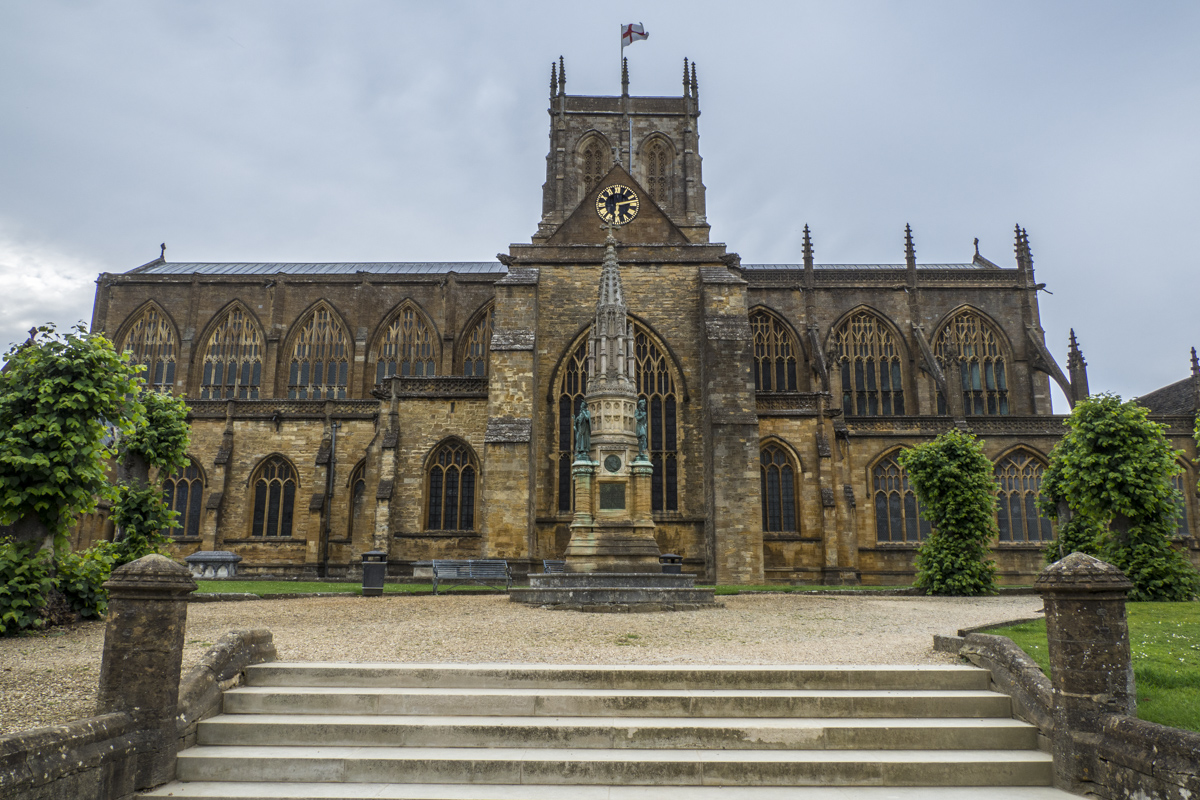 The Abbey in Sherborne, Dorset

The Conduit in Sherborne, Dorset

My first encounter with a building associated with the abbey was the Conduit on the Parade on Cheap Street. This free-standing hexagonal building was originally part of the northern alley of the cloisters in the abbey. It was built as the monks’ washing room. In 1560, twenty-five years after it was completed, it was moved to its present position. It has had a variety of uses including a reading room, a police station and a penny bank. Behind the conduit is the Saint John Building which comprises three separate buildings. The building is owned by Sherborne School. The Bow House (fifteenth century and once part of the East Gatehouse of the Monastery), housed shops for two centuries before becoming the Sun Inn around 1850. The school bought the building in 1916. The ground floor is the staff Common Room and the upper two floors provide accommodation for masters and boys. 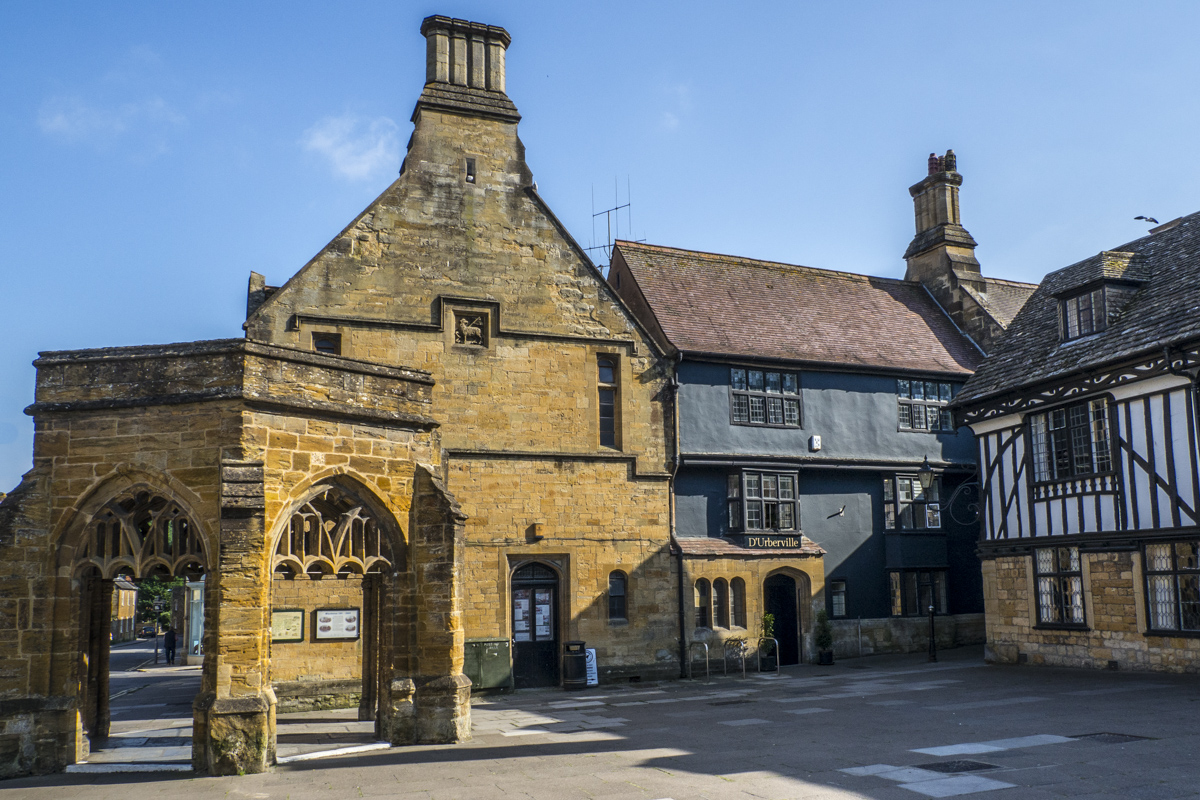 The Conduit in Sherborne, Dorset

The Sherborne Museum in Sherborne, Dorset

Sherborne Museum is next door to the Saint John Building. This museum evolved from the Historical Society opened in 1968 in the Abbey Gatehouse donated to them for this purpose. As the collection of artefacts grew so the museum ran out of space. In 1994 it purchased the shoe shop next door, originally the Almonry of the Monastery. Since then it has acquired additional space in the Conservative Club to store the reserve collections and work on conservation. This small museum is crammed with interesting artefacts. When I questioned the volunteer on regarding some aspects of Sherborne’s history he told me that the history of Sherborne is on its streets to I set off to find it. 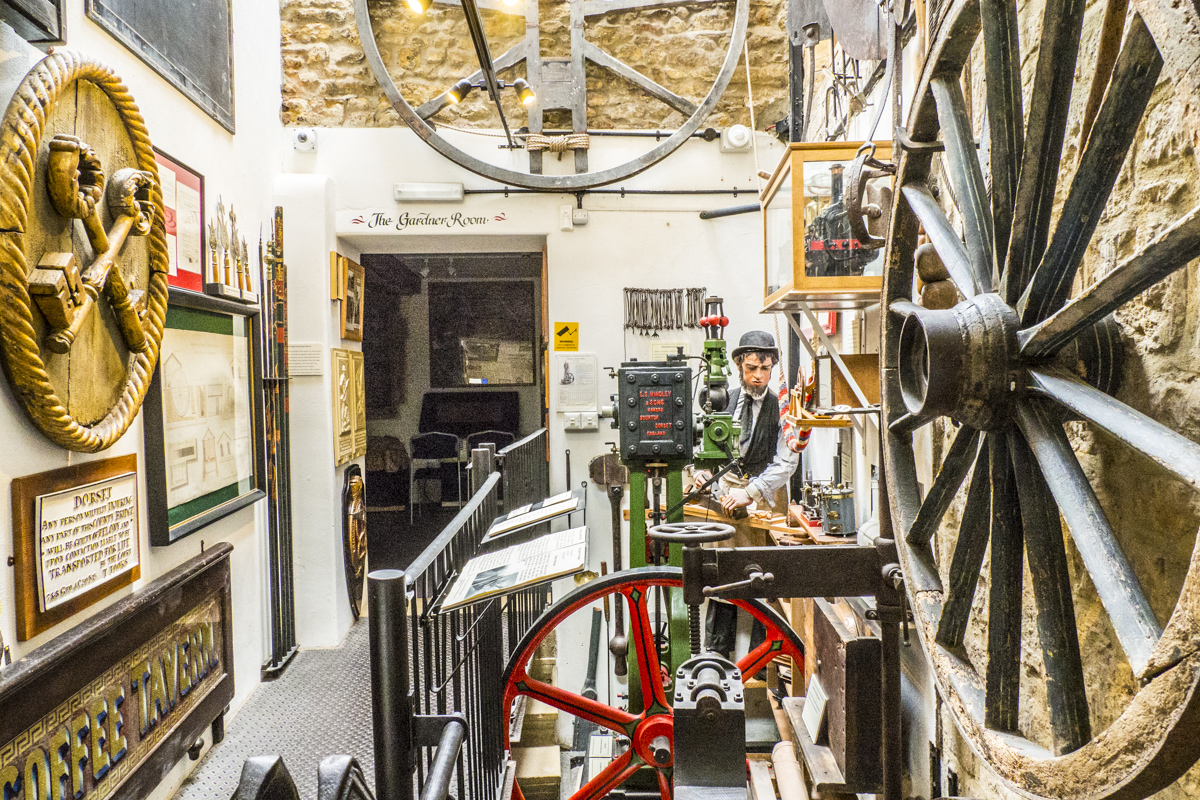 Inside the Sherborne Museum in Sherborne, Dorset

The Cemetery Gate in Sherborne, Dorset

There are no less than 378 listed buildings in Sherborne of which 12 are grade 1 listed. These include the early twelfth century abbey and the fifteenth century cemetery gate also known as the Abbey Gateway. The Cemetery Gate is also part of the Saint John Building. I entered the ecclesiastical area through the cemetery gate and was enchanted by my first sight of the abbey glowing golden in the late afternoon sun. The lawn in front of the abbey was once its cemetery hence the name of the gate. 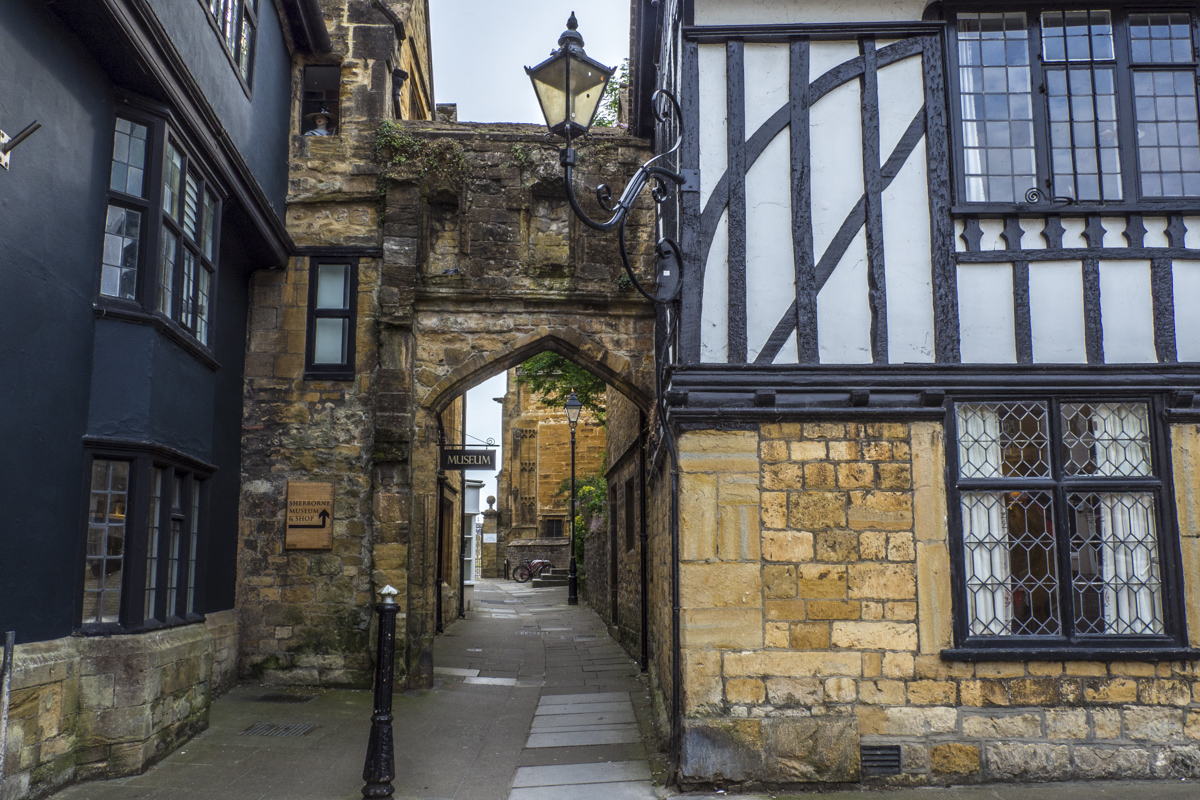 The Cemetery Gate in Sherborne, Dorset

The Abbey in Sherborne, Dorset

Sherborne Abbey was originally built to serve the Diocese of Sherborne. This was created in AD 705 when the great Diocese of Winchester was divided in two, and Aldhelm, Abbot of Malmesbury, was appointed as the first Bishop of the West Saxons. This new Cathedral served St Aldhelm and twenty-six succeeding Saxon Bishops. Some important early features can still be seen such as the Saxon doorway. When the Bishop’s seat was moved to Salisbury, the secular canons left and monks of the Order of St Benedict moved in. They stayed there until the dissolution of the monasteries in 1536 when they surrendered to King Henry VIII. Thanks to the intervention of one … Horsey the abbey was not destroyed. He bought it and later sold it back to the town – at a profit. Relations between the town and the monks had not been good. The monks built the Church of All Hallows, joined to the West End of the cathedral for the use of the people who lived in the town. When the monks left they pulled this church down but there is still evidence of its existence at the West End. The status of the abbey was reduced to parish church although it is still referred to as the abbey. 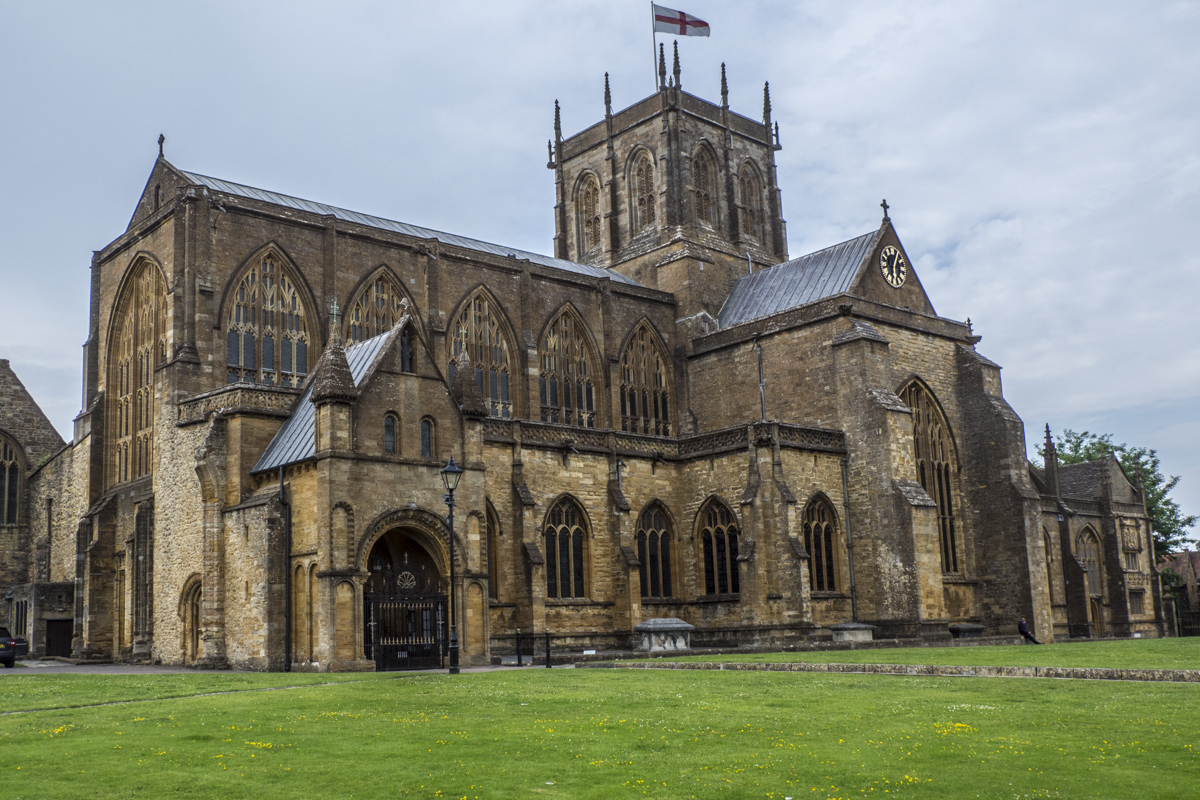 The West End of the Abbey in Sherborne, Dorset

In front of the abbey are the “ St John’s Almshouses. Funded by donations from benefactors the building was completed in 1448. This original building consisted of a chapel and communal dining room on the ground floor and rooms on the first floor. These rooms were accessed by an external staircase. Accommodation was initially provided for twelve men and five women who were required to wear cloaks and hats. Potential residents had to gift something to the almshouses (in order to furnish them) and this was how they acquired the tryptic of the Dutch school that is on display above the altar in the chapel. The additional almshouses and cloisters were added in Victorian times and blend in really well. The external staircase was enclosed at this stage. Today the residents are still provided with all their meals in the communal dining room but no longer have to wear uniforms. The chapel (restricted opening times) is well worth a visit. 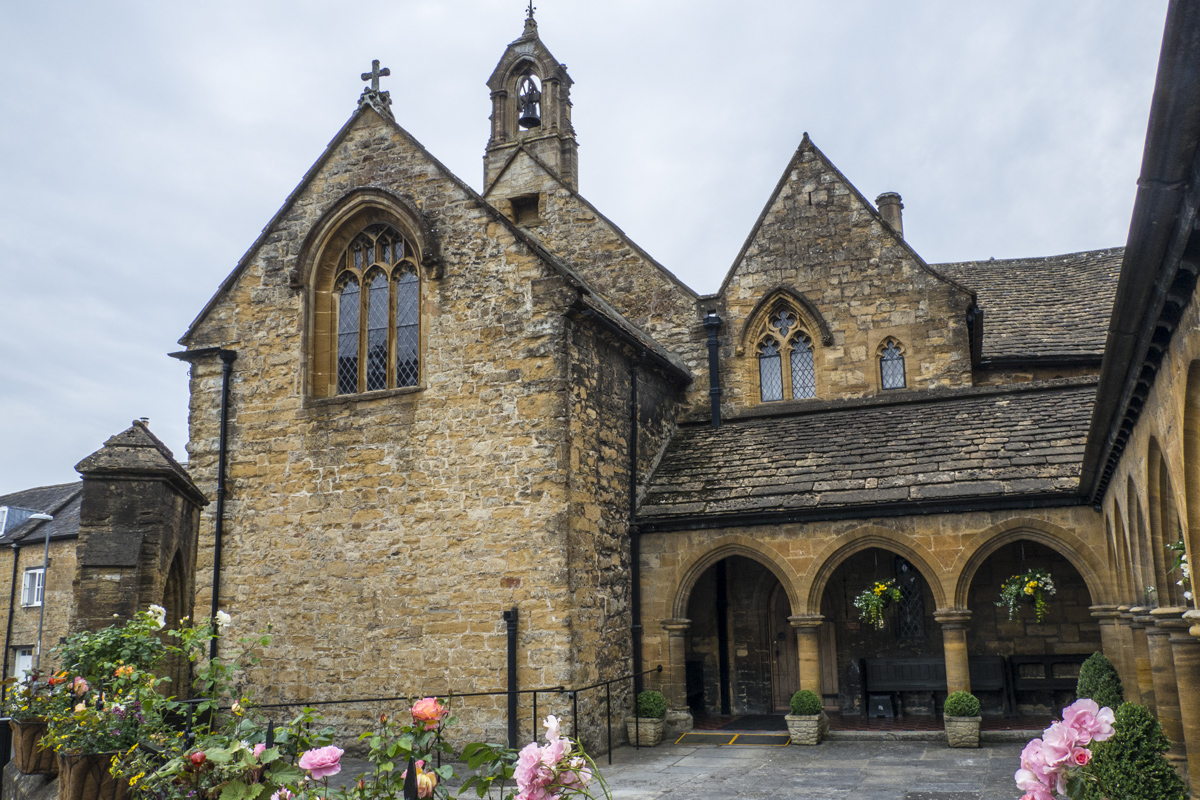 A cluster of buildings belonging to and still used by Sherborne School are found behind the abbey. During term time it is very difficult to explore these buildings as security is very strict due to the large number of international students here. Their presence does bring a buzz to the town and visiting parents boost the number of tourists here. The students and the locals come together at the Hub opposite the Sherborne School Sports Centre in the midst of the school campus. This large café offers a wide variety of dishes and a congenial atmosphere. I indulged in an excellent Dorset cream tea here while learning more about the history of the school. Although there is some doubt about the actual date when the school was founded it definitely dates back to medieval times when it is known there was a school for boys at the abbey. Today, there is also a school for girls. It was established by Kenelm and Charlotte Wingfield Digby a member of the Digby family (owners of Sherborne Castle) at the end of the nineteenth century. The school originally occupied Ransam House. It is now housed in various premises around the town. 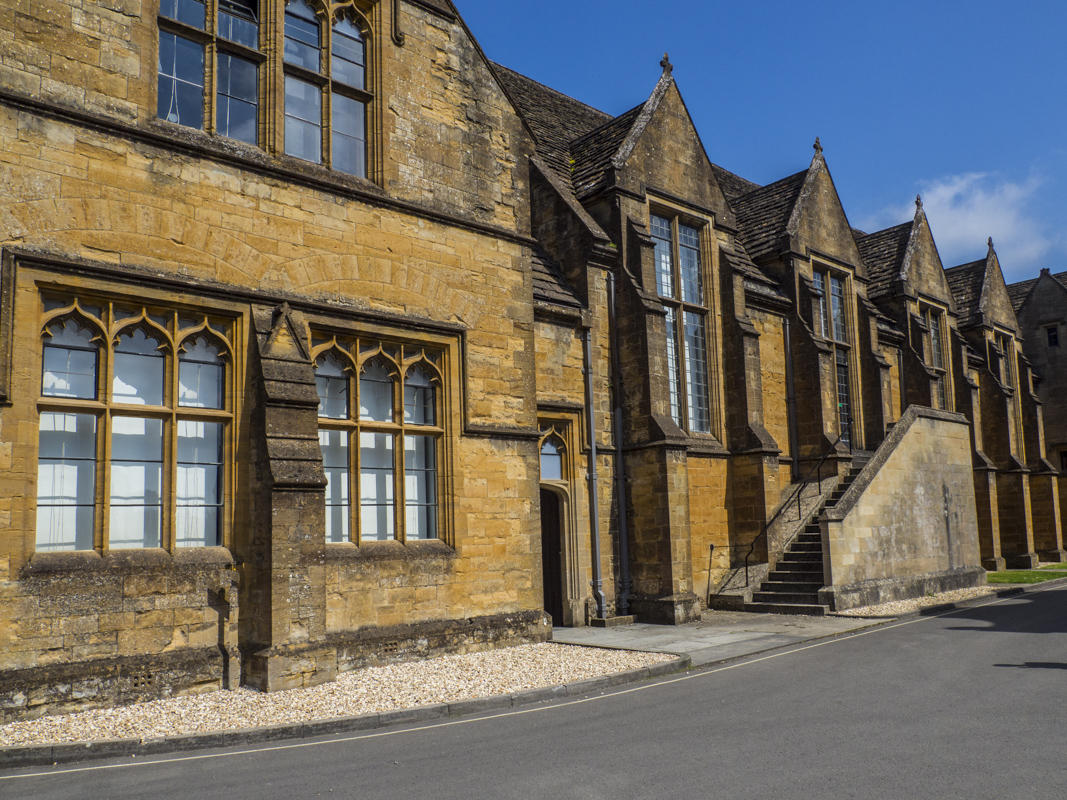 I re-entered Cheap Street through the grounds of the Cheap Street Methodist Church next door to the main buildings of Sherborne School. This church and its Sunday School was founded by Mr William Dingley. Originally his church occupied a large outhouse he acquired and converted into a chapel. In 1841 the present church was built in the Gothic style and has not changed much since then. But, the original Sunday School was sold to Sherborne School and now operates as the Powell Theatre. 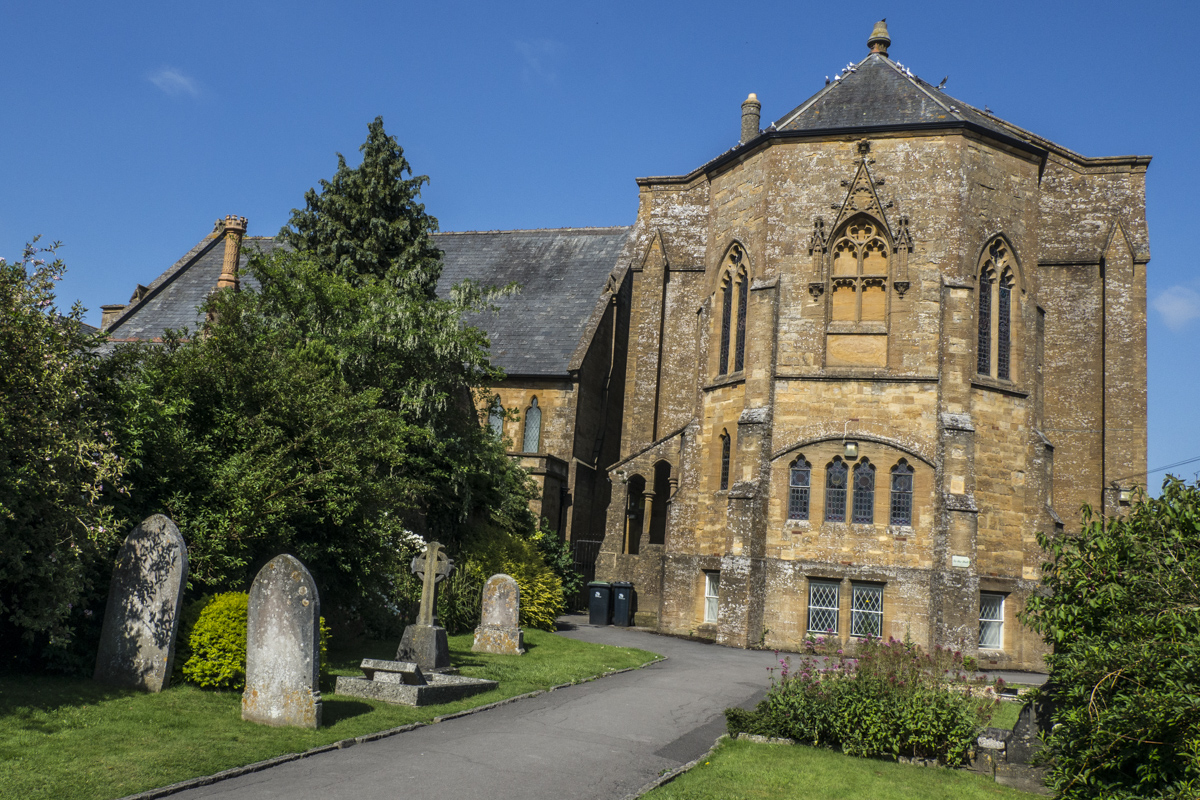 Visitors to Sherborne should take time to stroll down Cheap Street, the town’s high street. Take time to browse the independently owned stores many of which are housed in historical buildings. Pedestrianised during the day this street is an architectural showcase and has been featured in a delightful article in the Telegraph. My favourite buildings on this street include numbers 36 and 38 a late medieval timber-framed building now occupied by a silversmiths and a dress shop and Abbey Lands, an Elizabethan building now used as a boarding house by Sherborne School. 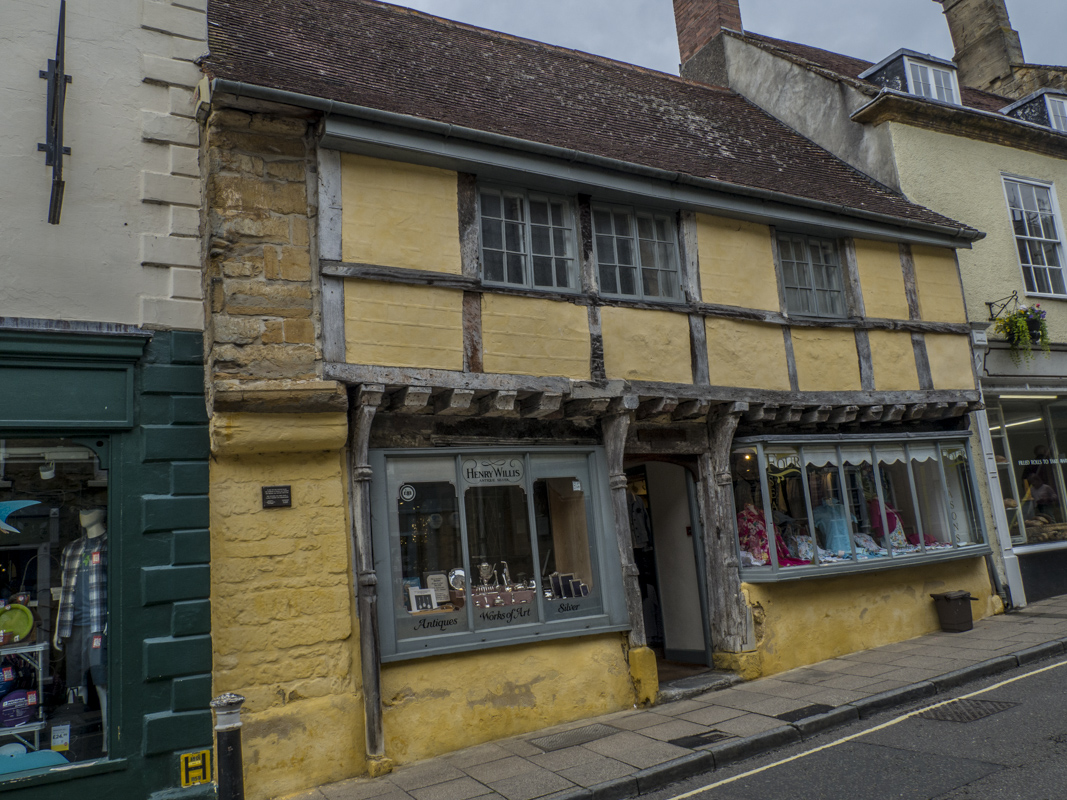 The Green in Sherborne, Dorset

The top of Cheap Street opens out into an area known as the Green. There are some very interesting buildings around this open space. On one side is an interesting group of three buildings. It comprises the former hospice of Saint Julian, The George, Sherborne’s oldest public house complete with the archway to accommodate coach and horses and 3 Cheap Street currently occupied by the estate agents Greenslade Taylor Hunt. On the other side is a mansion that once belonged to the owner of a silk mill. Silk https://www.sherbornemuseum.co.uk/silk.php brought prosperity to Sherborne. When it was no longer viable due to the introduction of artificial fabrics they started making fibre glass and is still the home to the leading manufacturer in this field. 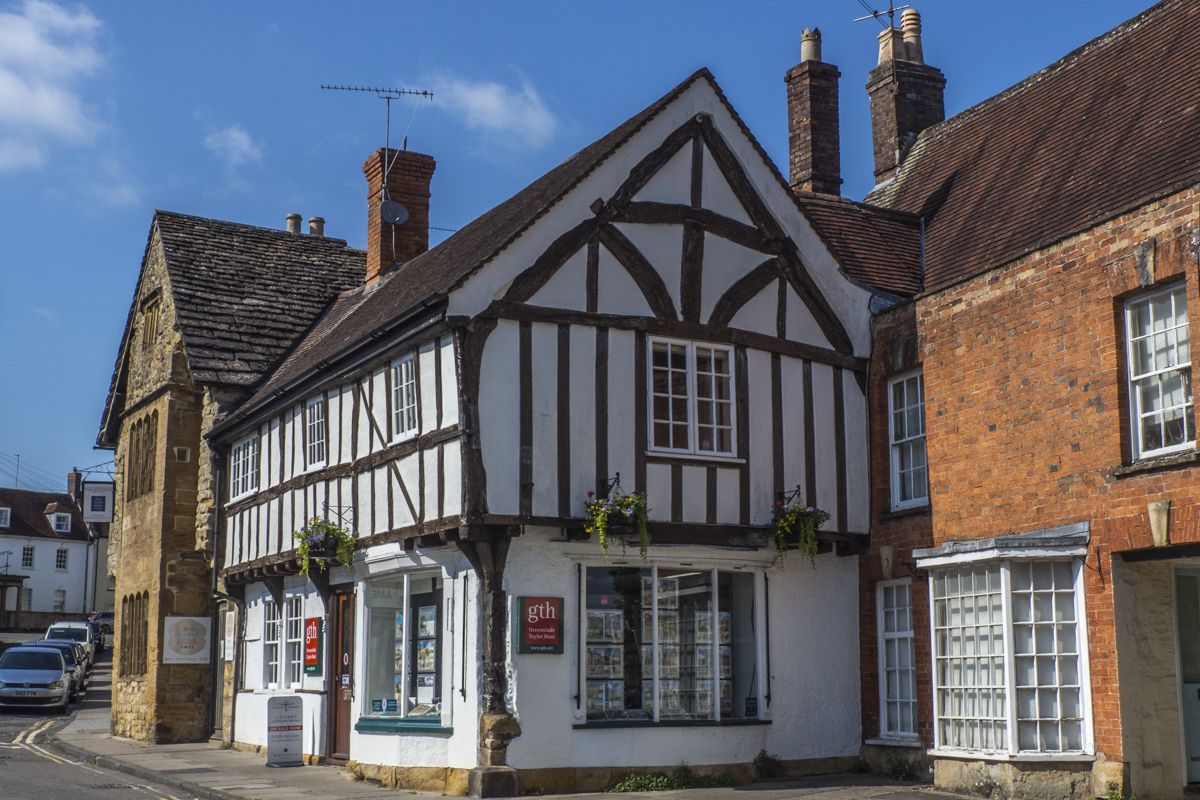 The Green at the top of Cheap Street in Sherborne, Dorset

I finished with a restful break in the pretty Paddock Gardens overlooked by Sherborne House once the owner of these public gardens. This Grade 1 listed building is currently empty but the recently approved Paddock Project my result in a change to its fortunes. Watch this space.

Ideally situated close to the centre of Sherborne the Eastbury Hotel offers a relaxing retreat from the busy lives we lead. After exploring the local attractions guests can relax in the tranquil walled garden at the back of the hotel. Two cosy lounges are available should the weather be unfavourable. 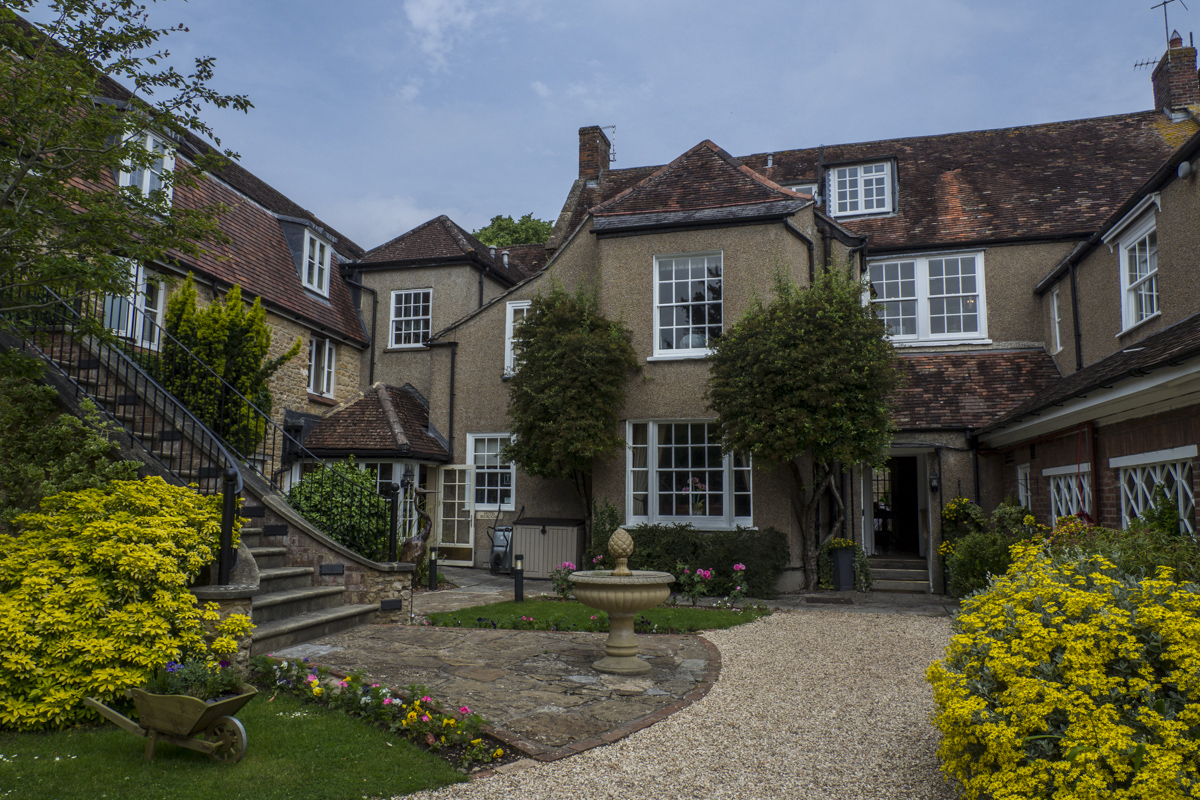 The hotel offers a variety of rooms including bedrooms in the main building and suites outside in the garden. A new addition, in the summer of 2019, will be five Victorian Potting Shed suites in a quiet area of the garden. All the rooms and suites are elegantly furnished and well-equipped. Reception rooms include two small cosy lounges.

Lounge in the Eastbury Hotel in Sherborne, Dorset

Facilities include a lovely walled garden where guests can simply sit back and relax or enjoy a variety of games. The terrace outside the Seasons restaurant is the perfect place for a pre-dinner cocktail before enjoying a delicious meal prepared by chef Matt Street.

Stunning Cheese Brûlée Starter in the Seasons Restaurant at the Eastbury Hotel in Sherborne, Dorset

I felt very welcome here and enjoyed my stay. I wished I could have spent more time enjoying the lovely garden but there is just so much to see in Sherborne …