The traditional Cornish village of Mullion is situated at the confluence of three small valleys that open out into three pretty coves on the Lizard Peninsula in Cornwall.

In spring and early summer, a riot of colourful wild flowers tumbles over the cliff tops on the coastline of the Lizard Peninsula and dip and sway on the verges of the narrow lanes that weave their way across it. It is no wonder this stunning area of Cornwall has been designated an Area of Outstanding Natural Beauty and Mullion lies right at the heart of it. 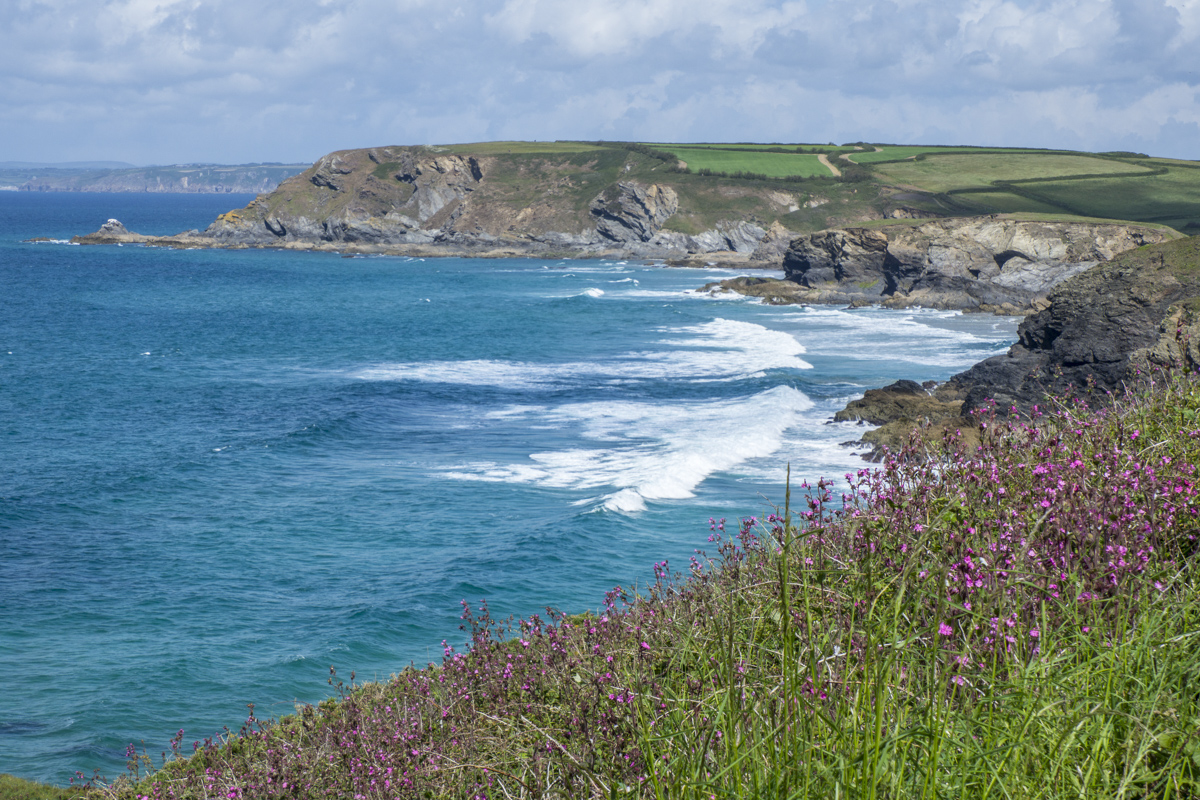 The Coastline of the Lizard Peninsula in Cornwall

Mullion Village on the Lizard in Cornwall

Mullion is the best place to stay for those wishing to enjoy the extraordinary beauty of the Lizard Peninsula which boasts lovely, sandy beaches in sheltered coves and a huge variety of wild flowers including some that are unique to the peninsula. A large and interesting population of birds inhabit the cliffs and offshore islands and seals and basking sharks occasionally pass by. The centre of the village is a short distance inland and features a variety of local shops, restaurants and the highly recommended Ann’s Pasties a traditional dish made from local ingredients. Some interesting old buildings such as the old Post Office and the Reading Room are now in private occupation. The village has three churches, the pretty Roman Catholic Church on its perimeter, the flint stone Methodist Church and the lovely thirteenth century church of Saint Mellanus. 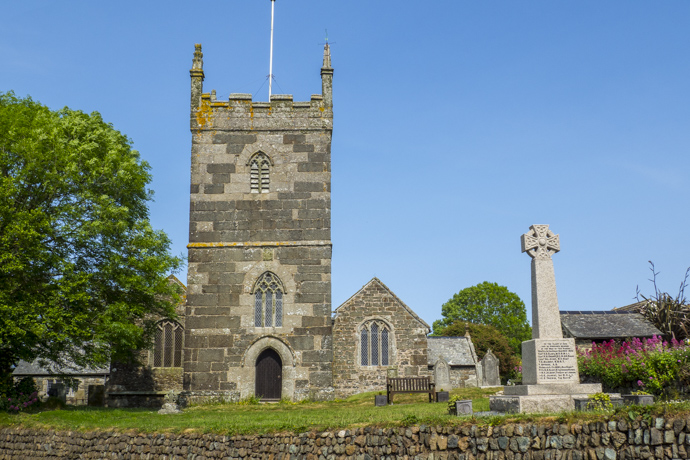 Inside visitors can admire the scenes from the bible carved into the wooden pew ends. There is a ‘dog door’ set into the thirteenth century south door – it seems the current trend for dog friendly churches is not a new idea. The north door may date back as far as the eleventh century as it is held together with wooden pegs. The roof of the nave was probably made with timbers from Goonhilly Forest that spread across the Goonhilly Downs during the late medieval period. Due to the presence of the church the village used to be called Mullion Churchtown, now, it is simply Mullion. 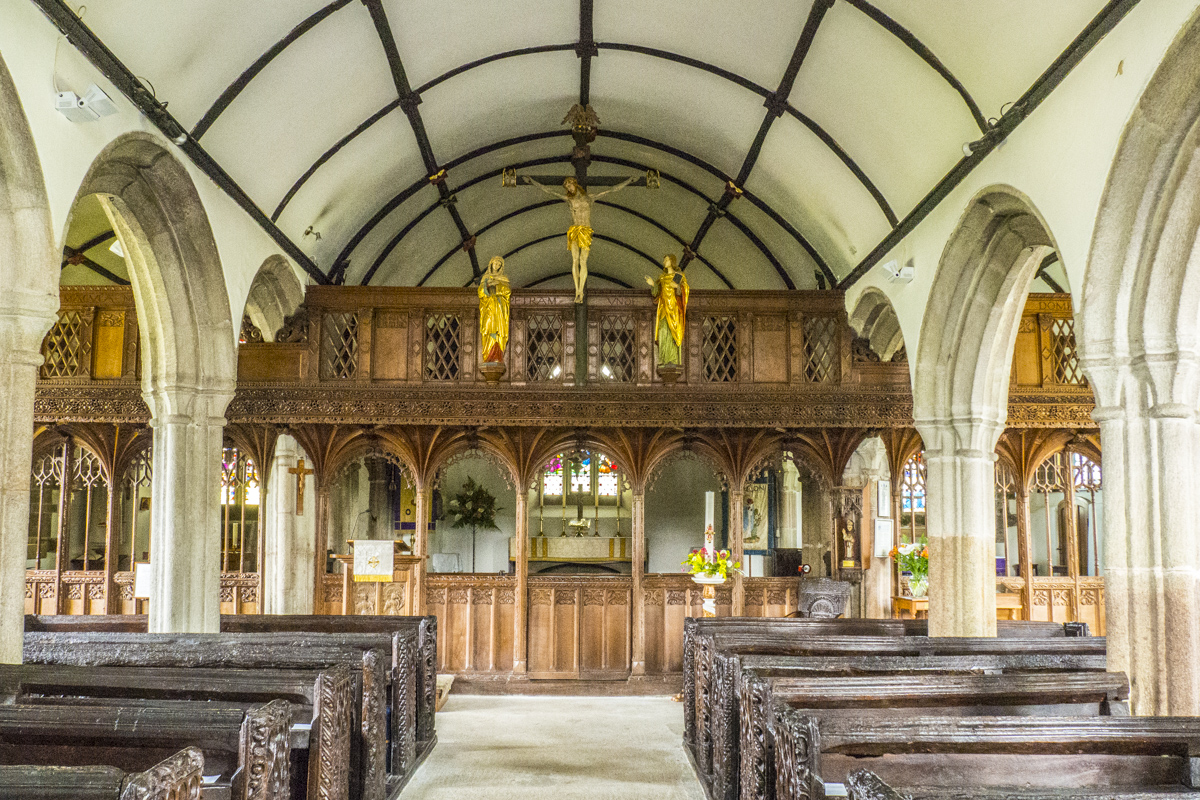 The Chocolate Factory on the Lizard in Cornwall

Between Mullion village and its small port in Mullion Cove is the Chocolate Factory and Craft Centre. Open all year, this attractive little centre features a unique range of attractions. These include a small flock of llamas; the art gallery, Gallery Anthony where local artists exhibit their work and art classes and demonstrations are held; the Mullion Glass Studio and a variety of speciality shop including the Mullion Mades with its wide range of hand-knitted and crocheted items and handicraft supplies. Drawn towards the Chocolate factory by the subtle aroma of chocolate visitors can learn how Trenance Chocolate is made before being tempted by a multitude of different sweet treats in the adjacent shop. Before moving on enjoy a coffee or ice-cream in the Coffee Shop. 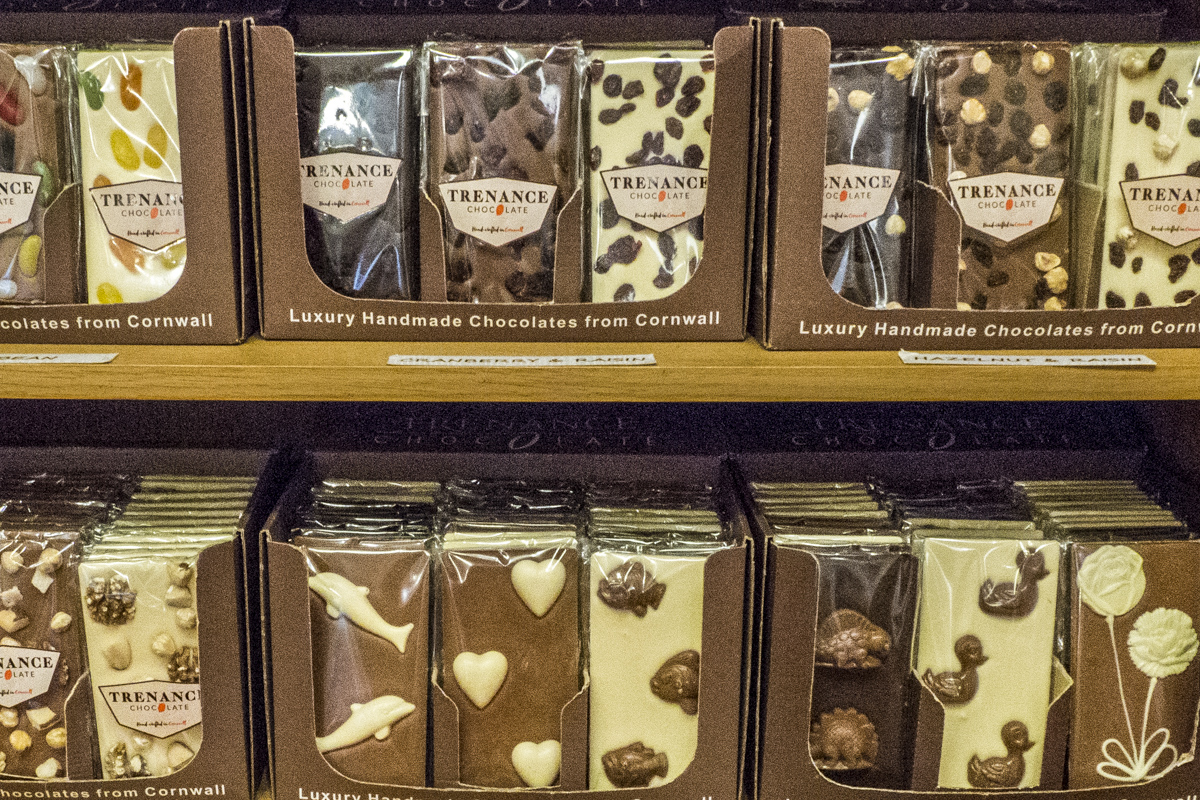 Mullion Cove on the Lizard in Cornwall

Mullion Cove also known as Porth Mellin is about one mile from Mullion Village. It is also on the South West Coast Path that winds its way along the coasts of Cornwall, Devon and Dorset. A pilchard fishery developed here during the eighteenth century due to the slight shelter afforded by Mullion Island just offshore. The fishermen would haul their boats clear of the sea using the communal winch in the picturesque Winch House. The café and the harbour master’s house used to be a pilchard cellar. Opposite the café are the remains of a Second World War II anti-tank wall. The uncertain income from fishing was supplemented by a regular income from smuggling. Many ships were wrecked on the dangerous rocky coastline around the cove. Although the cove had a lifeboat station from 1867 to 1909 it was rarely able to be of assistance. In forty-two years there were only three successful launches due to severe weather often experienced here. The two stone piers were built in 1887 – 1895. They were financed by Lord Robartes of Lonhydrock as an act of benevolence following the failure of the pilchard fishery. Mullion Cove and Mullion Island were given to the National Trust in 1945 by Montagu Meyer. 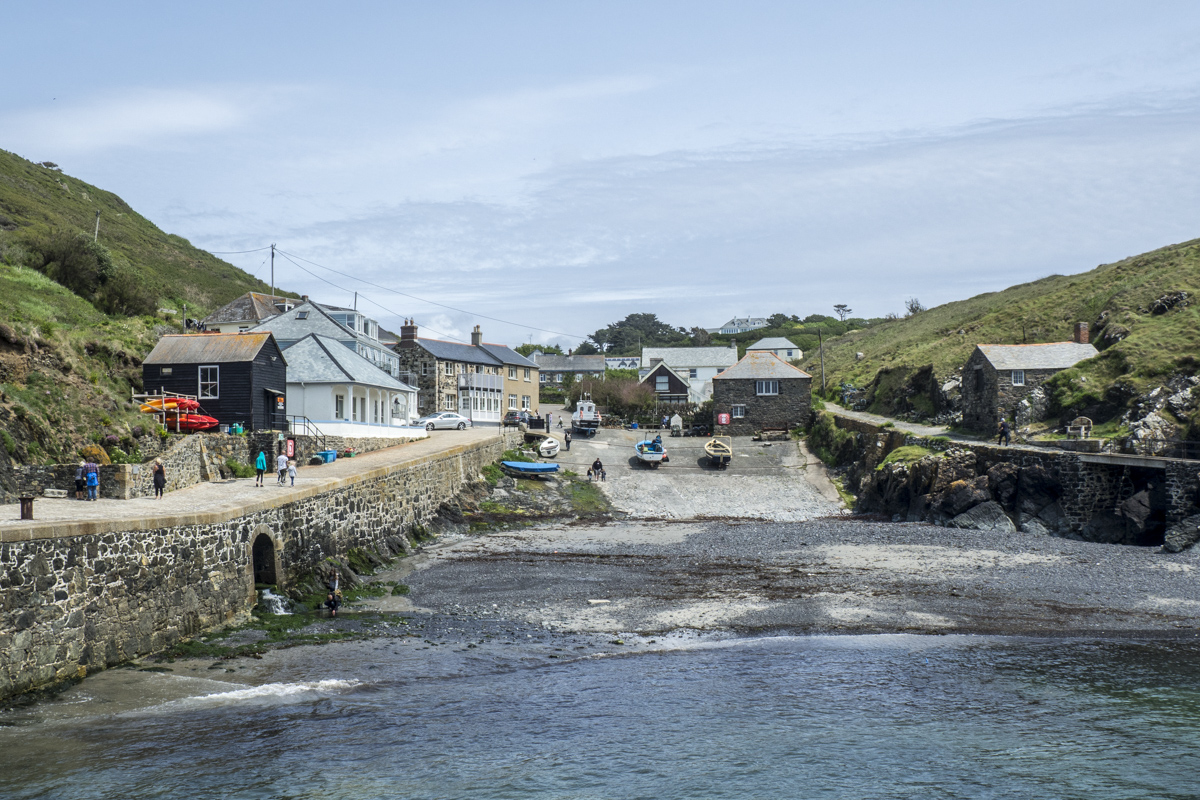 The two stone piers that form the harbour in Mullion Cove were built in 1887 – 1895. They were financed by Lord Robartes of Lonhydrock as an act of benevolence following the failure of the pilchard fishery. Shell fishing was encouraged following the construction of the harbour. Today the harbour still supports a small fishing community with a few boats catching mainly shellfish – crabs, lobsters, and crawfish. Mullion Cove and Mullion Island were given to the National Trust in 1945 by Montagu Meyer. The National Trust has spent a lot of money on the maintenance and repair of this exposed harbour that is regularly battered by severe storms. 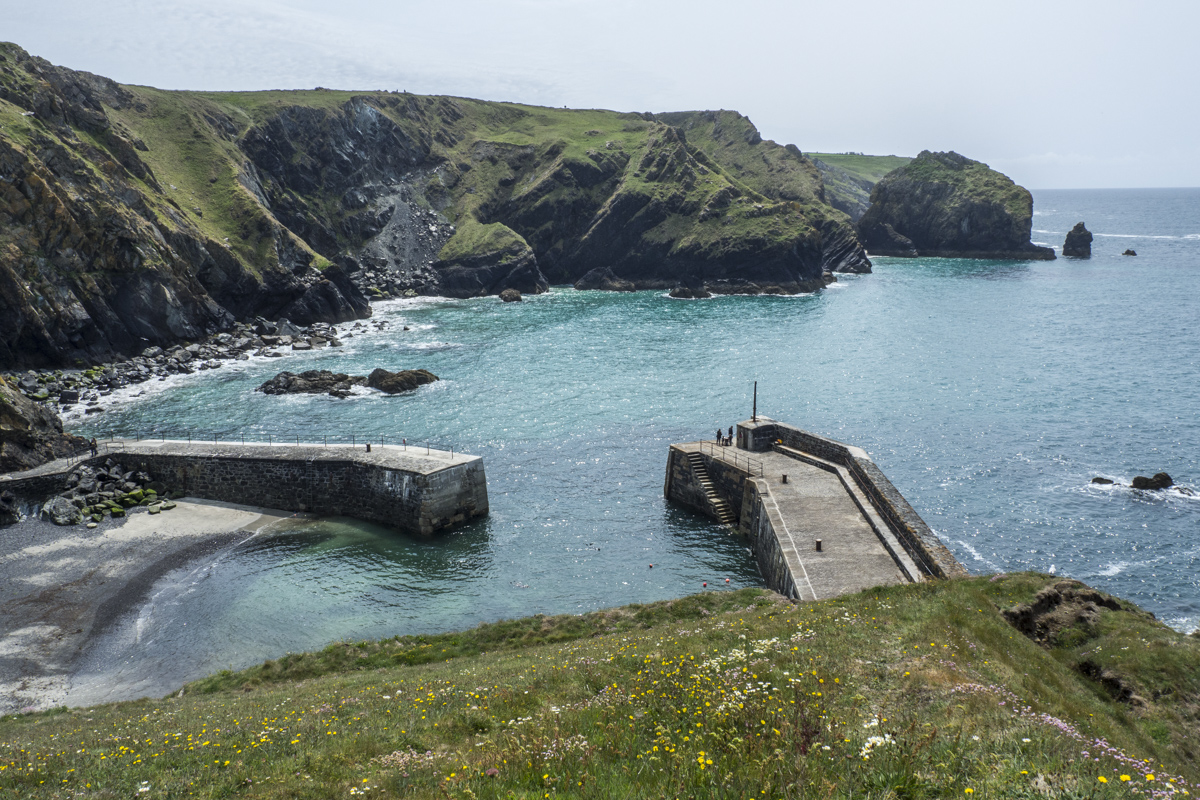 The Harbour in Mullion Cove, the Lizard, Cornwall

The delightfully old-fashioned Porthmellin Tea Rooms serves was doing a brisk trade when I arrived after a refreshing stroll along both arms of the harbour. Their fresh crab sandwich had been recommended to me and I was not disappointed. It seemed as though a whole, fresh, luscious crab had been sandwiched between two slices of fresh bread – scrumptious. 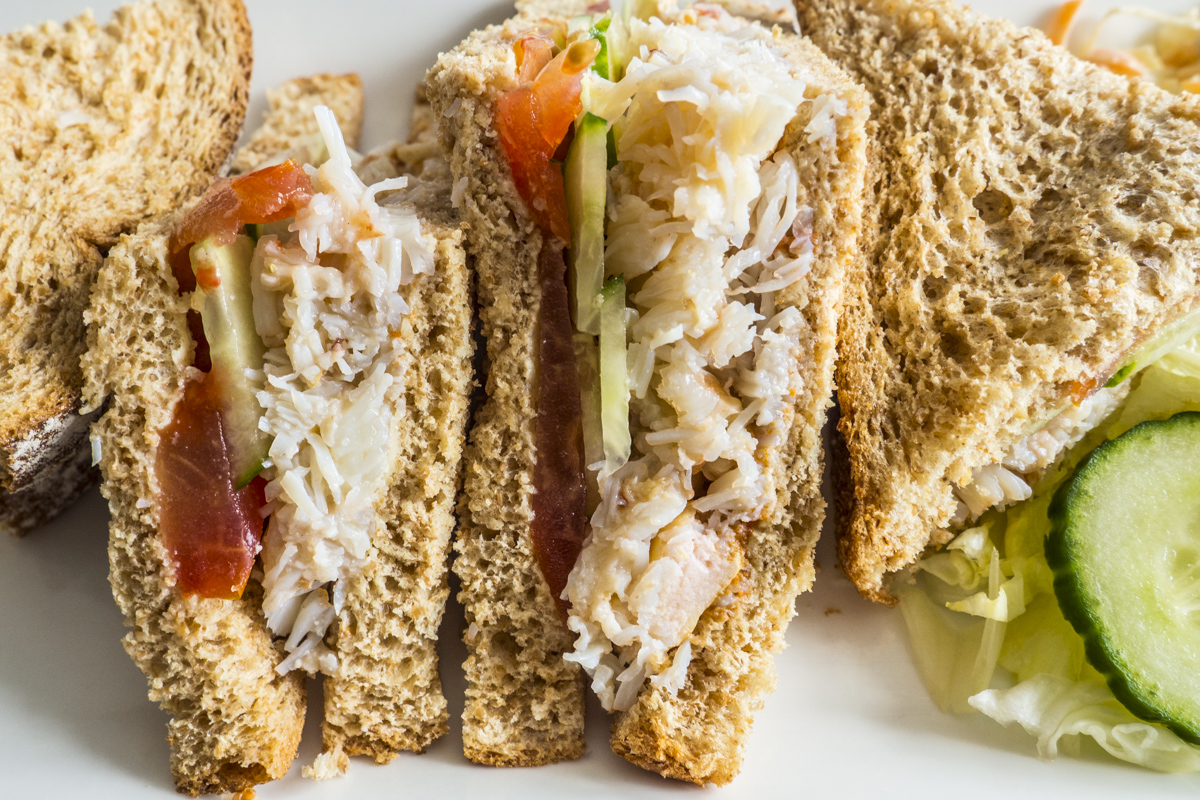 Crab Sandwich at the Porthmellin in Mullion Cove, on the Lizard, Cornwall

Polurrian Cove on the Lizard in Cornwall

Mullion Cove is not the closest cove to Mullion village, Polurrian Cove, a short distance along the South West Coastal Path is closer. It is easily accessible from the centre of Mullion Village and there is also a bus stop for the local bus service nearby. This small cove has a glorious, golden sandy beach which is reached by a gently descending path. Shade is provided by rocky outcrops at either end of the beach but there are no other facilities so it does not get too crowded in summer. 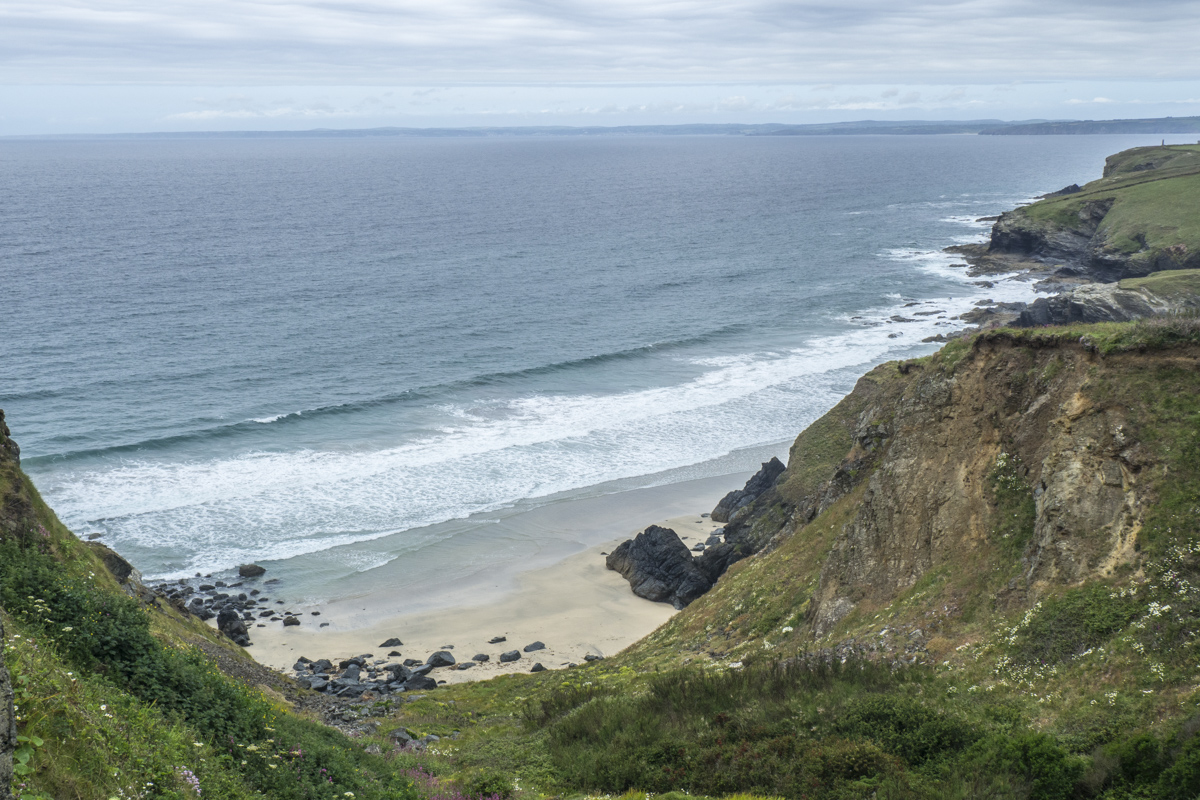 Polurrian Cove on the Lizard in Cornwall

Poldhu Cove on the Lizard in Cornwall

Further along the South West Coastal path is the stunning Poldhu Cove. This path forms a crescent around the village of Mullion and Poldhu is the third of three easily accessible coves along the path. Poldhu is very popular as it is on the route of the local bus service has a café and shop right on the beach. 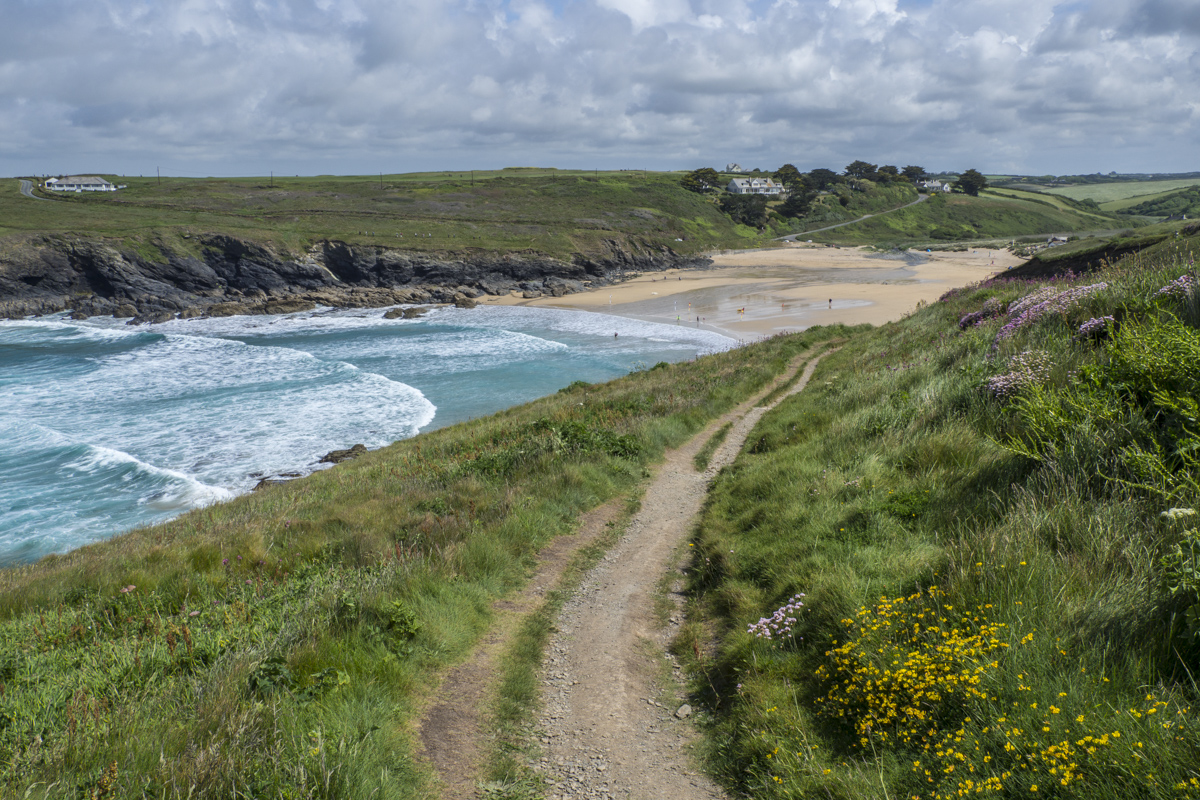 The Path to Poldhu Cove on the Lizard Peninsula in Cornwall

Marconi in Poldhu Cove on the Lizard in Cornwall

Mullion also has a place in history. It was here, near Poldhu Cove, that Guglielmo Marconi’s sent the first transatlantic wireless signal in 1901. This momentous event is commemorated by a memorial on the South West Coastal Path between Polurrian Cove and Poldhu Cove. This Grade II listed granite ashlar column was erected by the Marconi Company of London in 1937. There are four plaques on the plinth each one detailing the work of Marconi and his experiments at the Poldhu Wireless Station between 1900 and 1933. 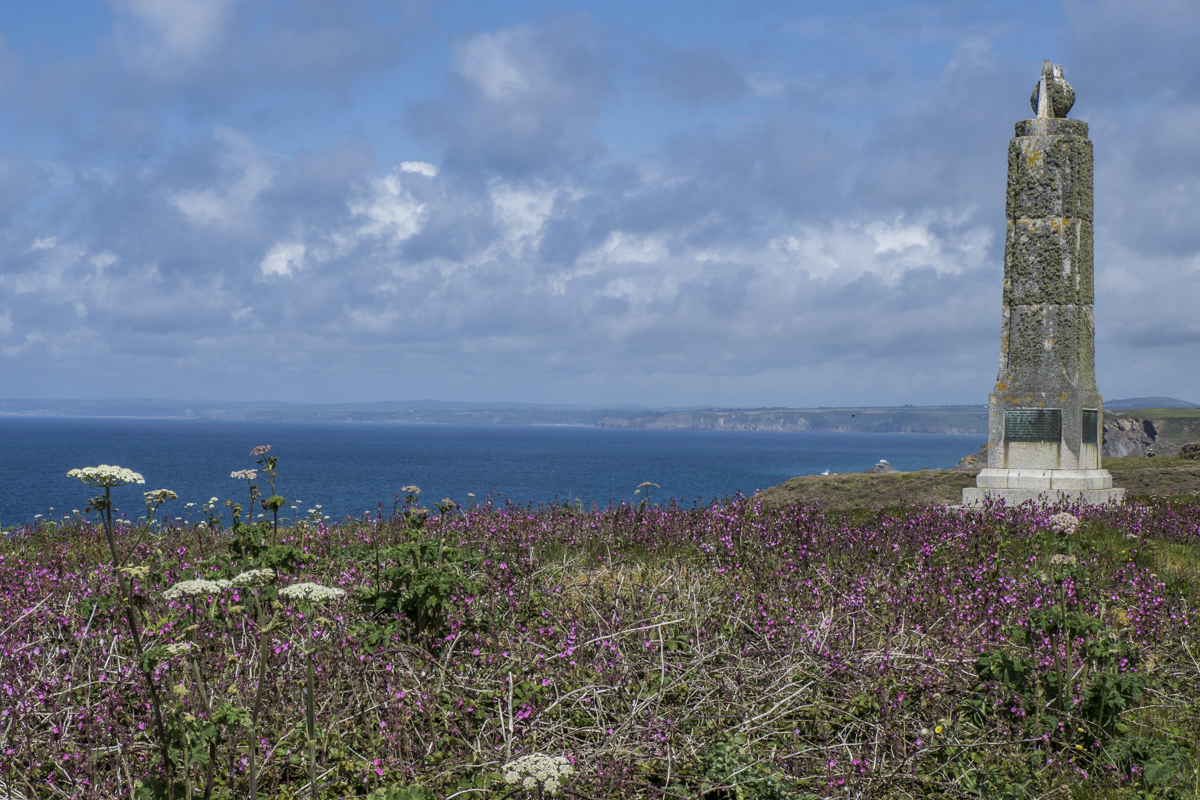 Marconi Monument at Poldhu Cove on the Lizard Peninsula in Cornwall

The wireless station, a short distance from the memorial, has been restored to look as it would have done in Marconi’s time. Now known as the Marconi Centre its small museum is open on a regular basis between Easter and October. 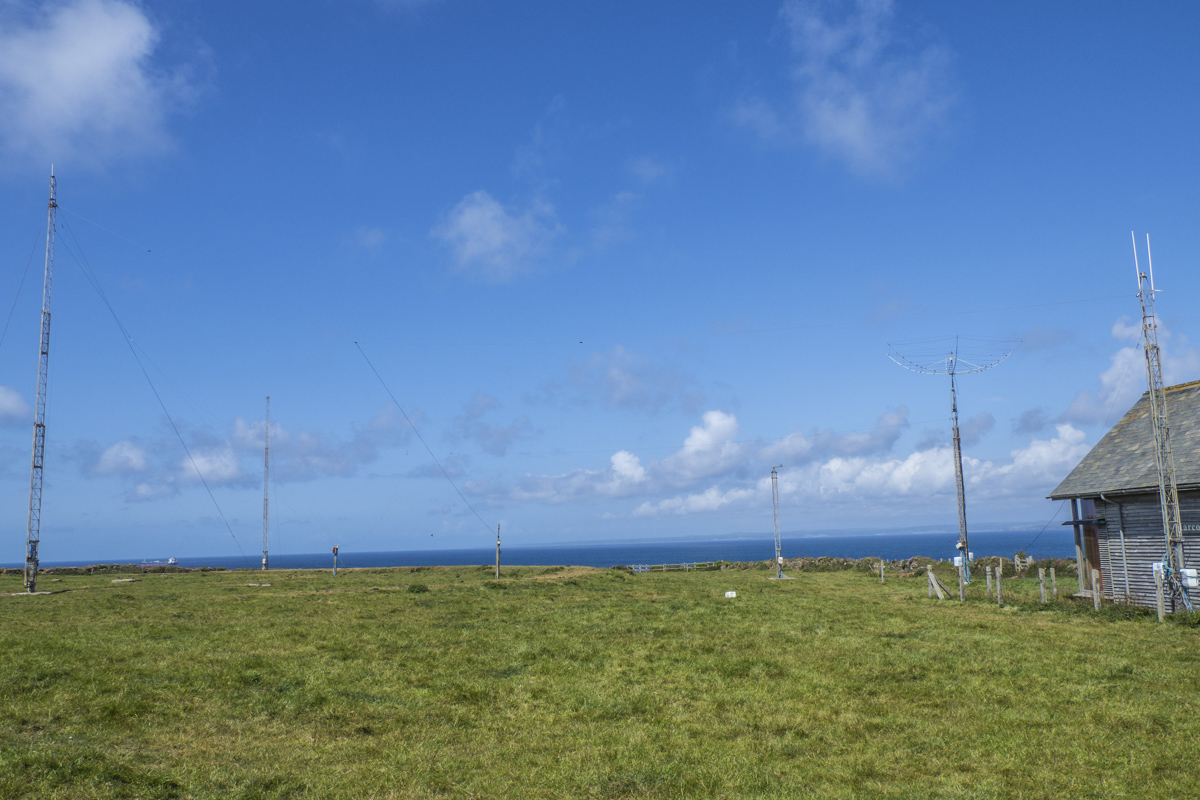 Where to Stay in Mullion on the Lizard in Cornwall

While visiting Mullion I stayed at The Polurrian. This lovely hotel is beautifully positioned on the cliffs above Polurrian Cove, a few minutes’ walk from the shops in the village. It offers well-appointed, comfortable bedrooms in the main building and self-catering villas and a self-catering cottage close by. The hotel is surrounded by lawns and gardens where guests can relax and enjoy the wonderful coastal scenery around them. Ideal for walkers and nature-lovers, it is connected to the South West Coast Path. The restaurant here offers an interesting selection of dishes cooked on a wood-fired oven. 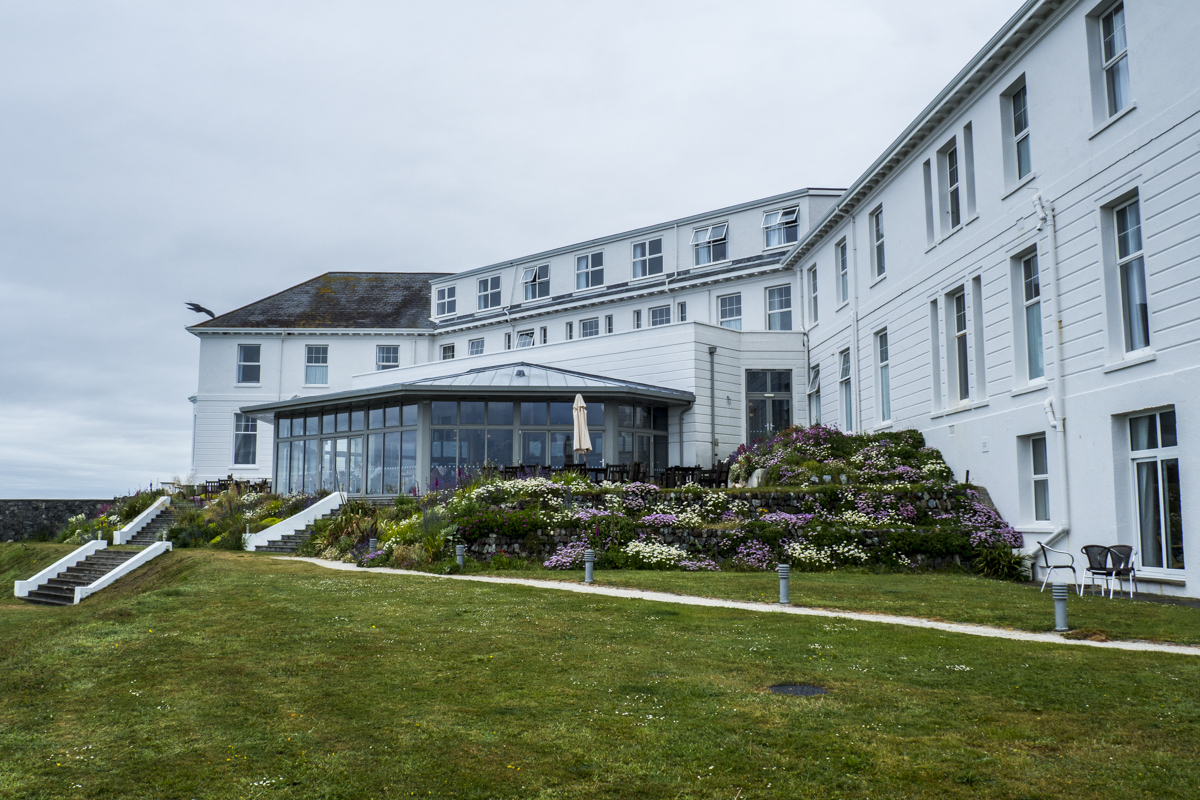 The Polurrian in Mullion on the Lizard Peninsula in Cornwall

Regular train services from London Paddington to Redruth then take the L1 bus to Mullion. By car the quickest and easiest route from London is via the M4, M5 and A30.