Hampshire has been renowned as the hunting ground of the upper classes since the time of William the Conqueror. Mansions, manors, priories and fishing lodges surrounded by large estates were once abundant in this area.

Every home bears the stamp of its owner and this is particularly true of many grand houses whose previous owners have toyed with architectural styles, developed grand interiors or simply preserved its original beauty. Today there are some wonderful examples of historic houses that are open to the public. Hillier Gardens, Houghton Lodge, Mottisfont Abbey and Hinton Ampner are four lovely examples of times gone by. The three former properties are found in the Test Valley. An area famous for fly fishing in its chalk streams and vineyards on its chalk-based terrain. The fourth is in neighbouring East Hampshire. 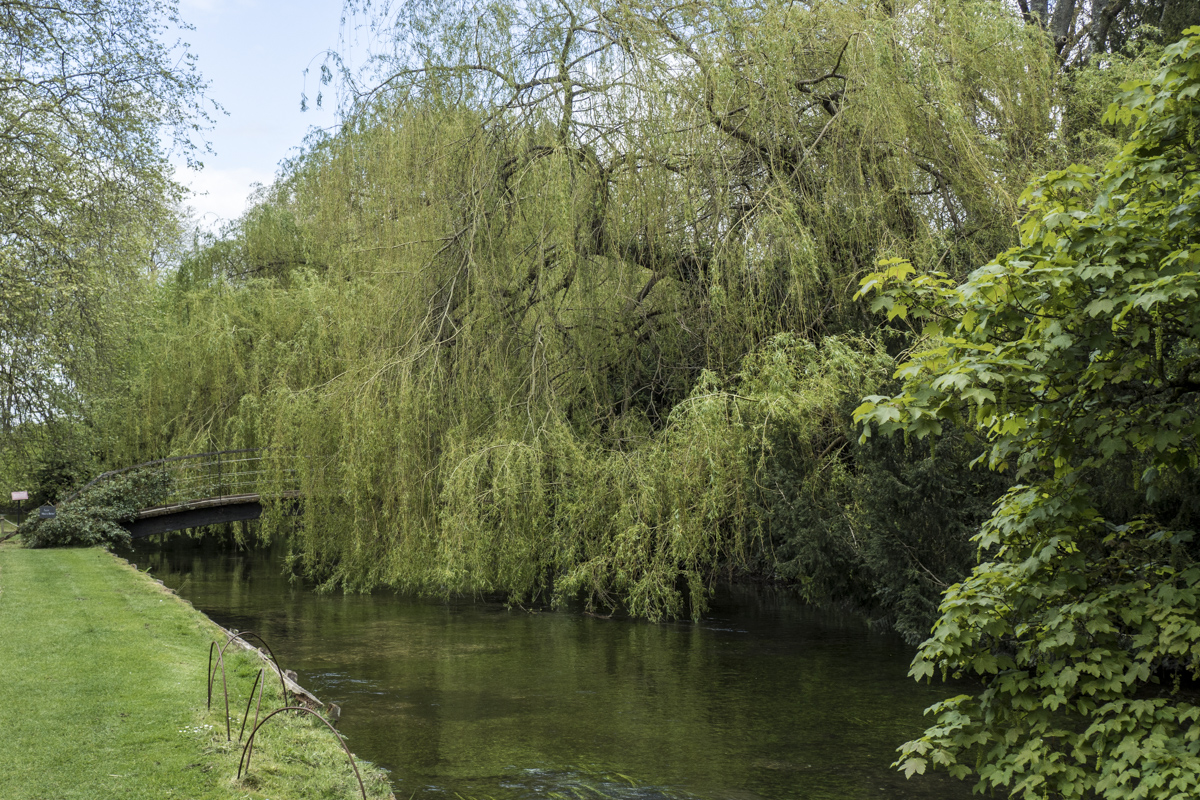 Hillier Gardens in the Test Valley

When Sir Harold Hillier took over the already flourishing Hillier nursery and florist business in … he realised that gardening was about to become more hands on for the people living in the many new post-war housing developments. Due to the rapid growth of the mail order business the nursery soon became a nationwide concern. Sir Harold was a connoisseur of plants and his ambition was to establish a garden and arboretum dedicated to temperate zone ‘woody’ plants. When he bought Jermyn’s House in 1951 it was surrounded by paddocks and fields, once part of the vast medieval Fleming estates known as the Manor of Romsey Extra. There has been a house on this land since 1724, probably built by a Farmer Jarman. After the property was used as a smallpox hospital in the latter part of the eighteenth century it passed through a series of private owners until Sir Harold bought it at auction in 1951. He moved his family into the house and established his garden and arboretum around it. In 1977 he gave his now famous and award winning Sir Harold Hillier Gardens Hampshire County Council to be held under their sole trusteeship. Today the gardens are still flourishing, a wonder memorial to Sir Harold Hillier who died in 1985. Jermyn’s House is now occupied by administrative offices and a tea room. 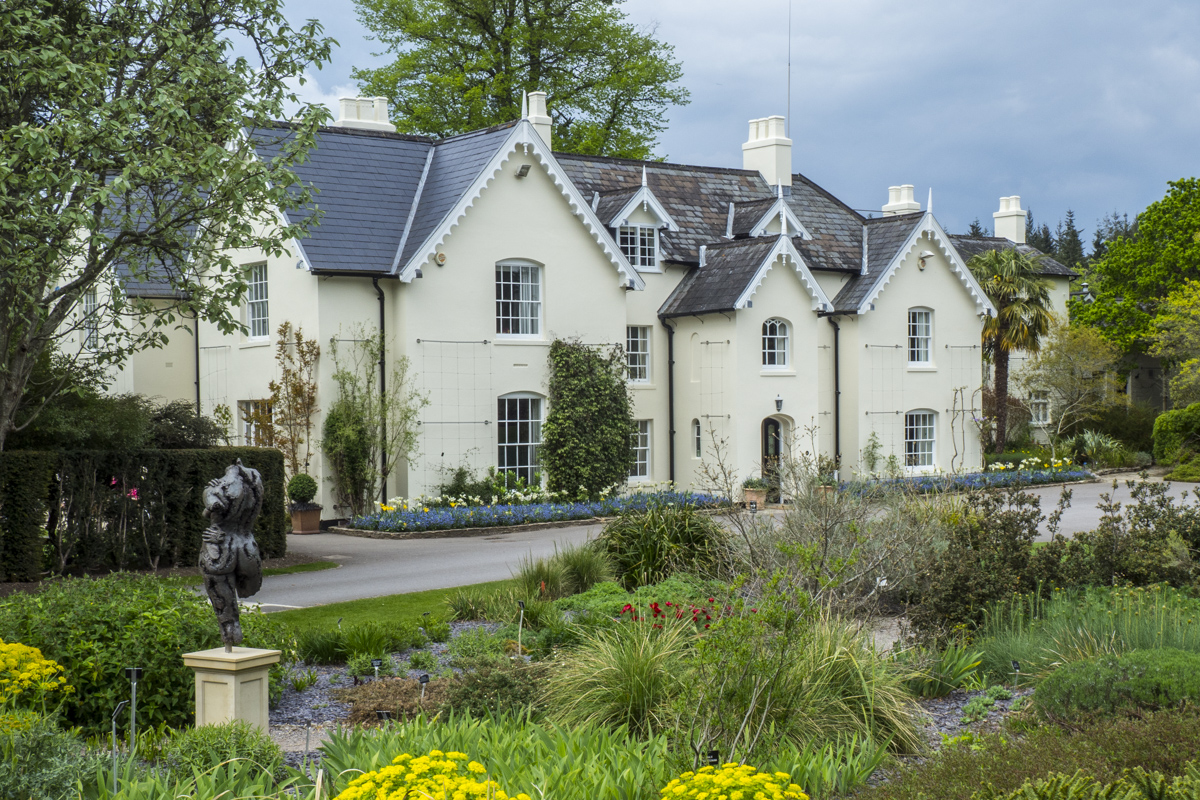 One of the outstanding features of Hillier Gardens are the superb seasonal planting displays dotted around the extensive grounds. On my arrival I was given a trail to follow that took me around all the plants currently in bloom. As a non-gardener I it was good to have seasonal blooms highlighted and gave me an objective for my first foray into these gardens. When I finished the trail I was wondering where to go next when another visitor suggested I cross the road to walk through the rhododendron wood. It was magnificent – aflame with every colour imaginable. Petals littered the narrow paths like confetti at a wedding. Making why way back to the house I spent some time enjoying the environs of the Lake and Bog Garden. Finally, I followed a path through the woods enjoying some more tree time before making my way back up the hill to the visitor centre. 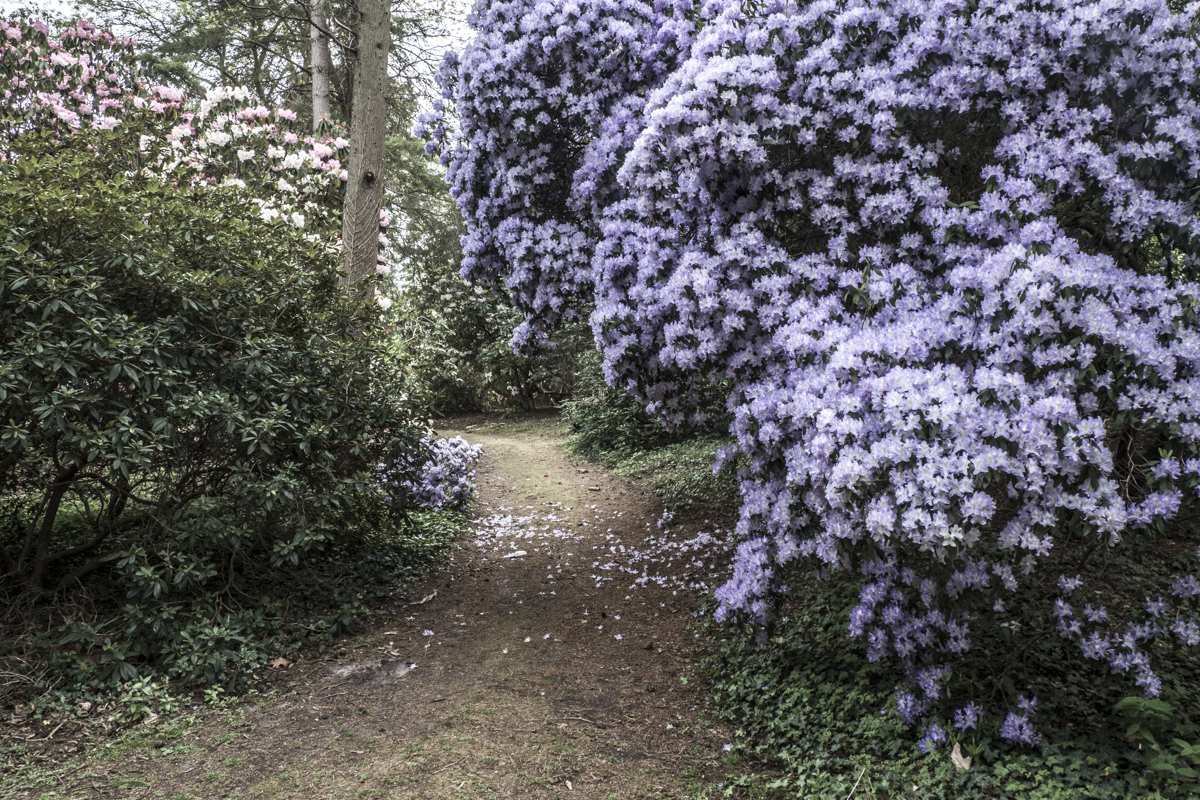 Rhododendrons at Hillier Gardens in the Test Valley in Hampshire

An unusual feature of Houghton Lodge is its architectural style, Cottage Orneé. The best example of this style in the UK, it was built at the end of the eighteenth century. It is close to the River Test and is thought to have been designed as a fishing lodge by John Plaw who pioneered this short-lived style. Cottage Orneé translates as decorated cottage and it was a cottage specially designed to complement its surroundings and conform to stylistic guidelines ensuring its compatibility with a picturesque landscape. The house and gardens have been sensitively restored to their former glory and are available for weddings and occasionally open to the public. 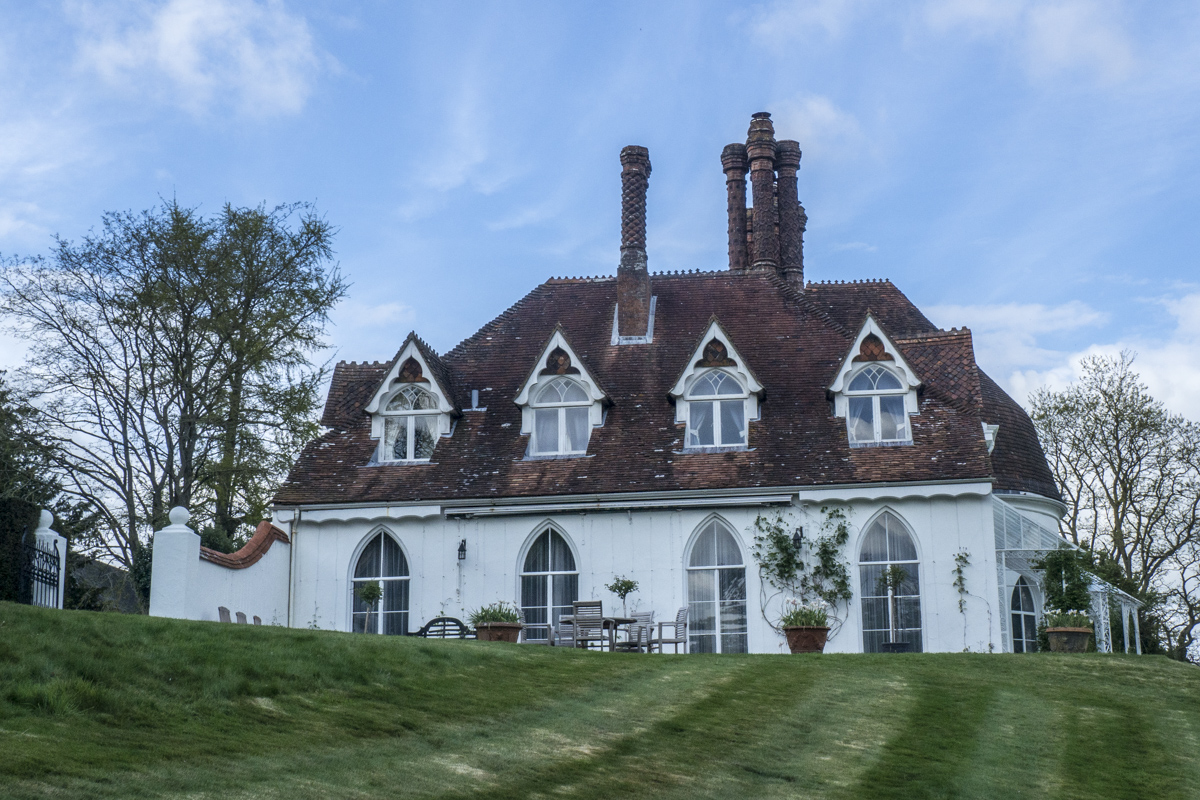 Houghton Lodge in the Test Valley in Hampshire

I managed to get into the Houghton Lodge Gardens Houghton Lodge just before the entrance, through the café, closed. It was perfect timing. The last visitors were drifting away and I soon had the gardens to myself. And, to be honest, I did indulge in some conversations with the plants. Wandering through the kitchen gardens I admired the blaze of dark pink apple blossom. This garden is enclosed by the best and most complete kitchen garden wall made of chalk cob that is still used for its original purpose. Walls made from this natural material ere built very high and roofed with loose tiles to put off intruders. This wall really helps the early ripening of fan-trained fruit trees planted up against it. My next stop was the orchid house where I spent some time admiring the delicate blooms in there. After making my way through the walled gardens I left through one of the doors and entered a series of linked gardens that led up to the lodge itself. I was particularly impressed by the peacock in the garden of the same name. Beyond these gardens the closely own, immaculately striped lawns swept down to the banks of the River Test flowing through the valley below. I spent some time down there enjoying the tranquillity and conversing with the swans who were more interested in finding some food for dinner than they were in me. Behind me in its elevated position, the lodge kept a friendly eye on me. It is a lovely place to spend some quality time. 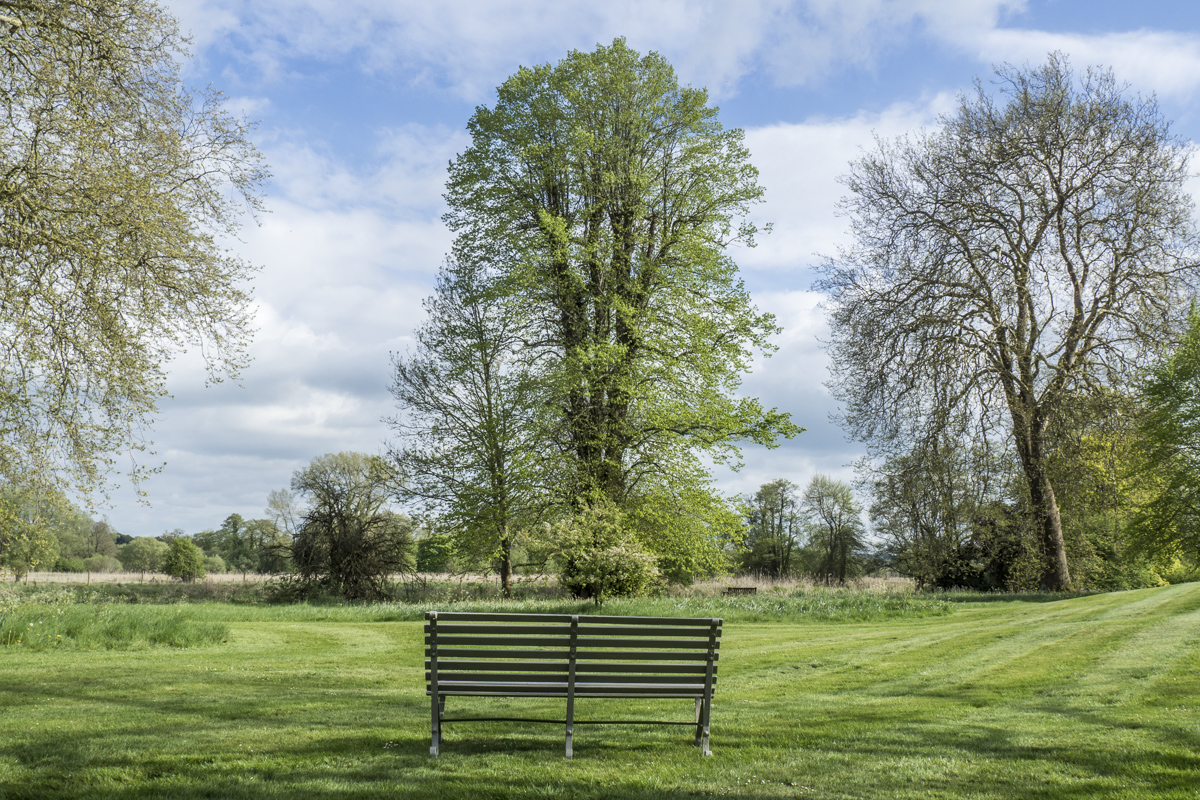 The Lawns at Houghton Lodge in the Test Valley in Hampshire

Mottisfont Abbey in the Test Valley

Mottisfont as we know it today owes a lot to the flamboyant lifestyle of Maud Russell, its last private owner. By then the original priory, established during the thirteenth century had already been converted into a private home. The original priory forms the back of the current building. Another original structure is the cellarium or undercroft of the priory. This would have been used as the office and storeroom of the cellarer. He was responsible for the priory’s provisions and was charged with the supervision of all its lands that still extend as far as the eye can see. Today the cellarium is open to the public and creates an interesting walk-through to the on-site the cafe.

The Old Priory at Mottisfont in the Test Valley in Hampshire

When Maud and Gilbert Russell moved into Mottisfont in 1934 it soon became the centre of a fashionable artistic and political circle. They modernised the house and the estate. Rooms were reconfigured and redecorated, creating the Neo-classical, luxurious look that visitors enjoy today. A unique attraction here is the Whistler Room. Rex Whistler was commissioned to create a unique backdrop in the large saloon. The resulting trompe l’oeil murals are stunning. It was to be his last and best work as he was killed during the Second World War. Mottisfont is also home to a permanent collection of twentieth century art that belonged to Derek Hill, a frequent visitor here. Lurking under the wisteria that partially clothes the façade of the house is the Mottisfont Angel believed to be a likeness of Maud herself. It was created by her Russian lover and lifelong friend, the artist Boris Anrep. 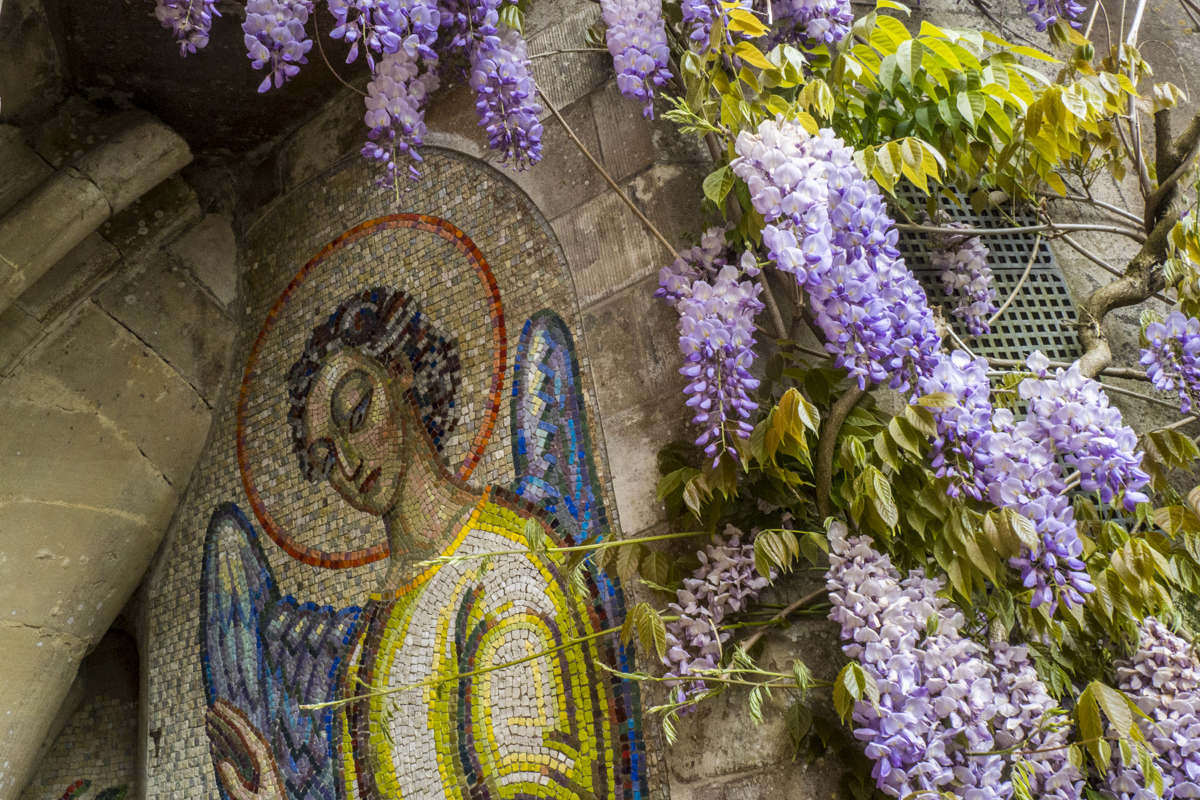 An ancient spring in the grounds gives Mottisfont its name. It was around this font around that the local community held their moods or meetings more than one thousand years ago. It is possible that uch a regular supply of fresh water made this an ideal place to site a medieval priory. It was a good starting point for my walk around the gardens. Walking away from the front towards the main gate led me to a new addition, a walled kitchen garden. It has not been re-constructed on its original site which is occupied by Mottisfont’s famous rose garden. Planted with traditional roses that only flower once a year this garden is a riot of colours and fragrances when the roses are in full bloom. Any time of the year this is still a very pretty garden and a favourite of mine. I also enjoy strolling along the paths on either side of the River Test that flows through the extensive grounds. Pausing on one of the foot bridges crossing the river I pause to scan the waters below me for a flash of the brilliant colours of the rainbow trout that live there. 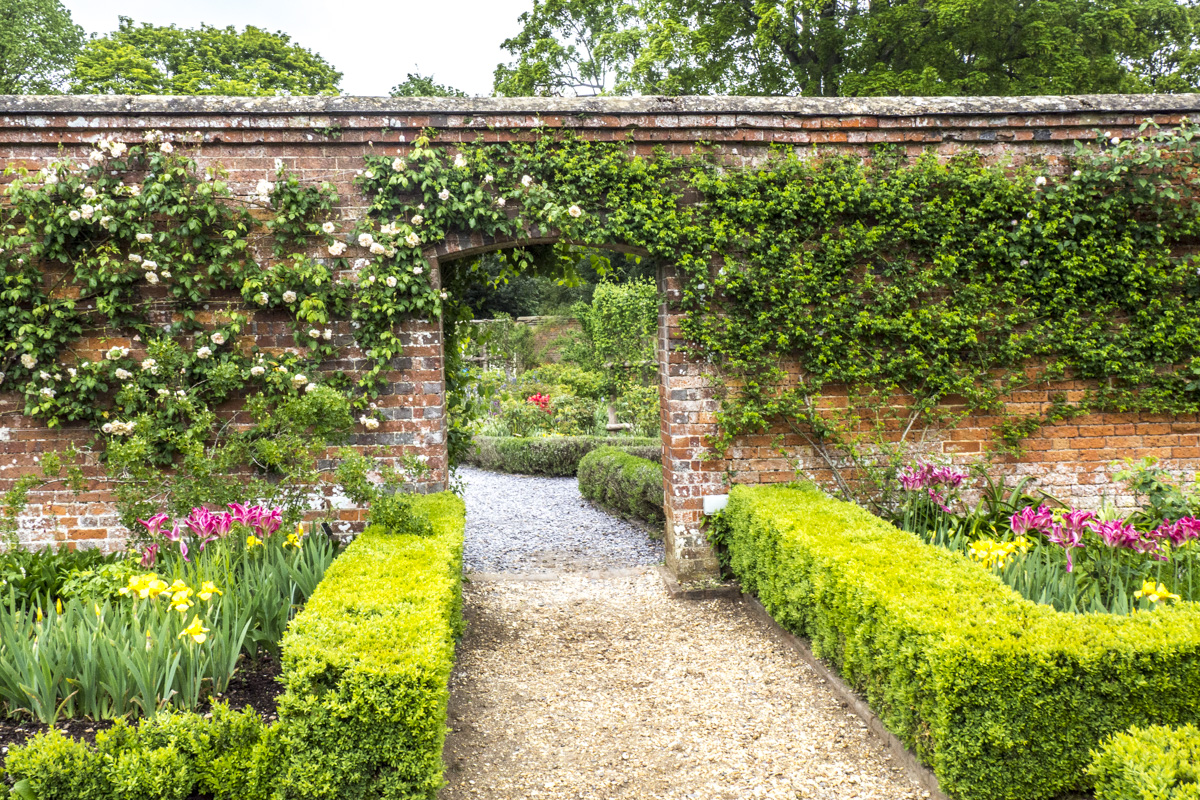 Hinton Ampner in the district of Winchester, Hampshire

Ralph Dutton inherited Hinton Ampner from his grandfather, John Dutton, in 1935. By then the building, believed to have been built during the 1540s had morphed under various owners from a Tudor to a Georgian and finally a Victorian mansion. Ralph, a devotee of Georgian architecture, disliked Victorian architecture and set about restoring its appearance to one more fitting of the eighteenth century. He spent his time searching the country for any features that could be incorporated in this restoration including doors and windows. The work was completed in 1939 and Ralph had just begun to re-furnish it when war broke out and he was ordered to hand it over to the Portsmouth Day School for Girls. When he got it back in 1945 he once again began re-decorating, a task hampered by post-war rationing. It took him more than fifteen years and was finally completed in 1960. Then, one fateful afternoon in April 1960, while Ralph was walking in the woods, his precious house caught fire. He vowed to build it again and succeeded in doing so in just three years. And the house we see today is the house that Ralph re-built. Now under the auspices of the National Trust it is a credit to his passion and determination. 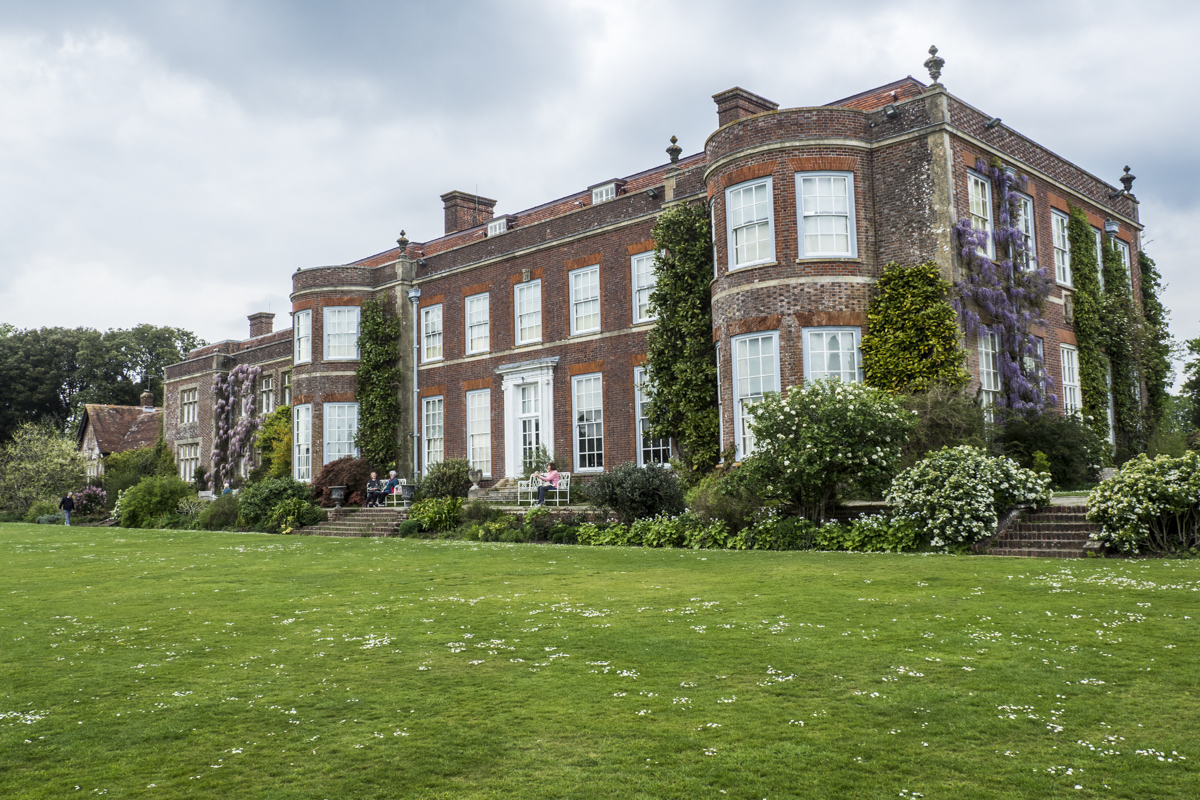 The House at Hinton Ampner in East Hampshire

The ancient Church of All Saints stands in the grounds of Hinton Ampner overlooking the gardens in front of it. Several restorations mean the exterior does not reflect its ancient origins but some evidence of them can be found inside. Around the church the extensive grounds of the house encompass formal gardens, orchards, parkland and woods. There are several marked trails for visitors to follow and its woodland walk is especially well-known for its splendid display of bluebells in the spring. After visiting the church I was content to potter around the terrace garden at the back of the house and explore some little dells on the verge of the woods. 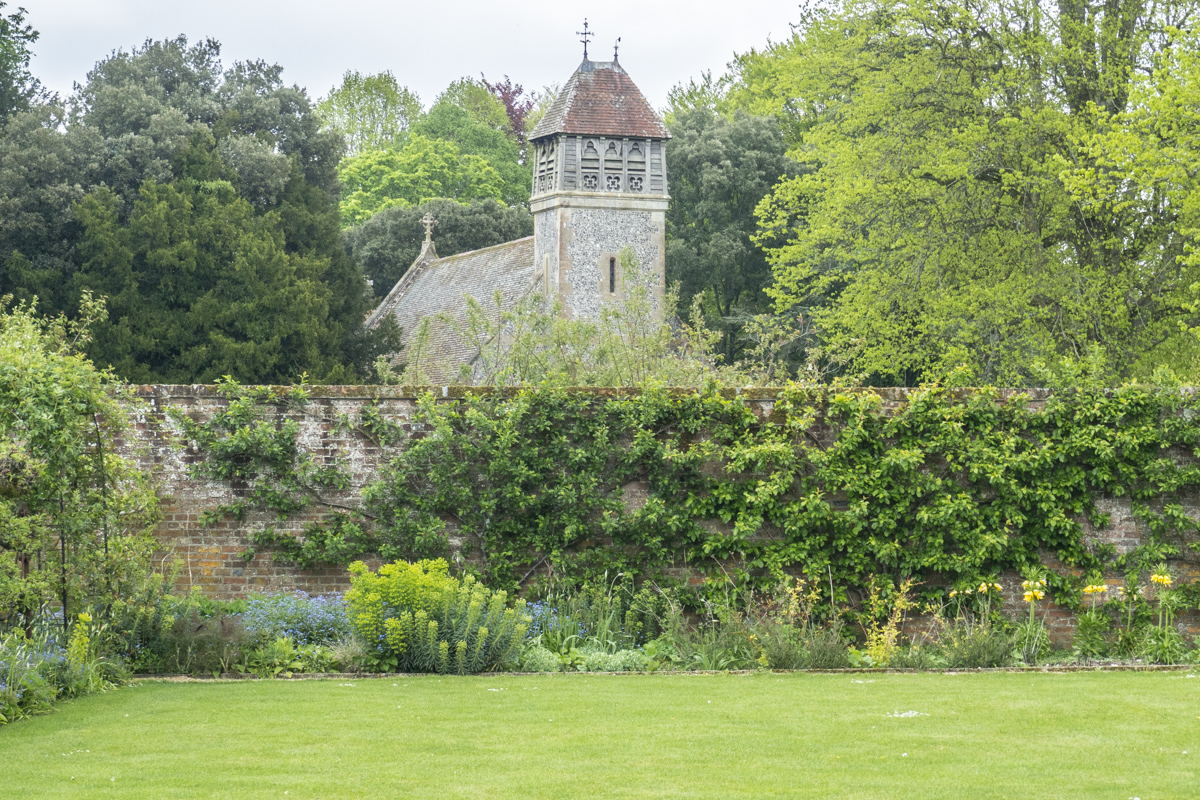 Where to Stay in the Test Valley

The Apple Rooms at Houghton Lodge Gardens offer well-appointed rooms in an unusual setting. Six self-catering units, each named for a different apple, have been fashioned out of old cow byres. This unit include a good sized bedroom, a bathroom, kitchenette and the luxury of lounging in a slipper bath while watching television. 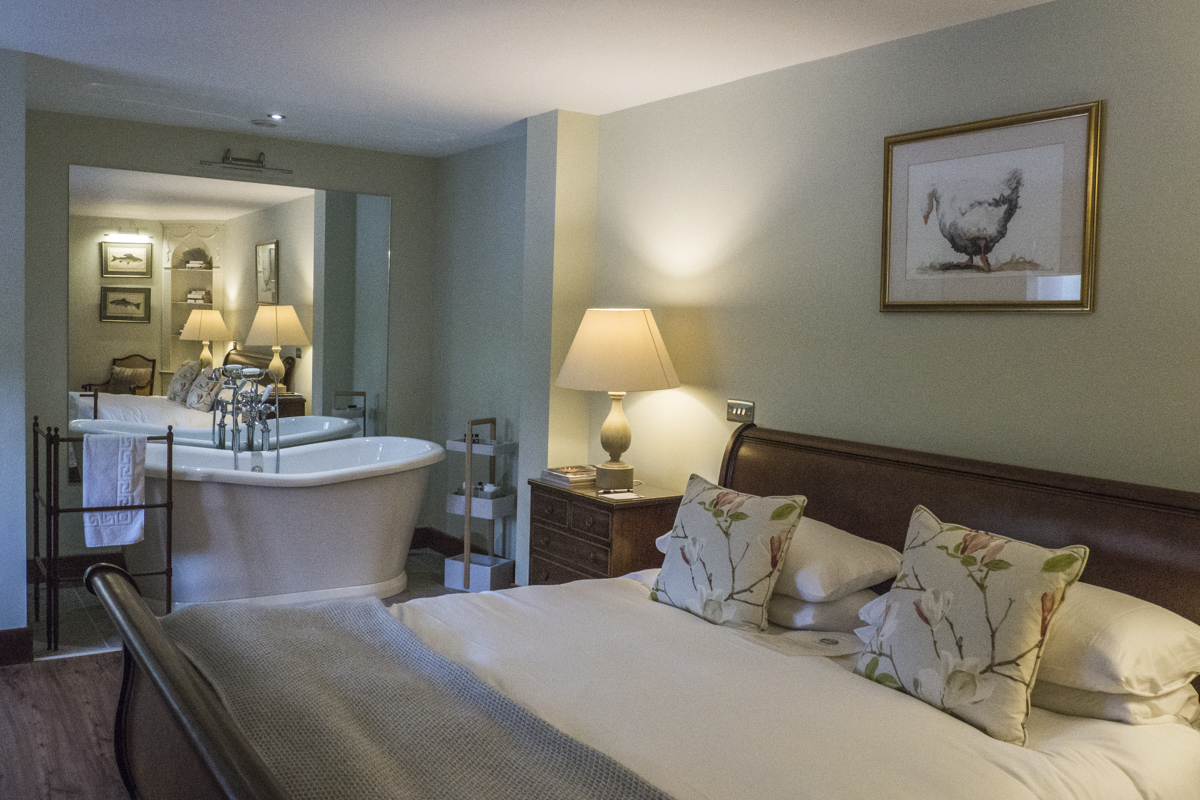 These rooms are part of the estate that belongs to Houghton Lodge a Grade 2 listed fishing lodge on the River Test. It was very pleasant after a long day out to wander through the gardens and down to the river. 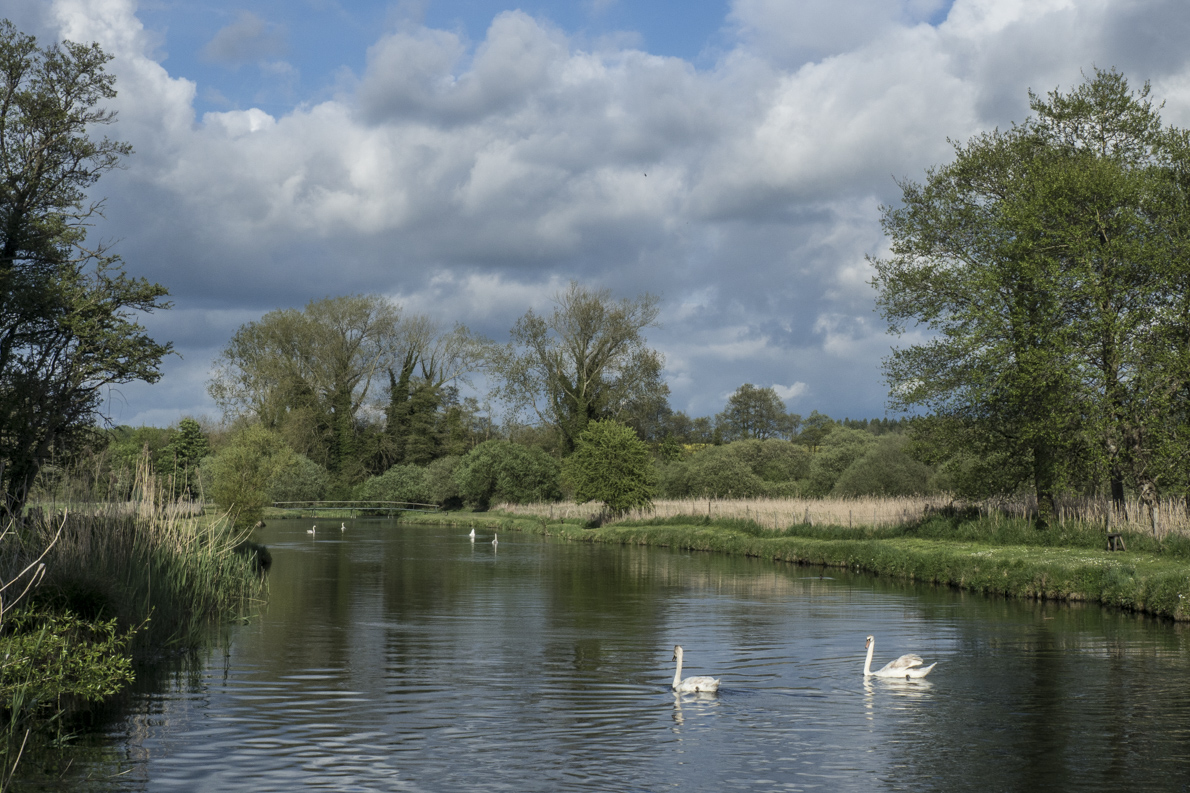 The River Test at Houghton Lodge in the Test Valley