Arundel and its Castle - a West Sussex Gem

For centuries Arundel Castle guarded the River Arun below it. Today, resplendent on the hill above the town of Arundel its moat is empty, the portcullis is up and it welcomes all visitors.

Arundel in West Sussex has been dominated by the owners of its castle since Saxon times and the fortunes of both have been closely linked. The town prospered thanks to its port and market until the English Civil Wars when the castle changed hands three times and was reduced to a partial ruin. After the Civil Wars until the end of the eighteenth century Arundel was in a poor state. But by the turn of the nineteenth century this little market town was flourishing again. Although the port and markets had ceased to operate by the beginning of the twentieth century the advent of a station on the Brighton to Portsmouth railway line brought visitors to the town that was fast becoming a popular tourist destination in part due to a complete restoration of its castle. 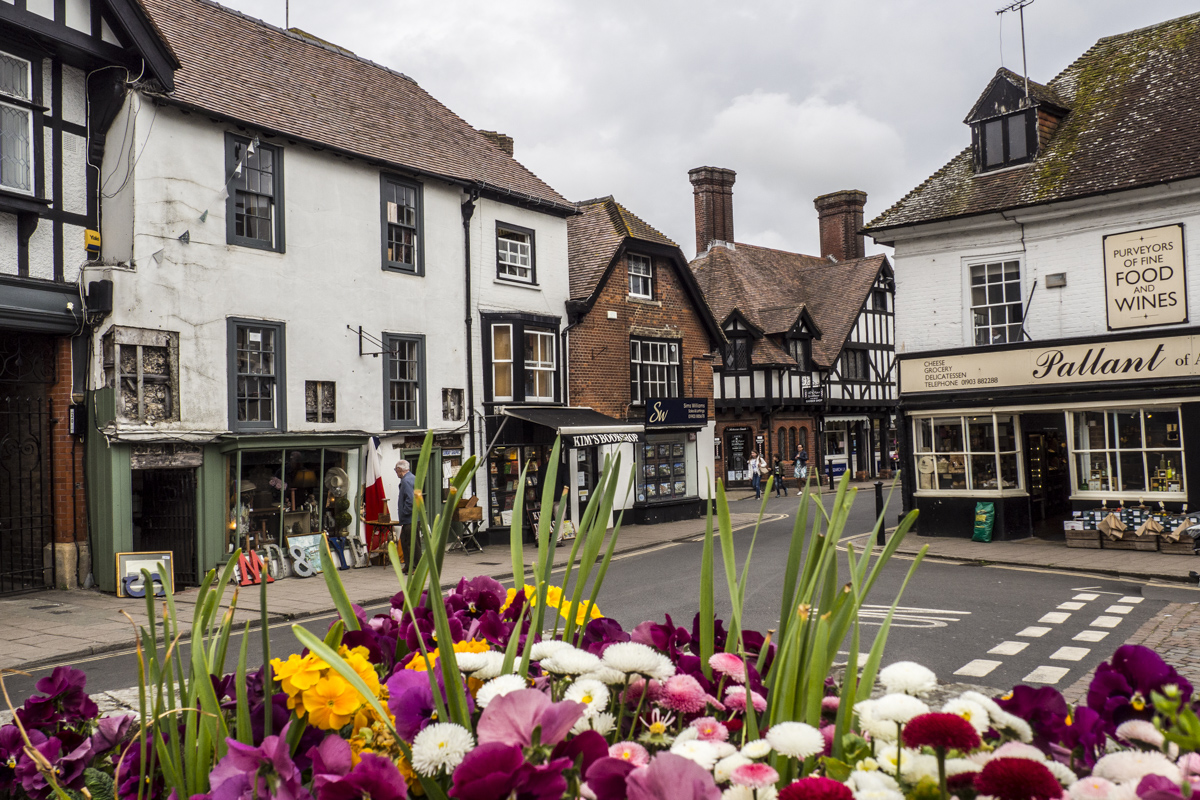 The Town Square in Arundel

Ruins of Blackfriars a Dominican Friary in Arundel

A Blackfriars Dominican Friary was founded in Arundel during the first half of the thirteenth century. As the Dominicans liked to be close to the people they were preaching to it was built by the River Arun. Here they were near both the port and the market, both prospering during the Middle Ages. Following the dissolution of the monasteries in 1538 its buildings were used for other purposes including a timber yard and a malt house. The sixteenth Duke of Norfolk gave the ruins of the Friary to the town in 1935. More information about the history of Arundel can be found in the Arundel Museum close to these ruins. 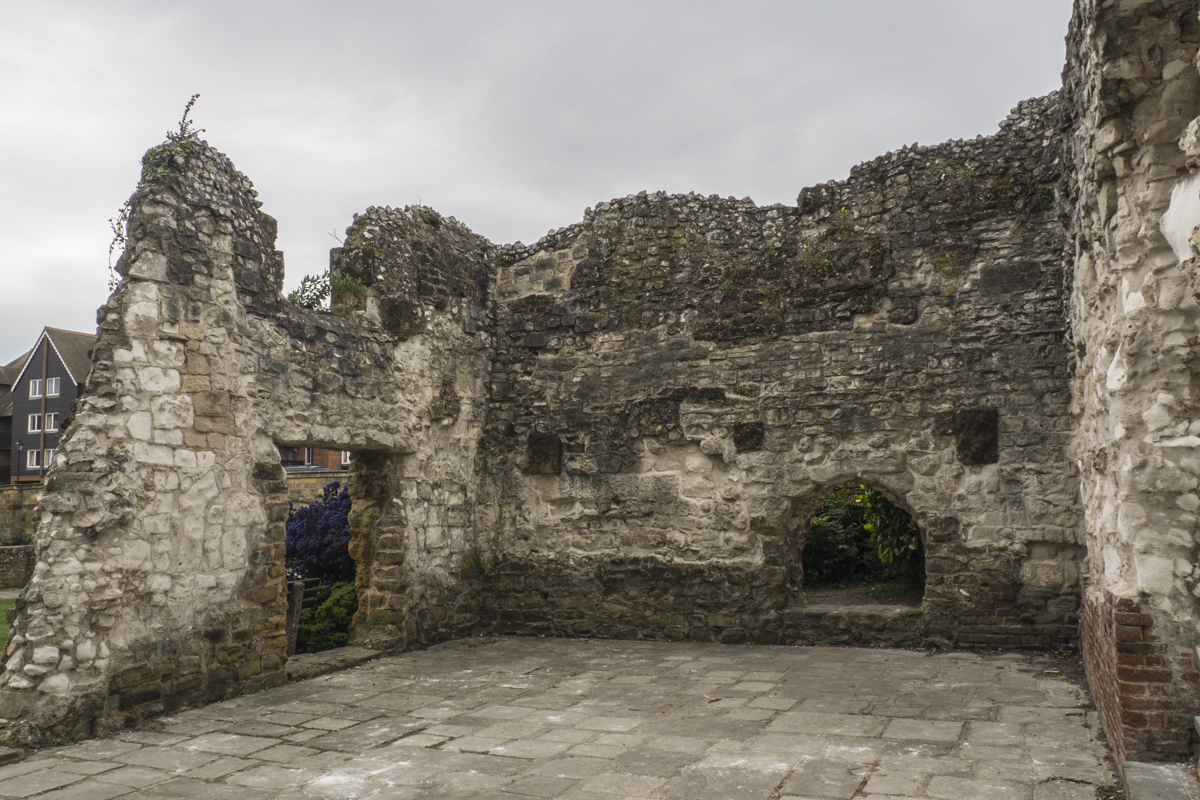 Blackfriars, The Remains of a Dominican Friary in Arundel

The Arundel Museum may be small but it is packed with information about the history of Arundel and in particular its relationship with the owners of its imposing castle across the road. Just inside the entrance a large, old wooden rudder illustrates the historical importance of the town as an inland port. During the eleventh century Arundel developed into a prosperous market town thanks to its busy international port. Ships would sail between Arundel and the sea, five miles away, along the River Arun. Towards the end of the thirteenth century Arundel was granted a charter to hold an annual fair bringing trade to the town from far and wide. By then Arundel Castle had come into the ownership of the Fitzalan family. 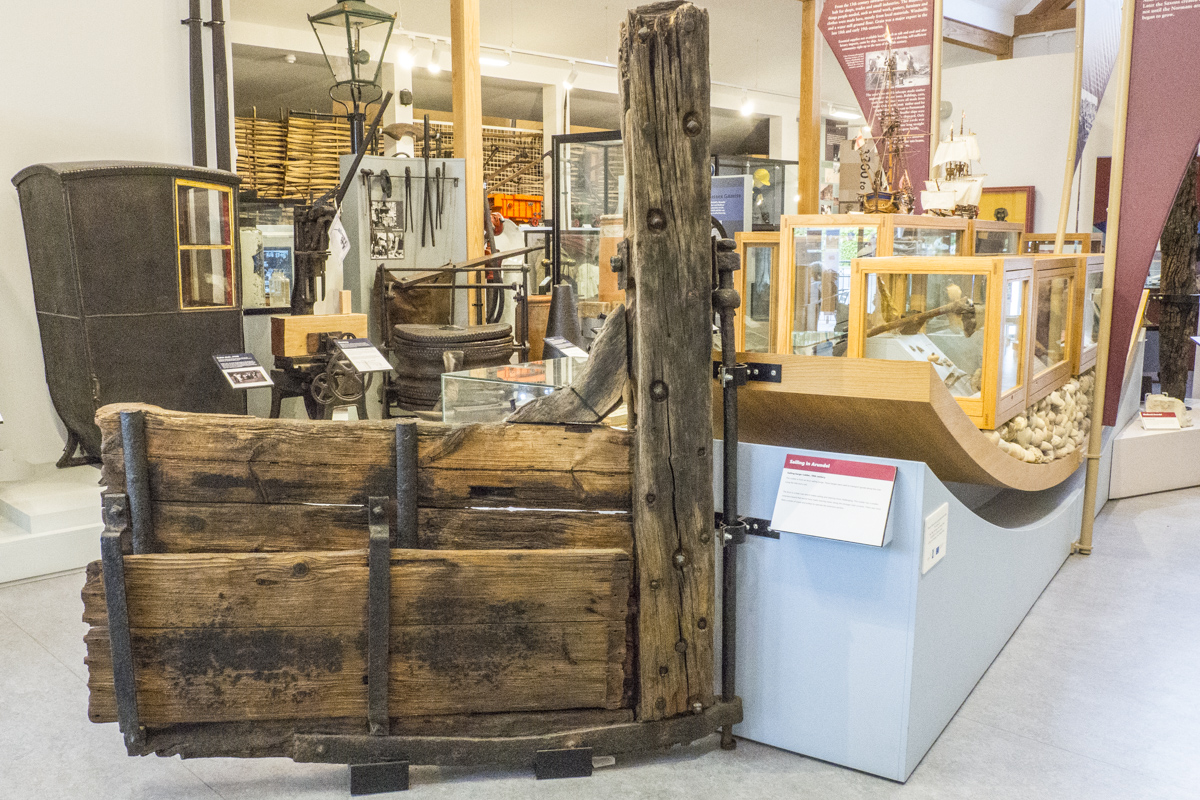 Old Wooden Rudder on Display in the Arundel Museum in Arundel

The oldest features of Arundel Castle are the mound it was built on in 1068 and the gatehouse. It was built by Roger de Montgomery, then the Earl of Arundel. This title passed, with the castle, to William d’Albini II. Since 1138 Arundel Castle has descended directly from this family, through female heiresses, to the Fitzalans in the thirteenth century, then to the Howards in the sixteenth century before becoming the seat of the Dukes of Norfolk until the present day. Under siege twice during the Civil War first by Royalists and then by the Parliamentarians the castle was badly damaged and was not restored until the beginning of the eighteenth century. Further restoration took place at the end of the nineteenth century resulting in the magnificent building that exists today. Part of this building and the grounds are now open to the public. 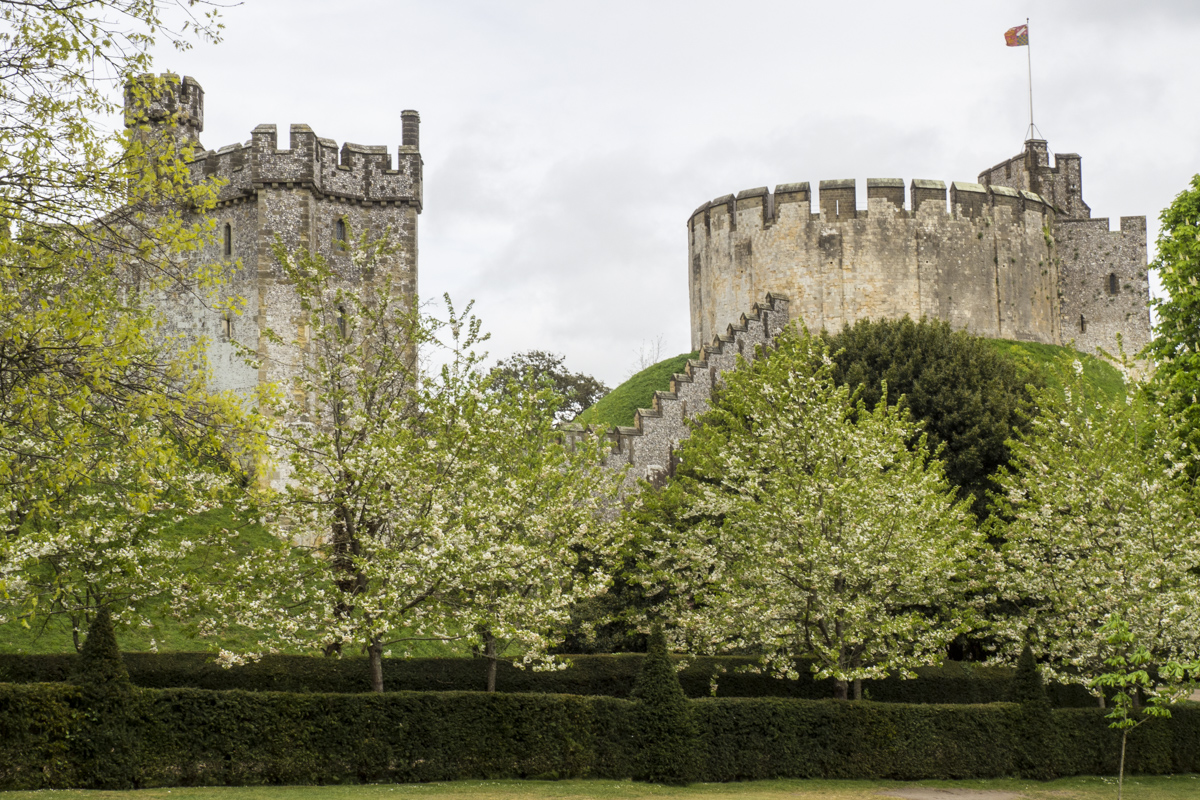 The interior of the castle comprises two sections. Its keep and the castle rooms. A narrow winding staircase emerges first in St Martin’s chapel. This tiny chapel was installed when the keep, part of the original castle, was built. it is dedicated to St Martin a Christian and a reluctant Roman soldier. He was to become the patron saint of soldiers and beggars and the first non-martyr to become a saint. Emerging onto the roof of the keep a circular walkway allows visitors to look through openings in the wall across the town below, the countryside beyond and also to appreciate the private gardens behind the castle. 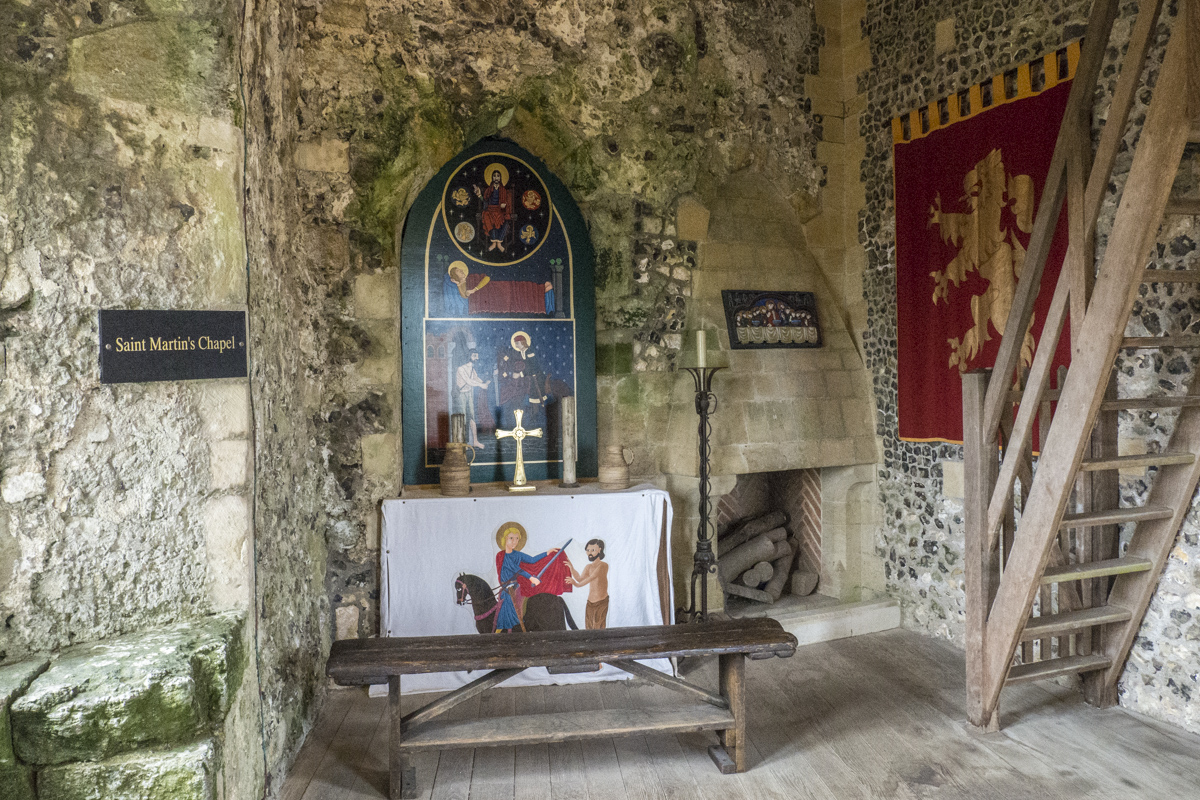 Inside the main building the rooms are sumptuously and elegantly furnished with many priceless works of art. Furnishings and artefacts are well documented on the information sheets available in each room and volunteer guides are happy to supplement that information. I was particularly impressed by the large library that is divided into three sections by plush red velvet curtains. Upstairs visitors can stroll through some of the many bedrooms. These include a suite of three rooms especially designed to accommodate Queen Victoria and Prince Albert when they stayed at the castle in 1846. 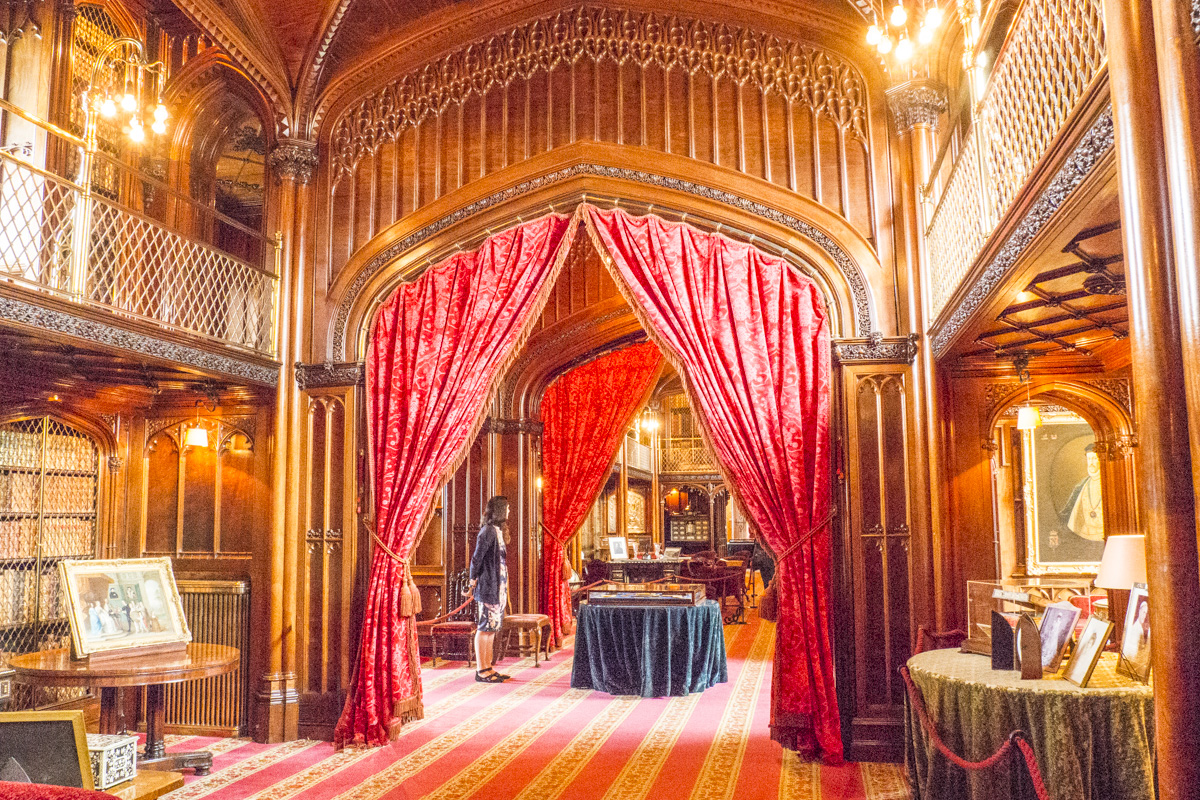 The Grounds of Arundel Castle

Surrounded by beautiful gardens and extensive lawns of particular interest in the castle grounds is the
Collector Earl’s Garden This incredible garden is decorated with colossal green oak structures surrounded by flowerbeds bursting with colourful blooms. It was established as a memorial to the fourteenth Earl of Arundel who was a friend of the famous architect Inigo Jones and a keen collector of art. The oak structures have been created from drawings by Inigo including Oberon’s Palace, the centrepiece. This oak building features a decorative arch over the doorway, four hanging turrets and a higher dome covered in hand scalloped cedar shingles that looked as though they have been covered with gold. 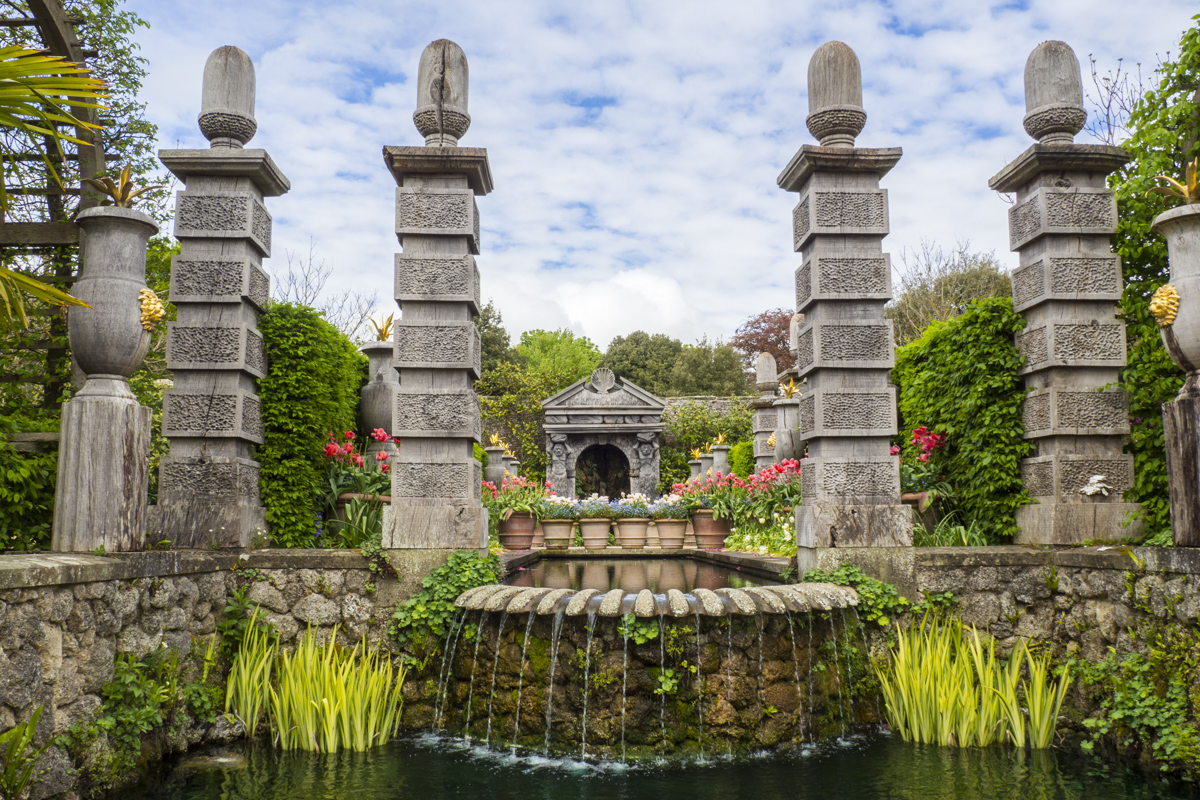 Collector Earl’s Garden in the grounds of Arundel Castle

Bizarrely the Fitzalan private chapel in the grounds of Arundel Castle is also part of the parish church of Saint Nicholas. This lovely example of Gothic architecture with a carved timber roof and choir stalls was founded by the fourth Earl of Arundel in 1380. In 1879 it was decided that the Chapel was not part of the Protestant parish church but an independent ecclesiastical structure and therefore still Catholic. It is still the burial place of the Dukes of Norfolk whose family still live in the castle and whose ancestors remained staunchly Catholic. An unusual feature here is the glass wall that divides the Chapel from the parish church. Visitors who want to visit the church have to leave the castle grounds and walk through the town to get inside. 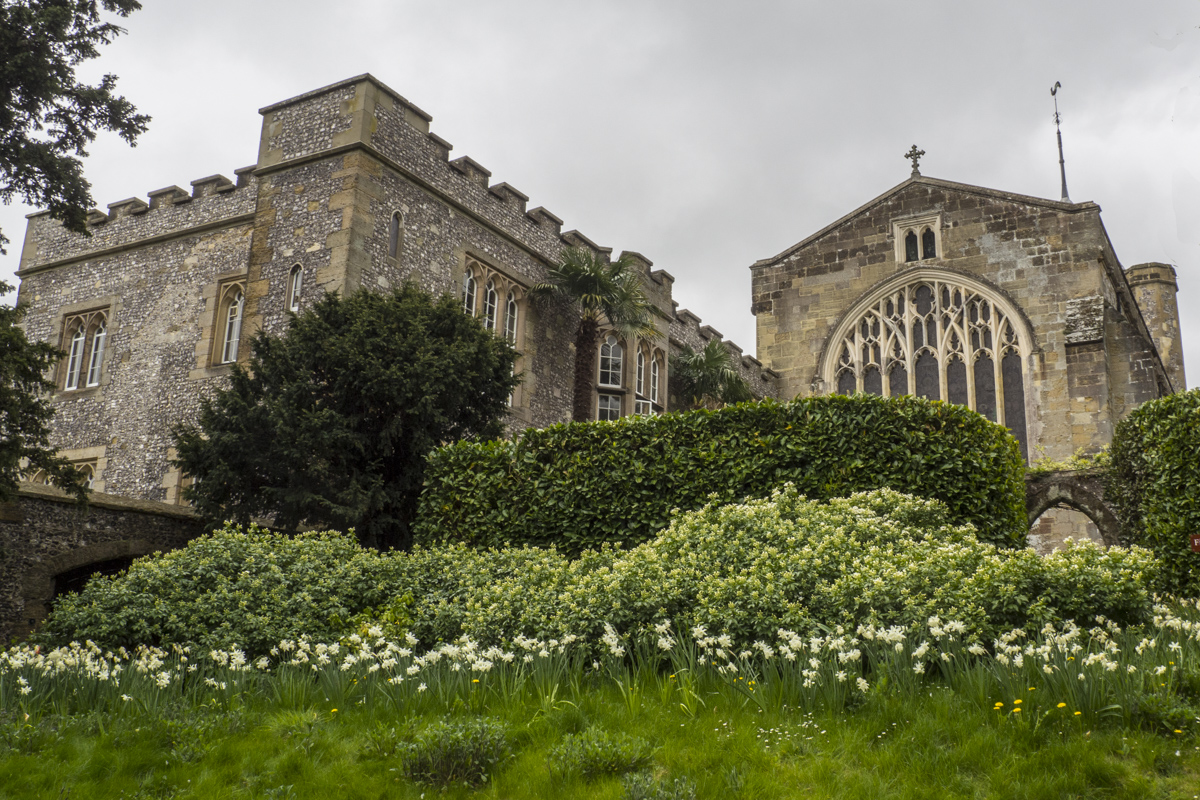 Fitzalan Chapel in the grounds of Arundel Castle

The Church of Saint Nicholas in Arundel

The present Church of Saint Nicholas is probably the third church to be built on this site and was almost certainly designed by two of the most famous architects/masons at the end of the fourteenth century, Henry Yeveley and William Wynford. This church was built in flint and local stone and its parishioners worship in the nave and transepts. The chancel was originally built for a College of Cannons and is now the Fitzalan private chapel. Of particular note inside are the ancient font, the stone pulpit and a rare iron screen. 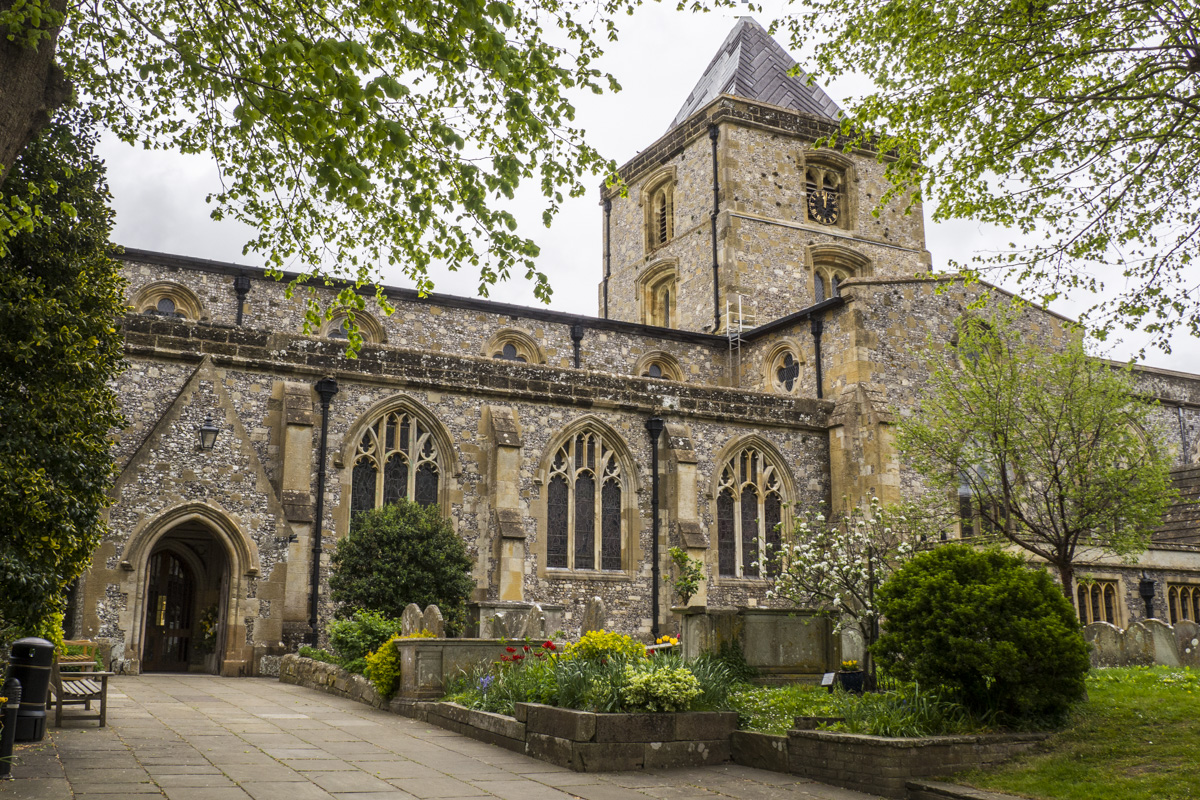 The Church of Saint Nicholas in Arundel

The Cathedral in Arundel

Just above the parish church Arundel Cathedral at the top of the hill is the town’s Catholic cathedral. An excellent example of the Gothic Revival style of architecture its construction was begun by the fifteenth Duke of Norfolk in 1868 and it was completed in 1873. It may seem rather odd that the architect selected by the duke, Joseph Hansom, was better known for inventing the hansom cab but he fulfilled the duke’s ambition to create a magnificent building and a rival to his own castle. It is one of the finest examples of this style of architecture in England with its slender pillars rising to its lovely vaulted ceilings. The cathedral is dedicated to Our Lady and Saint Philip Howard the twentieth Earl of Arundel who was canonised in 1970. He has been buried no less than three times, first in the Tower of London where he was imprisoned (but not executed) in 1589 as one of the Forty Martyrs. Later, he was moved to the Fitzalan Chapel and finally came to rest inside this cathedral in 1971. 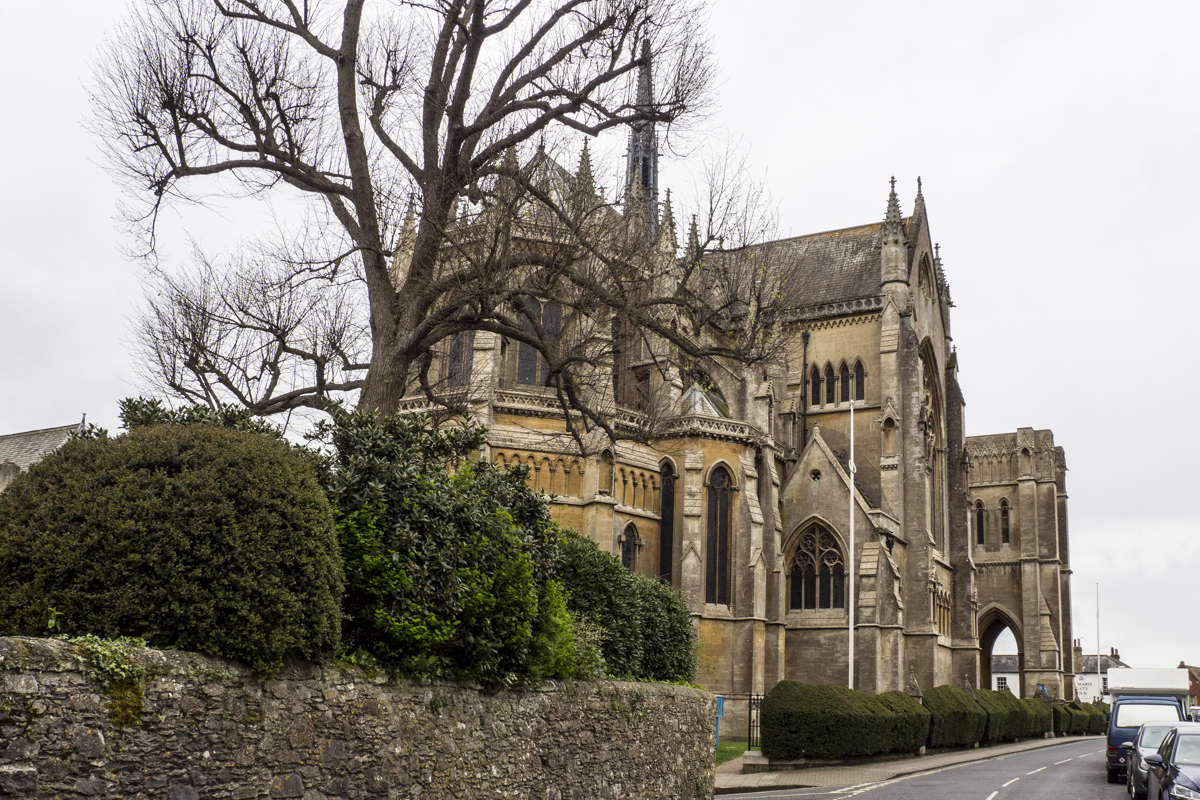 The Cathedral in Arundel

The Town Hall in Arundel

Visitors to Arundel cannot fail to notice its unusual Town Hall. It was built in between 1834 and 1835 by the twelfth Duke of Norfolk in return for the town council ceasing to use the sacristy at St Nicholas Church (now the castle’s private chapel). The building has a flint and sandstone façade and is flanked by two towers built in the Norman style. Originally the large upstairs room was used for balls and concerts. The basement had three cells which were used by the county police force and also housed the town’s fire engines. The Holmes Chamber was added in 1957 to commemorate two-hundred years of service as Mayors and Town Clerks by the Holmes family. Today the council meets in this chamber and the building is also a popular venue for weddings and other events. 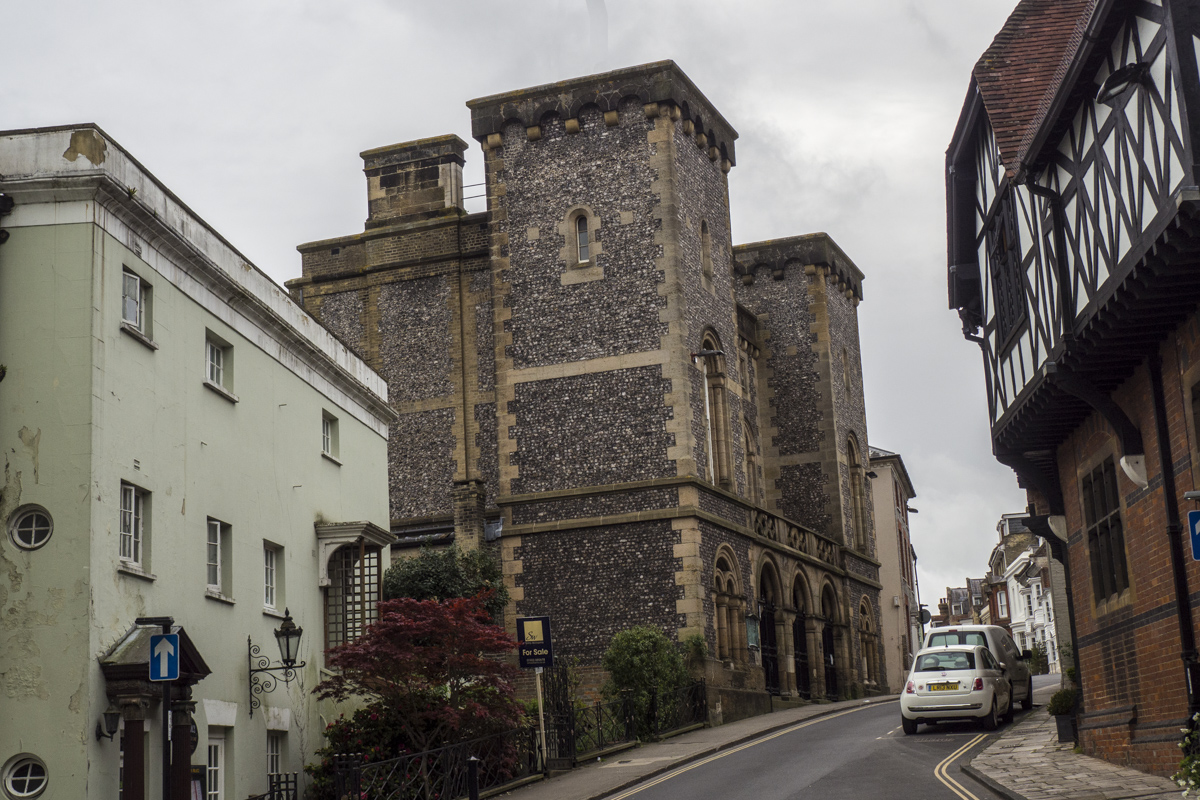 The Town Hall in Arundel

Although it looks natural Swanbourne Lake was created by the eleventh Duke of Norfolk in the late eighteenth century as part of his development of a new, larger Arundel Park. Next to the castle this park encloses over a thousand acres of downs and woodland. The lake was created by excavating the valley and stream above the pond which once powered an ancient mill mentioned in the Doomsday Book. The design of the lake included landscaping with trees and paths. John Constable’s last painting in 1837 was of the mill. Eight years later the thirteenth Duke of Norfolk built a new, model dairy on the site of the mill which was no longer in use. The rectangular tower on the high ground which can be glimpsed from the end of the lake was a trial pieced designed by Francis Hiorne the architect who was being considered to undertake the restoration of the castle. Sadly, he died before he could work on the castle and the tower was named after him when it was completed in 1787. 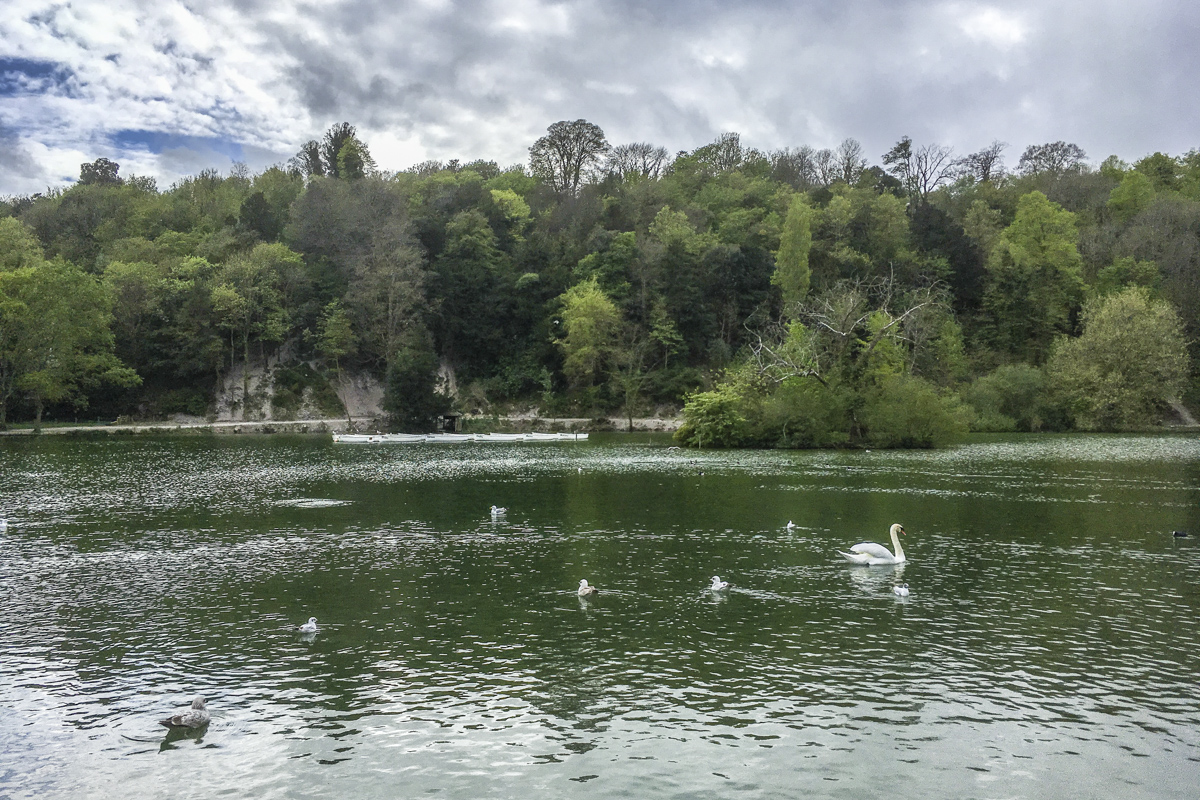 Just inside the gates of the park is a pretty lodge, Swanbourne Lodge designed by William Burn in 1845 and today used as a restaurant. This Lodge is one of the best examples of a split flint stone building in Sussex. 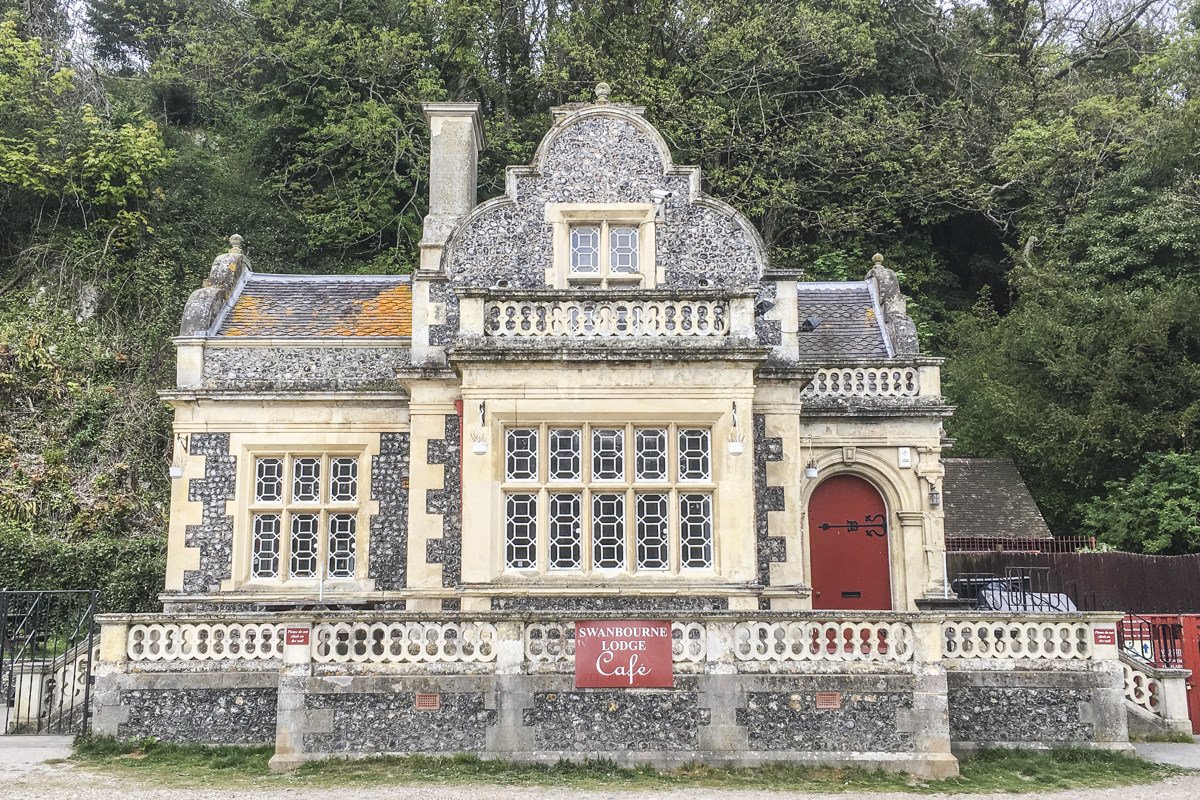 The Wetlands in Arundel

Arundel Wetland Centre occupies a site that until 1976 was a commercial watercress farm. It was thanks to the vision of Sir Peter Scott founder of the Wildfowl and Wetlands Trust that the area was transformed to a Wetland Centre. This haven for nature is a very special place and allows visitors to get close to nature in a beautiful setting. Strolling through the wetlands was a very pleasant way to end a lovely day in Arundel. 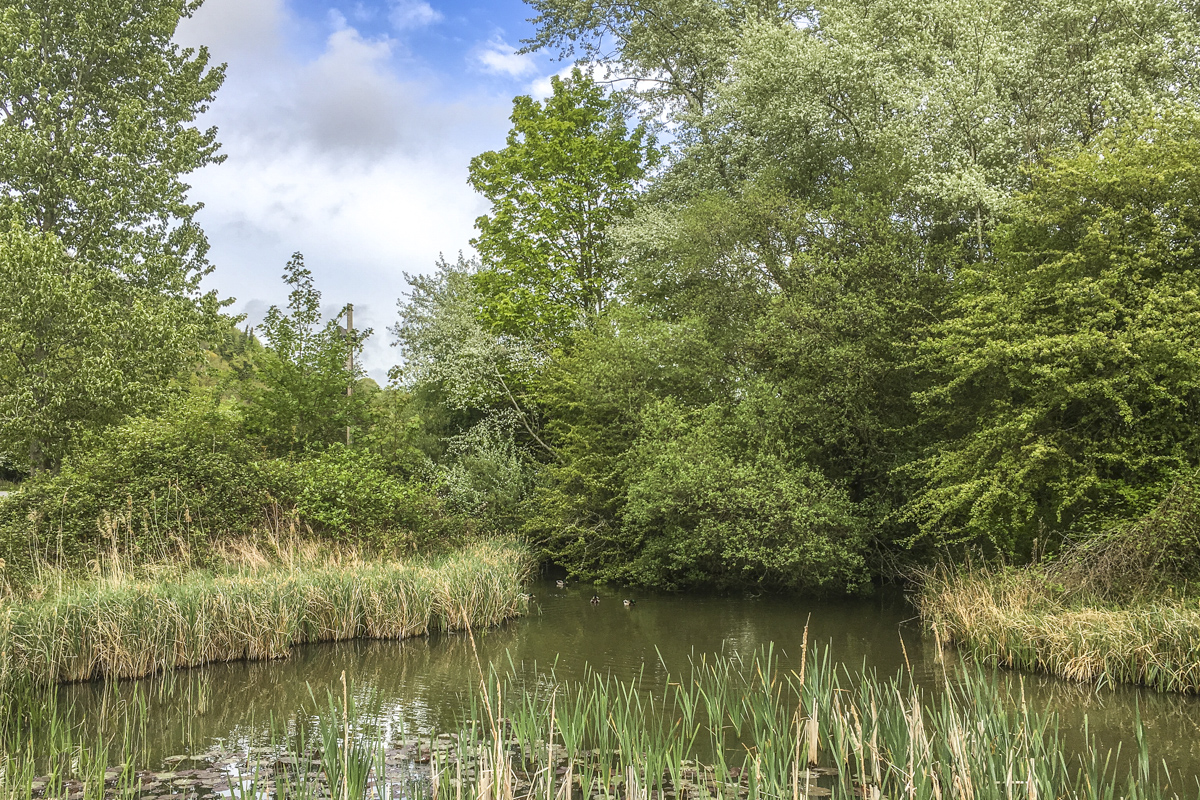 The Wetlands in Arundel

Want to know more about this interesting little town and have the opportunity to chat to a local expert? Join a walking tour organised by Arundel Walking Tours 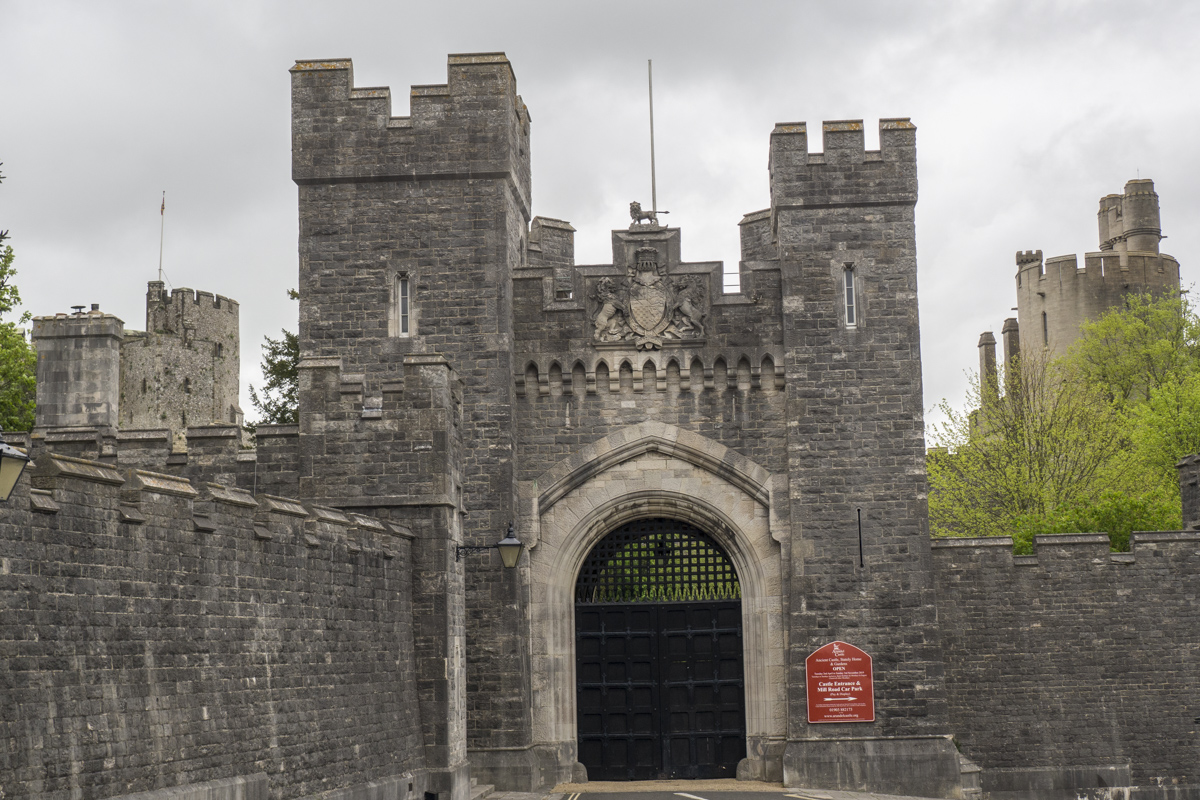