Charleston in South Carolina: A Trail of the Unexpected

Charleston is a living architectural exhibition that fascinates and excites its visitors as they stroll through its lovely tree-lines streets or gaze up in admiration at its many church steeples.

Charleston in Charleston County, South Carolina was originally established by English colonists in 1670 and named Charles Towne after their king, Charles II. Ten years later it moved to its present site on a peninsula between the estuaries of the Rivers Ashley and Cooper. Its deep water harbour has brought trade and prosperity to the town since the seventeenth century. Wealthy merchants built fabulous houses here many of which are still privately owned. Its proud citizens have always wanted the best. it is said that if London had it then Charleston had to have it as well. As there were no natural building materials in the area facades were made to replicate different styles of building. There are also some styles that are unique to Charleston. 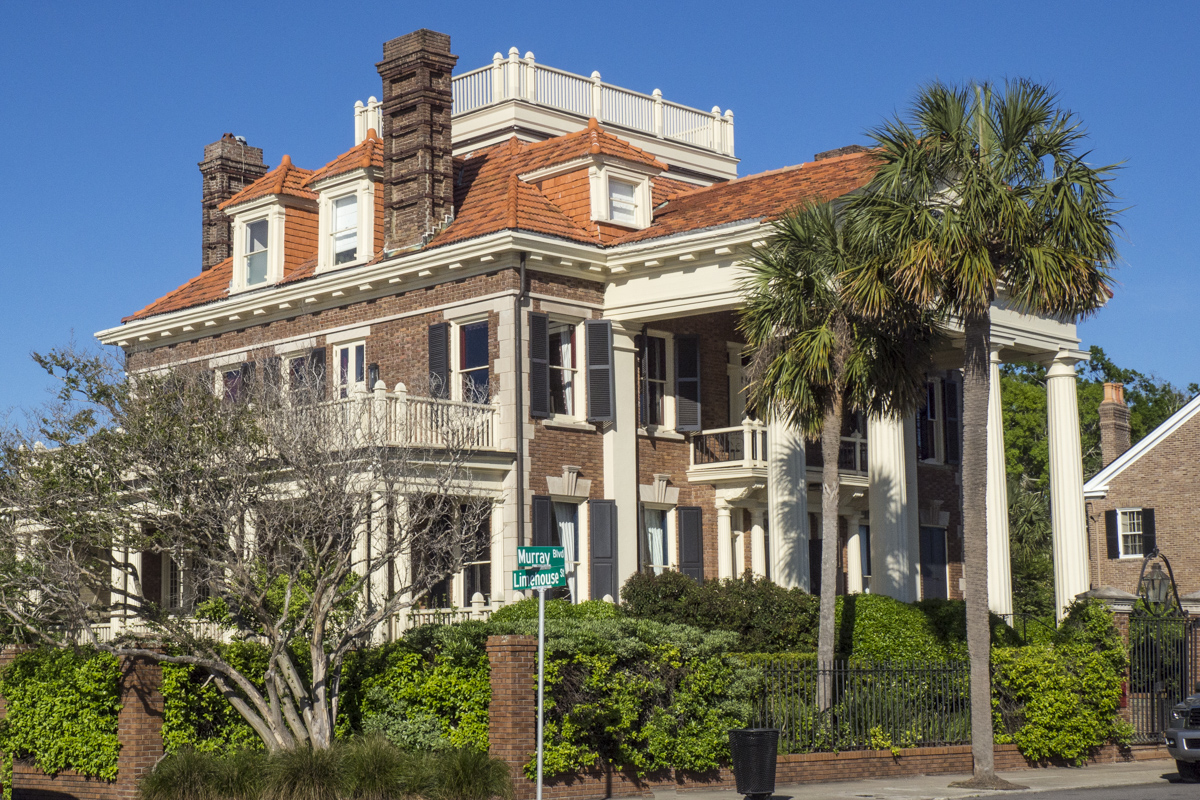 An Impressive House on The Battery in Charleston

On the Streets Where They Live in Charleston

A typical house in Charleston is known as the Charleston single house. The narrow front of these houses face the street. The large balconies on the side of the house, known as piazzas, face south or west to catch the breeze. Although the term piazza in Italian means a public square when it migrated to the deep south during the late seventeenth century it was originally used to describe arcaded spaces in major public buildings. Today it simply refers to covered spaces such as large porches. This style of architecture became popular during the eighteenth century after the fire of 1740. Many of the houses in the residential area have been awarded the Carolopolis for excellence in exterior restoration. Most of these houses also display a brief history of the property. Stroll along Tradd Street or Orange Street to enjoy some of the most attractive houses in the town. Look out for the pretty alleys, public rights of way between the main streets, in particular Longitude Lane off Church Street. If you prefer not to walk, then let a horse and carriage take the strain. 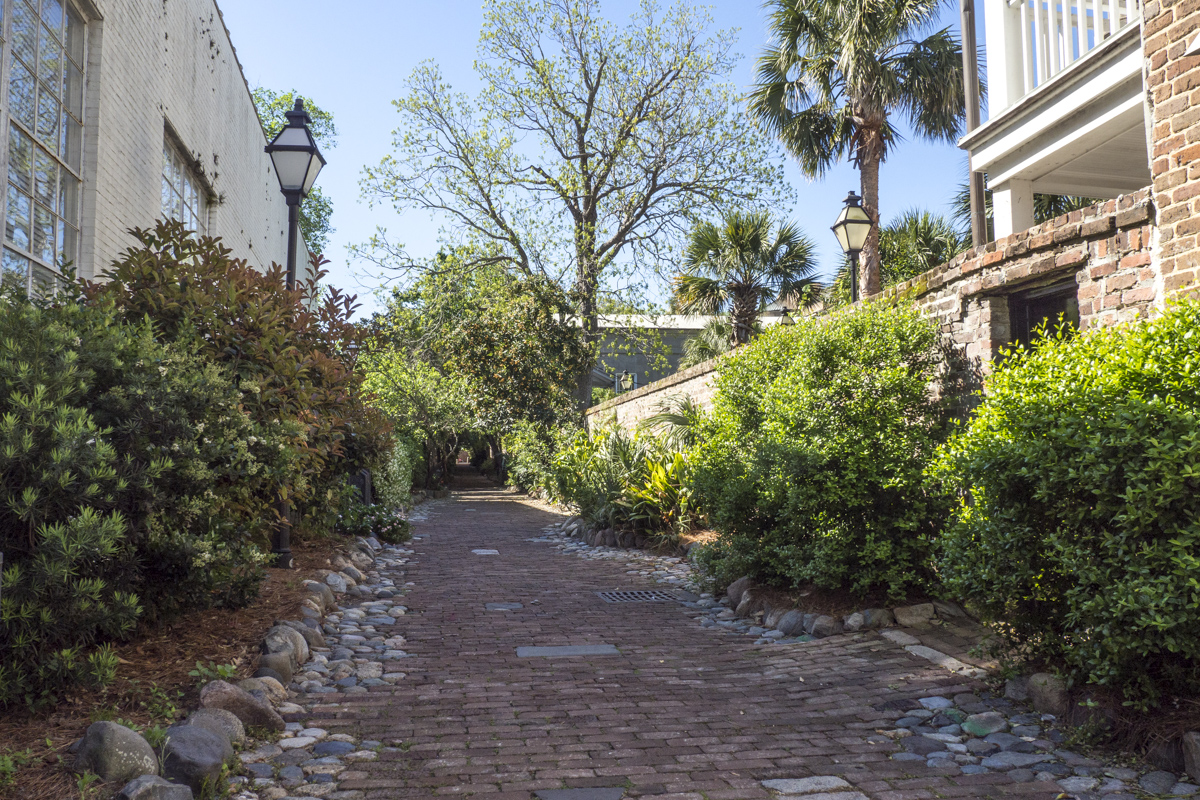 I was strolling along Anson Street when I met Jack, a carriage horse having a break outside the barn that houses the horses of Old South Carriage. I stopped to take a photograph and was soon deep in conversation with Briannon, his driver. The Old South Carriage drivers wear distinctive red sashes and boaters. Briannon told me that on average the horses do four tours a day and in high season they are limited to a maximum of six tours. It seems Jack has decided the maximum is four whatever the season and gives Briannon a hard time by trying to turn back at the start of the fifth tour and trying to gallop down the home run at the end of the sixth tour. After speaking to Briannon I went inside the barn to see the horses in there. Some of them were munching a meal and others were getting ready to go out again. I watched one luxuriating in a cooling hose down before it was time to move on. 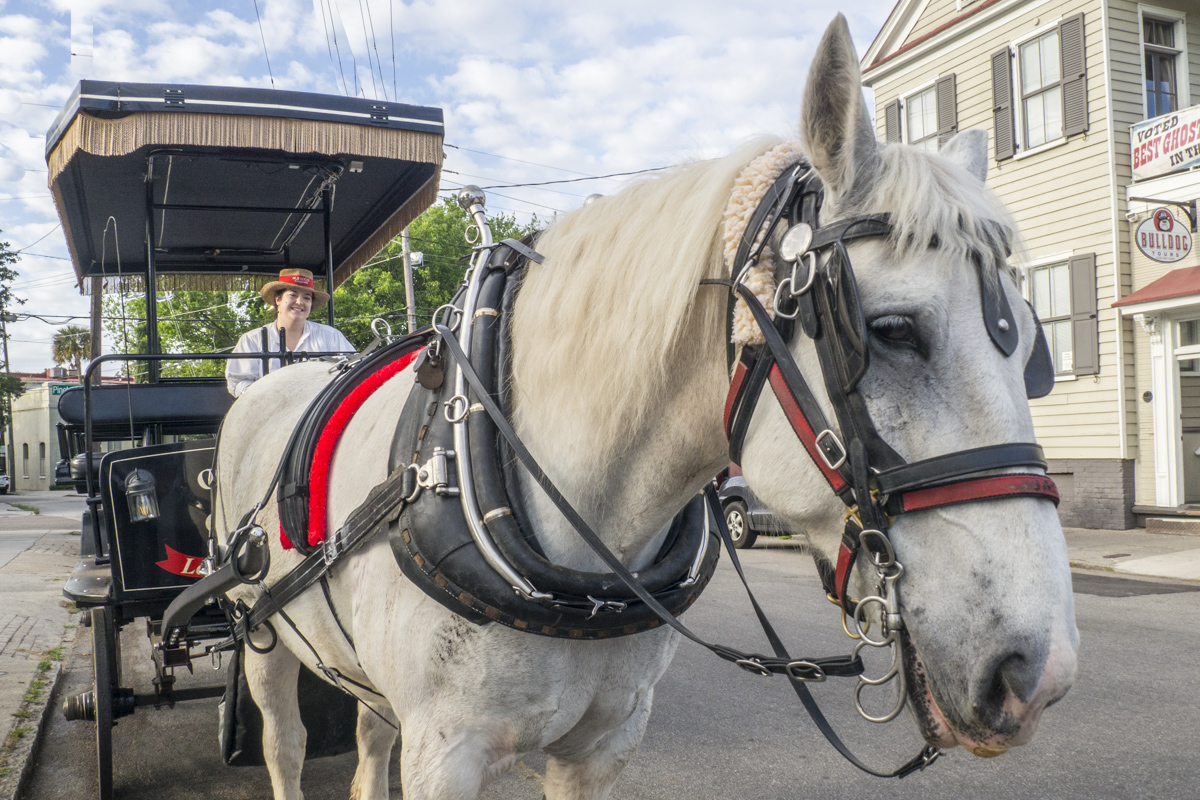 Jack, a Carriage Horse with Briannon in Charleston

A Festival of Houses and Gardens in Charleston

Whereas some of the historic houses in Charleston are always open to the public others are only open on appointment or during the regular festivals organised by the Historic Charleston Foundation responsible for promoting the houses and gardens of Charleston. The Nathanial Russell House Museum is always open to the public. Recognised as one of America’s most important neoclassical structures, this house was completed in 1808 by Nathaniel Russell a wealthy merchant. The ground floor of this house was used for business. Most of his wealth came from the exportation of staples such as Carolina Gold rice, indigo, tobacco and cotton but he also participated in the African slave trade both before and after the American Revolution. During his occupation of the house eighteen African slaves lived there and looked after the property. The house was used as a private home until 1955 apart from a period of thirty-five years when it was used as a school. It was bought by Historic Charleston in 1955 and it was opened to the public. Restored to its original splendour this house is particularly noteworthy for its graceful, free-flying, three-story staircase with each cantilevered step supporting the one above and below it. 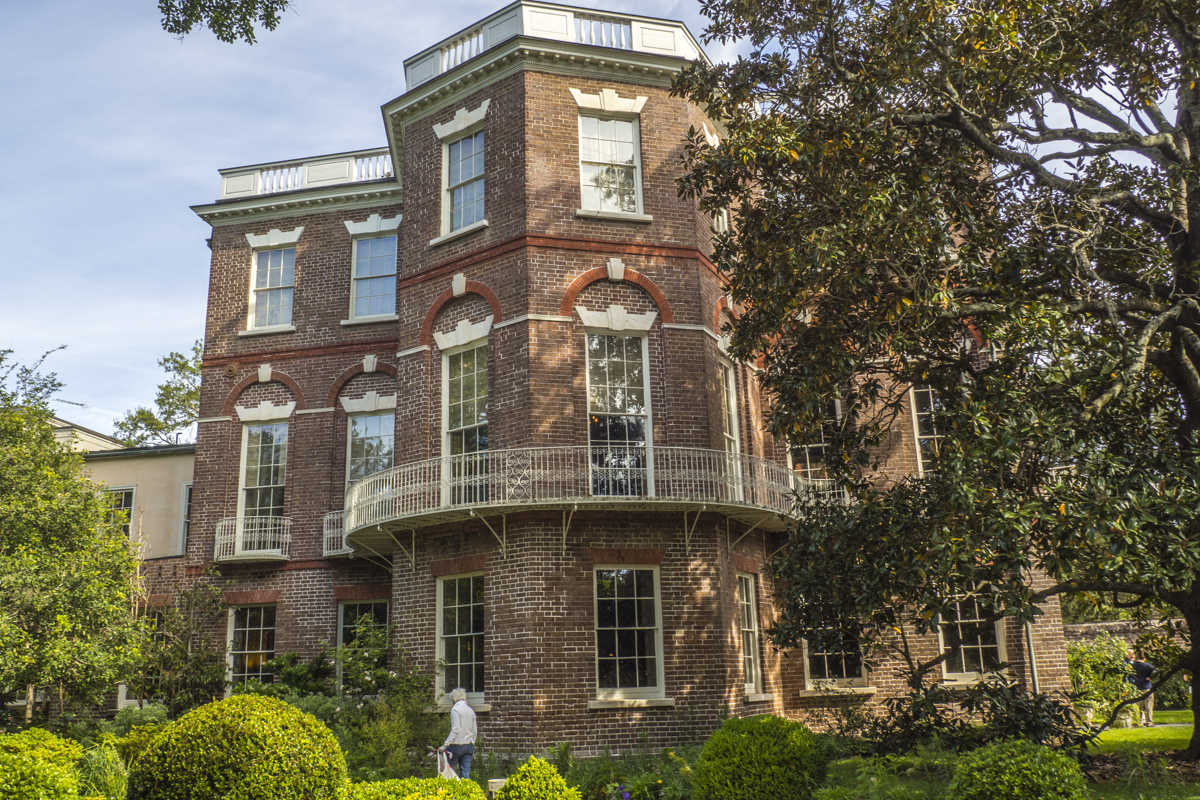 While exploring houses in Charleston visitors should look out for the carved pineapples at the entrance to some houses The pineapple has been a symbol of hospitality since colonial days. According to legend, when a sea captain came home with some exotic fruits he would display a pineapple outside his house. This was a sign that he was back home safely and visitors were welcome to his house to enjoy his hospitality and listen to tales of his adventures. The rope is an ancient Chinese symbol for a merchant and houses that once belonged to merchants often have carved rope designs around their windows and doors. The Nathaniel Ingraham House on Water Street has these rope designs around the windows and also on the roof. This Regency house is only open by appointment and during the festivals. 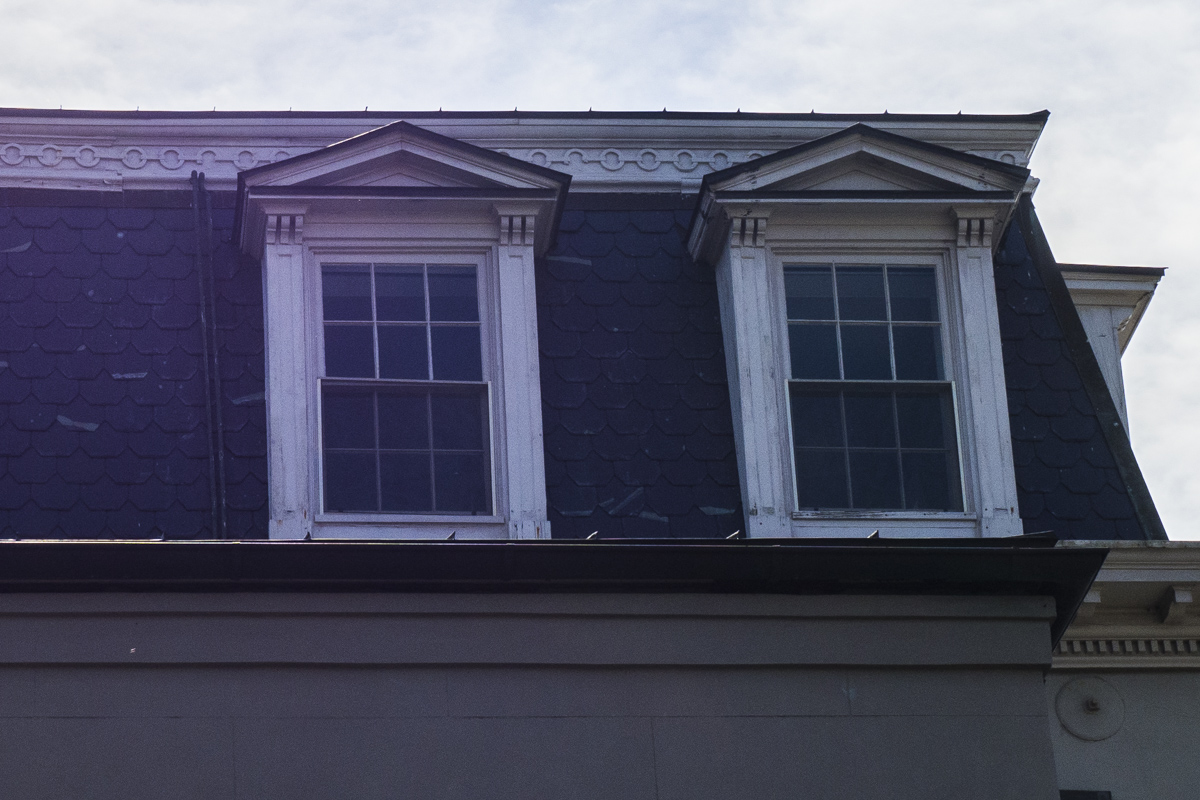 The Roof of the Nathaniel Ingraham House

Described as quintessential Charleston, Mrs Whaley’s Garden on Church Street is, reputedly, the most visited private garden in America. Also open during festivals and by appointment this pretty, very English garden, is charming. When it was first created by the renowned landscape architect, Loutrel Briggs, it reflected the Charlestonian tradition of creating garden rooms bordered by low hedges with a centre lawn. This garden is also the subject of a book, Mrs Whaley and her Charleston Garden. A timeless treatise explaining how to create a garden and cultivate a practical personal philosophy at the same time. 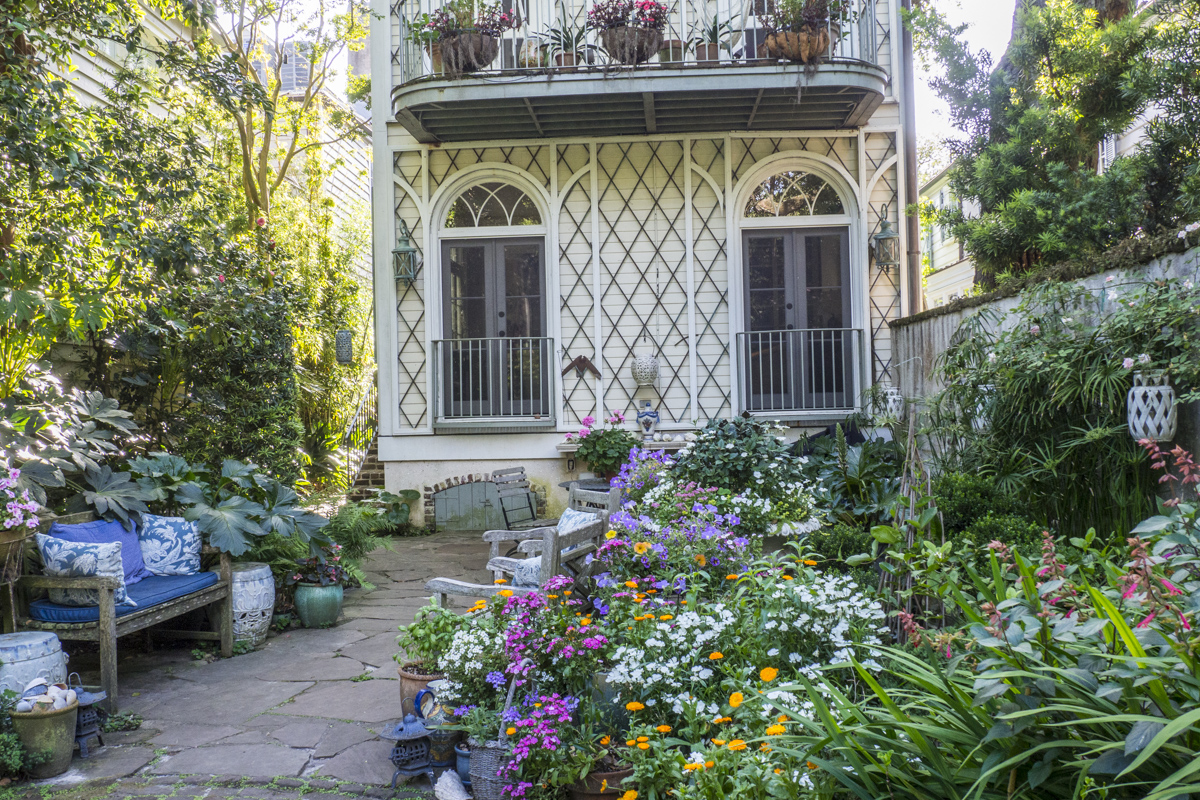 The Battery and White Point Garden in Charleston

The Battery is a long promenade around the southernmost tip of the Charleston peninsula. It has taken this name from the days when guns were lined up there to defend the city. Today it is a wonderful walk with mansions on one side and a vast expanse of water – the meeting of the Ashley and Cooper estuaries – on the other. I stopped to watch pelicans fishing. After flying elegantly over the water they fold themselves up and plummet into the water. A few seconds later they are bobbing on the surface examining the contents of the catch in their beaks. As I watched a flapping tail alerted me to the presence of dolphins as well. It was magical.

The View from The Battery

At the far end of The Battery the White Point Garden features some revolutionary and Civil War cannons (although one of them is a replica) and a gazebo-like bandstand known as the Williams Music Pavilion. The latter was built by Mrs Martha W Carrington in 1907 as a memorial to her parents. There are other memorials to the history of the town and the Hobson Memorial. This sun dial, designed by the sculptor William Henry Deacy was erected in the memory of 167 sailors killed with the USS Hobson and the USS Wasp collided off the coast of the Azores. 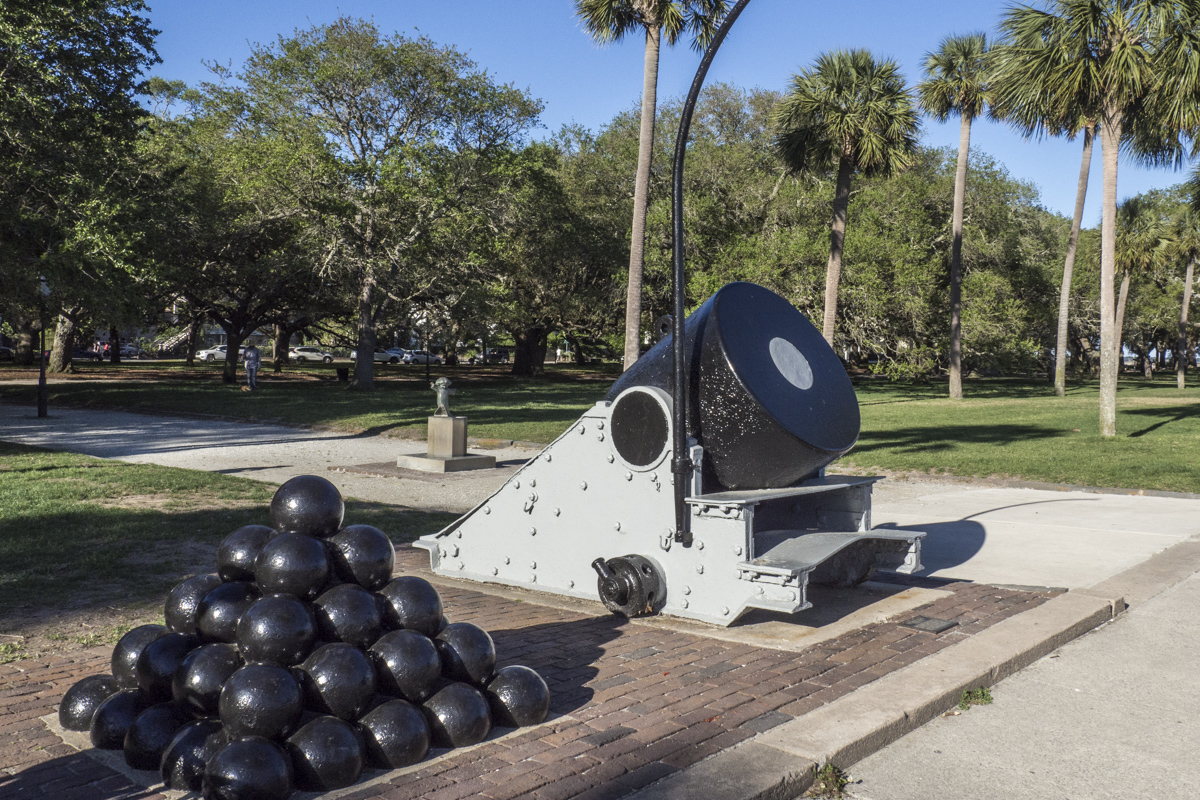 A Museum and A Contemporary Art Gallery in Charleston

Charleston Museum was founded in 1773 and is believed to be the first museum in North America. Today it’s important collections, including an historical herbarium and the complete skeleton of an Atlantic Right Whale are housed in a large modern building. This museum has the most comprehensive collection relating to South Carolina in the country. 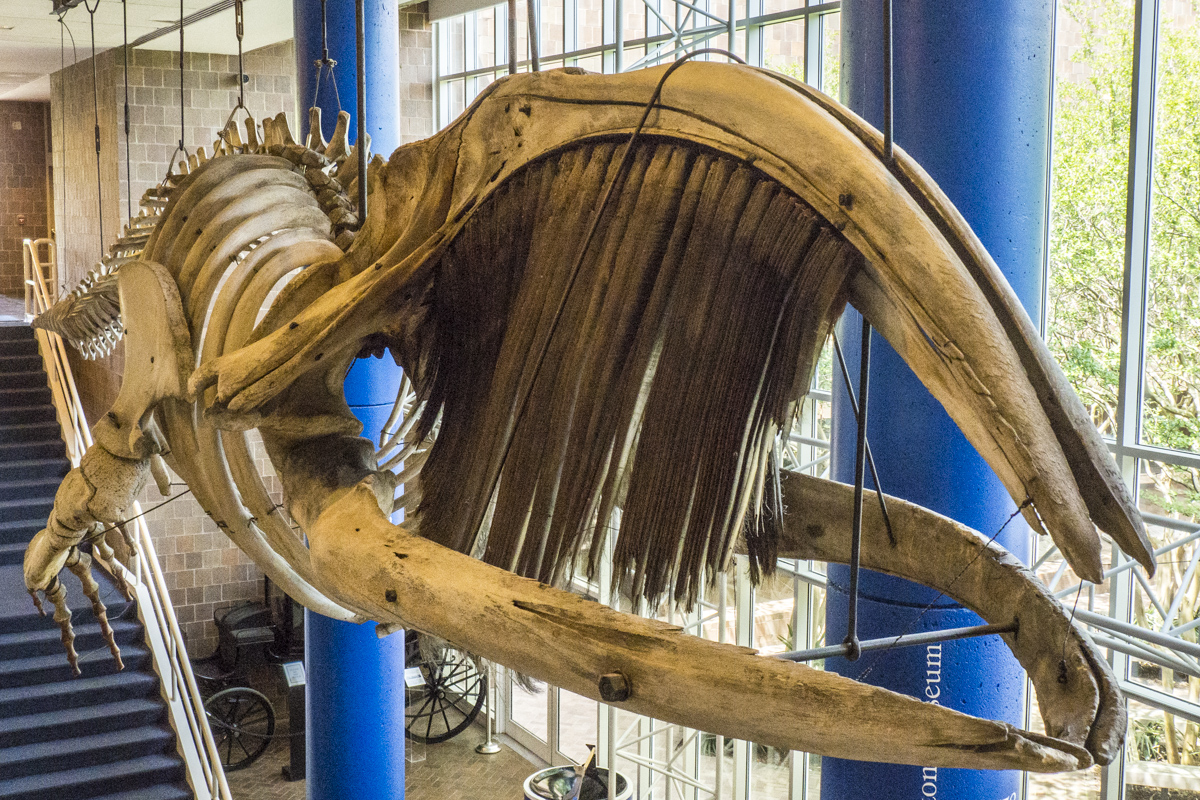 Atlantic Right Whale Skeleton in the Charleston Museum in Charleston

Charleston Museum includes the Joseph Manigault House next door to it. The original owner to the house was Joseph Manigault, a French Huguenot who escaped to America to avoid persecution in France. Thanks to his prosperous rice plantations, he was able to build this impressive townhouse in the Adams or Federal style. When the house was built it was common to build the kitchen and other utilitarian rooms outside the house. This was done to avoid the risk of fire. There is a plan in the garden showing where these buildings once stood. Today many of these outbuildings have either been incorporated into the property or sold as separate residences. 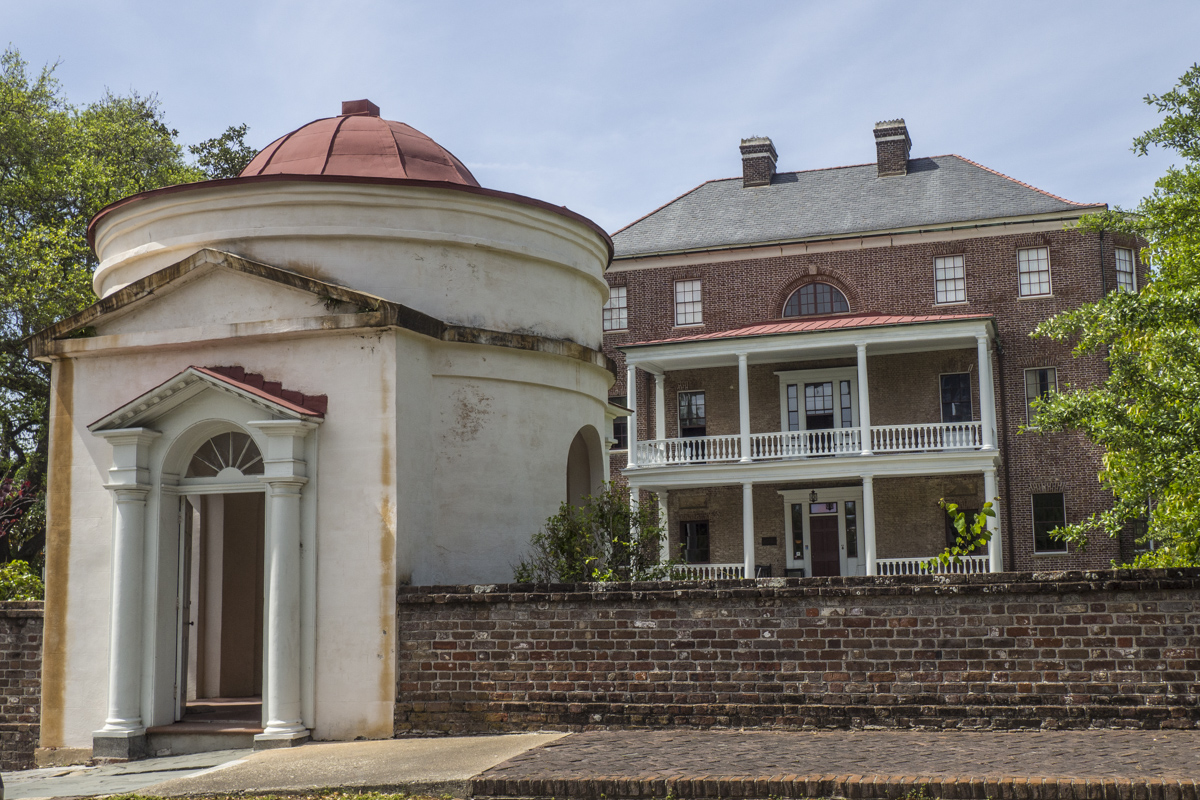 The Joseph Manigault House in Charleston

The Halsey Institute of Contemporary Art at The College of Charleston has no permanent collections. It was set up to create interactions between adventurous artists and diverse communities. It does this through unusual but fascinating temporary exhibitions. 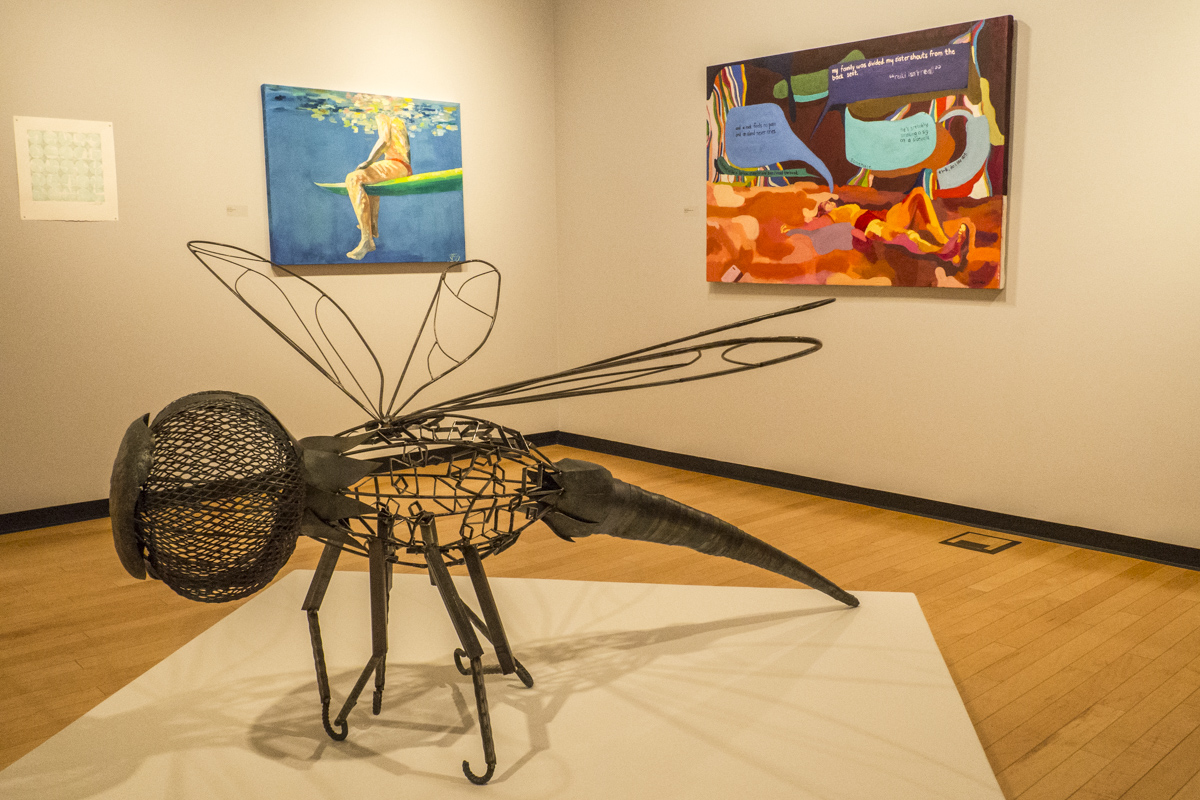 Exhibits in the Halsey Institute of Contemporary Art in Charleston

The Holy City of Charleston

At the beginning of the seventeenth century the Constitution of Carolina guaranteed settlers religious liberty. This meant the city was a safe haven for anyone trying to escape religious persecution including Huguenots from France. The French Huguenot Church, built in the mid-nineteenth century, is the only French Calvinist congregation in the world. This beautiful white church is built in the Greek Revival style. I was not surprised to discover that there are more than 800 churches in Charleston as there seems to be one on every corner. My own favourite was Saint Stephen’s Episcopal Church on Anson Street. I had stopped to take a photograph of its plain exterior when members of the congregation invited me inside to see the interior. I was impressed by its quiet simplicity. 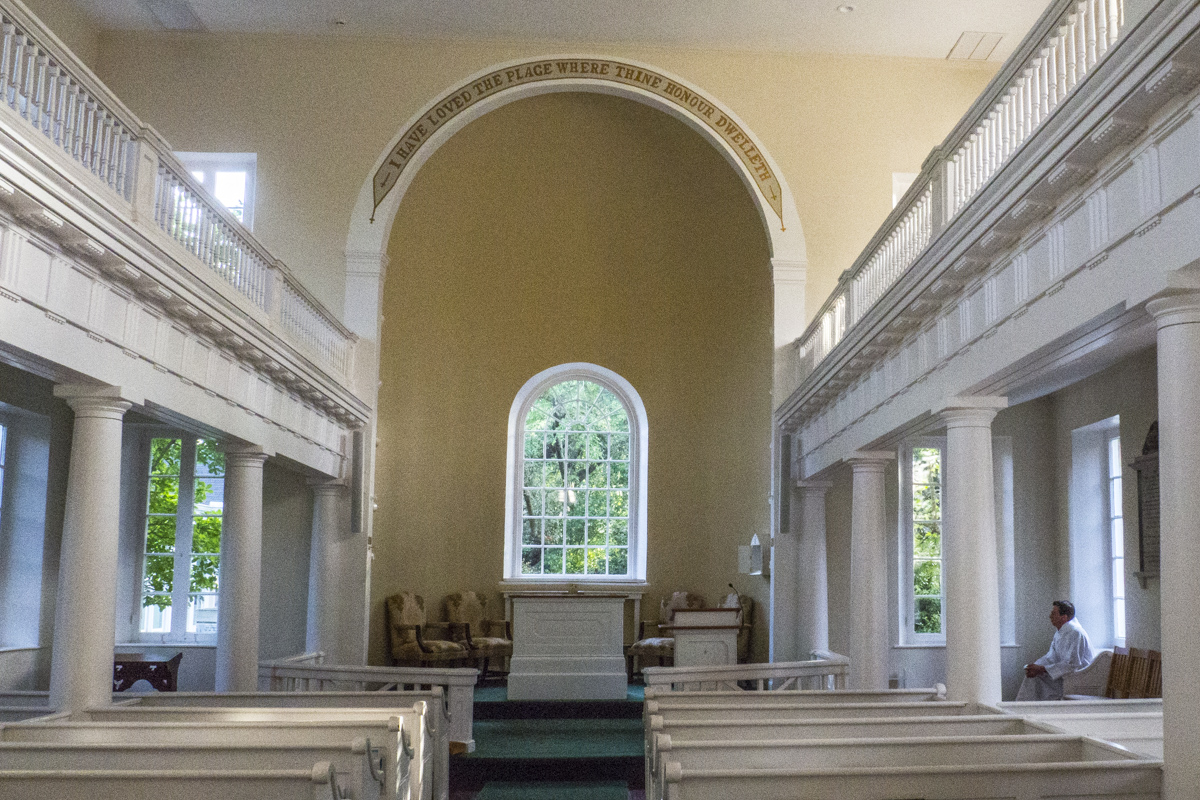 I stayed at the Bennett Hotel a luxury hotel conveniently situated in “Marion Square”: https://www.charleston-sc.com/marion-square.html. Spacious bedrooms and large bathrooms with claw-footed baths almost large enough to swim in guarantee a comfortable stay. Facilities include a roof top swimming pool with great views over the city and a boutique spa. The Gabriele Restaurant serves excellent food preceded by an aperitif in the pretty pink Champagne Bar maybe. 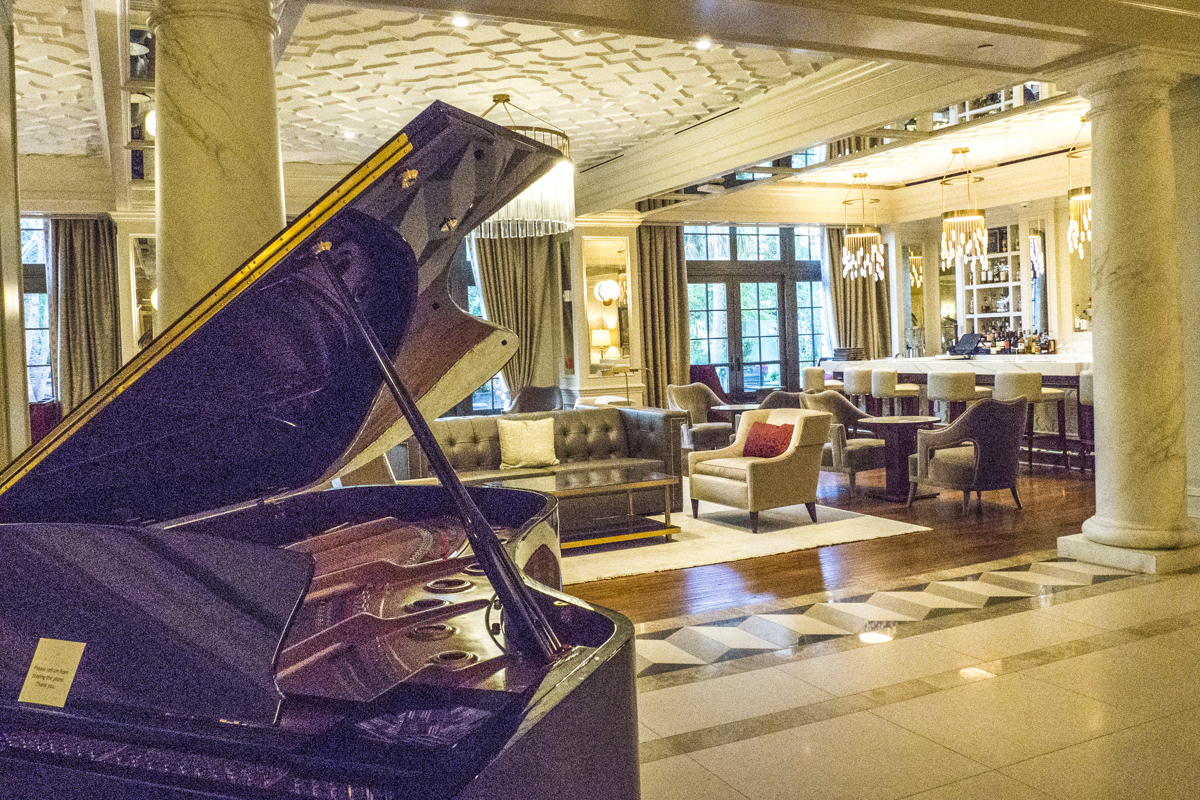 The Bar at the Bennett Hotel in Charleston

British Airways started a direct service from London Heathrow to Charleston in April 2019. There are regular shuttles from the airport to downtown Charleston.