Through the open window of my room at The Sanctuary part of the Kiawah Island Golf Resort I could hear the waves of the Atlantic Ocean pounding the beach on the far side of the hotel gardens. One of many wonderful memories.

The Kiawah Island Resort occupies the major part of Kiawah Island. This sea island, or barrier island, on the Atlantic coast of the United States is twenty-five miles southwest of Charleston in Charleston County, South Carolina. It is primarily a private beach and golf resort and renowned as a wildlife habitat offering many opportunities to enjoy this spectacular island.

Birds Flocking to the Beach on Kiawah Island

The whole of Kiawah Island has a history of private ownership which came to an end in 1974 when a resort developer purchased it and it was developed into a world-class resort and residential area. In 1993 a large portion of the island was bought by the current owners of the Kiawah Island Golf Resort who opened The Sanctuary in 2004. Throughout its development respect has been key for the natural habitats on the island and their preservation resulting in several awards and recognition by the Audubon International. The National Wildlife Federation has designated the island as a Community Wildlife Habitat – only one of three certified habitats in South Carolina and only twenty-nine in the country. It is a very special place. 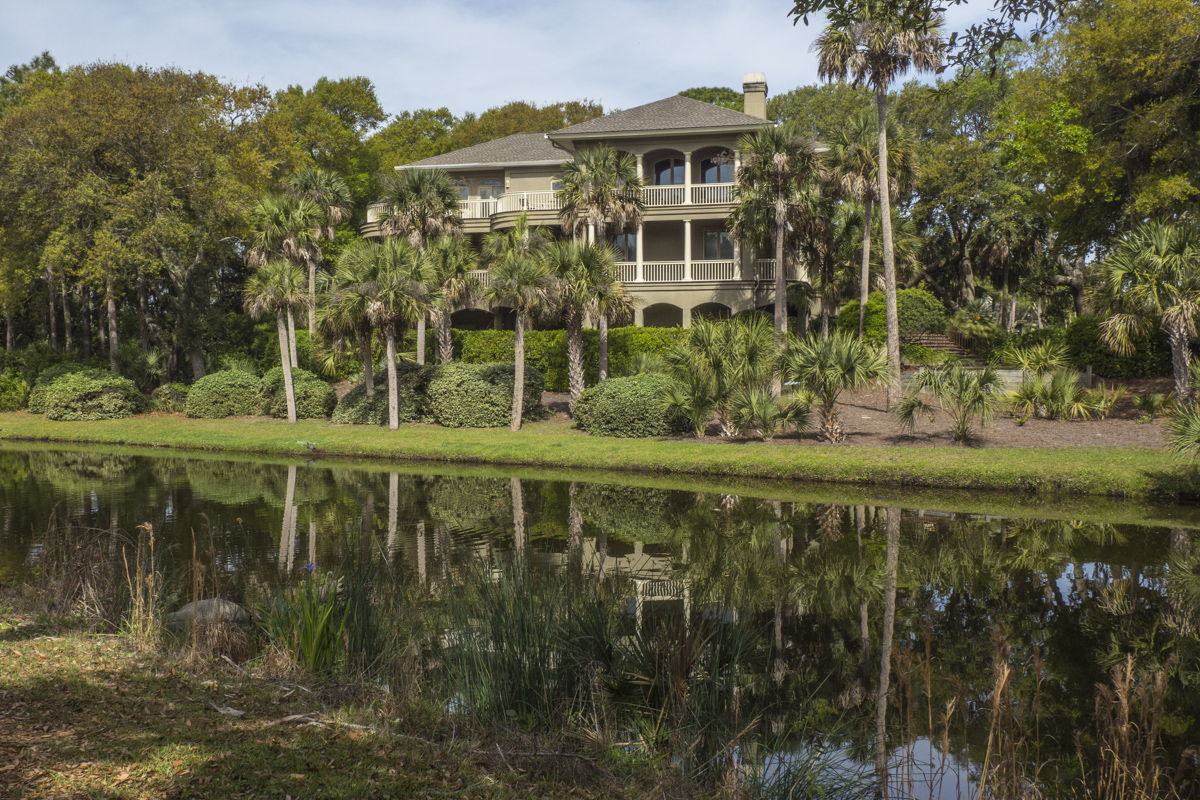 The Sanctuary on Kiawah Island

As I made my way to my room after checking in to The Sanctuary I was immediately captured by the elegance and grandeur of my surroundings. Large, linked lounges with high ceilings and splendid chandeliers lead into The Library, a delightfully old fashioned bar. I loved the wide sweeping staircases at either end of the huge hall linking the East Wing and the West Wing. If only I had packed my crinoline ball gown so that I could sweep down them in the evening on my way to dinner in one of the hotel restaurants. I felt the hotel had achieved its aim of providing old-fashioned luxury throughout including the stunning spacious bedrooms. Other amenities include a fitness centre, indoor and outdoor pools and a parade of shops. 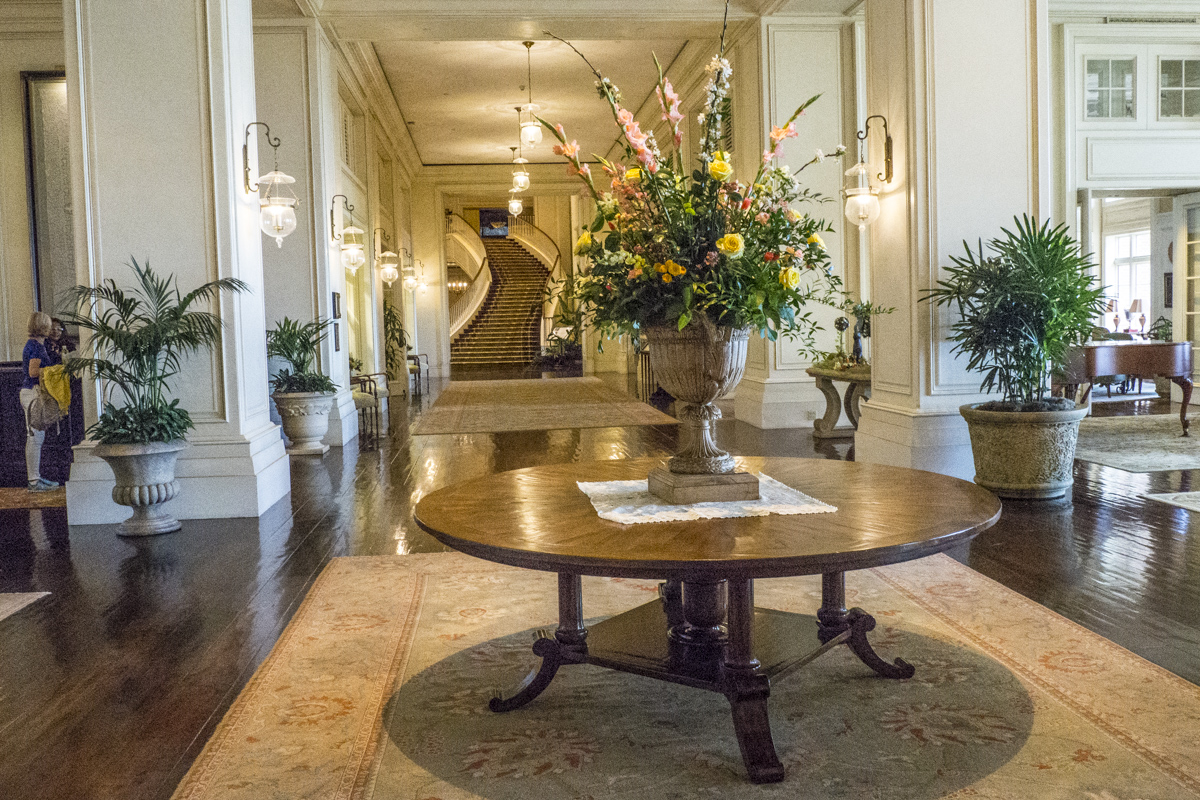 The Sanctuary on Kiawah Island

It was with some trepidation that I approached the club house of the Cougar Point clubhouse as it was at least twenty years since I last set foot on a golf course. Cougar Point is one of five golf courses on the island including the championship Ocean Course. It had been easy to arrange a game here as I was allowed on the course in trainers and sets of clubs were available to hire. Once I had checked in I was directed to the driving range where I could hit a few balls before setting off. As the buggies were lined up in starting time order I met one of my playing partners as I sorted out some clubs to practice with. Four of us were playing together, Chris, her husband Larry and their son Ryan. Fortunately, they did not take the game too seriously and as Larry was an expert in finding stray balls we were within the ‘official’ time for eighteen holes. It is a lovely course and I enjoyed the experience so much it has given me the confidence to try again sometime soon, 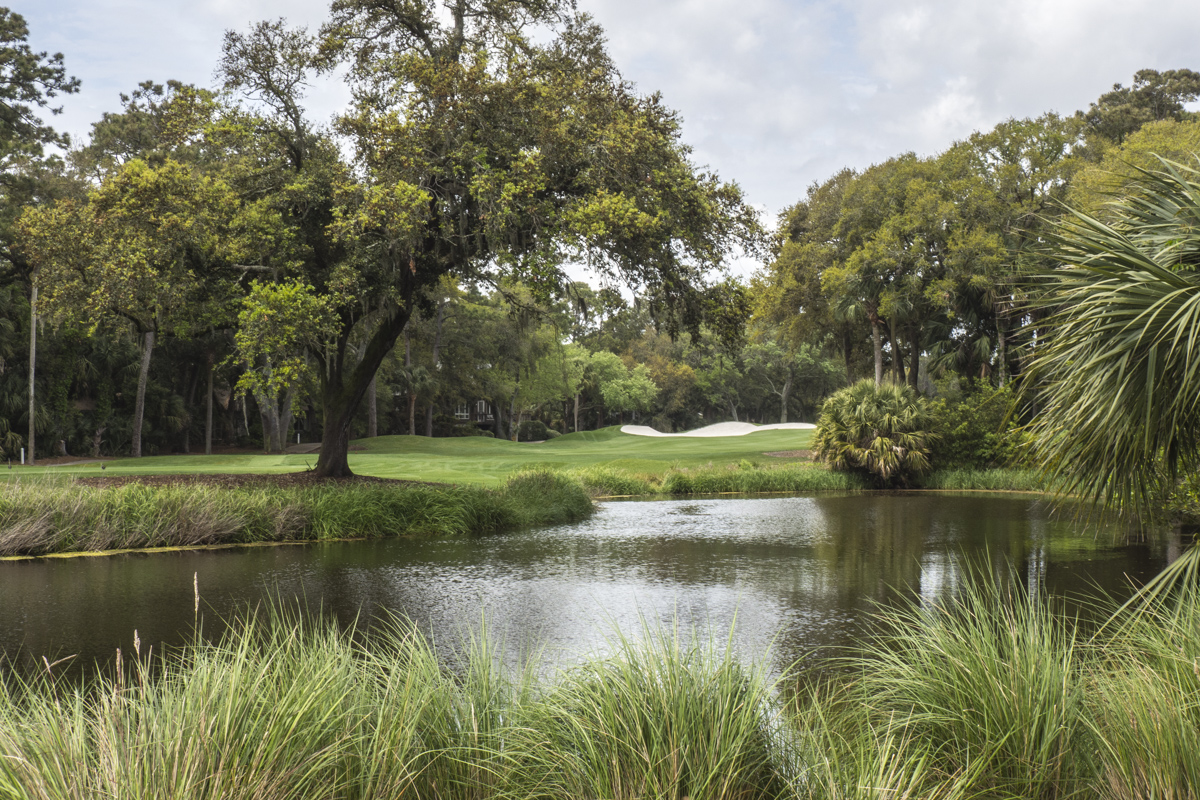 A Bike Ride on Kiawah Island

An early morning walk along a short stretch of the incredible ten-miles of beach on Kiawah Island had convinced me the best way to enjoy it was on a bicycle. On my second morning I hired a bicycle and set off along the beach. I was soon whizzing along on the hard sand the breeze in my hair and a gentle sun warming my limbs. It was just fabulous. Only one hiccup. The bikes do not have gears or brakes and back peddling slows it down. Sometimes I did not remember this and came to some very sudden halts when I stood up on the pedals intending to increase my speed. 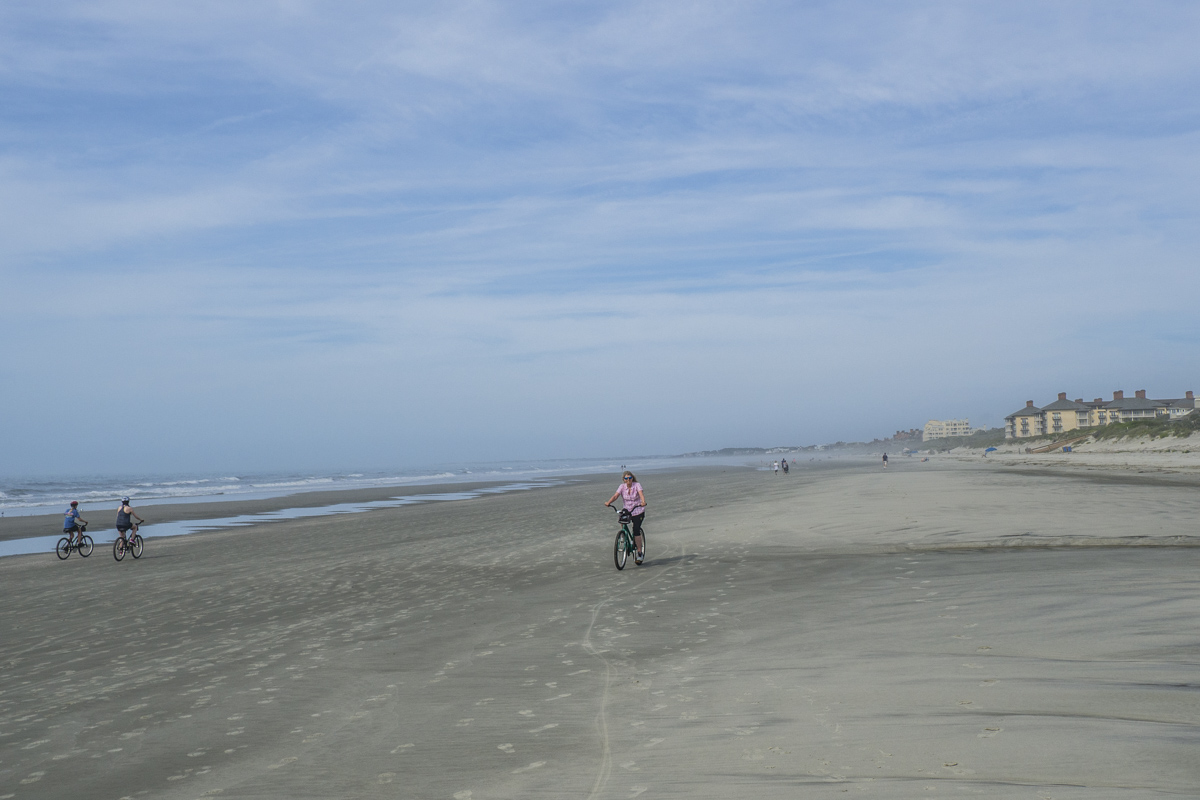 Cycling on the Beach on Kiawah Island

After cycling along the beach I left the sand behind and followed one of the cycle tracks that took me over a bridge spanning one of the many lakes on the island and into the Osprey Point golf course. Cyclists can use the buggy paths on the golf courses as well as the many cycle tracks around the island. Alligators are popular residents of this island and I saw several on my bike ride. One was sleeping on the lawn of a house, another, lying on the bank was keeping a watchful eye on me as I crept closer to take a photograph. As I was standing by a lake composing a photograph my attention was drawn to an alligator just below the surface of the water three feet in front of me. It was so large I took one hasty photograph and fled back to my bike. 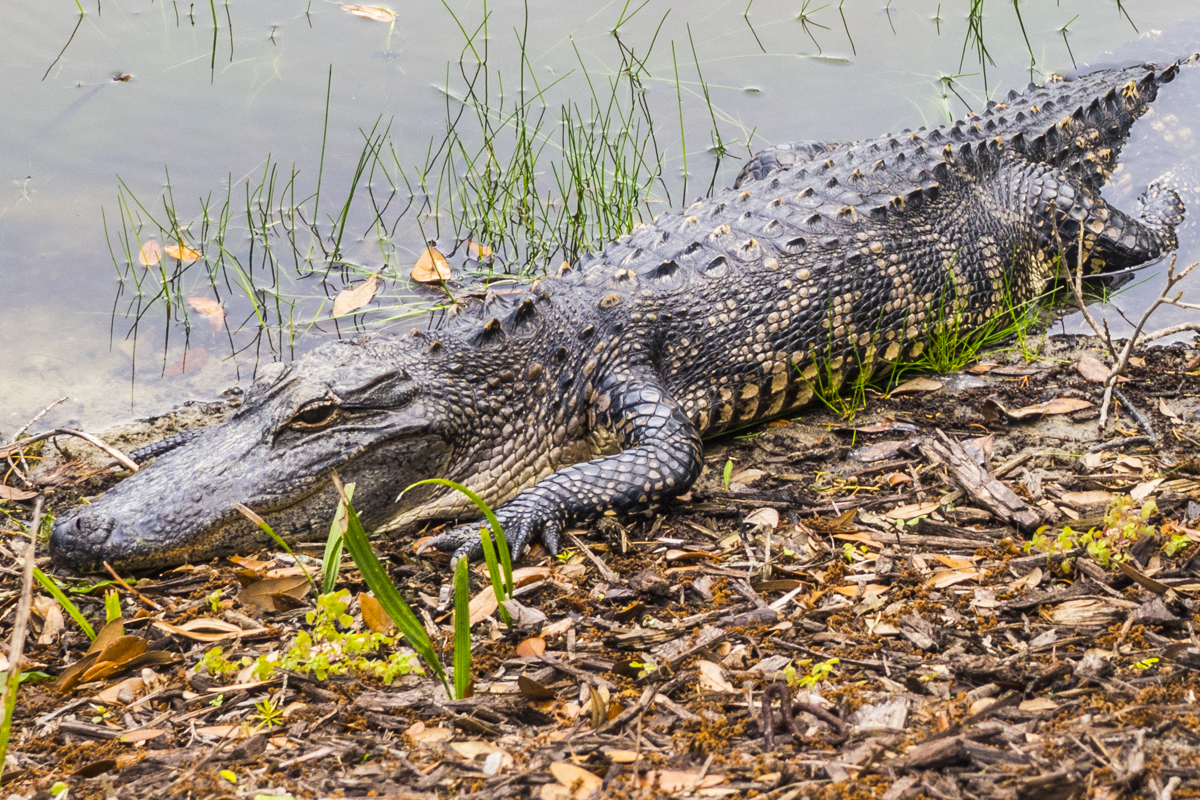 A Boat Ride on Kiawah Island

The Kiawah River flows by the salt marshes on Kiawah Island and down to the Atlantic Ocean. Boat trips are offered by The Sanctuary and I joined one of these trips that started from Mingo Point. We explored the creeks that penetrate the salt marshes and admired the grand residences on their banks. Extreme weather conditions mean these expensive houses are subject to self-insurance only and if they are blown down the owners simply re-build them. We watched cormorants diving and then drying themselves, wings spread wide, in the sun. A real highlight was a sighting of dolphins indulging in some tail slapping. Our boatman said this was either to stun the fish they were hunting or a sign that they were annoyed at our presence. We kept a respectful distance just enjoying the spectacle of these elegant creatures.

Some Spa Time on Kiawah Island

The Sanctuary Hotel features a beautiful Spa offering a wide range of massages and treatments. I opted for the holistic facial which allowed me to point out any specific problems I wanted to be addressed (if possible). Having booked my treatment, I was informed this also entitled me to use the facilities of the spa. I spent some time before my treatment making use of the steam room and the sauna before wallowing in the Jacuzzi for a while. After showering and washing my hair I had time to sip come herbal tea and enjoy some fresh blueberries in the Solarium before Jennifer collected me for my treatment. I emerged feeling very relaxed and returned to the Solarium to chill out for a while (and eat some of their delicious granola). When I finally left I really felt as though my face was glowing, a very pleasing experience. 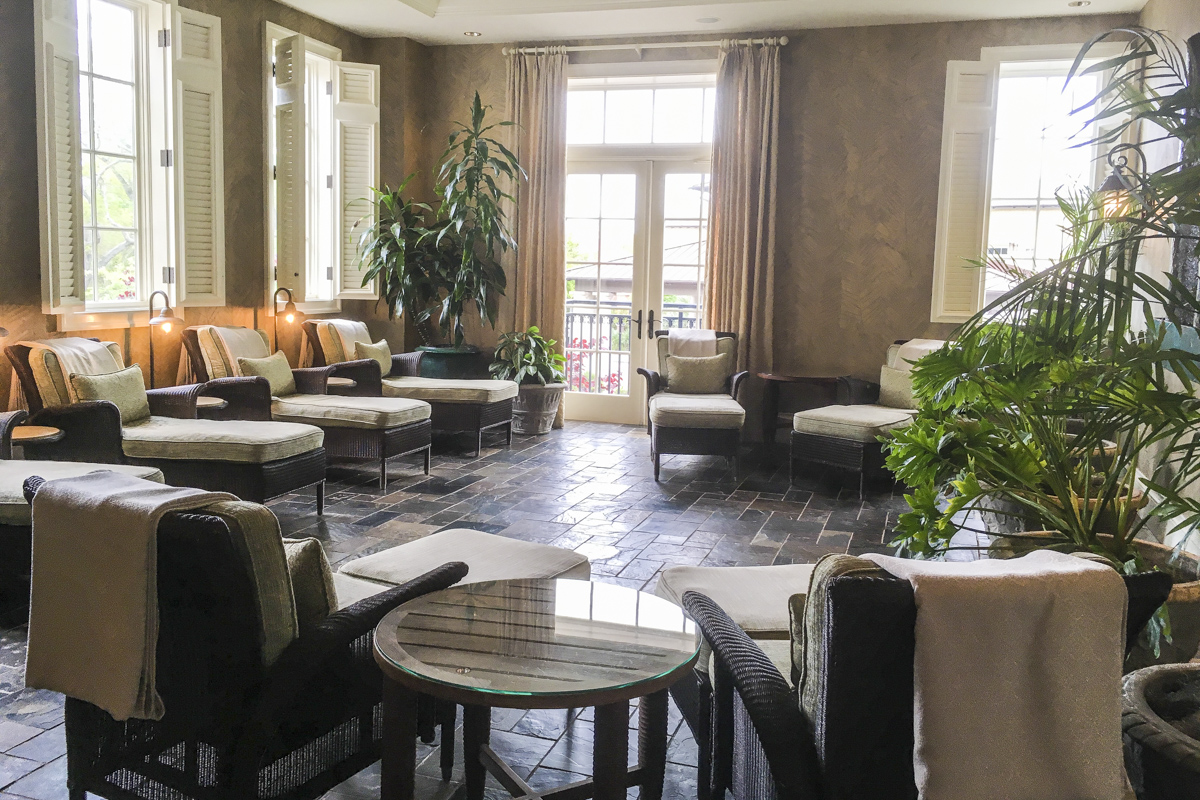 The resort offers a good variety of dining opportunities from the cheerful Cherrywood Barbecue and Ale House in the Osprey Point clubhouse to the Jasmine Porch and Ocean Room restaurants in the Sanctuary Hotel. I had an early breakfast every morning sitting on the terrace outside the Jasmine Porch Restaurant. The service in the restaurant was very good and the staff were very courteous and attentive. The choice included the breakfast buffet or dishes from the menu. I chose the healthy options on the menu and feasted on delicious fresh berries with porridge each morning – accompanied by a choice of fresh juices and as many cups of coffee as I could manage. It was a great start to my day. 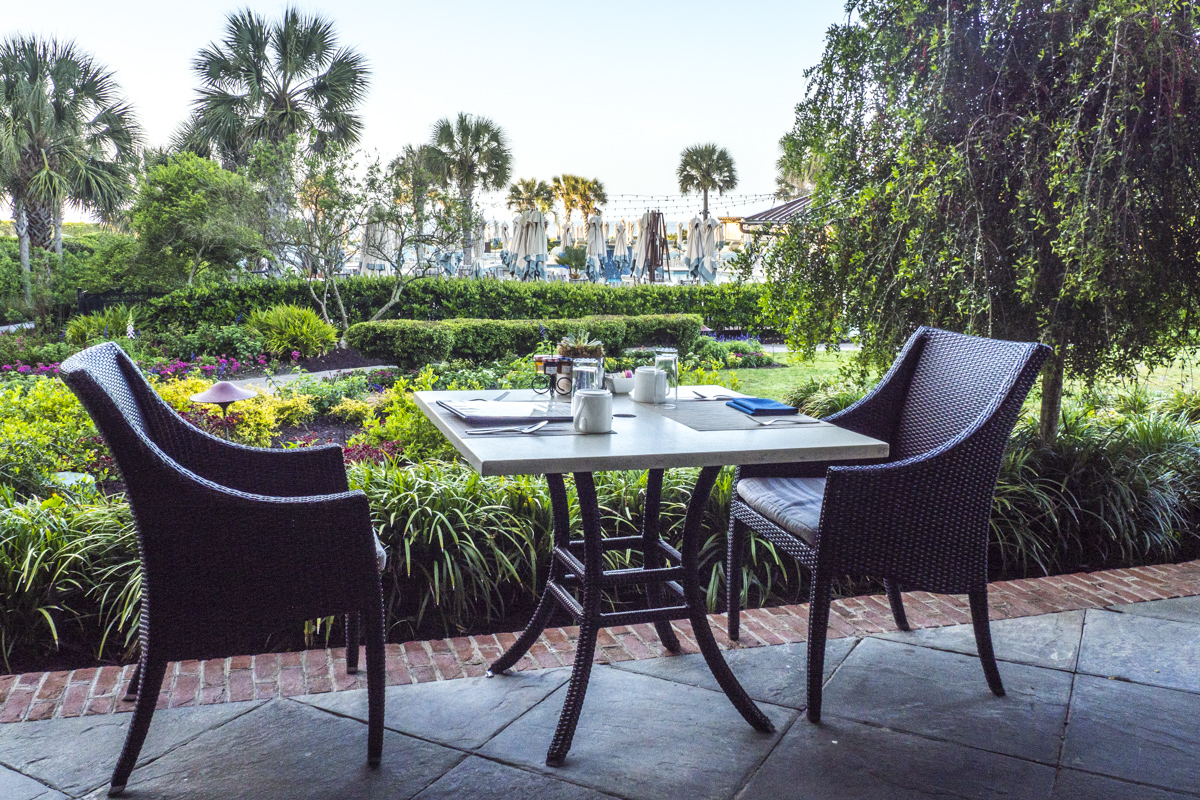 The Ocean Room offers fine dining and it certainly lived up to its reputation. Erica, the sommelier, chose our wines after we had selected our dishes from the menu. Synchronised serving meant every guest at the table received their meal at the same time. Gregg, the head waiter, was both entertaining and informative and made each dish sound so delicious that I changed my mind after every description. The food was delicious and after three courses Gregg persuaded us all to try a digestive drink, Underberg, that arrived in a small bottle wrapped in brown paper. Was it my imagination or did it really work? I certainly did not feel as full as I should have done after all the sumptuous food I had eaten. 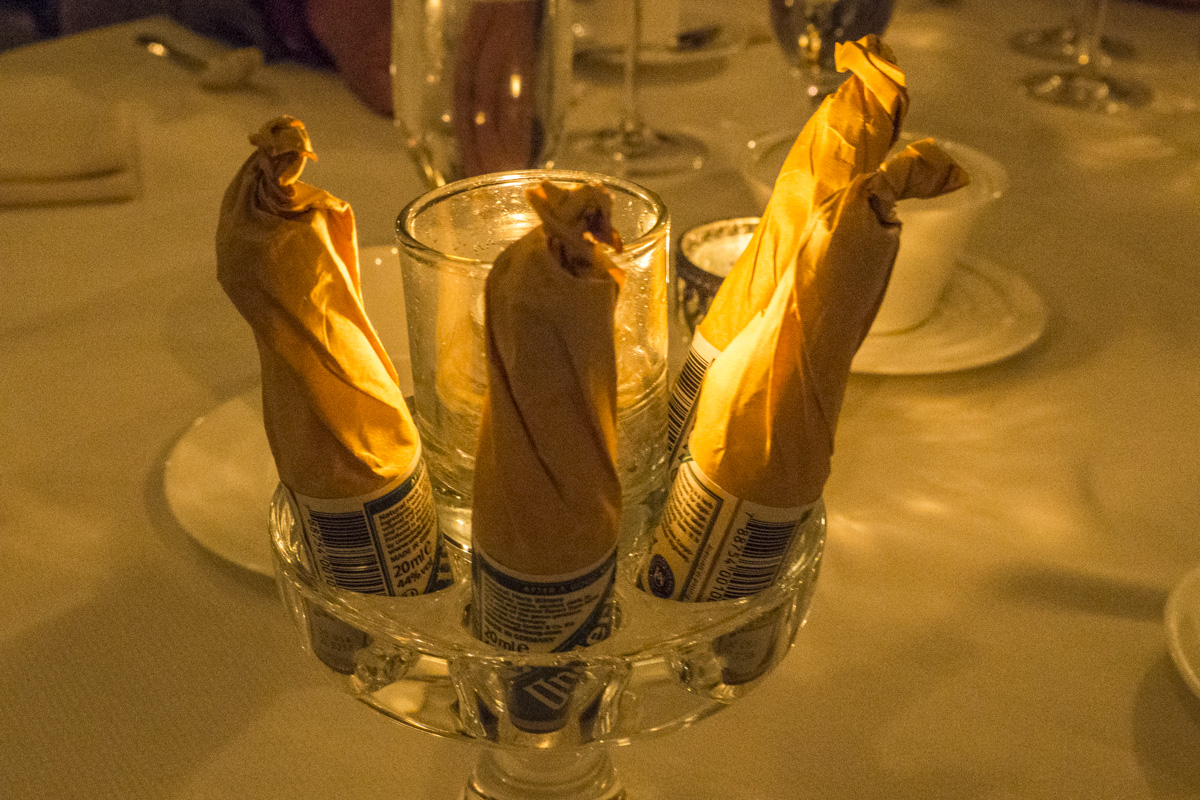 Dining in the Ocean Room at The Sanctuary on Kiawah Island

As British Airways had recently started a direct service from London Heathrow to Charleston I was able to take advantage of this. It is a forty-minute drive from Charleston airport to the Kiawah Island resort and airport shuttles can be booked through the Sanctuary Hotel